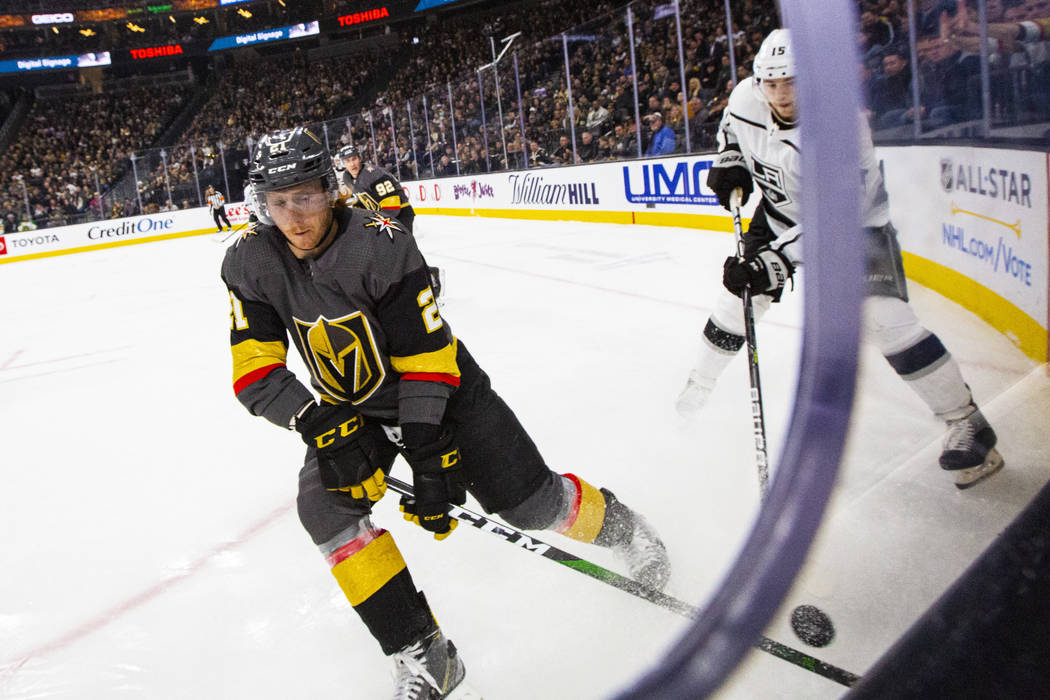 Cody Eakin will always have a unique place in Golden Knights history thanks to one play.

The center was involved in the franchise’s most controversial moment to date during the Western Conference quarterfinals last spring, helping to make him a sympathetic figure last offseason.

But with his contract weighing down the payroll ahead of the trade deadline, the Knights flipped Eakin to the Winnipeg Jets on Friday to clear salary cap space.

In exchange for the underperforming 28-year-old, the Knights received a conditional fourth-round in 2021 that becomes a third-round pick if the Jets reach the postseason or re-sign Eakin on or before July 5.

The Knights were off Friday and general manager Kelly McCrimmon is expected to address the move following Saturday’s morning skate.

“He’s one of the original misfits that went to the Stanley Cup Final and surprised everybody, so he’ll always be warmly regarded here in Vegas,” Knights TV studio analyst Darren Eliot said on SiriusXM NHL Network radio. “This season, he really has not been much of a factor. Doesn’t mean his skills are diminished, it just has been one of those kinds of seasons.”

Eakin, a native of Winnipeg, Manitoba, posted career highs of 22 goals and 41 points last season. But he will long be remembered for what occurred April 23, 2019.

With the Knights leading 3-0 midway through the third period of Game 7 and set to clinch their first-round series against the rival Sharks, Eakin was given a five-minute major penalty for cross-checking when San Jose’s Joe Pavelski was injured after a faceoff.

Replays showed Eakin’s stick made contact with Pavelski’s chest and knocked him off balance, causing Pavelski to hit the side of his head on the ice.

The Sharks scored four times during the ensuing power play and went on to a 5-4 overtime victory to advance.

The NHL later apologized to the Knights for the incorrect call and changed its rulebook last summer to require referees to use video review for all major and match penalties.

Eakin is set to become an unrestricted free agent after the season, and his $3.85 million salary cap hit has been a target for criticism since last summer, when the Knights were unable to afford winger Nikita Gusev and traded him to New Jersey.

With Eakin’s contract off the books, McCrimmon has $6.375 million in projected salary cap space ahead of Monday’s deadline, according to CapFriendly.com. That doesn’t account for Friday’s call-ups of Gage Quinney or Zach Whitecloud.

There was no salary retained in the Cody Eakin trade, so Vegas just freed up cap space that can be put to use in another deal. #SNTrade

The Knights could add another piece on the blue line and are reportedly kicking the tires on Toronto defenseman Tyson Barrie, who will be an unrestricted free agent.

Chicago’s Erik Gustafsson also remains a possibility, according to a source. Gustafsson, a pending unrestricted free agent as well, was held out of Friday’s game as a precaution ahead of the deadline.

More Trade Bait talk on @SportsCentre– I believe at least 4 teams have shown interest so far in #Leafs pending UFA Tyson Barrie: #Canucks , #Flames , #VegasBorn , #LetsGoCanes. Only way Barrie gets dealt is if TOR finds better fit on D, or gets pieces to flip for that better fit.

Eakin’s departure also paves the way for Chandler Stephenson to return to center and opens a roster spot for forward Nicolas Roy.

“Cody was someone that really intrigued the coaches from the moment I brought his name up for the first time,” said Winnipeg general manager Kevin Cheveldayoff during a conference call. “Cody is the type of guy who oozes character. He’s had tremendous playoff experience over the last couple of years. (He’s a) tremendous character person, brings guys into the fight with how he plays and then the energy and leadership that he brings. I’m real excited to add a player like that into our locker room and on the ice.

“I’m excited about getting Cody Eakin the hockey player, regardless of where he’s from,” Cheveldayoff said. That really factored in more than anything for us. The fact he’s from Winnipeg is a nice maybe sideline. The fact he’s the type of player that he is is why we got him.”

Eakin missed the first four games of the season and was sidelined for 17 games after taking a hit to the head from Arizona’s Brad Richardson on Nov. 29.

He assisted on newly acquired Alec Martinez’s goal Thursday against Tampa Bay and has four goals and 10 points in 41 games.

Eakin posted 37 goals and 41 assists in 199 games during his career with the Knights.

The Knights face Eakin and the Jets on March 6 and 29 in Winnipeg.