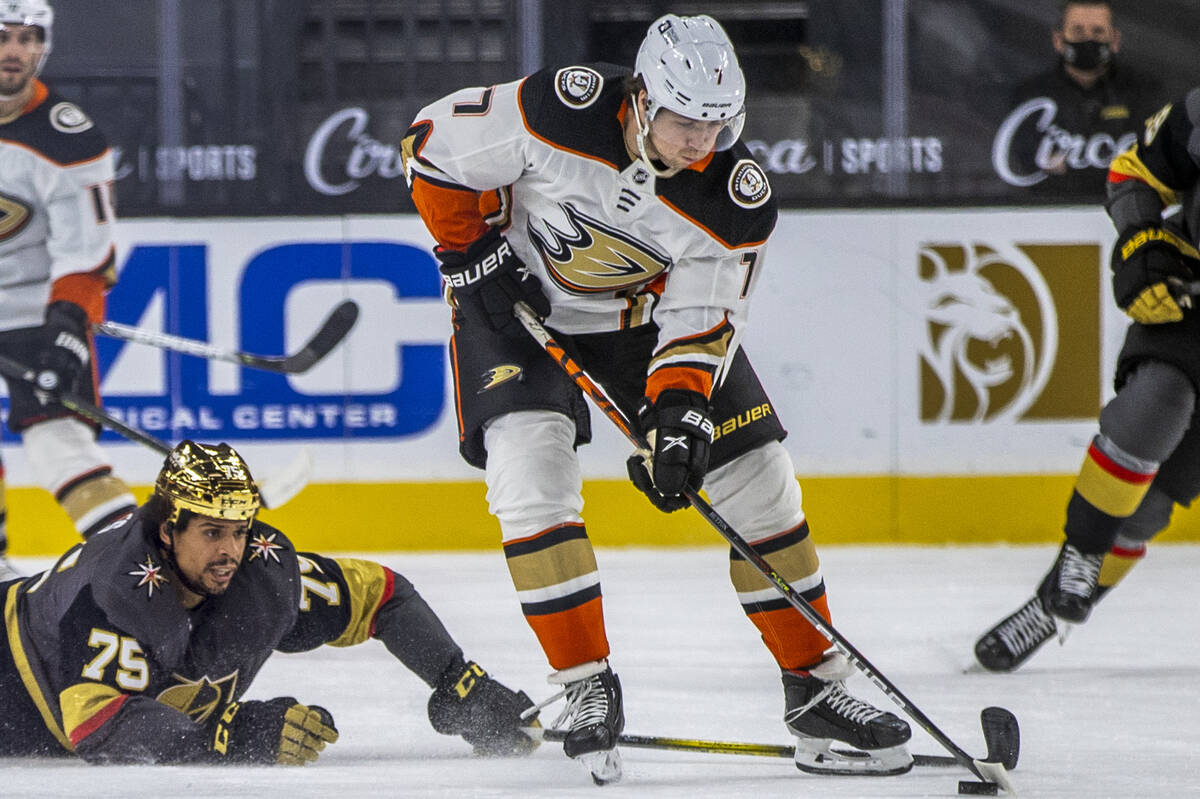 Golden Knights right wing Ryan Reaves (75) looks on from the ice after Anaheim Ducks defenseman Ben Hutton (7) takes the puck away during the second period of an NHL game at the T-Mobile Arena on Thursday, Feb. 11, 2021, in Las Vegas. (L.E. Baskow/Las Vegas Review-Journal) @Left_Eye_Images

Ben Hutton was signed by the Golden Knights to provide depth on the blue line while the organization’s young defensemen develop in the minors.

He also brings the happy-to-be-there approach that is required for the role.

Hutton laughed when asked about his dance moves from a 2016 viral video, and his enthusiasm was obvious after he signed a one-year contract with the Knights last week.

”I definitely think I have something to prove,” Hutton said. “I think I came off a bit of a down year. But with that being said, I’m looking forward to coming in here and reinventing myself.”

Hutton, 28, split last season between Anaheim and Toronto, producing five points in 38 games combined. He has appeared in 379 NHL games during his six-year career.

The Ducks signed Hutton to a professional tryout agreement during training camp, but released him before the start of the regular season.

“I think when you look around the league, the condensed schedule, it’s a war of attrition here and we’re already in the middle of it,” coach Pete DeBoer said. “You can’t have enough NHL players and he’s an NHL player. The more of those around, the better, and I think we’re going to need them all as we go forward here.”

Hutton was a fifth-round pick by Vancouver in 2012 and spent four seasons at the University of Maine before turning pro. During his rookie season, Hutton performed a lip sync of the song “Barbie Girl” at a charity event, and the video of that continues to make the rounds on the internet.

Hutton was more than willing to poke fun at himself for the act and showed the same happy-go-lucky attitude exhibited by predecessors Brad Hunt and Nick Holden.

“I don’t know if I’m going to get challenged to a couple dance-offs or what’s going to go on,” Hutton said.

Hutton, who wears No. 17, described himself as a “first-pass-out-of-the-zone” defenseman who can provide offense if necessary. He has yet to appear for the Knights but could be needed on the current four-game road trip.

“It’s not like a young guy coming in that’s deer in the headlights,” DeBoer said. “He gets it. When you talk hockey with him, which we’ve had a couple conversations, I don’t think it’s going to take long.”

Forward Michael Amadio had a busy 48 hours after he was claimed by the Knights off waivers and practiced with the team for the first time Sunday in Toronto. His transition was made easier by a pair of former teammates.

Amadio spent parts of four seasons with the Los Angeles Kings and overlapped with defenseman Alec Martinez and Hutton during the 2019-20 season.

“It’s nice having a couple familiar faces around,” Amadio said.

Amadio, 25, played three games for Toronto this season without scoring. He is expected to face his former team Tuesday with the Knights forward group decimated by injury.

“He’s going to get a great opportunity here with some of the injuries we’re dealing with,” DeBoer said. “You’re always hoping a guy like this — he has potential — that he can grab that opportunity and go with it.”