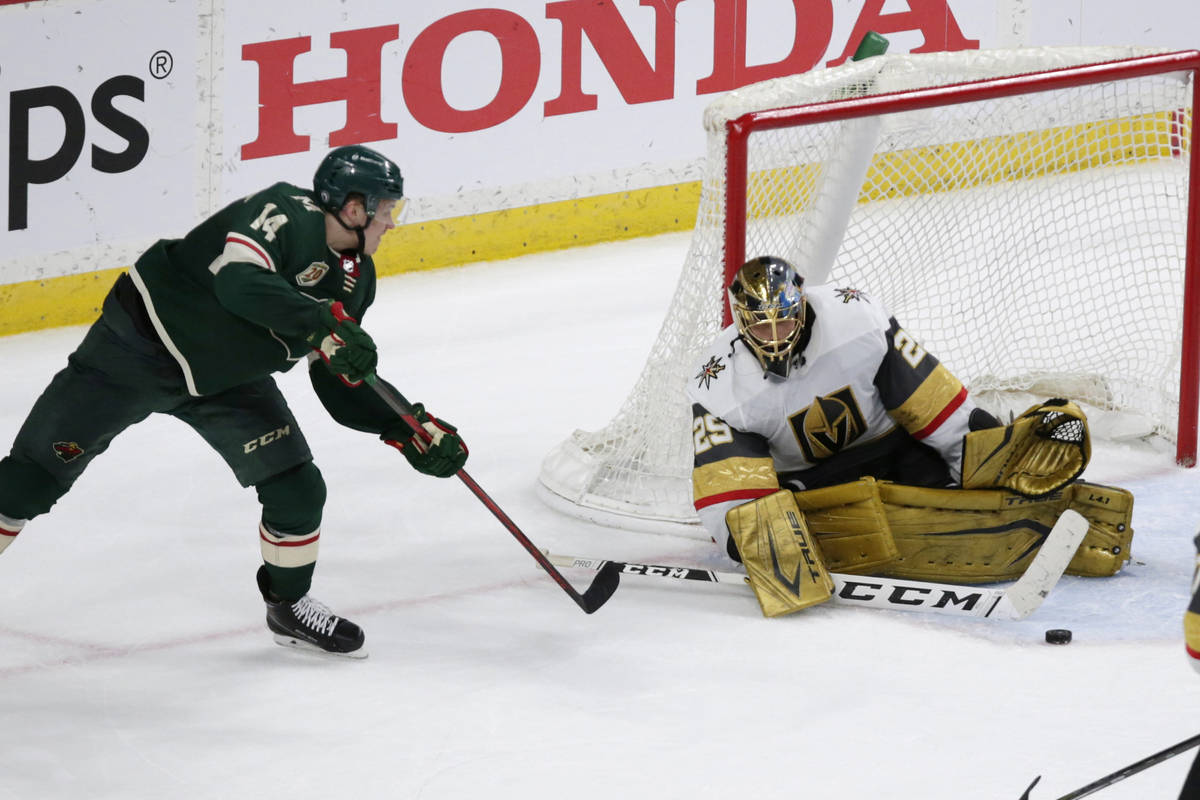 Even the pucks that go in the net aren’t resulting in goals for the Minnesota Wild.

That just about sums up how it’s going for a team that dropped its third straight game for the first time this season and trails its first-round playoff series 3-1 to the Golden Knights after a 4-0 loss Saturday at Xcel Energy Center in St. Paul, Minnesota.

“It’s frustrating,” forward Kevin Fiala said of an attack that has generated just four goals in four games despite registering plenty of shots on goal. “It’s not just the shots. I feel like it’s great opportunities that aren’t going in. So, yeah, what can I say?”

Teammate Joel Eriksson Ek is one of the few Wild players who has been able to put the puck past Knights goalie Marc-Andre Fleury, but he had a goal disallowed by a challenge for the second straight game.

On Saturday, it was a first period blast that would have tied the game seconds after the Knights had taken the lead. Coach Pete DeBoer successfully challenged again.

“It would have been good for us to get that goal, but it’s something we have to push through,” Eriksson Ek said. “We have to get back to our game. We can’t let those things affect us. We can’t do anything about it. When it’s done, it’s done. We have to come together to work even harder for a new goal.”

It never came despite the Wild putting 35 shots on goal and creating 14 high-danger chances while allowing eight.

“We’re getting those quality looks,” Wild coach Dean Evason said. “Obviously, Fleury has been phenomenal. But we were getting the same looks against great goaltenders all year and were able to score. We’re just not finding the net. We’re likely not putting enough there and likely not simplifying, but you say that and you look at the shots and our quality of chances, we should be able to score a few more goals.”

The Wild know they are running out of time to change that.

They will head to T-Mobile Arena for Game 5 on Monday facing elimination, an outcome that is certain if Minnesota is unable to score goals.

Fiala, who had six shots Saturday and 18 in the series without recording a point, still believes in his team’s ability to create offense, but he knows they can’t obsess over the first four games.

“It’s frustrating, but it’s Game 5 now,” he said. “We have to let this go. I’m confident we are going to score, including myself. I still feel like I’m going to get it done. I had a great chance today again. Fleury won it for them today again. We take it game by game and shift by shift, and we won’t give up.”

Minnesota also must get more out of a power play that is 0-for-8 in the series against the NHL’s top-rated unit. The Wild had a prime chance in the second period Saturday with a four-minute power play because of a double-minor penalty, but allowed a short-handed goal to Mark Stone that put the Knights in control.

Several Wild players credited the Knights’ efforts in front of Fleury to block shots and disrupt lanes to the net. They promise a commitment to get more pucks to the crease and bodies in front to pounce on rebounds, but they have had more than 240 minutes on the ice and yet to consistently execute such a strategy.

“You’re always frustrated when a goalie is playing like that, playing on his head,” forward Marcus Foligno said. “You really can’t do much but keep shooting. We’ve been a resilient group all year, and that’s got to be the mindset for next game. Maybe having that desperation in our game going into Vegas is what we need. It’s tough to drop two, especially when we’ve been so good at home. But playoffs is playoffs, and we’ve just got to win one game.”