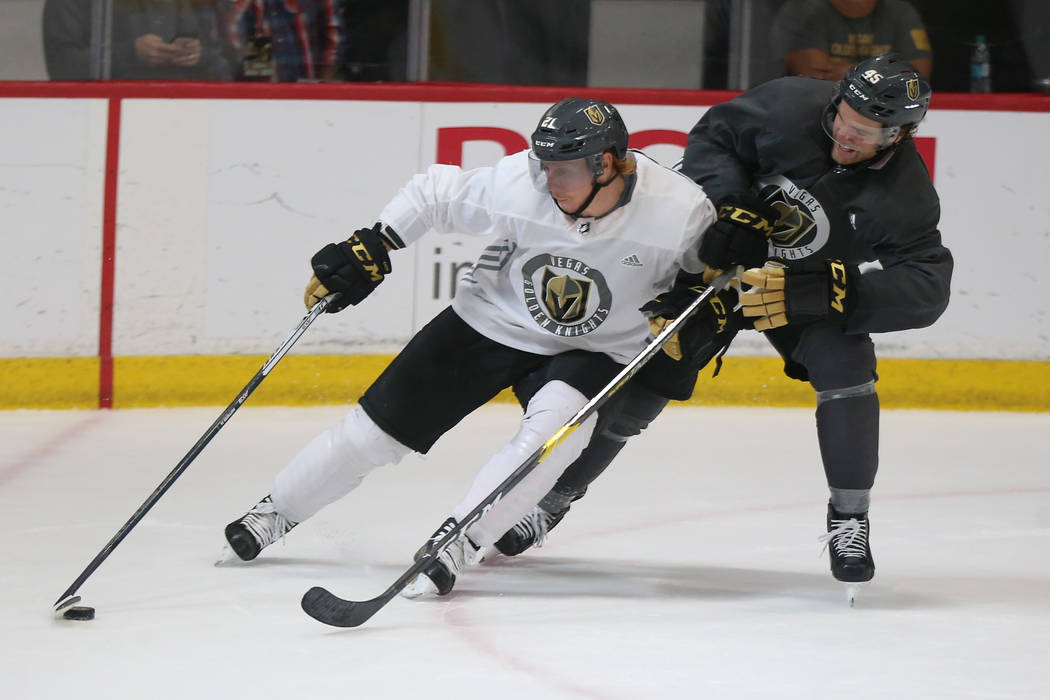 Opening faceoff is 7 p.m., and the game will be broadcast on AT&T SportsNet Rocky Mountain.

Eakin has been day to day since he suffered a lower-body injury in the Knights’ 3-2 loss to Los Angeles on Sept. 27. He is expected to center a line with right wing Cody Glass and left wing Valentin Zykov.

Center Paul Statsny is projected to move back to his regular spot on the second line.

“I think it’s going to help (Stastny), and I think Cody (Glass) going to the wing with Cody Eakin, there’s no issue there,” coach Gerard Gallant said.

The Knights (2-2) have lost two straight games following a 4-1 setback to Arizona on Thursday. Goaltender Marc-Andre Fleury came on in relief of the injured Malcolm Subban and will start against Calgary.

Oscar Dansk was recalled from the American Hockey League on Saturday to serve as the backup.

This is the first game of a back-to-back that concludes Sunday at Los Angeles.

“We can’t let them dictate the way the game is being played,” Knights leading scorer Mark Stone said. “We have to be the ones to dictate the way it’s played, especially in our rink. We really have to have a strong first 10 (minutes). When we do that at home, we get our crowd into it and get momentum, which leads to success.”

The Flames (2-1-1) are expected to use the same lineup from Thursday’s 3-2 shootout victory over Dallas.

Johnny Gaudreau leads the Flames with six points. Matthew Tkachuk has seven goals and 11 points in six career games against the Knights.

“I think we’re starting to play quicker and that’s what we have to do here tonight is make sure we play with tempo and all four lines,” Flames coach Bill Peters said. “They’re going to be coming off a loss, so they’re going to be hungry. They’re always good at home. They come out flying at home. It’s an unbelievable atmosphere, but we’ve got to use that and take that energy in our favor.”