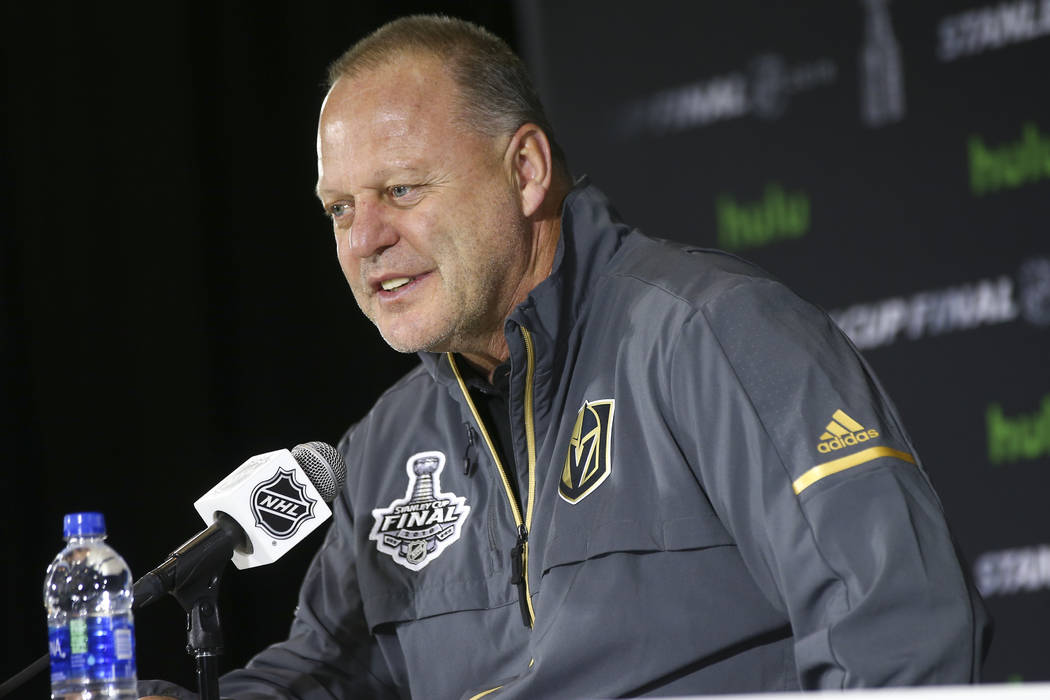 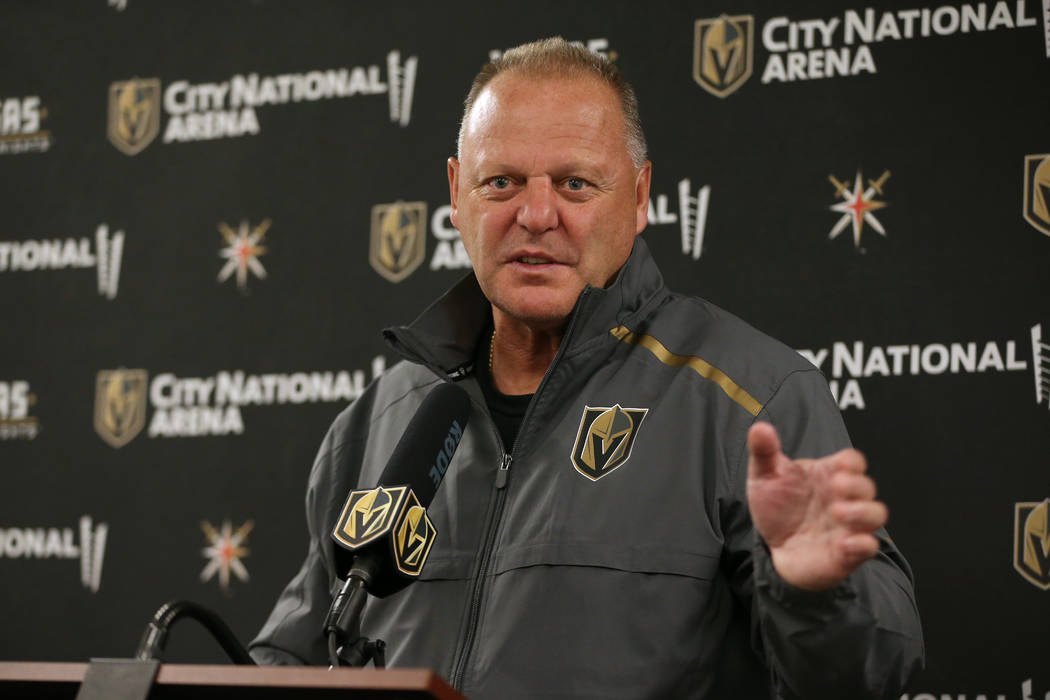 Gerard Gallant wanted to make it clear he did not have philosophical differences with the Golden Knights front office.

Gallant spoke to the Review-Journal on Friday morning and said no rift existed between himself, general manager Kelly McCrimmon and president of hockey operations George McPhee, which made his Jan. 15 dismissal so surprising.

“We got along good. We called up players. There was no issues,” Gallant said in a phone interview. “I was stubborn a little bit at times and stuff like that, but there’s nothing toward me or Kelly or George. It was come to work. Work with your GM. That’s why I was surprised.

That morning in Ottawa

Gallant went 118-75-20 with the Knights and won the Jack Adams Award for coach of the year in 2018 after leading the expansion club to the Stanley Cup Final.

The Knights lost in the Western Conference quarterfinal last season, but expectations were high for this season after spending big on right wing Mark Stone and restricted free agent center William Karlsson, among others.

But the Knights never found their footing and were out of a playoff position at 24-19-6 after a 4-2 loss to Buffalo on Jan. 14 that was their fourth in a row.

Gallant received a phone call at 8:45 the next morning in his hotel room in Ottawa, Ontario, and was told McCrimmon and McPhee wanted to speak with him.

“I went to their room. I was told they’re going to go in a different direction. What do you say when that happens?” Gallant said. “I thought maybe we were going to have a conversation of, ‘Let’s get ’er going here. Let’s get the team going. Who are we going to call up?’ That’s what I thought it was going to be.

“Usually you have an idea. You can feel something. But I didn’t have that. Maybe that was my own stupidity, I don’t know. I never felt like anything like that was going to happen.”

No meddling from above

The Knights underwent a major defensive change starting with the game at Nashville on Nov. 27, switching from a man-to-man system to a zone coverage scheme. A 13-4-2 run ensued, culminating Jan. 4 with the largest comeback in franchise history in a 5-4 overtime victory over St. Louis.

Defenseman Shea Theodore indicated the decision to change came from the coaching staff and management, but Gallant said the coaches made the tactical adjustment and were not being undercut by the front office.

“Every summer as a coaching staff, we have our meetings,” Gallant said. “We talk about should we change anything? Should we do something to our systems? For two years I thought it went real well. Coming into year three, we had some issues and we had our own complaints about it.

“Some of that man-to-man wasn’t working for us, so as a coaching staff, we talked about, ‘Let’s change this. Can we do this now or should we do it at the end of the year?’ There was all kinds of that back and forth. But management never came down and said, ‘Change this.’ No, that never happened.”

Gallant also touched on a few other topics during the 10-minute interview Friday.

— On whether he’s over the initial shock: “I feel a lot better right now. I came back to Vegas a couple of days ago just to sort of clean things up and get things taken care of. I don’t know where I’m going to go after that, whether I’ll go back to Canada. I’m not sure.”

— On what he did after being notified by McCrimmon and McPhee: “I got on a flight later that afternoon and went back to Moncton (New Brunswick) actually. My wife was there already with the grandkids. She was there for three or four days. We were planning on going to the All-Star Game after the break. I was in Boston. I was going to go to (Prince Edward Island) and then the All-Star Game from there, so we were all going to go together.”

— On whether he’s watched any NHL games: “I started watching a few games the last three or four days, but not a whole lot. I think I might have watched a period or two in the Vegas-Boston game. It wasn’t because I wasn’t trying to watch. It was just that I was doing other things. I wasn’t really into watching anybody at that time. I was spending time with the grandkids. I was just getting away from it for a while.

“It was a shock. I was really disappointed. I was really frustrated. I went back home and reset a little bit. It probably took a week or so before I really said, ‘You know what? There’s no sense complaining and whining. Let’s move forward and see what’s going to happen in the future.’ It was good. I did the right thing going home and seeing the grandkids. I had a lot of fun with them, and they’re the perfect age. It was good healing.”

— On being fired by the Florida Panthers compared to the Golden Knights: “This is completely different. The Florida one I knew was coming, it was just a matter of when. I knew that from a meeting in the summertime. I had the feeling.

“This one I had no idea it was coming. I didn’t feel it coming at all. That was the toughest part. I understand you lose four games in a row, we didn’t play well the last three home games. We won the first four and then the Buffalo game I thought we should have won. We missed a couple open nets, just things didn’t go our way.”

— On his next coaching stop: “When you’re a coach and you’re no longer coaching, you’re going to look at anything. If something comes up and somebody calls me, I’ll listen to anybody and everybody. It doesn’t matter where the team’s at (in the standings). You look at the NHL today, the top team and the bottom team, seriously, there’s not a huge difference. And it can change from year to year. It really does. There’s so many teams that are close. I’m going to listen to anybody that wants to talk.”

— On what he’ll miss about Las Vegas: “It was pretty close to perfect. I had a nice home here. We were six minutes from the practice rink, 20 minutes to downtown. For 2½ years, it was great. I had no issues. Everything was good. I enjoyed everything. We had a good staff. I really liked it. The fans were unbelievable. The city was unbelievable. I’m disappointed obviously, and you kind of get over it and move on, but it was a perfect place for me. I really enjoyed it.”

— On his fondest memories from coaching the Knights: “The first year was incredible. The closest thing to a miracle on ice I’ve ever seen. It was fun, and it will never be forgotten. Great memories from that, for sure. And the players were awesome. I loved it here. I had a great time. For 2½ years, it was exceptional. I couldn’t ask for anything more. We loved it. The fans were tremendous. They showed a lot of respect to our team and to me. It was a great place to work for 2½ years, there’s no doubt.”

— On whether he’ll get a tribute video when he returns to T-Mobile Arena: “I sure doubt it. It was only 2½ years. It’s not like I was there five or six.”