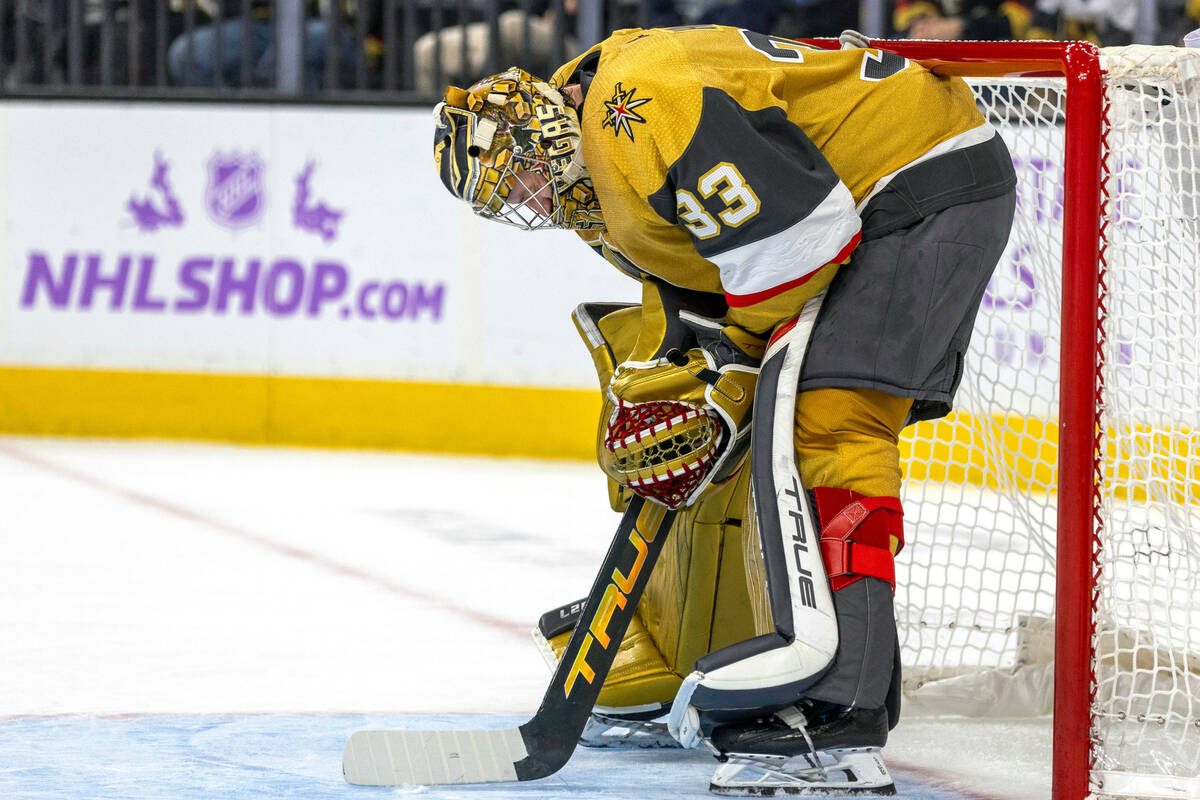 Golden Knights goaltender Adin Hill (33) is dejected after missing another goal score by the Seattle Kraken during the second period of their NHL game at T-Mobile Arena on Friday, Nov. 25, 2022, in Las Vegas. (L.E. Baskow/Las Vegas Review-Journal) @Left_Eye_Images 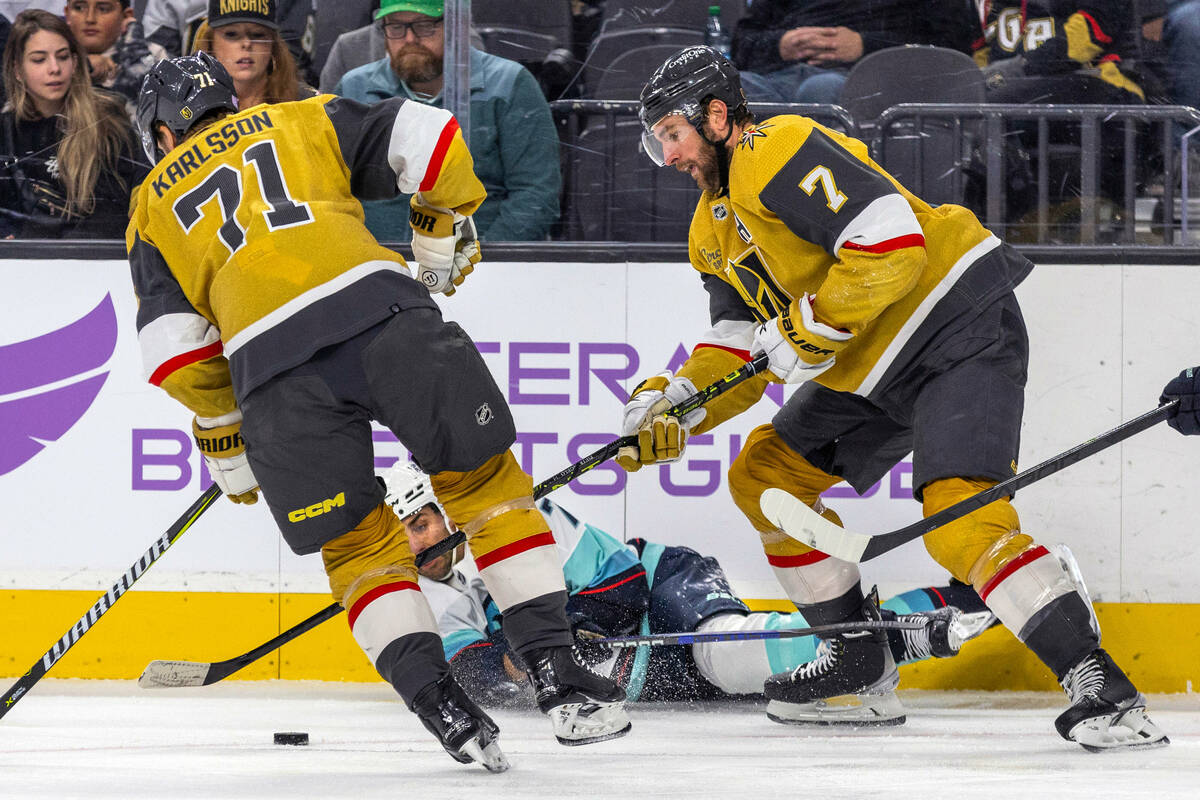 Shea Theodore tilted his head back and stared at the T-Mobile Arena ceiling.

The Golden Knights defenseman had just watched Vancouver Canucks right wing Andrei Kuzmenko skate right down the slot with no one defending him and bury a feed from center Nils Aman for a 4-0 lead Saturday.

Those kind of defensive breakdowns hardly ever seemed to happen when the Knights got off to one of the best starts in the NHL. Now they’ve become all too common.

The Knights, since a nine-game winning streak gave them the most points in the league, are 3-4-1. The common thread in those losses is defense. The Knights have been leaking too much, and they need to plug the gaps before starting a four-game road trip in Columbus on Monday.

“We have to do a better job trying to win games 1-0 rather than going back and forth with teams,” left wing Reilly Smith said.

The Knights’ defensive start was sensational.

They led the NHL in goals allowed (17), goals allowed per game (1.70) and save percentage (.941) in October. Those numbers were always going to come down — Carolina led the league in goals against per game last season at 2.44, for example — but the fall has been dramatic.

The Knights allowed two goals or fewer in seven of their 10 games in October. The most they gave up was three. They’ve allowed two or fewer only three times in 13 November games.

The reason the Knights’ 8-4-1 record this month is still solid is they’ve scored 48 goals, the third most in the NHL.

“We have to find a way to piece everything together,” defenseman Alex Pietrangelo said.

Reasons for the dropoff include goaltending, special teams and fatigue.

The Knights started the month with 13 games in 26 days, including five games in the past eight days and three in the last four. Maintaining intensity was always going to be a challenge.

The Knights also haven’t gotten as many saves. Their .891 save percentage in November ranks 24th in the NHL. Rookie goaltender Logan Thompson is 7-2 this month with a .907 save percentage. His partner Adin Hill — 1-2-1 record, .864 save percentage — has struggled.

Coach Bruce Cassidy puts some of the blame on the Knights’ defensive structure. He knew it would be a difficult task asking two young, relatively unproven goaltenders to be stout throughout an entire season. His system is designed to make their lives easier.

Lately, things have gotten more difficult. The Knights have allowed the 14th-fewest high-danger scoring chances per 60 minutes at five-on-five in November, according to the website Natural Stat Trick. They gave up the fourth fewest in October.

“They got to do their part and make their saves, but we have to be better in front of them,” Cassidy said. “We’ve asked them to make too many high-end saves.”

The Knights’ strife at five-on-five has carried over to the penalty kill. They’ve allowed 10 power-play goals on 34 opportunities this month. Their 70.6 percent success rate ranks 26th in the NHL. Smith said he feels the Knights are “a little bit too passive” after they allowed a season-high three power-play goals Saturday.

Cassidy said the team can look to make tweaks, but he also pointed back to execution. He said the Knights can be better at faceoffs, clearances and defending their blue line to spend less time in their own zone on the kill.

They need to find a way to improve somehow. The Knights still have the third-best record in the NHL, but their defensive issues have made their leads in the Pacific Division and Western Conference more precarious.

They need solutions before a trip that includes two matchups against top-10 offenses in Boston and Pittsburgh. “We’ve got to use these next four games to really grab this thing together as a group and move forward,” Pietrangelo said.