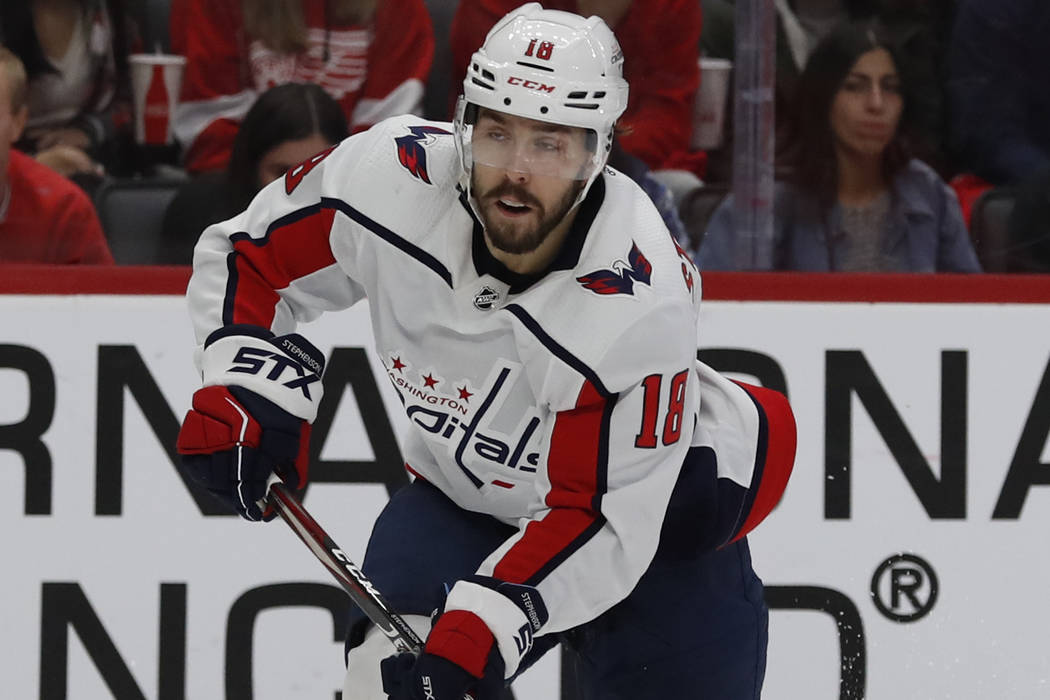 NEW YORK — Short on depth at forward, the Golden Knights added Washington’s Chandler Stephenson via trade following their 4-1 victory over the New York Rangers on Monday.

In exchange for the 25-year-old bottom-six grinder, the Knights sent a 2021 fifth-round pick to the Capitals. Stephenson is expected to join the Knights prior to their game against New Jersey on Tuesday.

In a corresponding move, the Knights reassigned center Nicolas Roy to the American Hockey League.

Stephenson was drafted by Washington in the third round in 2012 while Knights president of hockey operations George McPhee was the general manager in Washington. Knights GM Kelly McCrimmon also is familiar with Stephenson from his time in the Western Hockey League.

In 24 games with the Capitals, the 6-foot, 208-pound Stephenson had three goals and four points. He’s produced 14 goals and 19 assists in 168 career NHL appearances and helped Washington defeat the Knights in the 2018 Stanley Cup Final.

Stephenson was held out of Washington’s practice on Monday in San Jose, and coach Todd Rierden told reporters it was due to an impending transaction.

The Capitals are pushed against the salary cap, and moving Stephenson’s $1.05 million salary would allow them to recall a seventh defenseman. He will be a restricted free agent with arbitration rights in the summer.

Stephenson will wear No. 17 for the Knights, who are down to 12 healthy forwards with center Cody Eakin listed as week to week with an upper-body injury.

The Knights complete their back-to-back on Tuesday against a struggling New Jersey Devils team that allowed five first-period goals in a 7-1 loss to Buffalo on Monday and is filled with turmoil.

Trade rumors continue to swirl around left wing Taylor Hall, who will be an unrestricted free agent in the summer. The league MVP two seasons ago was pushed down to the third line for Monday’s game at Buffalo.

Meanwhile, center Jack Hughes, the No. 1 overall pick in June, missed his second straight game and is day to day. He was injured after blocking a shot in Thursday’s win at Montreal.

Knights prospects Peyton Krebs and Peter DiLiberatore were among the 31 players named to Canada’s National Junior Team Selection Camp from Dec. 9 to 12 in Oakville, Ontario.

The camp will be used to determine Canada’s roster for the 2020 IIHF World Junior Championship, which runs Dec. 26 to Jan. 5 in Ostrava and Trinec, Czech Republic.

Krebs, the Knights’ first-round pick in June, recently returned to his major-junior team after the center underwent offseason surgery to repair a partially torn Achilles. DiLiberatore, a sophomore defenseman at Quinnipiac, was taken in the sixth round in 2018.