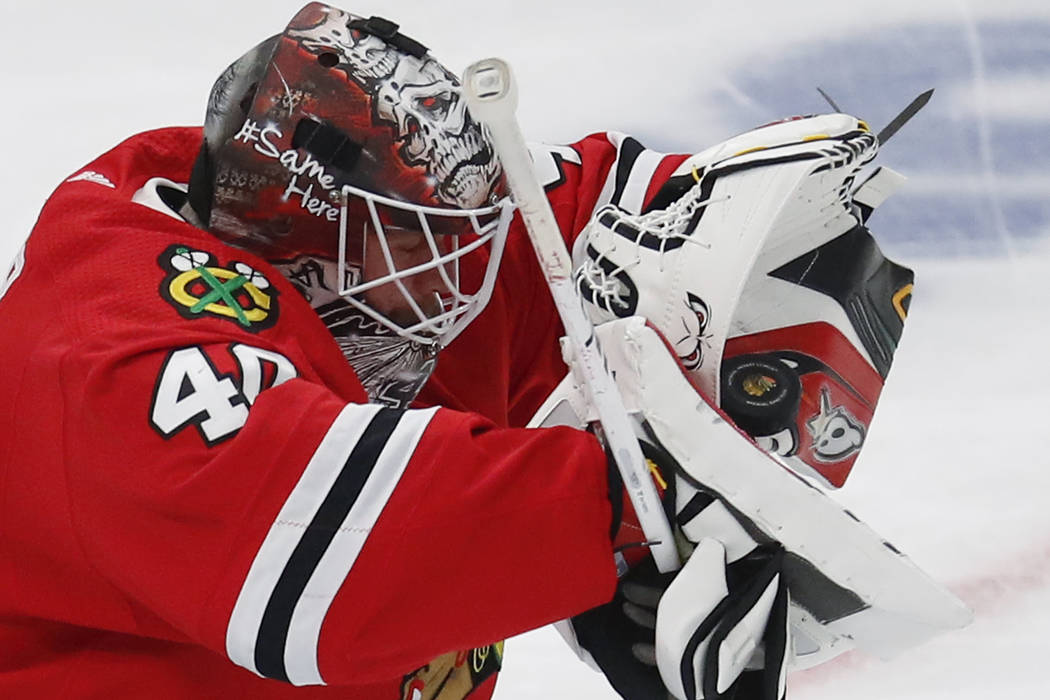 Chicago Blackhawks' Robin Lehner makes a save against the Toronto Maple Leafs during the second period of an NHL hockey game Sunday, Nov. 10, 2019, in Chicago. (AP Photo/Jim Young) 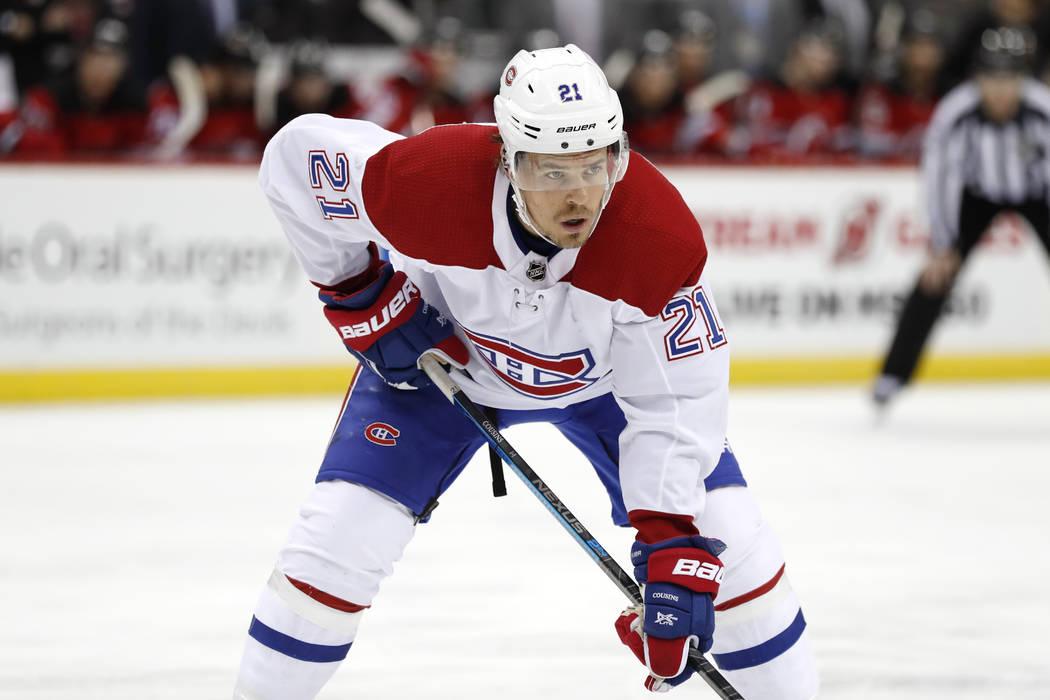 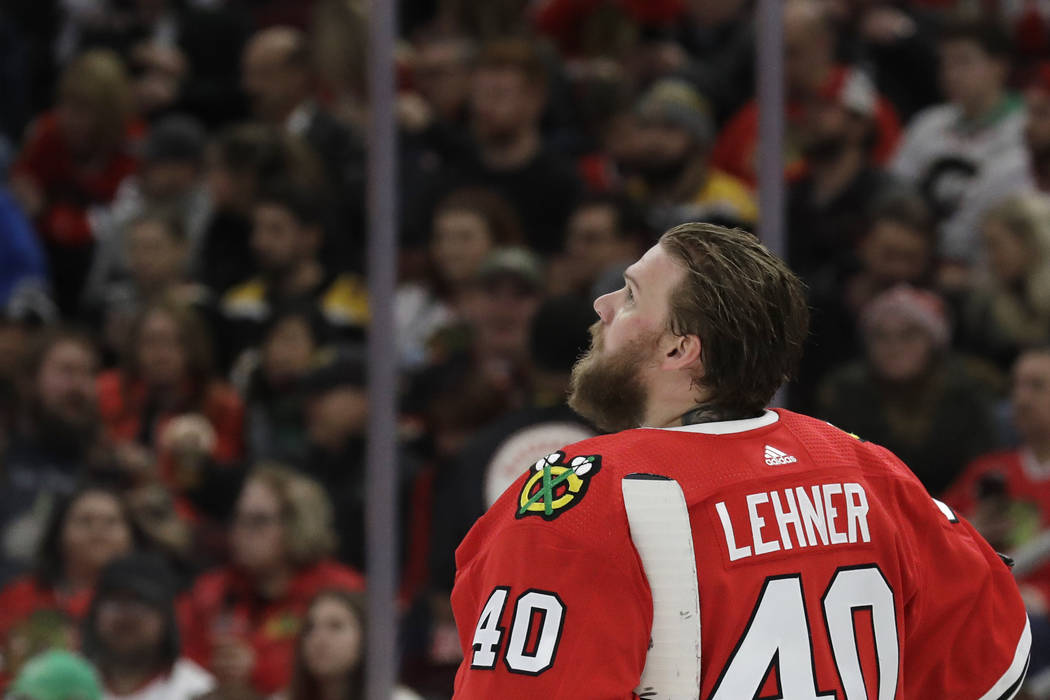 Chicago Blackhawks goalie Robin Lehner looks up the score board during the first period of an NHL hockey game against the Boston Bruins in Chicago, Wednesday, Feb. 5, 2020. (AP Photo/Nam Y. Huh)

For all of their aggressiveness at the past two trade deadlines, the Golden Knights’ front office is on record as being averse to paying high prices for a rental player.

They made an exception on Monday.

The Knights bolstered their goaltending for the postseason, landing Chicago’s Robin Lehner ahead of the NHL trade deadline.

Backup goalie Malcolm Subban went to the Blackhawks along with 19-year-old prospect Slava Demin and a 2020 second-round pick that originally belonged to Pittsburgh.

Really exited to join Vegas. Going to be a ride. Can’t wait to get there but please no drums at the airport I’m shy…

The Knights also received prospect Martins Dzierkals and sent a 2020 fifth-round pick to Toronto, which is retaining a portion of Lehner’s $5 million salary. Chicago also is retaining 50 percent of his contract.

In a separate deal, the Knights added depth forward Nick Cousins from Montreal for a 2021 fourth-round pick.

”(I)f anything happened to Marc-Andre Fleury, we (felt we) weren’t strong enough to win playoff games if we get to that point. Those are hard decisions, but we felt that way. It’s uncommon that there’s a goaltender available of Robin Lehner’s ability. … Those things all lined up to make this happen.”

Lehner is set to become an unrestricted free agent July 1 and should command a hefty salary after two consecutive seasons among the league’s top goalies.

The 28-year-old native of Sweden was a finalist for the Vezina Trophy last season after he posted a 2.13 goals-against average and .930 save percentage for the New York Islanders.

He is 16-10-5 with a 3.01 goals-against average and a .918 save percentage in 33 appearances this season and gives the Knights a reliable tandem with the 35-year-old Fleury.

But unlike when the Knights traded for Max Pacioretty and Mark Stone, McCrimmon said there were no talks with Lehner’s agent on a contract extension, making him a rental for the final 18 regular-season games and playoffs.

Lehner won the 2019 Bill Masterton Memorial Trophy, given annually to the player who best exemplifies the qualities of perseverance, sportsmanship and dedication to ice hockey.

He detailed his addiction and mental health issues in a September 2018 story for The Athletic and forged a close relationship with the Islanders’ fan base.

“Thank you Chicago. What a great city. Fans were unbelievable and I’m not going to forget the short time there. I believe in this team and still do,” Lehner wrote on his Twitter account. “Great teammates! gonna miss all of you. The city and guys deserve the best,. Really exited to join Vegas. Going to be a ride. Can’t wait to get there but please no drums at the airport I’m shy…”

Taking of to Vegas. @MapleLeafs we were so close…😂 see you tomorrow Vegas. Can’t wait to join the @GoldenKnights pic.twitter.com/TNnzU8AcSS

Subban made 25 saves in the Knights 6-5 overtime victory Sunday at Anaheim, but he gave up two goals in the final 2:56 of regulation, which was the final strike against him.

It was the fourth time in his past five starts that Subban allowed four or more goals, and McCrimmon couldn’t wait for the results to improve.

“We spoke with (coach) Peter (DeBoer). He’s on the same page as us with respect to the motivation behind the deal,” McCrimmon said.

Cousins has nine goals and 22 points along with 33 penalty minutes in 58 games with Montreal. He is expected to slot on the third or fourth line and was described by teammate Alec Martinez as a “(expletive) disturber.”

The 26-year-old Cousins had a career-high 27 points last season with Arizona and will be a restricted free agent after the season.

“It adds another NHL player to our group,” McCrimmon said. “We’re preparing to hopefully play a lot of hockey and we need NHL players to do that.”

Demin was selected in the fourth round in 2018 and is a sophomore at the University of Denver.

By dealing the pick they received from Pittsburgh for selecting Fleury in the expansion draft, the Knights do not have a second-round pick in 2020.

“A lot of these things that go on, we all want to win,” McCrimmon said. “I think that when you have a chance to add really good players to your team, that’s what we want to do. We want to win.”