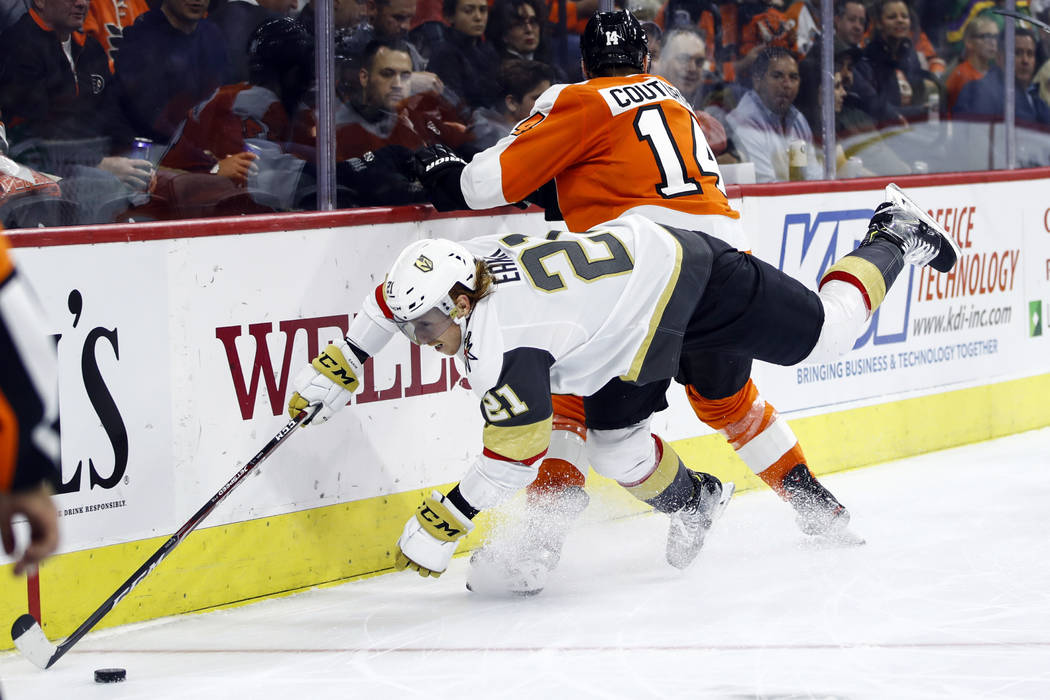 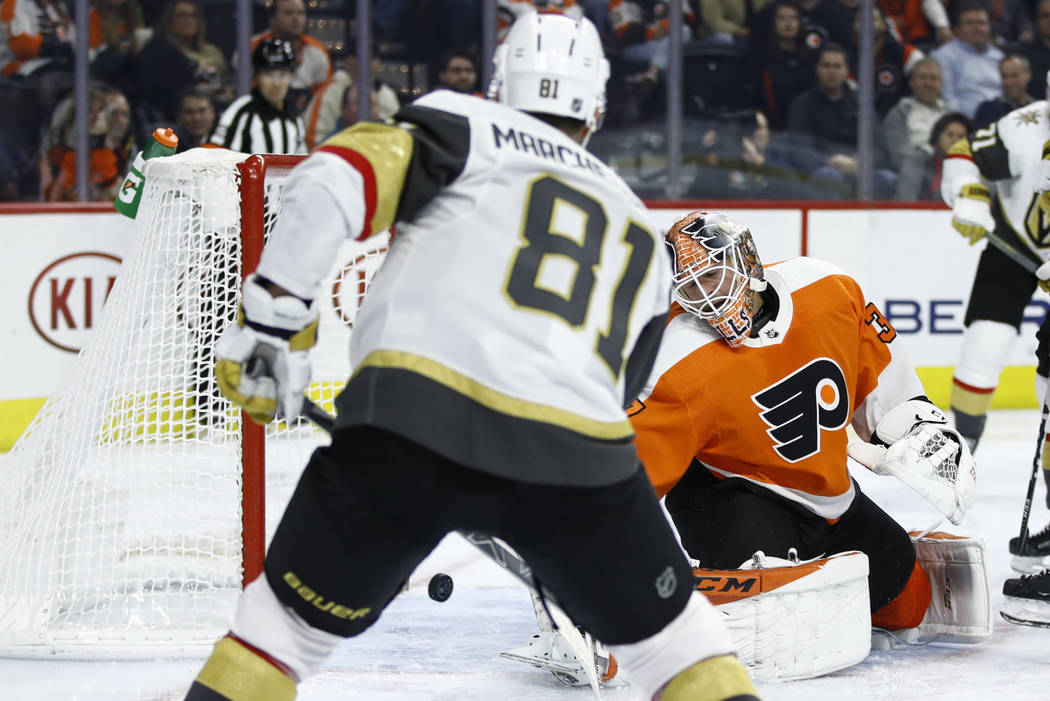 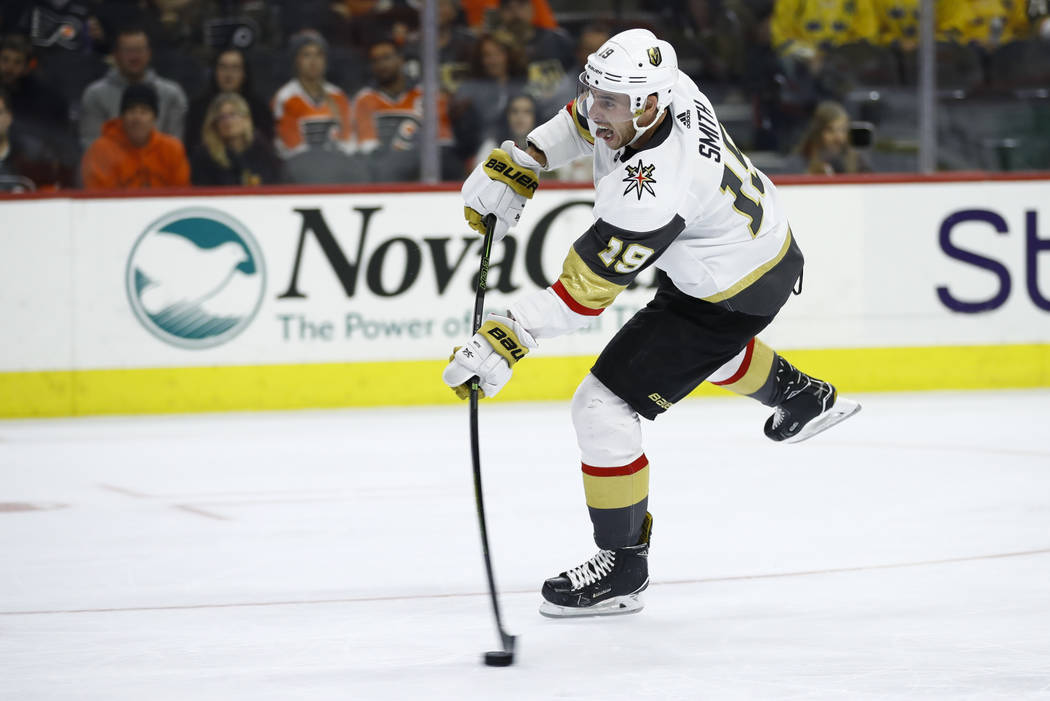 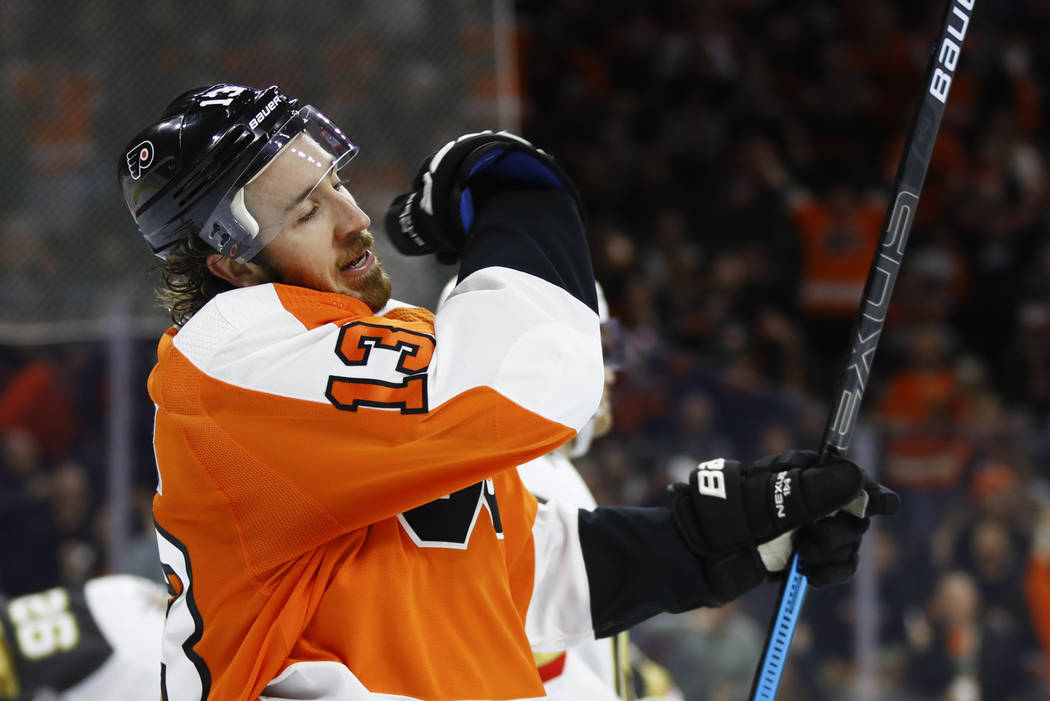 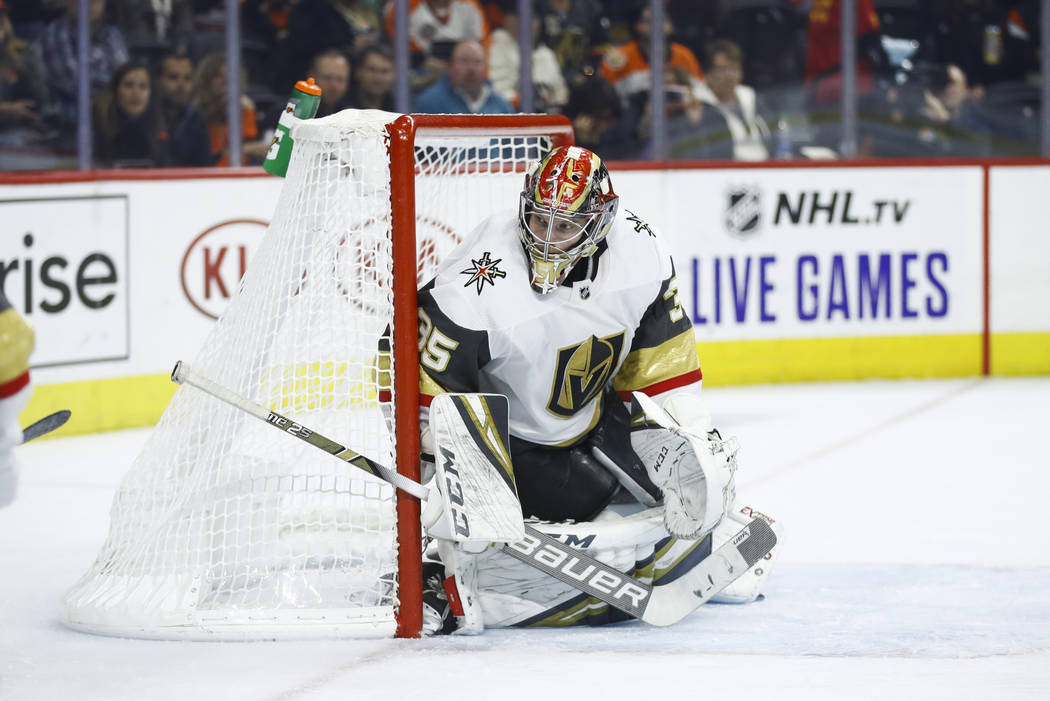 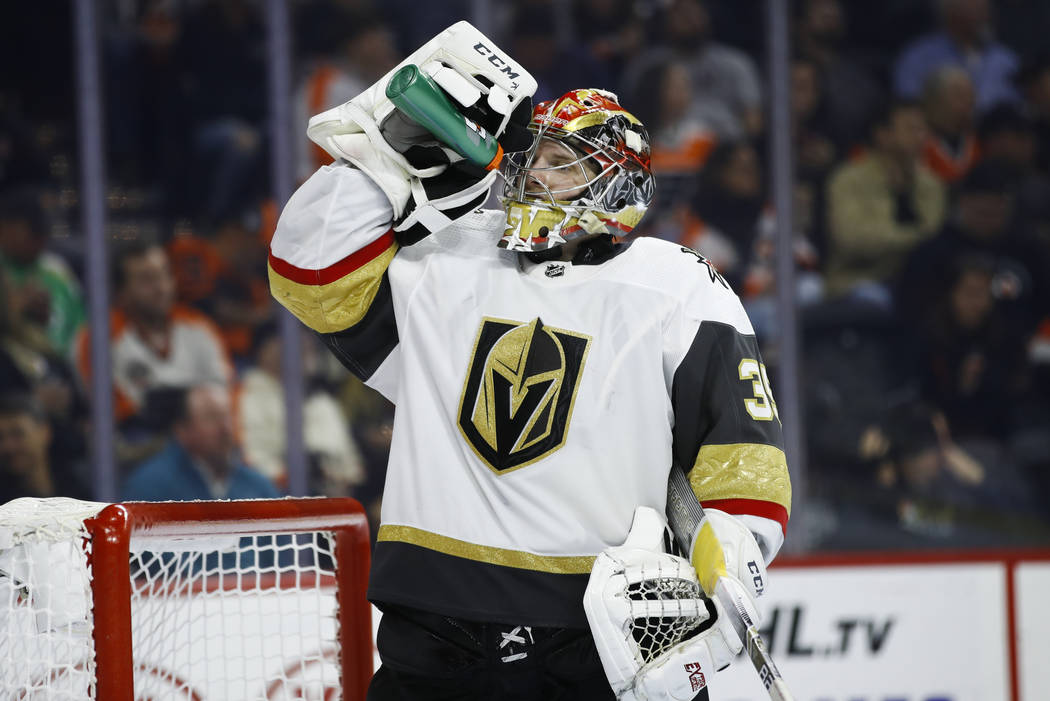 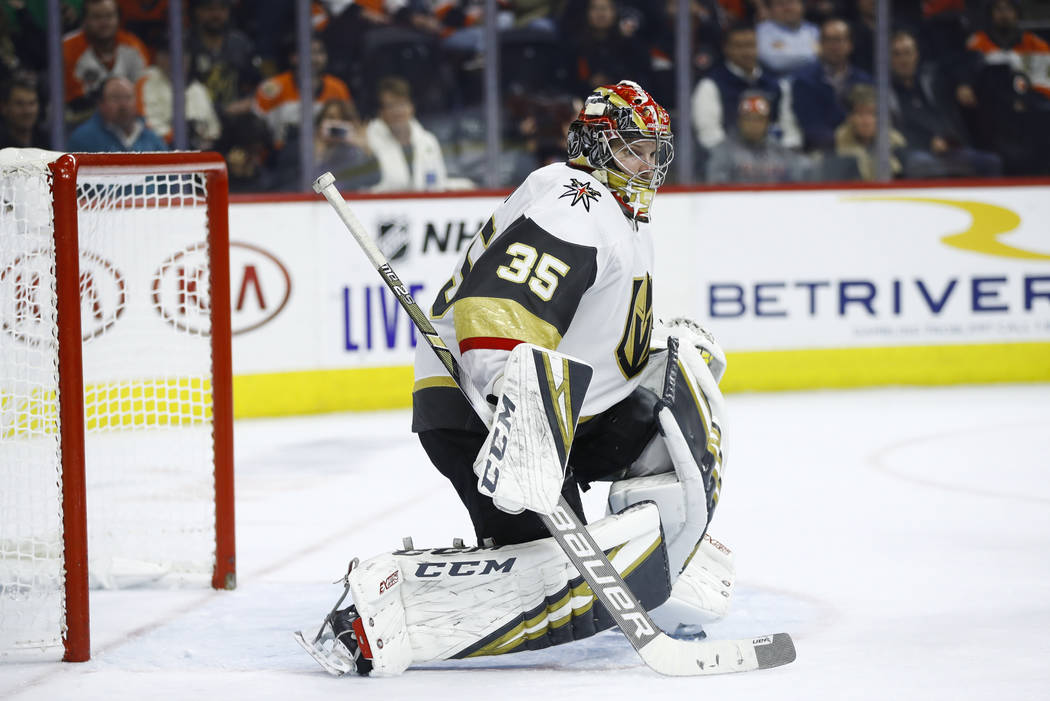 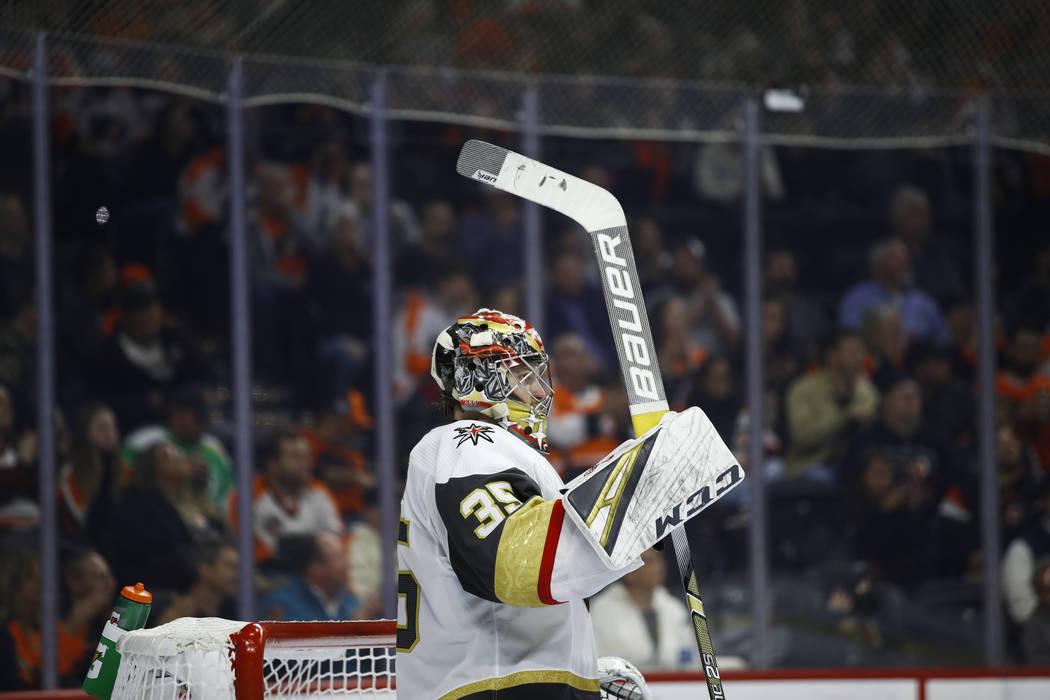 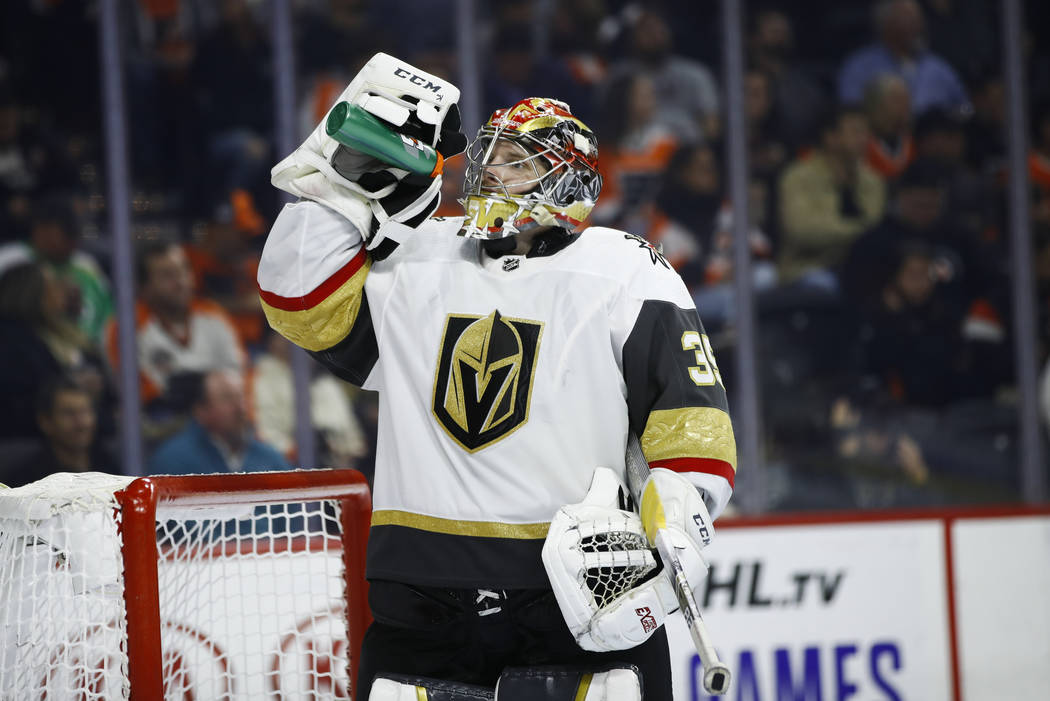 PHILADELPHIA — Two years to the day after his NHL debut, goaltender Oscar Dansk was back in net for the Golden Knights on Monday.

This appearance wasn’t as memorable.

Dansk allowed four goals on nine shots in the second period and couldn’t overcome a sloppy defensive performance in a 6-2 loss to the Philadelphia Flyers at Wells Fargo Center.

“Three or four or five guys didn’t play real well tonight, and I thought most of our guys played OK,” coach Gerard Gallant said. “We made some bad decisions in our (defensive) zone. That was the worst D zone we had this year. And last year.”

Dansk was handed the start on the first game of a back-to-back and struggled in his first NHL appearance since Oct. 30, 2017. He finished with 31 saves and suffered his first career loss in five games.

Dansk was beaten on a Kevin Hayes wraparound in the second period to put the Flyers up 2-0, and Michael Raffl scored the first of his two goals 44 seconds later. Matt Niskanen and Oskar Lindblom had goals 55 seconds apart later in the period.

“Personally it’s not the night that I want to happen when you come in and it’s the first game of the season,” Dansk said. “A couple of those I can play differently and give myself a better chance to make the save.”

Jonathan Marchessault converted on a 5-on-3 power play and Reilly Smith added his team-high seventh goal in the third period for the Knights, who face Chicago on Tuesday to finish their three-game road trip.

Here’s what stood out in the Knights’ loss:

Gallant didn’t like the way the Knights played in the first period when they were outshot 15-7 and put his top three forward lines in the garbage disposal.

The resulting line combinations had the desired offensive effect, as the Knights generated several good scoring chances in the final two periods.

“I really liked our second and we gave up four goals,” Gallant said. “That’s the funny part about it.”

Dansk admitted he didn’t pick up Hayes behind the net and took responsibility for the second Flyers goal. And Raffl’s first goal came on a deflection, though it appeared Dansk was beaten cleanly by Ivan Provorov’s shot when he was unable to fight around a screen.

After tightening up defensively against Pittsburgh on Saturday, the Knights struggled in their own zone and allowed more than 35 shots for the seventh time in 10 games.

“We were slow mentally, and that led to us being second on pucks and a lot of mental errors that caused the puck to go in the back of our net,” Smith said. “It’s too bad because Oscar made a lot of saves tonight, but we didn’t play hard enough in front of him.”

The Knights entered with the league’s top penalty-killing unit at 94.3 percent and had not allowed a power-play goal on the road in 14 chances.

But the Flyers burned the Knights twice with the man advantage. Travis Konecny opened the scoring on a broken play off the rush, and Niskanen one-timed a cross-ice feed from Sean Couturier to put the Flyers up 4-0.

The Knights had allowed two power-play goals in their first nine games combined.

“I don’t think we had a lot of awareness,” Smith said. “We can’t be giving up back-door goals like they were scoring and giving them looks like they had.”

3. Two steps forward, one back.

Three times this season the Knights have had a two-game win streak, and they’ve failed to extend it each time.

That lack of consistency is the Knights’ biggest struggle so far. The frustration was evident in several players after the game.

“It seems like we get two (straight wins) and then maybe turn the brains off a little bit,” defenseman Deryk Engelland said. “It’s as much the work ethic as it is playing smart.”