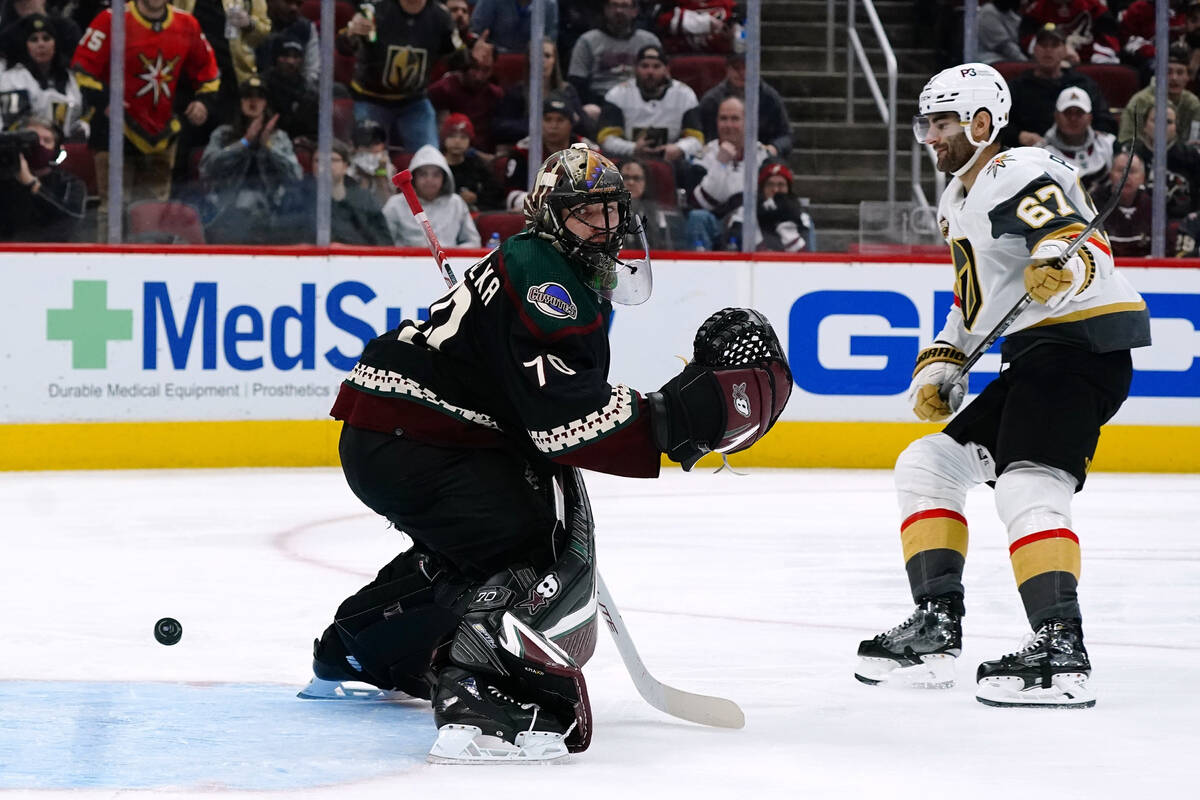 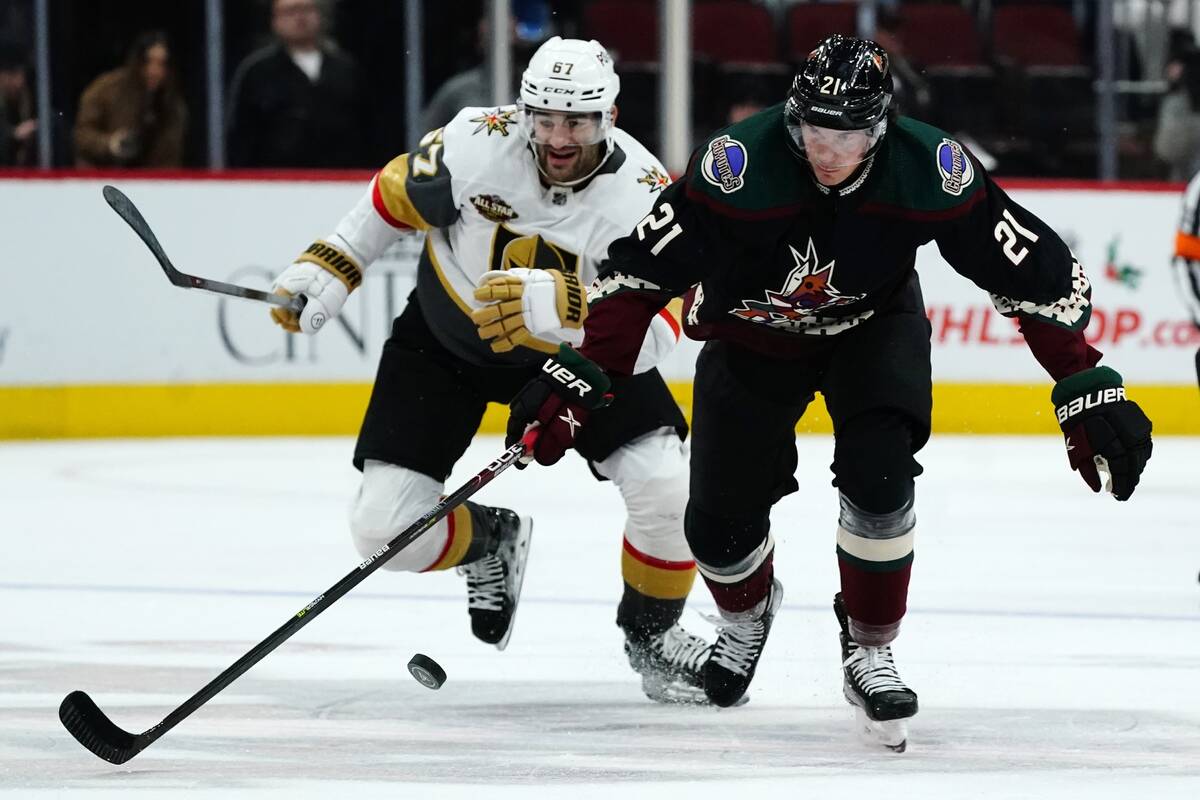 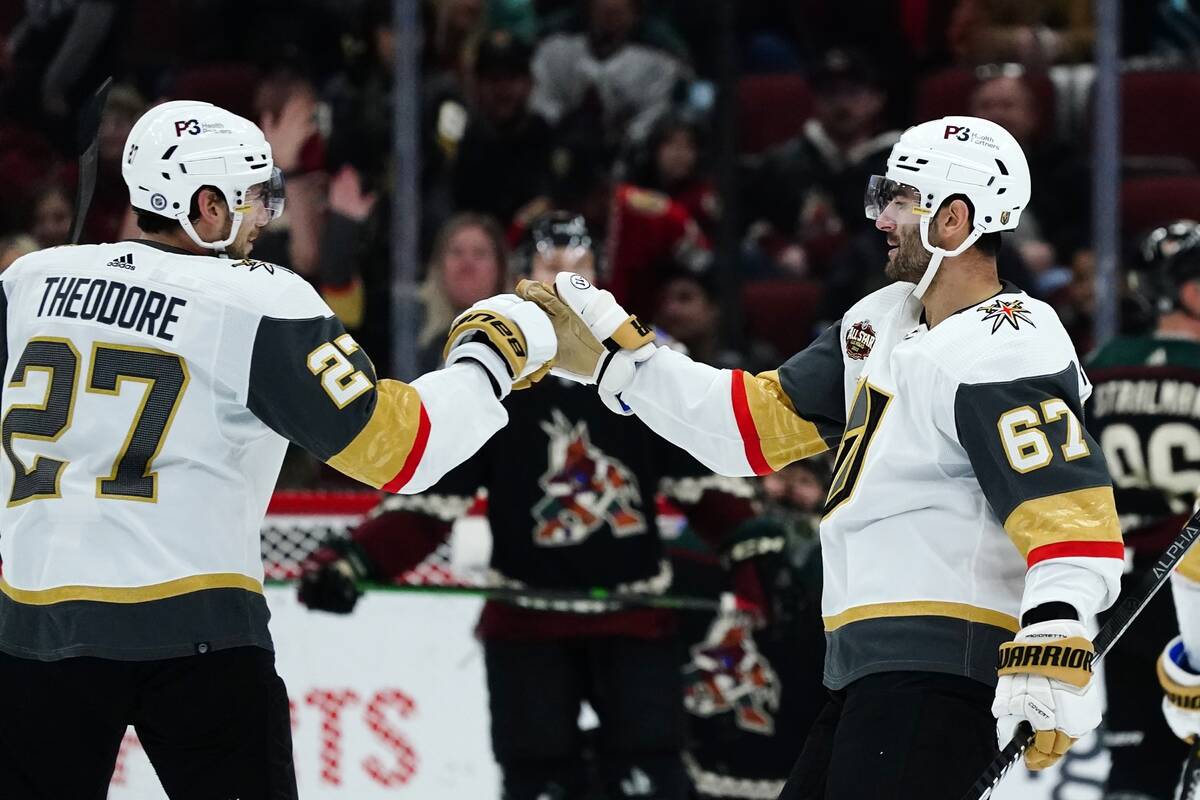 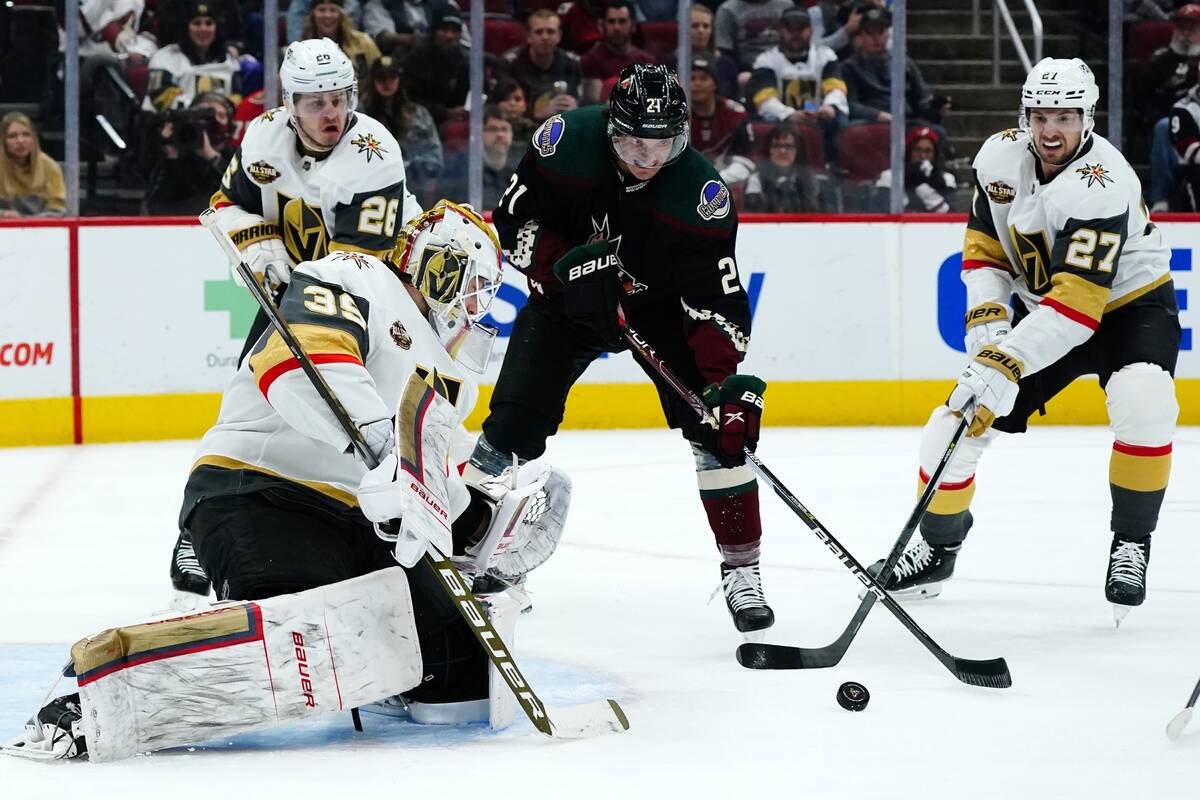 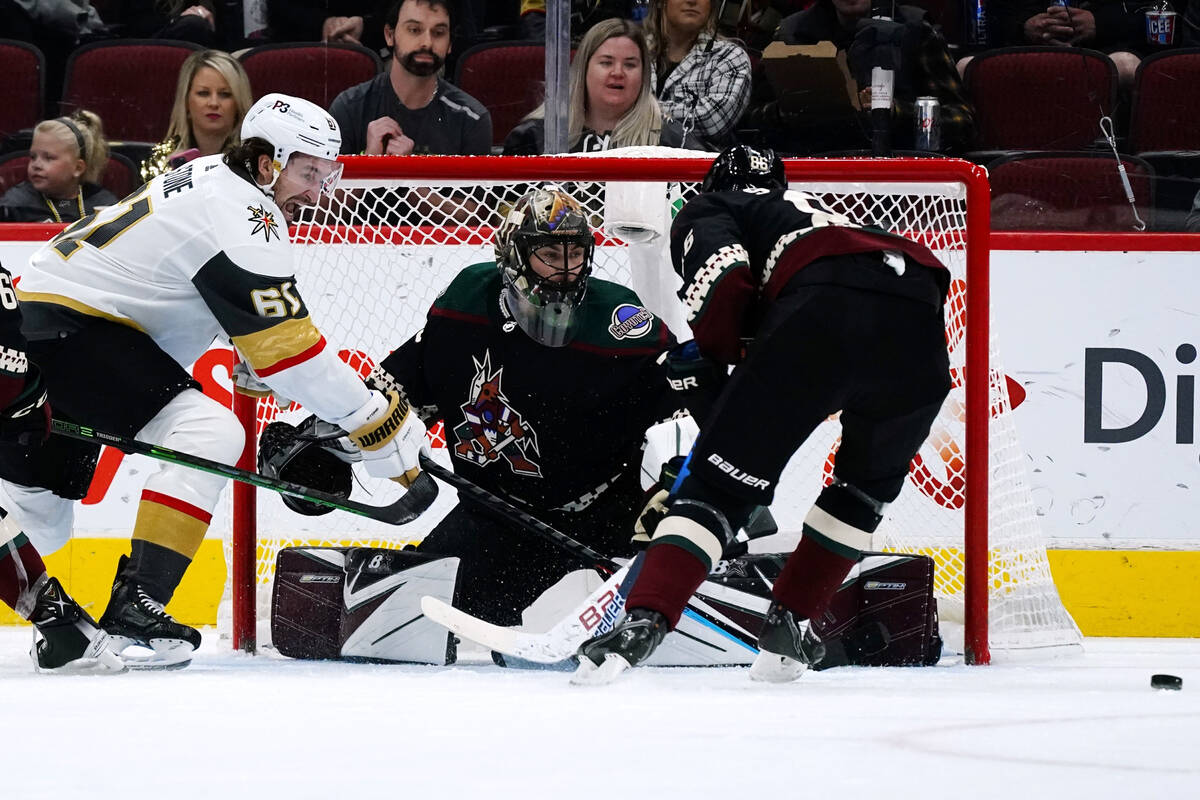 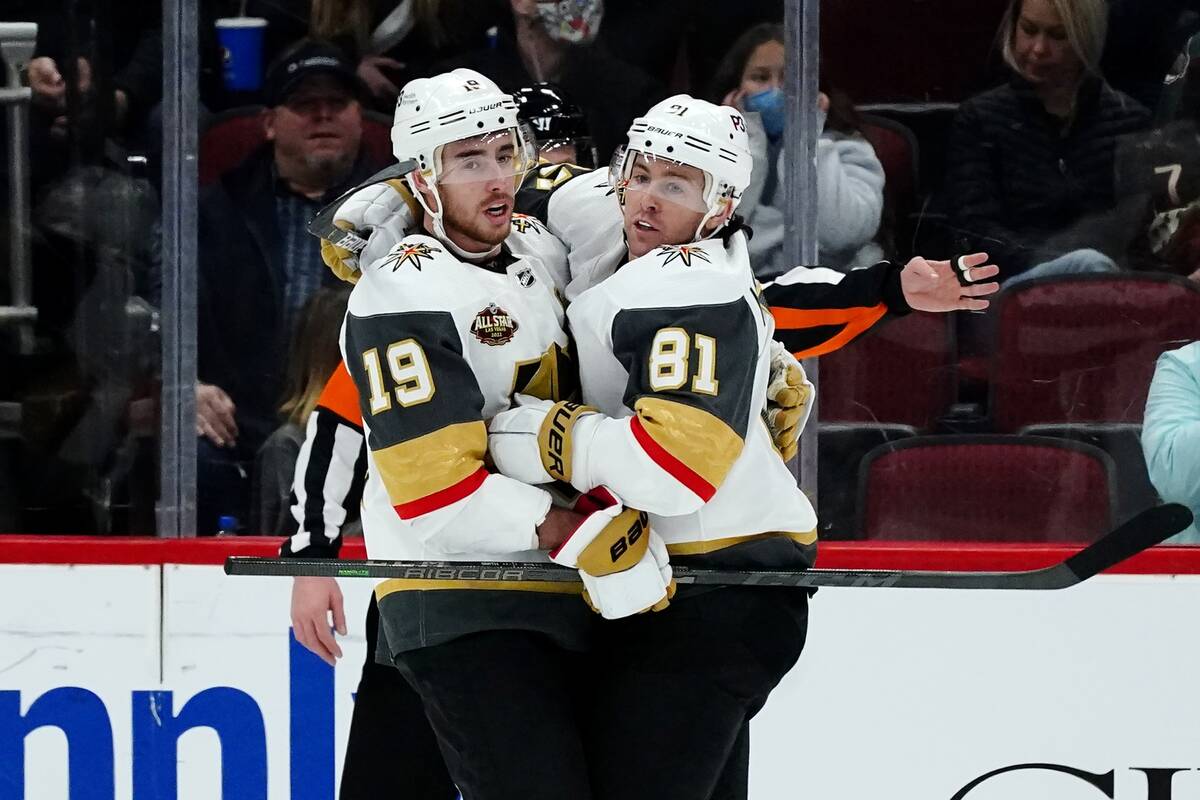 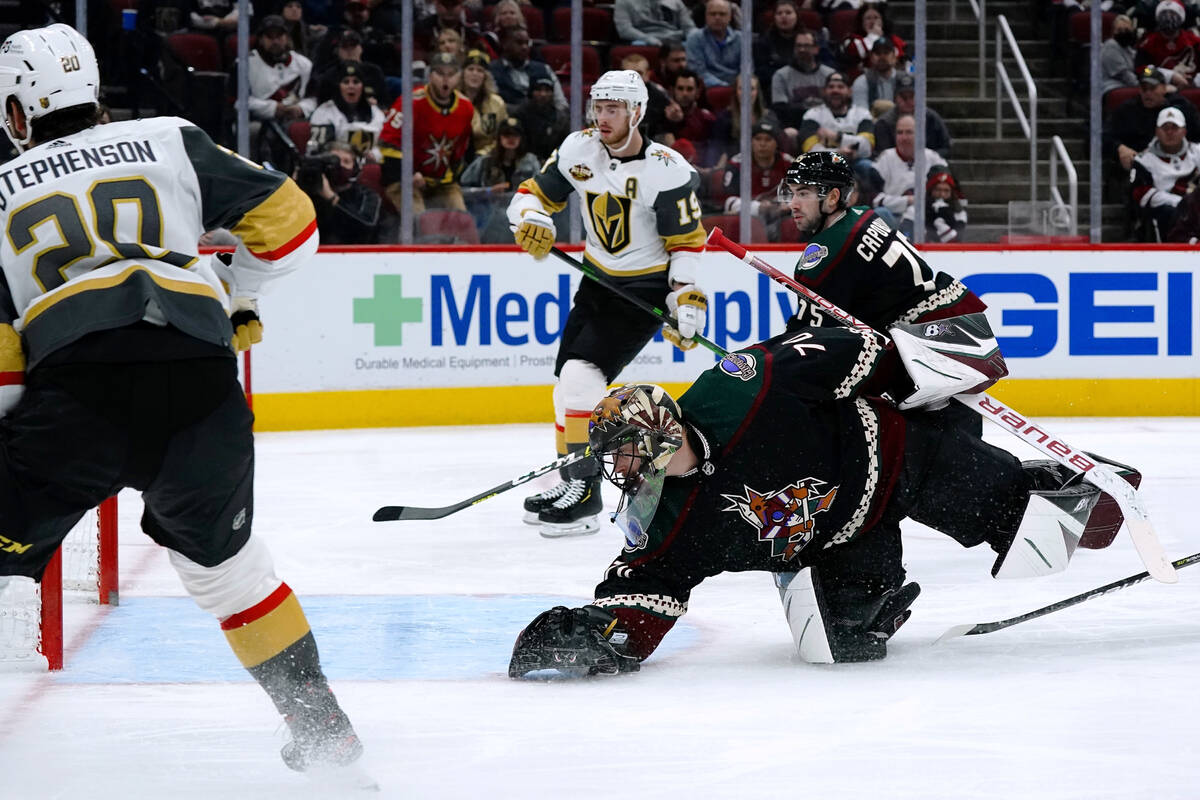 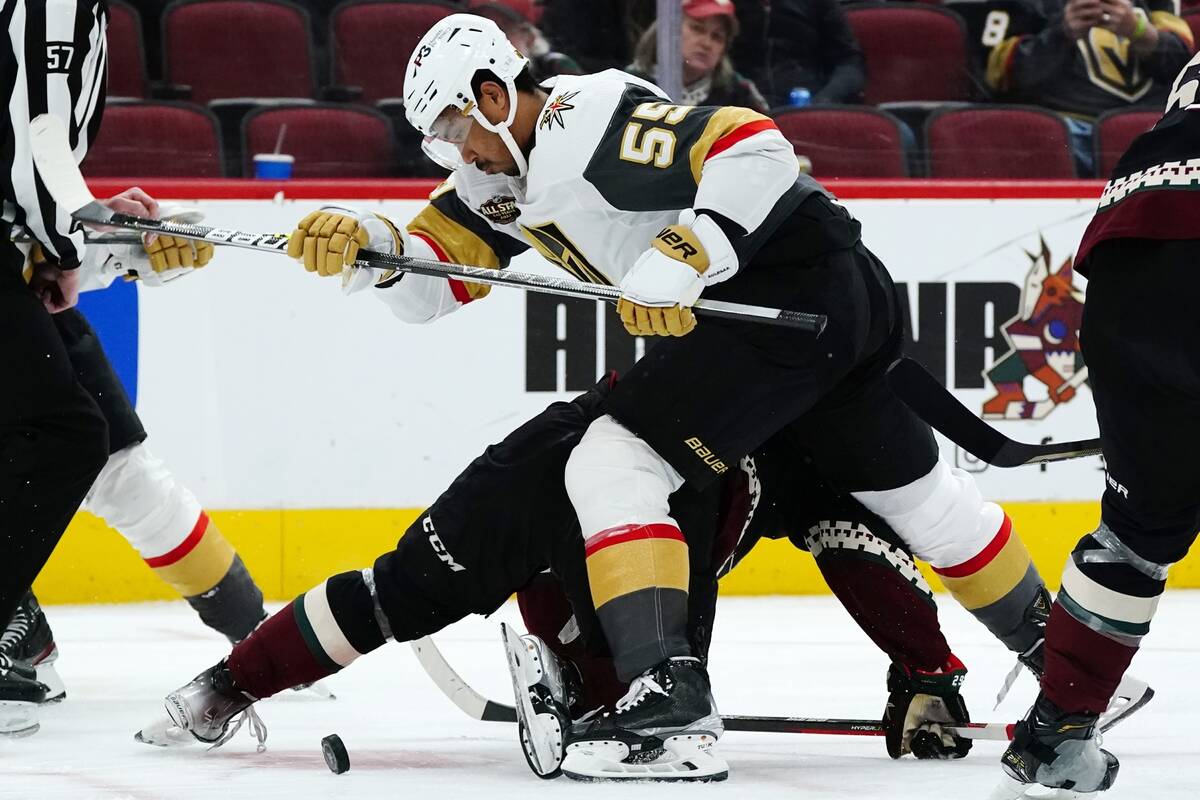 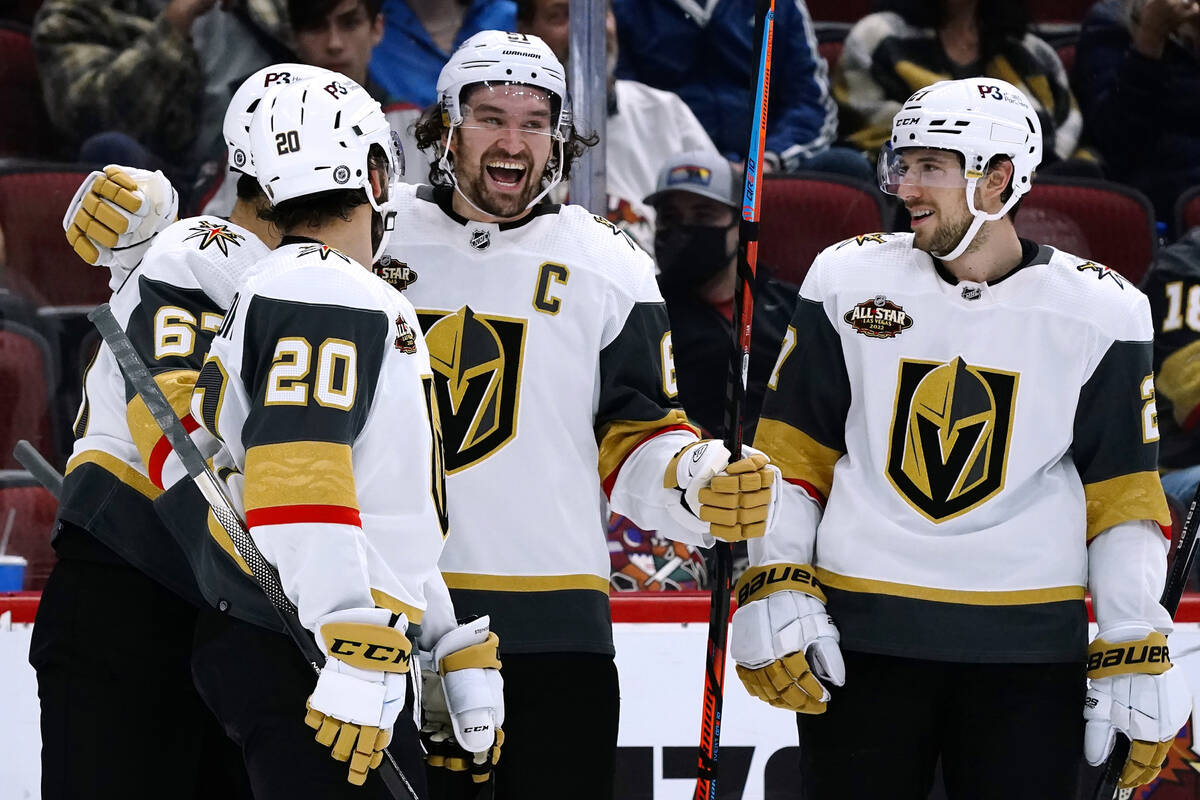 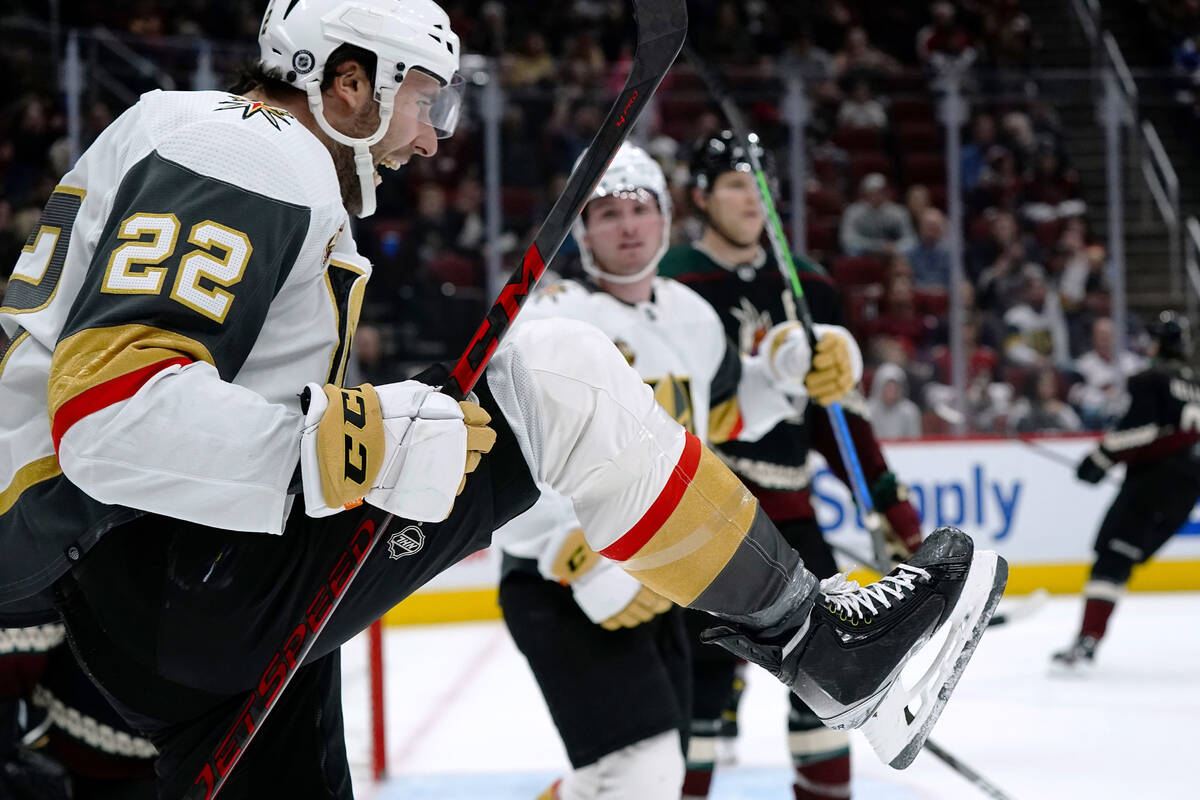 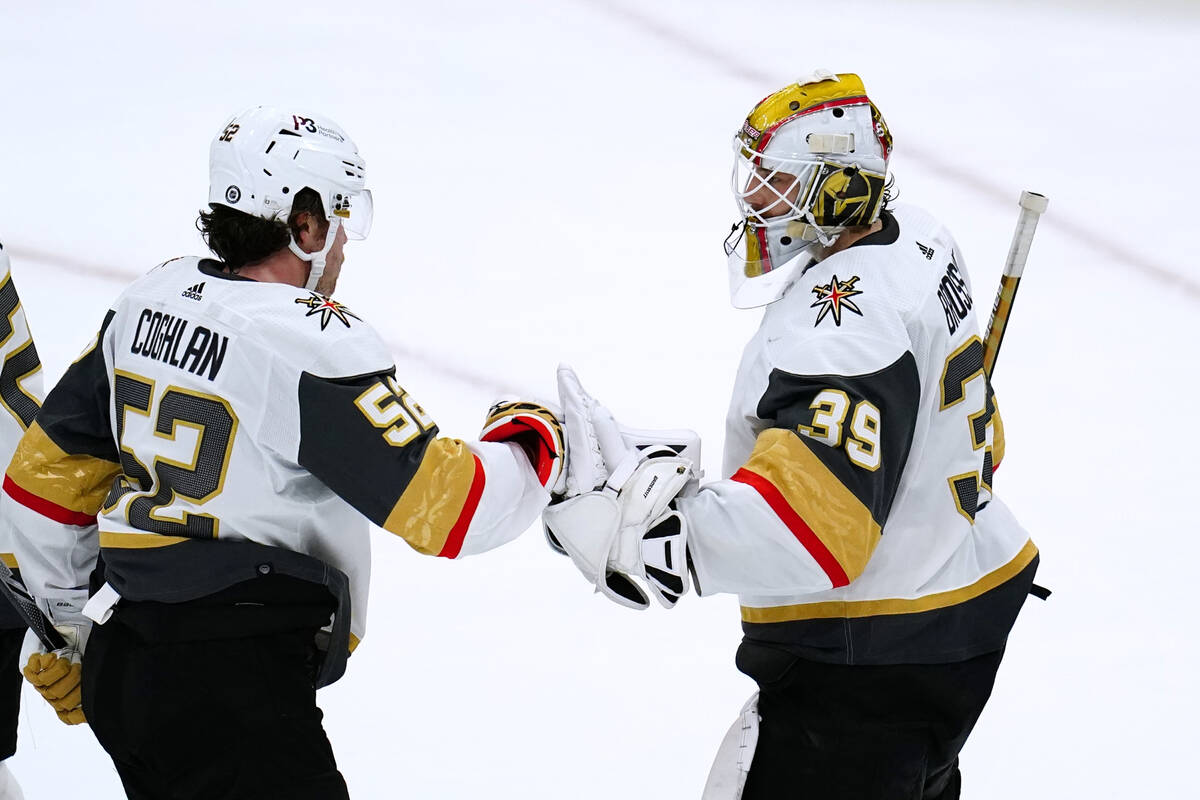 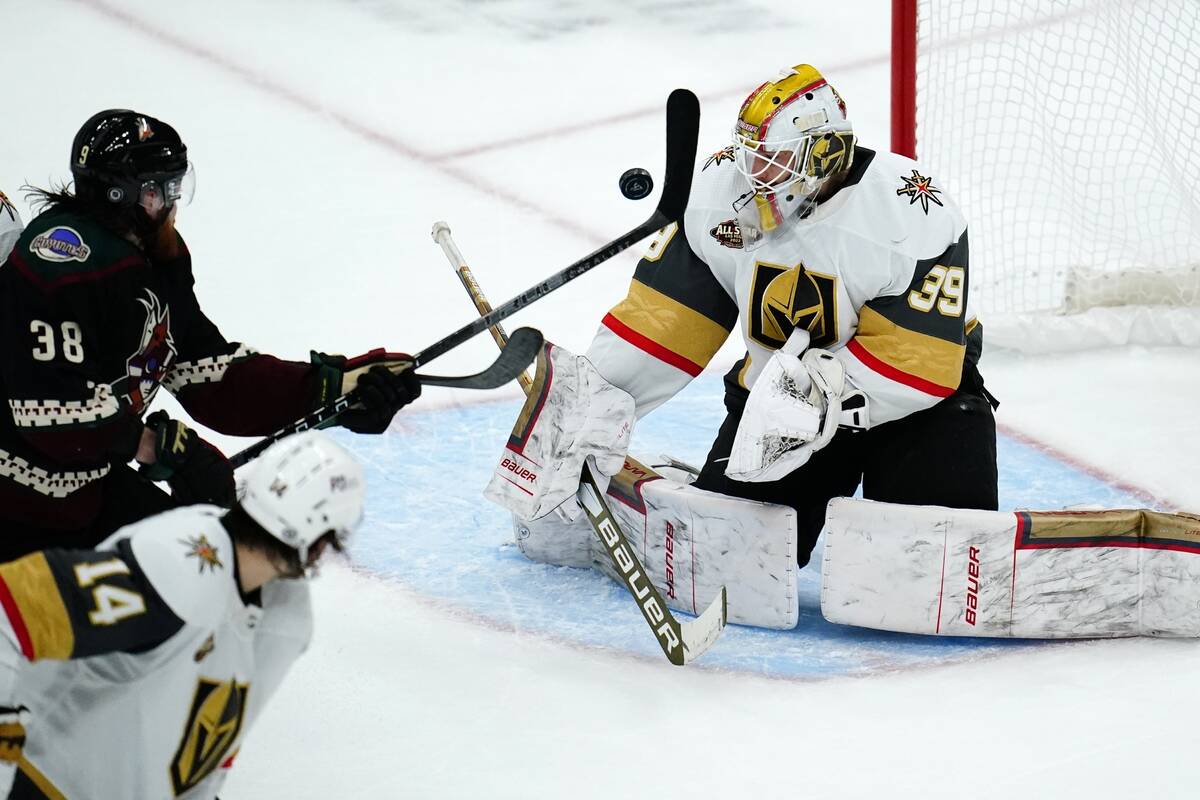 Vegas Golden Knights goalie Laurent Brossoit (39) makes a save on a shot as Arizona Coyotes center Liam O'Brien (38) is unable to get a stick on the puck and Golden Knights defenseman Nicolas Hague (14) watches during the third period of an NHL hockey game Friday, Dec. 3, 2021, in Glendale, Ariz. The Golden Knights won 7-1. (AP Photo/Ross D. Franklin) 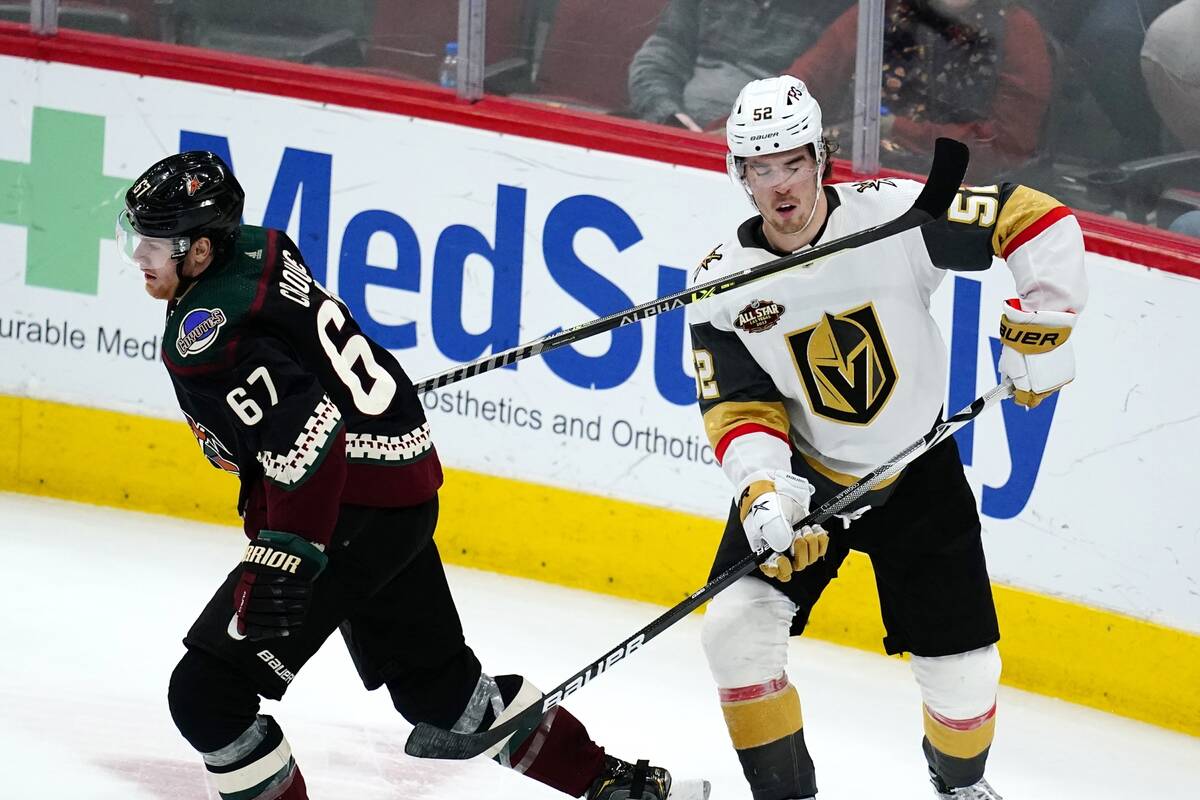 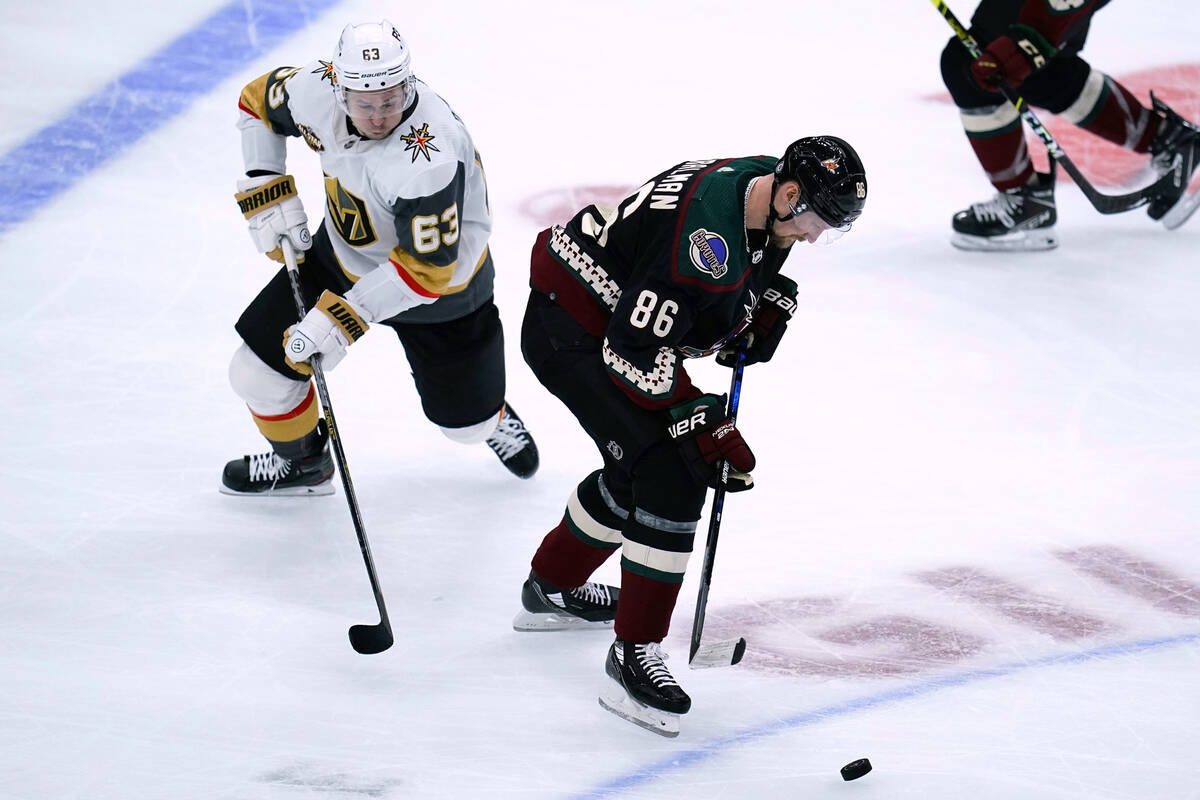 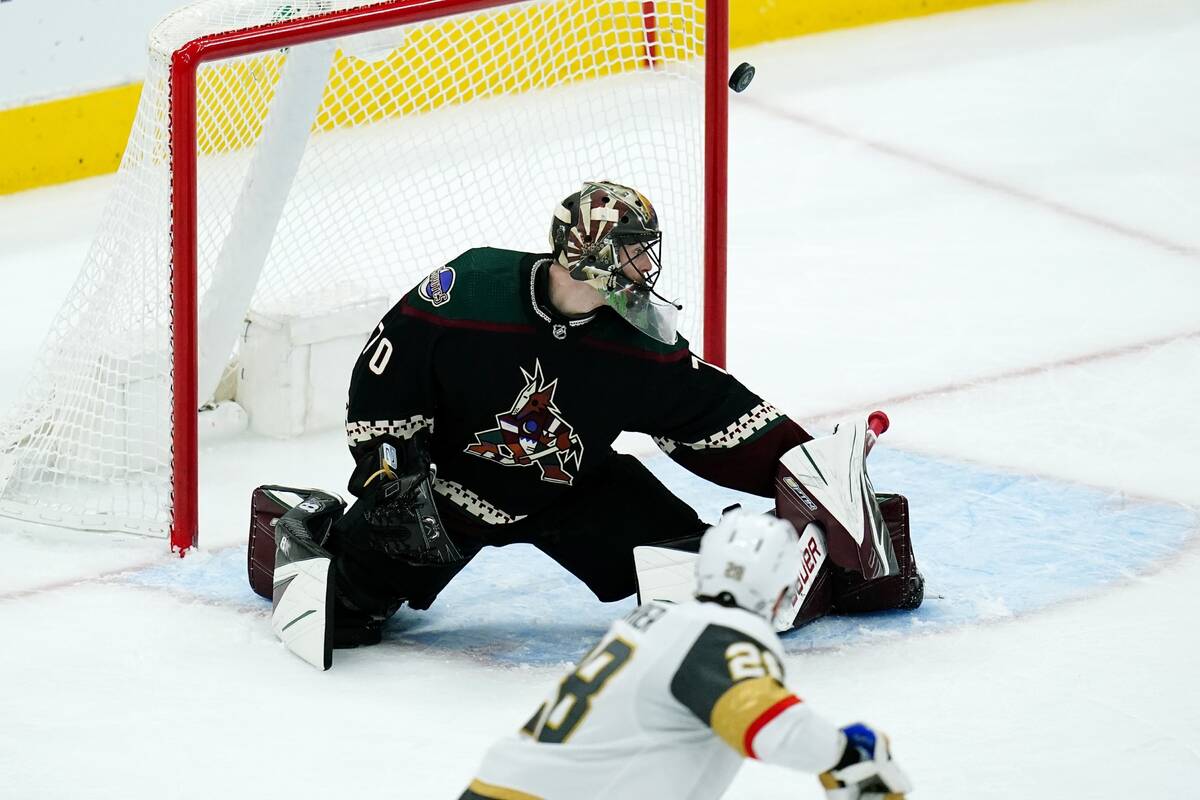 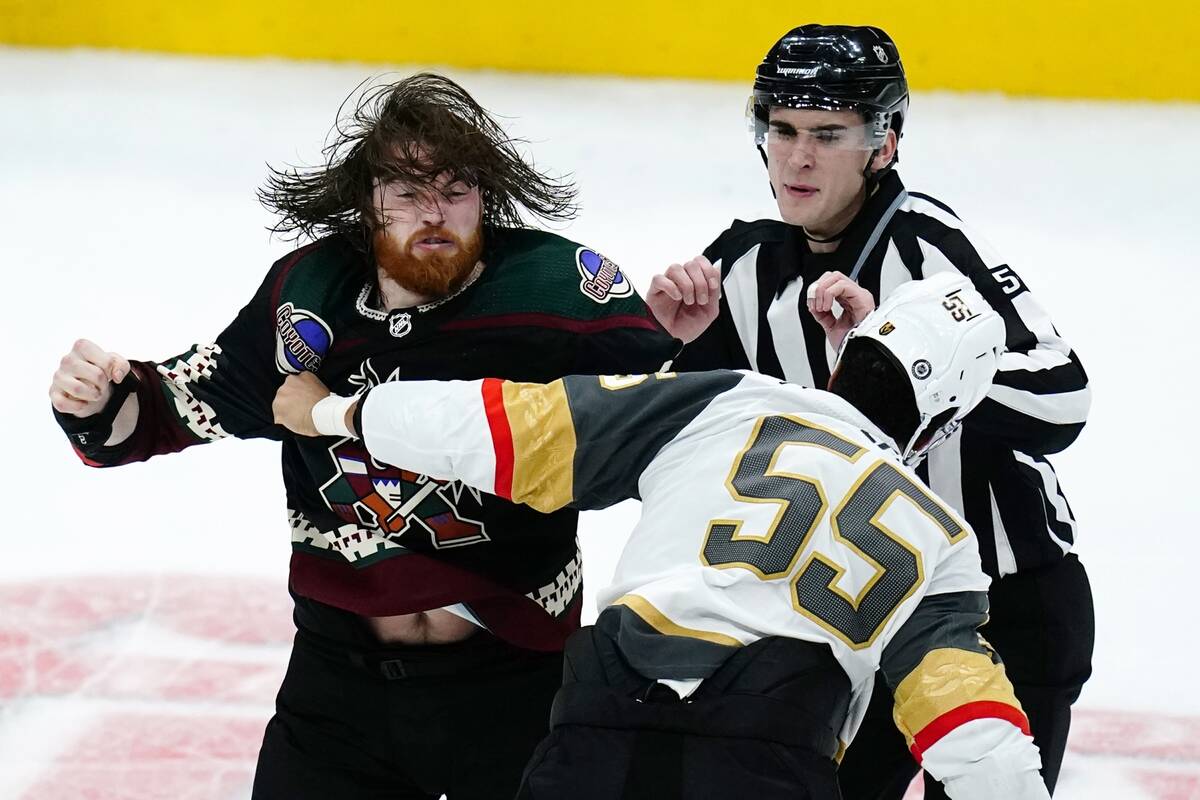 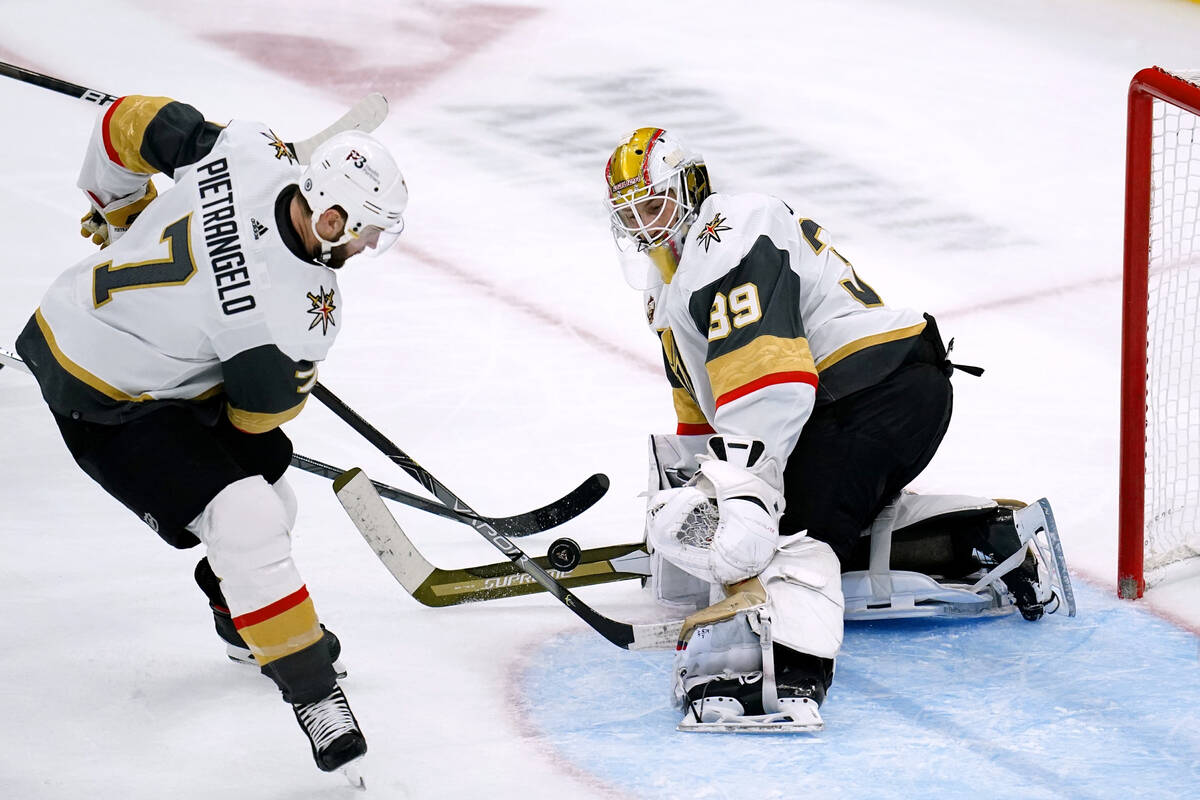 Vegas Golden Knights goalie Laurent Brossoit (39) gets help with defending against a shot by the Arizona Coyotes from defenseman Alex Pietrangelo (7) during the third period of an NHL hockey game Friday, Dec. 3, 2021, in Glendale, Ariz. The Golden Knights won 7-1. (AP Photo/Ross D. Franklin) 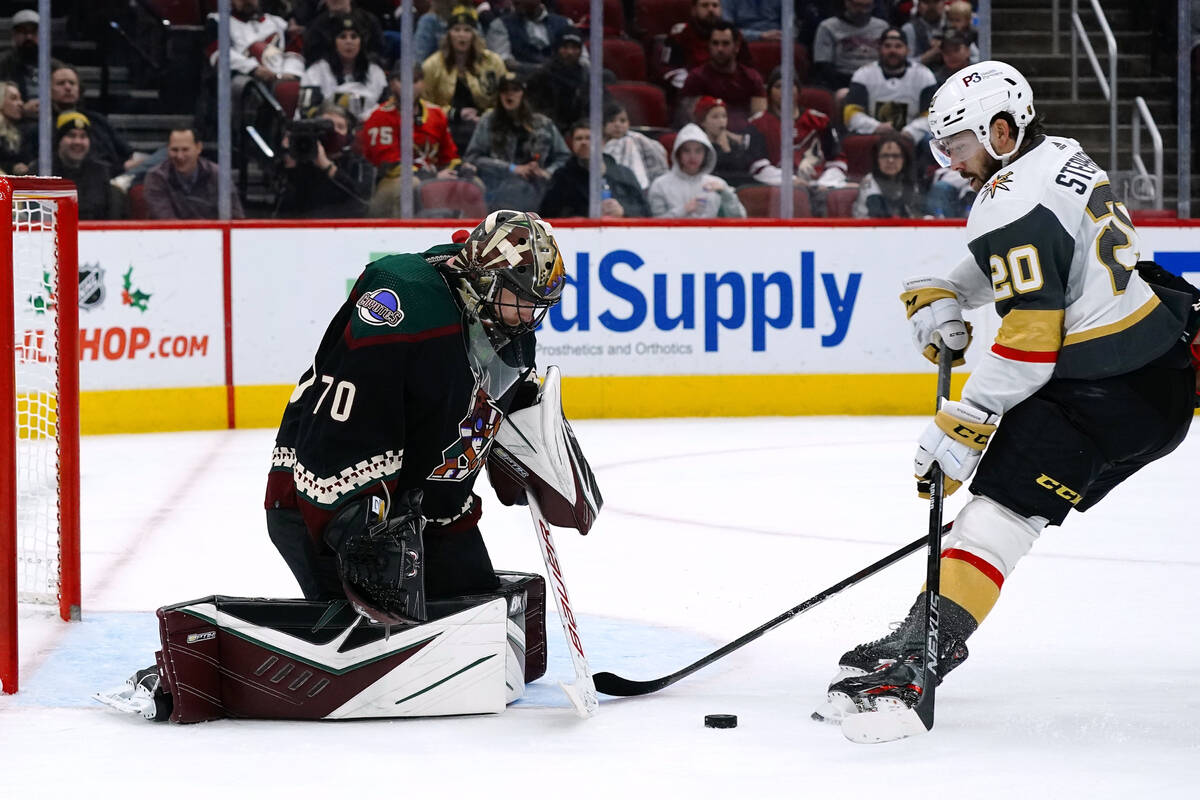 GLENDALE, Ariz. — The Golden Knights were on the verge of falling into a slump entering Friday, and a loss against the struggling Coyotes would have been cause for concern.

After a convincing 7-1 victory in front of an announced crowd of 12,389 at Gila River Arena, the Knights were feeling like themselves again.

The Knights had lost two straight and three of four before routing the Coyotes.

Michael Amadio had his first goal since Dec. 14, 2019, and added an assist. The Knights scored at even strength, on the power play and short-handed, with 14 of their 18 skaters recording at least one point against their former Pacific Division rivals.

“We were opportunistic, but I liked our game a lot better than I did the other night in Anaheim,” coach Pete DeBoer said. “We talked about not digging ourselves a hole early in games like we have been lately. I thought we did all those things better tonight.”

The Knights’ penalty kill could have been awarded one of the game’s stars based on its work in the second period alone and finished 3-for-3 while allowing five shots.

Chandler Stephenson and Reilly Smith used their speed to create a two-on-one rush that Stephenson finished off for a 3-1 lead. That sparked a four-goal outburst by the Knights, matching their season high for a period.

It was the team’s fifth short-handed goal in the past six games and sixth overall, which leads the NHL.

“Our special teams tonight were big,” Marchessault said. “We were able to get that first goal on the power play and after the (penalty kill) … definitely gave us a lot of momentum.”

On the Knights’ first penalty kill, Stephenson, Mark Stone, Brayden McNabb and Zach Whitecloud killed all two minutes by themselves.

Meanwhile, the power play’s improvement has coincided with Pacioretty’s return. He scored with the man advantage in the first period after the Knights went 2-for-4 on Wednesday at Anaheim and were threatening in their one attempt against Edmonton.

“You put guys like that with the puck on their stick with a little bit of room … and he’s one guy that doesn’t need a lot of opportunity,” DeBoer said.

Laurent Brossoit earned his first start since Nov. 20 and was solid again, turning away 29 of the 30 shots he faced.

The only puck to get past the Knights goalie came in the first period when Tyler Boyd finished off a two-on-one rush with Clayton Keller.

Brossoit won his third straight decision and improved to 4-1 with a 2.46 goals-against average and solid .921 save percentage.

He came up with back-to-back stops on Barrett Hayton in the first period moments before Marchessault finished off a two-on-one with Nicolas Roy for a 1-0 lead at 6:58.

Stone was in the lineup after officially being a game-time decision, and the captain appears to have avoided a serious injury.

Stone was hurt in Wednesday’s 6-5 loss at Anaheim when he crashed into the end boards after being hooked by Ducks center Derek Grant in the third period. The right wing remained on the ice and was looked at by the trainer before he headed to the locker room favoring his right shoulder.

Stone returned less than five minutes later and finished with 20:36 of ice time against the Ducks, including 7:15 in the third period as the Knights tried to rally from multiple two-goal deficits.

“When he initially went down, it didn’t look good, and obviously as a coach that’s a guy you can’t afford to lose for another lengthy absence,” DeBoer said.