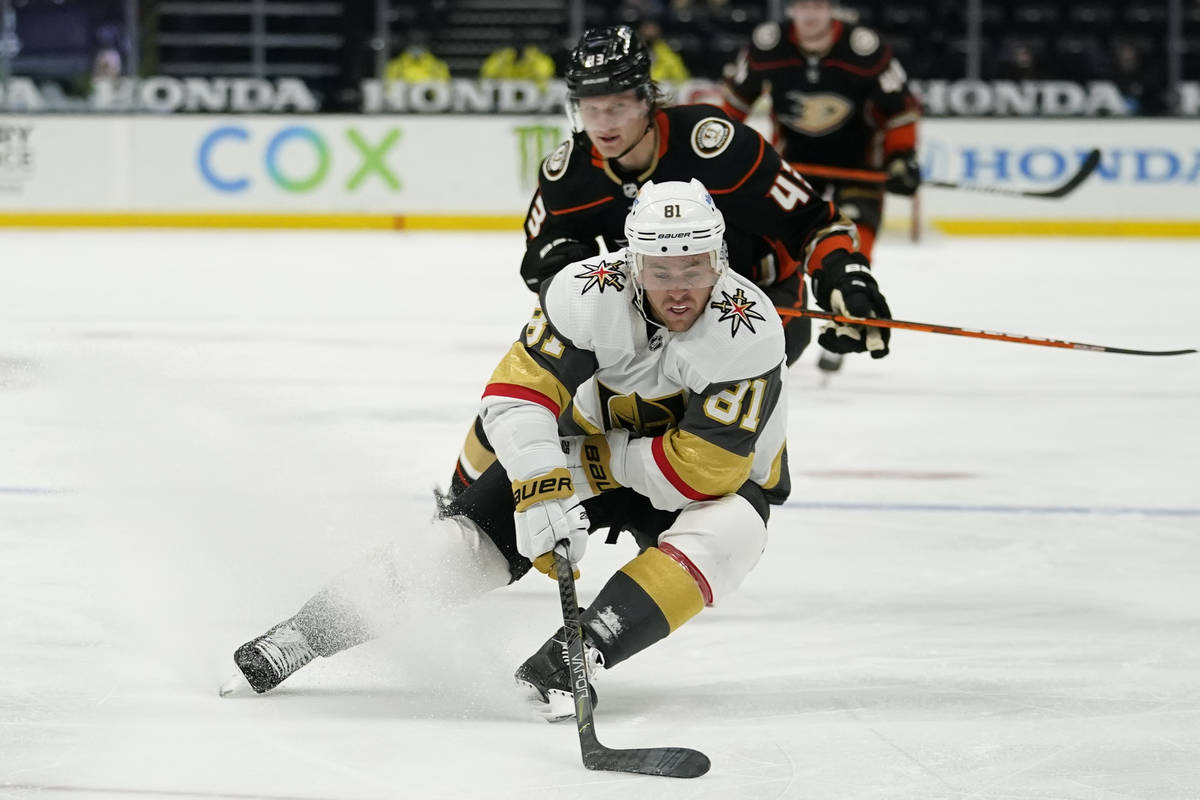 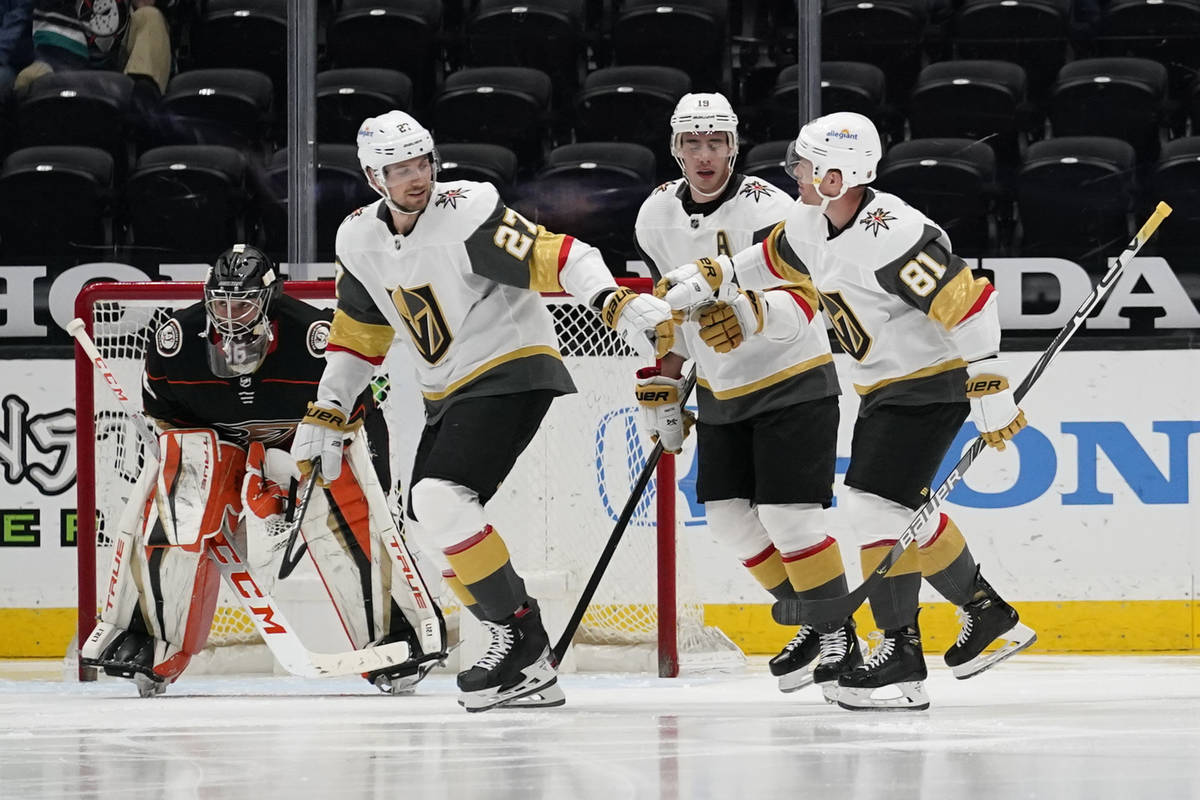 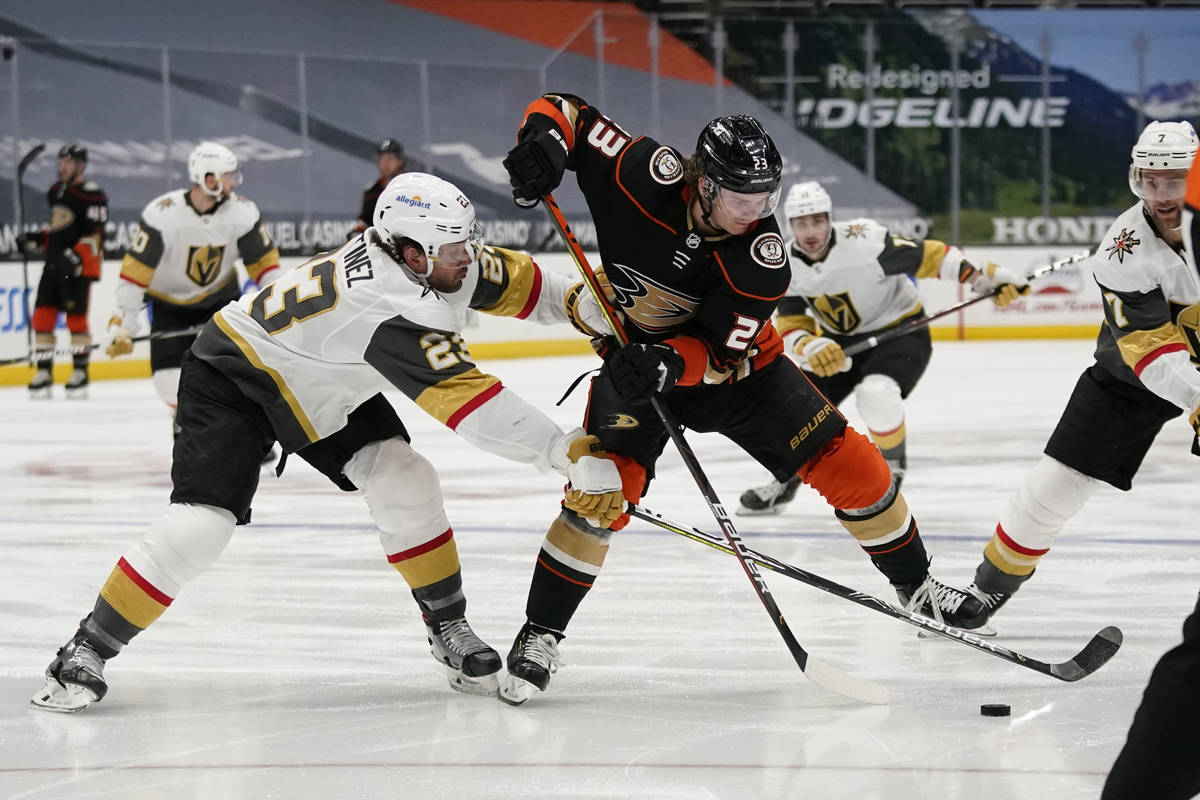 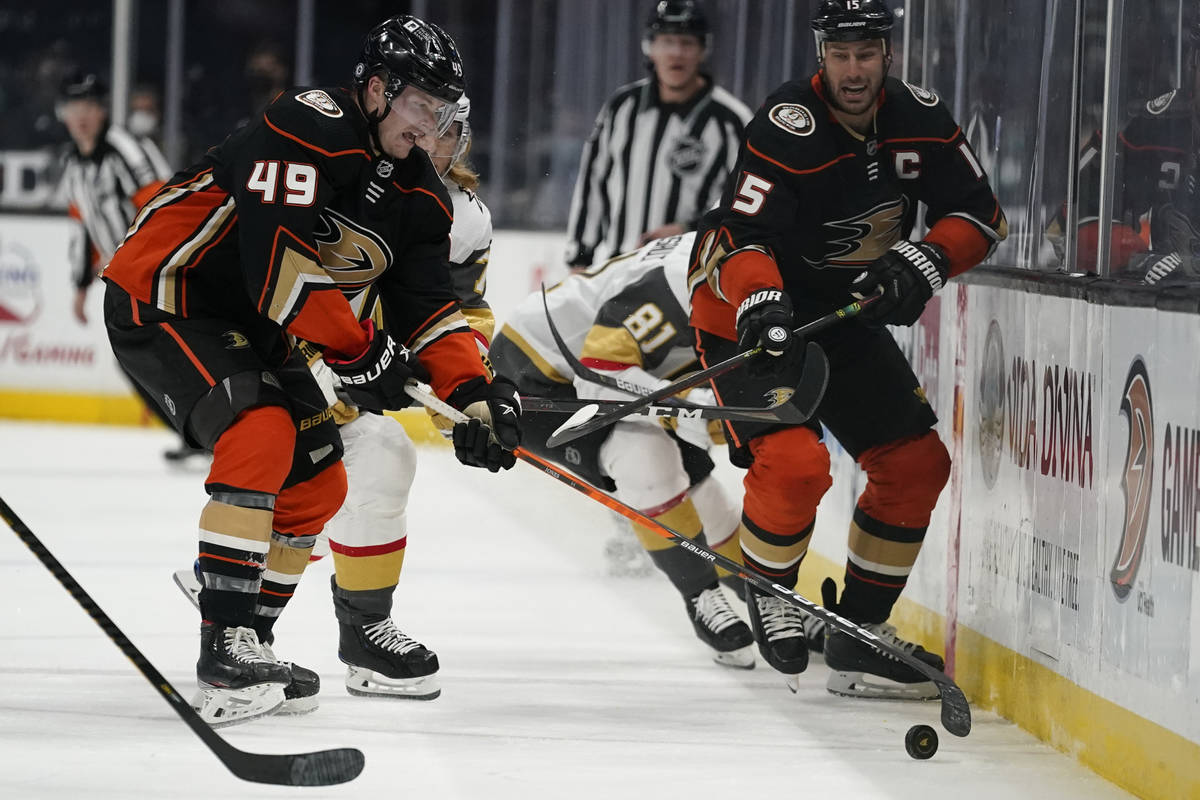 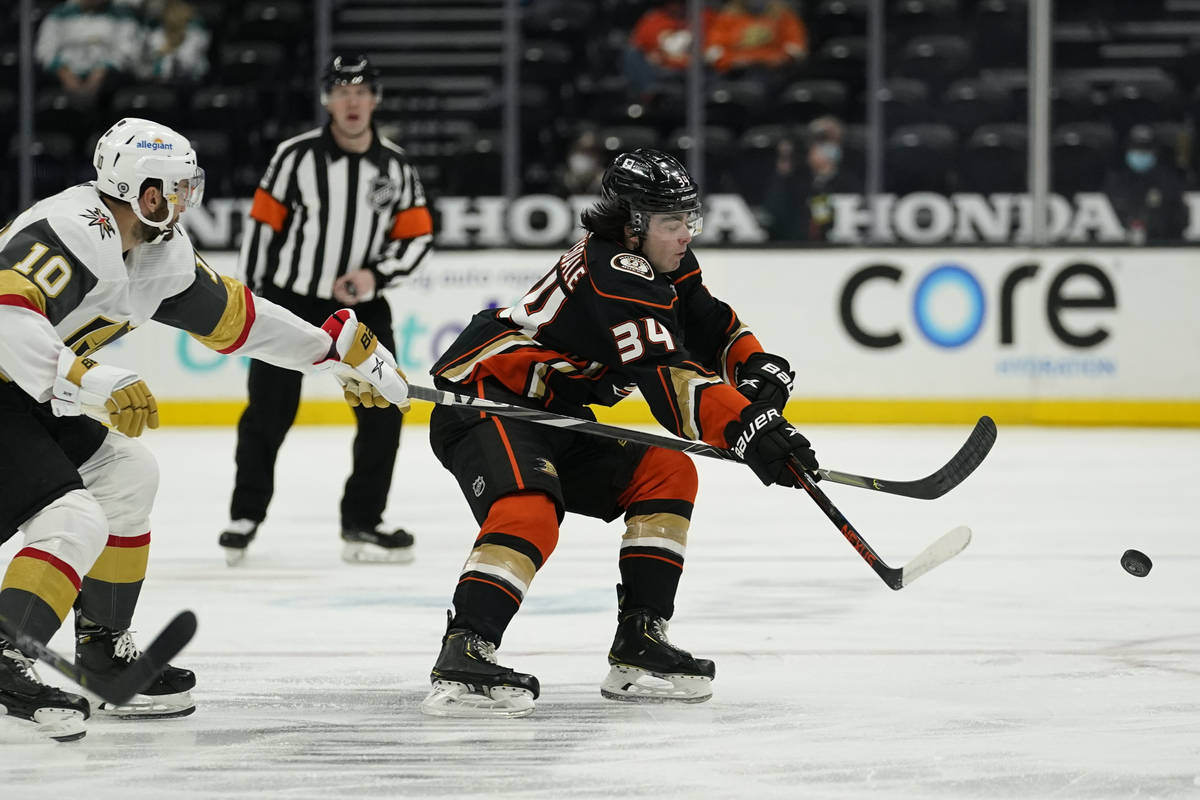 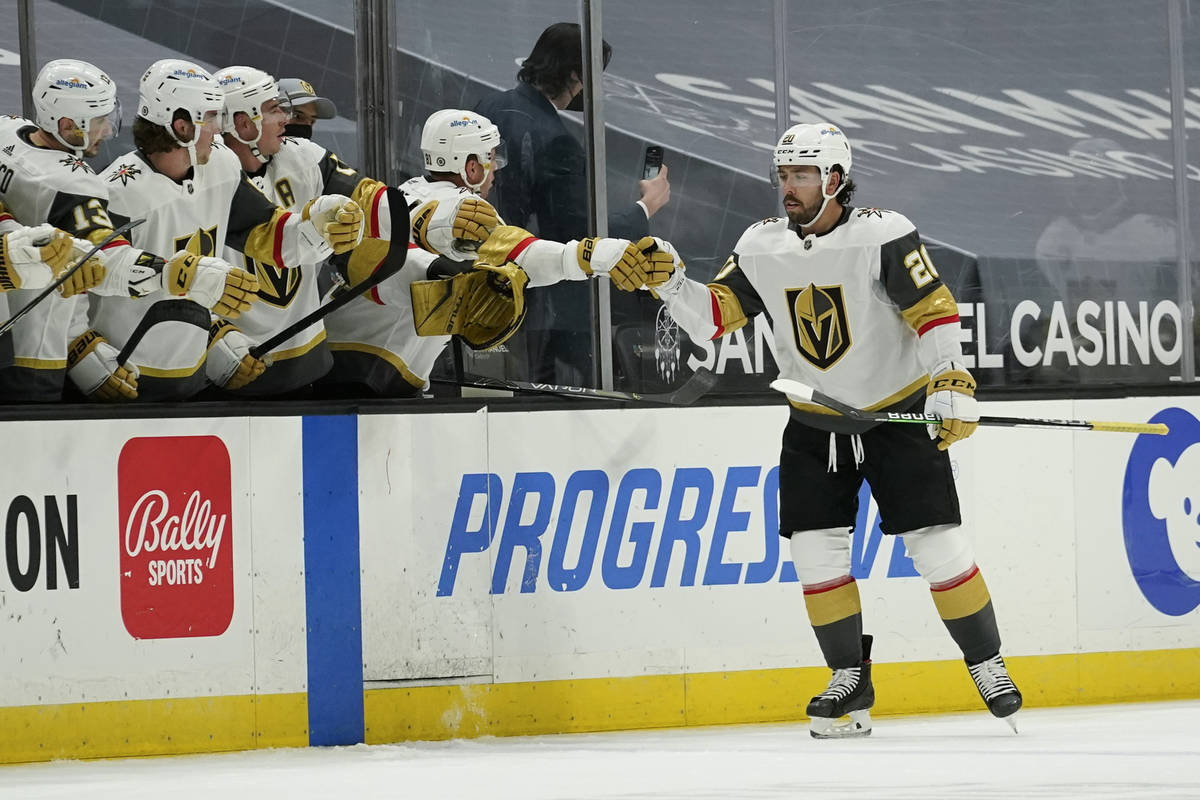 Vegas Golden Knights center Chandler Stephenson (20) celebrates with his teammates after scoring a goal during the second period of an NHL hockey game against the Anaheim Ducks Friday, April 16, 2021, in Anaheim, Calif. (AP Photo/Ashley Landis) 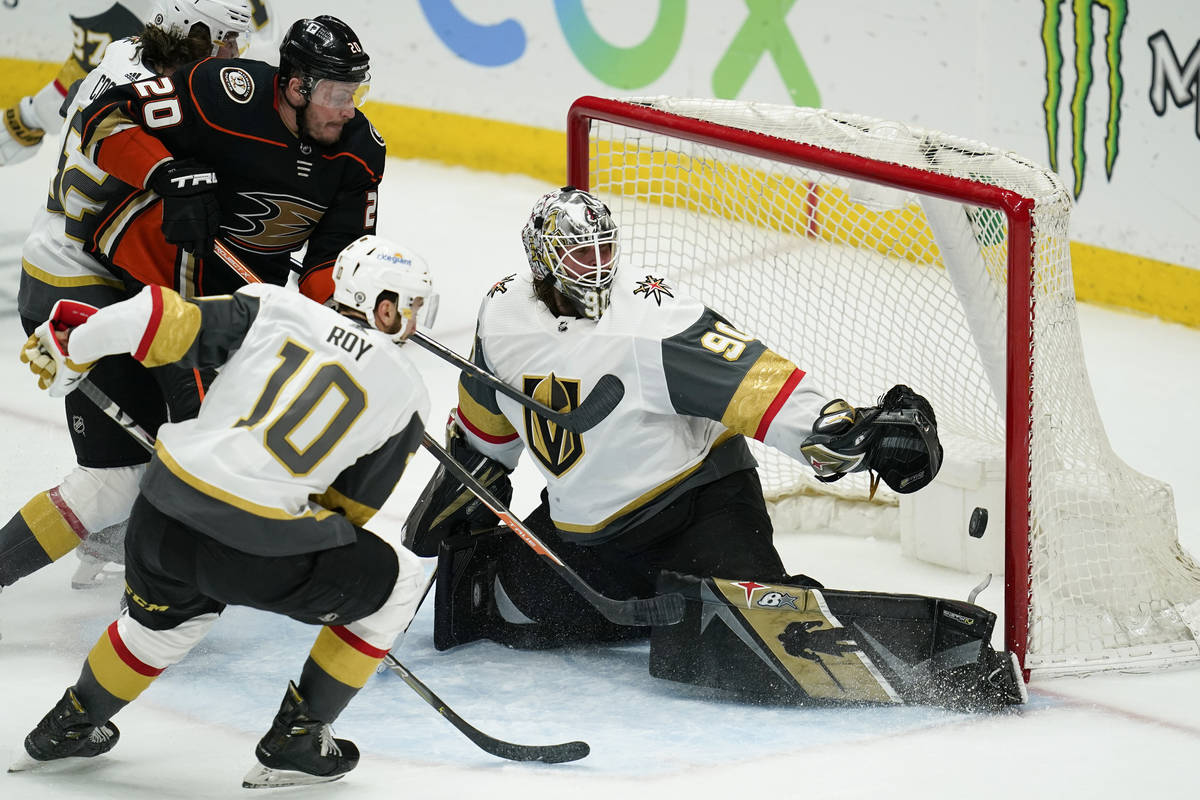 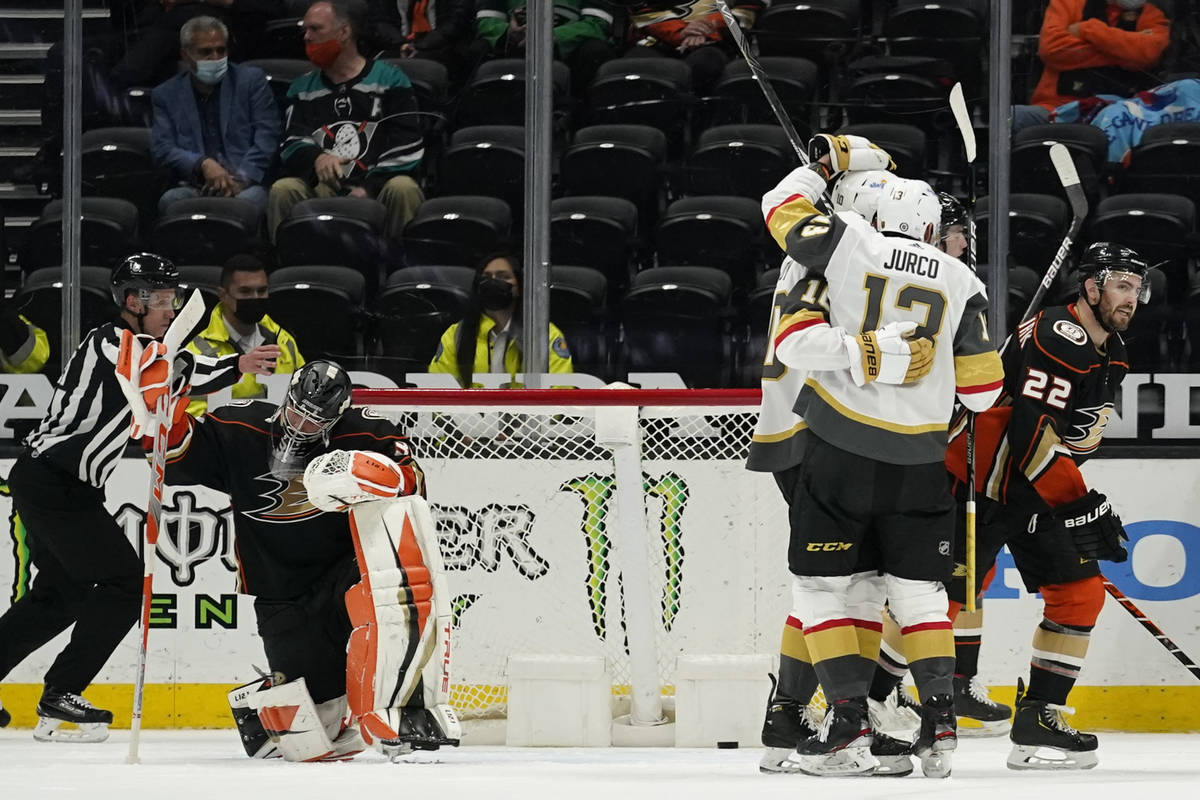 ANAHEIM, Calif. — Ducks forward Jakob Silfverberg fired a 125-foot shot from his own zone in the final three minutes that Robin Lehner easily gloved down.

The small crowd at Honda Center followed with a Bronx cheer at the sight of a puck reaching the Golden Knights goalie.

Lehner was hardly tested Friday in his first shutout this season, and the Knights rolled to a 4-0 victory over host Anaheim.

“There’s still some grade-A chances in there that they have to be sharp on that can change the momentum of the game,” coach Pete DeBoer said. “Even though they didn’t have a lot of quantity, they had some quality looks and (Lehner) had to make some saves or the momentum of that game maybe shifts.”

The Knights (30-11-2, 62 points) won their fifth straight game and joined Colorado as the only teams in the league with 30 victories.

William Karlsson scored nine seconds into the second period to ignite a three-goal period. Chandler Stephenson finished with a goal and an assist, and he nearly had a second goal but was denied on a penalty shot in the third period by Ducks goalie John Gibson.

“We played our game and we got rewarded,” defenseman Brayden McNabb said. “We’re getting down to the stretch. We want to be playing our game at this time in the stretch run so we’re ready for the playoffs.”

The Ducks welcomed back fans for the first time since March 11, 2020, but they saw the Knights carry play throughout.

The Knights, who played without red-hot Tomas Nosek because of an undisclosed injury, matched their season high for shots in a game with 51.

Reilly Smith and Alex Tuch each finished with a team-best six shots on goal.Defensemen Nic Hague and Zach Whitecloud, along with forward William Carrier, were the only players not to register a shot on goal.

“I think the best defense is the offense,” forward Nicolas Roy said. “I think we were in their face the whole night. We kept the puck 200 feet from our zone. We had a lot of shots, and I think that was the key tonight.”

Lehner finished with 16 saves, and had to be sharp on Max Jones’ rebound attempt with about 13:30 remaining in the third period.

The victory was Lehner’s fourth straight to improve to 10-1-2. He has stopped 192 of the 205 shots he’s faced since returning from concussion.

Roy tallied his fourth goal late in the second, and McNabb finished off a strong game on the back end by scoring in the third period. Mark Stone added two assists.

“I like how we played tonight,” DeBoer said. “I don’t know if it’s the most complete but I think we’re starting to feel like our game is going for longer periods in the right direction. We’re starting to dictate games pretty consistently here, which is what you want to do down the stretch.”

The Knights registered 11 of the game’s first 12 shots on goal and Gibson was forced into a handful of key stops during the first period to keep the game scoreless.

But the Knights wasted no time getting on the board in the second. Reilly Smith drove hard to the net after the Knights worked a set play off the opening faceoff, and Karlsson was there to sweep in the loose puck nine seconds in.

Karlsson has four goals in six games against the Ducks, who drafted him in 2011, and 11 overall.

“Let’s just say everyone knew what they were doing,” Karlsson said. “It was very well executed. I just have to be there to pick up a loose puck and pretty much had an empty-netter.”

Stephenson scored his 10th goal, one shy of his career high, to double the Knights’ lead at 4:27 of the second.

Stone picked up a bouncing puck in the neutral zone and fed the onrushing Stephenson, who managed to stay onside and beat Gibson with a forehand move.

Roy added an insurance goal late in the second after a fantastic individual effort. He stripped Anaheim’s Max Comtois of the puck, stickhandled around defenseman Kevin Shattenkirk and roofed a shot with 21.7 seconds remaining in the period.