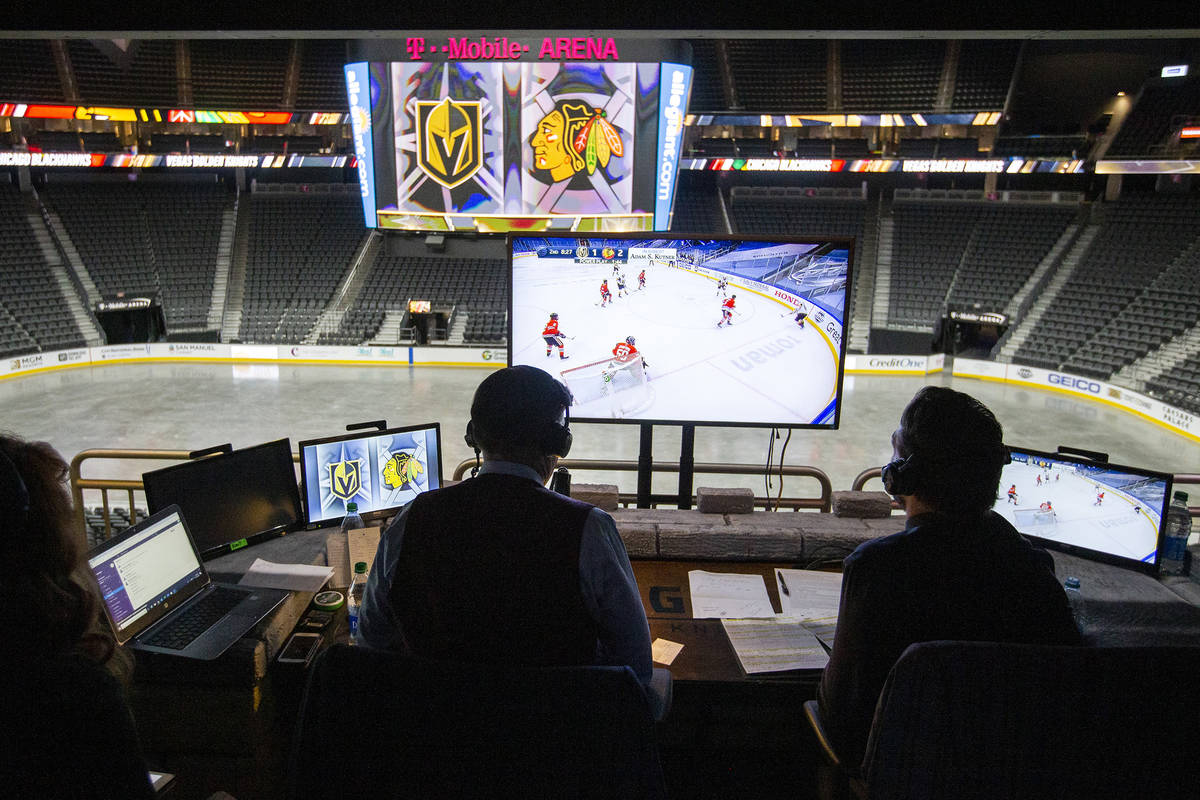 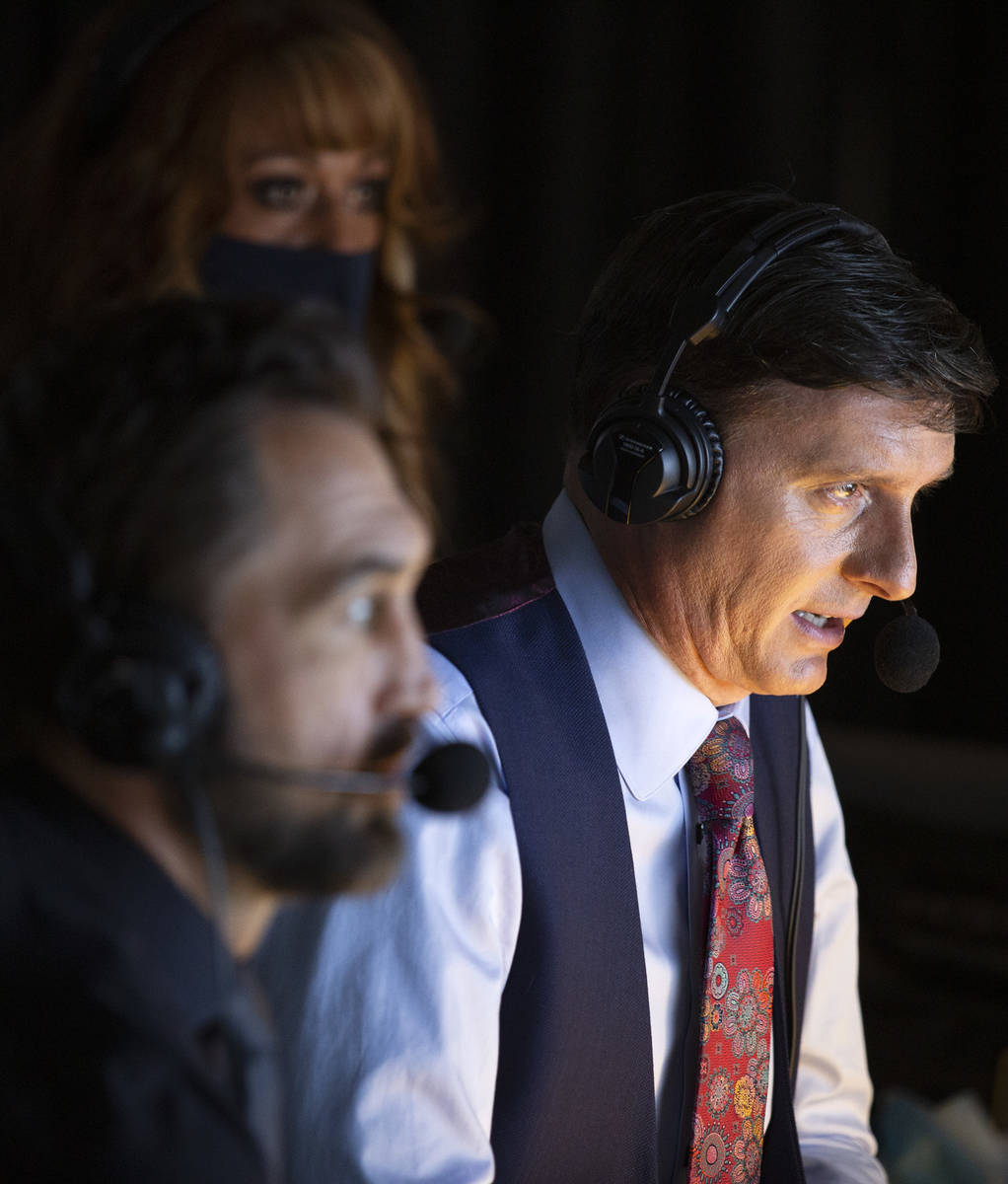 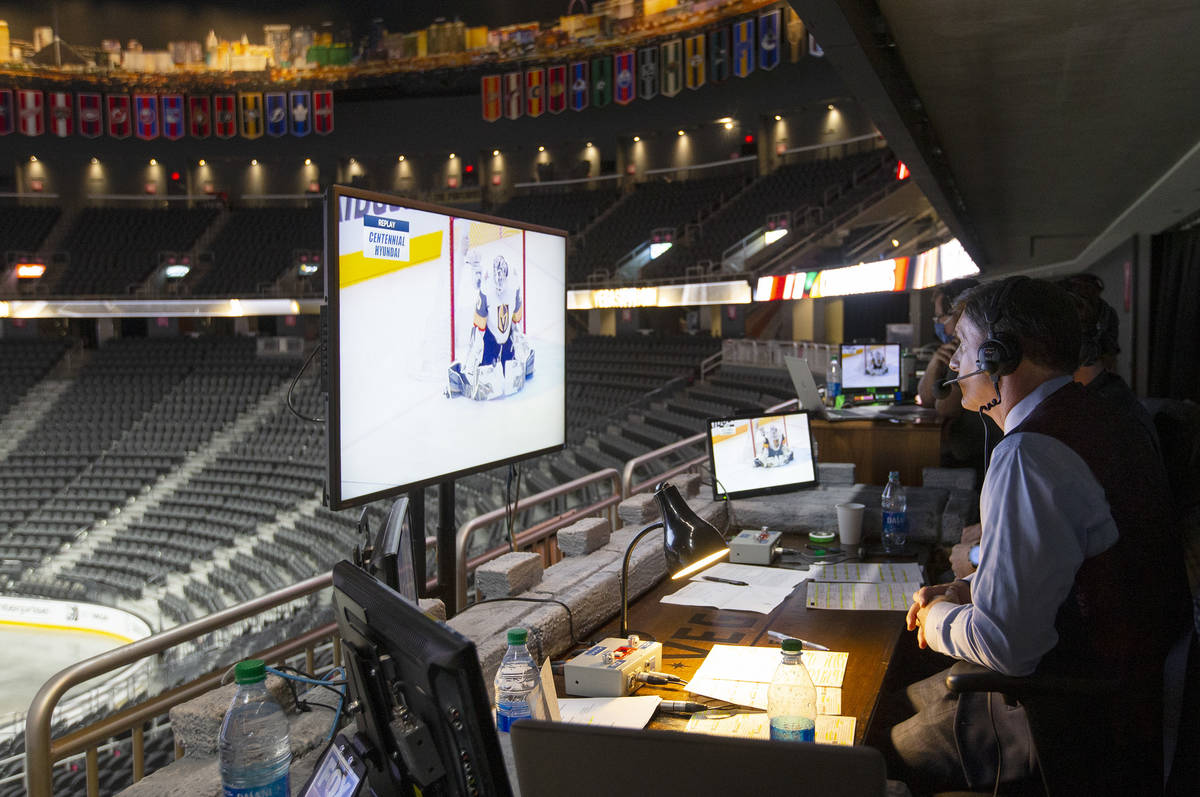 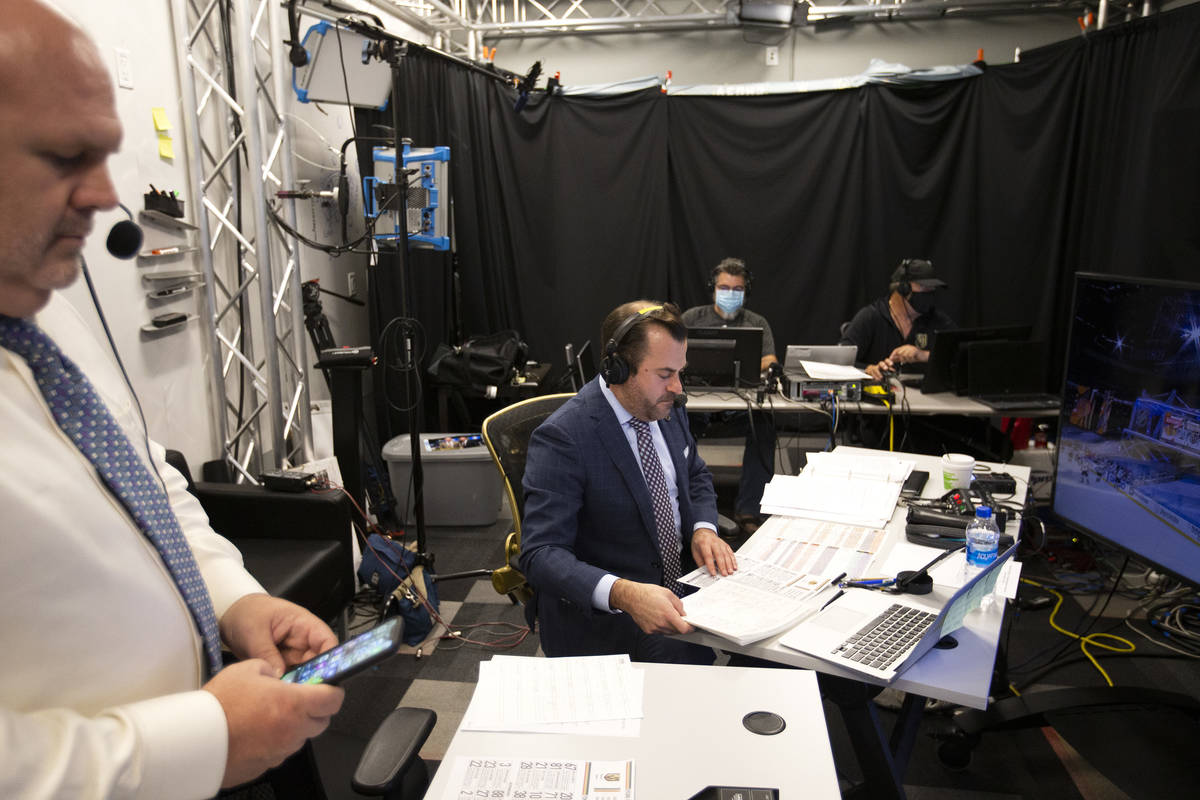 Broadcaster Dan D'Uva announces the play-by-play for the against the Chicago Blackhawks on Sunday, Aug. 16, 2020, at City National Arena in Las Vegas. Staff in the room wore masks to prevent the spread of coronavirus, while D'Uva did not. (Ellen Schmidt/Las Vegas Review-Journal) @ellenkschmidttt 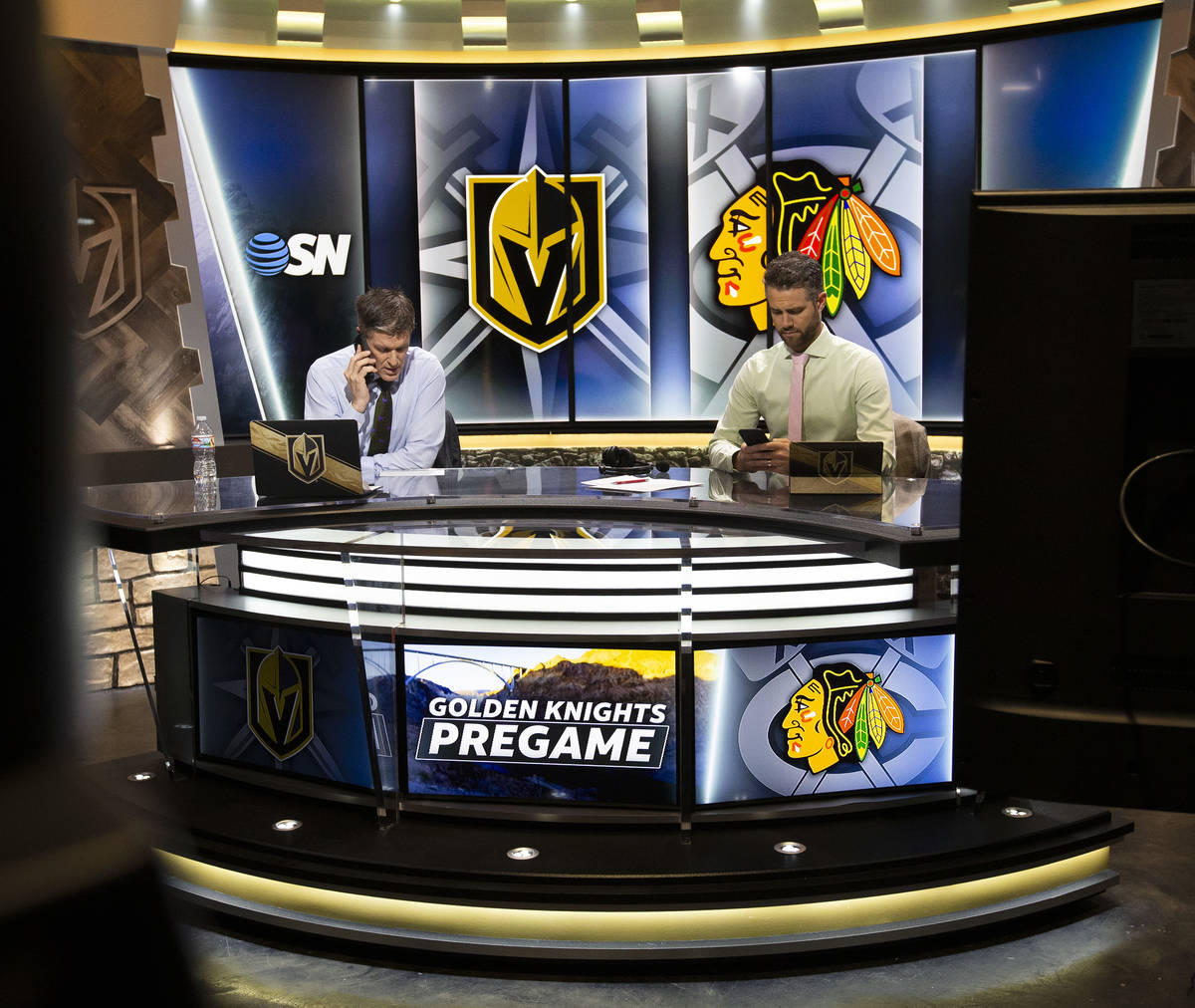 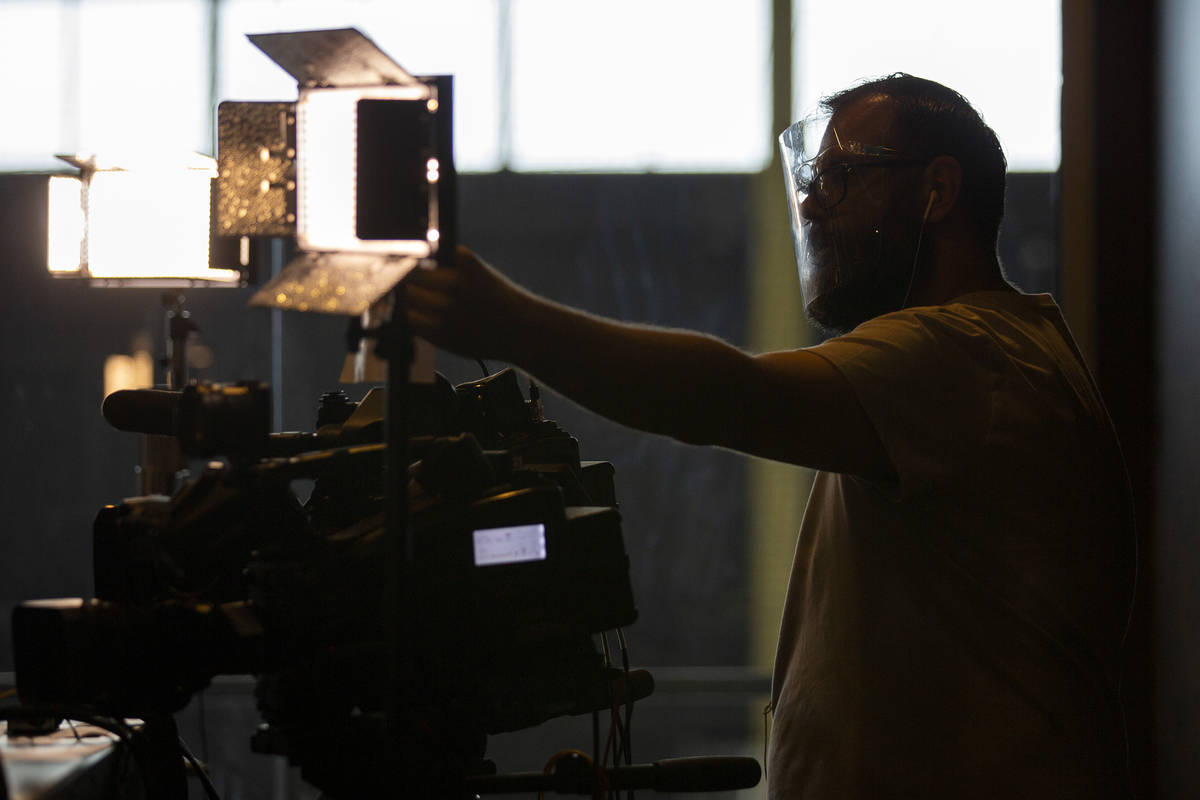 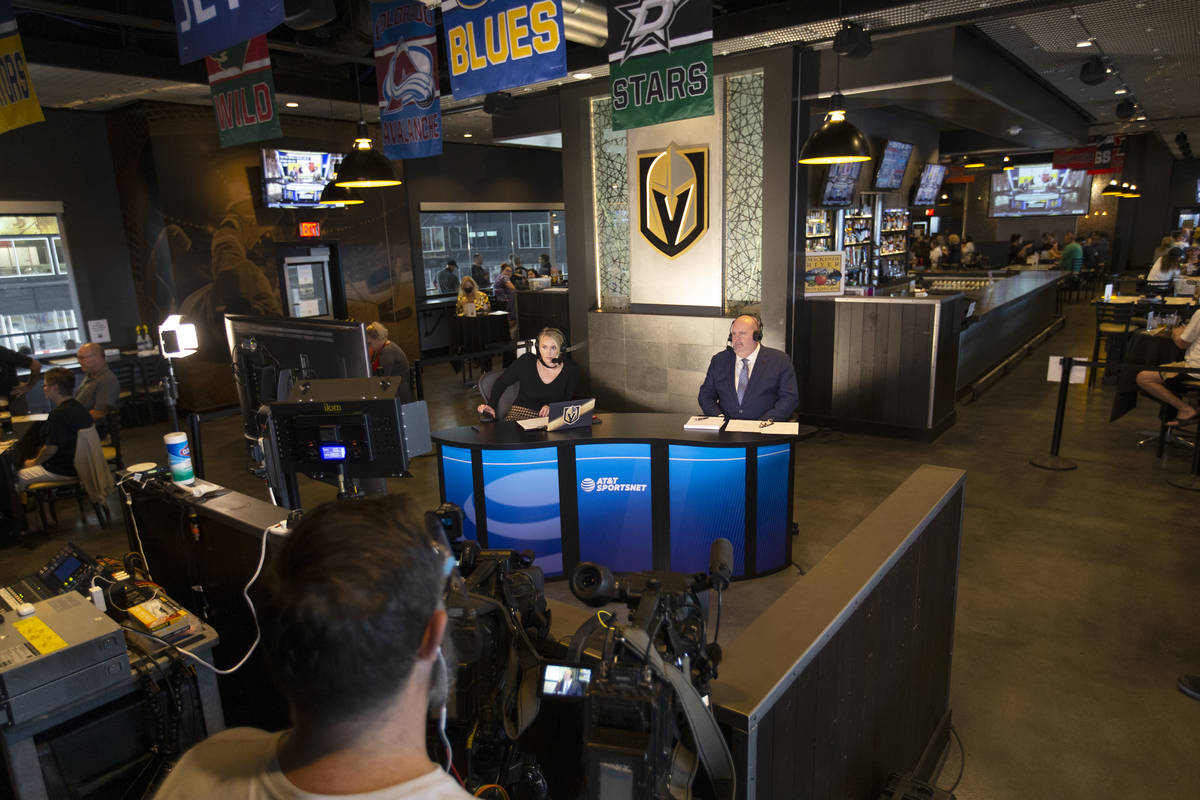 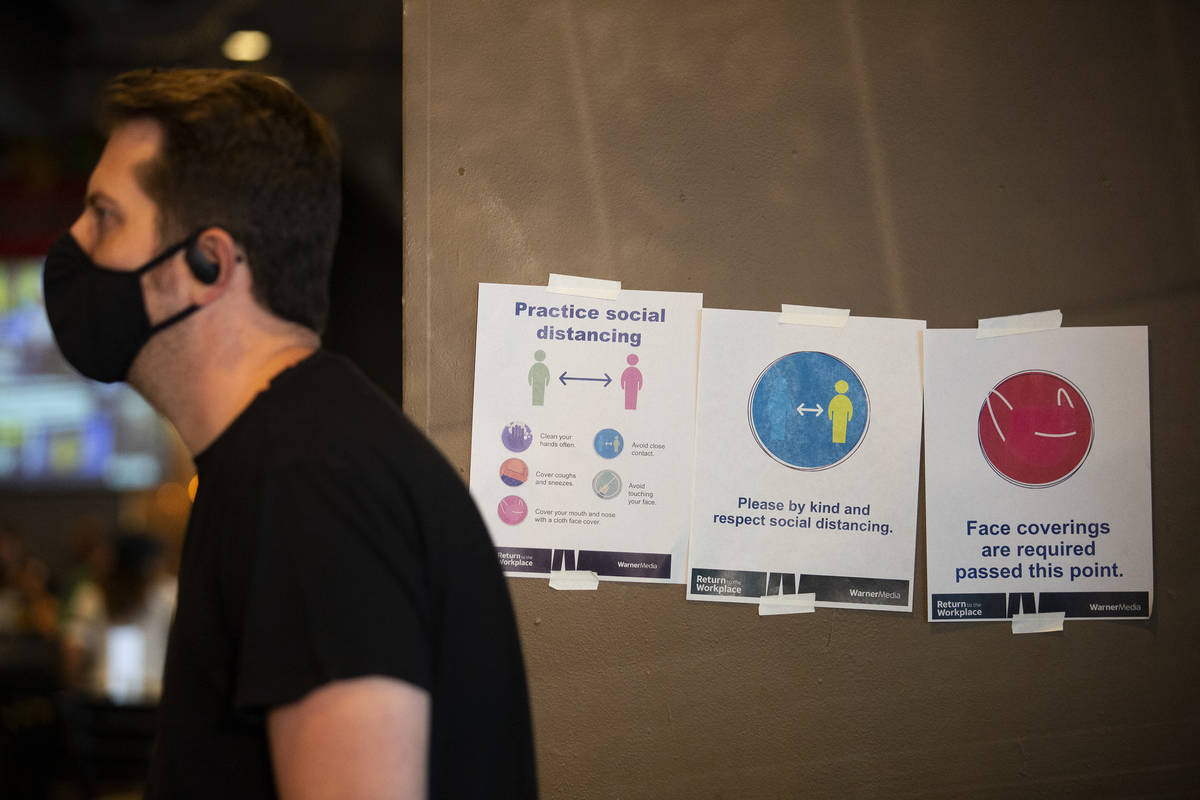 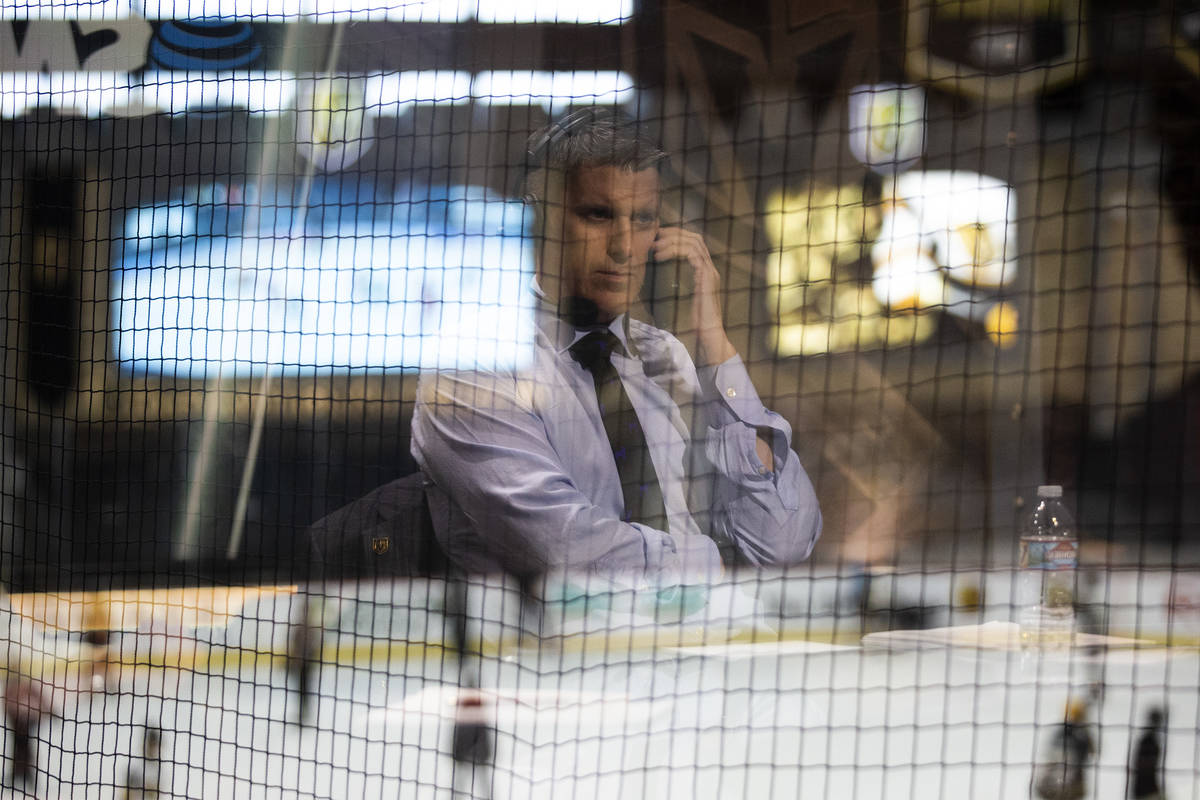 Vegas Golden Knights pregame show host Daren Millard is reflected in the window while he answers a phone call before the show begins on Sunday, Aug. 16, 2020, in Las Vegas. The show is filmed at City National Arena, where a childen's hockey practice is seen through the window. (Ellen Schmidt/Las Vegas Review-Journal) @ellenkschmidttt 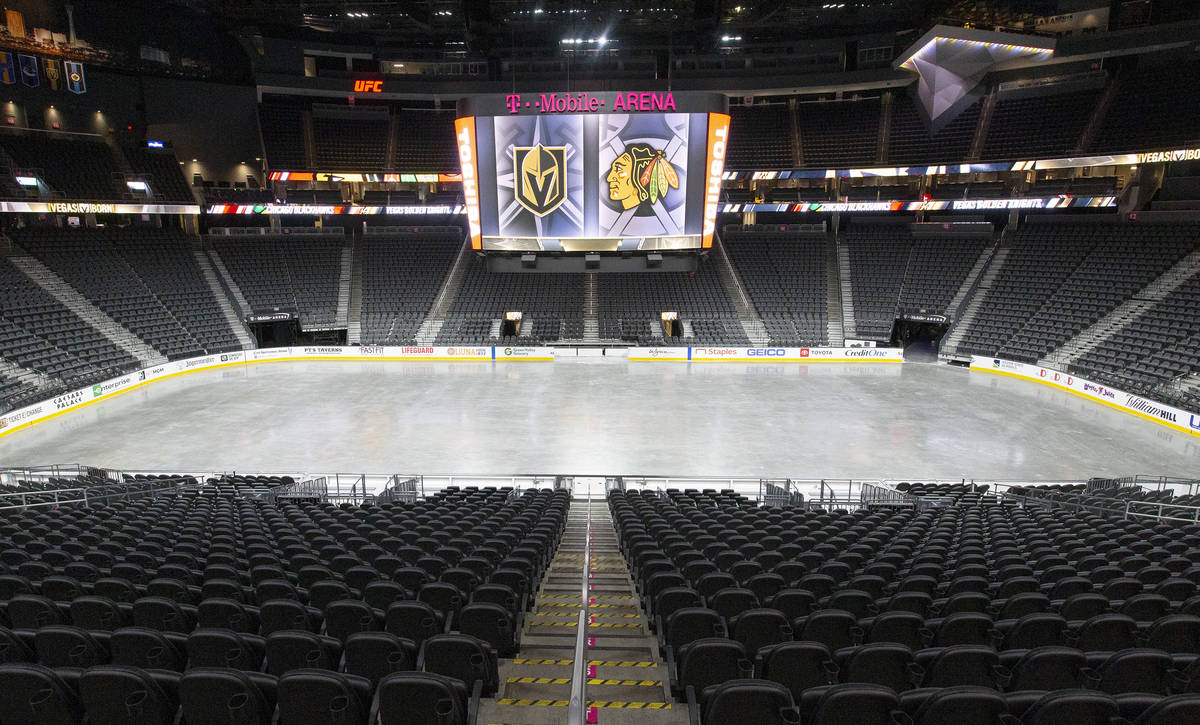 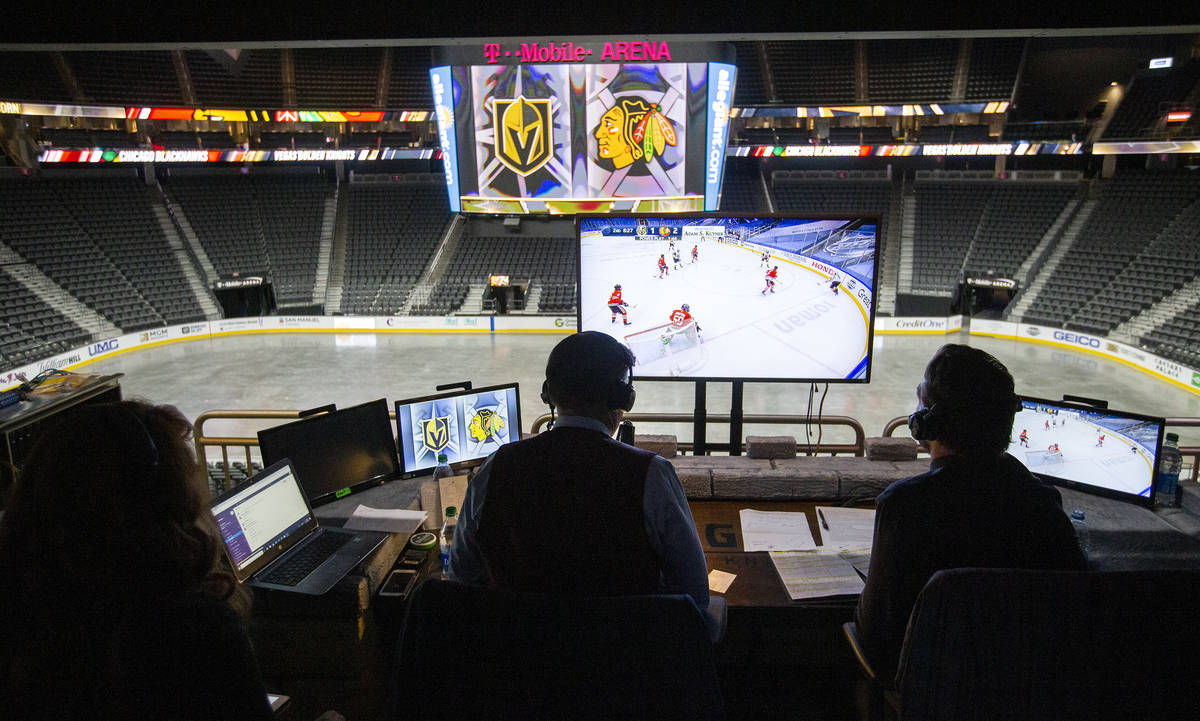 Dave Goucher and Shane Hnidy use the same broadcast booth at T-Mobile Arena now that they do for every Golden Knights home game.

That’s about the only part of their job that hasn’t changed this postseason.

The Knights’ TV announcers for AT&T SportsNet have adapted since the NHL restarted its season, just like many people have during the COVID-19 pandemic. Same goes for Dan D’Uva and Gary Lawless, the voices of the team’s radio broadcasts on Fox Sports Las Vegas (98.9 FM/1340 AM).

And they’ve made it work.

“We’re just trying to make the best out of very odd circumstances and very odd times,” Goucher said. “That being said, it’s been great to be back doing the games. Certainly, I’ve missed it.”

Goucher and Hnidy’s view from the booth has changed drastically.

Instead of looking at a sold-out crowd, they’re staring at empty seats. And instead of watching a live hockey game, they’re watching feeds from Rogers Place and trying to describe the action.

Goucher and Hnidy have three monitors in the booth so they can see what’s happening on the ice.

There’s a 50- to 55-inch screen about 2 feet in front of them that shows the “host feed,” provided by the NHL’s national broadcast partners Rogers (Canada) and NBC (U.S.). It’s essentially the same look viewers get.

“Whatever you would be watching on TV, that’s what we’re watching,” Goucher said.

Another monitor helps Hnidy keep up with replays, and the third previews the graphics that AT&T SportsNet shows on the broadcast.

It’s a setup Hnidy has some history with after calling the World Junior Championships remotely off a global feed for TSN. But Goucher said he hasn’t called a live sporting event like this since he went to college at Boston University.

“I think we’ve gotten fairly comfortable with it,” he said. “As comfortable as you can be in strange times. The eerie part is to go into T-Mobile, the loudest building, the most electric building in the NHL, and it’s just as quiet as a library. Nobody in it. Eighteen thousand empty seats. That’s strange.”

On the radio side, D’Uva and Lawless are working at City National Arena in an old “war room” for the Knights’ hockey staff.

They have three 60-inch monitors. The first, in the middle, is mounted on the wall and shows the center-ice camera feed. D’Uva has a monitor on the left with an “all-12” angle that shows the entire ice sheet and scoreboard. It helps him keep track of the clock, the shot totals, line changes and other things. The third monitor, on the right by Lawless, shows the global broadcast feed with replays.

D’Uva also uses his laptop during warmups to watch an “end zone” camera that lets him see the Knights’ line rushes.

“I think that I have adapted quite quickly to where my eyes need to be at different moments,” D’Uva said. “It’s become almost a reflex to know where your eyes go from monitor one to two to three. It’s not entirely different from how my eyes normally move at an arena.”

This new way of broadcasting games obviously has flaws.

The biggest change for Hnidy has been replays. Normally, he’s constantly talking to his producer and pointing out plays he would like to see again. He has no control over the feed now.

AT&T SportsNet controls just one of 32 cameras at Rogers Place. It uses it to set up certain shots coming out of commercials, but the “host feed” largely dictates what viewers see.

That means Hnidy sometimes doesn’t even know what a replay is showing when it starts. His producer will try to give him a heads-up, but occasionally he has to improvise.

Hnidy also can’t present replays exactly how he would like them anymore. For example, he would have liked a longer one when Knights left wing William Carrier scored against the Chicago Blackhawks in Game 1 of their Western Conference quarterfinal series. The replay began in the offensive zone, but Hnidy wanted to talk about the clean breakout that allowed the Knights to create that chance.

“I don’t always like to show the end result,” Hnidy said. “I want to show the detail of why it got to that point.”

A challenge for Goucher has been trying to create the same energy and excitement he would feel if he were calling a normal playoff game. T-Mobile Arena usually makes that easy. This year, it’s up to him and Hnidy.

“I think we’ve been able to do that with the magnitude of the games,” Goucher said. “I think it probably would’ve been a little bit different if we were doing this in a random game in the middle of November. But the fact that they’re playoff games and there’s so much on the line, it’s pretty easy to generate that excitement.”

Despite the obstacles, all four are just happy to have games to call again. They’re glad they can still produce a solid broadcast, too.

D’Uva said he didn’t know if broadcasting remotely with this level of quality would have been possible five years ago. He compared his setup to the early days of baseball broadcasting when announcers re-created the game via ticker tape.

Now he can watch a game almost 1,500 miles away from multiple angles while describing it to his listeners. He also said advances in radio technology have helped. The past two seasons, his broadcast switched from using ISDN (Integrated Services Digital Network) lines to transport the audio to the station to IP (Internet Protocol) tech.

Essentially, his voice now travels over the internet rather than something similar to a phone line. That’s what gives him and Lawless the freedom to do a full broadcast from City National Arena easily.

Those kind of technical touches have made the action at Rogers Place feel as close as possible for the broadcasters. It’s not a perfect setup, but it certainly beats not calling games at all.

“For the most part, it’s been smooth,” D’Uva said. “We want you to experience the game the same way. To not really dwell on the fact that we happen to not sit in a press box, we’re not on site.”