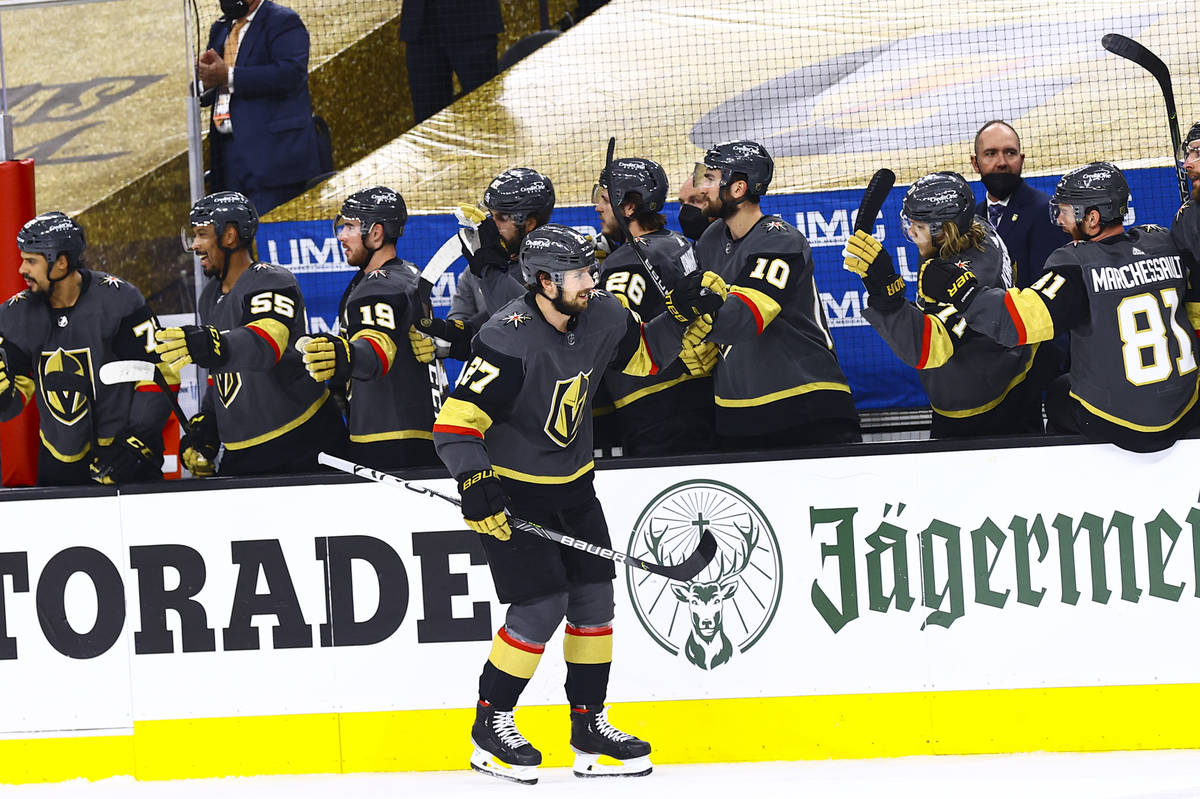 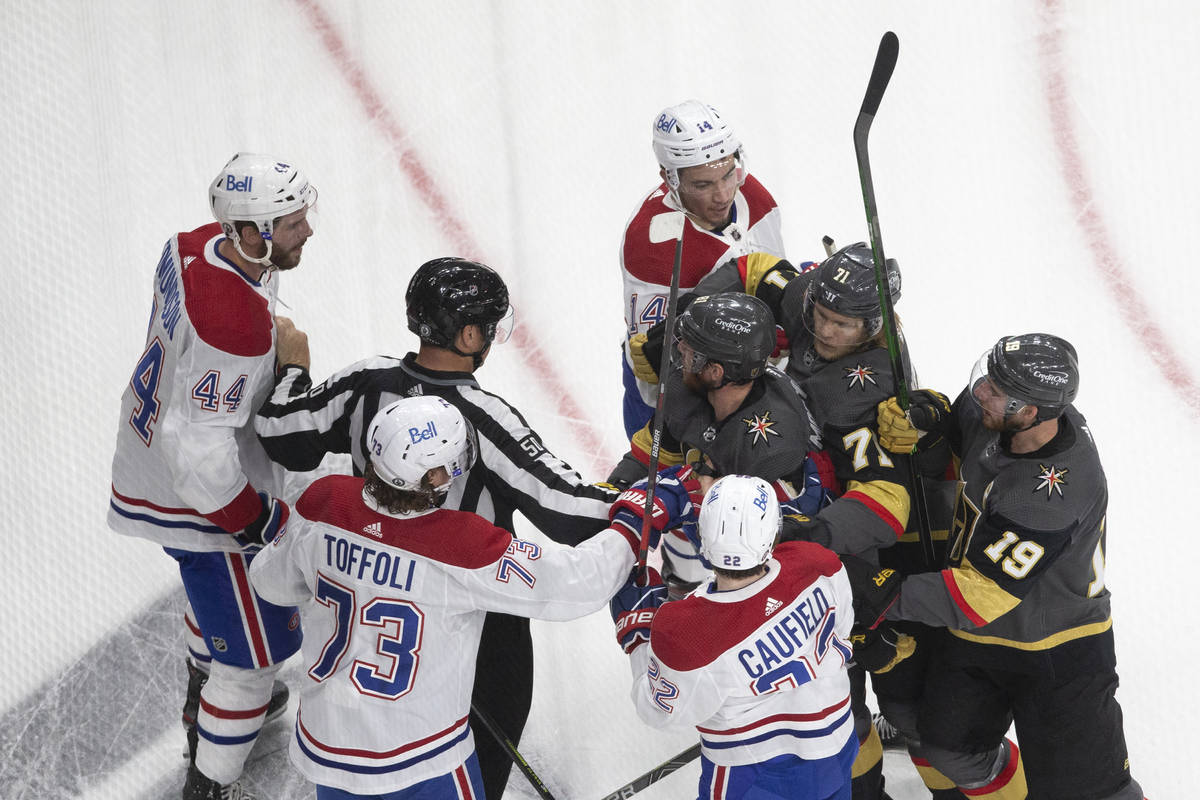 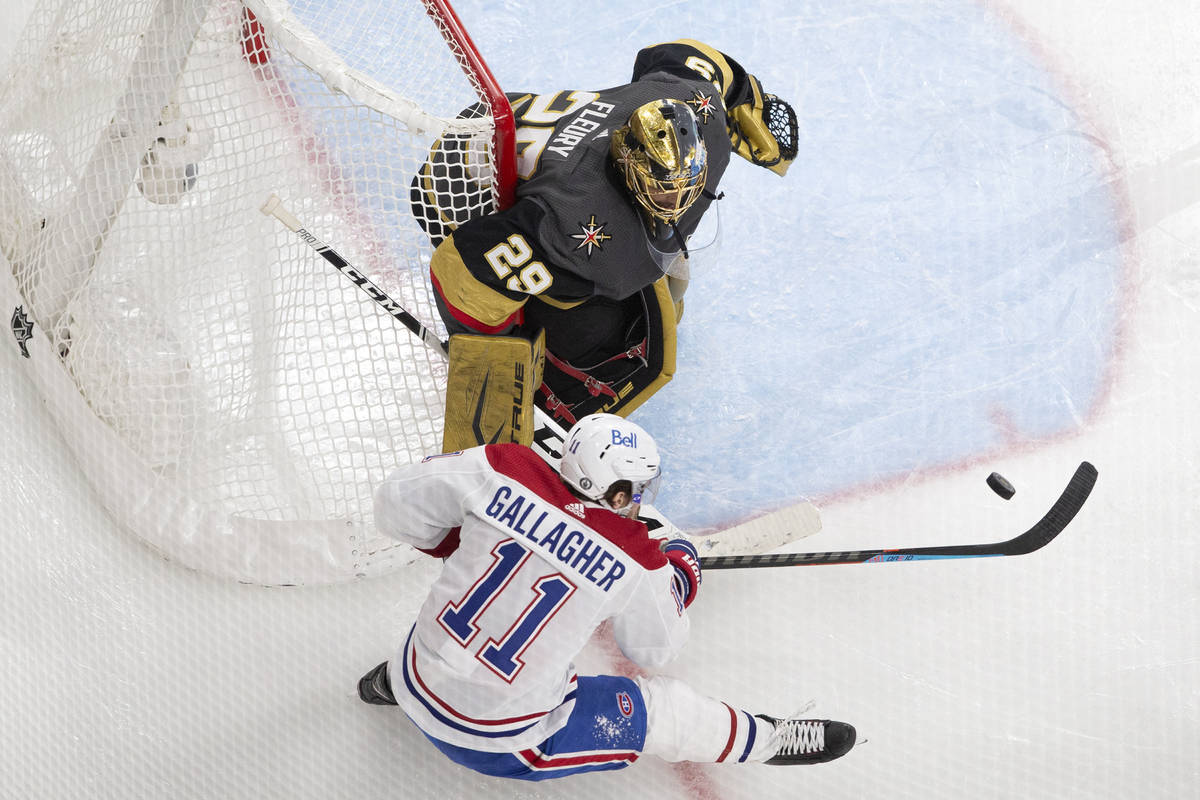 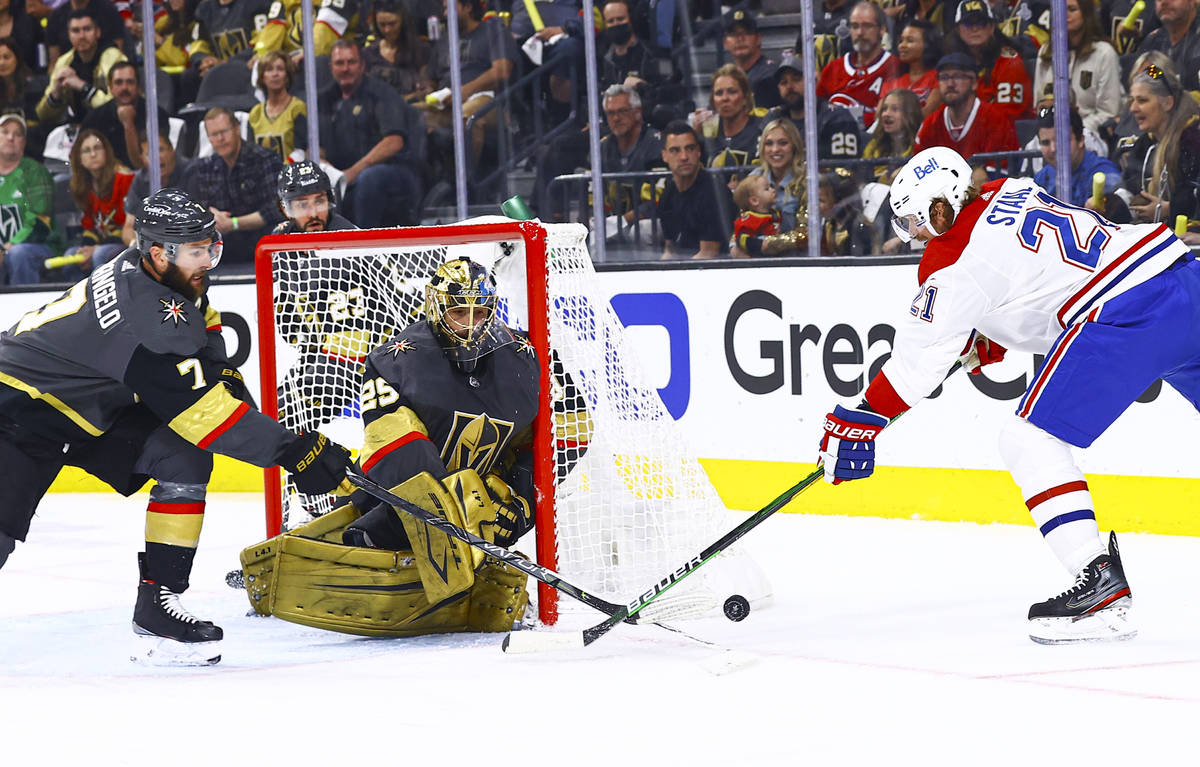 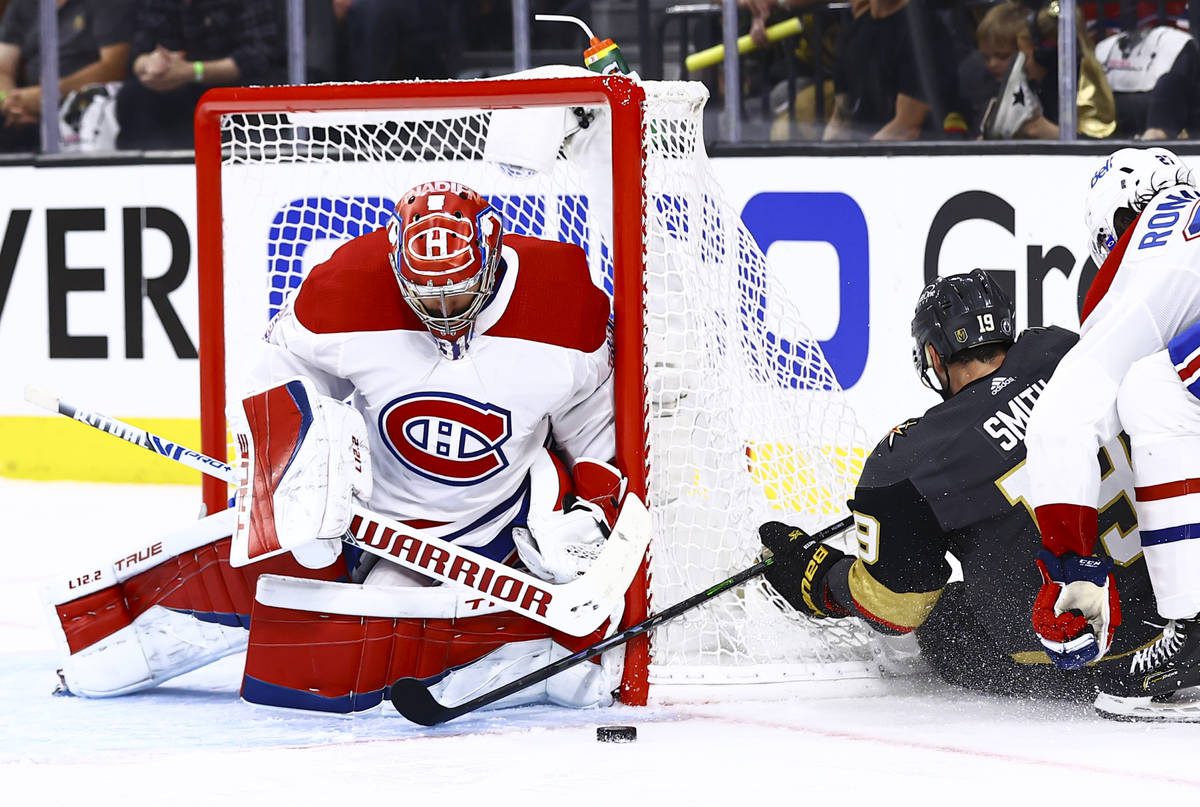 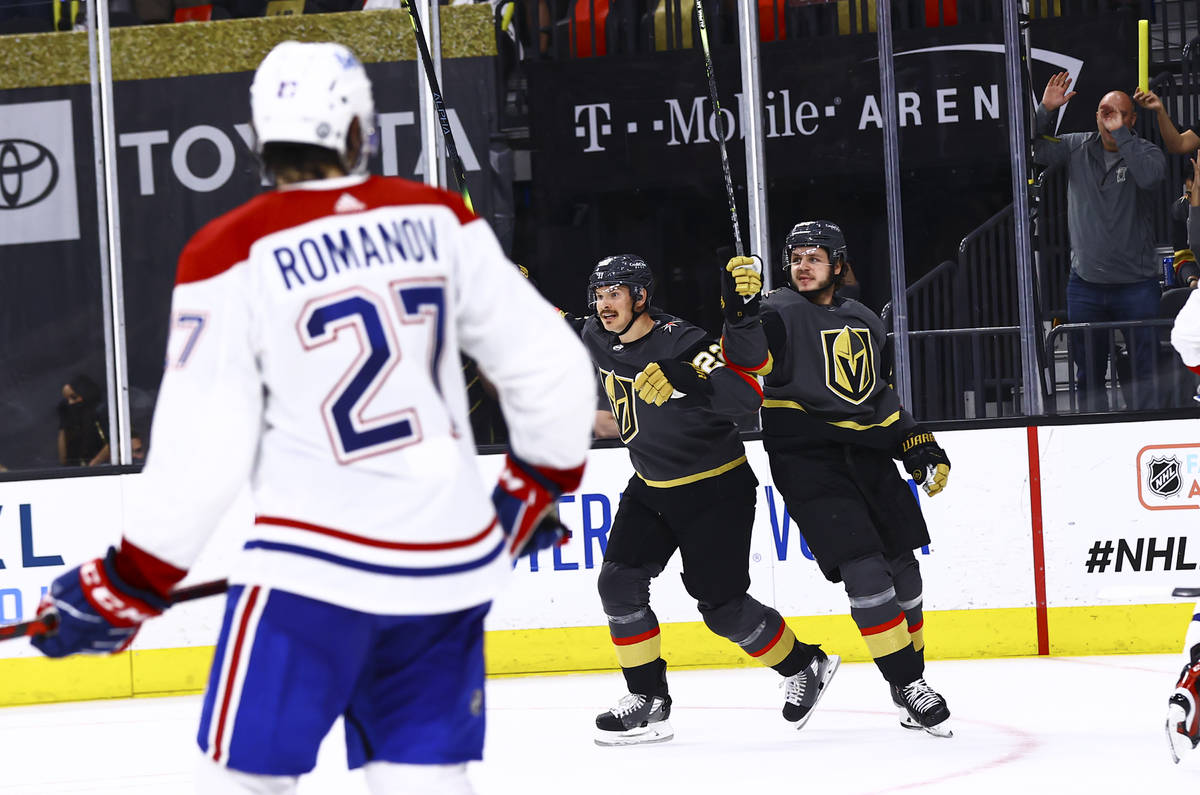 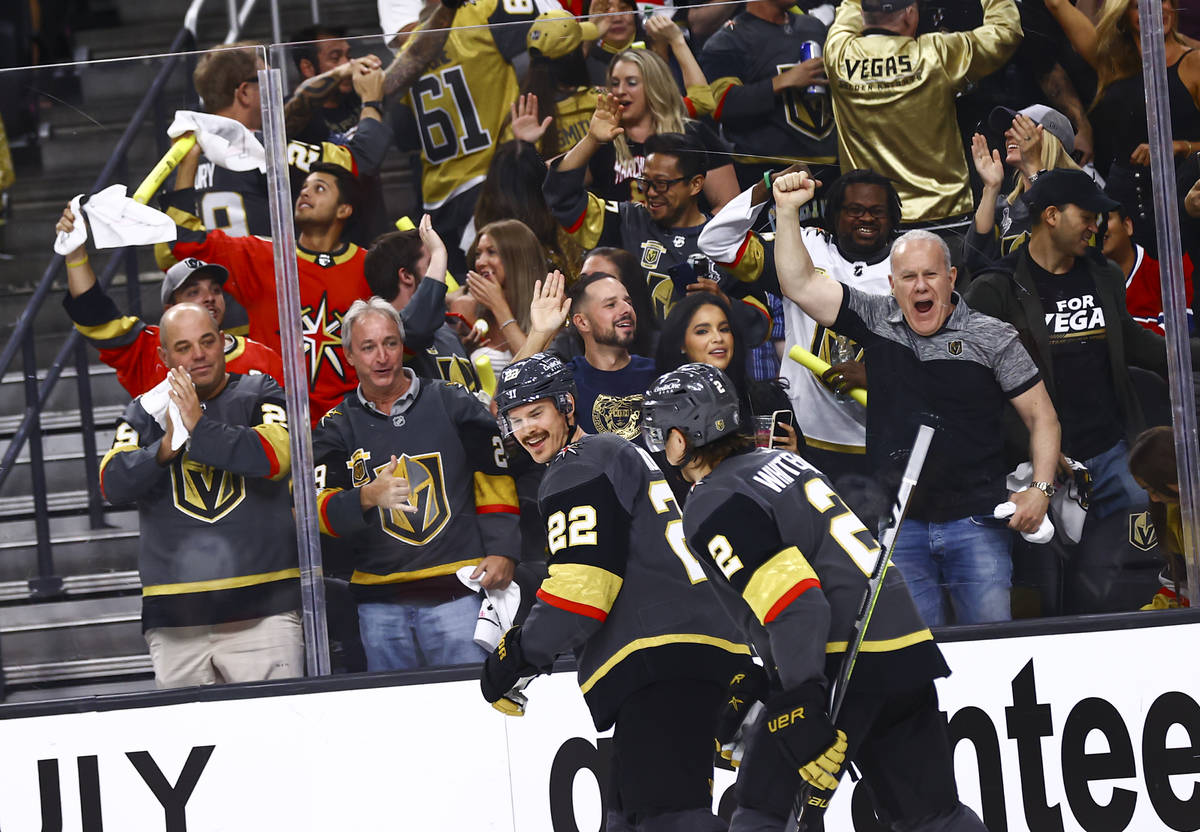 Golden Knights fans celebrate after a goal by Mattias Janmark, not pictured, during the second period of Game 1 of an NHL hockey Stanley Cup semifinal playoff series against the Montreal Canadiens at T-Mobile Arena in Las Vegas on Monday, June 14, 2021. (Chase Stevens/Las Vegas Review-Journal) @csstevensphoto

3. Right wing Reilly Smith — He recorded his second two-point night of the playoffs with two assists. He made a great pass to set up defenseman Nick Holden for the Knights’ fourth goal.

2. Goaltender Marc-Andre Fleury — He was busy early and late. He made 12 saves in the first period to keep Montreal off the board and stopped 12 shots in the third.

1. Defenseman Shea Theodore — He scored his first goal of the postseason in the first period and set up the Knights’ second goal in the second. It was his fourth two-point game of the playoffs.

The Knights didn’t start well, and the Canadiens had a ton of early chances. But a faceoff win by center Chandler Stephenson after a Montreal icing set up Theodore for a slap shot that got by goaltender Carey Price.

The goal ended the Canadiens’ streak of 447:08 without trailing, the second-longest in NHL playoff history. It also allowed the Knights to take a “deep breath” and find their game, coach Pete DeBoer said.

Five of the team’s blue liners had at least a point, and three scored a goal. The Knights became the first team in the playoffs to have three defensemen score in a game.

The one defenseman who didn’t get a point, Alex Pietrangelo, had a team-high seven shots on goal in 25:26. No one else on the Knights had more than three.

“After we got through the first period, I liked everything about our game.” — DeBoer

“I thought we came out firing in the first period and then we kind of just sat back and let them come at us. But we were excited to play in front of a sold-out barn again. We’ll be better next game for sure.” — Montreal defenseman Joel Edmundson

Marc-Andre Fleury tells Chicago he will play next year, per reports
By Ben Gotz / RJ

Marc-Andre Fleury was traded from the Golden Knights to the Chicago Blackhawks on Tuesday and has been mulling his future since then.