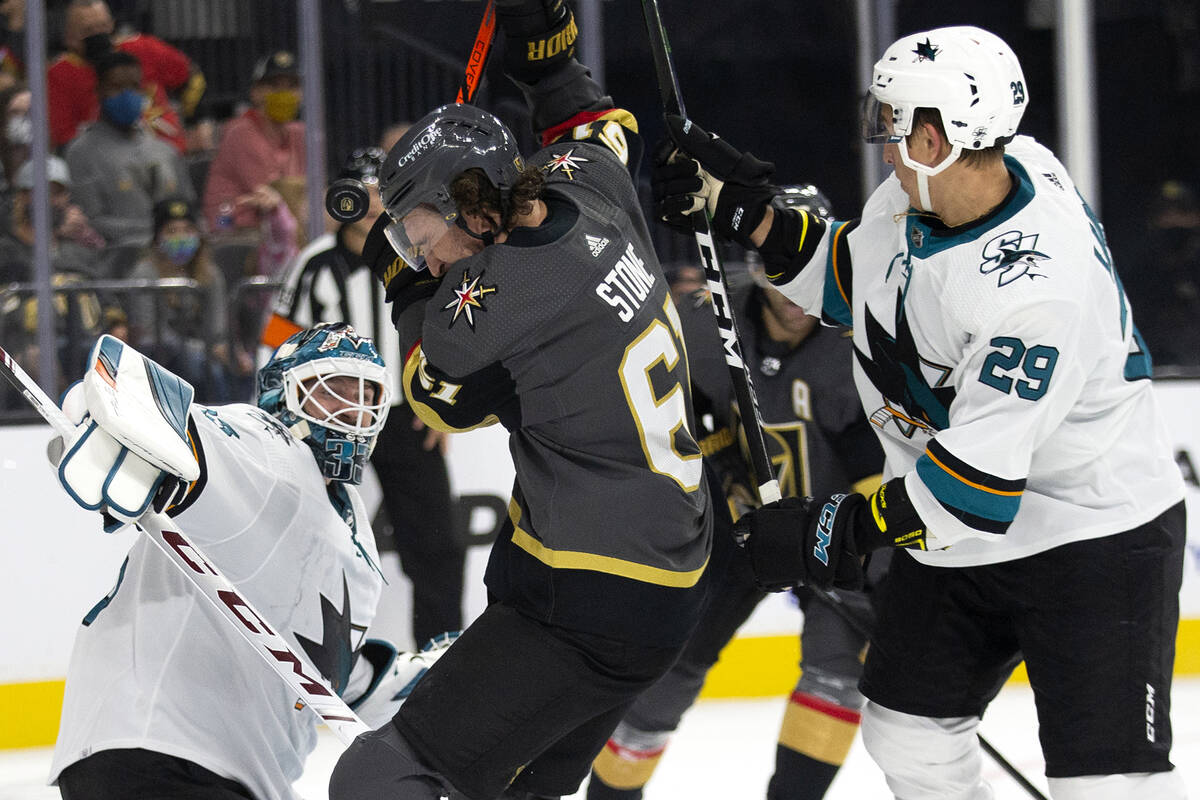 The puck is in the air after hitting the ear of Golden Knights right wing Mark Stone (61) as Sharks goaltender Adin Hill (33) reaches to save the shot during the first period of a preseason NHL hockey game on Sunday, Sept. 26, 2021, at T-Mobile Arena, in Las Vegas. (Ellen Schmidt/Las Vegas Review-Journal) @ellenschmidttt 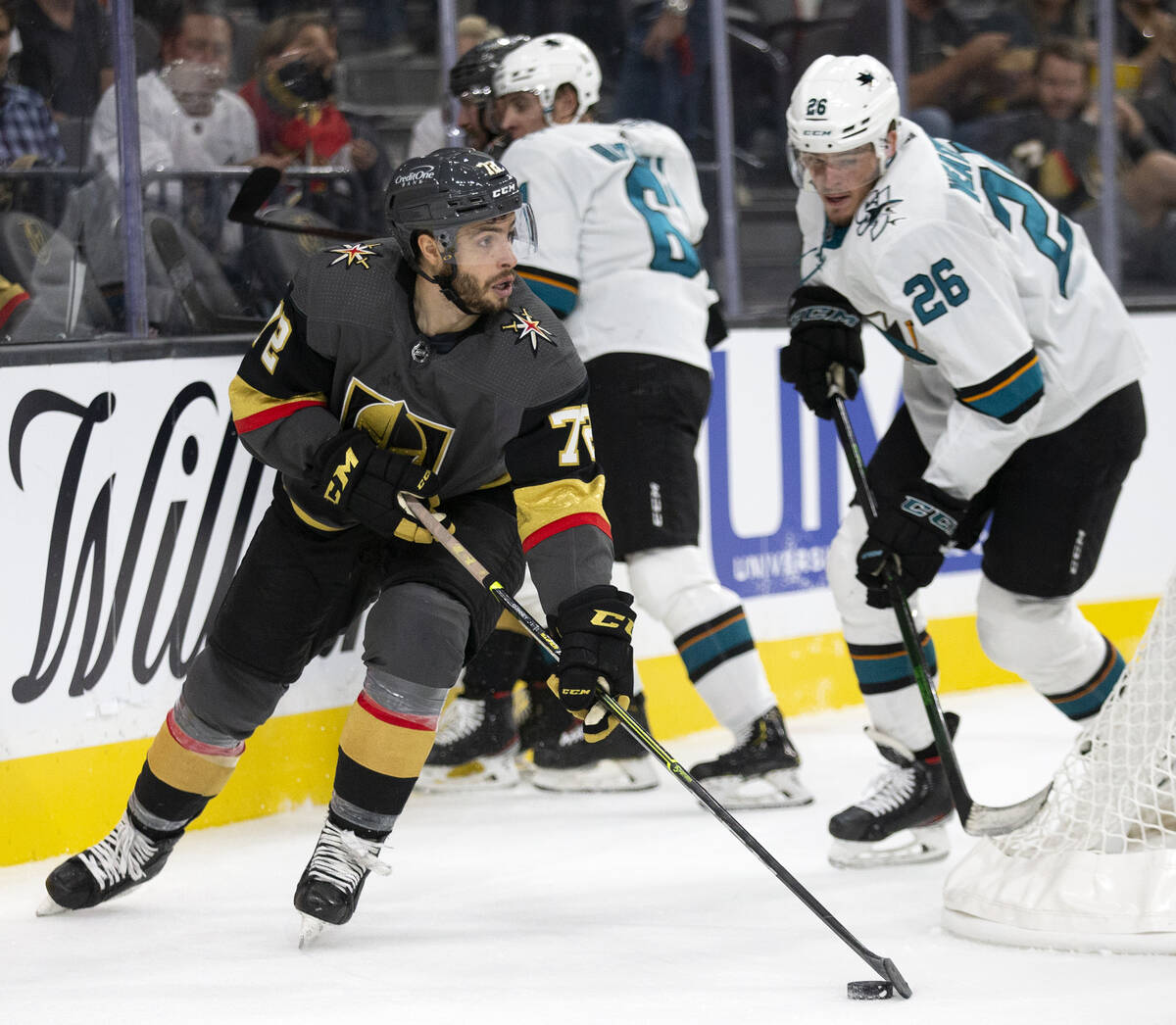 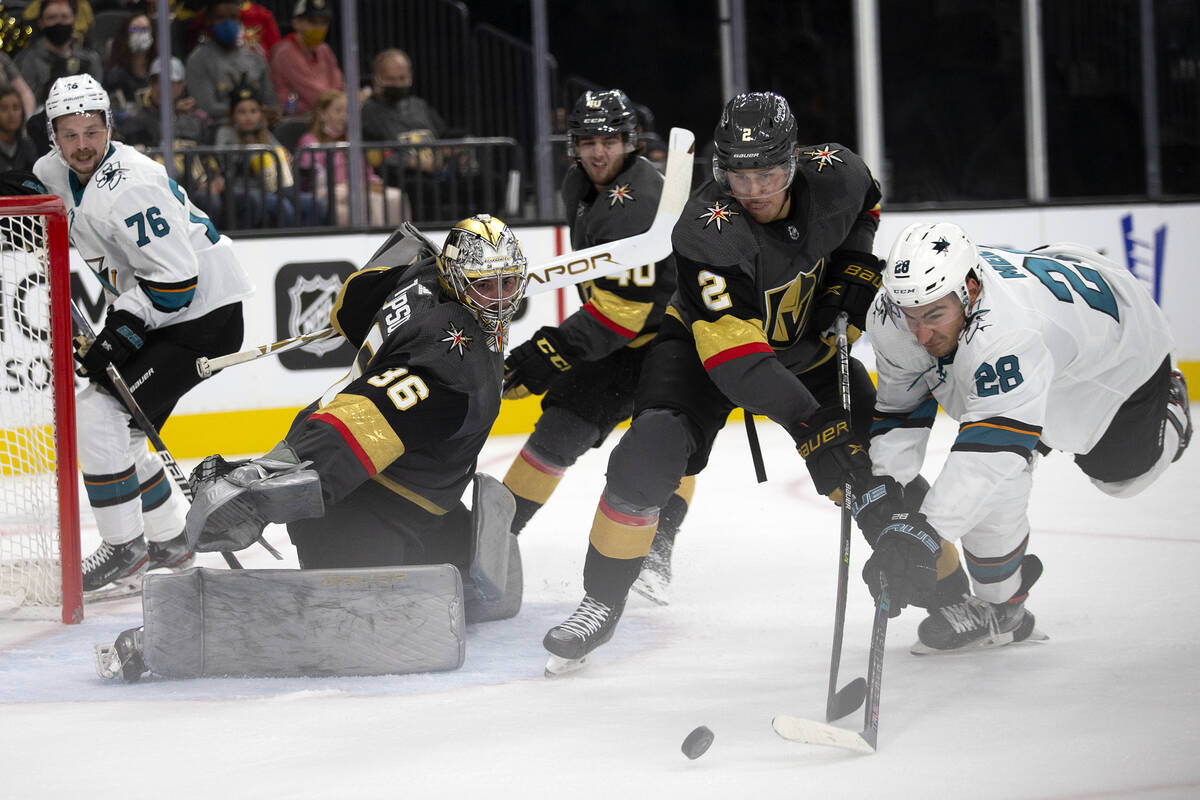 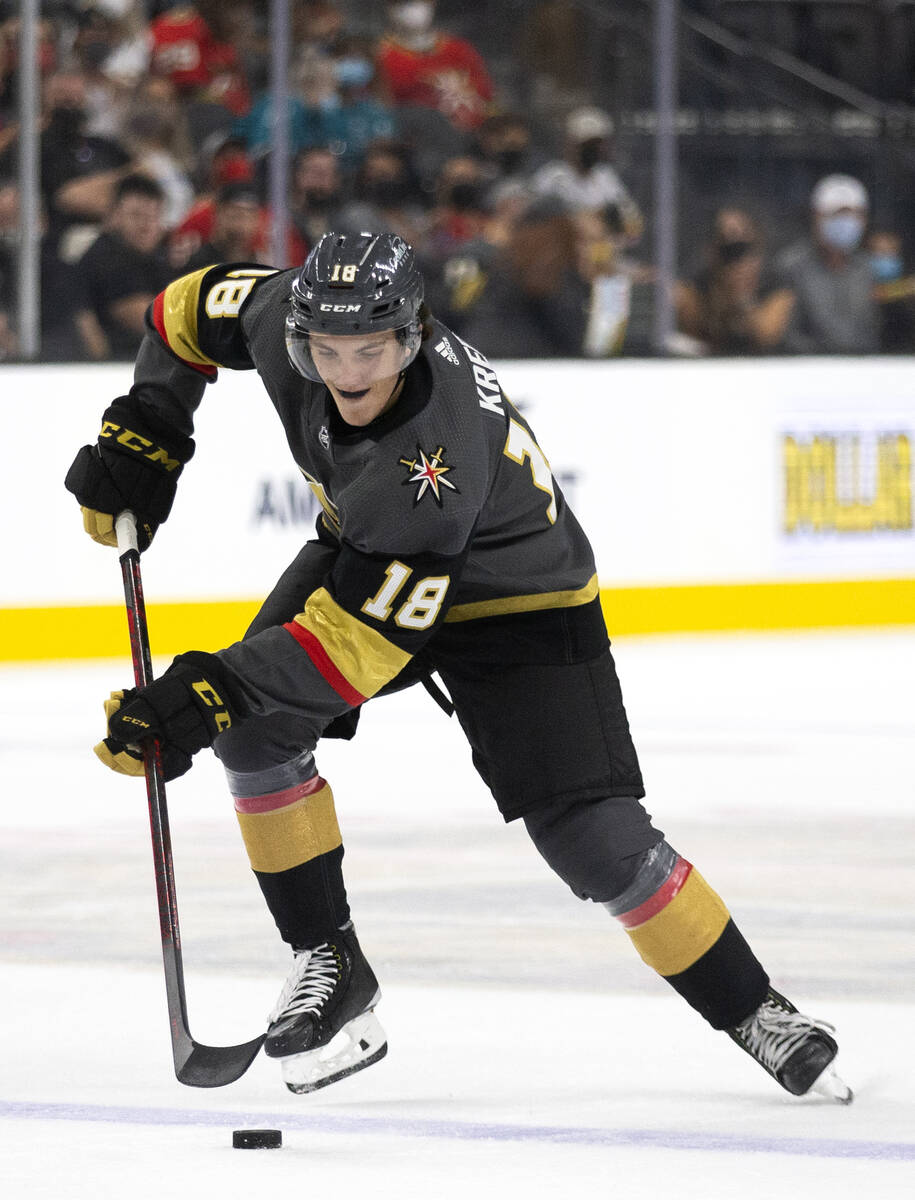 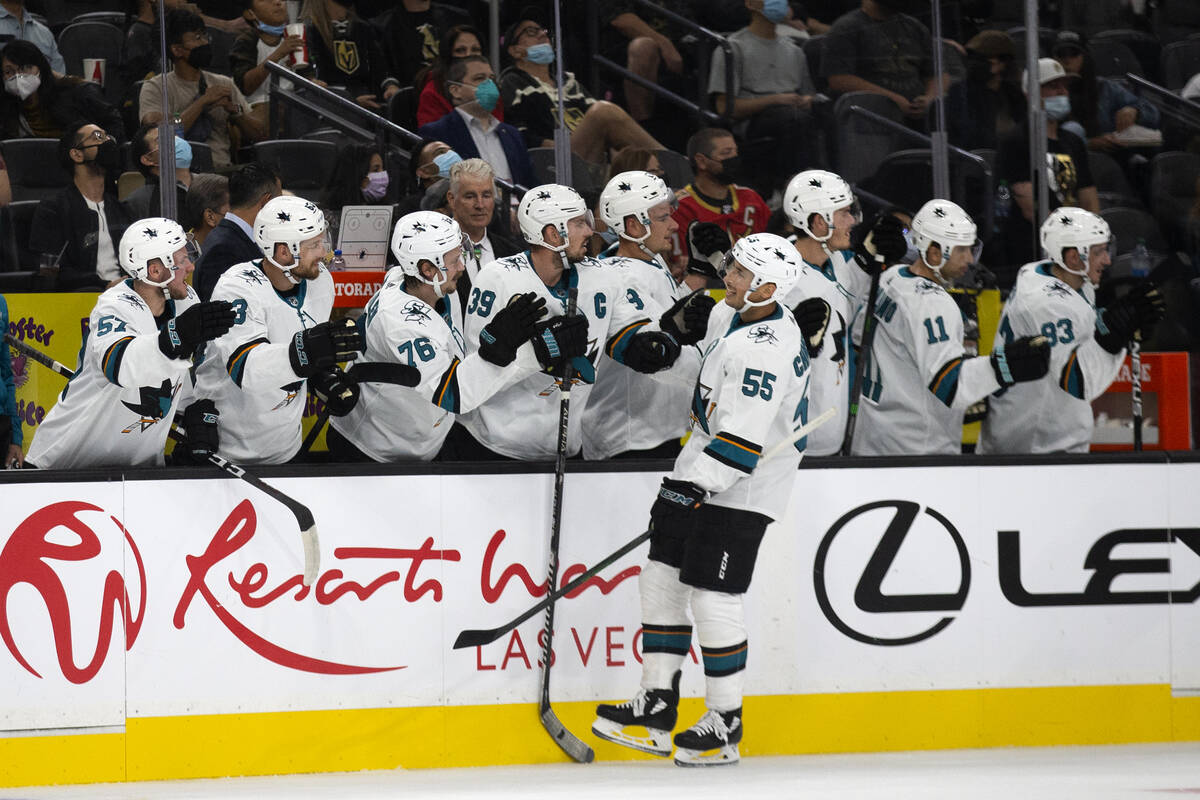 Sharks center Alexander Chmelevski (55) is congratulated by his team after scoring a goal on the Golden Knights during the first period of a preseason NHL hockey game on Sunday, Sept. 26, 2021, at T-Mobile Arena, in Las Vegas. (Ellen Schmidt/Las Vegas Review-Journal) @ellenschmidttt 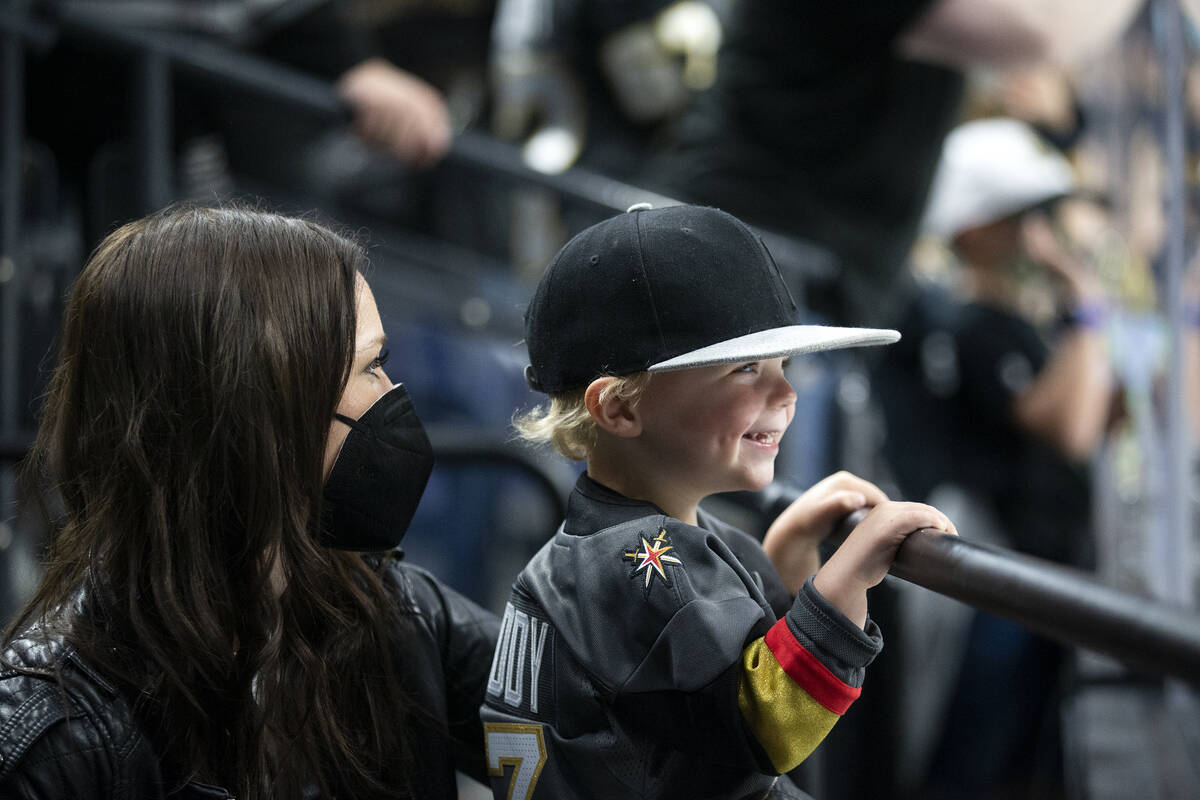 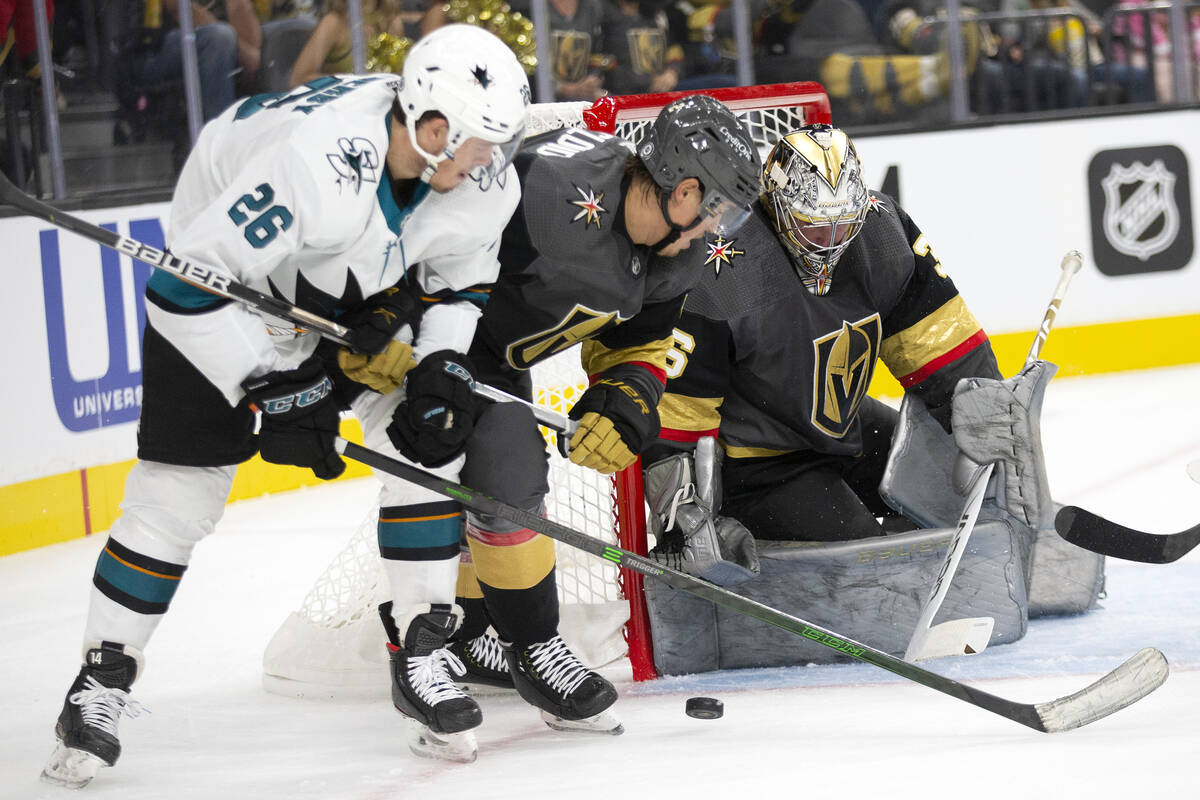 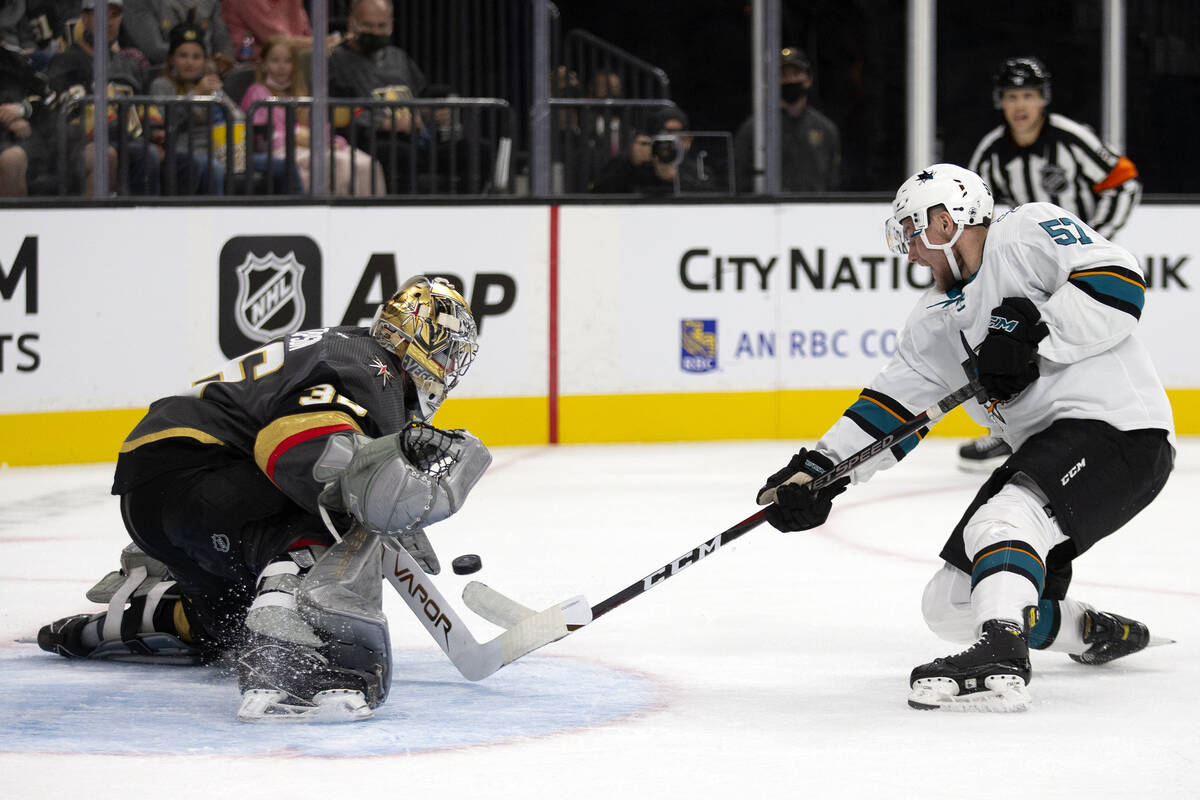 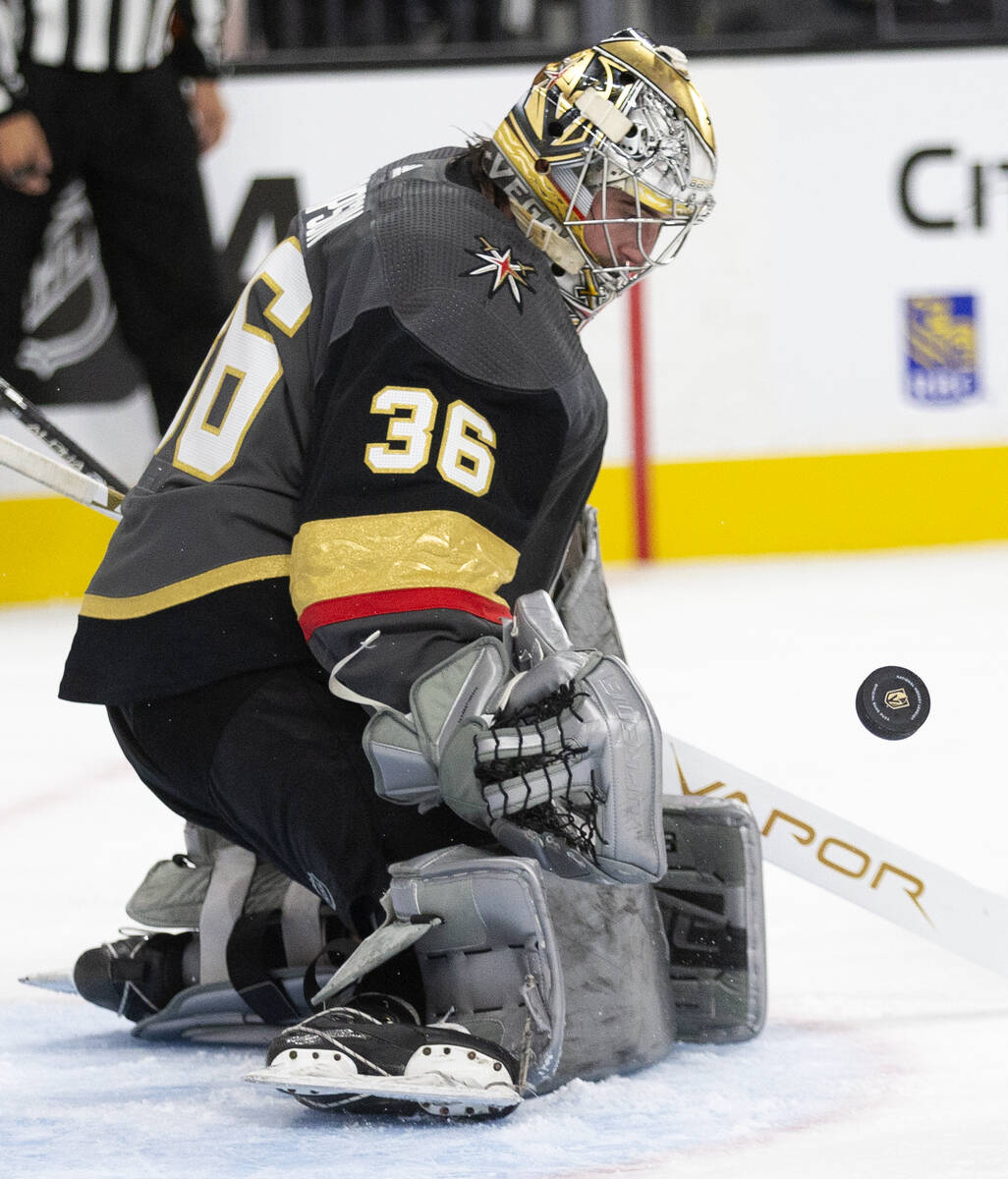 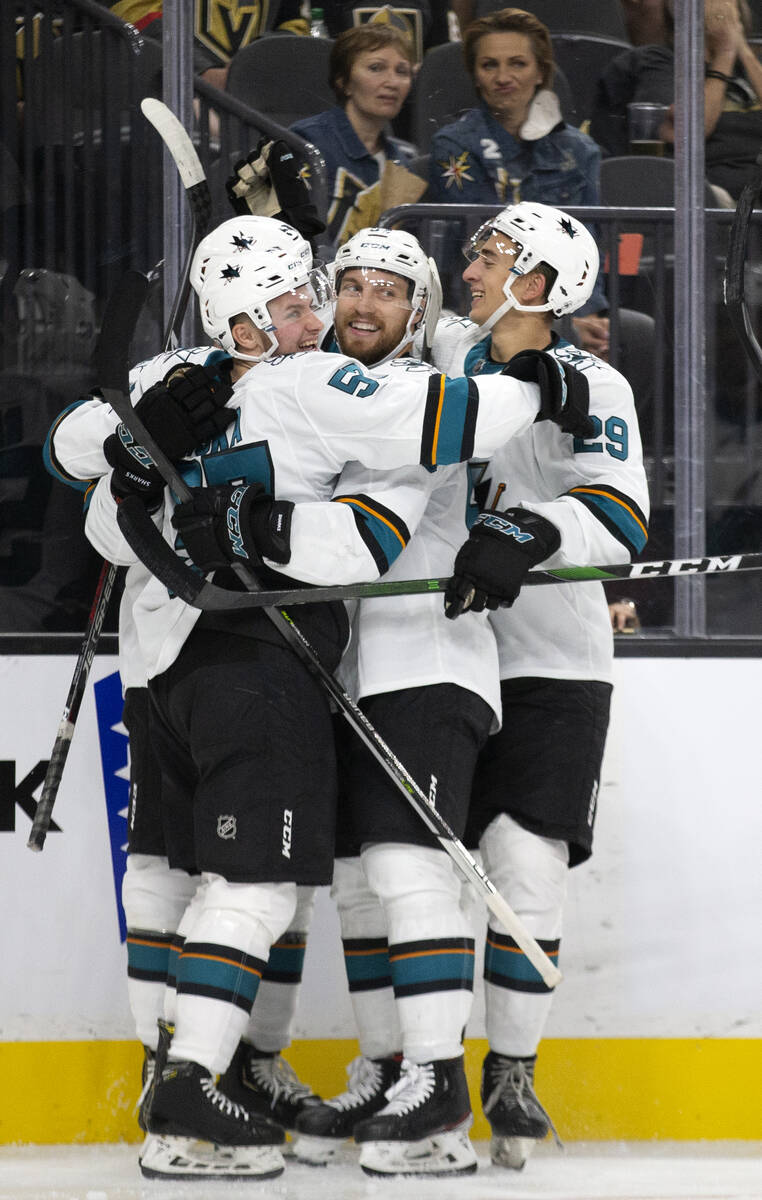 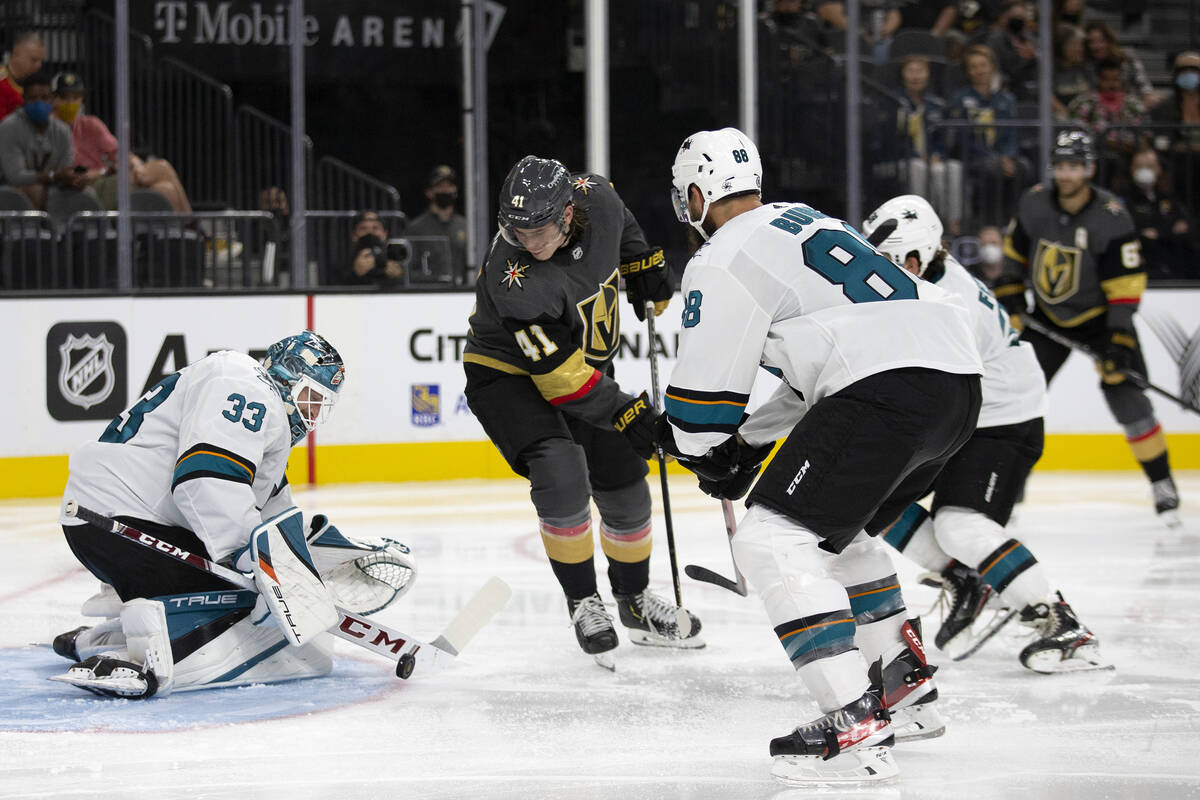 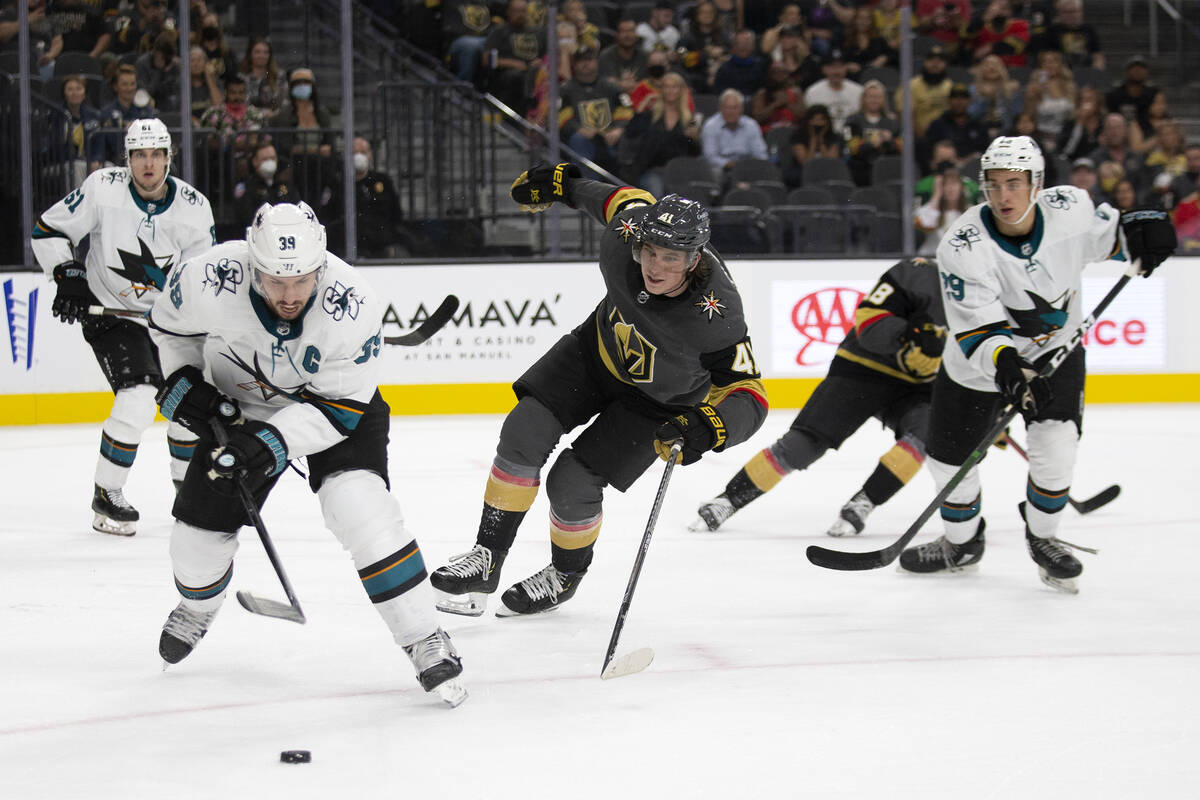 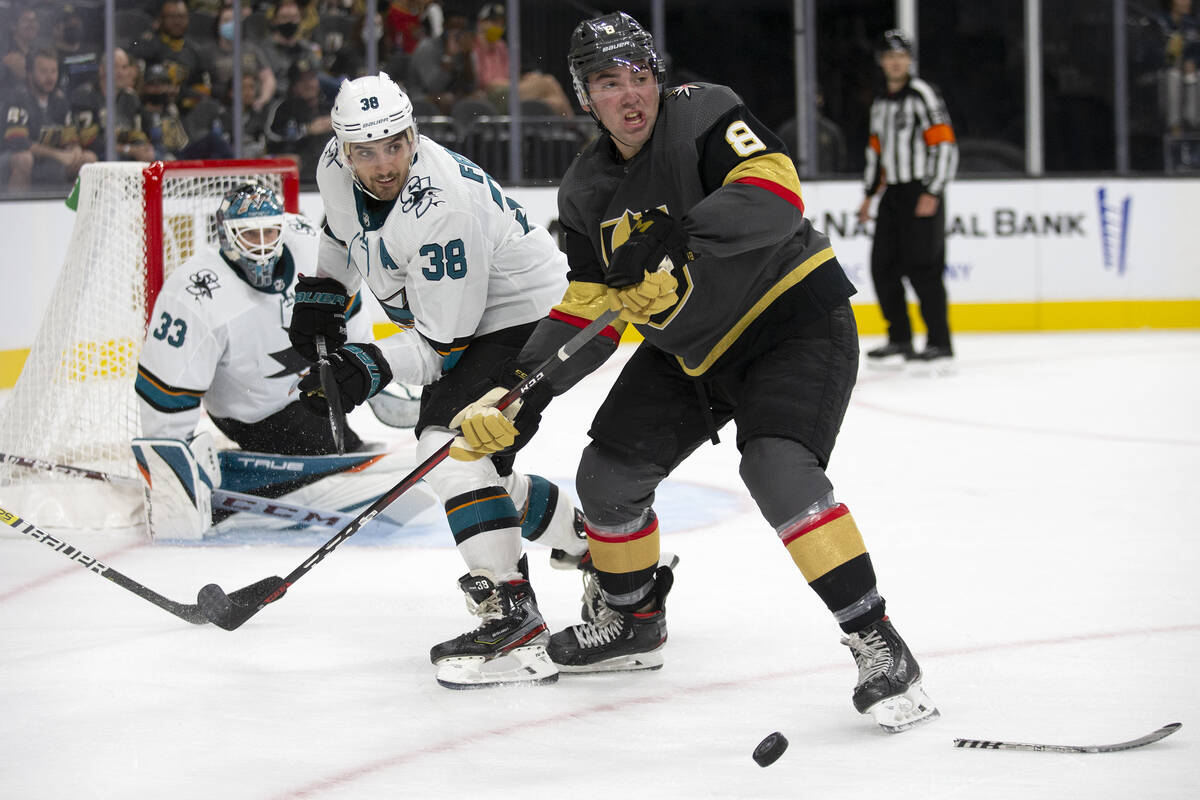 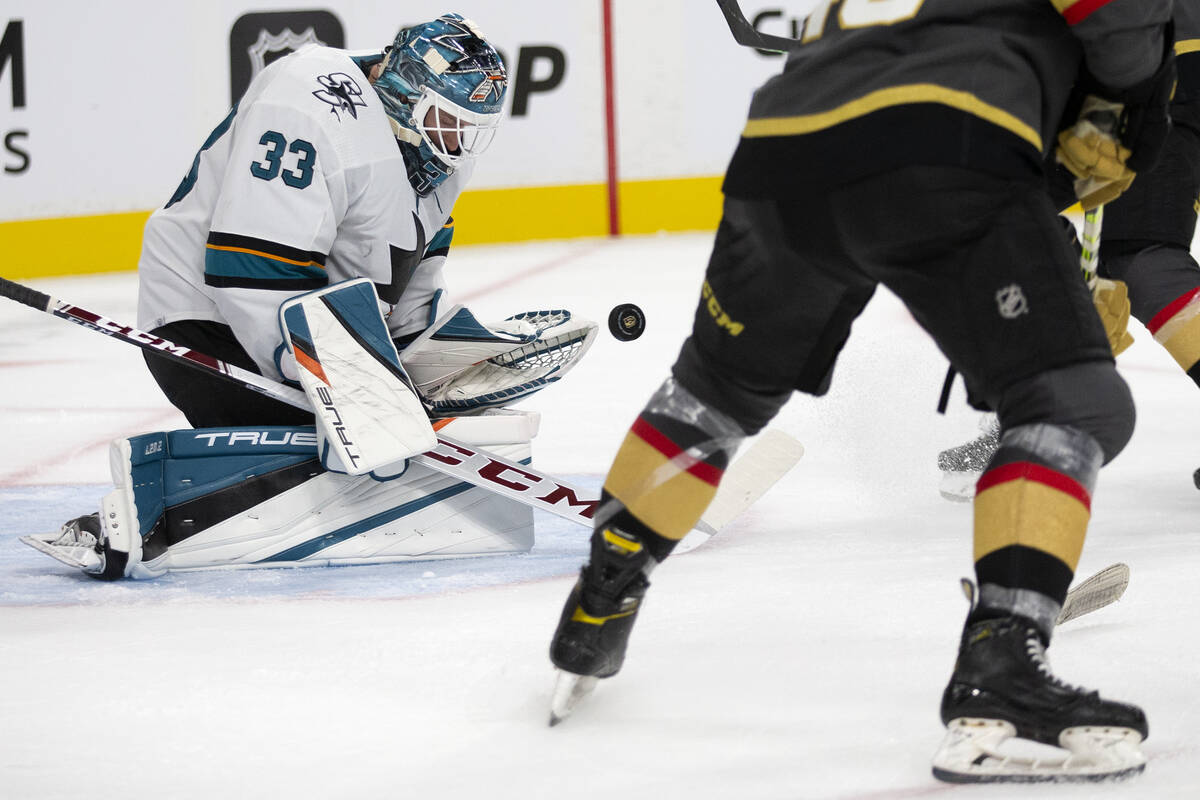 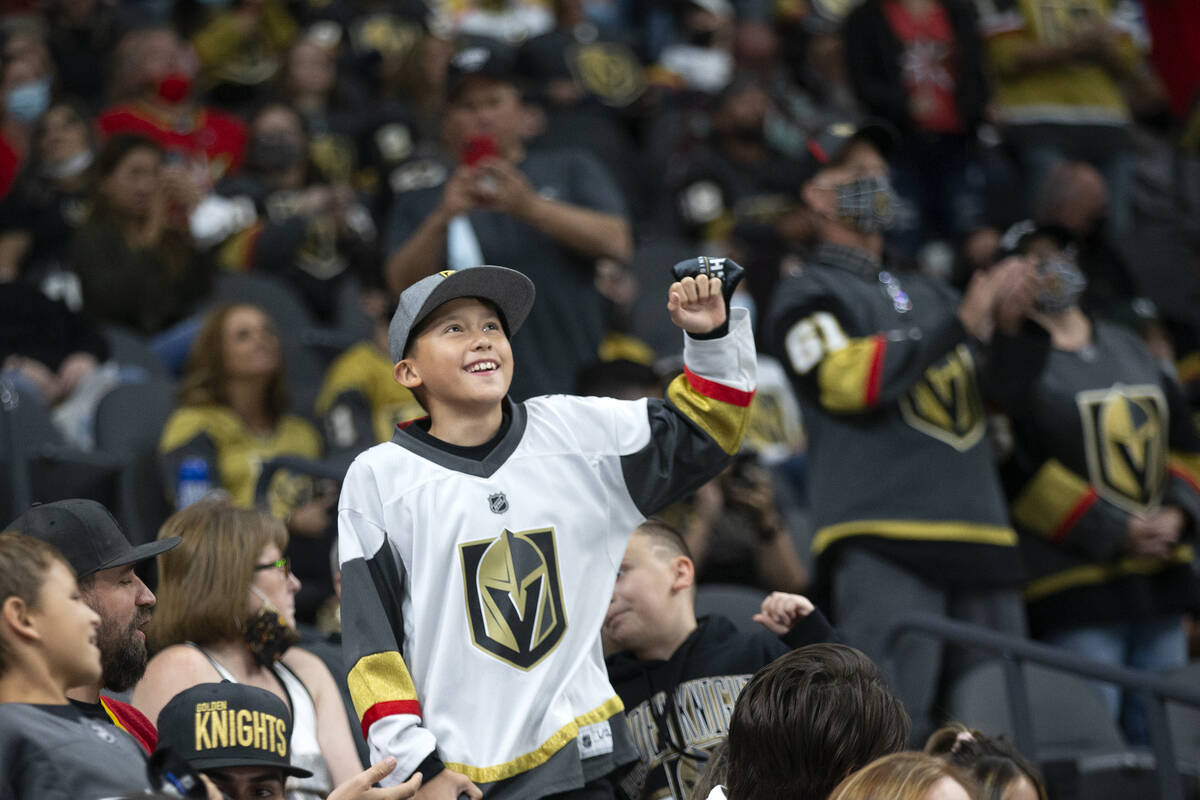 A fan dances to the big screen during a preseason NHL hockey game between the Golden Knights and the Sharks on Sunday, Sept. 26, 2021, at T-Mobile Arena, in Las Vegas. (Ellen Schmidt/Las Vegas Review-Journal) @ellenschmidttt 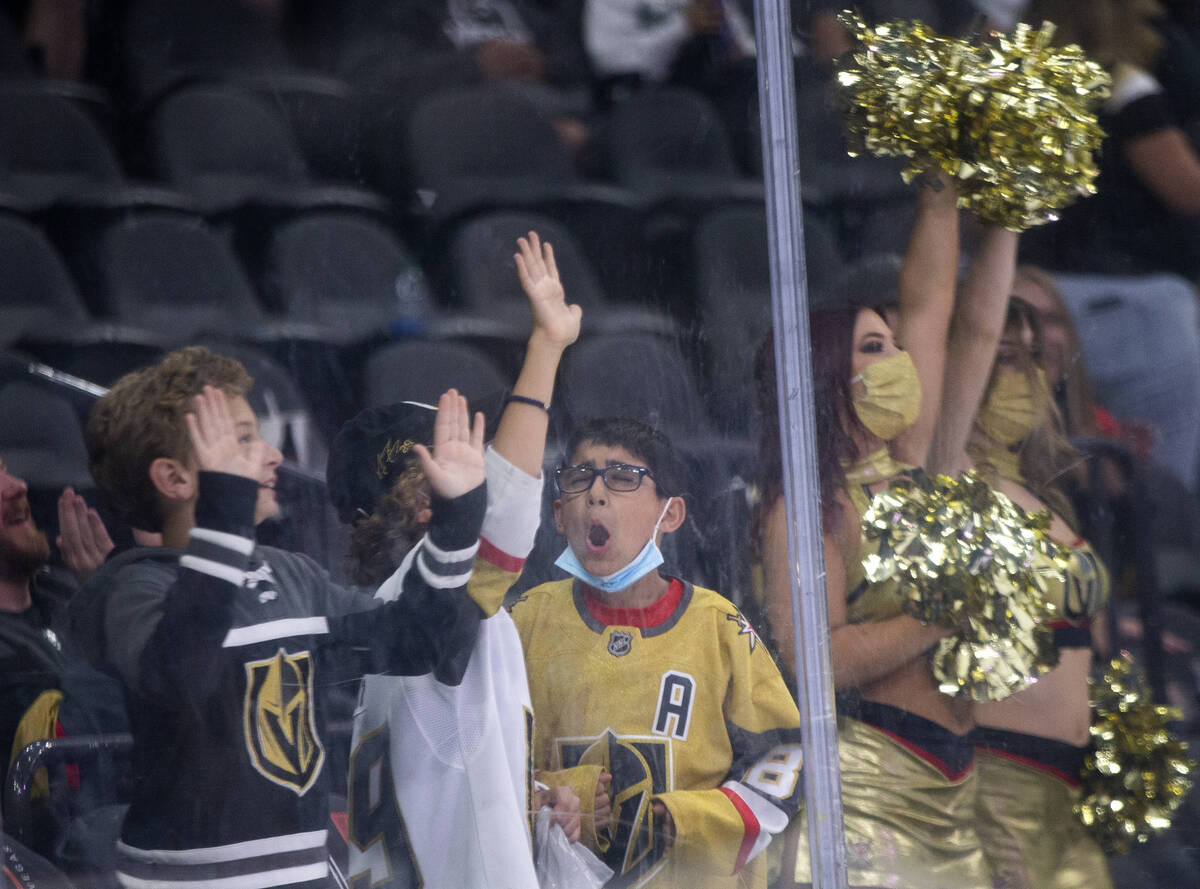 Fans cheer during a shootout following a preseason NHL hockey game between the Golden Knights and the Sharks on Sunday, Sept. 26, 2021, at T-Mobile Arena, in Las Vegas. (Ellen Schmidt/Las Vegas Review-Journal) @ellenschmidttt 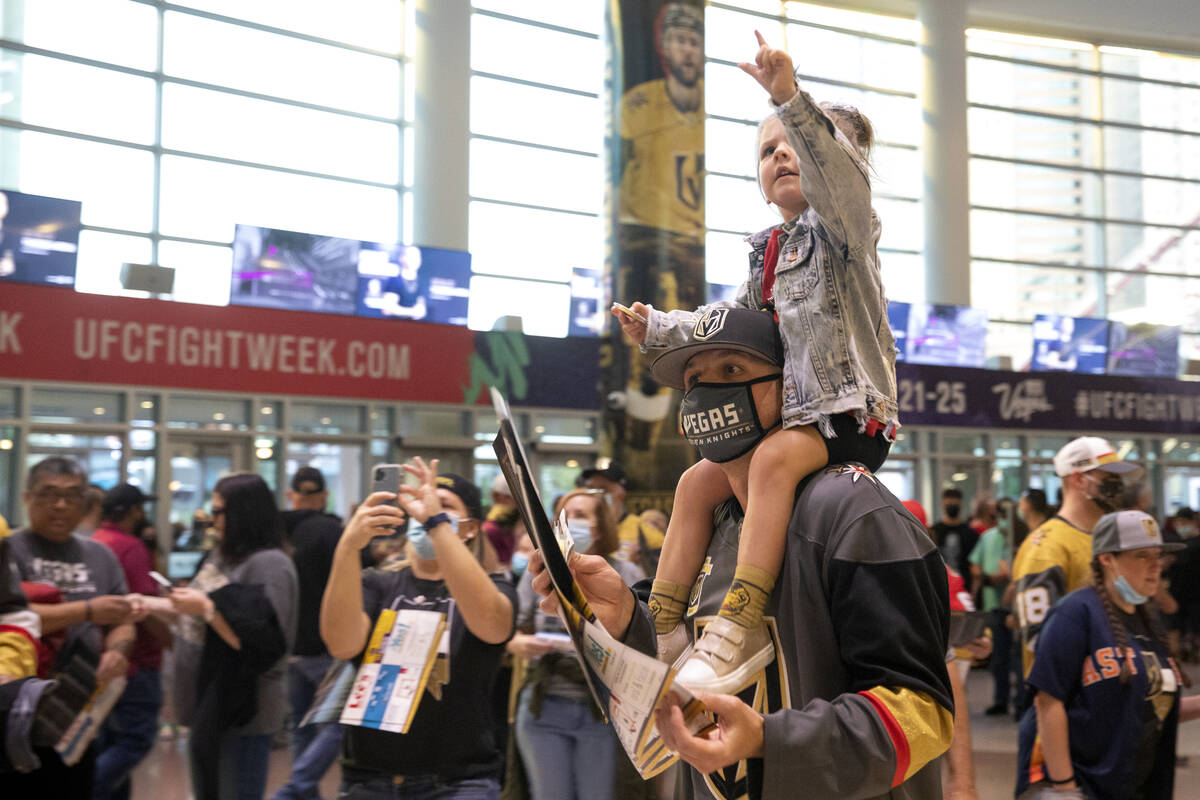 Lennon Wells, 3, sees the pre-game fan parade coming ahead as her father Jake Wells holds her before a preseason NHL hockey game between the Golden Knights and the Sharks on Sunday, Sept. 26, 2021, at T-Mobile Arena, in Las Vegas. (Ellen Schmidt/Las Vegas Review-Journal) @ellenschmidttt

If the Golden Knights were hoping for a routine preseason opener, that went out the window early on Sunday.

Captain Mark Stone was struck in the side of the head by a puck with 8:20 remaining in the first period and did not return in a 4-2 loss to San Jose at T-Mobile Arena.

Defenseman Shea Theodore also missed all of the third period, while defenseman Brayden McNabb did not play the final 12 minutes.

Stone had stitches and was held out largely as a precaution, Knights coach Peter DeBoer said. He was awaiting updates on Theodore and McNabb after the game.

“I don’t think it’s anything serious,” DeBoer said of Stone. “But you never know. Overnight sometimes, these things can get worse so we’ll see.”

Stone was battling in front of the net with Sharks defenseman Gannon Laroque when a shot from McNabb appeared to catch him in the right ear.

Stone immediately motioned for the trainer and stayed down on the ice while being attended to as the announced crowd of 17,077 watched in hushed silence. He then headed straight to the locker room.

Paul Cotter scored for the Knights in the second period to cut the deficit to 2-1, and Max Pacioretty added a power-play goal in the third period.

Jasper Weatherby and Adam Raska took advantage of turnovers by the Knights to score in the second period, and Logan Couture added a third-period goal. Alexander Chmelevski had a power-play goal in the first period for San Jose.

Cotter isn’t one of the first names mentioned in the competition for bottom-six forward spots, but he helped himself against the Sharks.

The fourth-round pick in 2018 had the team’s best chances in the first period and cashed in a nice pass from Jack Dugan during an odd-man rush. He finished with three shots on goal, two takeaways and also dished out a team-high six hits.

Cotter produced five goals and 16 points in 38 games for the Silver Knights last season and could be in line for a bigger role if he continues to perform like he did Sunday.

“I thought I did well,” Cotter said. “I thought I played fast, and for a preseason game I think we all played pretty good.”

The power play is a major storyline for the Knights this season after their struggles with the man advantage led to their ouster from the playoffs.

The revamped unit looked improved, finishing 1-for-3 while moving the puck much more crisply in the zone.

“I would ask that we look at this over the course of a year,” DeBoer said. “I like some of the pieces and the way it looked, but we’ve got a long way to go and a lot to prove. We’ll see where it is at the end of the year.”

Pacioretty converted in the third period after a scramble in front, and newly acquired Evgenii Dadonov was a threat in the middle of the ice from the bumper position, hitting the post in the second period.

Nolan Patrick also was effective playing the net-front spot. He picked up an assist on Pacioretty’s goal.

“We had some good looks and got one there,” Patrick said. “I’ve played net-front quite a bit in my career so I’m pretty comfortable there. I thought we moved it around pretty well tonight.”

Defenseman Lukas Cormier was the youngest player in the Knights’ lineup, and the 2020 third-round pick struggled against the Sharks’ forecheck in his debut.

He finished with a minus-2 rating and had four giveaways, including one leading directly to Raska’s goal that put San Jose on top 3-1.

Peyton Krebs’ puck management also left something to be desired, as he committed four of the team’s 15 giveaways. The top prospect coughed up the puck trying to make a breakout pass through the middle and Weatherby capitalized for the Sharks’ second goal.

“I think our hearts were in the right place,” DeBoer said. “I think some guys were trying hard but we made some mistakes with the puck and some things that you obviously clean up as it goes on. Some guys trying to do too much.”