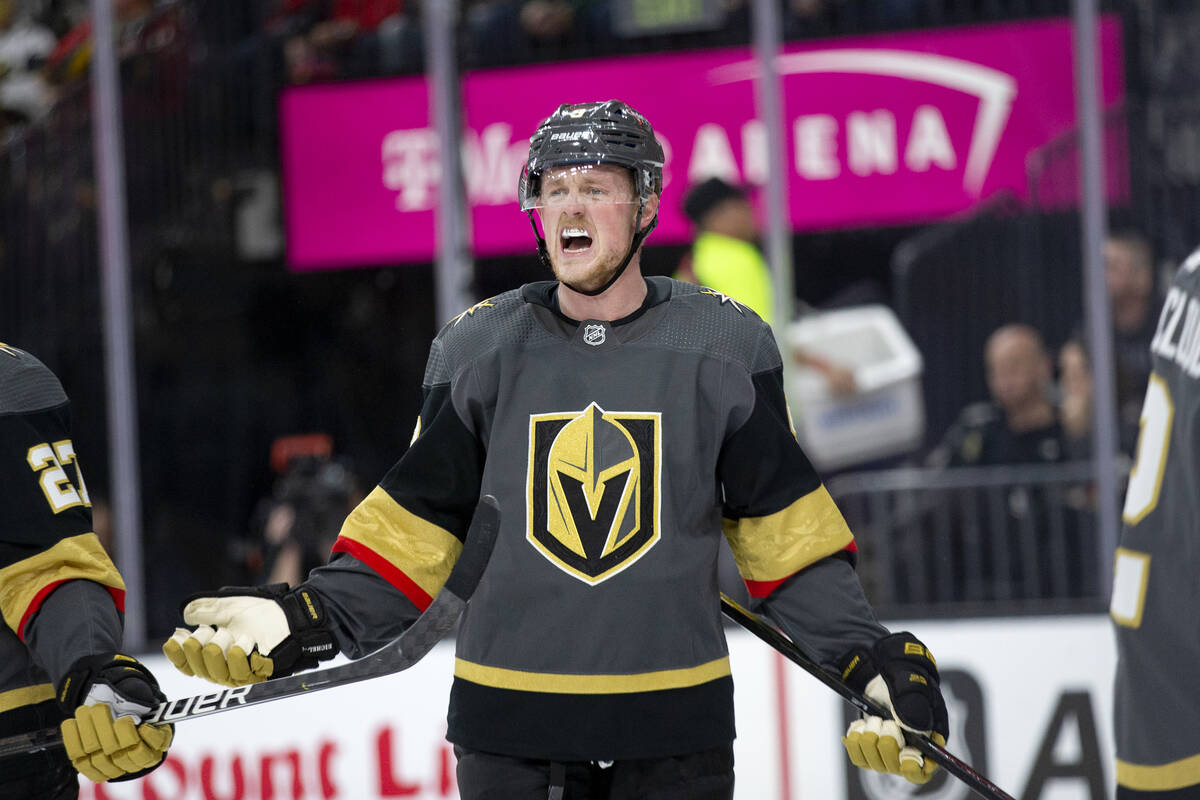 Jack Eichel never had surgery before Nov. 12. Not on his knee or his hand or anywhere else during his hockey career.

When he woke up that morning and arrived at Rocky Mountain Spine Clinic in Denver, Eichel was understandably nervous.

“I think when you’re in that situation, you’re like, ‘Hey, this is pretty real now,’” Eichel said. “But credit to everyone. I mean, it was seamless. I was in and out. You’d be surprised by how smooth everything went and how well I felt after the surgery.”

Eichel was the first NHL player to undergo artificial disk replacement surgery and made a successful return to the ice after being sidelined for 11 months.

For that, the center was announced Monday as the Golden Knights’ nominee for the Bill Masterton Memorial Trophy by the Las Vegas chapter of the Professional Hockey Writers Association.

The award goes to “the National Hockey League player who best exemplifies the qualities of perseverance, sportsmanship and dedication to hockey.”

Three finalists will be selected from the 32 nominees and announced at a later date. The winner will be revealed during the NHL Awards show, which reportedly will take place during the Stanley Cup Final at the host city.

Goaltender Robin Lehner won the Masterton Trophy in 2019 after his season with the New York Islanders and spoke candidly about his struggles with mental health and substance abuse in his acceptance speech.

“I enjoy the game. I love it. I try to do everything I can to be successful,” Eichel said. “I think the situation that I was in over the last year offered a lot of adversity and time to reflect and some obstacles to overcome. But, I’m not the only guy that’s overcome things, and I’m sure I won’t be last. I’m just happy to be playing hockey again.”

Eichel sustained a herniated disk in his neck while playing with the Buffalo Sabres in March 2021. He missed the remainder of the regular season and later said there was a “disconnect” between himself and the Sabres’ organization about how to treat the injury.

The sides feuded throughout the summer, with the Sabres preferring Eichel undergo a fusion procedure rather than the artificial disk replacement that had never been performed on an NHL player.

The standoff ended Nov. 4 with a trade to the Knights, who permitted Eichel to have the ADR surgery. Since then, Blackhawks forward Tyler Johnson also had the surgery performed.

By holding his ground in the dispute, Eichel could pave the way for the NHL Players’ Association to seek changes in the next round of negotiations for the collective bargaining agreement. Currently, clubs have the final authority to determine the course of treatment for injuries.

“I think when you have it taken away from you, sometimes we can take it for granted how lucky we are to play in the NHL,” Eichel said. “And that might sound cliche, but it’s an honor to be able to just come to the rink every day and play hockey.”

Eichel spent more than a month in North Carolina undergoing rehabilitation after his surgery and was given a three- to five-month recovery period.

He started practicing with the Knights in January and was cleared for full contact after the All-Star break.

Since his debut Feb. 16, Eichel leads the Knights with 12 goals. He has 21 points in 30 appearances to go with a 52 percent shot share at five-on-five.

“It’s always tough to be the first person to do something,” Eichel said. “But I felt really comfortable with it and confident enough to make that decision. I felt like it is the best one for me.

“It all worked out for me.”