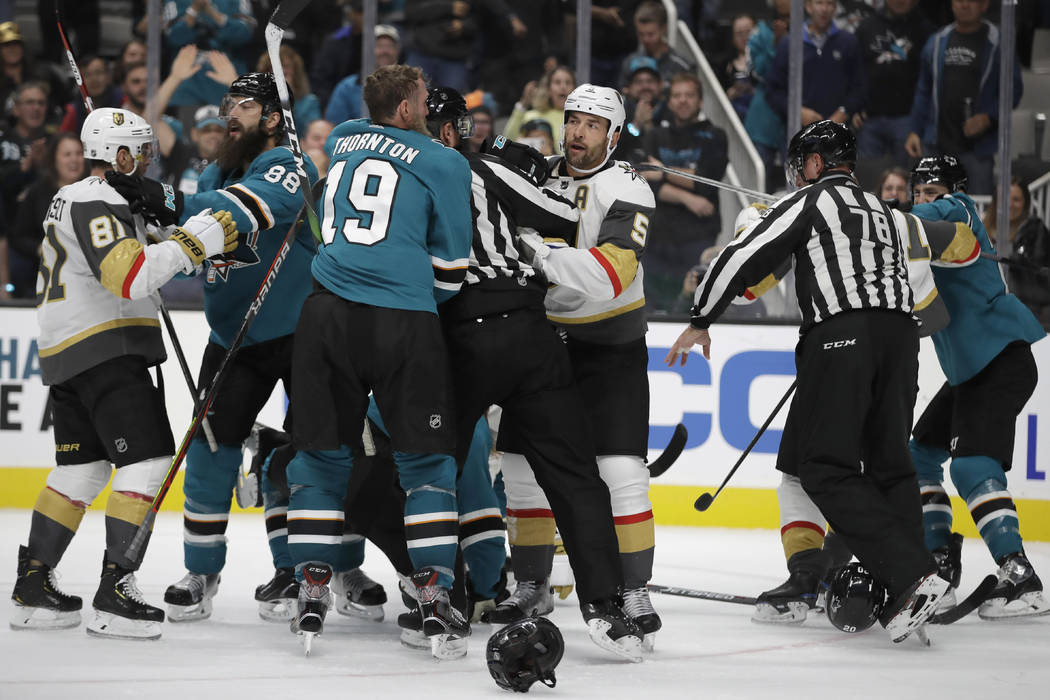 Officials try to stop a multi-player fight between the Vegas Golden Knights and the San Jose Sharks during the third period of an NHL hockey game Friday, Oct. 4, 2019, in San Jose, Calif. Sharks' Joe Thornton (19) and Golden Knights' Deryk Engelland (5) are at center. (AP Photo/Ben Margot) 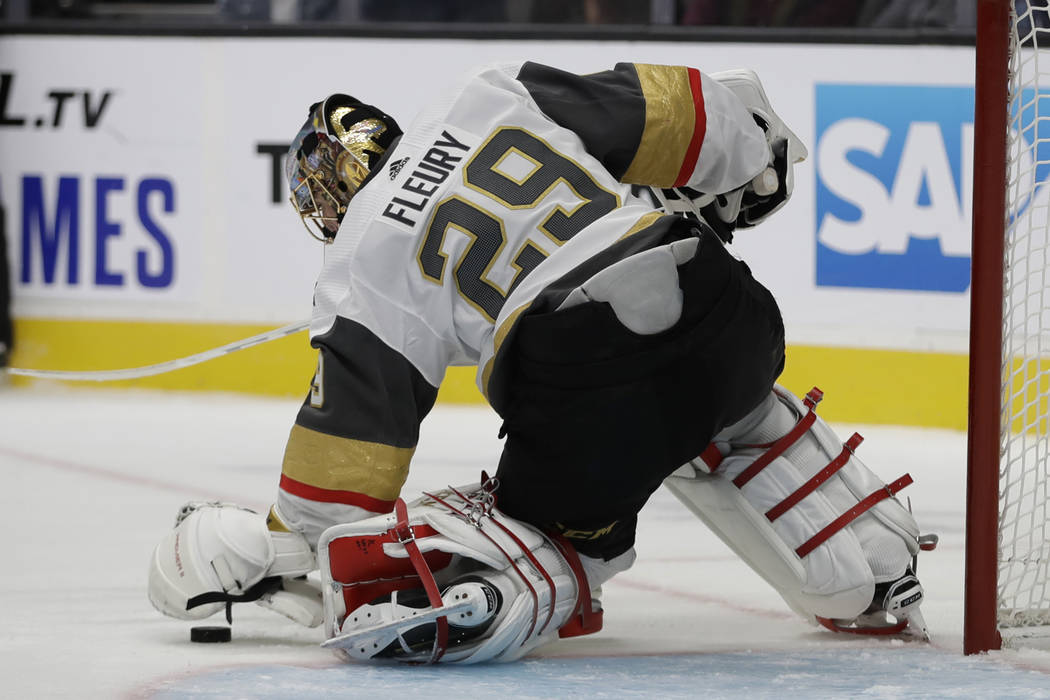 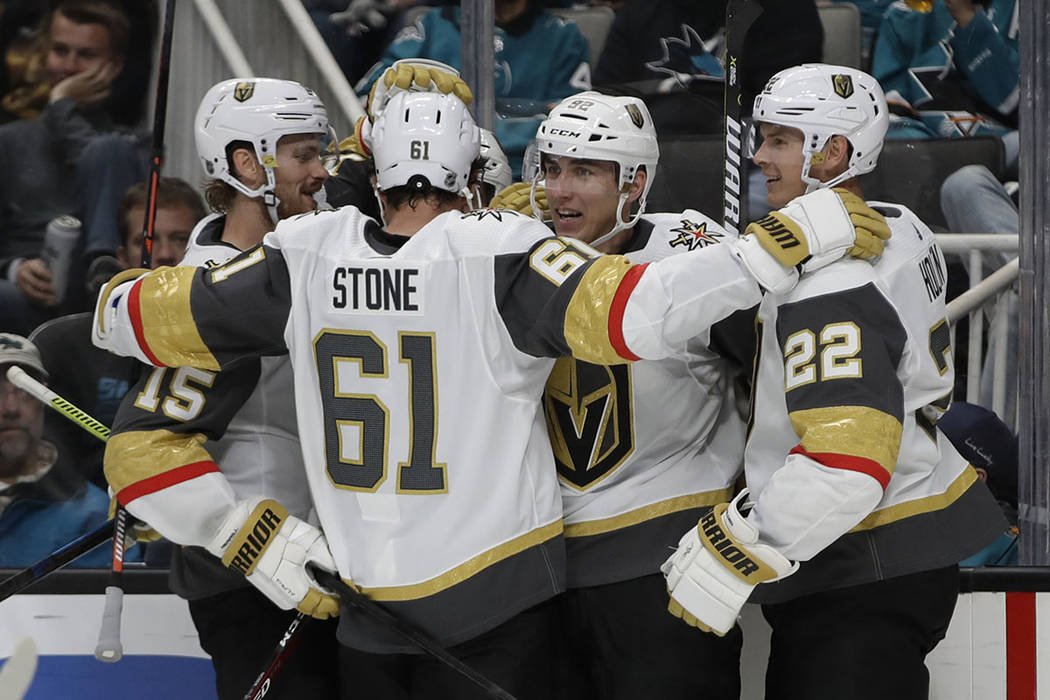 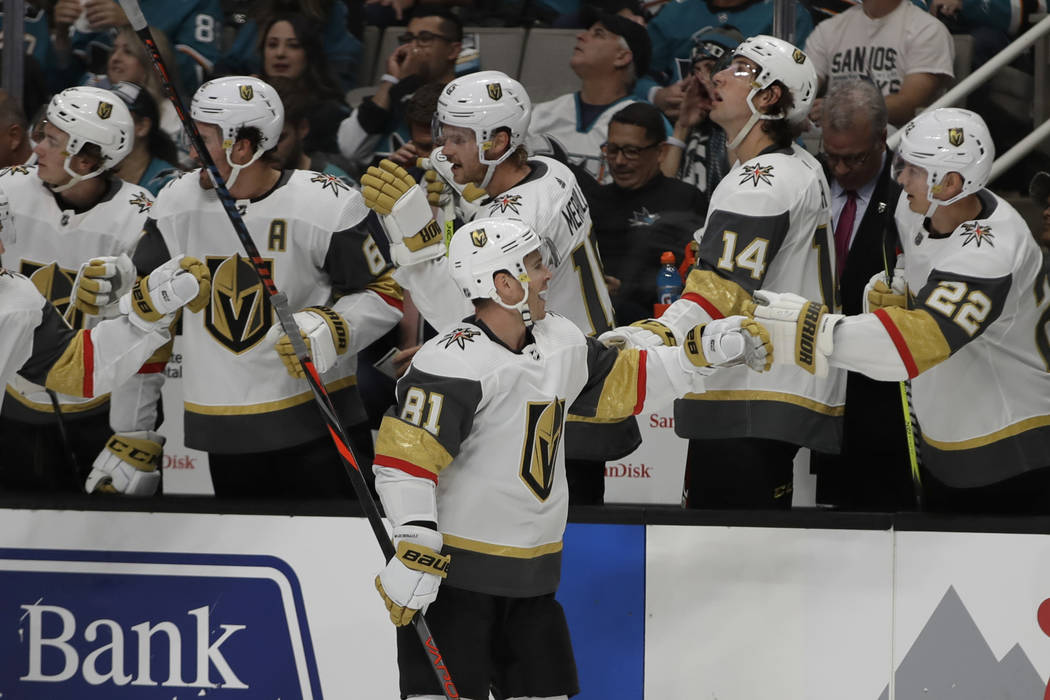 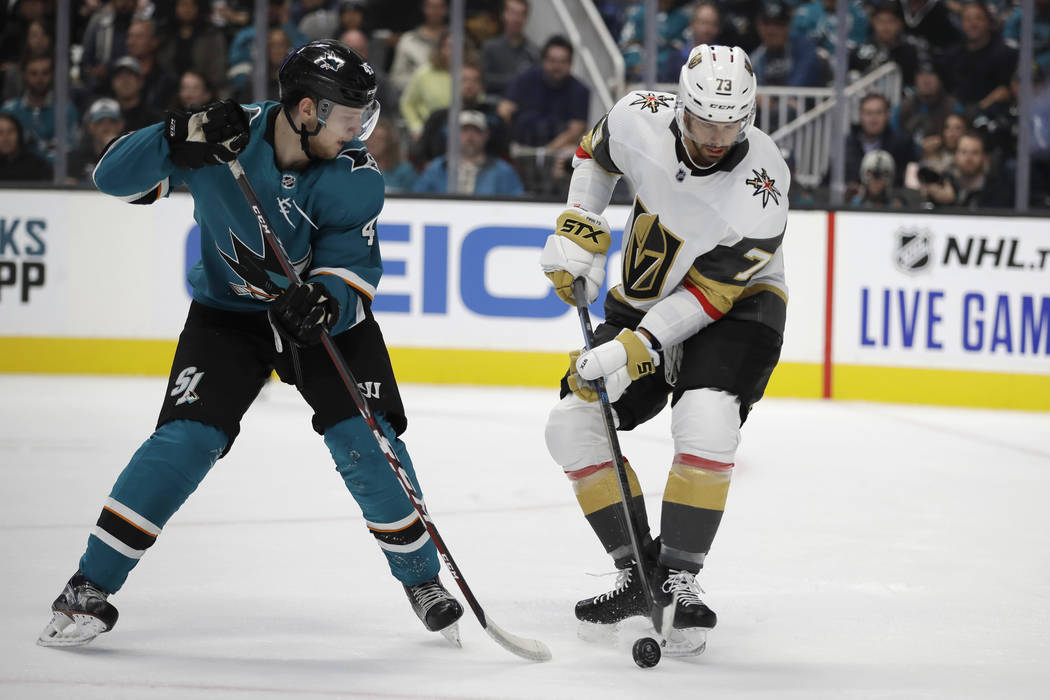 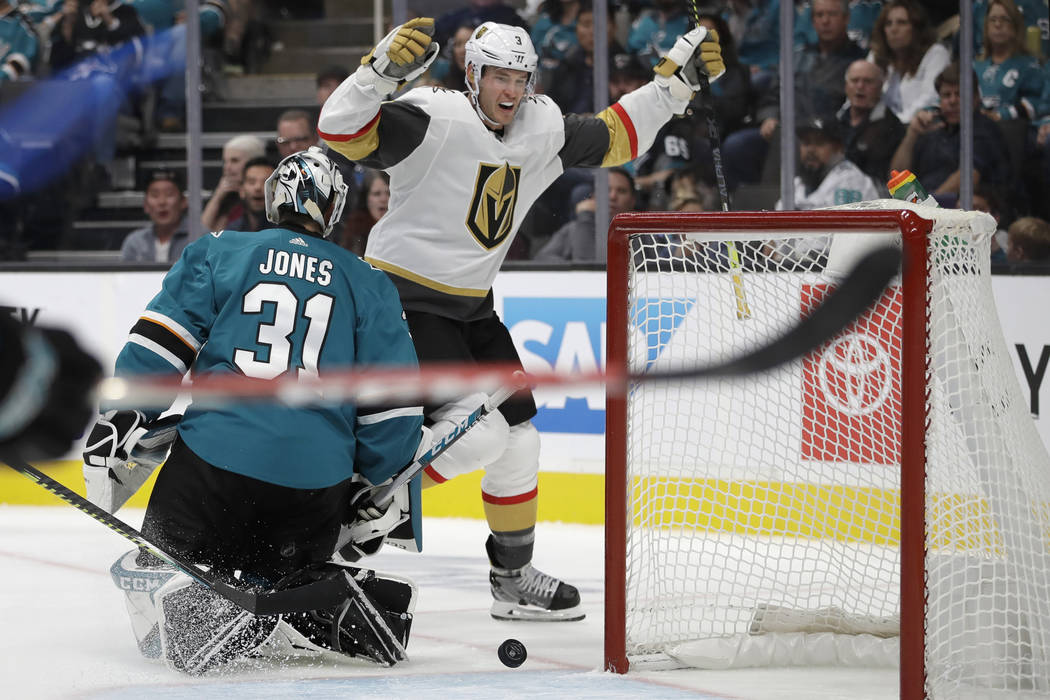 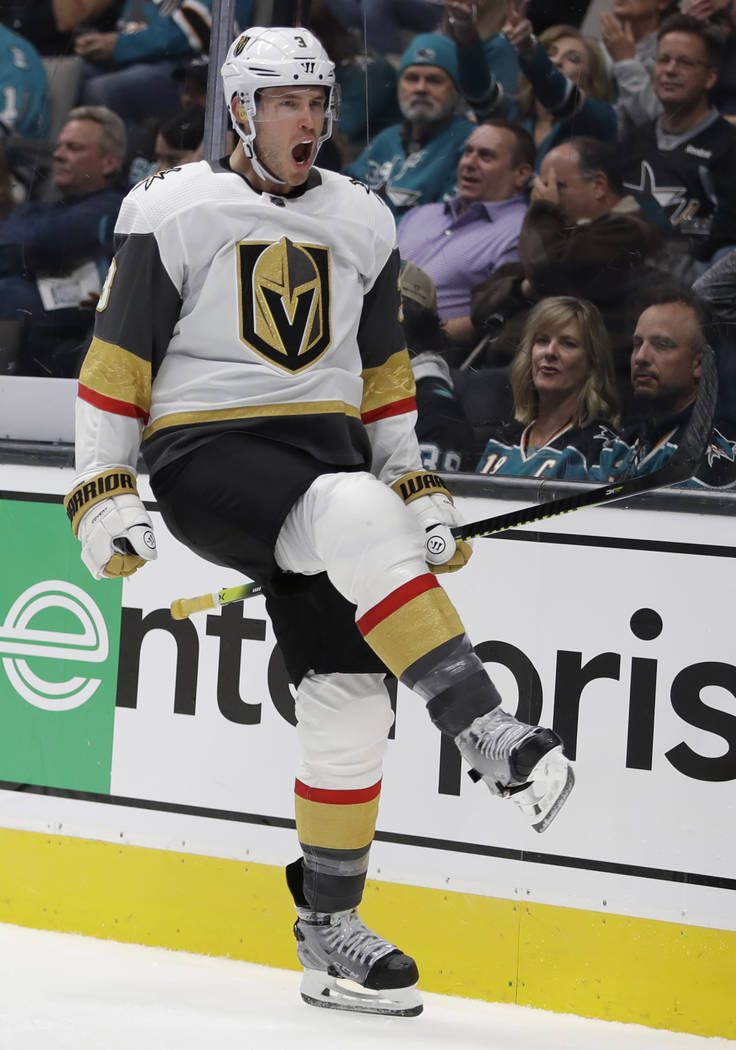 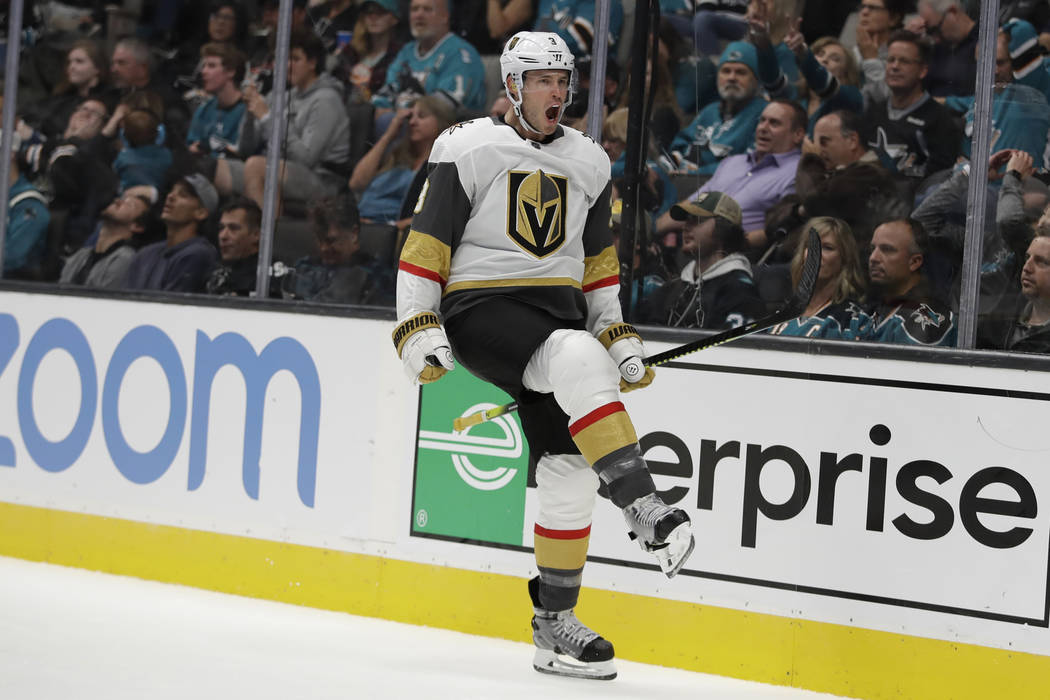 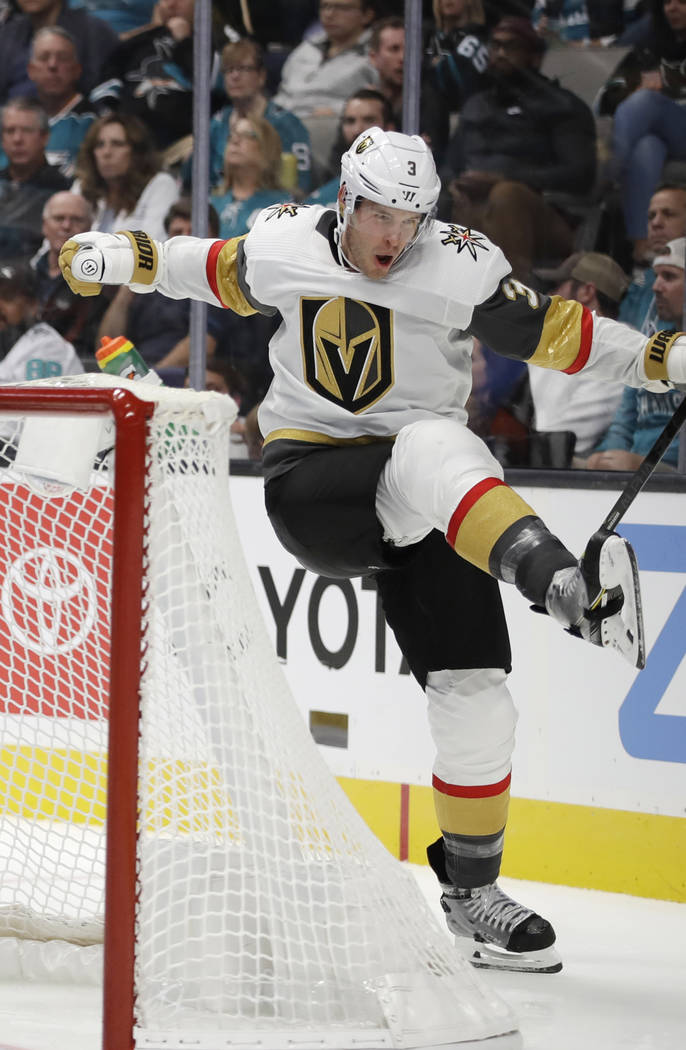 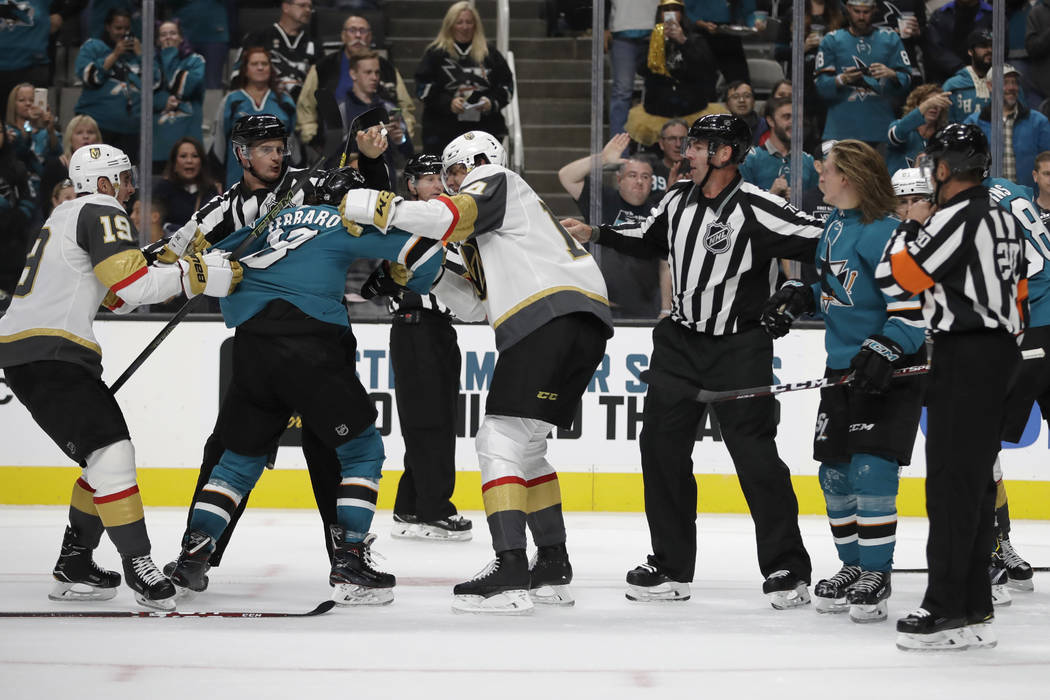 Officials try to stop a multi-player fight between the Vegas Golden Knights and the San Jose Sharks during the third period of an NHL hockey game Friday, Oct. 4, 2019, in San Jose, Calif. (AP Photo/Ben Margot) 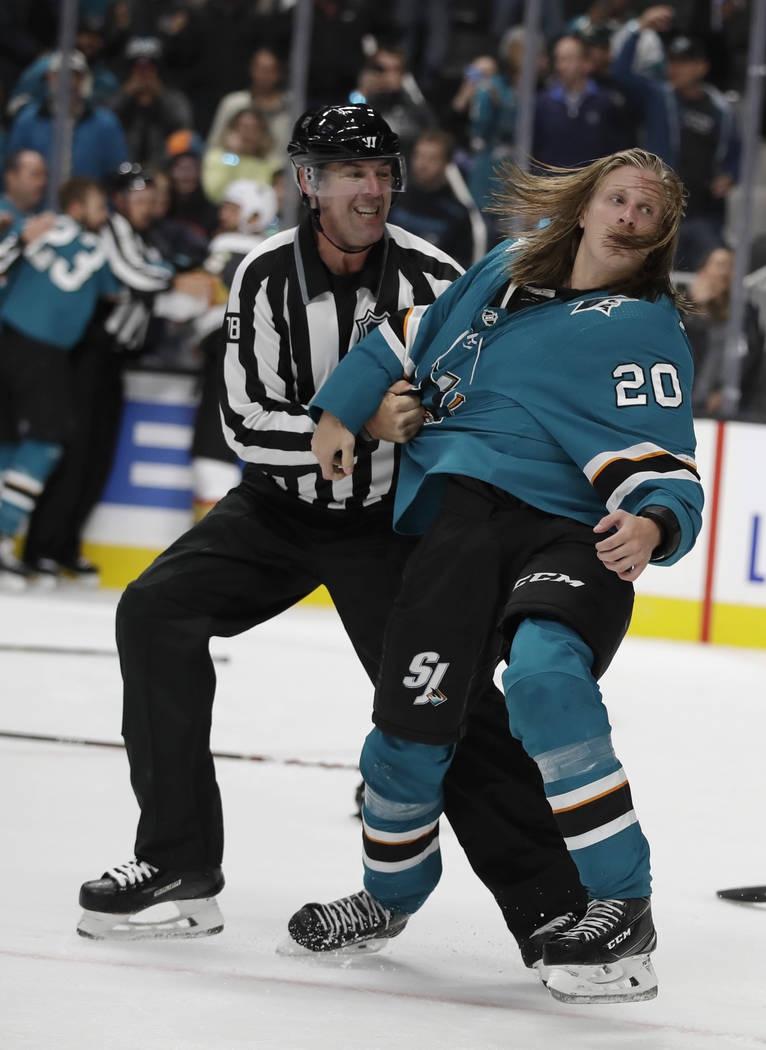 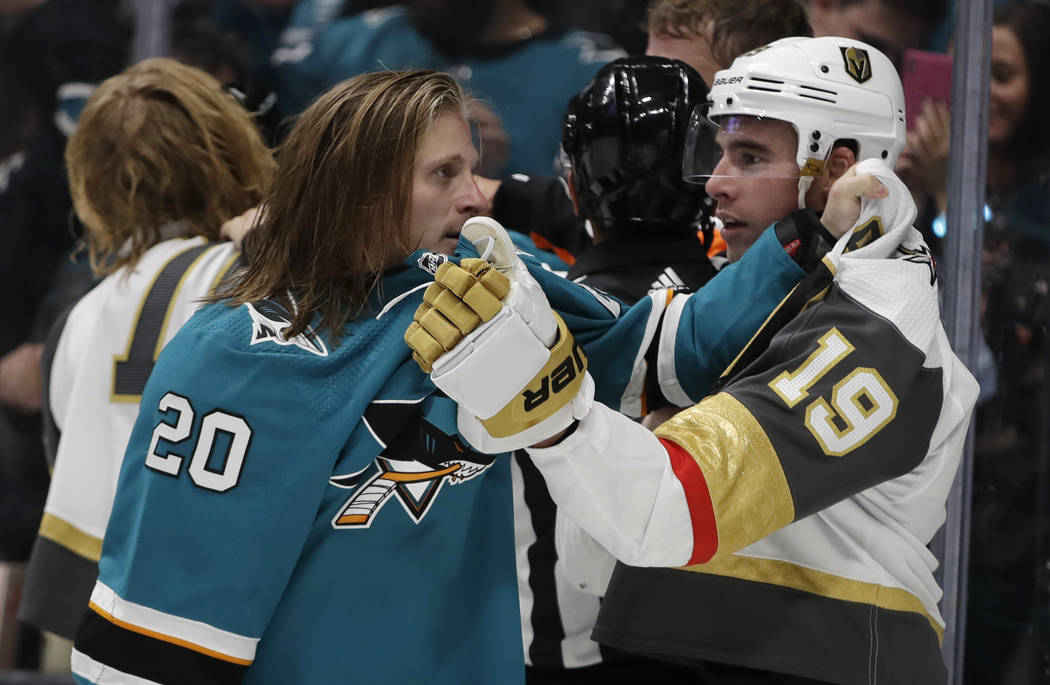 SAN JOSE, Calif. — As expected, plenty of shade was thrown the Golden Knights’ way during the pregame ceremony Friday at SAP Center.

But the Knights continued to dominate the NHL’s most heated rivalry.

Tomas Nosek had two goals and an assist, and Marc-Andre Fleury finished with 34 saves in the Knights’ 5-1 victory over the San Jose Sharks.

Fleury, making his 800th career NHL appearance, lost his shutout with 5:55 remaining when Barclay Goodrow flipped in a rebound.

William Carrier, Jonathan Marchessault and Brayden McNabb also scored for the Knights, who improved to 7-1-2 in the regular season against San Jose.

Here’s what we learned from the Knights’ victory:

Defenseman Nic Hague made his NHL debut in front of one of the league’s most hostile arenas, which is like taking your driver’s test during the Daytona 500 with a hyperactive wolverine loose in the car.

“It was obviously fast, and I didn’t know what to expect,” Hague said. “I tried to keep it simple and talk a lot. I thought I settled in and played a pretty decent game. There’s always going to be room for improvement.”

Hague’s parents, Bob and Sheila, made the trip from Kitchener, Ontario, for the game, and the 2017 second-round pick skated with Deryk Engelland.

Hague, who was 10 when Engelland made his NHL debut in 2009, also briefly saw time with the No. 2 power play unit.

He had a memorable ending, too, as he was tossed for the final 5:55 after picking up a 10-minute misconduct during a third-period scrum.

“It just happened,” Hague said. “I felt like they were just giving out 10(-minute misconducts) at the end. What are you going to do?”

There was an open competition for the job as fourth-line center during training camp, but after two games, it’s easy to see why Nosek won the job.

The 27-year-old former winger was noticeable in the season opener and notched a career-high three points in 17:13 of ice time Friday.

Nosek helped set up the Knights’ first goal with a sweet assist when he controlled the puck near the San Jose blue line after Valentin Zykov banked a pass off the boards, turned and sent a no-look pass to a streaking Carrier.

Later, Nosek cleaned up a rebound after Brandon Pirri’s shot hit the post to put the Knights ahead 4-0 late in the second period. He added a short-handed tally midway through the third.

Cody Eakin (lower body) remains day to day with a lower-body injury, but is eligible to be activated from injured reserve. That could leave the Knights with a surplus of centers and a tough lineup decision once he returns.

“I feel more comfortable (at center),” Nosek said. “I played there for my whole career pretty much. I just had to adjust here in Vegas because we had so many great centermen.”

The Knights’ penalty kill will be a punchline for San Jose fans from now until eternity after the Sharks famously scored four times in 4:01 with the man-advantage during Game 7 of the Western Conference quarterfinals last season.

McNabb scored short-handed in the second period to put the Knights ahead 3-0, and Nosek added a short-handed goal in the third period.

It marked the first time the Knights have scored two short-handed goals in a game.

It was the third shorty in two games for the Knights, who successfully killed 10 straight penalties in the home-and-home series.