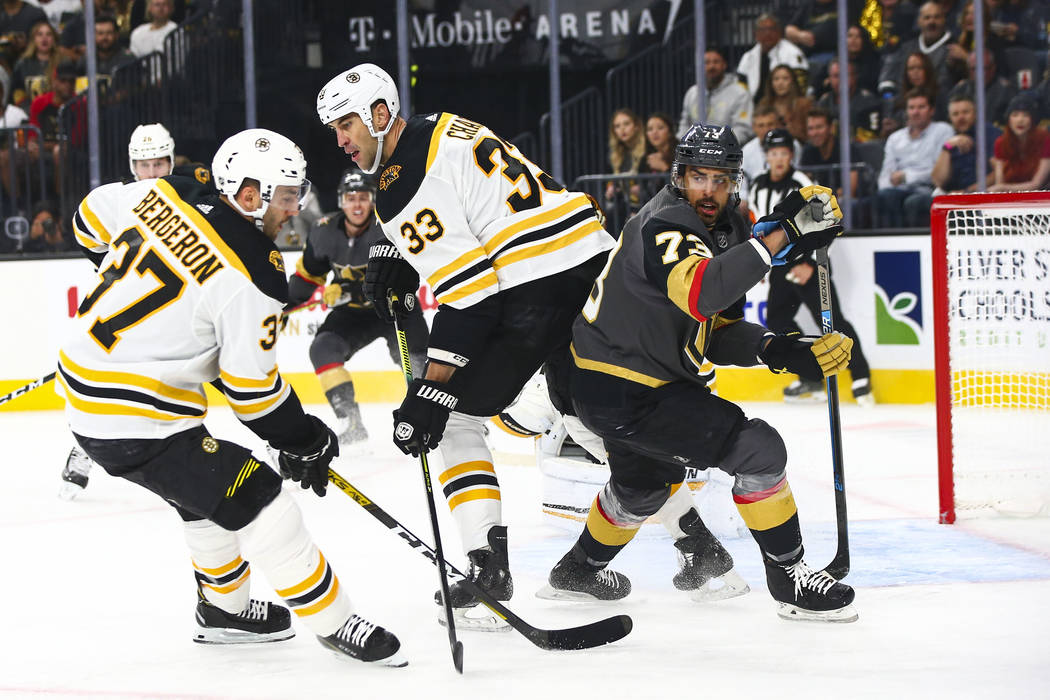 Boston Bruins captain Zdeno Chara is a marvel in the NHL.

He’s the tallest player in league history at 6 feet, 9 inches. And after center Matt Cullen retired in July, the defenseman is also the oldest at 42.

That makes him the envy of several blueliners in the Golden Knights’ locker room, who could only dream of careers so prolific.

“It’s unreal,” defenseman Brayden McNabb said. “Obviously, he’s kept his body in great shape and taken care of himself over the years. It’s awesome to see.”

Chara, who will turn 43 on March 18, has played the 23rd-most games in NHL history and the seventh-most among defensemen. By playing in Tuesday’s game against the Knights at T-Mobile Arena, he passed “The Great One” himself, Wayne Gretzky, for sole possession of 23rd place.

Chara told NHL.com in March that he had no plans to retire, just before he signed a one-year contract extension with the Bruins. He probably was influenced by the fact that his team is expected to be a Stanley Cup contender after finishing runner-up to the St. Louis Blues last season. Chara wants to win a second title so badly that he played in Game 5 of the Stanley Cup Final after breaking his jaw in multiple places in Game 4.

The definition of a warrior. 💪

“There’s a lot of tough guys in the league, and he’s definitely one of them,” Knights defenseman Shea Theodore said.

The toughness is just part of what makes the 2009 Norris Trophy (best defenseman) winner and surefire Hall of Famer stand out. He has one of the league’s hardest shots, plays physical and still makes up one half of the Bruins’ top defensive pairing.

“He’s still playing good, too,” said Knights coach Gerard Gallant, who retired from playing at age 32 because of a back injury. “It’s not like he’s dropped off. He’s still a great player.”

Chara’s career begs the question — could the Knights’ defensemen play until they’re 42? Theodore, 24, said “I hope so.” McNabb, 28, agreed.

The Knights will host an exclusive viewing of the documentary “Valiant,” which chronicles the team’s historical inaugural season, next month at T-Mobile Arena.

The viewing will be Nov. 17 before the Knights play the Calgary Flames at 4 p.m. Doors will open at 1 p.m., and the film will begin at 1:30 p.m. Fans must have a ticket to the Calgary game to attend.

After the viewing, there will be a question and answer session with the “Valiant” production team and some individuals appearing in the film.