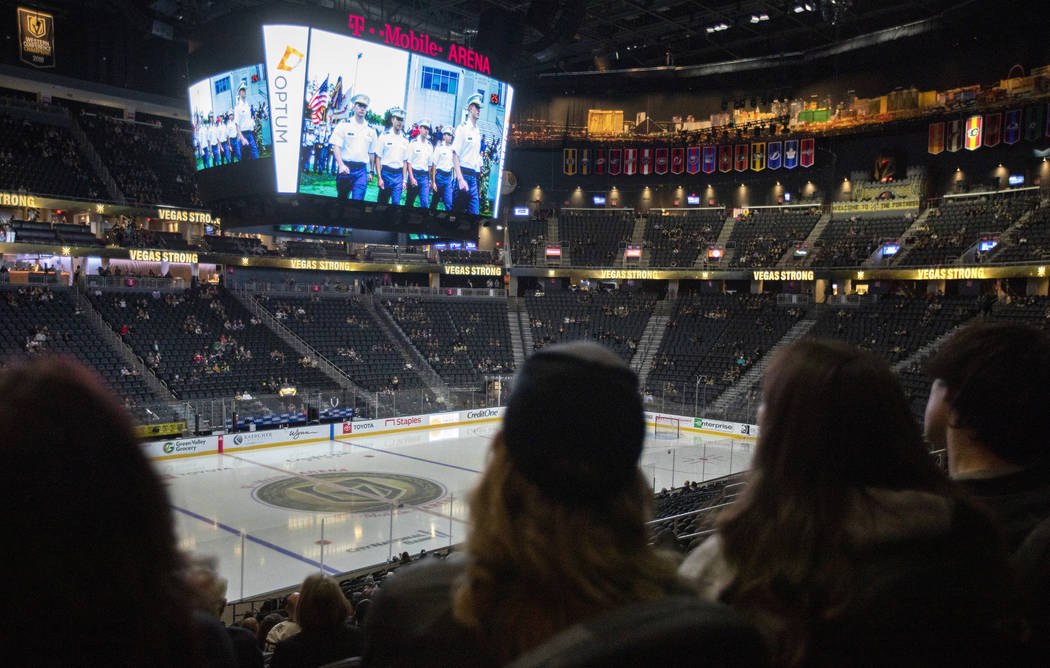 The documentary "Valiant," about the Golden Knights' first season, screens on the scoreboard before the game on Sunday, Nov. 17, 2019, at T-Mobile Arena, in Las Vegas. (Ellen Schmidt/Las Vegas Review-Journal) @ellenkschmidt_ 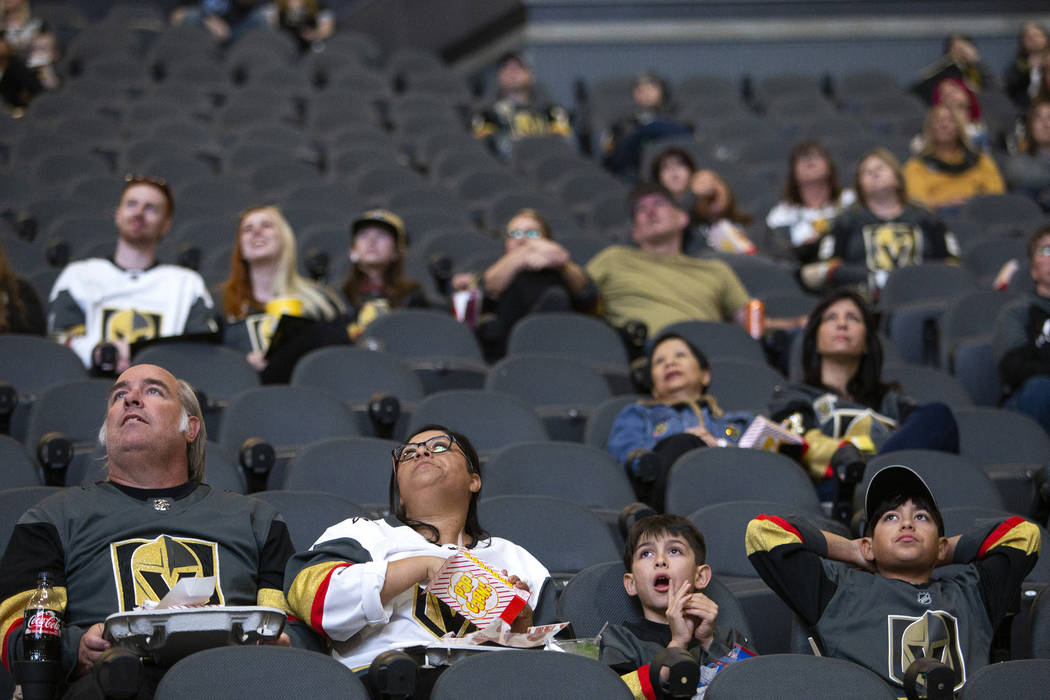 Chris Steiner, left, Claudia Steiner, center left, and their sons Connor Steiner, 9, and Cole Steiner, 10, watch the documentary "Valiant," before the NHL game against the Calgary Flames on Sunday, Nov. 17, 2019, at T-Mobile Arena, in Las Vegas. The documentary is about the Golden Knights' first season. (Ellen Schmidt/Las Vegas Review-Journal) @ellenkschmidt_ 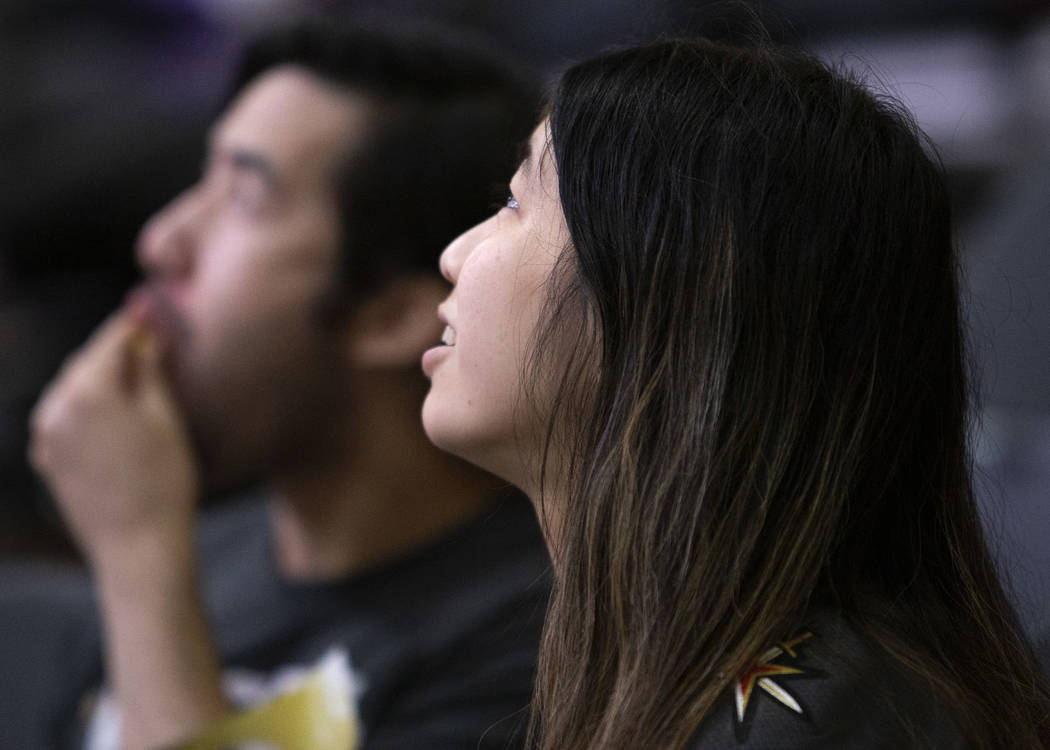 Eva Mar, right, and her brother Daniel Mar, left, watch as "Valiant," a documentary about the Golden Knights' first season, screens on the scoreboard before the game on Sunday, Nov. 17, 2019, at T-Mobile Arena, in Las Vegas. (Ellen Schmidt/Las Vegas Review-Journal) @ellenkschmidt_ 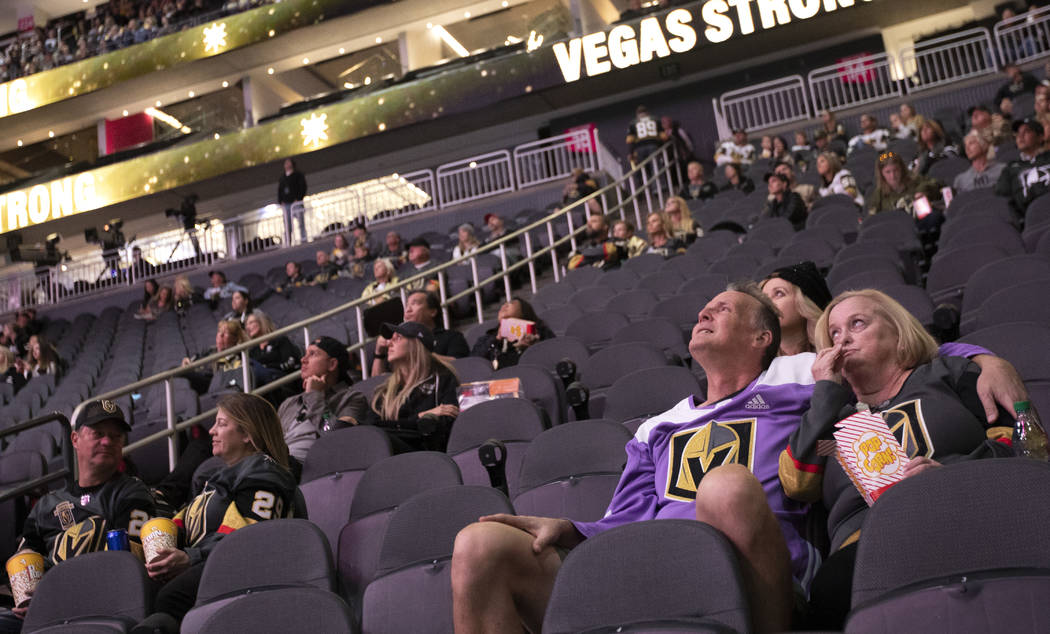 Michael Sarabyn and Lori Sarabyn, right, watch as "Valiant," a documentary about the Golden Knights' first season, screens on the scoreboard before the game on Sunday, Nov. 17, 2019, at T-Mobile Arena, in Las Vegas. The Sarabyn's are Golden Knights season ticket holders. (Ellen Schmidt/Las Vegas Review-Journal) @ellenkschmidt_

It was so quiet you could hear a puck drop.

Julie Duffy wiped her eyes as she watched the 58 seconds of silence for the victims of the Route 91 Harvest festival shooting. The stirring tribute — a scene from the Vegas Golden Knights’ home opener on Oct. 10, 2017 — was among many emotional moments during the premiere of “Valiant,” the documentary chronicling that storybook inaugural season.

“It was absolutely phenomenal,” Duffy, seated a handful of rows from center ice, said of the film.

“I had tears in my eyes. I had a lump in my throat,” she said, adding that she was supposed to attend the Oct. 1 concert but didn’t make it. “This brought a lot of bad memories, a lot of heartache. But we are Vegas Strong through and through.”

A couple of thousand ticket holders braved marathon traffic and road closures to arrive at T-Mobile Arena three hours before game time to watch the long-in-the-works documentary. Fans clutched mini posters celebrating the movie and craned their necks to take it all in on the scoreboard as Zambonis did their work on the ice below.

The special event was “Valiant’s” only planned public screening before its Dec. 13 release on home video.

“It takes you through all the emotions that you went through at the very beginning,” Brian Baumgartner recalled.

His friend Robert Edwards, a self-described fan from Day One, also teared up at times. “Reliving the Finals, that was hard as well,” he said. The duo chose the moments when the Washington Capitals celebrated their Stanley Cup victory on the T-Mobile Arena ice for a bathroom break.

“Valiant” writer-director Cruz Angeles found himself staring in the arena rafters at the banner commemorating the 58 victims as it was being raised in the film.

“It feels like you’re at a church, because the spirit of a lot of what happened in this story happened in this place. To me, it was beautiful,” he said, shortly after participating in a Q&A with producer Virgil Price and Knights owner Bill Foley that was broadcast throughout the arena.

“We hope we have created something that is respectful to all the victims and their families,” Price added.

There was no way of knowing when the premiere was announced Oct. 8 that the Knights would be mired in just their second-ever five-game losing streak. At about the halfway point of the 93-minute film, “Valiant” begins to take on a more celebratory feel. Seeing the highlights of that historic season reminded Baumgartner and other fans why they fell in love with the team in the first place.

“Hopefully, it’s a nice kick in the (glutes),” Baumgartner said before the game. Price said he could only hope the movie inspired the players. Hours after the screening, the scoring floodgates opened for the Knights in a 6-0 drubbing of the Calgary Flames.

Steve Mayer, the NHL’s chief content officer, called the “Valiant” premiere a testament to the fans.

“Think about it. They’re going to be here for six or seven hours. That’s quite a commitment,” he said, standing outside one of the arena’s luxury suites. “And I think that just shows how meaningful the story and the team is to these fans.”