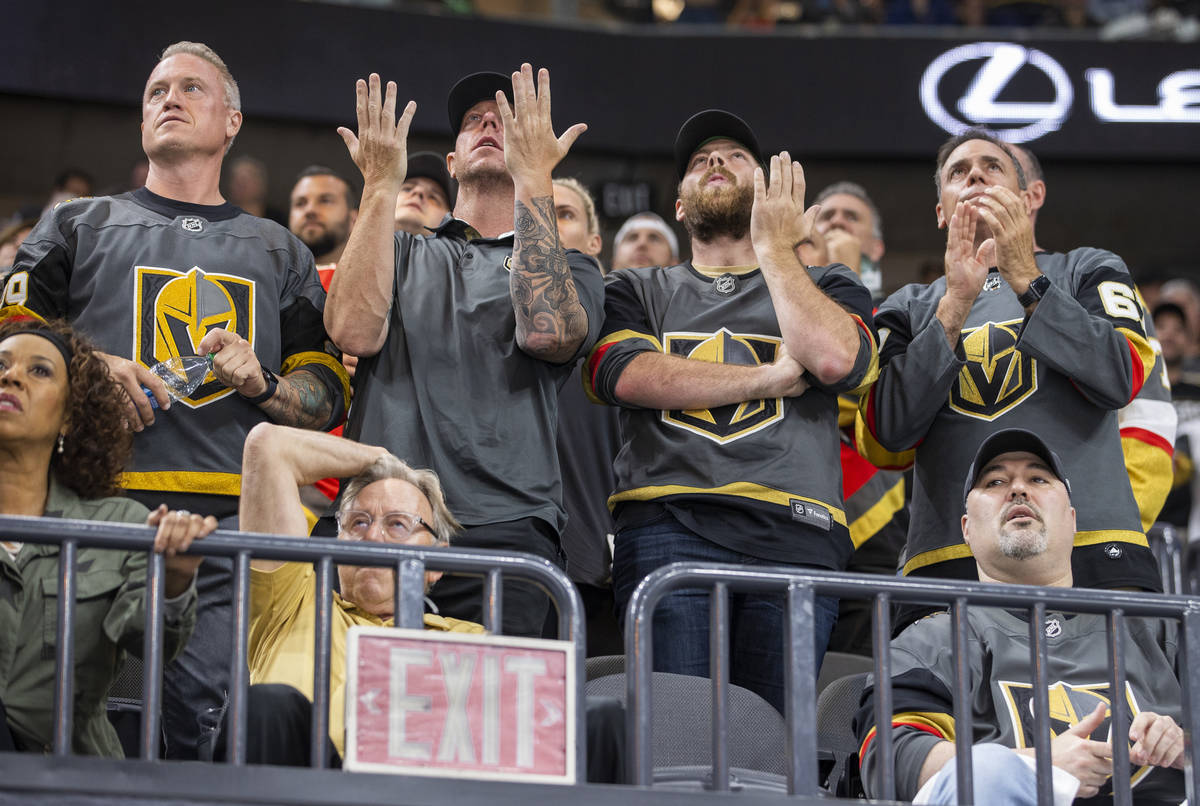 Golden Knights fans are dismayed as a goal is not counted versus the Montreal Canadiens during the second period of Game 2 of an NHL hockey Stanley Cup semifinal playoff series against the Montreal Canadiens at T-Mobile Arena on Wednesday, June 16, 2021, in Las Vegas. (L.E. Baskow/Las Vegas Review-Journal) @Left_Eye_Images 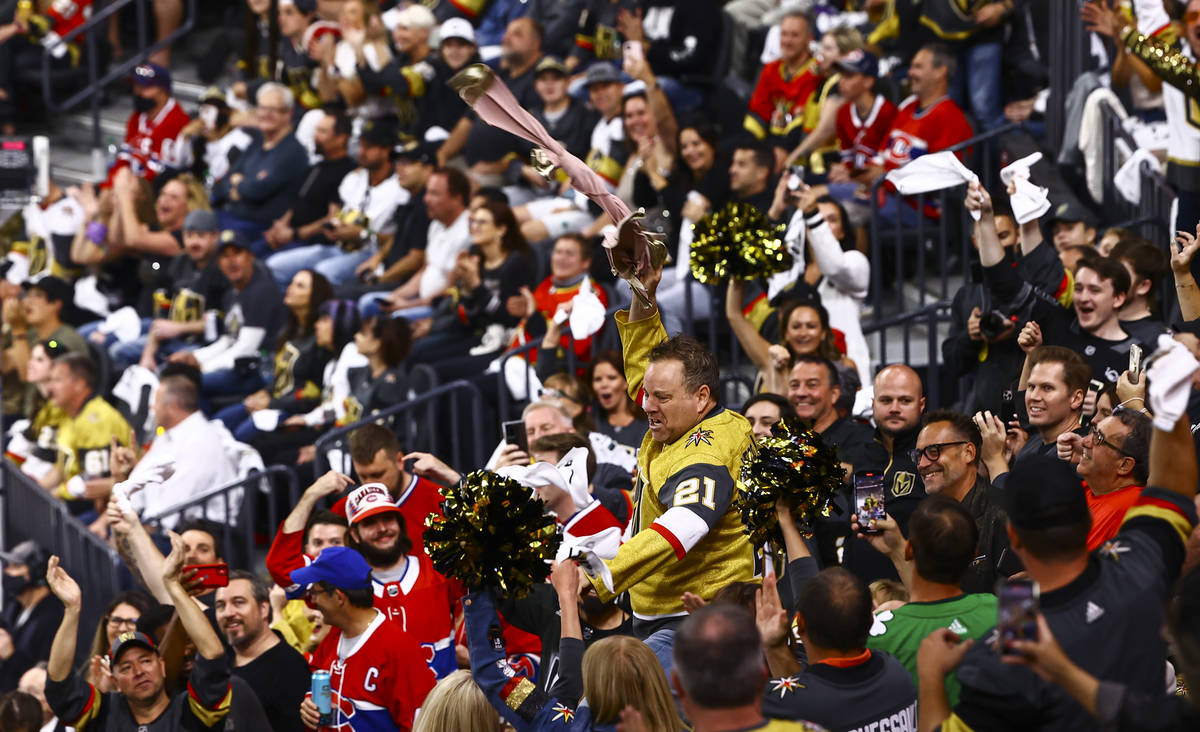 Cameron Hughes performs to hype up the crowd during the first period of Game 2 in an NHL hockey Stanley Cup semifinal playoff series between the Golden Knights and Montreal Canadiens at T-Mobile Arena in Las Vegas on Wednesday, June 16, 2021. (Chase Stevens/Las Vegas Review-Journal) @csstevensphoto 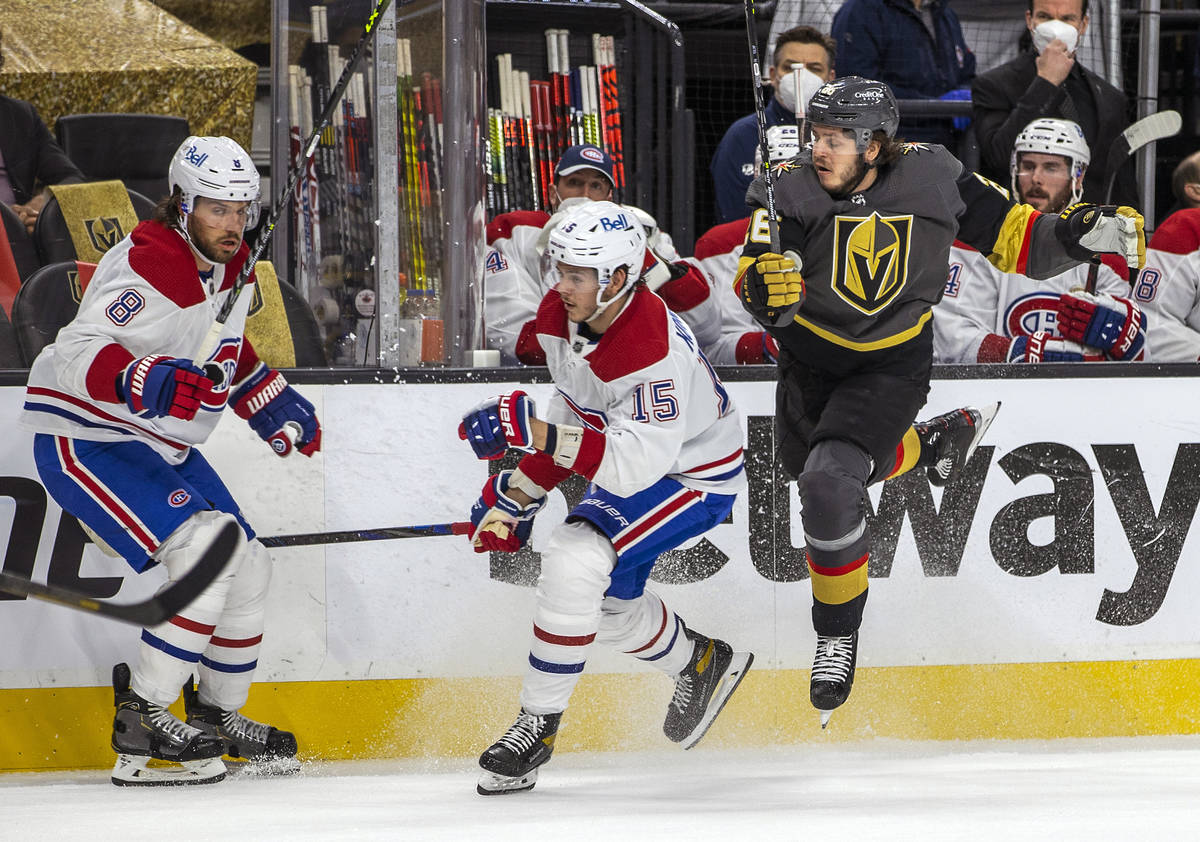 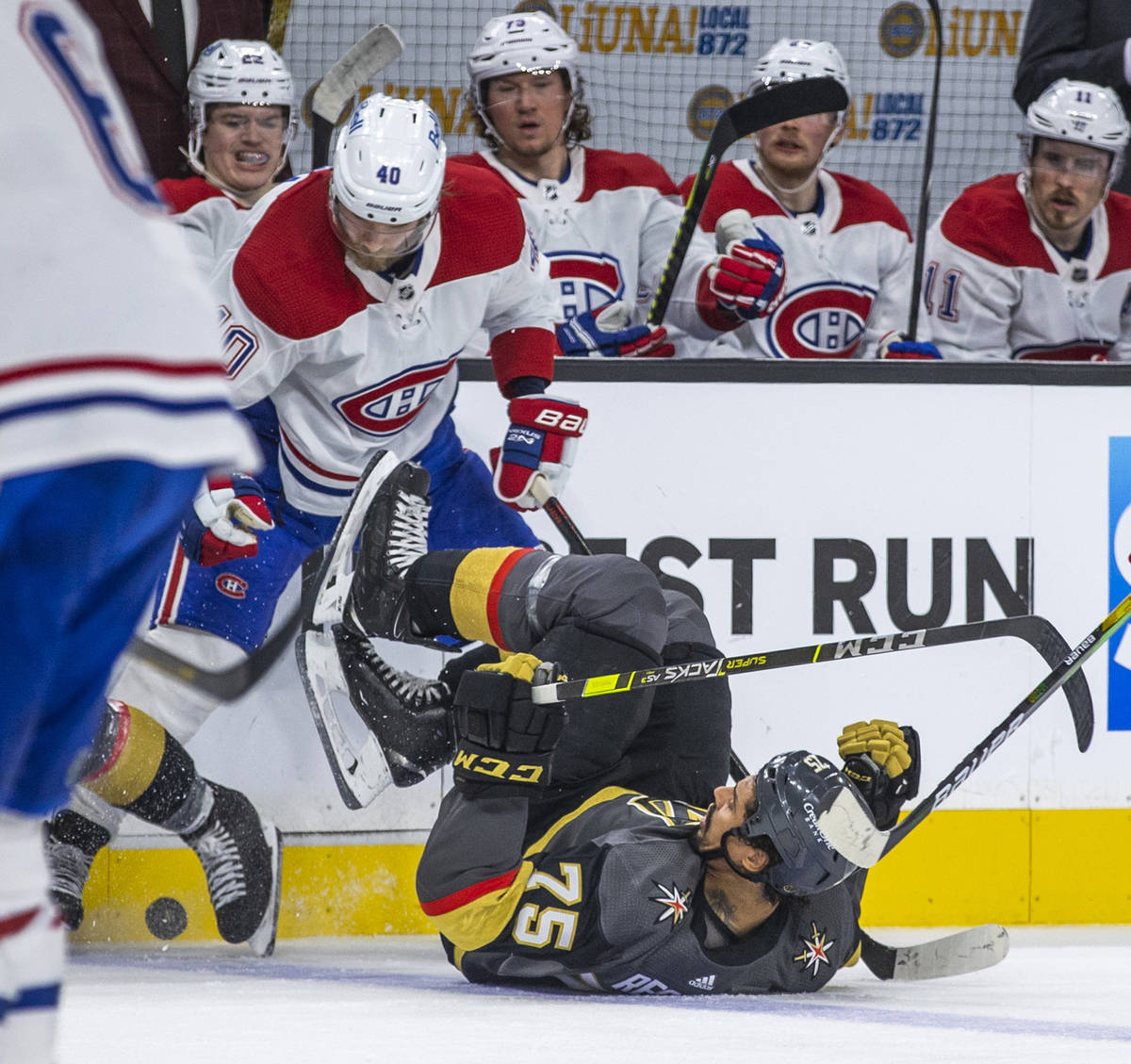 Golden Knights right wing Ryan Reaves (75) is taken to the ice while fighting for the puck with Montreal Canadiens right wing Joel Armia (40) during the first period of Game 2 of an NHL hockey Stanley Cup semifinal playoff series against the Montreal Canadiens at T-Mobile Arena on Wednesday, June 16, 2021, in Las Vegas. (L.E. Baskow/Las Vegas Review-Journal) @Left_Eye_Images 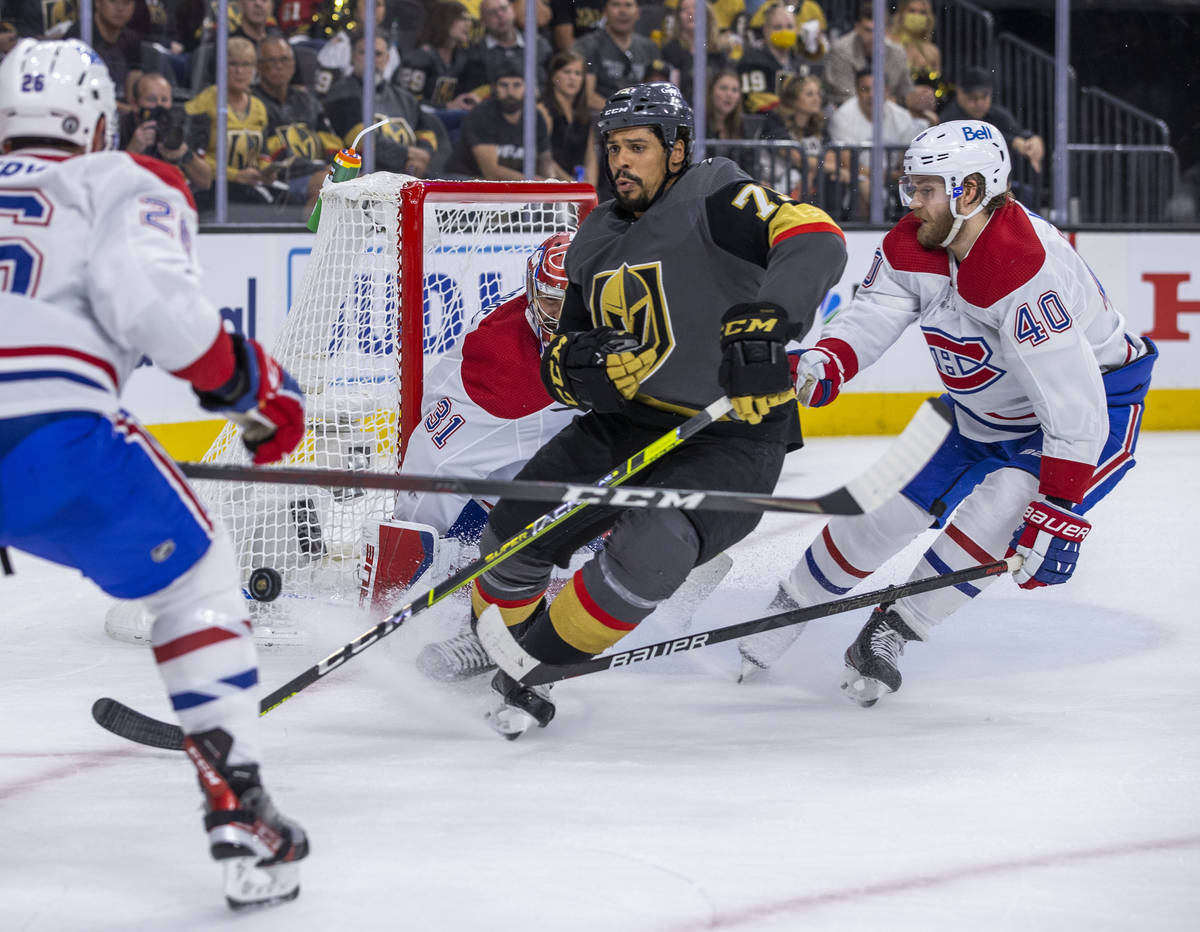 Golden Knights right wing Ryan Reaves (75) is late to the net for a shot versus Montreal Canadiens goaltender Carey Price (31) and others during the first period of Game 2 of an NHL hockey Stanley Cup semifinal playoff series against the Montreal Canadiens at T-Mobile Arena on Wednesday, June 16, 2021, in Las Vegas. (L.E. Baskow/Las Vegas Review-Journal) @Left_Eye_Images

The Golden Knights have boldly gone where no other U.S.-based NHL team has this season: Canada.

Montreal became the league’s first team to cross the U.S.-Canada border when it came to Las Vegas for Games 1 and 2 of its semifinal series. It’s the Knights’ turn now because of a special exemption from the Canadian government that allows them to avoid the usual mandatory 14-day quarantine for travelers.

The trip is far different from the ones the team made in the first two rounds of the playoffs because of the extra rules and restrictions in Canada. But the Knights aren’t letting that distract them as they seek their second Stanley Cup Final appearance in four seasons.

The best-of-seven series with the Canadiens is tied 1-1. Game 3 is 5 p.m. Friday at the Bell Centre in Montreal.

“It wasn’t that long ago we were eating our meals in boxes that you pick up in the lobby on your way through to checking in,” Knights coach Pete DeBoer said. “We’ll get through it. It’s a business trip. We’re here to win some hockey games.”

The Knights stayed awhile the last time they went to Canada.

They were in the NHL’s secure zone in Edmonton, Alberta, for 51 days for the 2020 postseason during their run to the Western Conference Final. Everyone was largely restricted to the rink, their hotel rooms and a few common areas. The setup will be similar for the Knights’ current stay.

The government exemption prevents them from being cooped up for two weeks, but they still need to serve a modified quarantine. Contact with the public will be limited as much as possible. Players will be tested for COVID-19 daily, after off-day testing had gone away for fully vaccinated individuals.

It will be a change for the Knights, who could get together in small groups and dine at restaurants during the playoffs if they were fully vaccinated.

“Coming here, it does feel a little more like the beginning of the season when things were more tense,” right wing Ryan Reaves said. “It’s not like we’re going out and hitting the town anytime soon. It’s not that big of a deal.”

The enhanced measures are in place because Canada and the U.S. are in different places in the fight against COVID-19.

That means many of the restrictions that have been lifted in states across the U.S. recently are still in place in Canada.

“It’s kind of sad, the situation where they’re in right now,” said left wing Jonathan Marchessault, one of four Quebec natives on the Knights. “We’re just here to get the job done.”

One of the key differences between Las Vegas’ and Montreal’s rules are the number of fans allowed to attend games.

The Knights have had full-capacity crowds for their past five games at T-Mobile Arena. The Canadiens weren’t allowed to have fans until their two most recent home games in the second round against the Winnipeg Jets. They were capped at 2,500 spectators.

The Quebec government is allowing that number to rise to 3,500 for Friday’s Game 3 and Sunday’s Game 4. It will be the smallest crowd the Knights have played before in the postseason.

“I’m sure they’ll crank up the music, and the fans, as many fans as they have, will be as loud as they can be,” Reaves said. “At the beginning of the year, we played in some buildings that had a couple thousand fans here or there, so I think we’re used to it. It’s obviously going to be a little bit of a change because we’re playing in front of 18,000-plus in Vegas and the show that we put on there.”