Golden Knights discuss their Game 6 loss to the Wild from the Xcel Energy Center and look at what they must do to win Game 7. (Heidi Fang/Las Vegas Review-Journal) 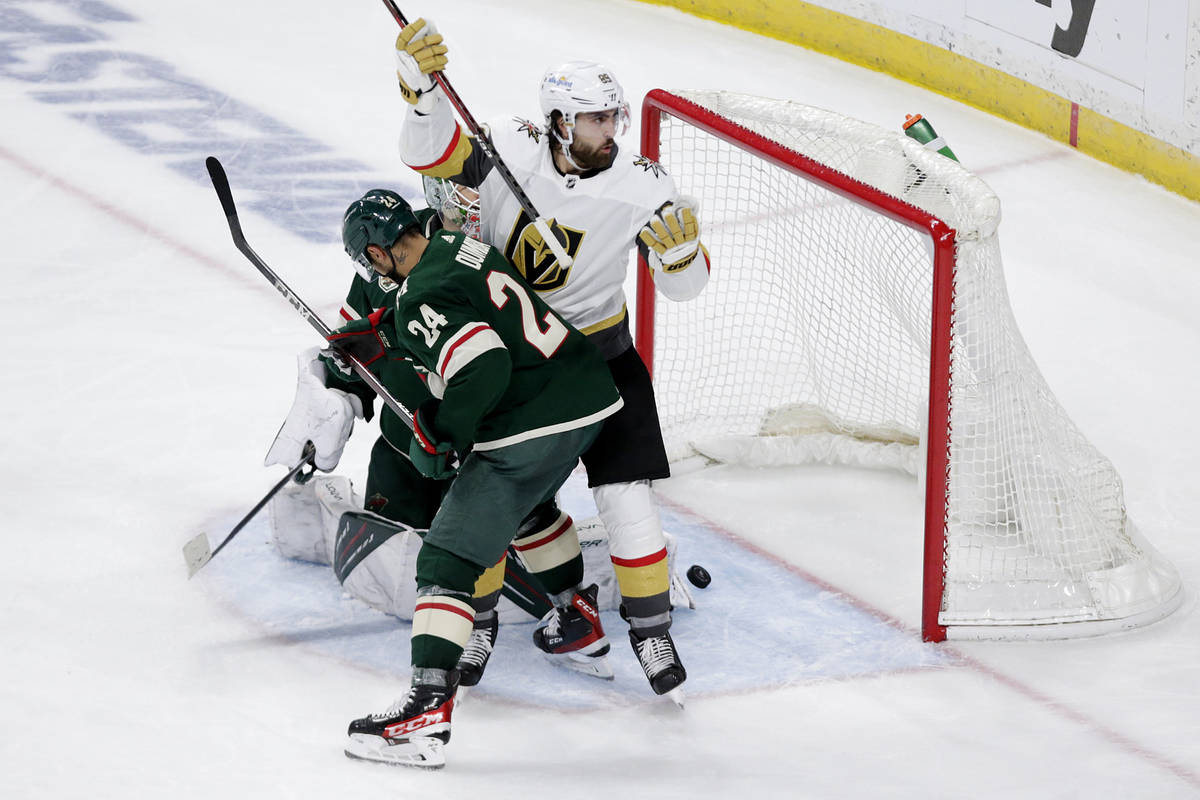 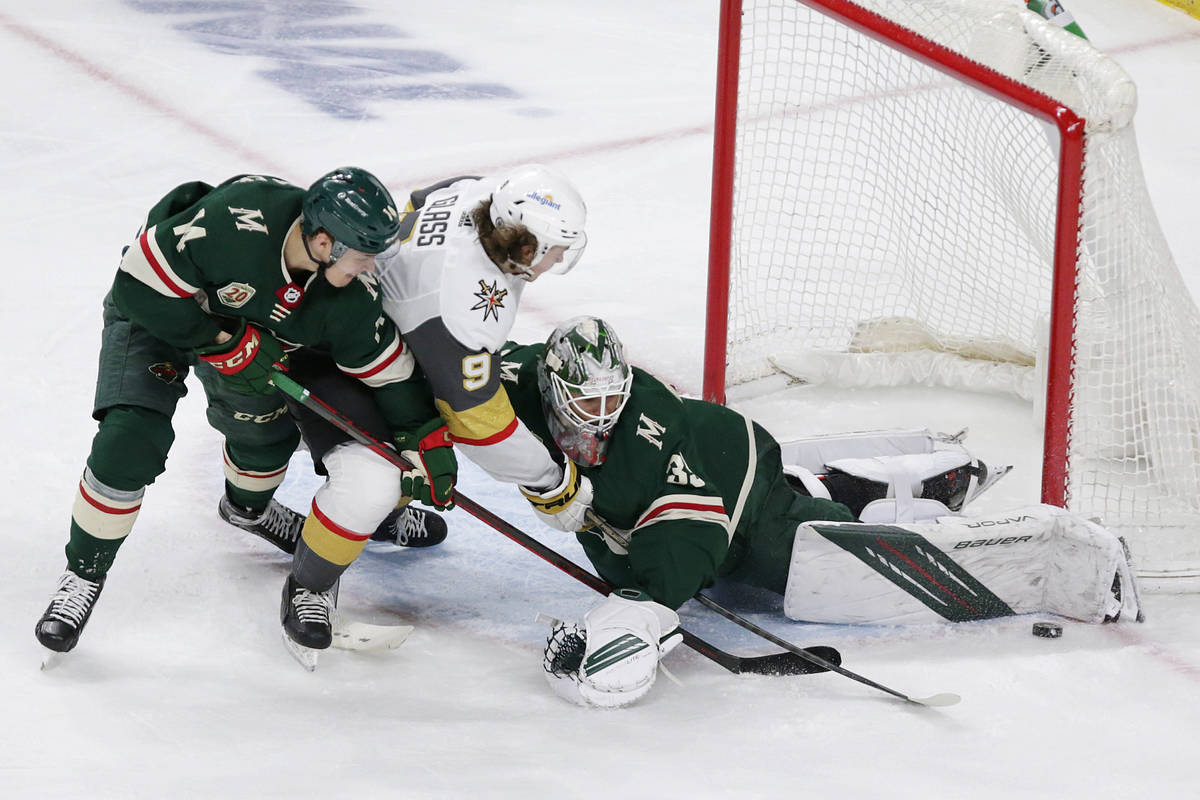 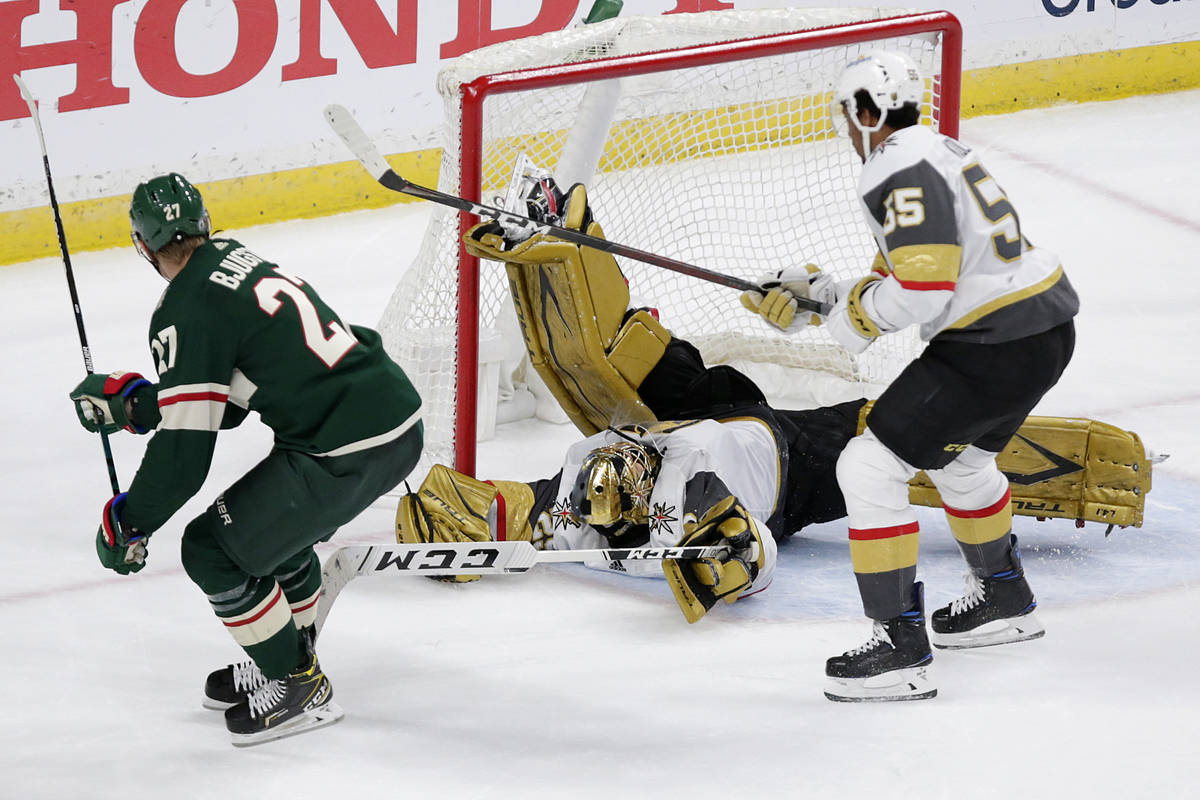 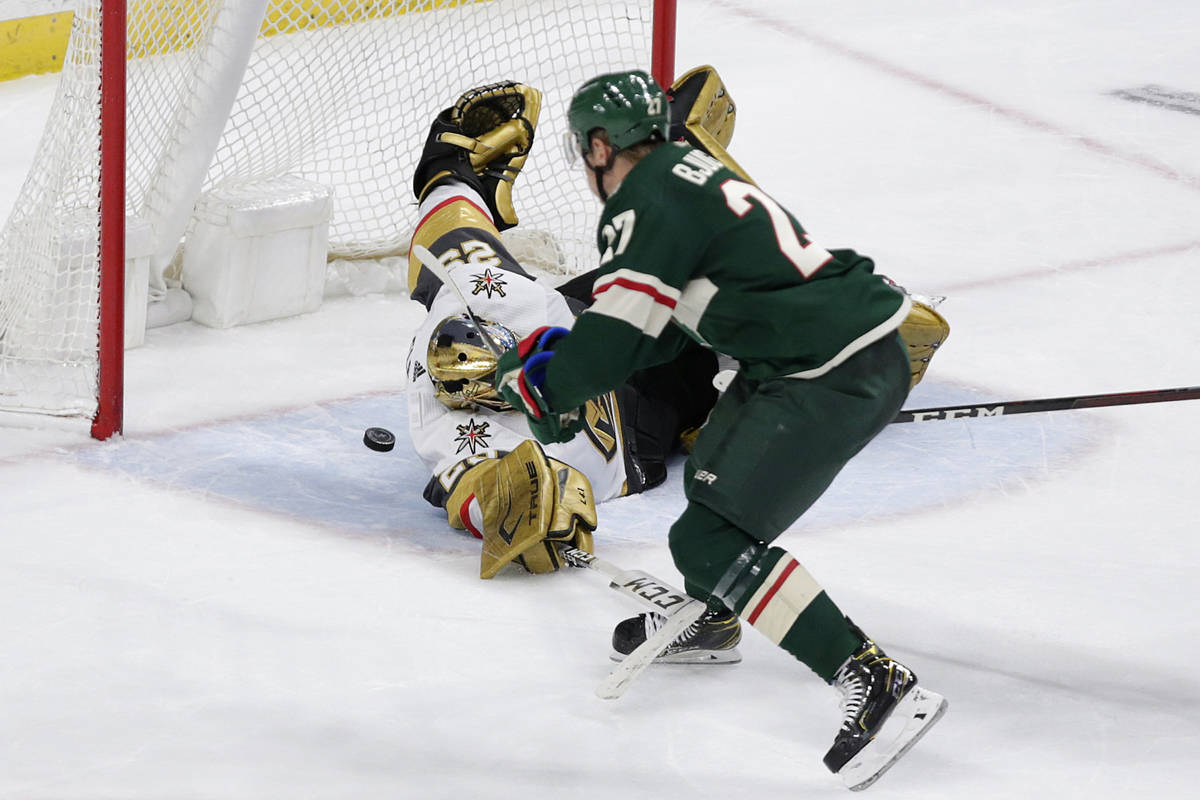 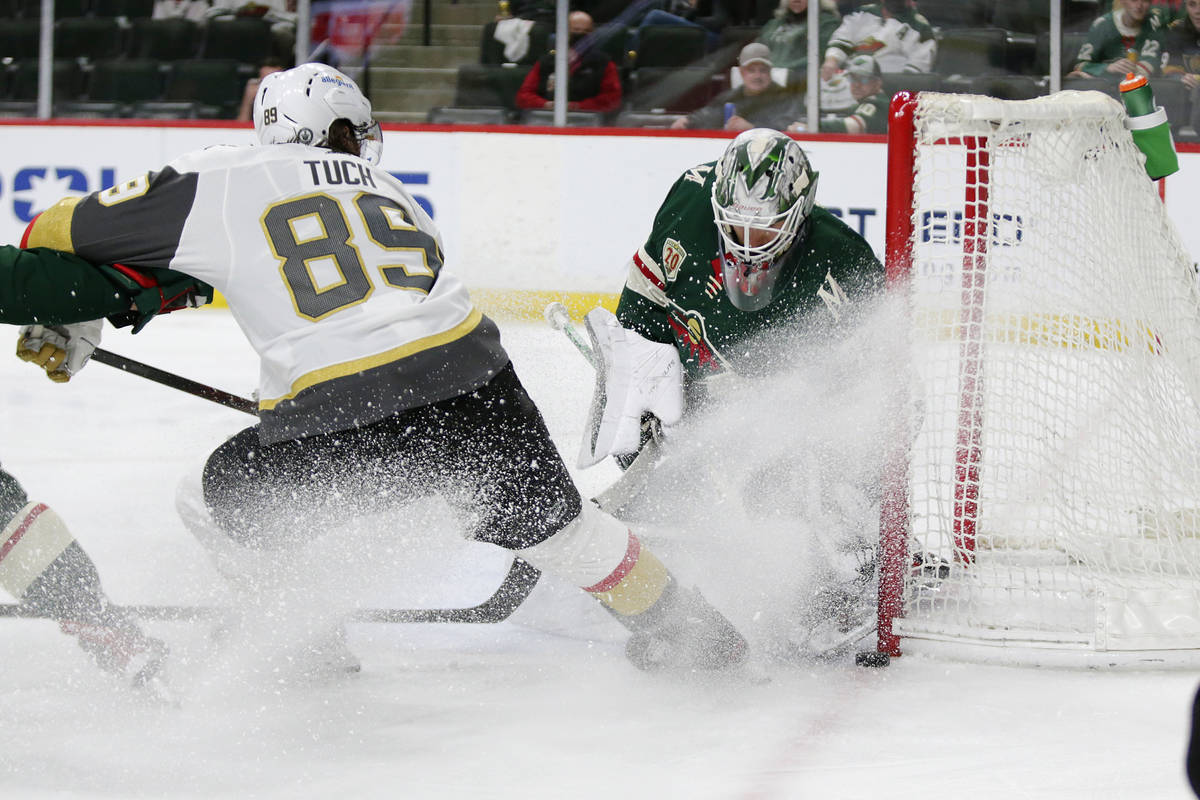 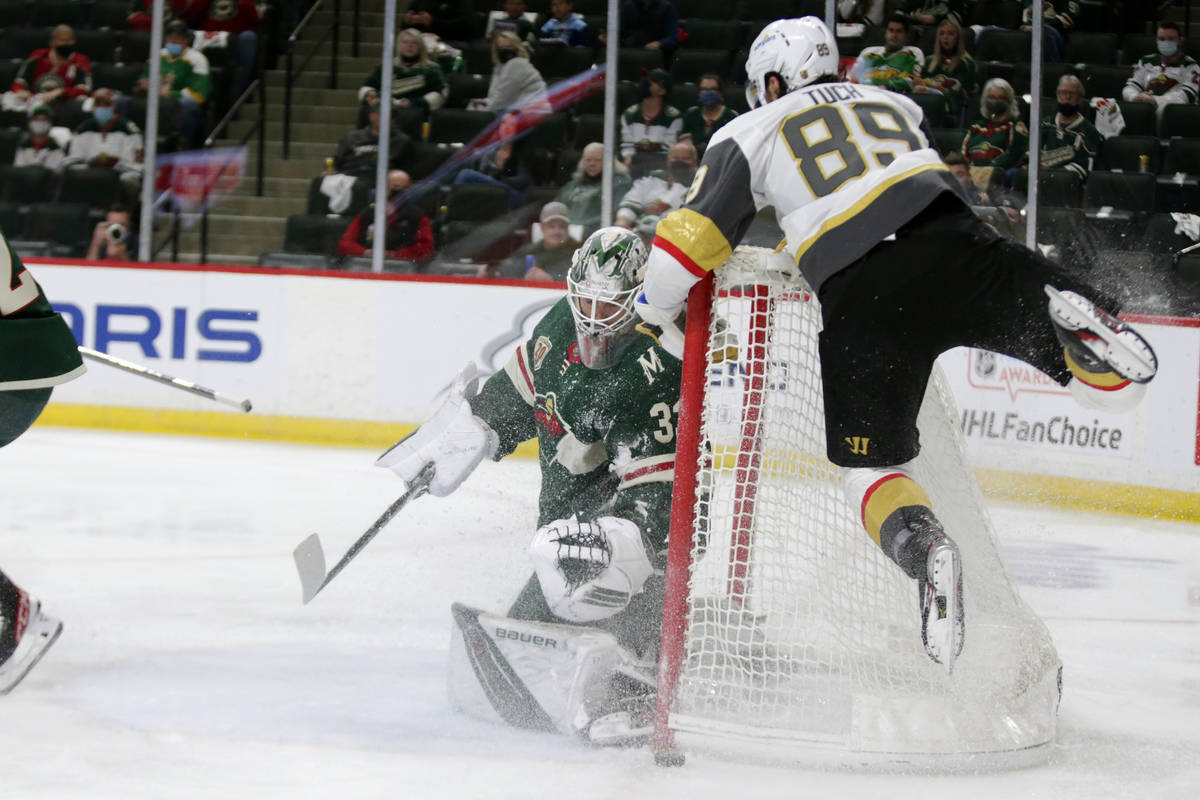 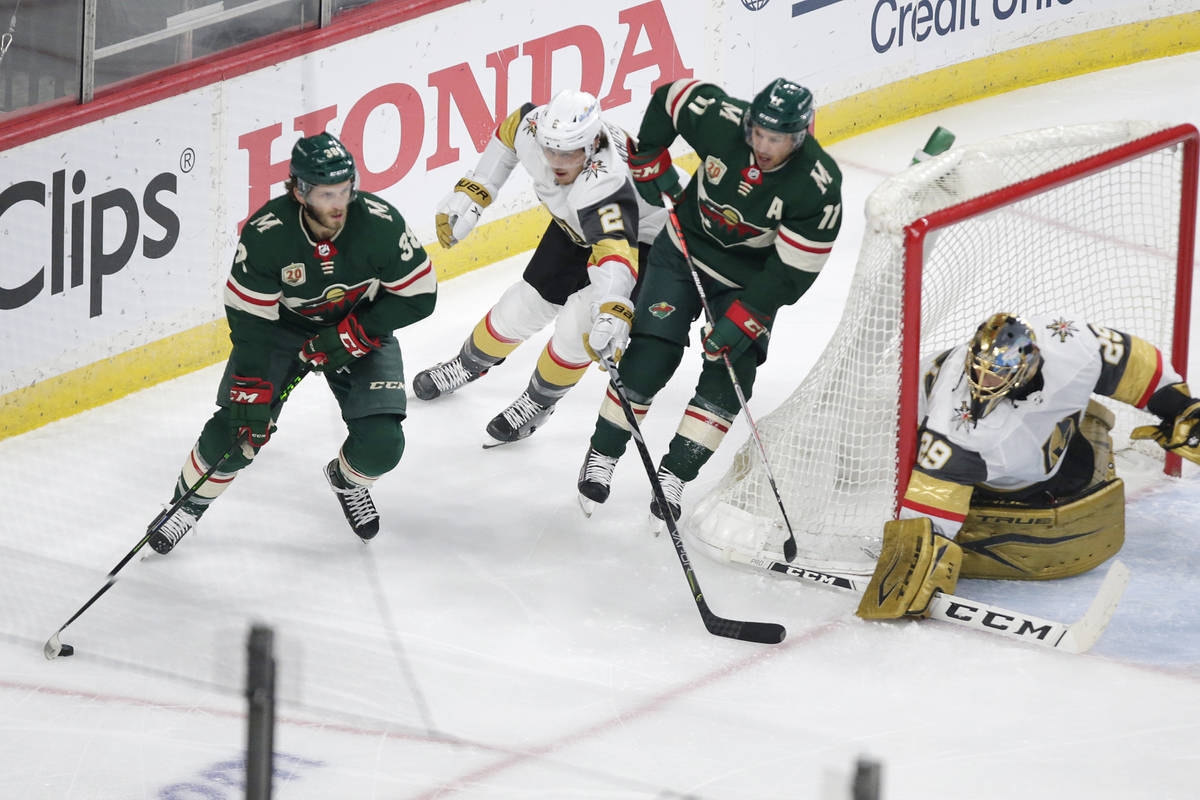 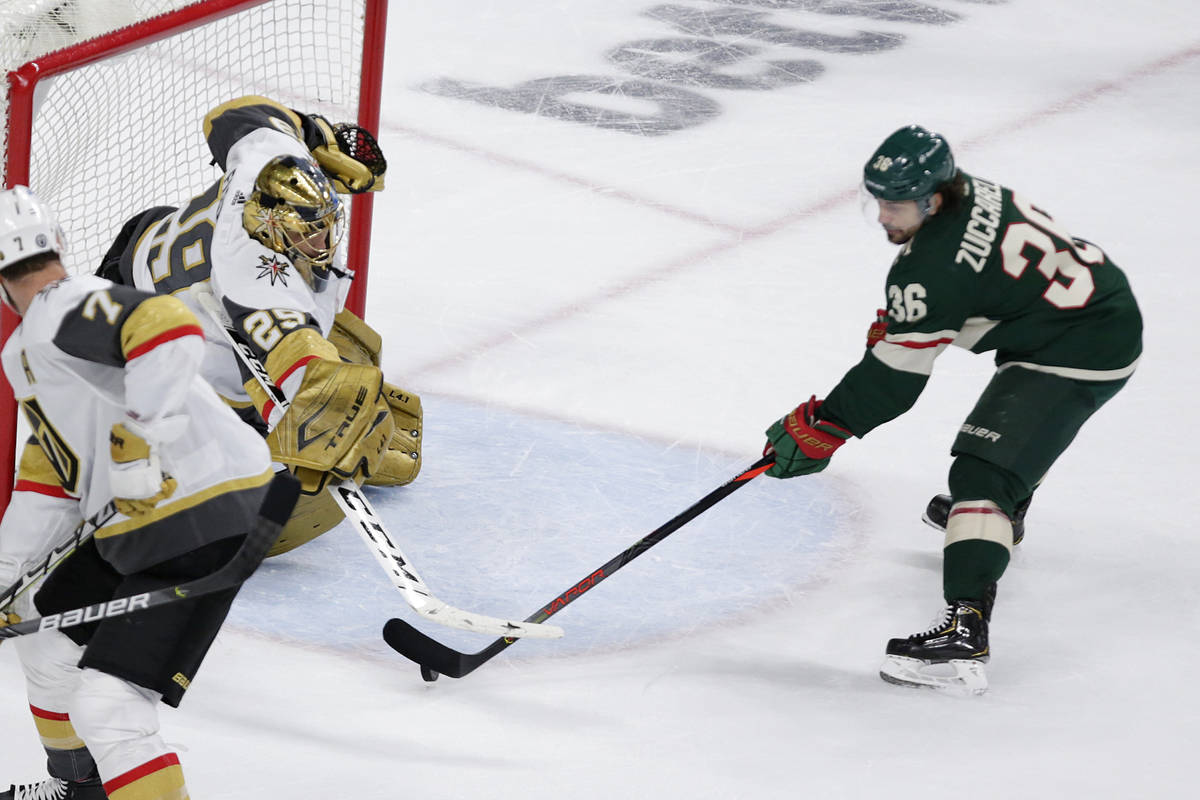 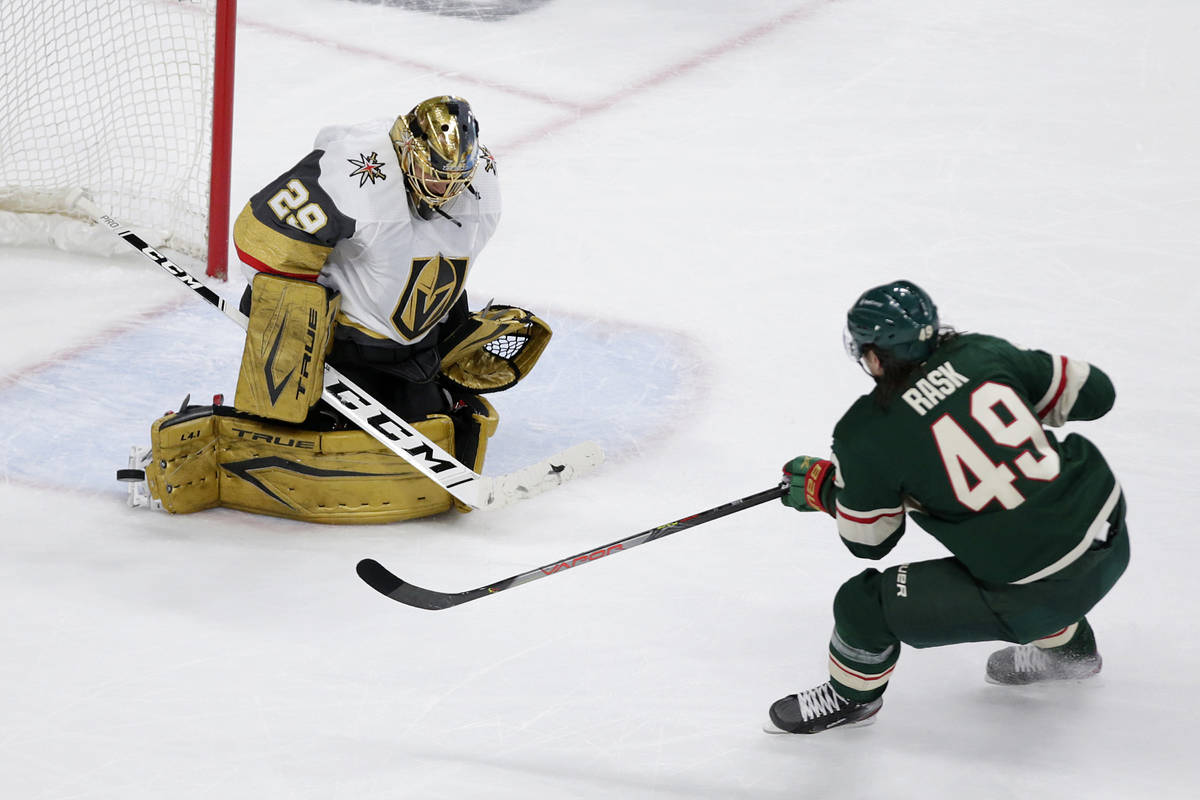 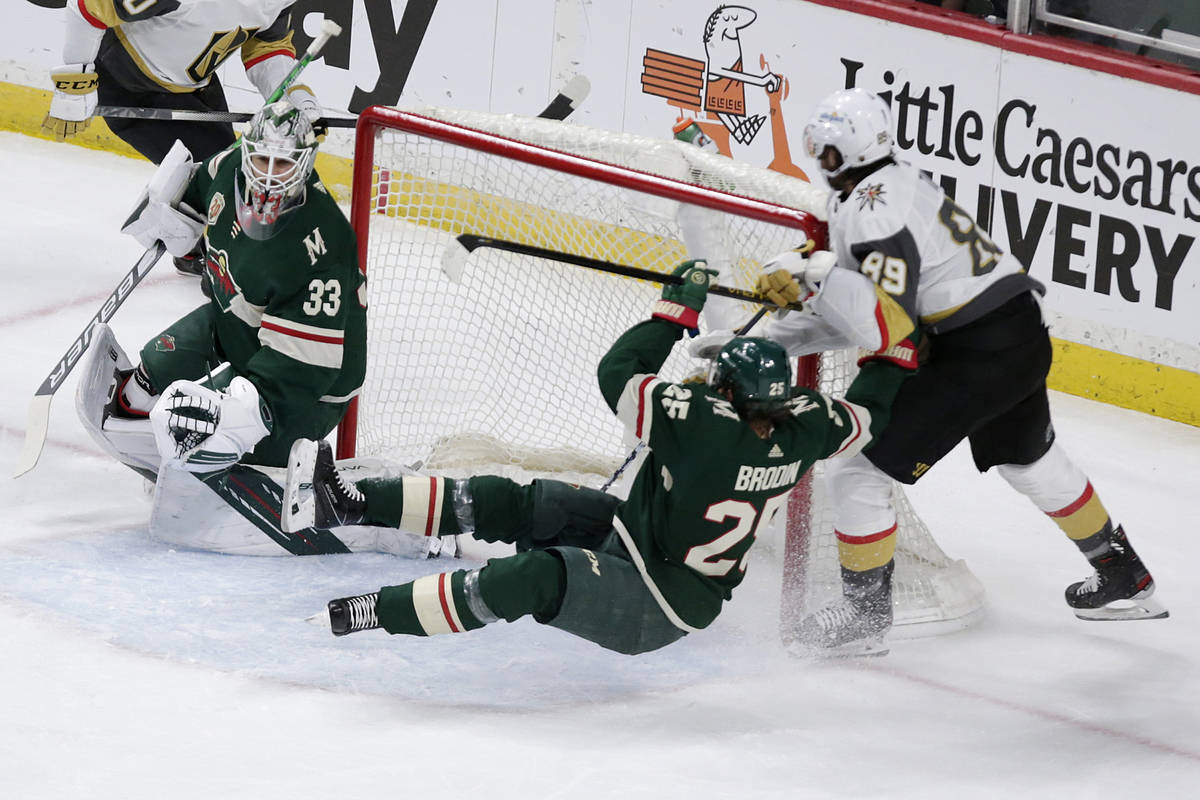 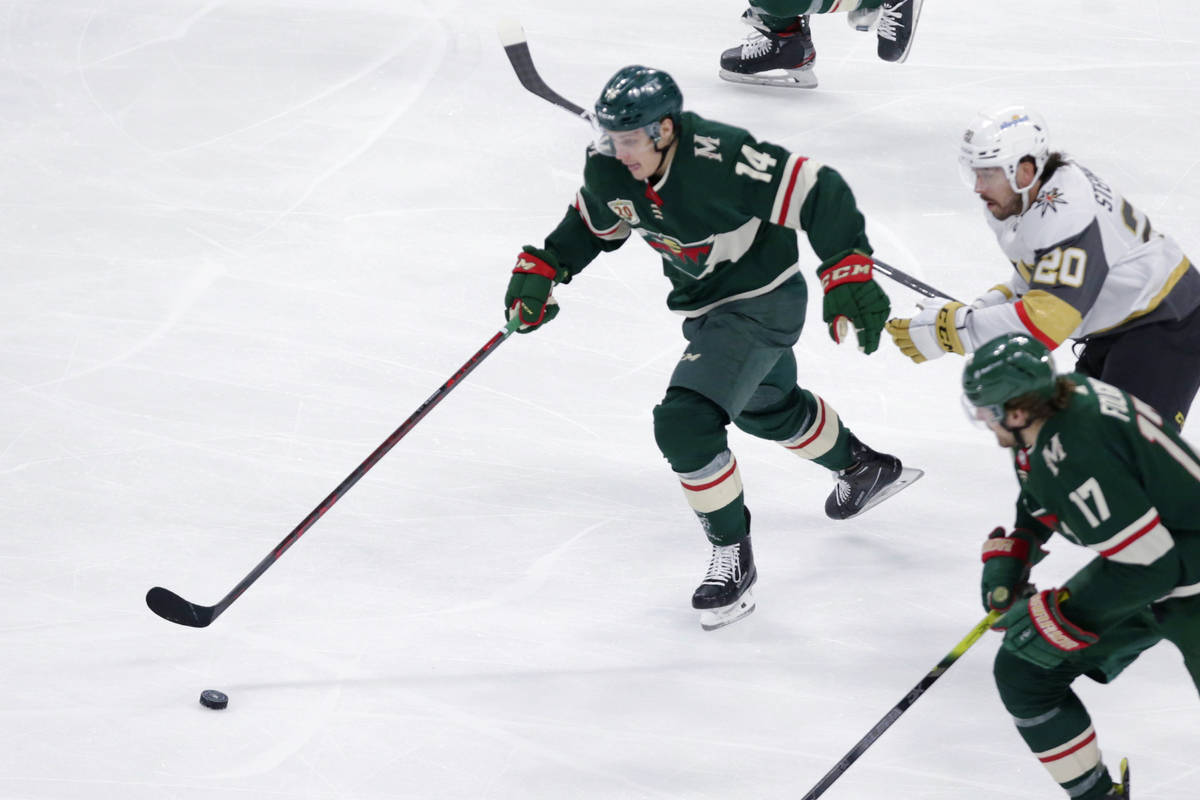 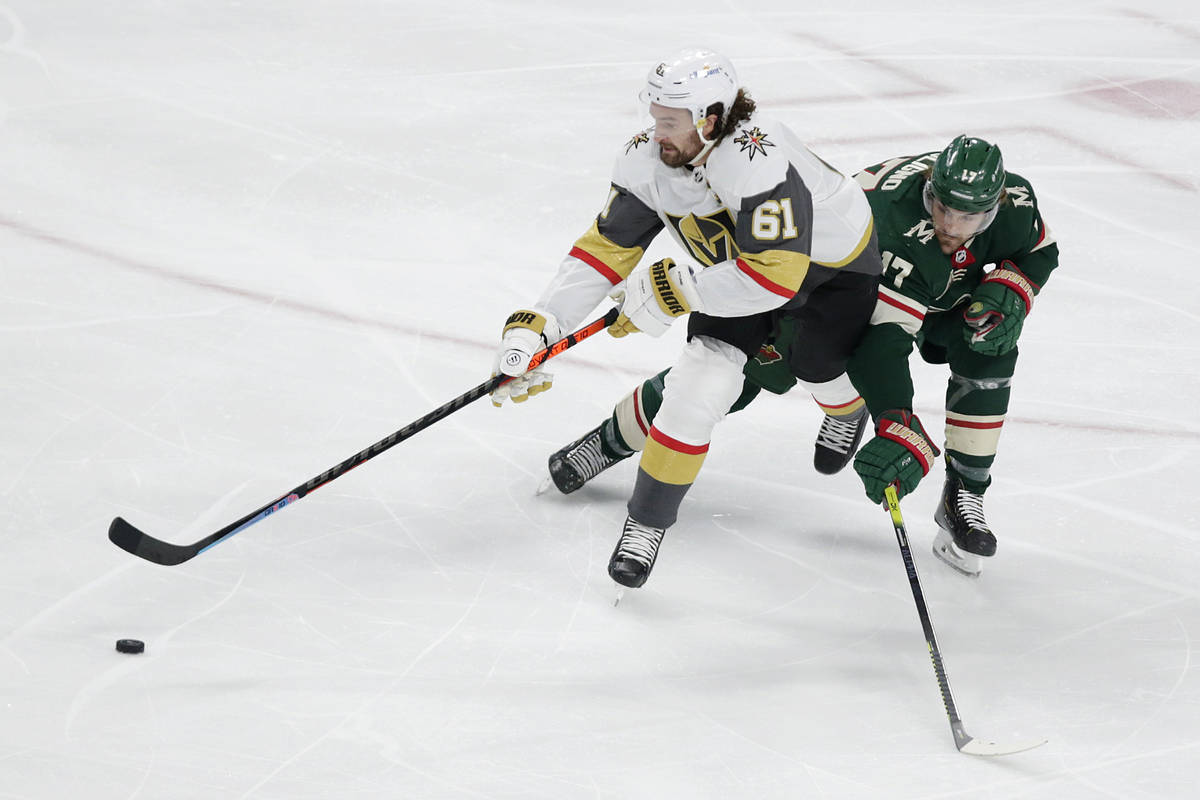 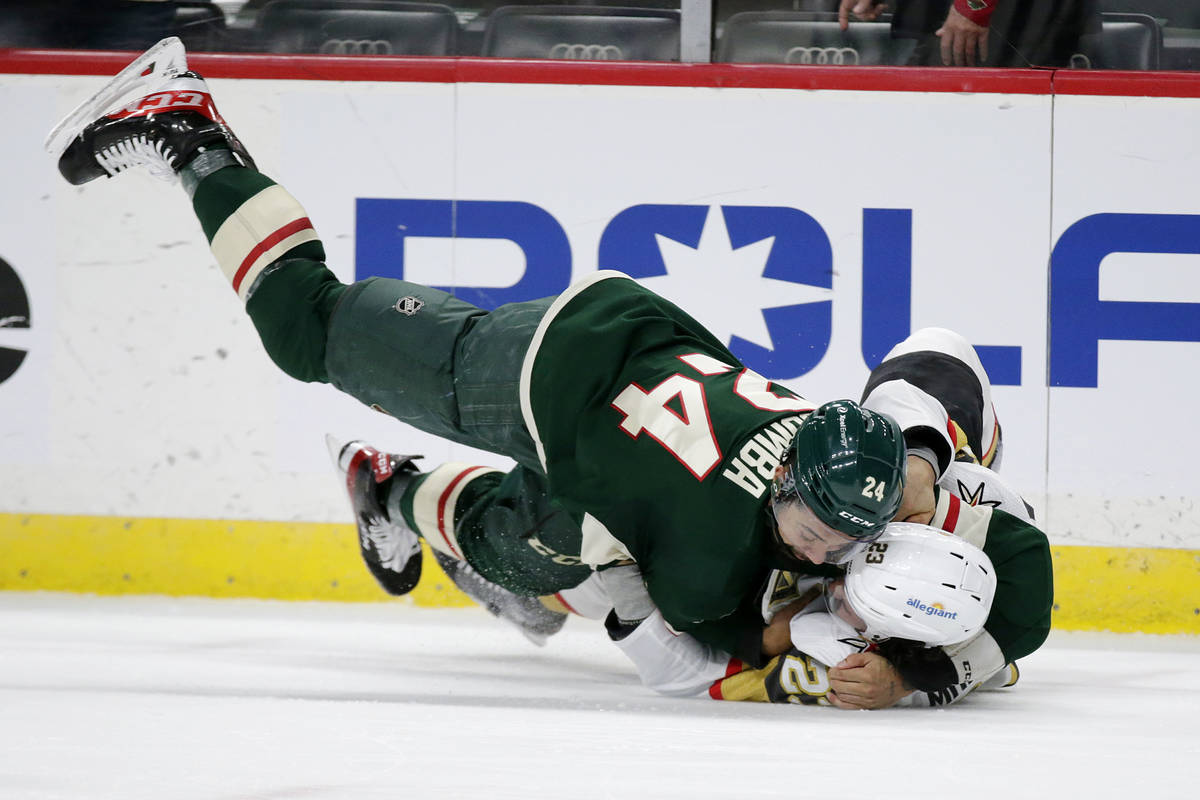 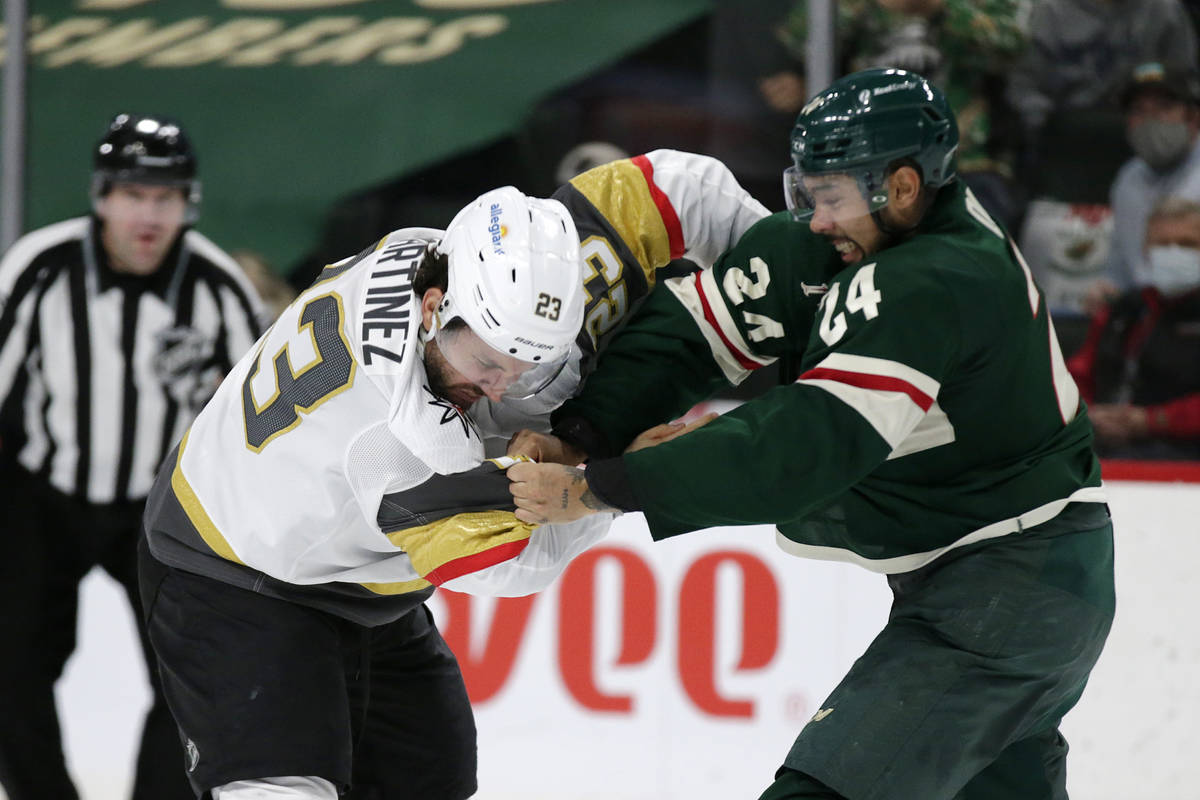 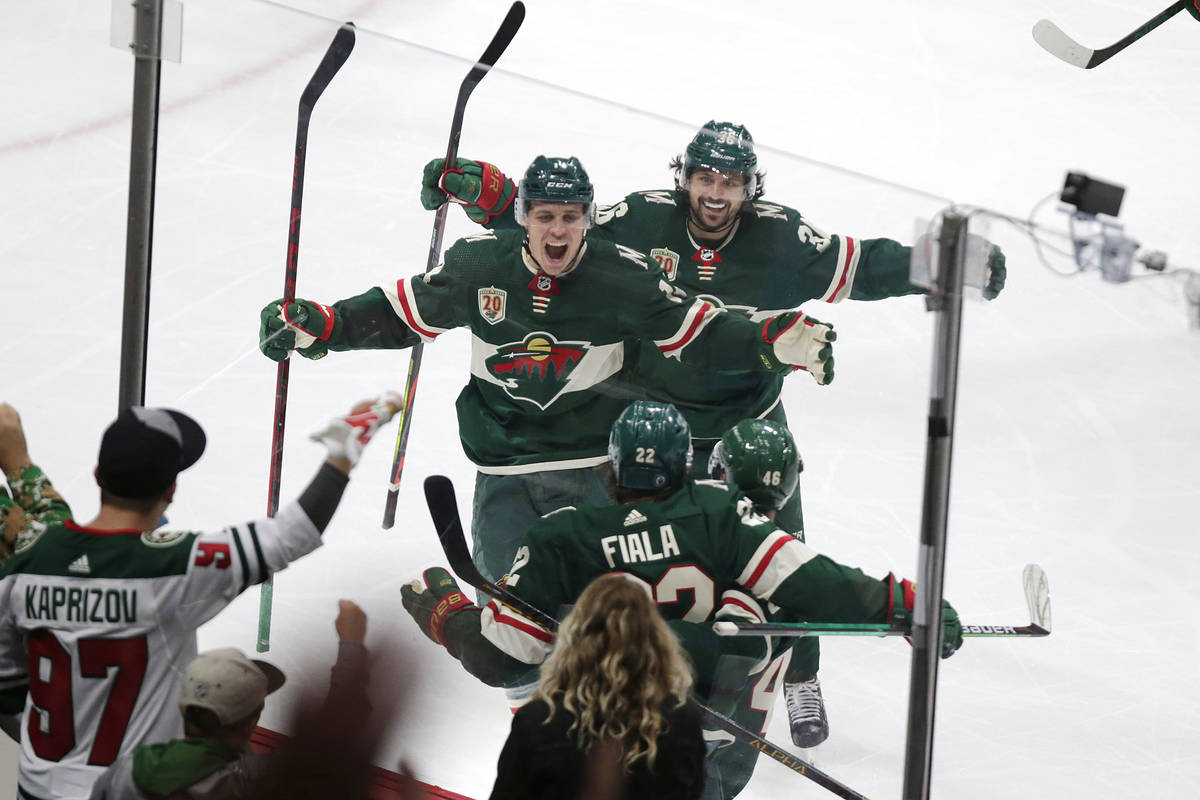 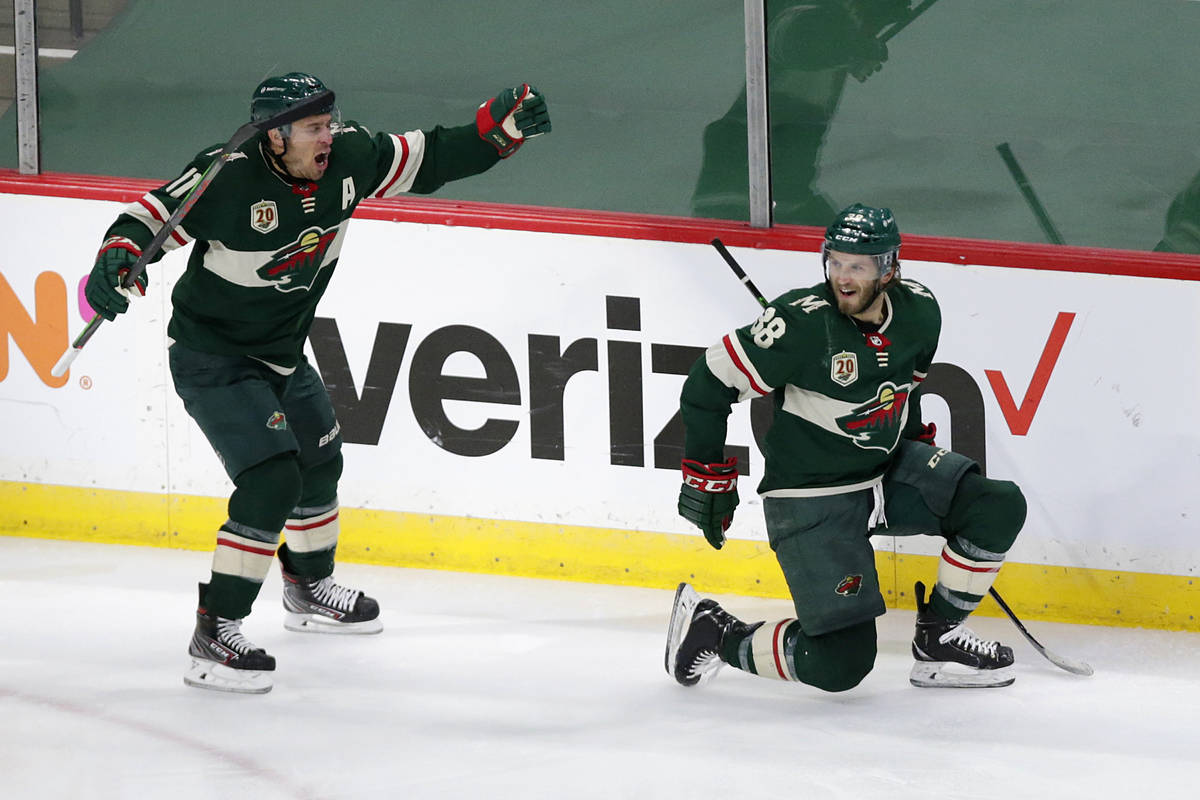 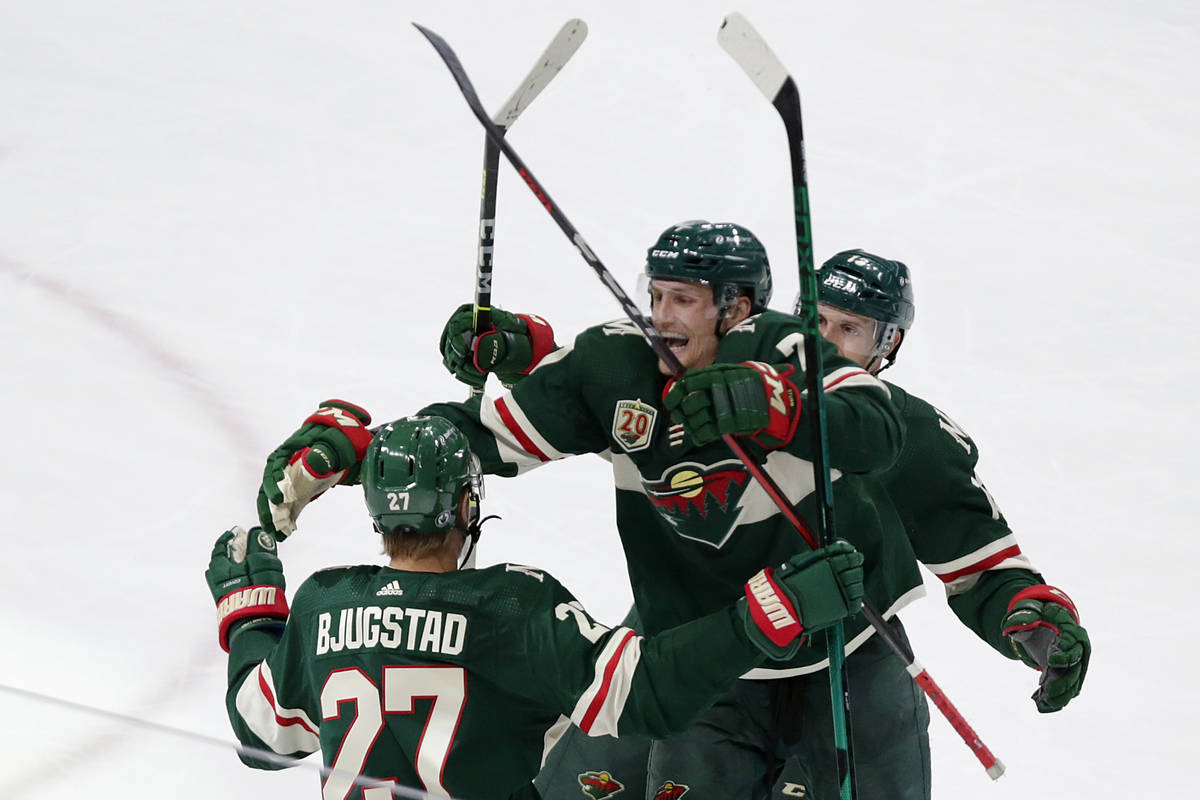 Minnesota Wild center Nick Bjugstad (27) is congratulated by teammates Nico Sturm (7) and Nick Bonino (13) after scoring a goal on the Vegas Golden Knights during the third period in Game 6 of an NHL hockey Stanley Cup first-round playoff series, Wednesday, May 26, 2021, in St. Paul, Minn. The Wild defeated the Golden Knights 3-0. (AP Photo/Andy Clayton-King)

ST. PAUL, Minn. — Alex Tuch stood in place in front of the Minnesota net. Knowing he was bordering on the blue paint, the Golden Knights forward raised his arms as if to declare his innocence on the play.

The officials saw through the tactic and stuck with a pivotal call that went against the Knights.

Chandler Stephenson’s apparent tying goal in the third period was waved off for goaltender interference as the Knights went on to a 3-0 loss to the Wild on Wednesday in Game 6 at Xcel Energy Center.

The best-of-seven West Division first-round playoff series concludes with a deciding game at 6 p.m. Friday at T-Mobile Arena. Colorado awaits the winner in the second round.

“Listen, those have gone our way before,” coach Pete DeBoer said. “We felt it was worth the challenge.”

The Knights missed a second straight opportunity to eliminate the Wild and will play a Game 7 after holding a 3-1 series lead for the third straight postseason.

They are 1-1 in those situations, losing to San Jose in 2019 and beating Vancouver last season in the second round.

The Knights are 2-8 in their past 10 potential series-clinching games, while goaltender Marc-Andre Fleury lost his fifth straight with the Knights with a chance to eliminate an opponent.

“It’s an exciting opportunity,” forward Reilly Smith said. “Our fans are definitely going to be full of energy. They’re going to be really loud, so let’s make the most of it.”

The Knights played without defenseman Brayden McNabb (COVID protocols) and forward Ryan Reaves (undisclosed) in addition to being without forwards Max Pacioretty and Tomas Nosek.

Minnesota led 1-0 in the third period when Stephenson fired a shot from the right-wing boards that slipped past Wild goaltender Cam Talbot.

Tuch was battling with Minnesota defenseman Matt Dumba when the puck sailed into the net with 11:05 remaining.

“(Tuch) was kind of getting held in the crease. Couldn’t really get out of there,” Knights captain Mark Stone said. “It’s gone both ways. Can’t argue it anymore. It is what it is.”

The Knights benefited from successful coach’s challenges during their road victories in Games 3 and 4 but were on the wrong side of this one.

The Knights believed Dumba pinned Tuch in the crease and didn’t allow him to exit the blue paint. According to DeBoer, officials thought Tuch didn’t make enough of an effort to leave the crease before the goal being scored.

“I guess what goes around comes around, right?” Wild coach Dean Evason said.

Minnesota capitalized on the ensuing power play, as Kevin Fiala’s shot sneaked past Marc-Andre Fleury for his first goal of the series.

Nick Bjugstad added a late breakaway goal for the Wild, who broke a scoreless tie at 4:21 of the third when Ryan Hartman converted on a two-on-one.

Talbot finished with 23 saves for his second shutout in the series.

“We had some chances. I don’t think there was a ton of high-dangers each way,” Stone said. “We had a chance to win the hockey game. We just didn’t play well (enough) in the third to win.”

With so much at stake, both teams played close to the vest in the first period and made simple plays with the puck to avoid any mistakes. The result was a quiet 20 minutes with more icings (six) than scoring chances combined (five), according to NaturalStatTrick.com.

Fleury finished with nine stops in the period, best coming in the final minute after Victor Rask was sent in alone.

The tight-checking style continued into the second period, with little space to create with the puck.

William Karlsson had the best chance for the Knights about 6:30 in when he pounced on a loose puck in traffic and sent a shot off the crossbar.

But most of the action in the period was courtesy of the Wild’s physical play.

Marcus Foligno drove defenseman Zach Whitecloud through the glass with 12:10 remaining in the period, causing a brief delay when the pane came loose and had to be repaired.

About five minutes later, Dumba delivered a huge open-ice hit to Tuch that Alec Martinez didn’t like. He challenged Dumba to a fight and was wrestled to the ice, while Dumba waved his arms to the crowd on his way to the penalty box.