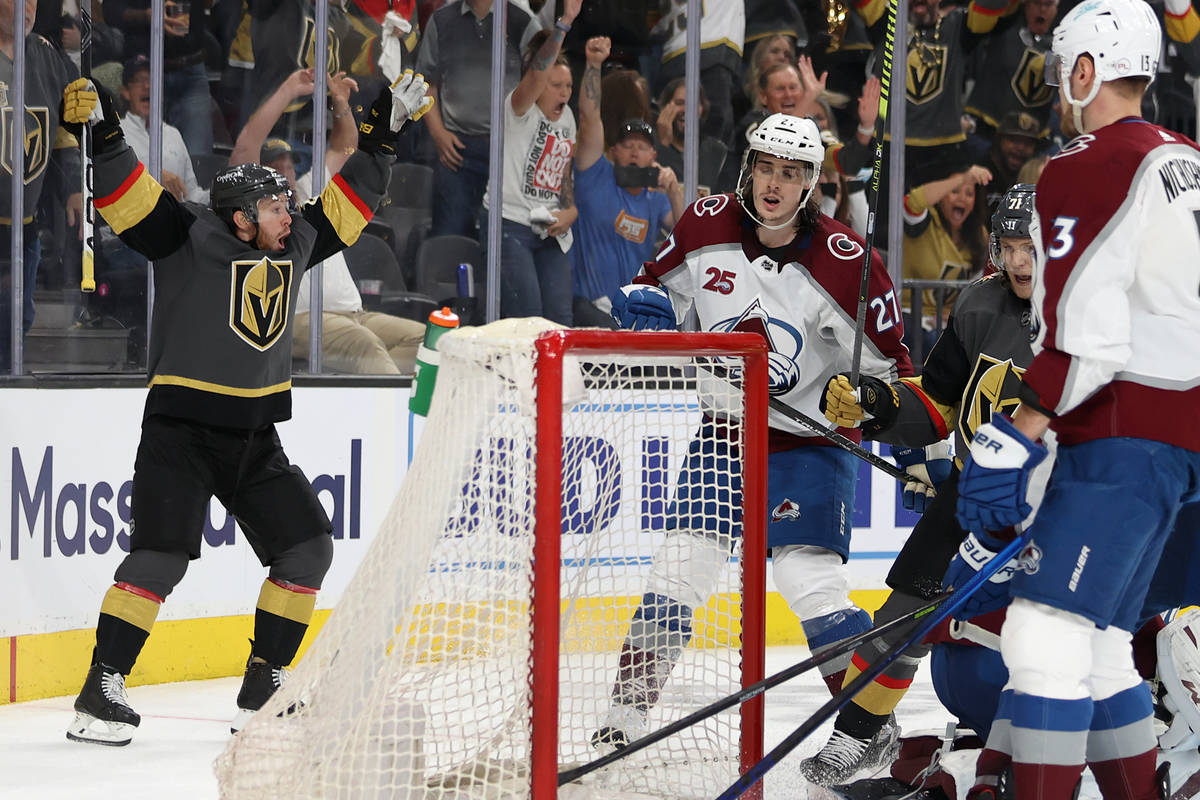 Jonathan Marchessault’s bank shot off the back of Avalanche goalie Philipp Grubauer for the tying goal in Game 3 felt like a significant moment for the Golden Knights in the West Division final when it happened.

It turned out to be the turning point in the series against Colorado.

Along with Max Pacioretty’s go-ahead goal 45 seconds later, Marchessault’s effort started the Knights down the comeback trail. They went on to win four straight and eliminated the favored Avalanche with a 6-3 victory on Thursday in Game 6 at T-Mobile Arena.

Despite taking it on the chin in the opener and being backed against the ropes at various points in the best-of-seven series, the Knights’ postseason know-how was enough to overcome the high-end talent of the Presidents’ Trophy winner.

“I think we saw firsthand the importance of character, leadership, maturity, resilience, determination, all those traits that really carry the day at this time of year when you’re talking about teams that all have lots of good players,” general manager Kelly McCrimmon said Friday.

The Knights leaned on their experience to get past Minnesota in seven games during the first round and didn’t panic when they trailed 2-0 in the series against Colorado.

Marchessault and Pacioretty came through in the final 5:18 of the third period in Game 3 to prevent the Knights from falling to a 3-0 series hole that probably would have been too much to overcome.

And they maintained their poise on the road in Game 5 despite trailing 2-0 and getting pulverized in the second period. Alex Tuch put the Knights in striking distance early in the third period and Marchessault tied the score with yet another timely goal late in the third before Mark Stone won it in overtime.

“There’s different challenges that you need to face at playoff time to be battle tested and hardened up for the challenges that undoubtedly you’re going to face as you go along,” McCrimmon said. “There’s things that we did differently this year based on what happened to us in the playoffs last year that were implemented over the course of the season that I think helped us when we played Minnesota this year. Those are things that you have to pick up as you go through playoffs.”

The series against Colorado was the opposite of last year’s Western Conference Final against Dallas in the bubble when the Knights gripped their sticks too tightly in close games and every mistake ended up in the back of their net.

The Knights held an edge over the Avalanche in experience with Stanley Cup winners Marc-Andre Fleury, Alec Martinez, Alex Pietrangelo and Chandler Stephenson as members of the core. Several more players were part of the run to the Stanley Cup Final during the inaugural season, and trade deadline acquisition Mattias Janmark played in the final last season with Dallas.

Outside of forward Andre Burakovsky and Brandon Saad, Colorado is still learning what it takes to win in the playoffs and will spend the offseason searching for ways to get over the hump.

“We think we know what a championship team needs to look like, what’s required,” McCrimmon said. “It’s involved making hard decisions along the way, which again, aren’t easy. If we just did what was easy, we wouldn’t be sitting here today having beaten the Colorado Avalanche.”