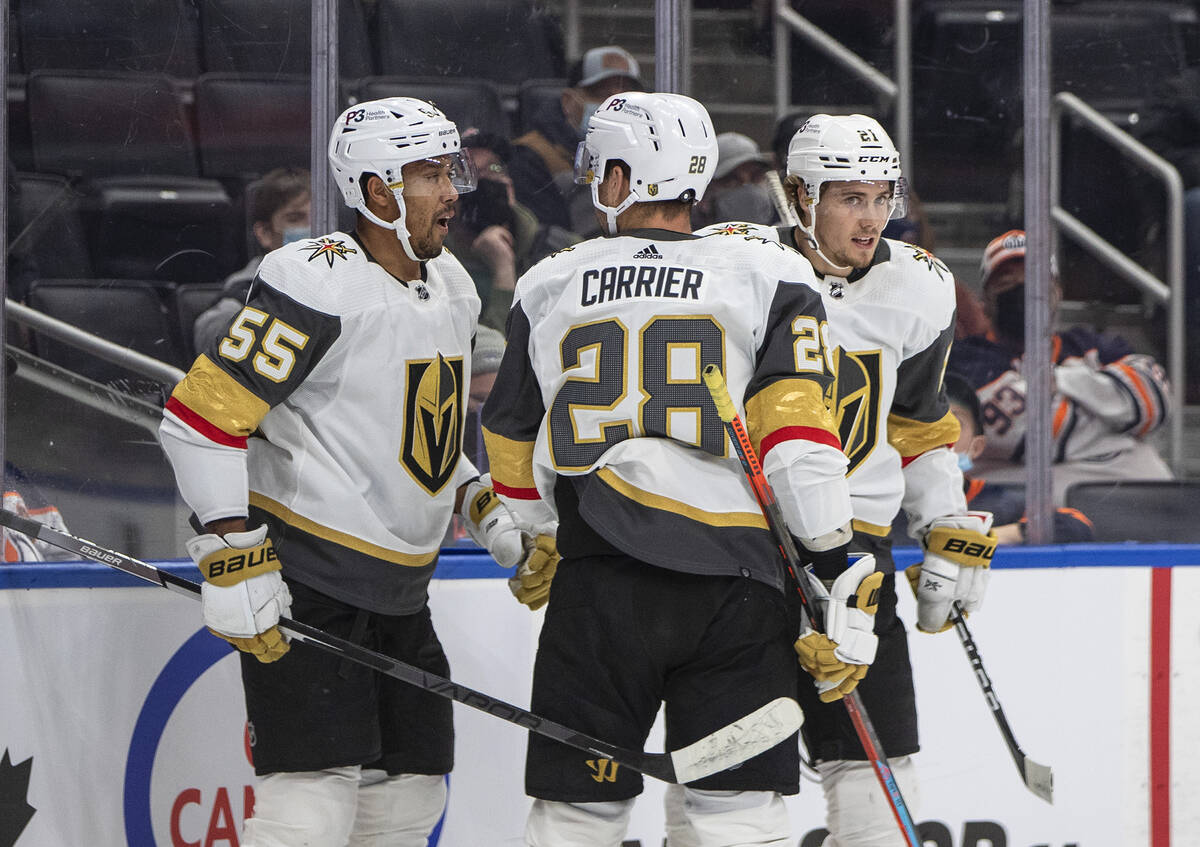 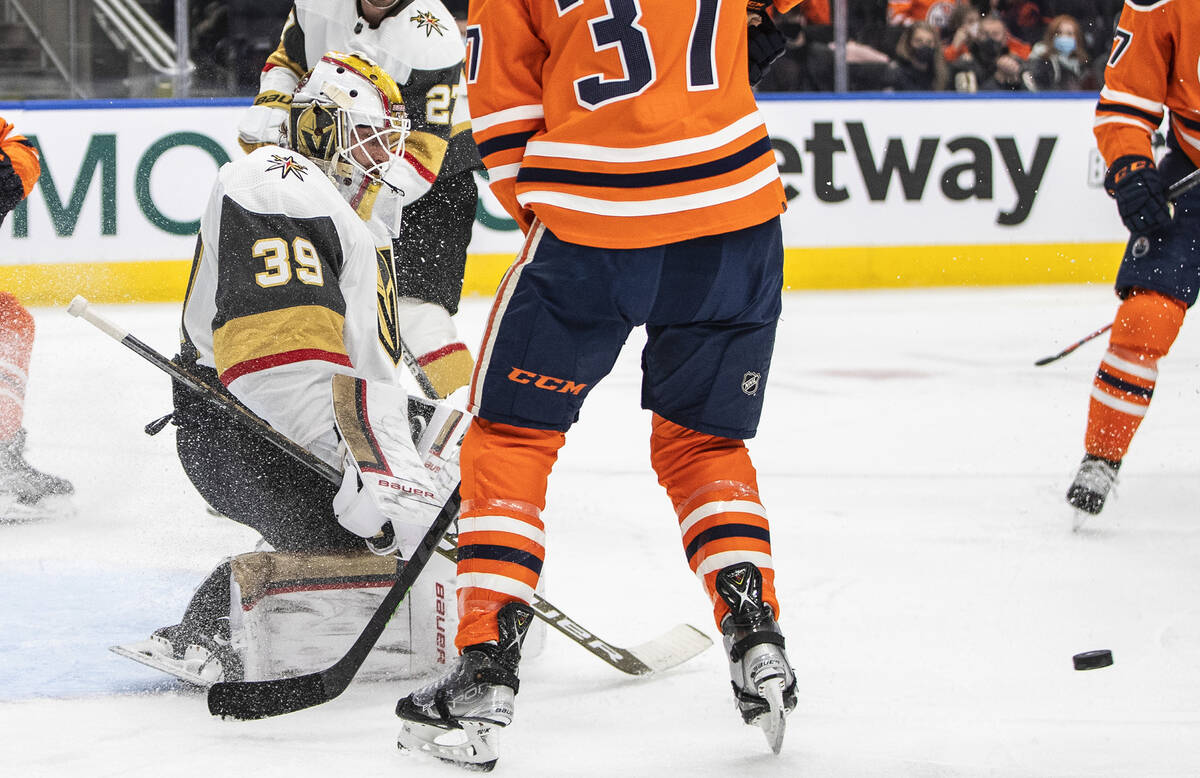 Vegas Golden Knights goalie Laurent Brossoit (39) makes a save against the Edmonton Oilers during the second period of an NHL hockey game Tuesday, Feb. 8, 2022, 2022 in Edmonton, Alberta. (Jason Franson/The Canadian Press via AP) 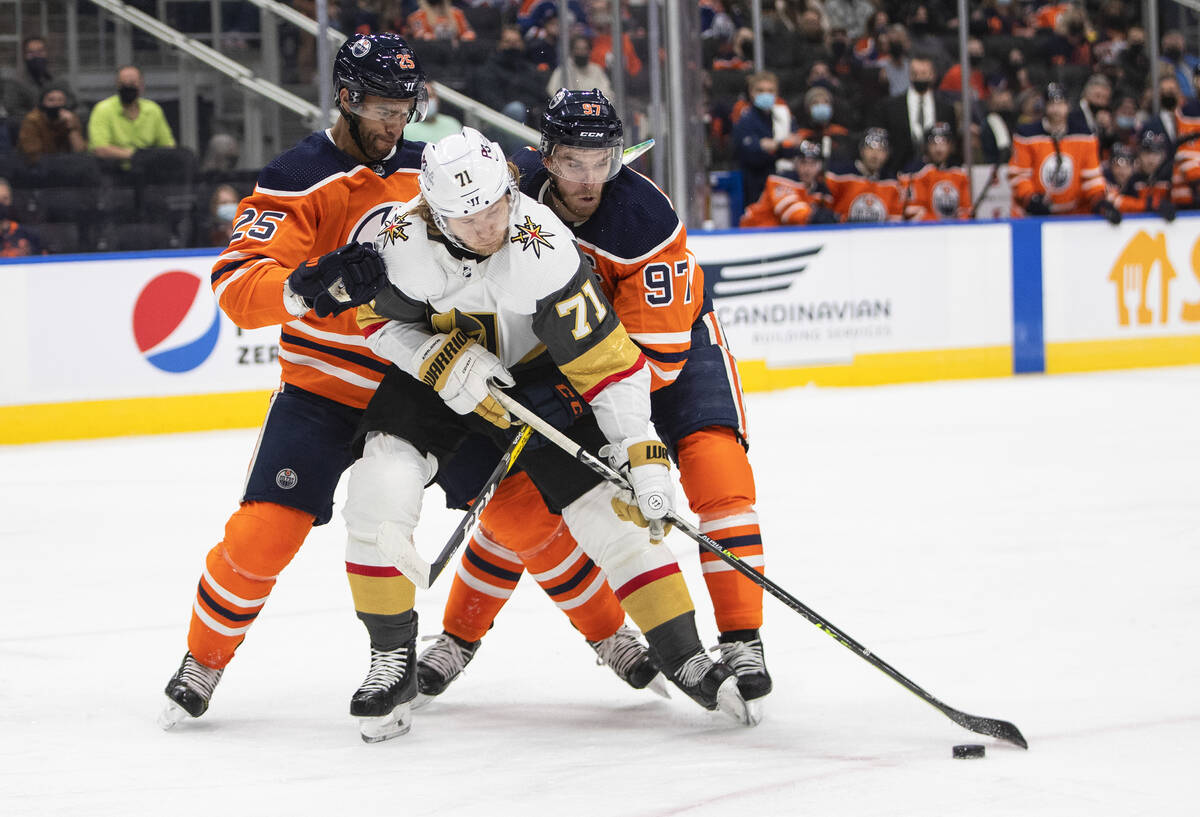 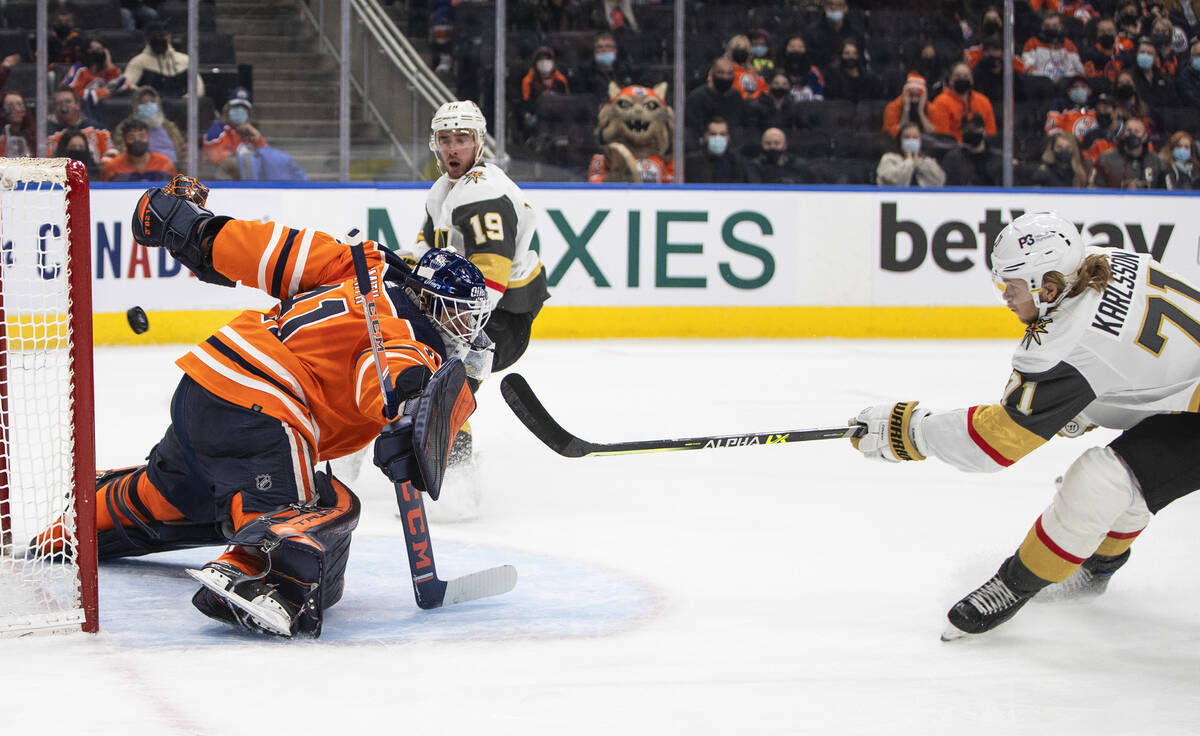 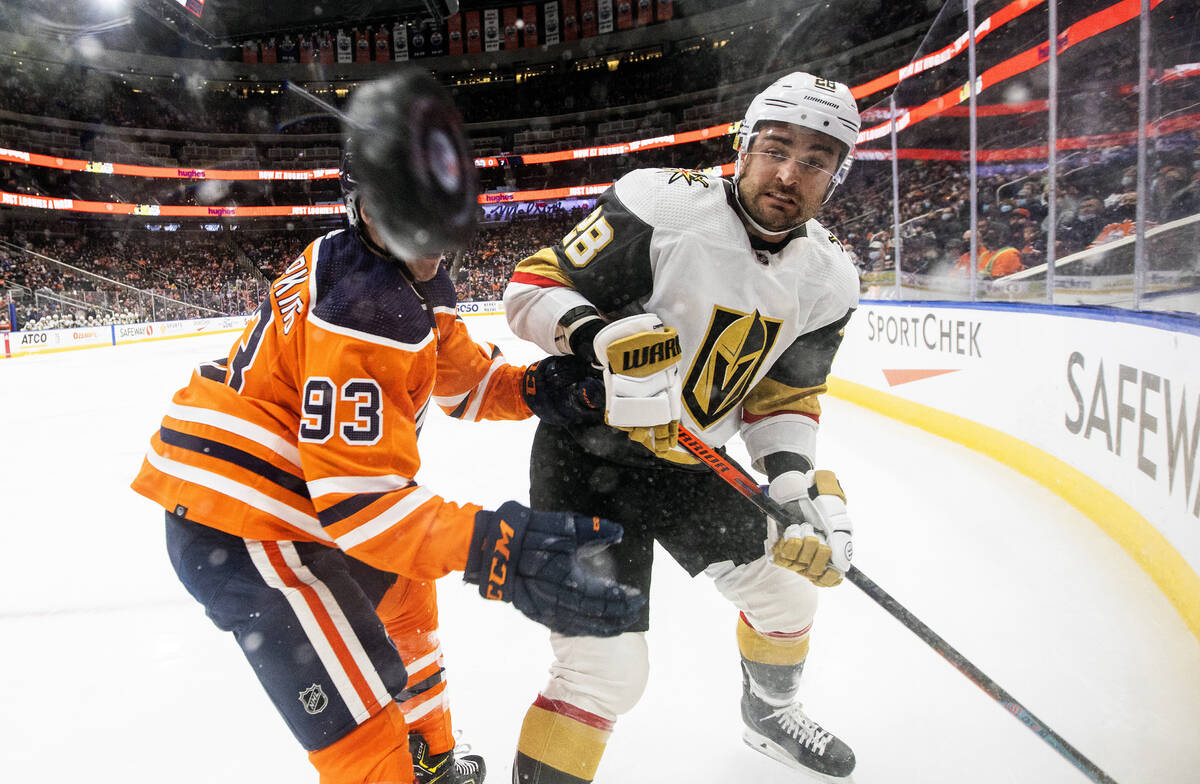 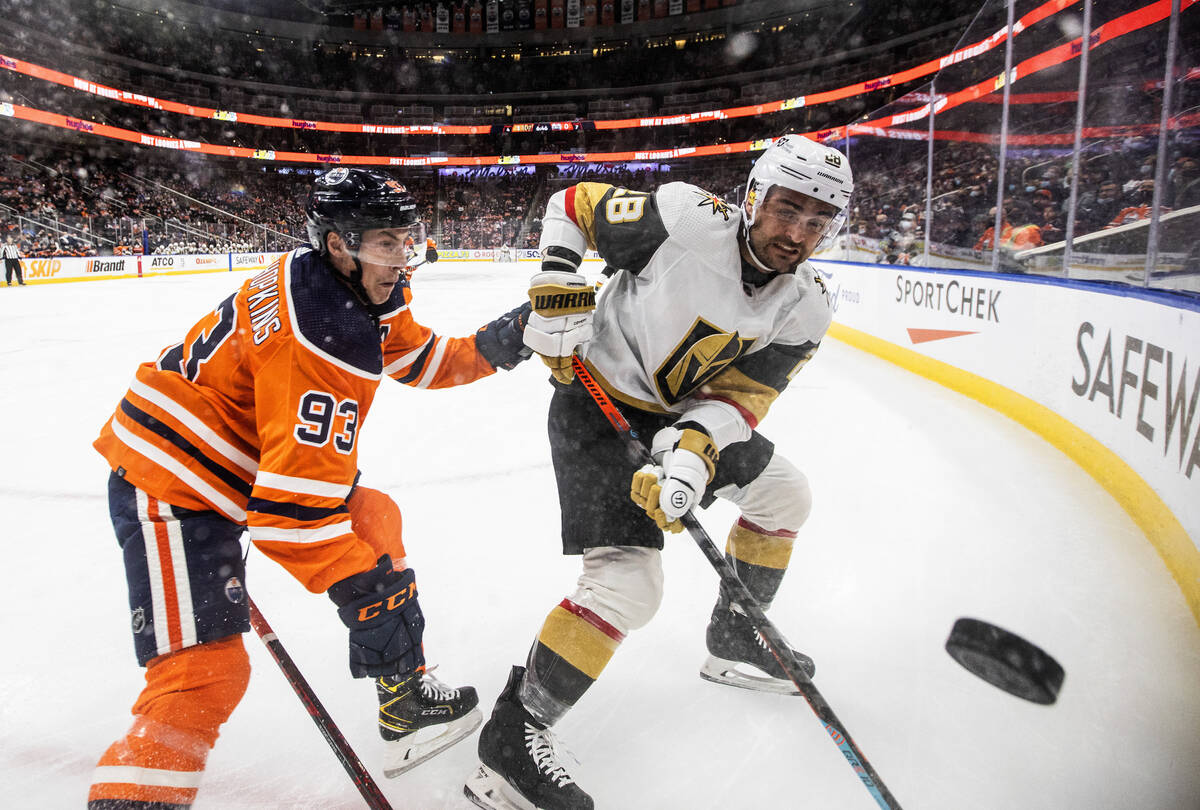 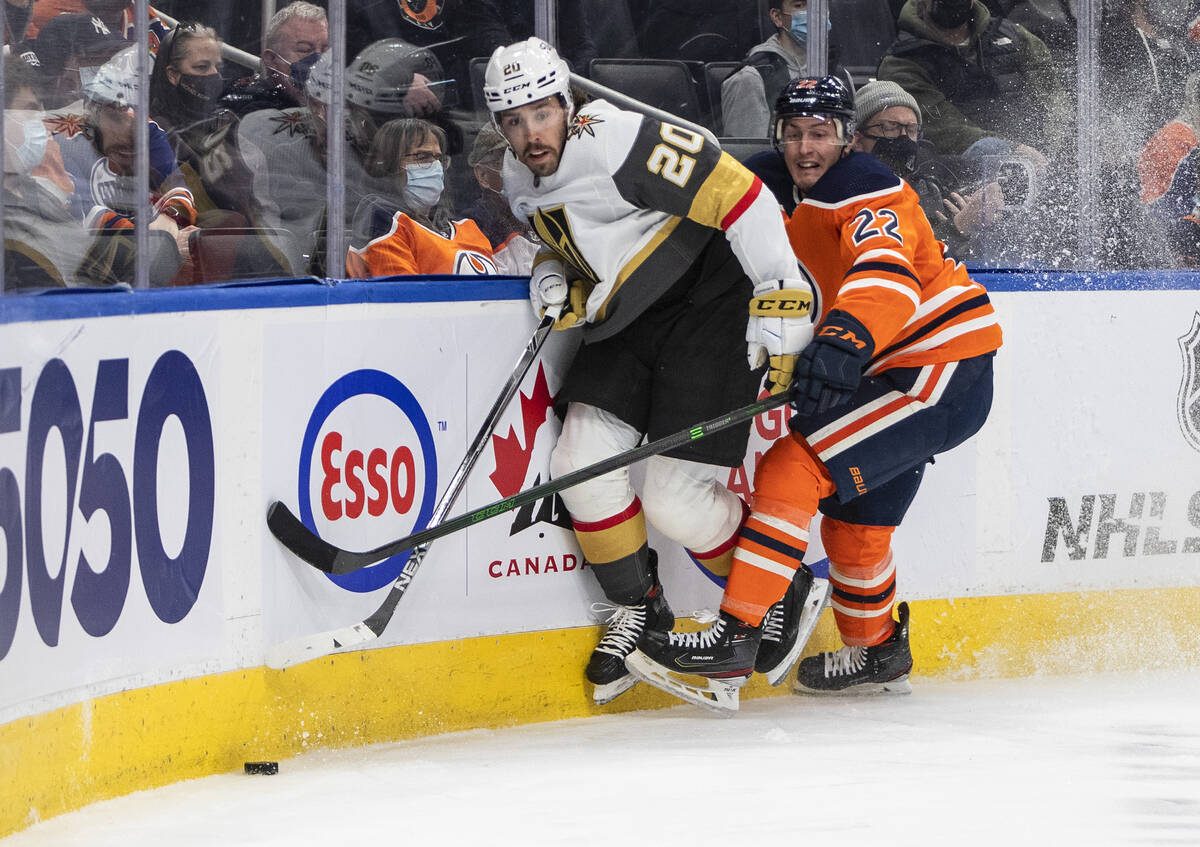 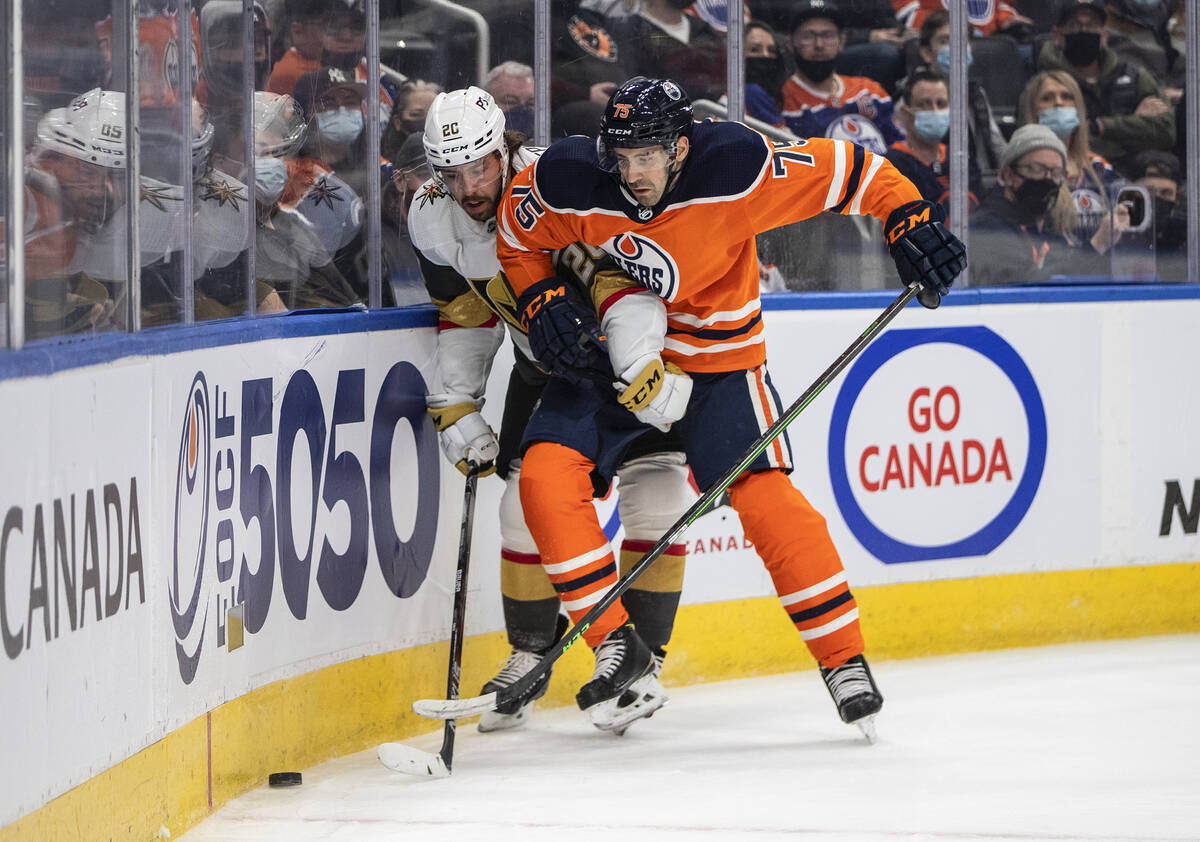 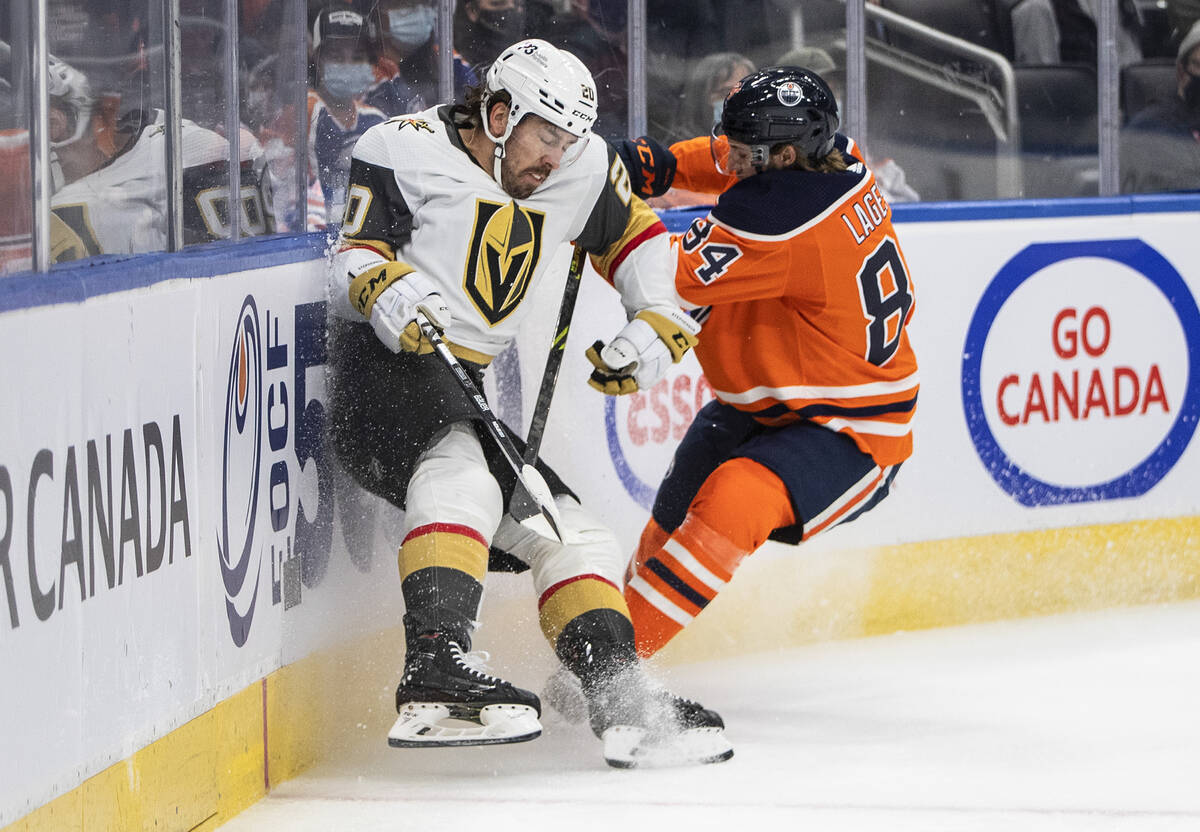 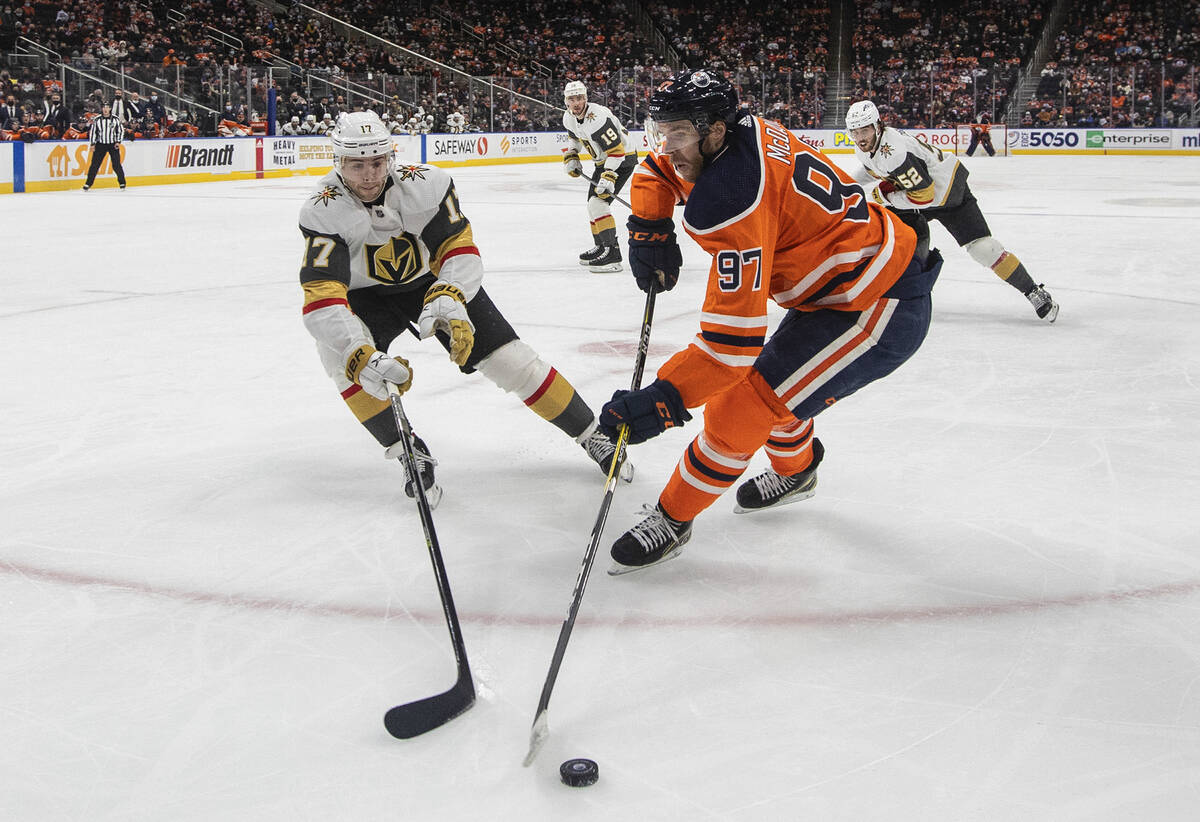 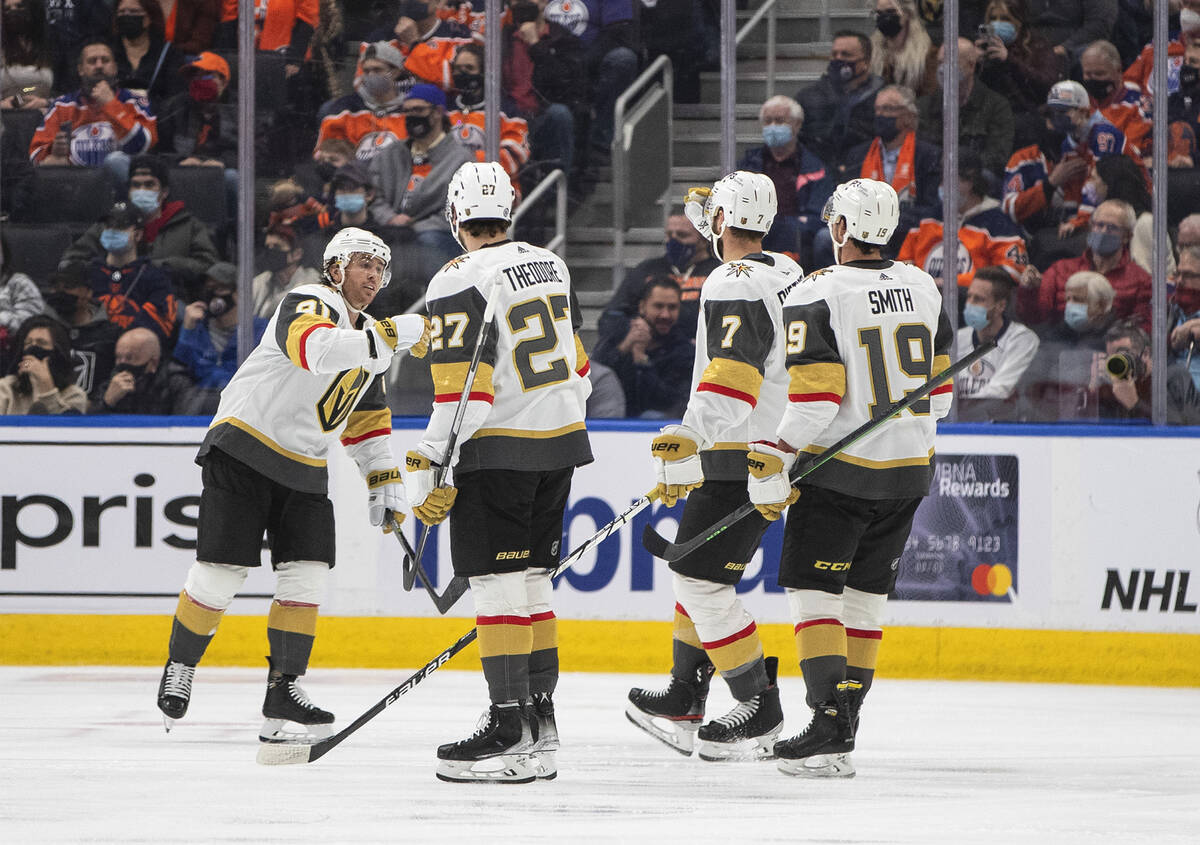 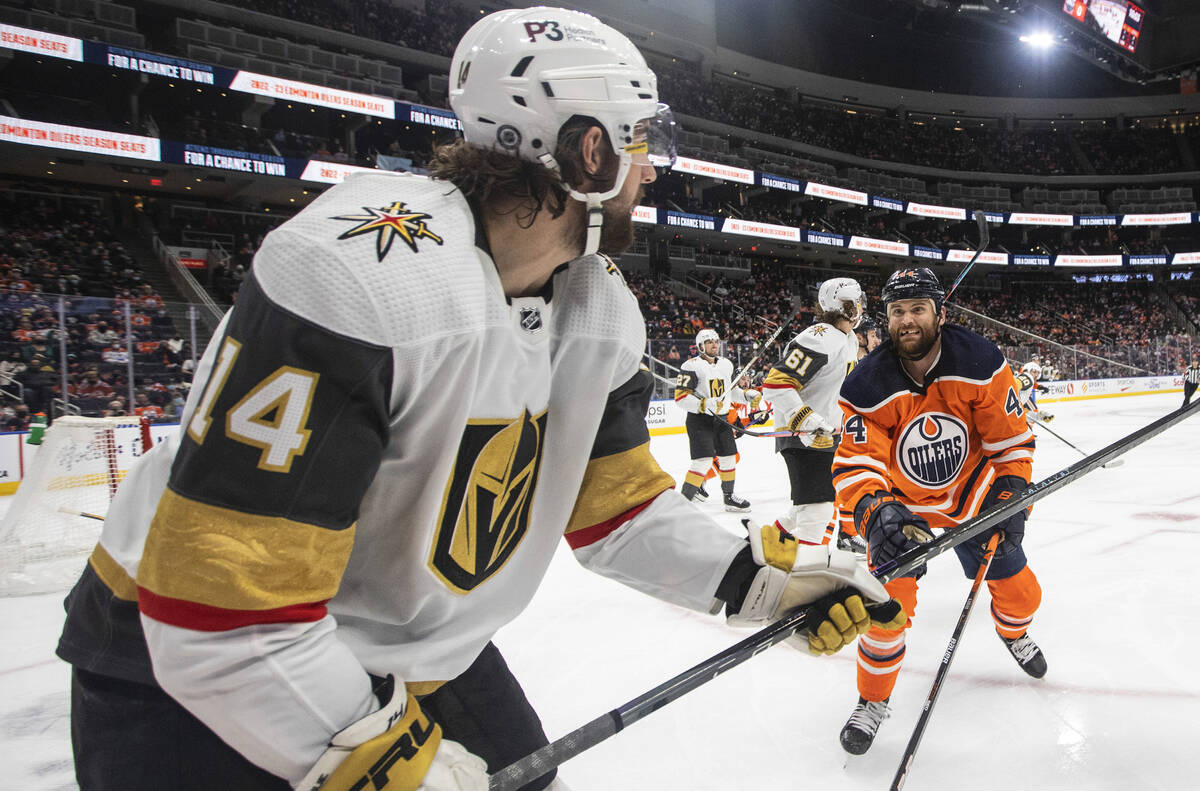 Vegas Golden Knights' Nicolas Hague (14) gets rid of the puck as Edmonton Oilers' Zack Kassian (44) comes in for a hit during the second period of an NHL hockey game Tuesday, Feb. 8, 2022, 2022 in Edmonton, Alberta. (Jason Franson/The Canadian Press via AP) 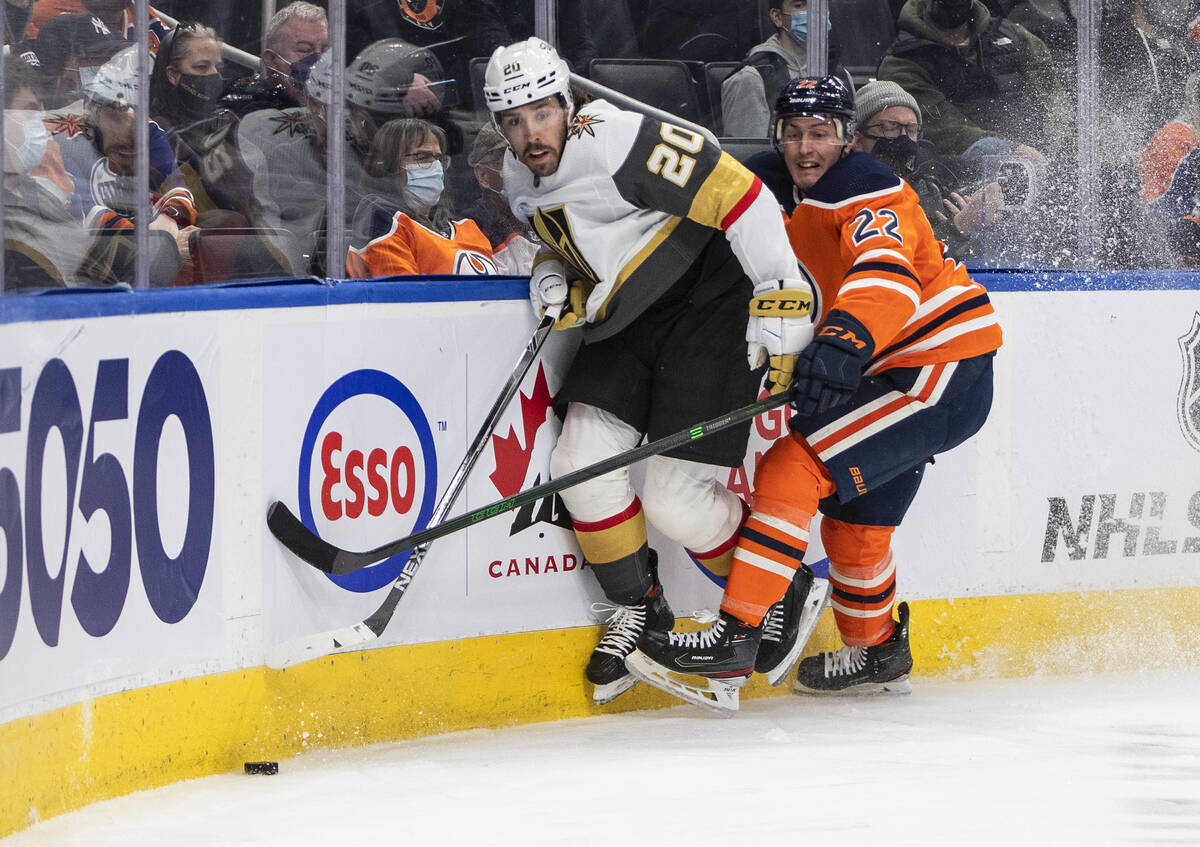 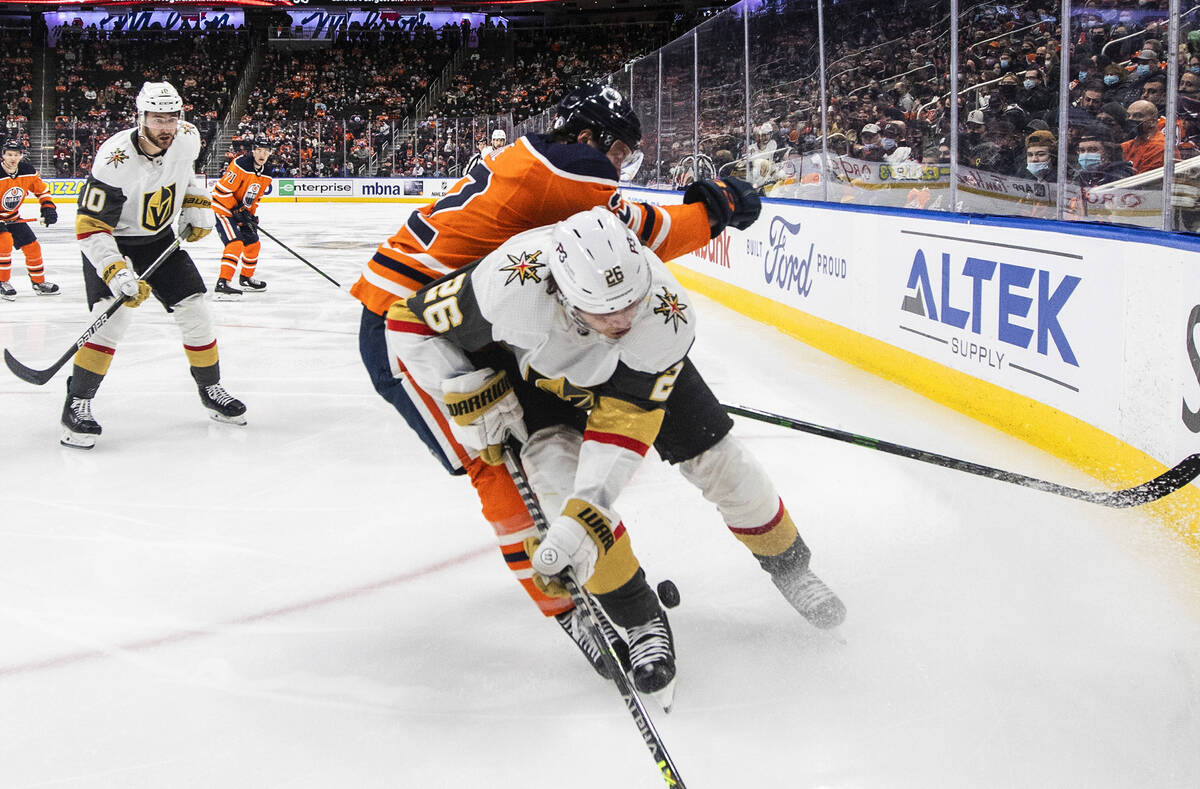 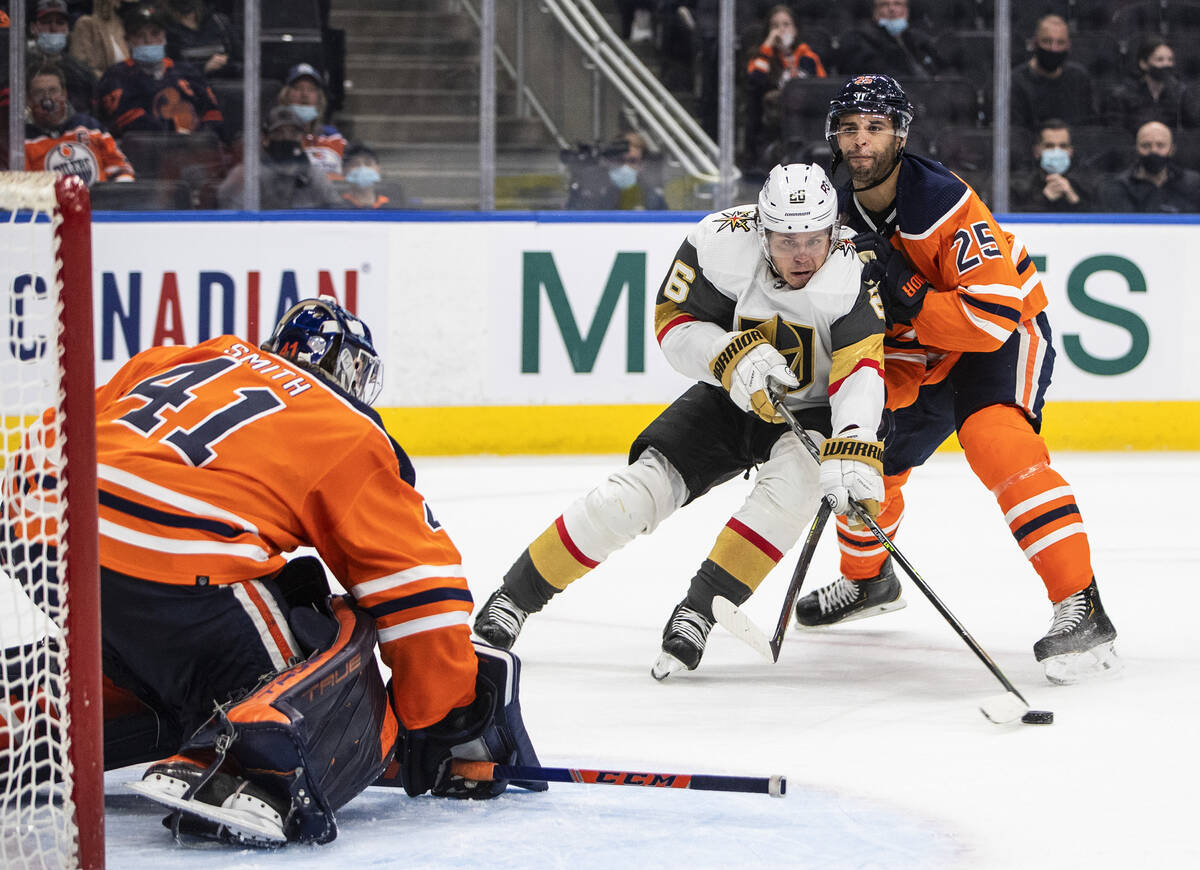 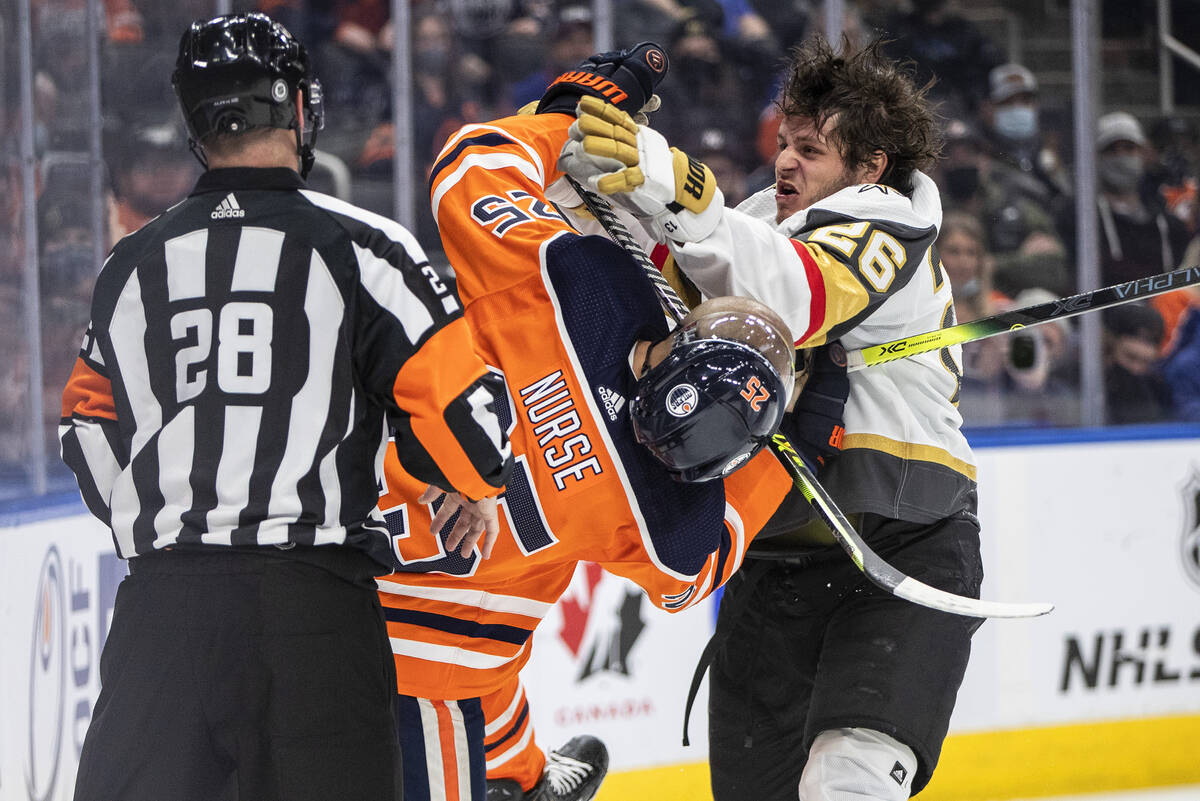 Golden Knights defenseman Brayden McNabb put Connor McDavid in his sights early in the first period and clipped Edmonton’s star as he went by.

Not long after, McNabb aggressively stepped up in the neutral zone to take the puck away from the speedy McDavid before he could hit fifth gear.

The Knights made life difficult for McDavid and his teammates and came away with a 4-0 victory over the Oilers on Tuesday night at Rogers Place in Edmonton, Alberta.

“Our detail was real good.”

The Knights shook off a bit of rust in their first game after the All-Star break to win for the ninth time in their past 11 road games (9-1-1) and move 10 points ahead of the Oilers in the Pacific Division standings. Edmonton has four games in hand.

Leon Draisaitl, the NHL’s second-leading scorer, and McDavid were held without a point for the second straight meeting with the Knights. McDavid didn’t have a shot attempt through two periods, and his first shot on goal came with 14:55 left in the third.

The Knights finished with 26 blocked shots in their first visit to Edmonton since the 2020 playoff bubble.

“Once we got our legs under us in the second period, we jumped to getting on pucks and taking away their space,” defenseman Alex Pietrangelo said. “But the neutral zone was real good for us. I didn’t think we gave them any chances to get through there with speed, which is obviously where they’re really, really dynamic.”

Pietrangelo recorded his 500th career NHL point with a goal in the second period, as the Knights scored on three of their first 10 shots. He is the 13th active defenseman to reach the 500-point milestone.

William Karlsson and Reilly Smith each finished with a goal and an assist, and Brett Howden scored midway through the first period.

Goalie Laurent Brossoit started in the first of back-to-back road games in Alberta and made 28 saves to record his third career shutout.

It was his first this season after he nearly blanked Anaheim on New Year’s Eve, but allowed a goal in the final 12 seconds and settled for a 3-1 win.

The Knights allowed 17 scoring chances and 11 high-danger chances in the first period at five-on-five, according to NaturalStatTrick.com, but Brossoit covered up all those defensive mistakes.

His best stop came with 5:22 remaining in the first when he slid to his left and turned away Zack Kassian from point-blank range after the Knights were careless with the puck in their own zone.

“I definitely was juiced up to play this one,” Brossoit said. “I don’t think I’ve won against Edmonton since moving on from them, so it’s always nice to win and of course to get a shutout meant even more.”

After a December slump, the penalty kill is back to its old ways.

The Knights went 3-for-3 against Edmonton’s third-ranked power play and have successfully killed 19 of the past 20. They’ve also scored a short-handed goal in two consecutive games.

Karlsson put the Knights ahead 2-0 with 3:05 remaining in the first period when he finished off a two-on-none during an Oilers power play.

Smith blocked a shot by Edmonton defenseman Tyson Barrie near the blue line and had enough fuel at the end of a long shift to get to the loose puck. Karlsson blew past Barrie in the neutral zone to create the odd-man rush and finished off Smith’s pass in tight.

It was the league-leading eighth short-handed goal for the Knights.

“We had a great commitment,” DeBoer said. “It was a huge block at that time and a huge momentum swing. They go from having the puck on their stick on a power play and a chance to us with a 2-0 lead.”

Howden’s recent streak on the fourth line bumped center Nolan Patrick to the press box as a healthy scratch.

It was the fourth straight appearance with a goal for Howden, who extended his point streak to five games (4-3-7). His eight goals are one shy of his career high set in 2019-20 with the New York Rangers.

“He’s hot, let me tell you,” Pietrangelo said. “He’s really found his stride here playing well with us, certainly. Pete trusts him in different situations. That speaks volumes to how well he’s playing.”