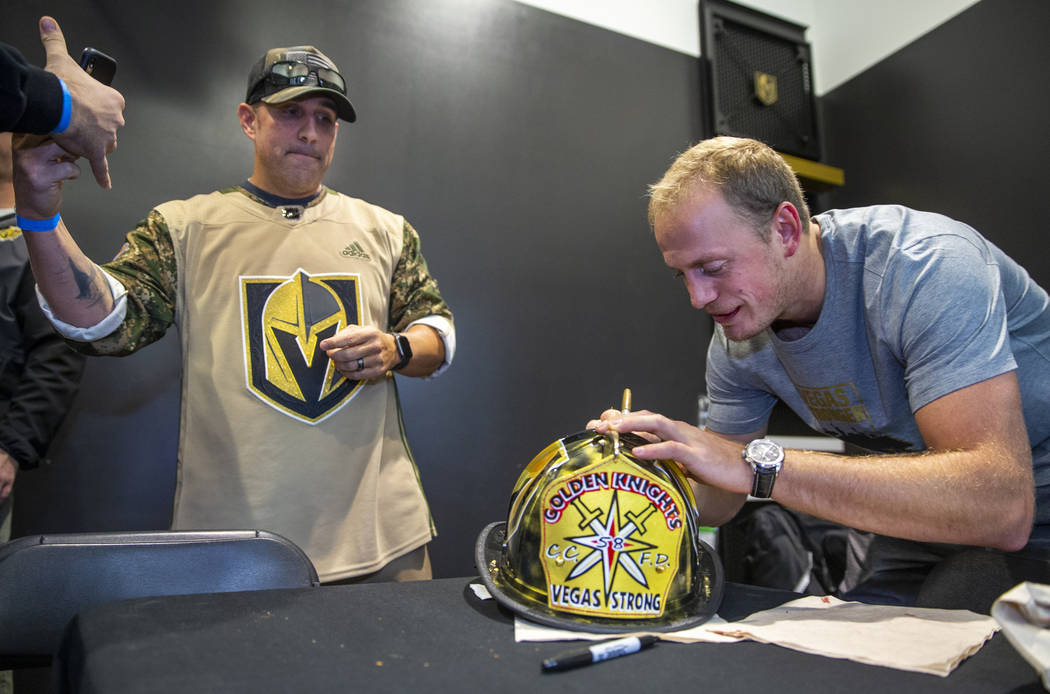 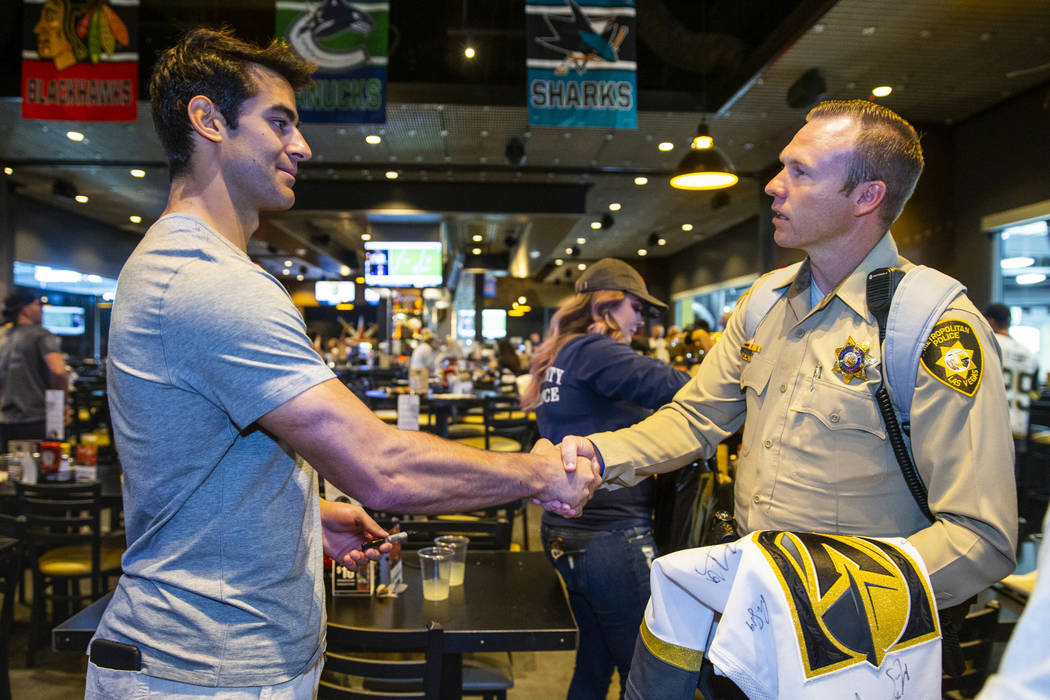 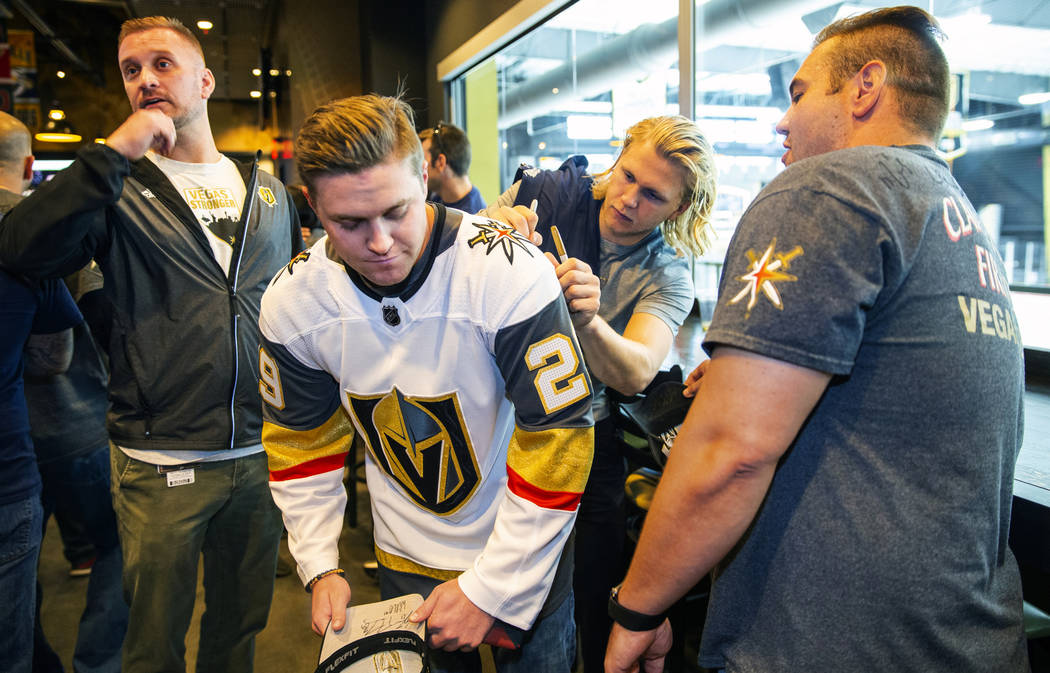 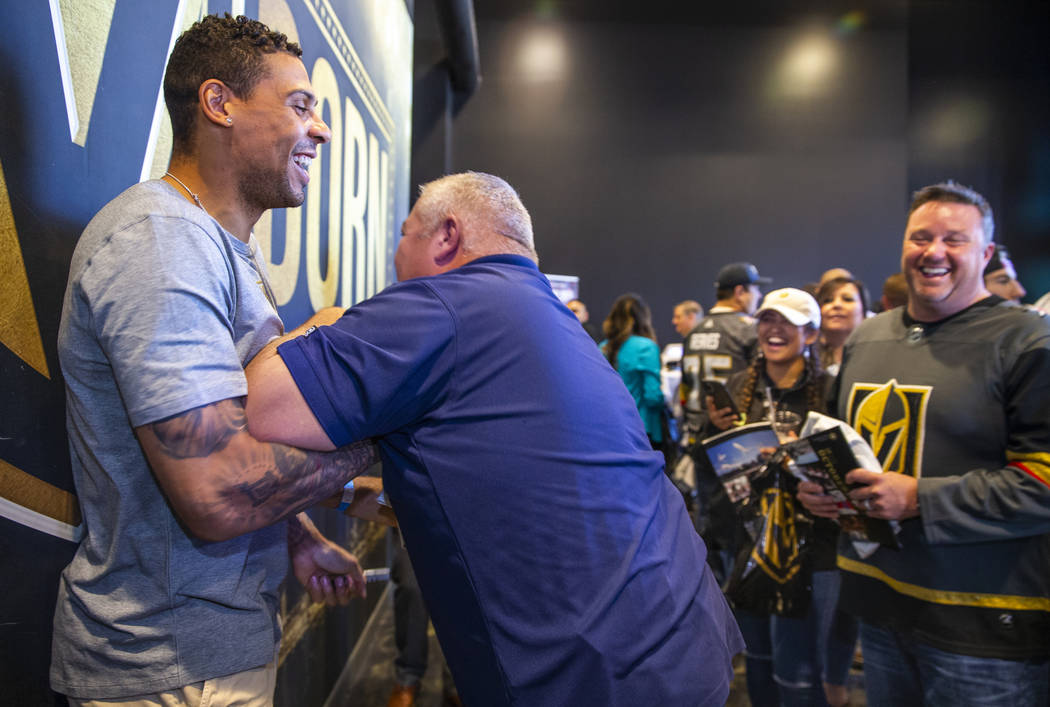 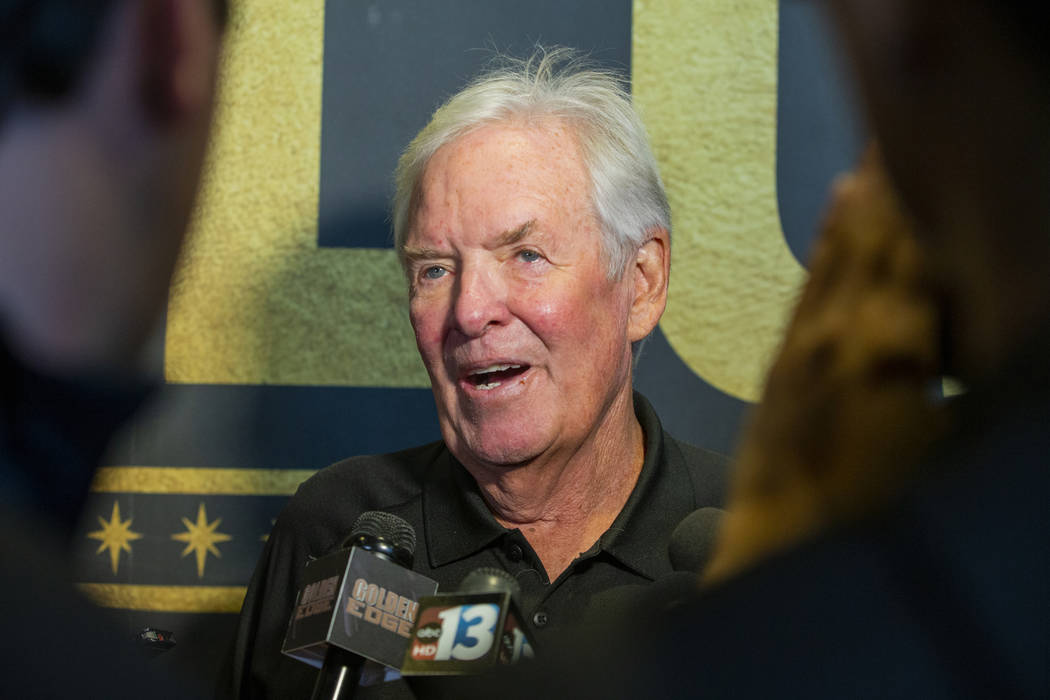 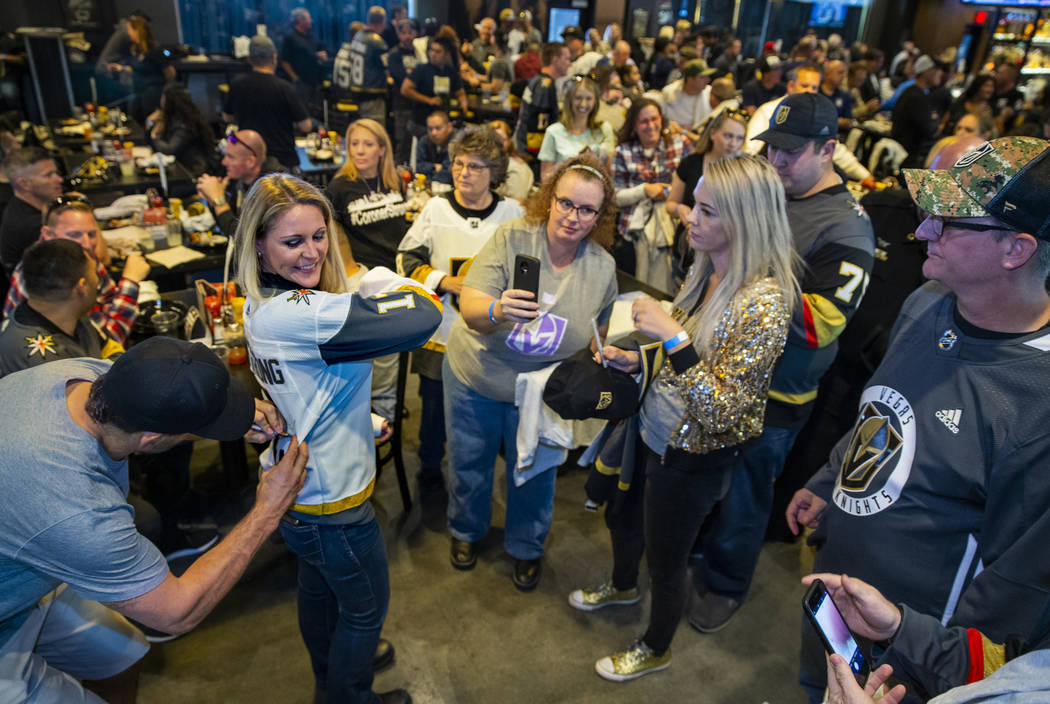 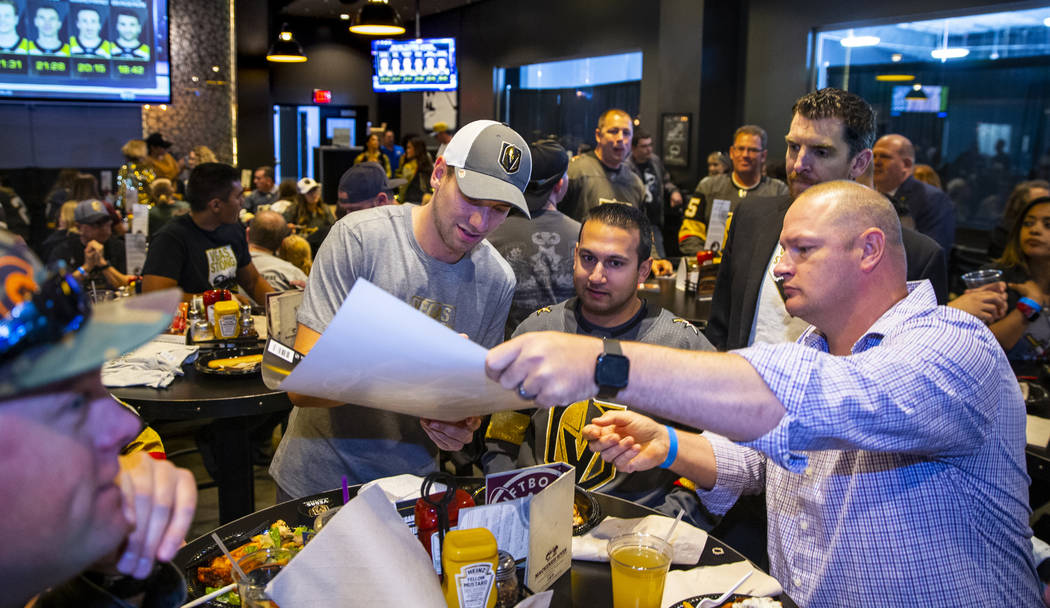 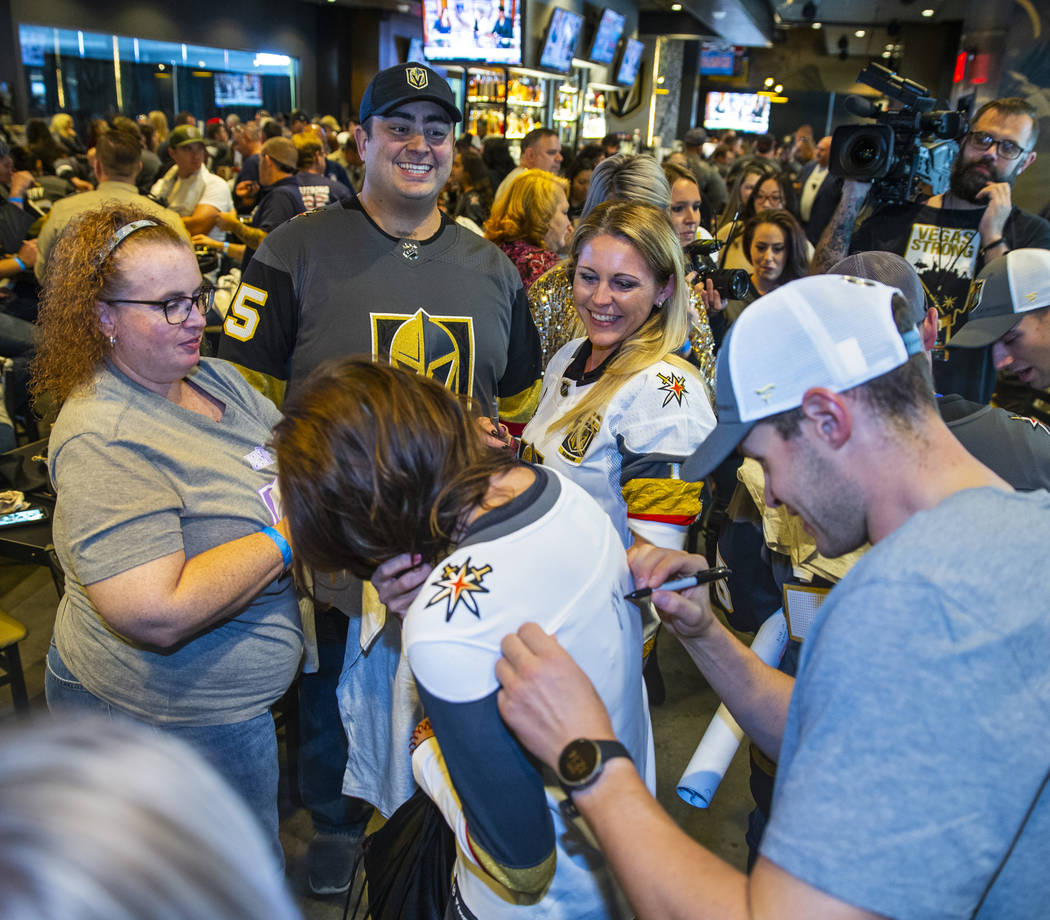 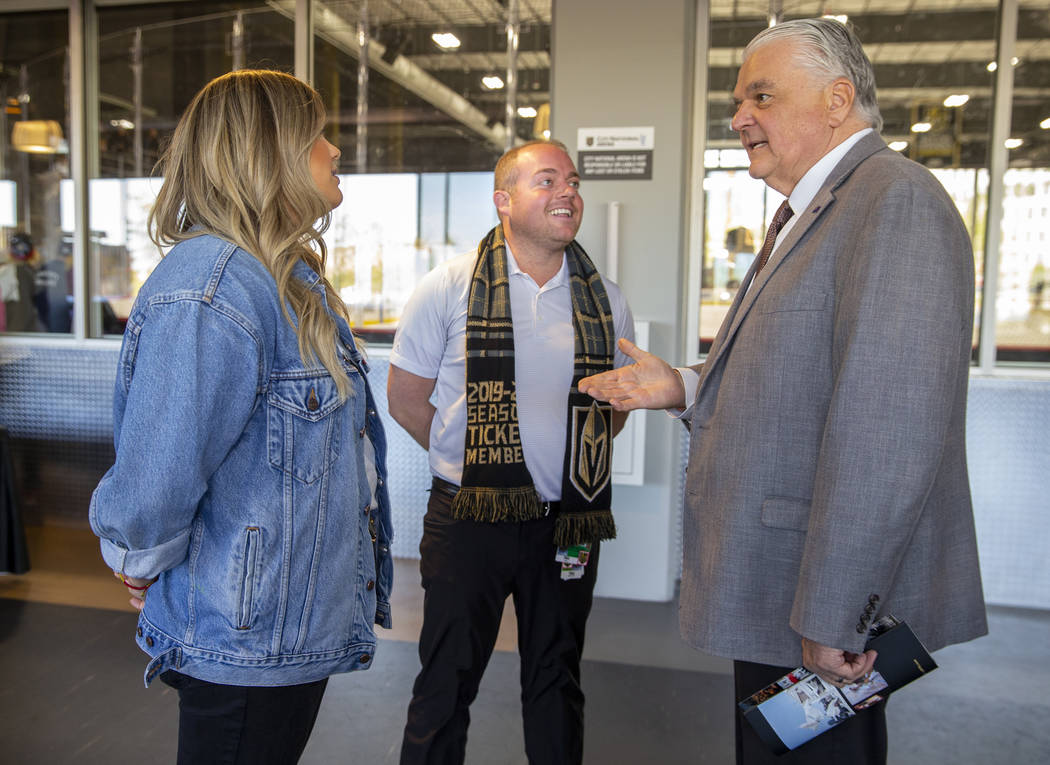 Gov. Steve Sisolak, right, chats with Todd Pollock and his daughter Carley as the Vegas Golden Knights honor first responders, Mandalay Bay employees and others affected by October 1st with a private practice session at City National Arena on Tuesday, Oct. 1, 2019 in Las Vegas. Pollock is with the Knight's ticketing office and sold the governor his season tickets. (L.E. Baskow/Las Vegas Review-Journal) @Left_Eye_Images 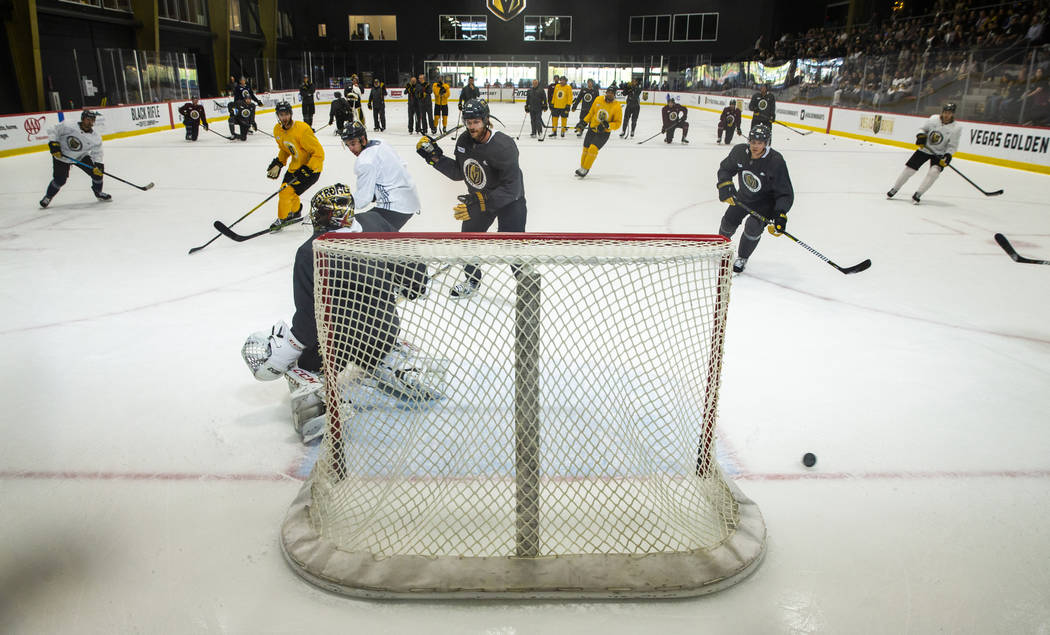 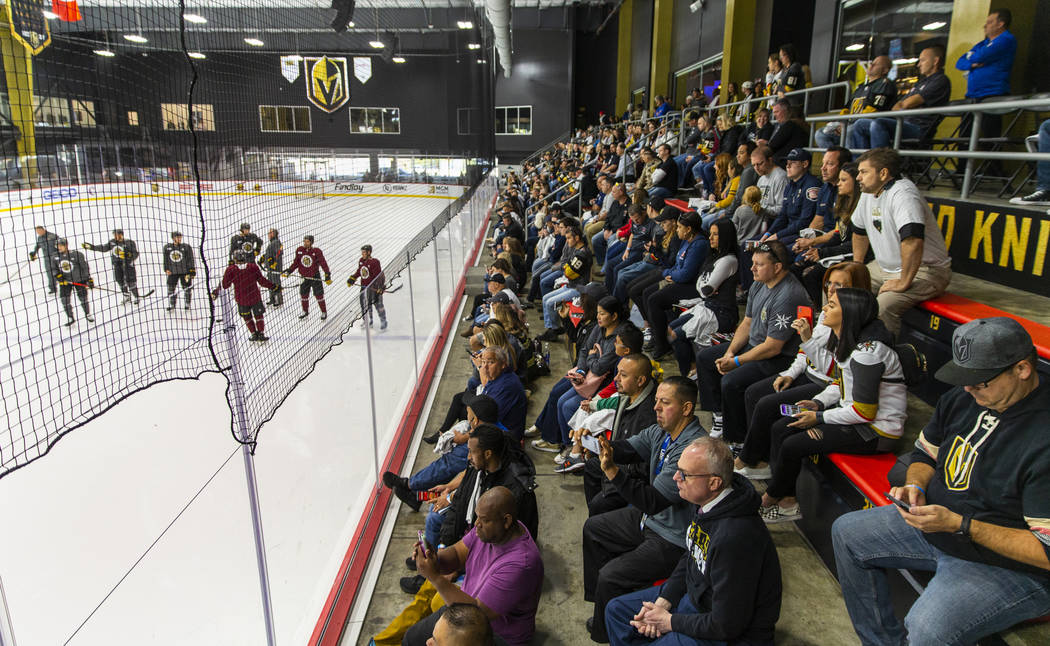 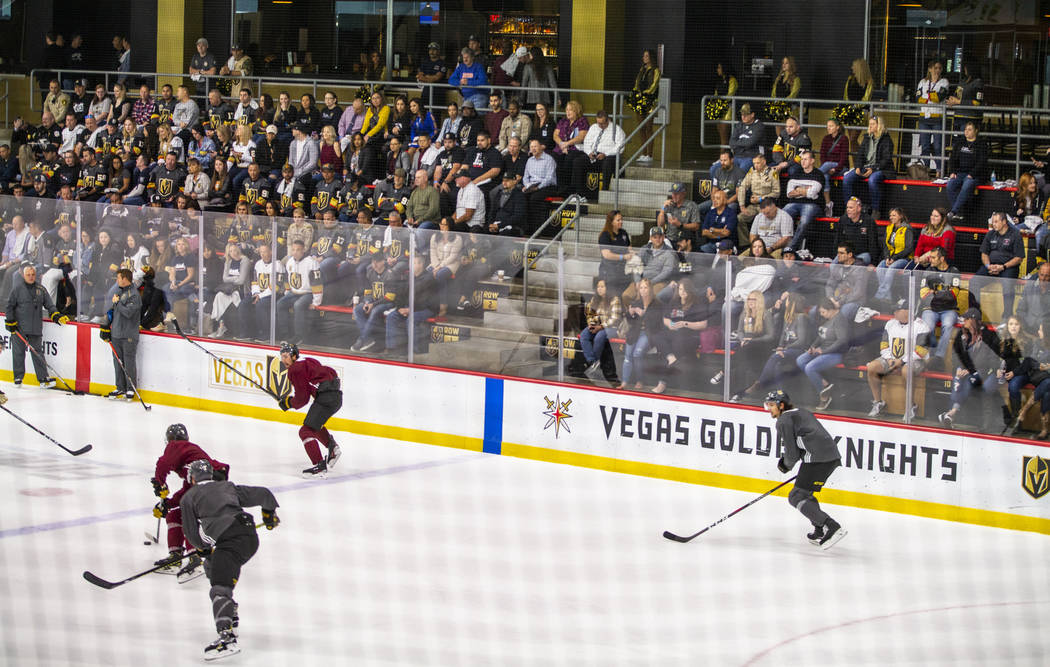 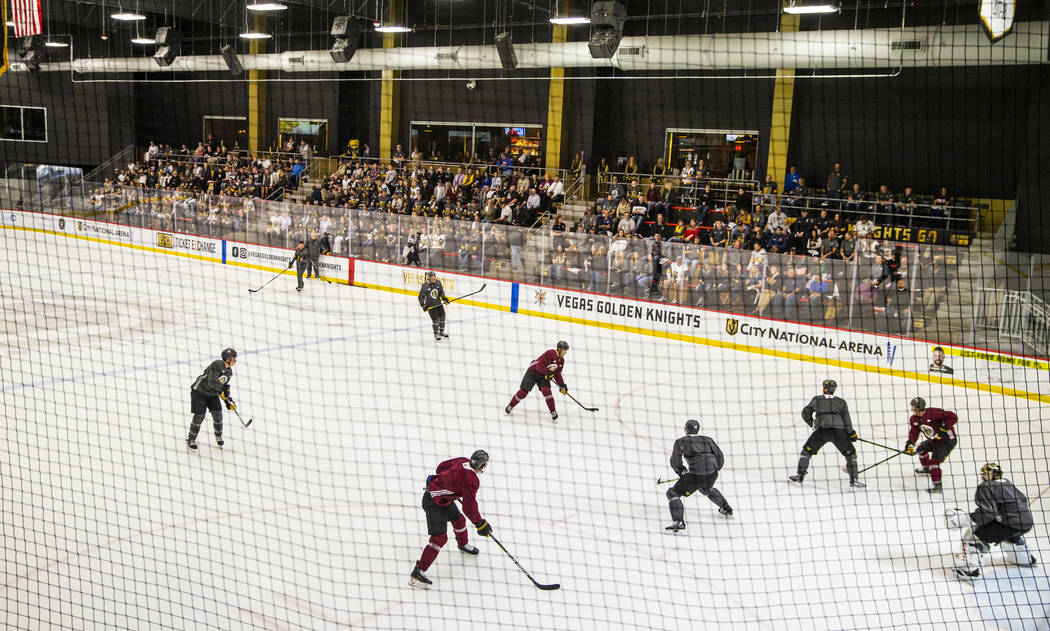 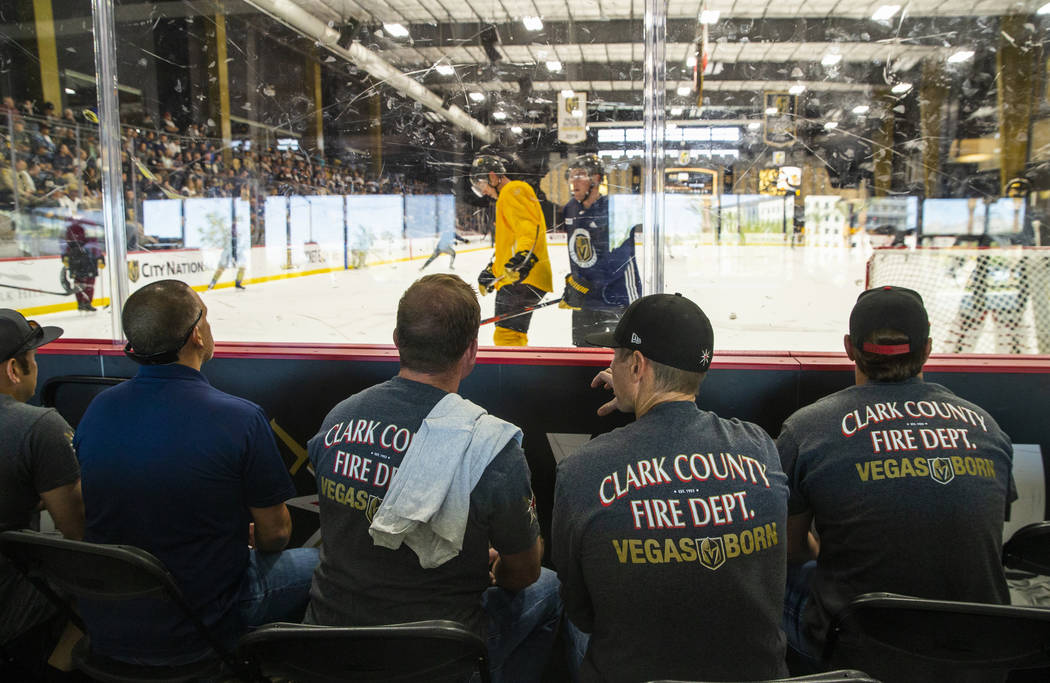 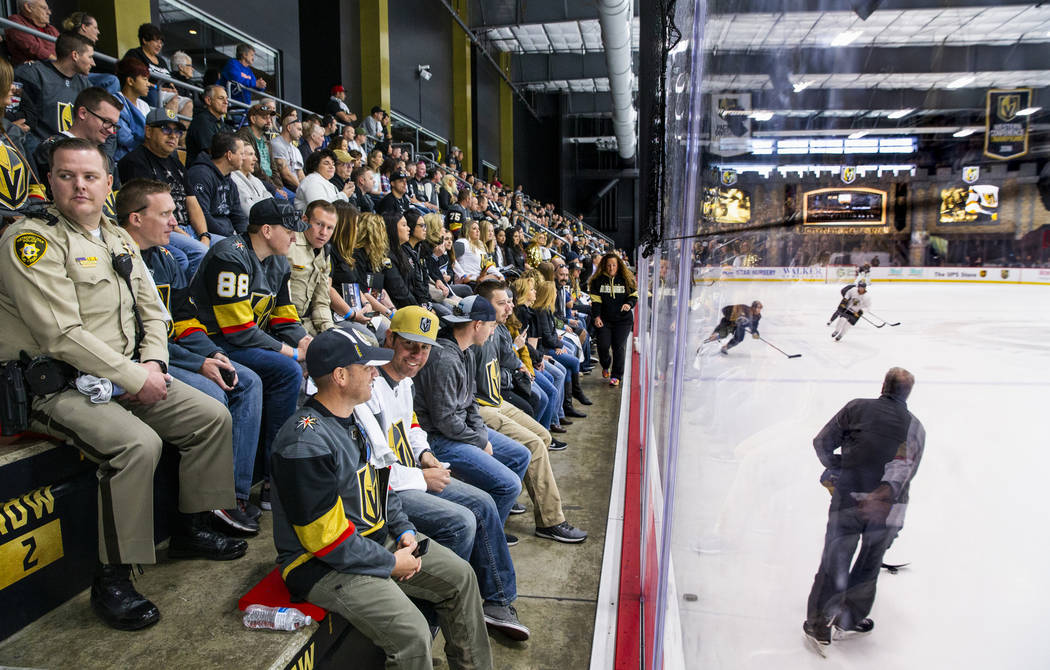 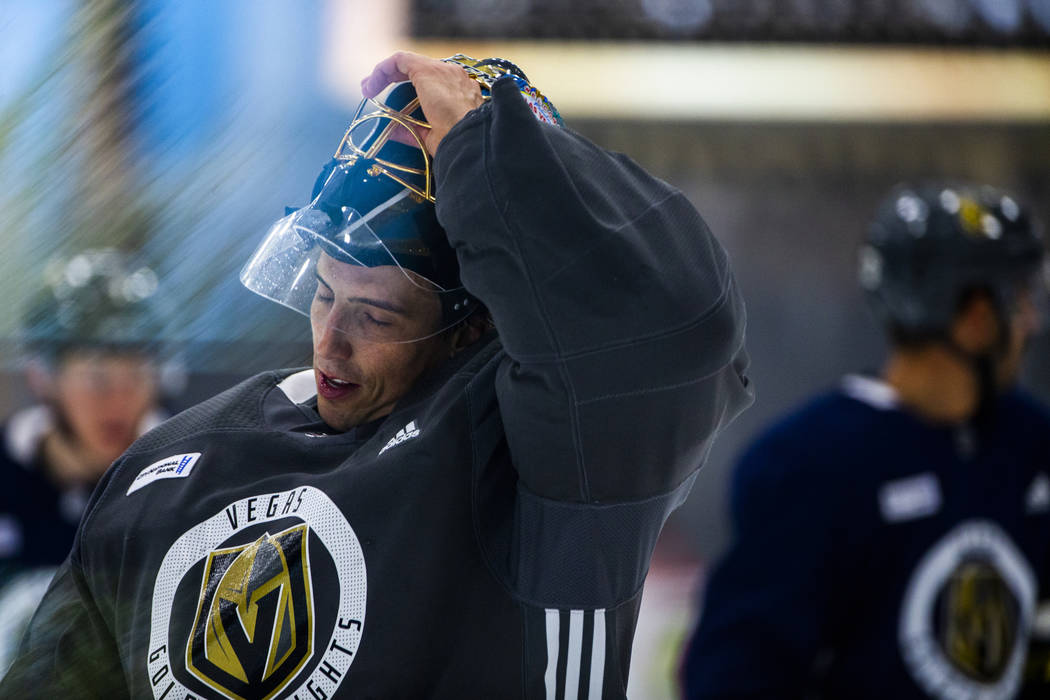 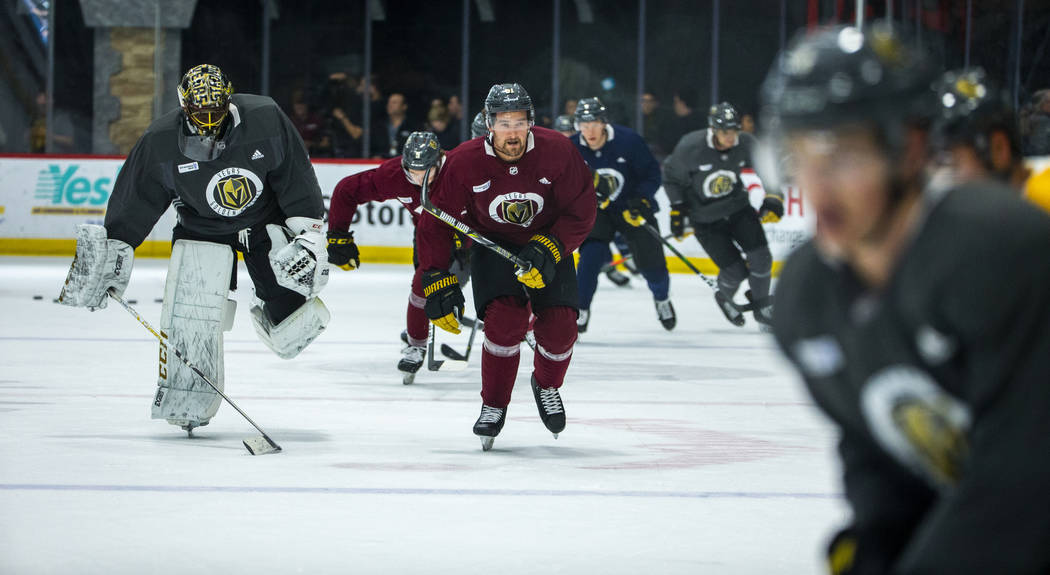 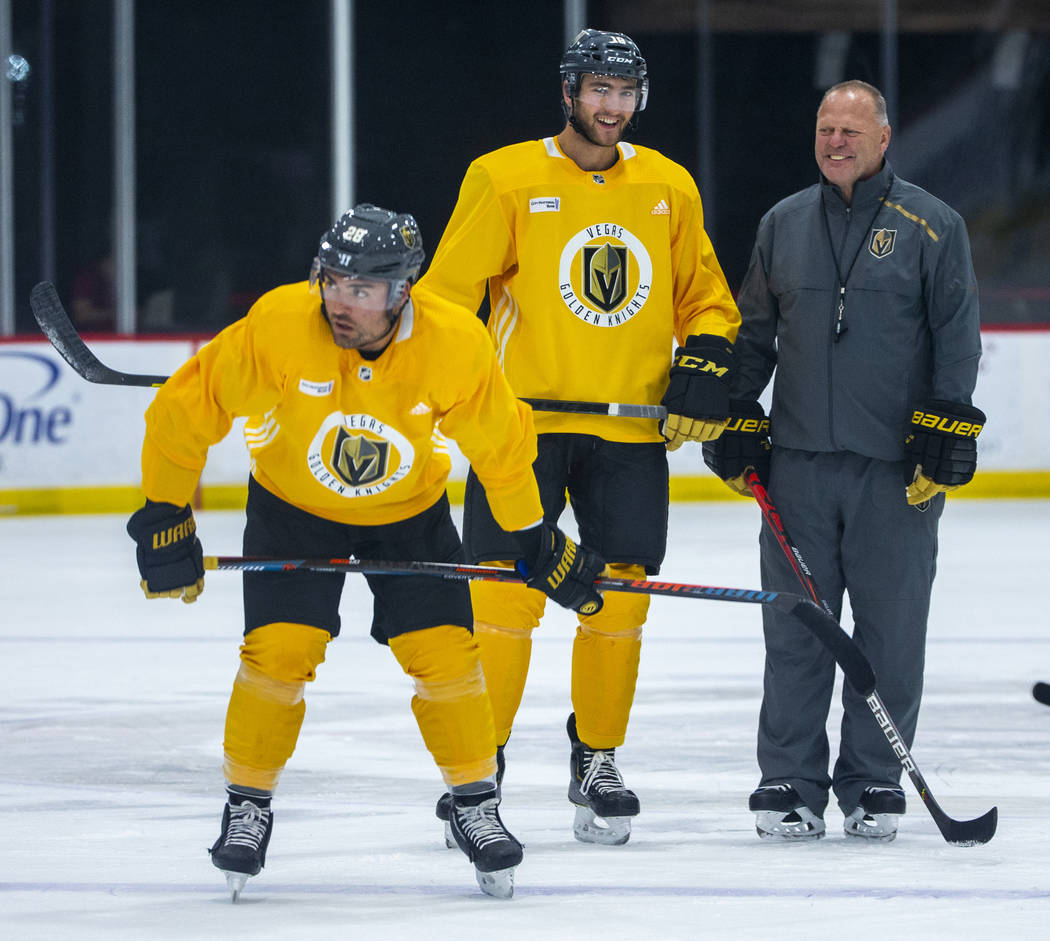 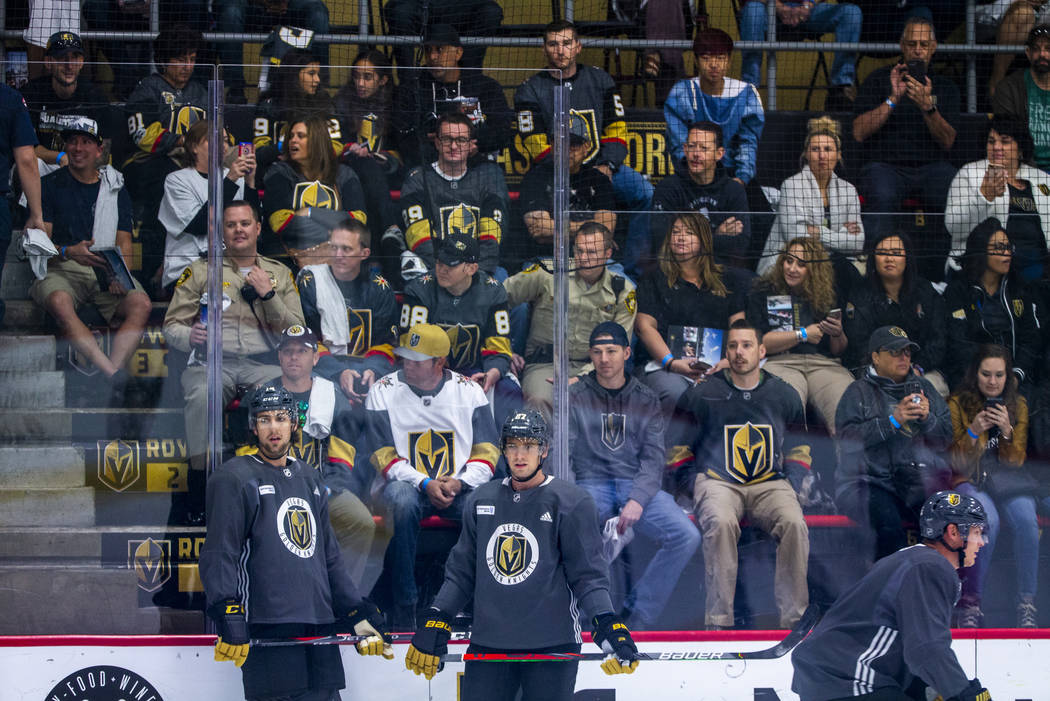 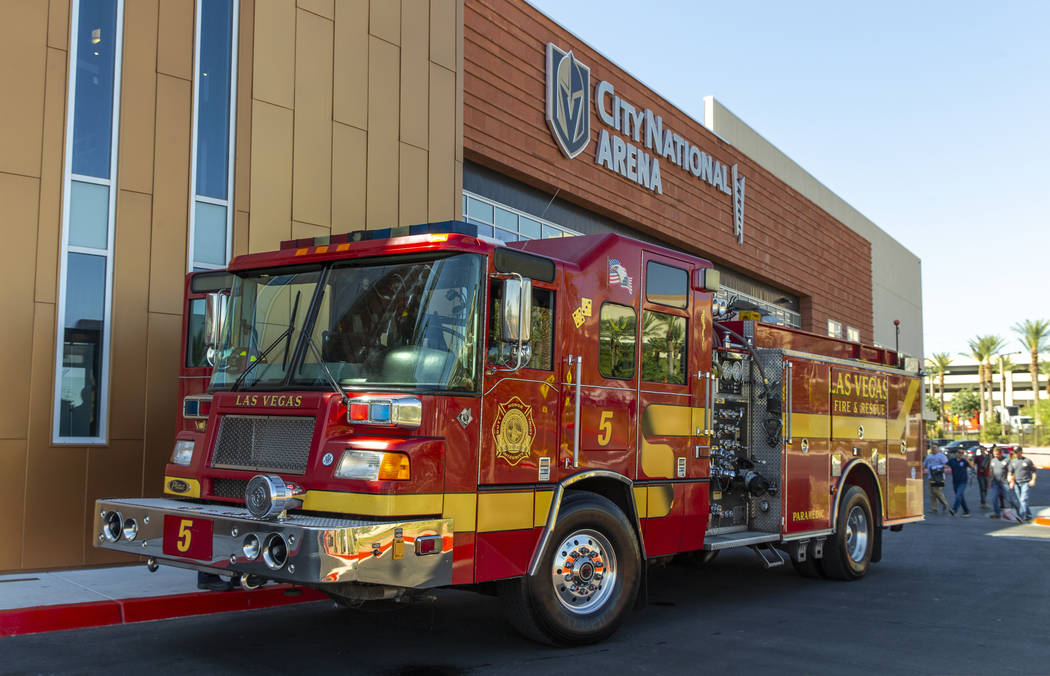 A Las Vegas Fire truck is parked outside City National Arena as the Vegas Golden Knights honor those first responders, Mandalay Bay employees and others affected by October 1st with a private practice and meet on Tuesday, Oct. 1, 2019 in Las Vegas. (L.E. Baskow/Las Vegas Review-Journal) @Left_Eye_Images

They came in emergency medical service vehicles and cars with “professional firefighter” license plates. They came in tan, navy and dark gray uniforms.

They came, in the case of Nevada Gov. Steve Sisolak, in a light gray suit.

About 500 first responders, Mandalay Bay employees and others affected by the Route 91 Harvest Festival shooting poured into City National Arena on Tuesday for a closed Golden Knights practice. They received a stick-tap salute from 23 members of the team on the ice and were treated to a luncheon and meet-and-greet off it on the second anniversary of the worst mass shooting in modern American history that killed 58 people.

Members of the Knights signed autographs, took photos and commiserated with those in attendance. And they took time to remember how the deepest of tragedies formed a connection between the team and fans unlike any other in the NHL.

“I’ve had the chance to talk to a few families, and you just feel so sad for what happened to the whole community,” goaltender Marc-Andre Fleury said. “We didn’t heal anyone or save anyone, but hopefully we got to distract them from what was happening and give them something to be proud of and think about something else during the times our games were on.”

Oct. 1, 2017, still feels like yesterday to many Knights. The team wrapped up its first preseason with a 5 p.m. game against the San Jose Sharks at T-Mobile Arena. Some players went home. Some headed to a group dinner at The Cosmopolitan of Las Vegas. All were in shock when the night turned horrific.

But then they went out in the community and showed their new fans how much they cared. They went to blood drives. They visited concert goers still in the hospital.

Those efforts continued with Tuesday’s practice.

“It was probably the event that brought the team closer to the community than it ever would have been, and the community closer to the team,” owner Bill Foley said. “We were able to be respectful but recognize what happened Oct. 1 a couple of years ago. And we want to keep on recognizing that. Our players aren’t forgetting.”

Neither are those who attended Tuesday’s event. Such as Jesse Gomez, a firefighter with the Clark County Fire Department, who attended the concert with his family.

Gomez got his family to safety before helping others leave the venue and get to the street.

“There’s just been so many people in this community that were affected, and I’m glad we’re all here to remember,” Gomez said. “Everything happens for a reason, and I’m just happy the Golden Knights just happened to be here. It seemed like the community rallied around them.”

The Knights want to continue to be a beacon. They created a custom image for their City National Arena scoreboard featuring the words “WE ARE VEGAS STRONGER” and a photo of Deryk Engelland giving his emotional pregame speech before the Knights’ first-ever home game Oct. 10, 2017.

It also gave out “Vegas Stronger” shirts that the players wore Tuesday. All so the Knights could continue to honor those affected and show their appreciation for a connection forged in tragedy.

“You see terrible things happen all over the place, but you never expect it to happen here at home,” said Engelland, a longtime Las Vegas resident. “When it does and you know a lot of people that were down there, it definitely affects you. It puts things into a bigger perspective than hockey. Anytime we can get out as a team and help the community in different little ways, it’s always exciting for us to go out there and do that.”