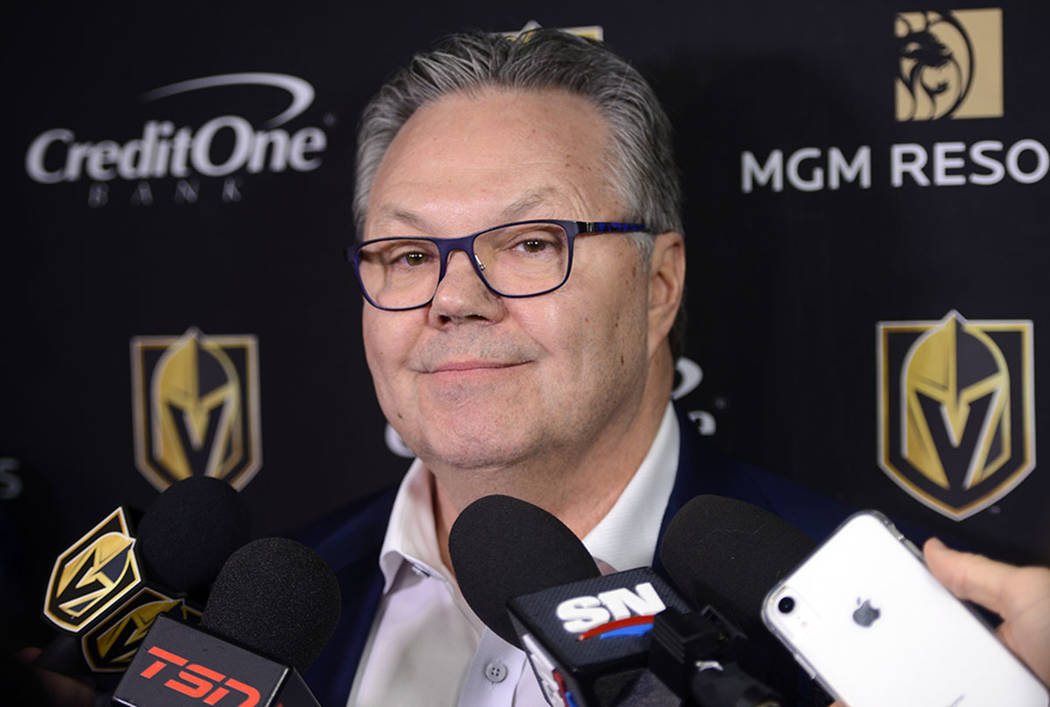 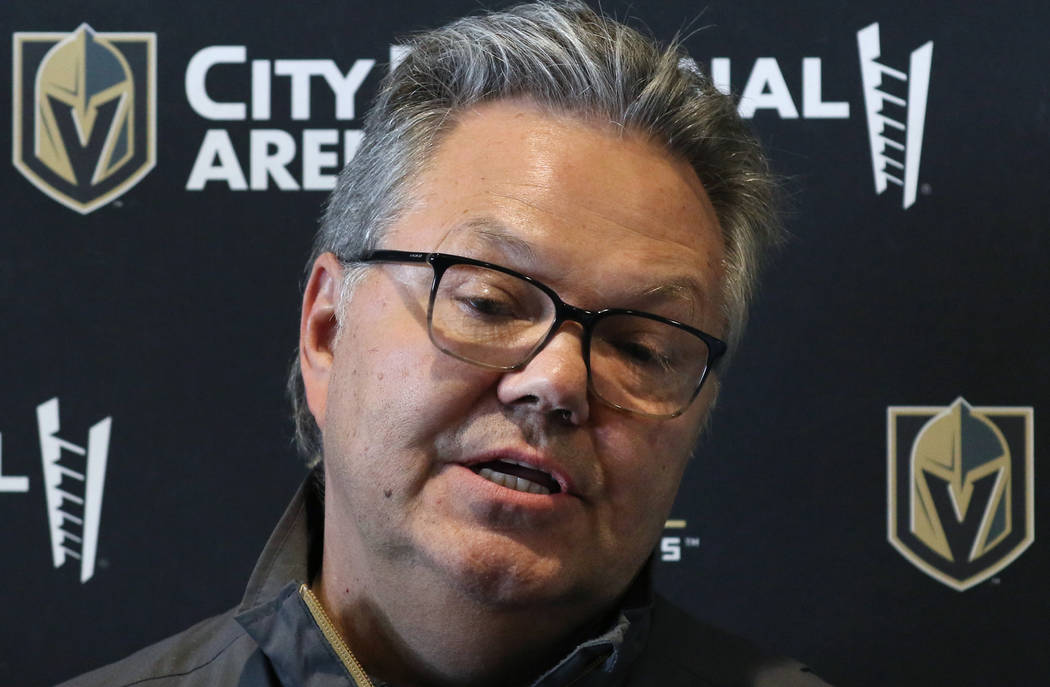 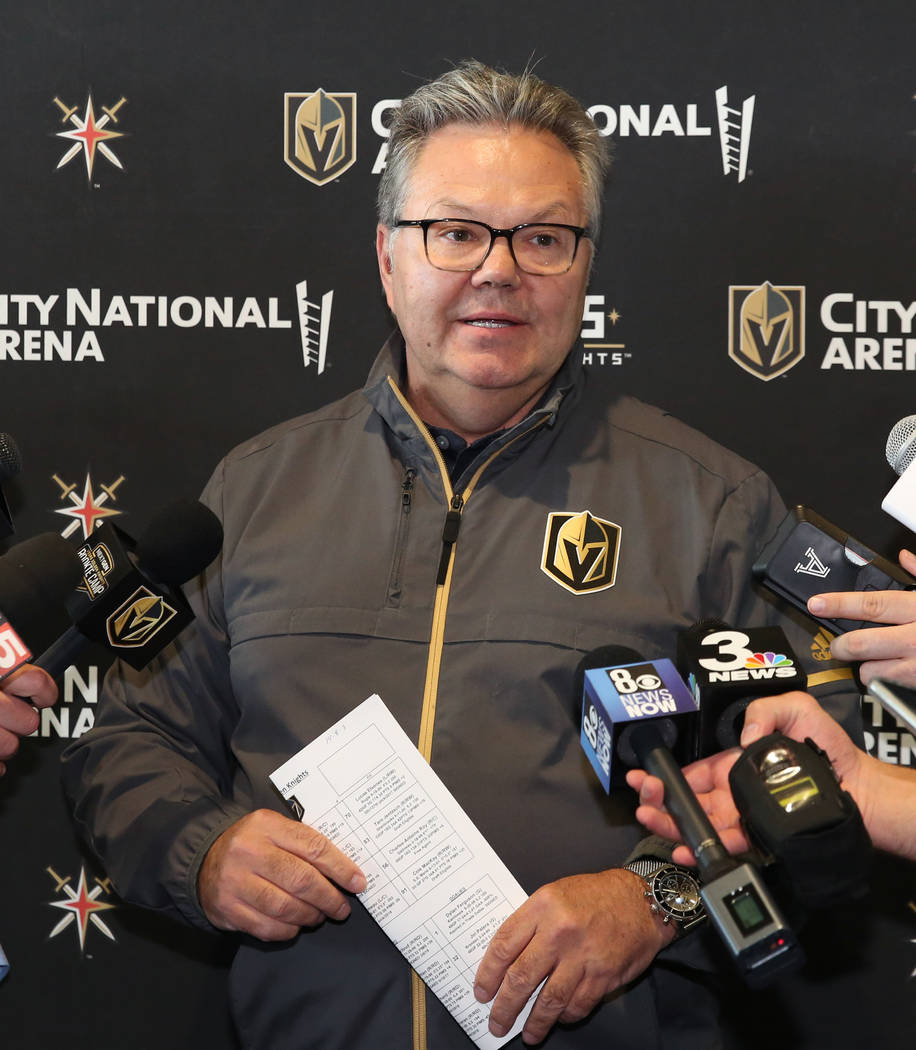 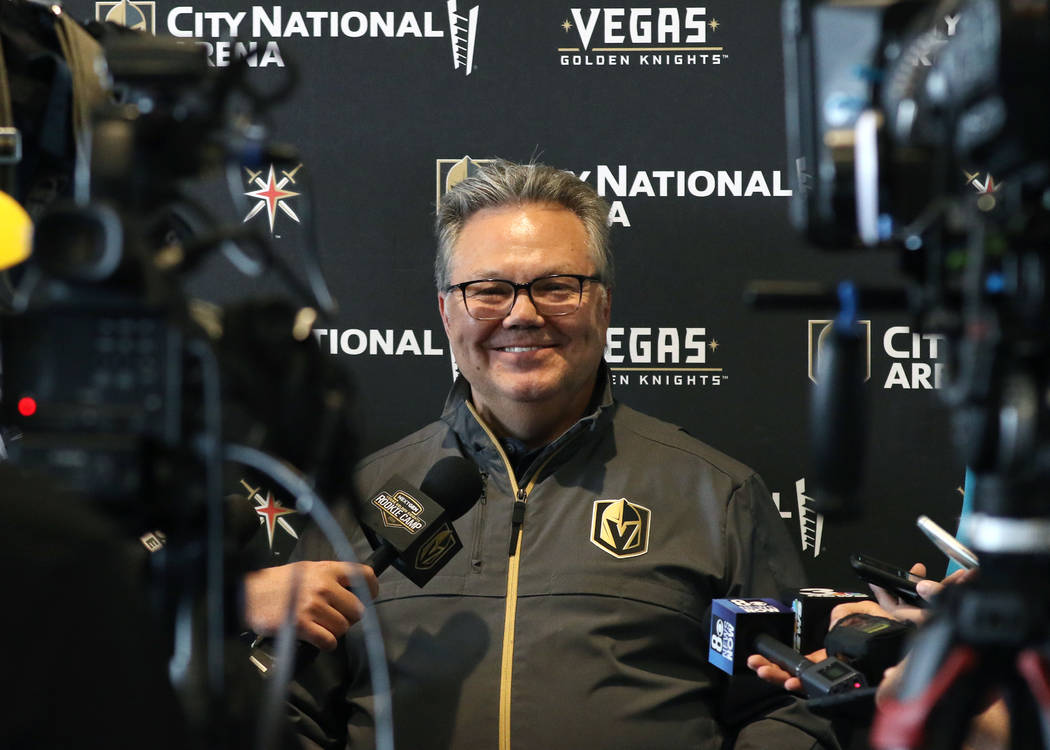 Kelly McCrimmon’s first six months as general manager of the Golden Knights were busier than even he could have envisioned.

Since his promotion, McCrimmon helped orchestrate four trades, re-signed two players to multiyear extensions, rebooted the team’s goaltending position and was involved in the purchase and relocation of an American Hockey League franchise to Henderson/Las Vegas.

But the most shocking decision during McCrimmon’s brief tenure came the morning of Jan. 15 when popular coach Gerard Gallant was fired.

In an interview Wednesday with the Review-Journal, McCrimmon elaborated on the coaching change and why he believed it was necessary.

“I felt our identity had changed,” McCrimmon said. “We were built on a mindset of players that had something to prove and played with a real chip on our shoulder. I thought we got more comfortable as time went on, and it changed our identity.

“The margin of victory is very fine in our league. That identity for me didn’t allow us to be our best. That was part of what went into the decision. That’s on all of us. That’s not pointed at one or two people. It happened over time, and we felt that it had slipped a little bit.”

Under coach Pete DeBoer, the Knights are 12-3-2 and climbed atop the Pacific Division standings with five weeks remaining in the regular season. They carry an NHL-best eight-game win streak entering Sunday’s game against Los Angeles at T-Mobile Arena.

McCrimmon, who spoke before leading scorer Mark Stone sustained a lower-body injury in Wednesday’s win over Edmonton, noted he’s pleased with the improved consistency and structure in the Knights’ game.

“Puck support, breakouts, those areas of our game are stronger,” McCrimmon said. “Some of the other teams in the Pacific got better at the trade deadline, as well. The focus is clearly just on our own team and playing at a high level down the stretch.”

After fleecing the Capitals in the December trade for forward Chandler Stephenson, the Knights acquired players at all three positions ahead of the deadline.

Defenseman Alec Martinez was an early target after McCrimmon said the team’s scouting department identified that several high-profile blue liners such as Tyson Barrie of Toronto, Matt Dumba of Minnesota and Jeff Petry of Montreal were likely to remain with their clubs.

“We put a lot of time into, in effect, eliminating some real good defensemen that we genuinely believed were not going to be moved and felt it was important not to get caught in long discussions and be left empty-handed,” McCrimmon said.

In addition to Martinez, 23-year-old defenseman Zach Whitecloud worked his way into the lineup after being recalled following the All-Star break.

As a result, rookie Nic Hague remains in the minors, while Deryk Engelland, who turns 38 on April 3, may have played his final game in a Knights uniform.

“Deryk is keeping himself ready to go in the lineup,” McCrimmon said. “He’s got good lines of communications with Pete, and it’s very much possible that he’d be back in the lineup. It’s a function of Zach Whitecloud playing very well.”

The Knights made a splash at the trade deadline again, acquiring goalie Robin Lehner from Chicago and forward Nick Cousins from Montreal.

McCrimmon and Gallant said early in the season the plan was to use backup Malcolm Subban more often to alleviate Marc-Andre Fleury’s workload, but that never occurred.

Fleury, 35, is eighth among goalies in minutes played and no doubt would have carried the load for the playoff push seeing as the Knights lost confidence in Subban before trading him to the Blackhawks.

Lehner will be an unrestricted free agent July 1, meaning the Knights must revisit their goalie succession plan in the summer.

“We were never working toward a 50-50 split,” said McCrimmon, referring to Subban’s time as the backup. “The idea is to have both your goalies performing at their highest level. Flower is our starter. We know when he’s playing his best that he gives our team a real good chance to win. That’s why it’s important that we are positioned for him to do that.

“Robin gives us a luxury to an extent, to be able to add a goalie of his caliber to our team when we already had Marc-Andre Fleury. … We felt vulnerable at that position.”

The Knights have been hit hard by injuries at forward, including Stone and Tomas Nosek in recent days. Alex Tuch remains day to day.

Forward Brandon Pirri was recalled by the Knights on Saturday.

One prospect who could eventually help the Knights this spring is Providence’s Jack Dugan, the NCAA’s leading scorer. The Knights are expected to try to sign the forward once his sophomore season is complete, though McCrimmon declined to comment on any potential negotiations.

McCrimmon also said 20-year-old Lucas Elvenes, who leads the Chicago Wolves with 43 points in 55 games, will continue to develop in the minors rather than being thrown into the thick of an NHL playoff race.

“Lucas has had a great year in Chicago, ahead of where I would have expected a 20-year-old coming from Europe to be,” McCrimmon said. “No rush for him. He’s right where he should be. He’s a really good prospect.”

Elvenes and other prospects will play for the Knights’ new AHL franchise starting next season. McCrimmon confirmed Rocky Thompson is under contract as coach, and the unnamed, Henderson-based team will begin to hire trainers, strength coaches, equipment managers and other staff in the coming months.

“We’ll fill all those positions and establish what the lines of communication are with our team and all that,” McCrimmon said. “We’ll make it a great franchise. There’s a lot of great advantages from a hockey and development perspective. It’s exciting to raise the profile of the AHL and grow hockey in Las Vegas.”