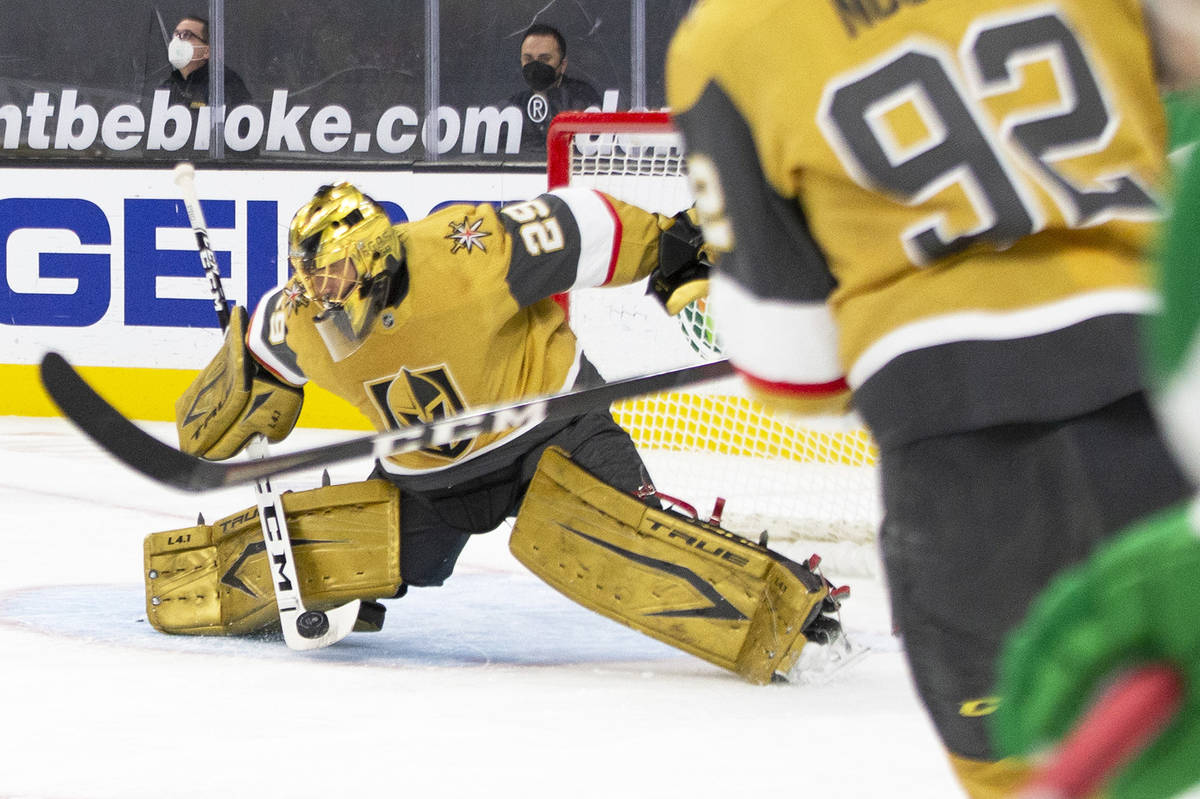 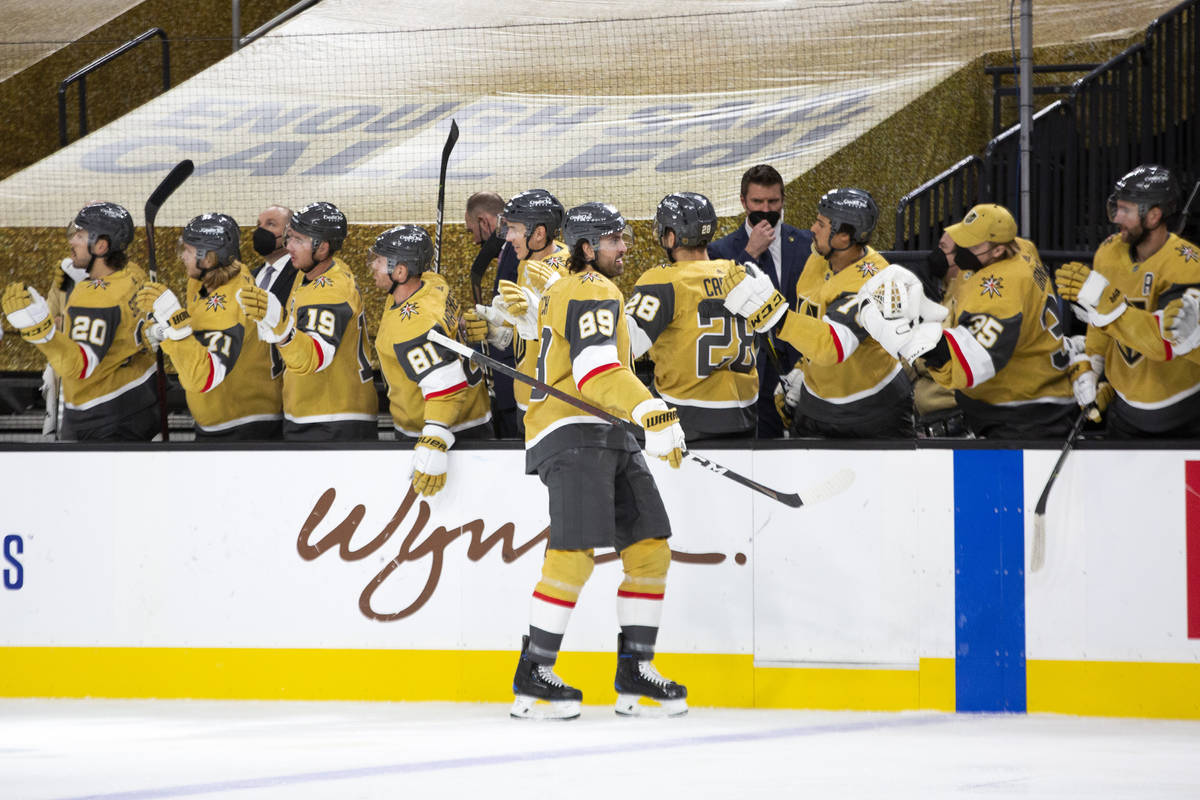 Golden Knights right wing Alex Tuch (89) is congratulated by the team after scoring the first goal of the game during the first period of their NHL hockey game against the Minnesota Wild on Wednesday, March 3, 2021, at T-Mobile Arena, in Las Vegas. (Ellen Schmidt/Las Vegas Review-Journal) @ellenschmidttt 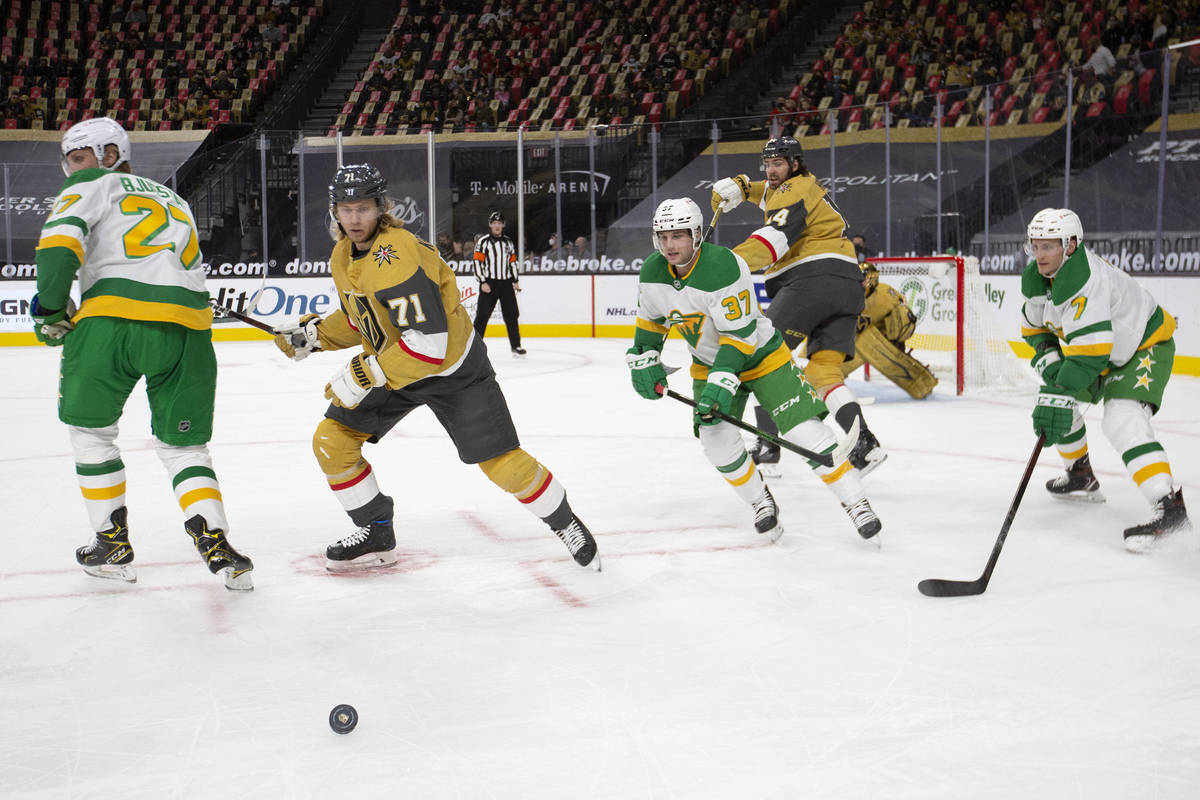 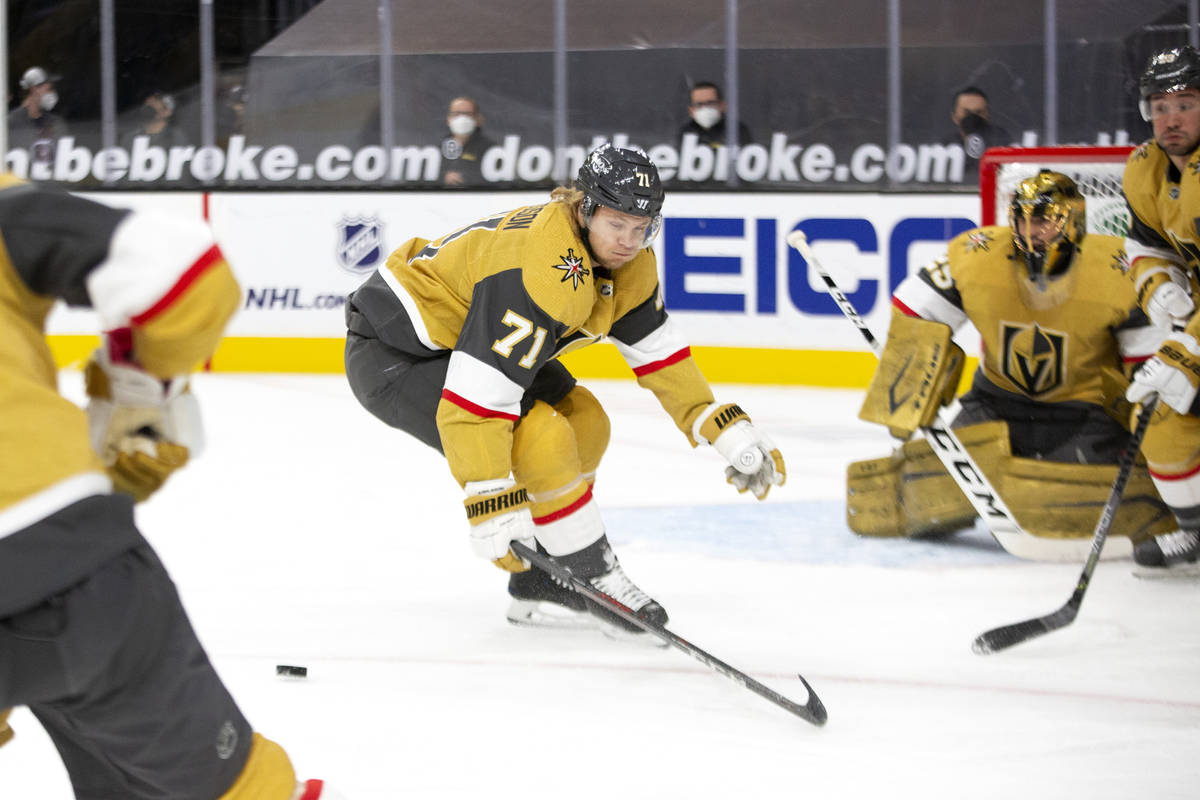 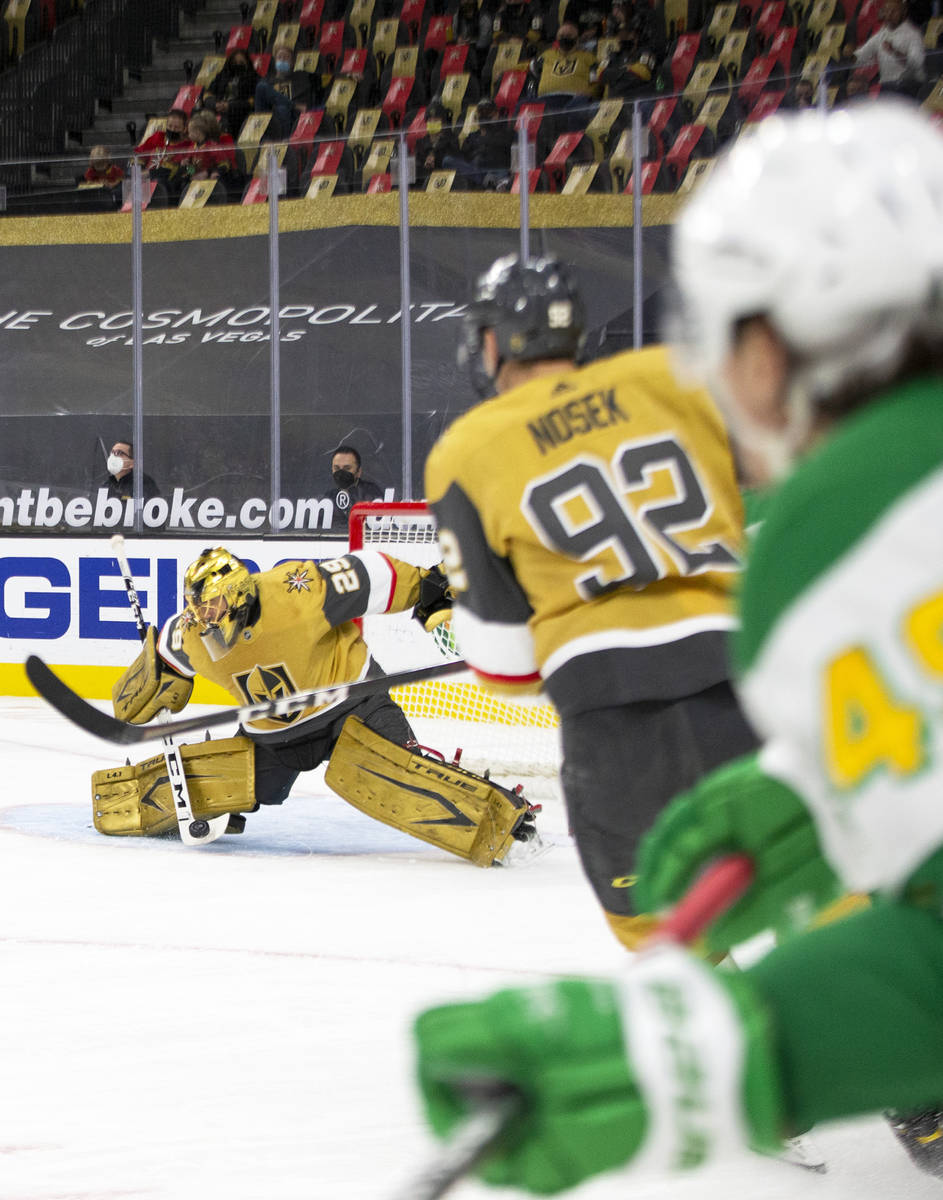 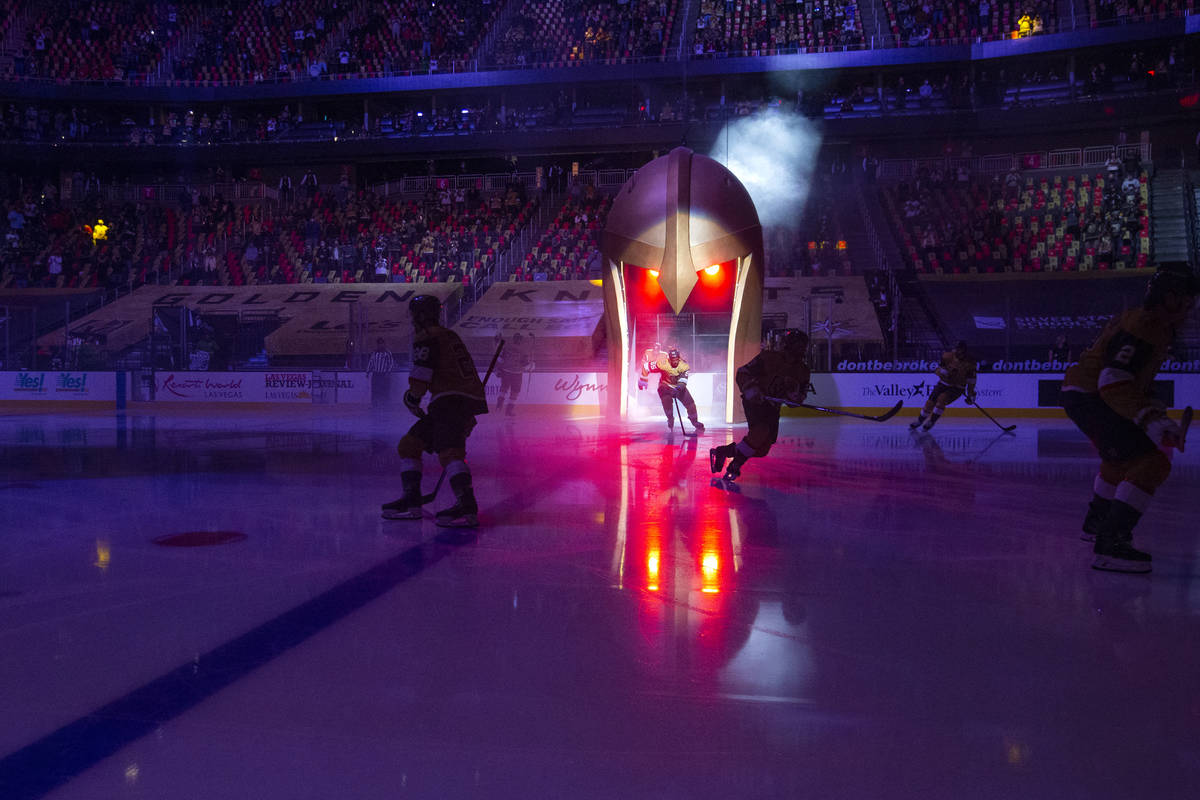 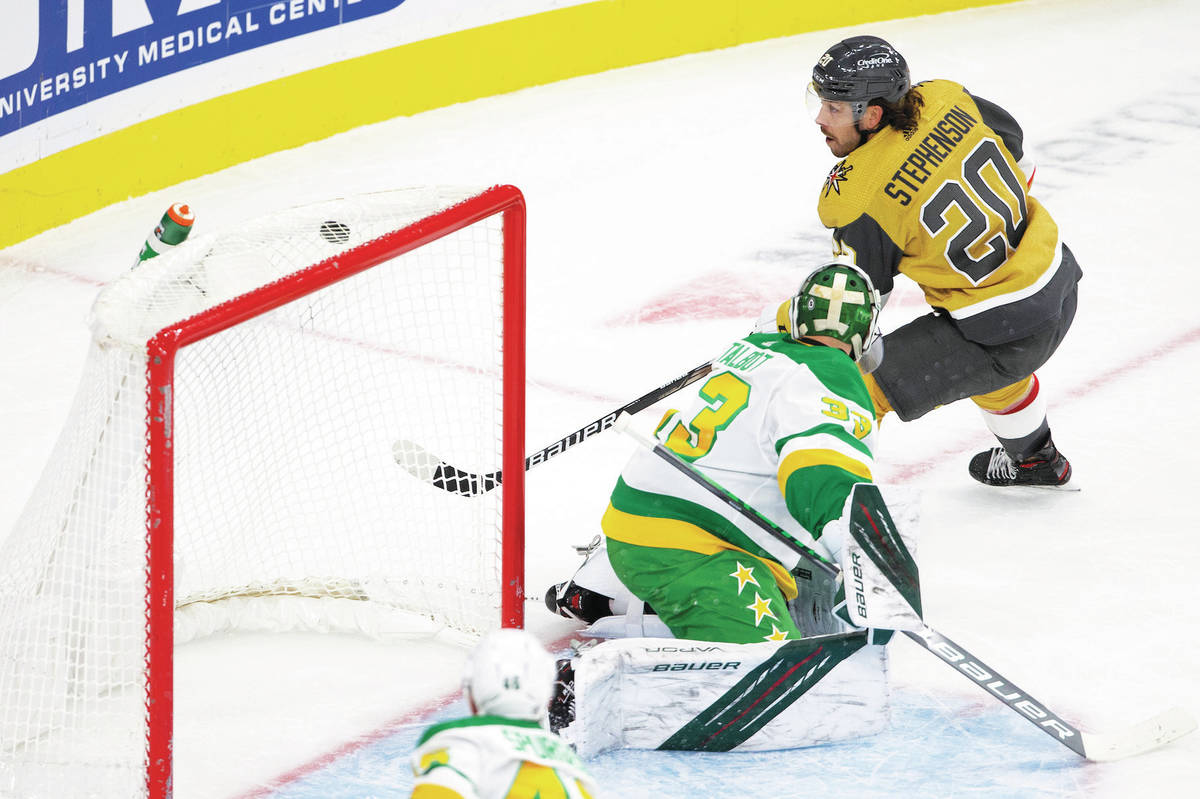 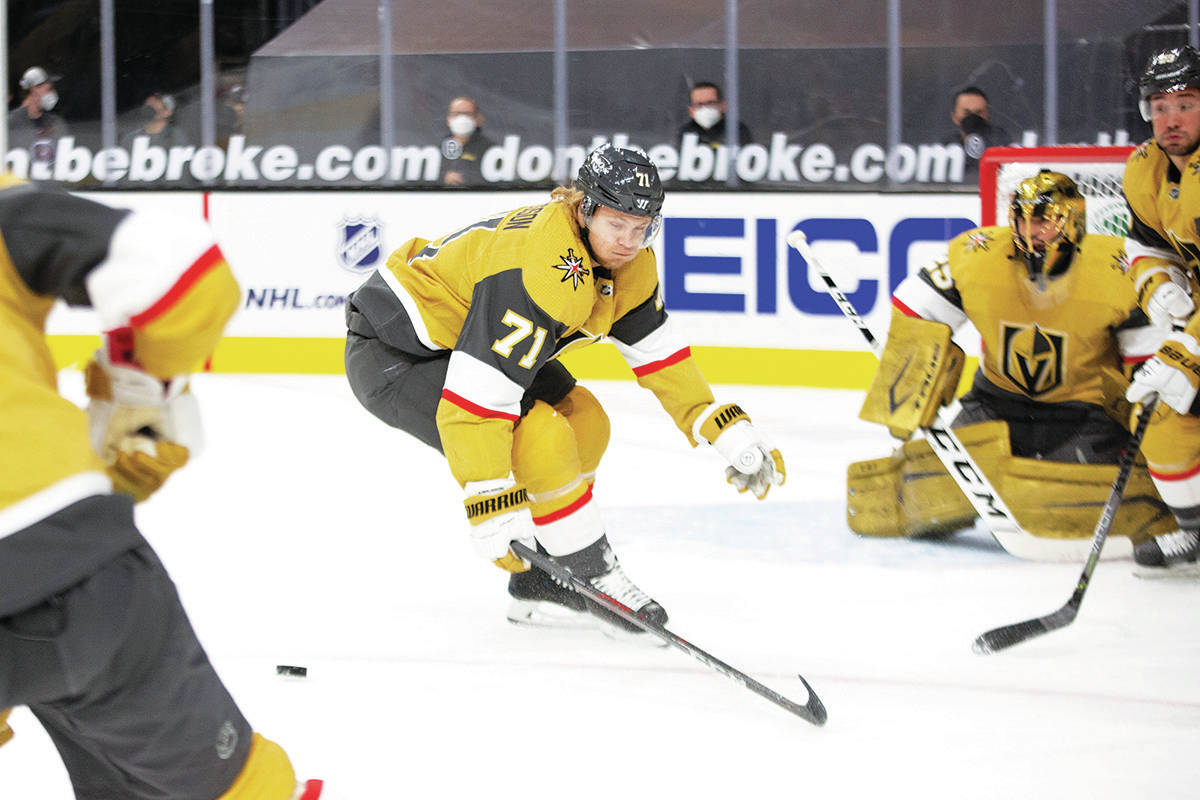 For any number of reasons, the Golden Knights and Marc-Andre Fleury historically haven’t had much success against the Minnesota Wild.

Maybe, just maybe, they’ve finally figured out how to overcome their kryptonite.

Fleury turned away all 20 shots he saw in the third period, and the Knights logged a 5-1 victory before 2,605 fans Wednesday night at T-Mobile Arena to sweep the two-game series.

“I thought we bent but didn’t break at some key moments,” coach Pete DeBoer said. “Couple big penalty kills, couple big saves by (Fleury) at the right time and some timely goals. We haven’t had a good record against this team historically, so I thought to come in and get four points took some big efforts by some people.”

The Knights (14-4-1, 29 points) extended their win streak to four games and remained atop the West Division one point ahead of St. Louis. They improved to 4-6 all time against Minnesota.

William Karlsson, Chandler Stephenson, Mark Stone and Alex Tuch each finished with a goal and an assist after DeBoer went back to his original top-six line combinations.

Fleury made his 10th consecutive start, the fourth time he’s made that many in a row during his four seasons with the Knights, and finished with 36 saves.

He made a phenomenal glove stop on Wild defenseman Jared Spurgeon at the first-period buzzer and denied rookie standout Kirill Kaprizov on a handful of occasions.

Fleury, who was 5-10 lifetime against the Wild before Wednesday, also turned away four shots on a Minnesota power play in the third period.

The Knights went 3-of-3 on the penalty kill and extended their streak to 18 without allowing a power-play goal.

Marcus Foligno had Minnesota’s goal midway through the second period when he tapped in a loose puck in the crease.

“I feel good,” Fleury said. “Like I said before, the more you play, the less you think out there. You just go out, play and you don’t think as much. You just react to what’s happening in front of you.”

The Knights scored on three of their eight shots in the third period. Stone increased the lead to 3-1 at 11:08 when he finished off a two-on-one with Stephenson, who waited patiently before making the pass.

Stephenson added his sixth goal with a nifty backhand on an odd-man rush before Karlsson scored into an empty net.

“I think our second period last game was a little bit of a lesson learned,” Stephenson said. “We wanted to weather the storm, especially in the third there being up by one. It just shows the team and character we have to settle it down. We don’t have too much panic in our game. We have a lot of confidence.”

Tuch put the Knights ahead about two minutes into the first period when he notched his ninth goal, surpassing his total from last season.

Tuch started the rush near his own blue line and went unnoticed by the Wild as the puck moved to defenseman Nic Hague on the opposite side of the ice.

Hague chipped a pass off the boards to Cody Glass, who backhanded a cross-ice pass for the on-rushing Tuch. His wrist shot beat Wild goalie Cam Talbot for his fifth goal in the past five games.

Jonathan Marchessault put the Knights ahead 2-0 with his seventh goal, moments after a power play expired. Tuch spotted Marchessault uncovered on the far side of the ice and threaded a pass through the slot at 5:03 of the second period.

“Playing with the lead all night, you get a team that has to open it up a little bit to try to get back in the game,” DeBoer said. “I thought we did a good job trying to take advantage of that.”