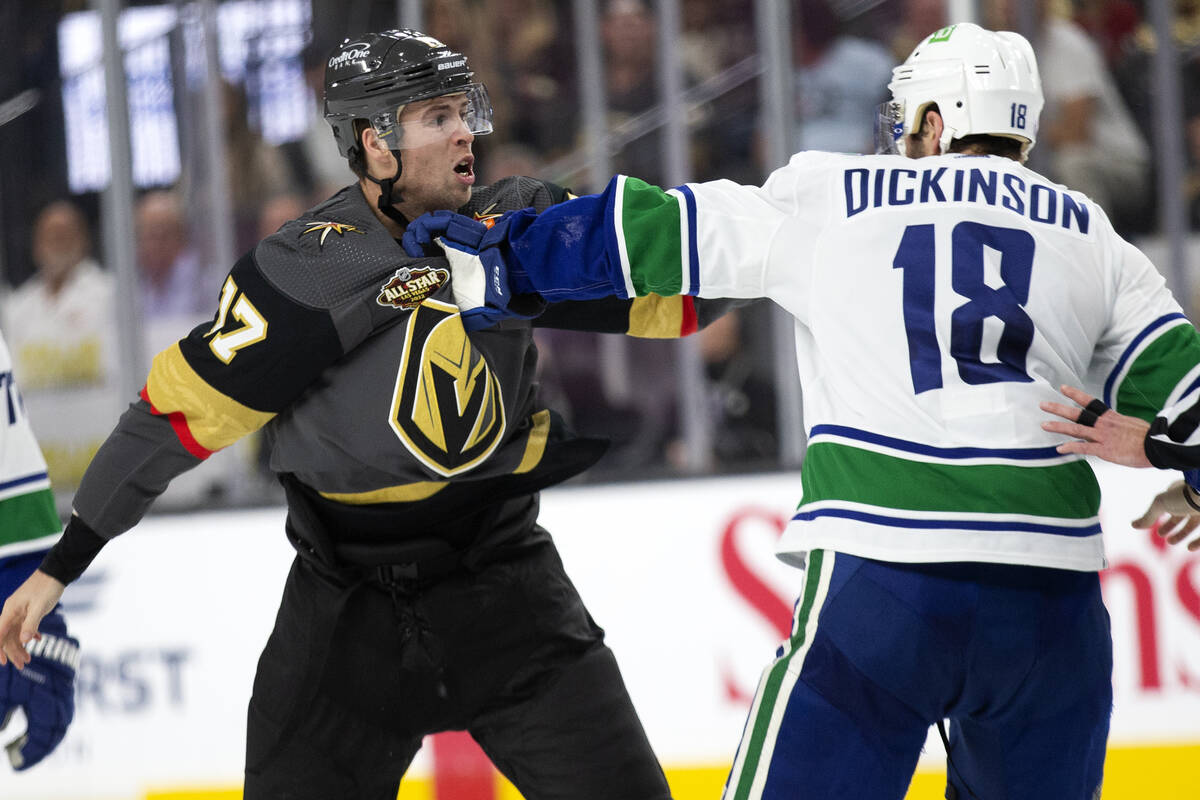 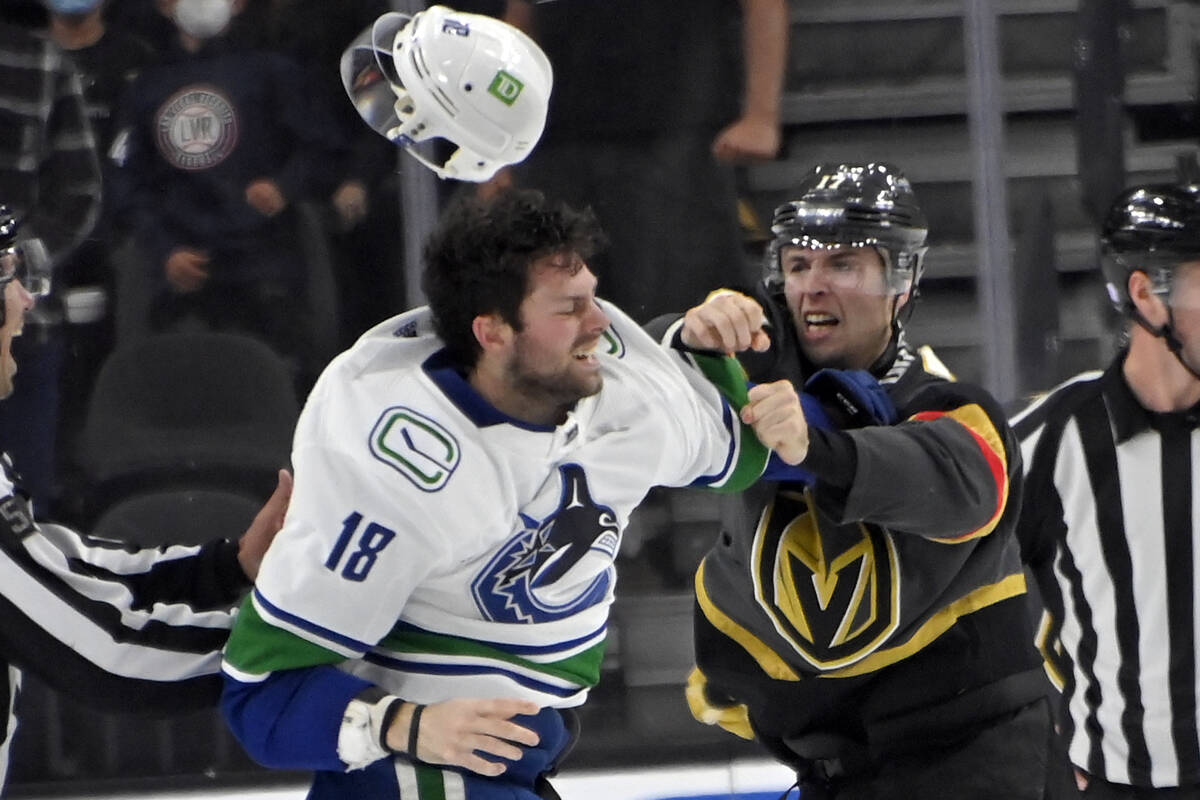 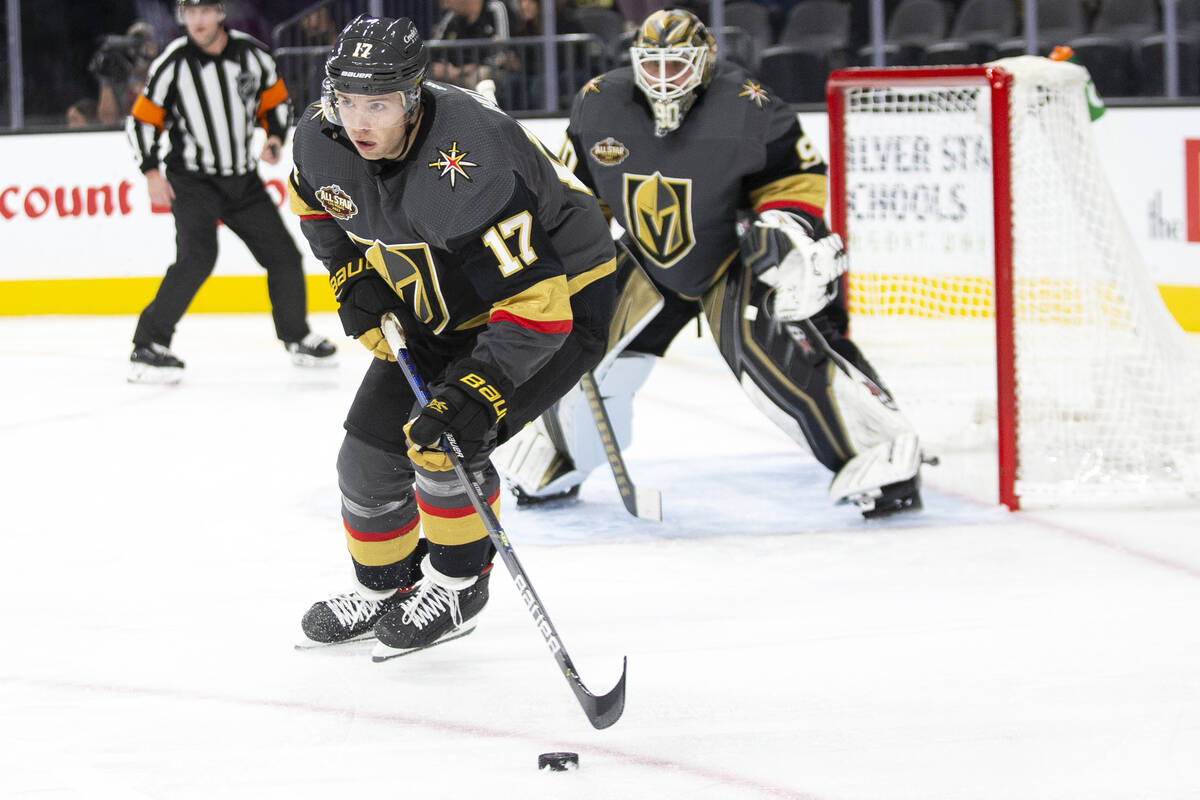 Golden Knights defenseman Ben Hutton (17) skates with the puck as goaltender Robin Lehner (90) guards the goal behind him during the second period of a NHL hockey game on Saturday, Nov. 13, 2021, at T-Mobile Arena, in Las Vegas. (Ellen Schmidt/Las Vegas Review-Journal) @ellenschmidttt

“I didn’t think I was going to fight that many times this early,” he said.

That’s right. The wide-smiling, “Barbie Girl” singing defenseman the team signed Oct. 28 already has two fights in his first five games. He had four in his first 379 in the NHL.

That’s far from the only thing Hutton has brought to the table, however. The 28-year-old has given the Knights important blue-line depth and seems to be settling in heading into Wednesday’s game against the Nashville Predators.

“I’ve liked his competitiveness,” coach Pete DeBoer said. “He’s brought something to our group. (Brayden McNabb’s) got some of that bite to his game, but Ben’s brought that. I think every game, he’s gotten a little more comfortable, played a little bit better.”

Hutton signed with the Knights when they were in need of immediate experienced depth after defenseman Zach Whitecloud needed hand surgery following an Oct. 22 blocked shot. His presence became even more important when defenseman Alec Martinez suffered a face laceration Nov. 11 against Minnesota.

Hutton was in the next game against Vancouver and hasn’t left the lineup since. It’s clear the veteran is starting to win some trust from the coaching staff.

He played 9:28 and got 14 shifts his first game. He played 17:46 in 22 shifts Monday against St. Louis. He’s started 10 shifts in the offensive zone and nine in the defensive zone at five-on-five, showing the team isn’t going out of its way to shelter him.

The largest statement came Monday. When defenseman Shea Theodore came back from injury, Hutton stayed in the lineup and defenseman Dylan Coghlan was taken out.

“It’s not easy to just come into a team and get thrown into games,” defenseman Alex Pietrangelo said. “(He’s) certainly been impressive. That’s why you bring guys in like that, guys with experience. They can hop in anytime into the lineup regardless of the situation and they can have an impact.”

Hutton has made an impression in a variety of ways. There have been the two fights and the five hits he’s delivered. He’s also been active offensively with five shots on goal and two assists.

Monday he made a sharp pass through the neutral zone that sprung right wing Reilly Smith for a breakaway. He also drew a penalty skating down into the slot in the second period.

“The coaches aren’t afraid to give the guys on the back end the green light to jump up,” Hutton said. “The few games that I’ve been in, I’ve tried to make the most of my opportunity and jump up and help out when I can.”

What he’s still working through is tightening up his defensive-zone coverage after not having a training camp to fully learn the Knights’ systems. He’s been talking to partners Coghlan and Whitecloud often, along with veterans like Pietrangelo, to make sure he’s where he’s supposed to be and playing things correctly.

He’s done well so far for a guy who’s been with the team less than a month. He’s looking to keep building off that so he can stay in and hold onto his lineup spot.

“It definitely takes a little bit longer than going through training camp and stuff like that,” Hutton said. “With training camp, you kind of break down the systems and you get everyone kind of used to what the coaches want. Jumping in a little bit later, it’s obviously a little more challenging. But at the end of the day, it is still hockey.”