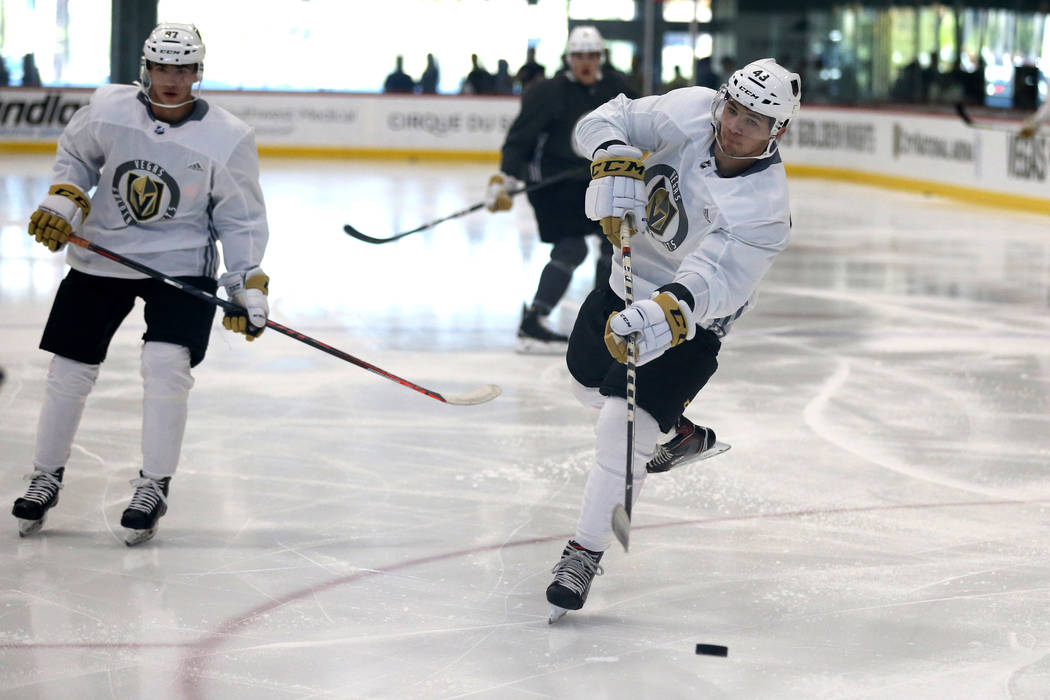 IRVINE, Calif. — The Golden Knights have established a pattern of patience with their prospects. As president of hockey operations George McPhee famously said, they’d prefer to “overcook” rather than rush their young players.

Cotter got a head start on his professional career last season when he abruptly left college to play major-juniors in Canada.

Now the fourth-round pick from the 2018 draft is hoping to make the Knights’ minor league affiliate rather than return to his major-junior club in the Ontario Hockey League.

Cotter was credited with three shots on goal Saturday during the Knights’ 5-2 loss to the Colorado Avalanche in the Anaheim Rookie Faceoff at Great Park Ice & FivePoint Arena.

The Knights continue the tournament at 3 p.m. Sunday against the Arizona Coyotes.

“Everybody’s goal is to make Vegas. It might be a smaller percentage chance with us younger guys, but the big goal for me is to make Chicago (American Hockey League),” Cotter said. “I’m sure along the road here I’ll get feedback from the management, coaches and stuff like that. I’m unfamiliar with the process, so I’m just kind of going with the flow right now until I hear something. Whatever Vegas wants, I’ll do.”

Cotter was one of the standouts at Knights’ development camp after he was drafted, and he began last season as a touted freshman at Western Michigan.

But Cotter left the program in November after recording one assist in eight games and signed with London of the OHL.

Cotter finished with nine goals and 17 assists in 48 games for London and was held without a point in 11 postseason games.

The Knights signed Cotter to a three-year, entry-level contract Dec. 28.

“Toward the end of the year, I started to figure it out a little bit and started to do a little bit better,” Cotter said. “The transition was tough. Obviously moving league to league isn’t the easiest, but it had to be done and it’s a signed (NHL) contract at the end of the day, so it was really cool to do that.”

Cotter was not eligible to participate in training camp last season as a college player and missed the Knights’ development camp in June because of appendicitis.

The 6-foot, 191-pound center skated on the third line against Colorado on Saturday and helped the Knights successfully kill two first-period penalties.

“I haven’t been out there in a while in Vegas, so I think it’s kind of a question mark with me right now to see, ‘Did he get better? Did he get faster? Stronger?’ ” Cotter said. “I’m just excited to play, kind of open a few eyes. People are going to say, ‘Yeah, he did get a lot better.’ I’m just looking forward to getting out there and doing my thing.”

Cotter turns 20 on Nov. 16 and is eligible to play in the AHL, according to general manager Kelly McCrimmon.

He will participate in training camp and could play at least one preseason game to show management whether he is ready for the AHL or needs another season in major-juniors.