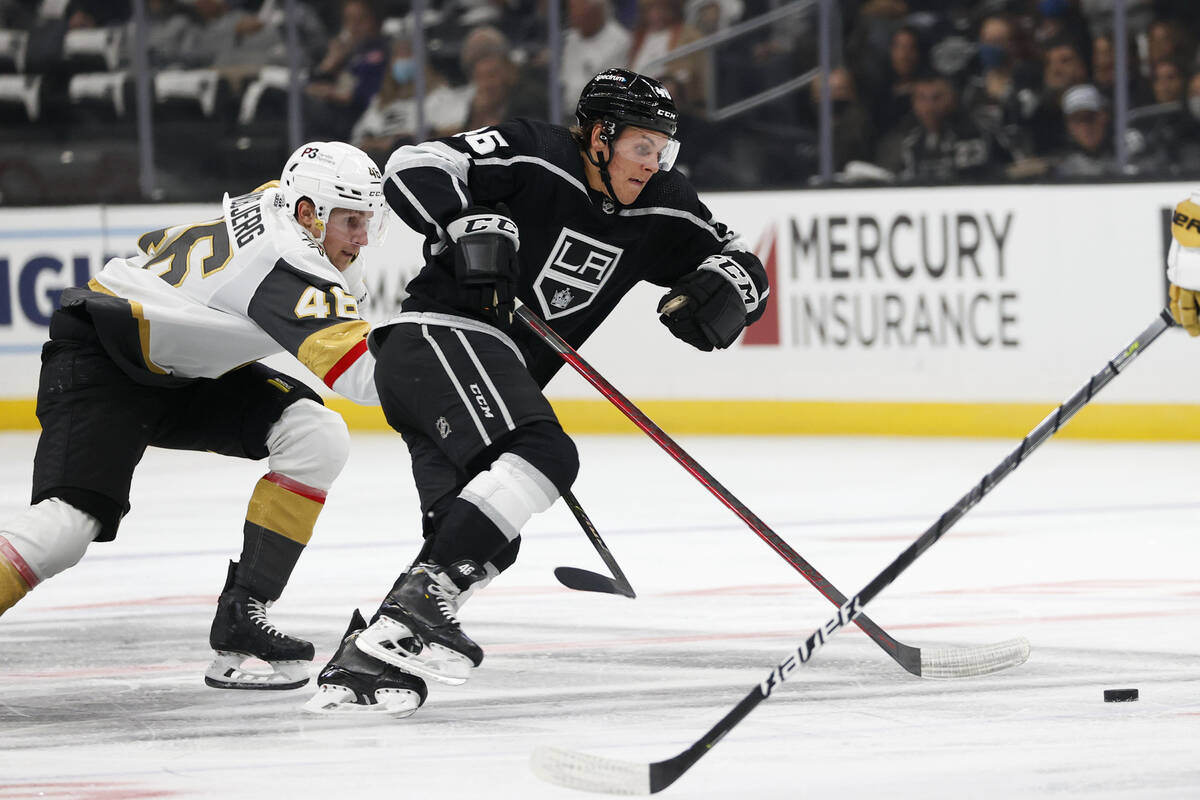 LOS ANGELES — Jonas Rondbjerg’s parents were unable to travel from Denmark to see his NHL debut for the Golden Knights on Thursday.

No need to worry. He was temporarily adopted by Jake Leschyshyn’s family.

“His family is coming in, and they were kind of sad that my family couldn’t get in, so they talked about that a little bit,” Rondbjerg said after the morning skate.

Leschyshyn and Rondbjerg, both forwards, were in the lineup for the first time when the Knights faced the Los Angeles Kings at Staples Center after being recalled Wednesday from the Silver Knights.

“They’re both excited, and they deserve to be here,” coach Pete DeBoer said of Leschyshyn and Rondbjerg. “We needed two spots filled, and those guys earned that opportunity on merit and the camps they had.”

Leschyshyn was a second-round draft pick by the Knights in 2017 and worked his way back from a torn ACL he sustained in February of that year. He posted six goals and 11 points in 39 games for the Silver Knights last season, his second full year in the American Hockey League.

Leschyshyn said his parents, his girlfriend and his sister Kate made the trip. His other sister, Anna, is in school at Syracuse and unable to attend. Leschyshyn’s father, Curtis, appeared in more than 1,000 NHL games for seven teams.

“It’s been a long time coming to this point, for sure,” Leschyshyn said. “I know I’ve worked hard, and there have been a lot of people who also worked hard to help me get here. It’s exciting.”

Rondbjerg’s parents had to wake up early for the game, which started at 4:30 a.m. in Horsholm, Denmark, outside of Copenhagen.

“They’ll have a morning coffee and watch me play,” Rondbjerg said.

Rondbjerg was injured in the season opener in 2019 and missed the remainder of the season with the Chicago Wolves. He returned last season and finished with six goals and 13 points in 38 games with the Silver Knights.

“I think I’ve been consistent doing my job out there, playing hard, playing the right way,” said Rondbjerg, a third-round pick in 2017. “I’m going to keep doing that.”

Knights up in value

The Knights are ranked as the 12th-most valuable franchise in the NHL by Sportico.

After paying a $500 million expansion fee to enter the league in 2017, the franchise is now worth $890 million.

The Toronto Maple Leafs are the most valuable franchise at $2 billion, followed by the New York Rangers ($1.87 billion) and the Montreal Canadiens ($1.58 billion).

Ten franchises are valued at more than $1 billion.