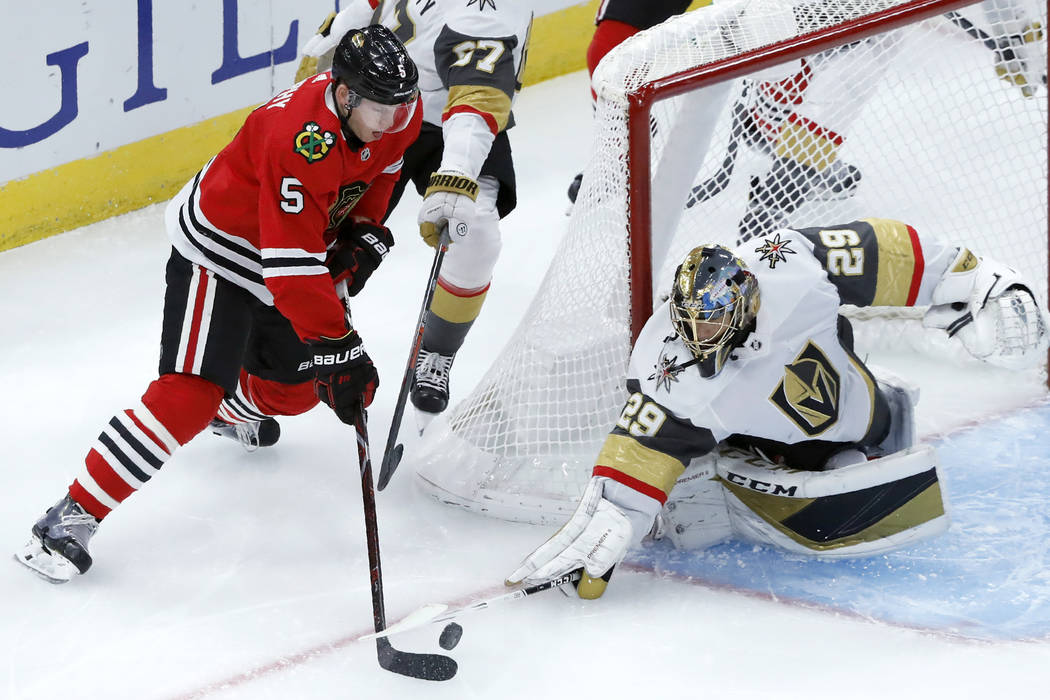 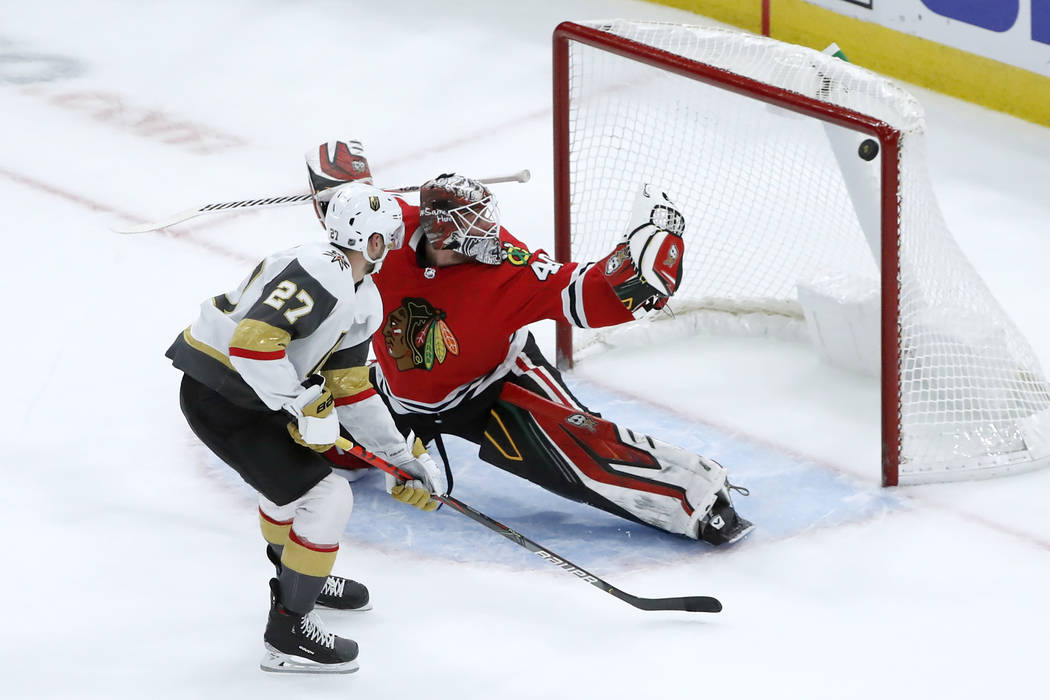 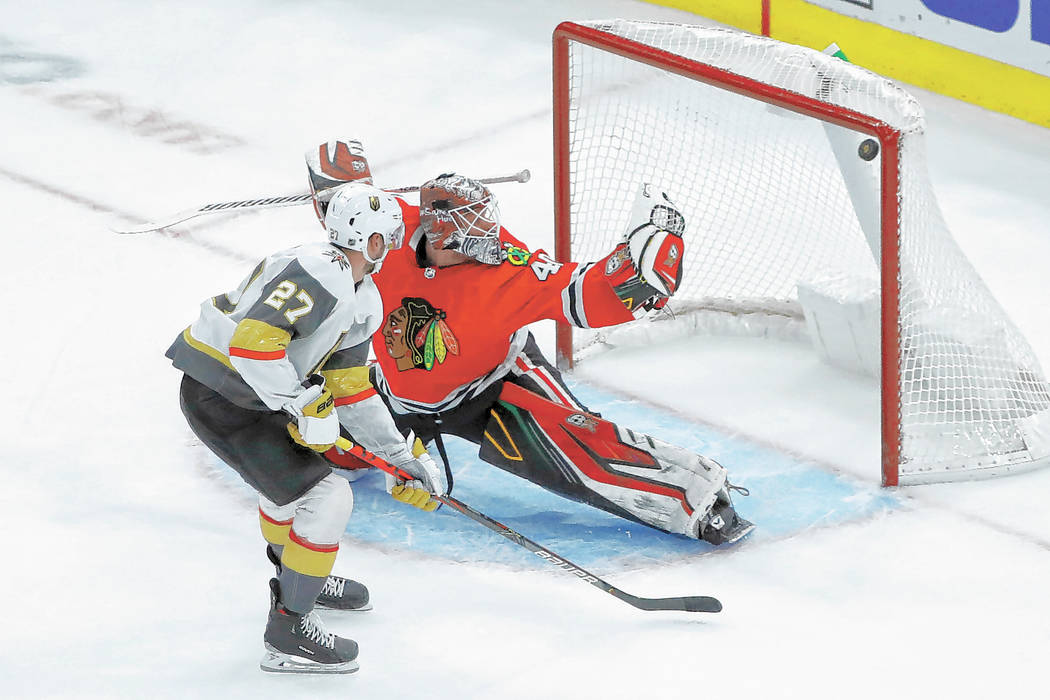 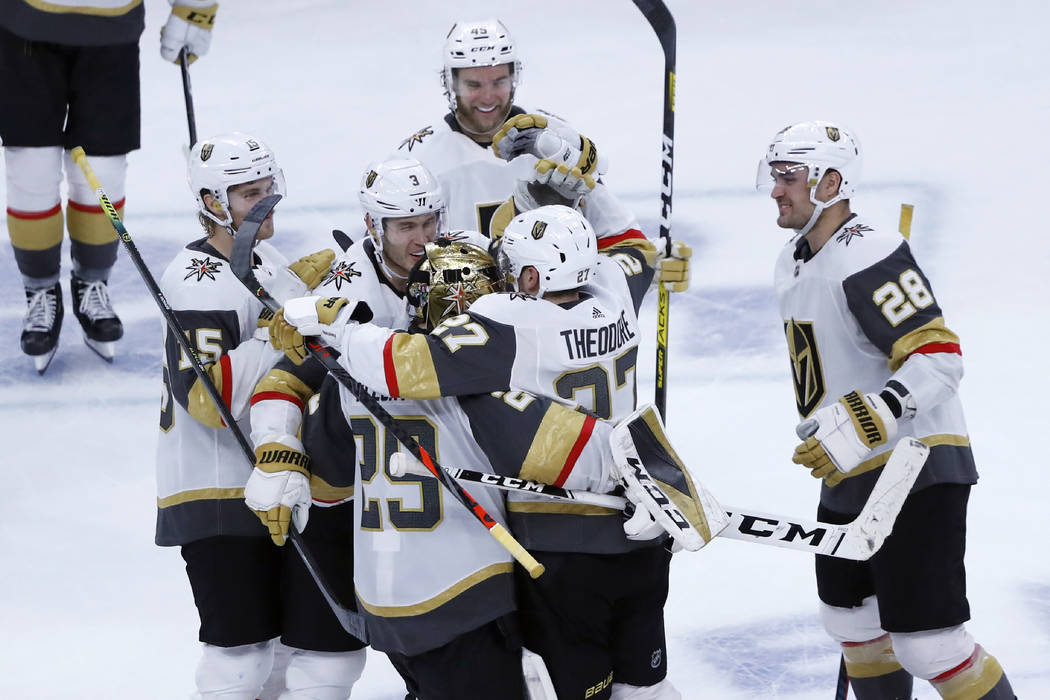 CHICAGO — It’s funny how quickly a narrative can change.

The Golden Knights were on the verge of a disappointing road trip while struggling to find their identity. Instead, they left United Center taking four of a possible six points from the trip and with a renewed sense of confidence.

Defenseman Nick Holden scored the tying goal with 1:33 remaining in regulation, and the Knights went on to a character-building 2-1 shootout victory over the Chicago Blackhawks on Monday.

“I think this is something you can feed off where we faced some adversity that we needed to make sure we pushed,” Holden said. “It was a big challenge, and I thought our team did a good job responding and elevating our game to stay in the game.”

Shea Theodore and Jonathan Marchessault scored in the shootout for the Knights.

Goaltender Marc-Andre Fleury made 31 saves and gave his team a chance to steal the two points. He turned away Patrick Kane and Alex DeBrincat in the shootout after Jonathan Toews scored in the first round.

“I think we owe him a team dinner,” Theodore said. “The games he’s been playing have been unbelievable and it’s just a thrill to watch.”

The Knights improved to 7-0 all time against Blackhawks.

Here’s what else stood out in the Knights’ win:

Fleury and Chicago’s Robin Lehner went save for save to the delight of the announced crowd of 21,172.

Fleury, who earned his league-leading seventh victory, stacked his pads to deny Kane in the first period and dived across his crease after losing his stick to stop Alex DeBrincat’s drive.

It also was career victory No. 446 for Fleury, moving him into seventh place on the NHL all-time list, one better than Terry Sawchuk.

Lehner had 17 of his 34 stops in the third period and overtime, as the Knights made a strong push.

The Vezina Trophy finalist last season also pulled off a two-pad stack to prevent Max Pacioretty from winning it late in overtime.

“The standings are going to be close till the end of the season, and it’s tough to make the playoffs,” Fleury said. “Those points we get there are important. I thought our game got better as the game went on, and we played a solid third period.”

Coach Gerard Gallant started the game with the same lines he finished with in Philadelphia on Monday. But he went back to the familiar top six at the start of the second period while swapping left wings Brandon Pirri and William Carrier on the third and fourth lines.

After the move, the Knights finally started to establish a forecheck and Carrier ignited the third line, especially. He had a breakaway late in the second with a chance to tie the game but was unable to convert.

It also helped that the Knights stayed out of the penalty box after taking four penalties in the first two periods. Defenseman Brayden McNabb was penalized twice and leads the NHL with 11 minor penalties.

”I think we just simplified a couple things,” Theodore said. “I thought we played slow to start and we were trying to get a little too cute in that second period. We were keeping things simple and getting back to the basics, and it worked out.”

The last time Ryan Carpenter faced the Knights, he was a member of the San Jose Sharks. This time was a little different.

Carpenter, who signed with Chicago as a free agent after two seasons with the Knights, was handed the start against his former club and spearheaded a penalty-killing unit that went 4-for-4.

He logged a career-high 17:50 of ice time and also set up Brandon Saad for a prime chance with about six minutes remaining in the second after taking the puck from William Karlsson.