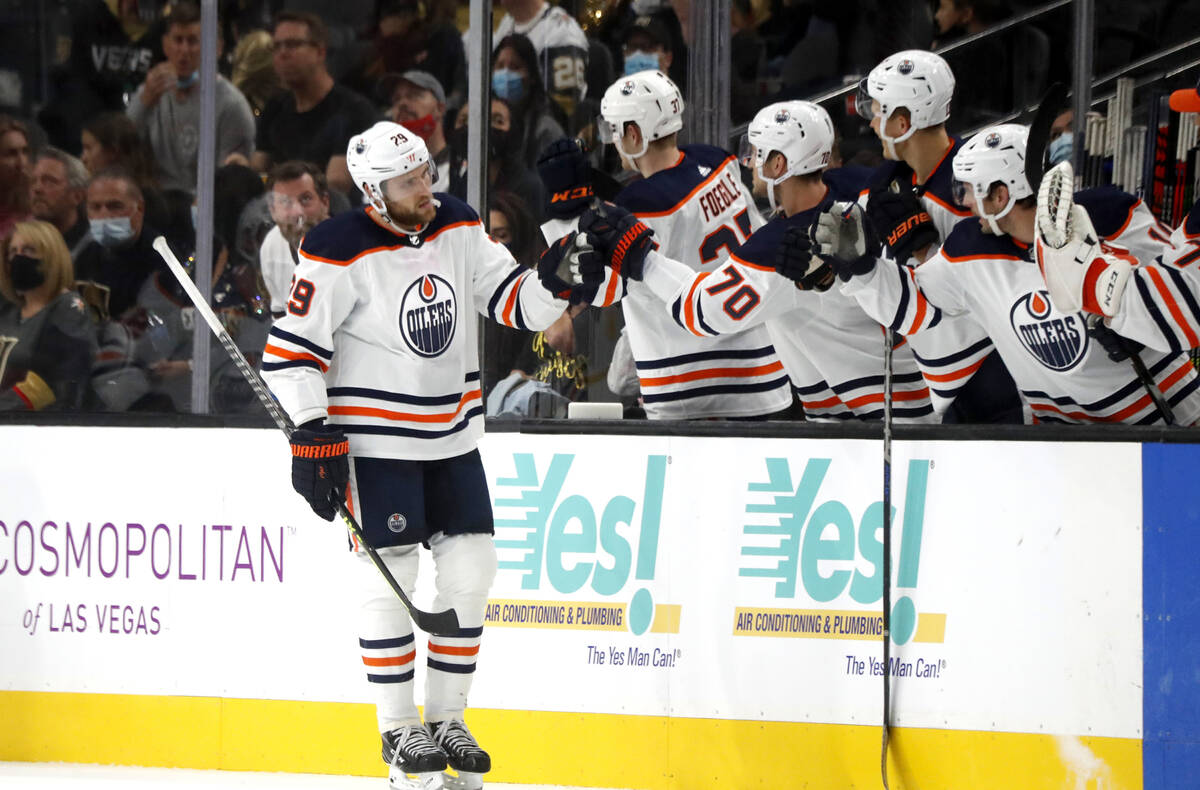 Edmonton Oilers center Leon Draisaitl (29) is congratulated by teammates after scoring during the second period of an NHL hockey game against the Vegas Golden Knights, Friday, Oct. 22, 2021, in Las Vegas. (AP Photo/Steve Marcus)

3. Oilers center Connor McDavid — The reigning Hart Trophy winner had two assists, drew a penalty and nearly scored when he hit the post on a power play. His 13 points in five games lead the NHL.

2. Oilers left wing Zach Hyman — The hardworking first liner had two goals, giving him five on the season. That’s tied for the third-most in the NHL. His second was a rocket that beat goaltender Robin Lehner.

1. Oilers center Leon Draisaitl — The 2019-20 Hart Trophy had two goals and an assist to give himself 11 points in five games. He scored the empty-net goal that sealed Edmonton’s win.

The Knights finished the second period strong despite trailing 3-2 and tied the score quickly in the third with defenseman Nic Hague’s first goal. At that point, they had nine of the last 11 shots on goal.

But the Knights turned the puck over in the neutral zone soon after Hague’s goal, and Kassian got a breakaway. He beat Lehner with a backhand move to put the Oilers back on top just as his team looked to be losing control.

0-for-9 — The Knights’ success rate on the power play through four games. They’re the only team in the NHL without a power-play goal.

They had their chances Friday. They had a five-on-three for 1:41 of the first period when Edmonton defensemen Tyson Barrie and Darnell Nurse went to the penalty box in quick succession. But the Knights put only one shot on goal from the time the second penalty was called to when both expired. They also had three shots blocked, and one missed the net.

The team’s usual leadership group includes captain Mark Stone and alternates Alex Pietrangelo and Reilly Smith. Defenseman Alec Martinez wore an “A” in Wednesday’s game against the St. Louis Blues with Stone out, only to get hurt in the third period. Marchessault stepped in and got the “A” Friday.

The Knights and Oilers presented Kozari with autographed jerseys with the number 1,000 to celebrate his accomplishment.

The Knights’ TV broadcast on AT&T SportsNet Rocky Mountain had technical difficulties in the third period.

It cut out before Hague tied the score 3-3, and Kassian untied it to give the Oilers a 4-3 lead. It came back just before Draisaitl’s final goal.