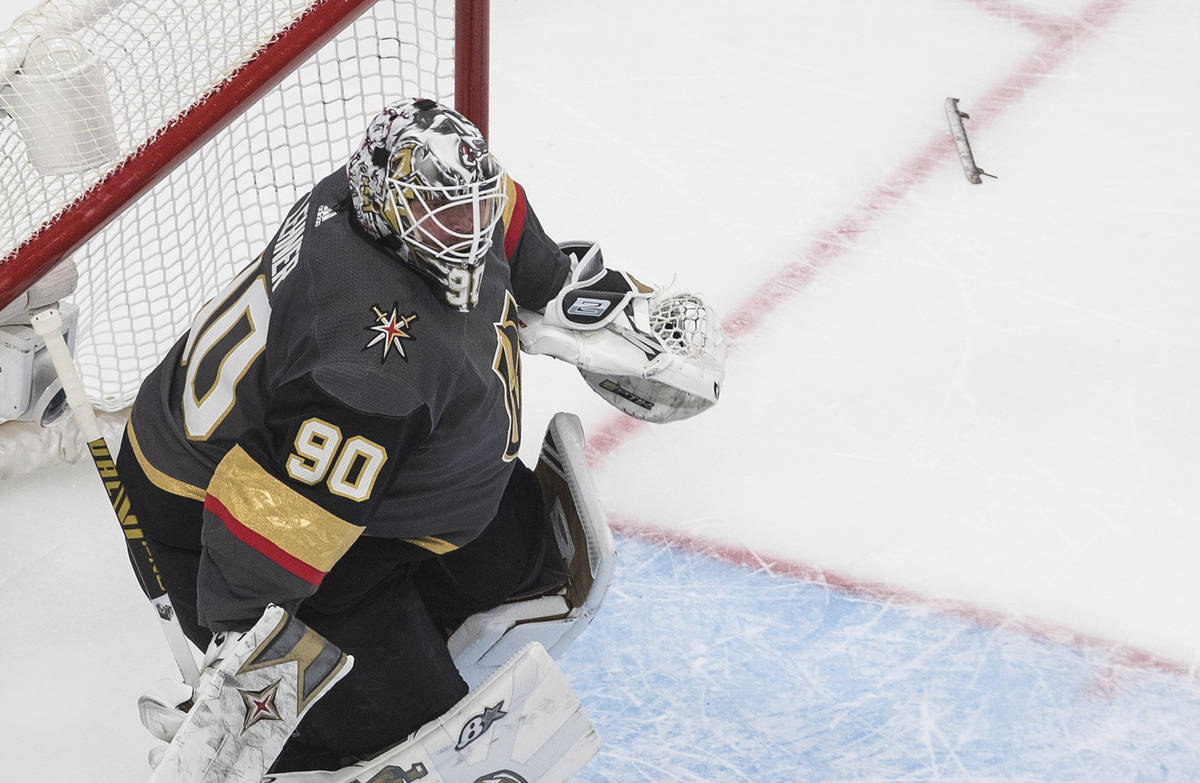 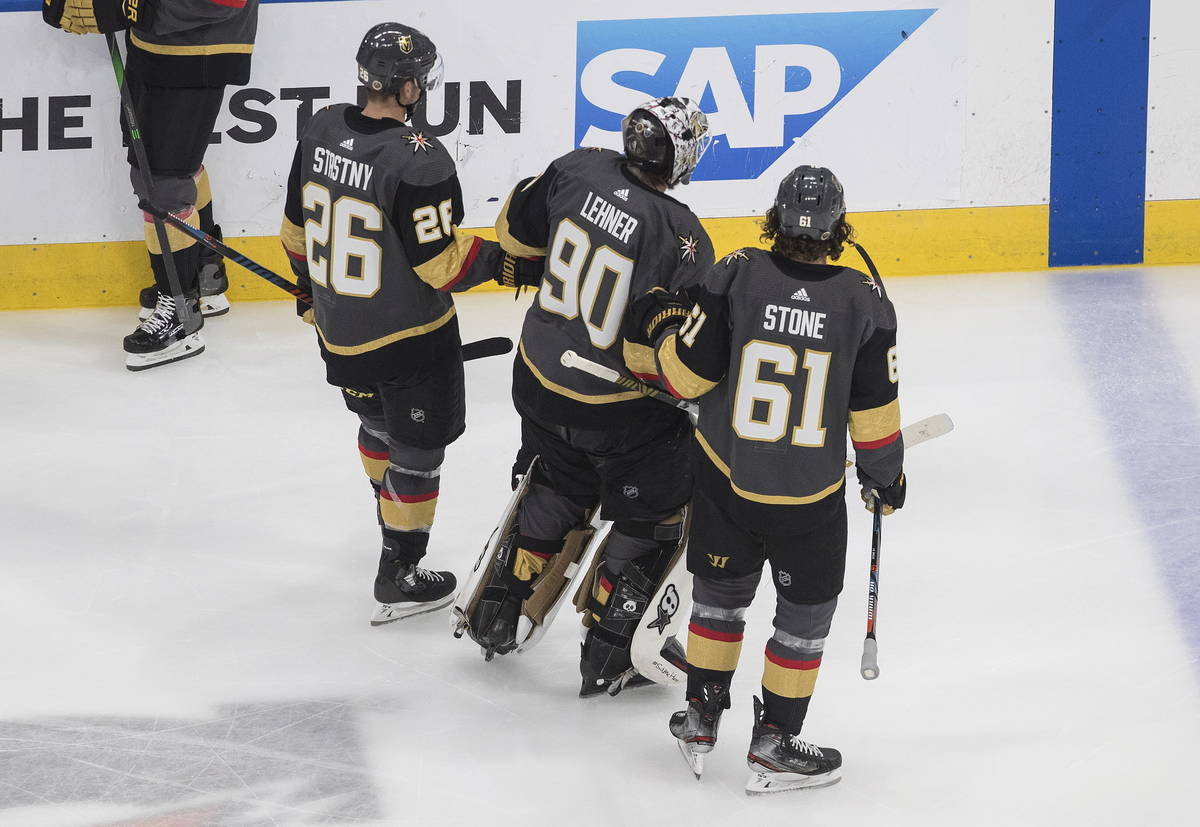 Vegas Golden Knights goalie Robin Lehner (90) is helped to the bench by Mark Stone (61) and Paul Stastny (26) after losing a skate blade during the second period against the Chicago Blackhawks in Game 1 of an NHL hockey Stanley Cup first-round playoff series, Tuesday, Aug. 11, 2020, in Edmonton, Alberta. (Jason Franson/The Canadian Press via AP)

The Knights’ studio analyst and former professional goaltender had his blade fall out of his skate twice. But never in a game or in the playoffs.

That’s why he couldn’t help but admire the resolve Lehner showed during his two second-period equipment malfunctions in Game 1 of the Western Conference quarterfinals. Lehner lost his left blade twice, yet kept his composure. The Chicago Blackhawks didn’t score either time the goaltender was skating on one leg in their 4-1 loss.

The Knights are hoping for more of the same in Game 2 of their first-round series Thursday in Edmonton, Alberta. Albeit, with a new set of skates for Lehner.

“He was in one,” said McKenna, who thought a screw that was supposed to be holding Lehner’s blade in place wasn’t working properly. “What was amazing, though, to me was first he was battling really hard, but it was ingenious that he used the toe to dig in and be able to at least have balance and move around the crease a little bit. I don’t think that ever crossed my mind when I lost my blade in practice.”

Lehner’s blade first popped out when it hit the left post two minutes into the second period. He played with one skate for 32 seconds until there was a whistle, then got a tuneup from the Knights’ bench.

Then, 13:31 later, it happened again. This time the team was on the penalty kill and needed to survive 51 seconds of play before a stoppage allowed for repairs. Officials didn’t stop the play because, according to NHL rule 14.1, “no delay shall be permitted for the repair or adjustment of goalkeeper’s equipment.”

Coach Pete DeBoer said he had never seen it. And he sure hadn’t seen it twice.

Rask loses the blade on his skate and the Lightning score pic.twitter.com/FAxzOV4qST

Arizona Coyotes goalie Antti Raanta lost his right blade ranging to his left in October and allowed a goal on a wide-open net.

“I took the walk of shame back to the bench,” Raanta told the Arizona Republic. “Although it was really more like a slide of shame.”

It’s only possible because of new developments in equipment. McKenna said five or six years ago quick-release blades came into fashion that allowed for easy skate repairs on the bench. If a goalie lost an edge, the equipment manager could have a fresh set of steel ready to go and exchange the old blade for a new one quickly.

McKenna said about 90 percent of goalies now wear those kind of skates. He used to wear a True boot with a Bauer bladeholder and steel. Lehner wears a one-piece True skate made of carbon fiber.

About 70 percent of NHL goaltenders use True skates, according to the website GearGeek.com. Knights goalie Marc-Andre Fleury uses CCM.

“It was a big step for a lot of people to go to that, but I think everybody now is largely seeing the advantage of, one, being able to change your blade so quickly,” McKenna said. “And, two, the increased attack angle that you have without a cowling and the weight. It’s way lighter.”

With these new skates, McKenna said he would go through one pair a year but four to six blades. He would change the steel every three to four weeks.

Lehner is even more loyal to his equipment. He had worn the same pair of skates for four years before using a new pair in practice Wednesday. He’s an equipment manager’s dream. He likes to sharpen his blades only once a year, too.

Guess I have to get new ones.. might as well sharpen them too. 🐼 pic.twitter.com/KVCsfNZGYk

The Knights hope his new skates will last him as long as his previous pair, or at least for the remainder of the postseason. He looked pretty good Tuesday. He could be even better if he didn’t have to worry about his equipment.

“I thought he was real solid,” DeBoer said. “I didn’t think he could do anything on the one that got by him. He made a couple big saves at key moments in that game.”