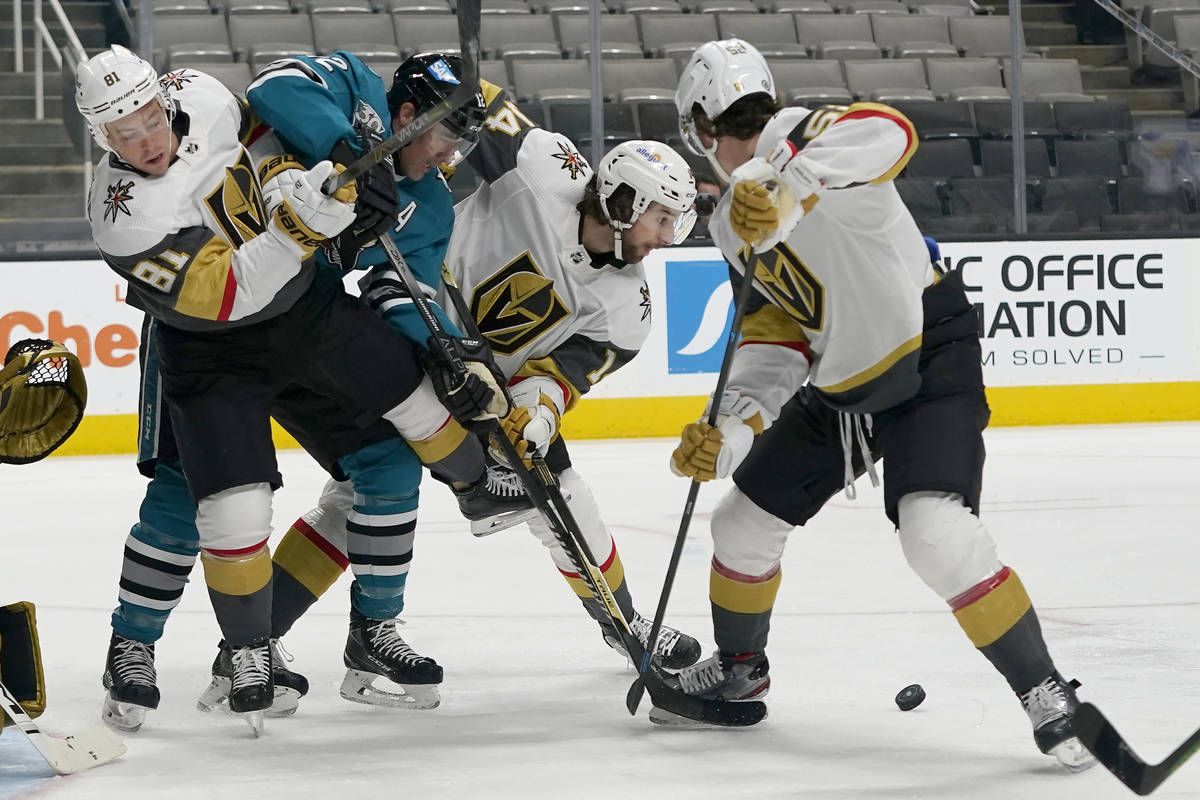 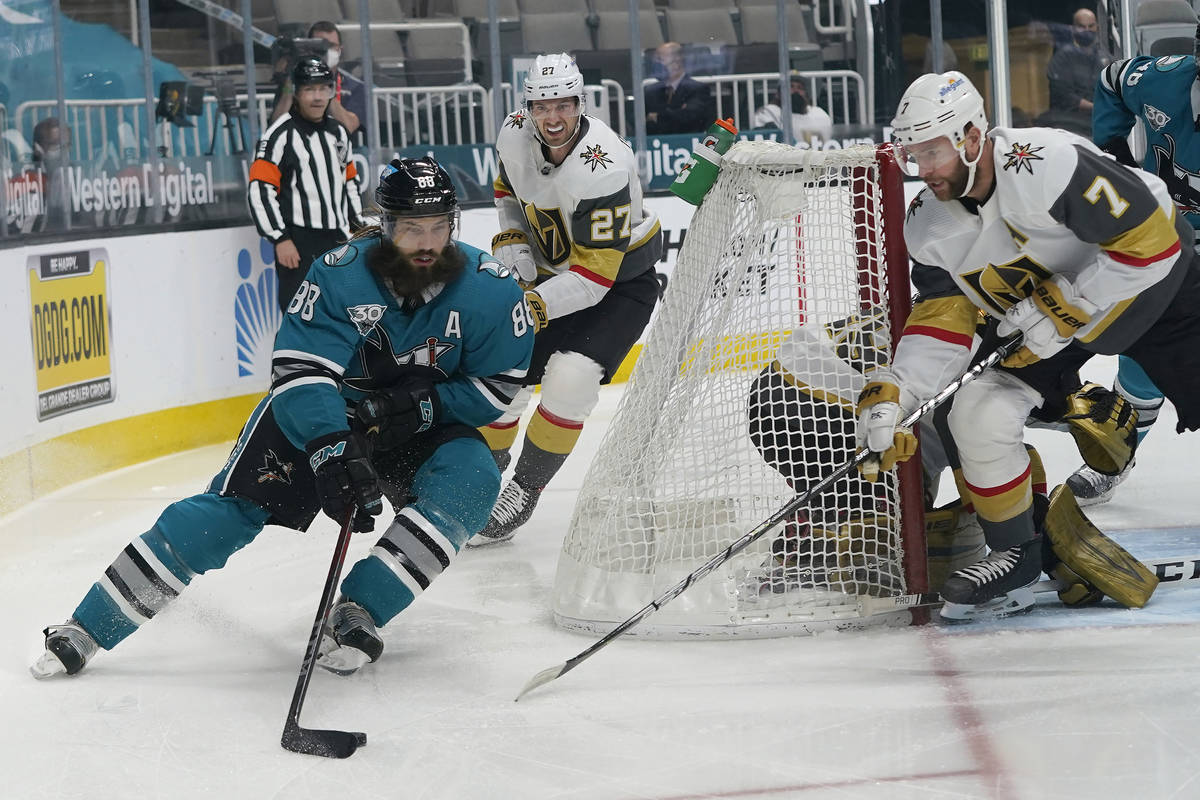 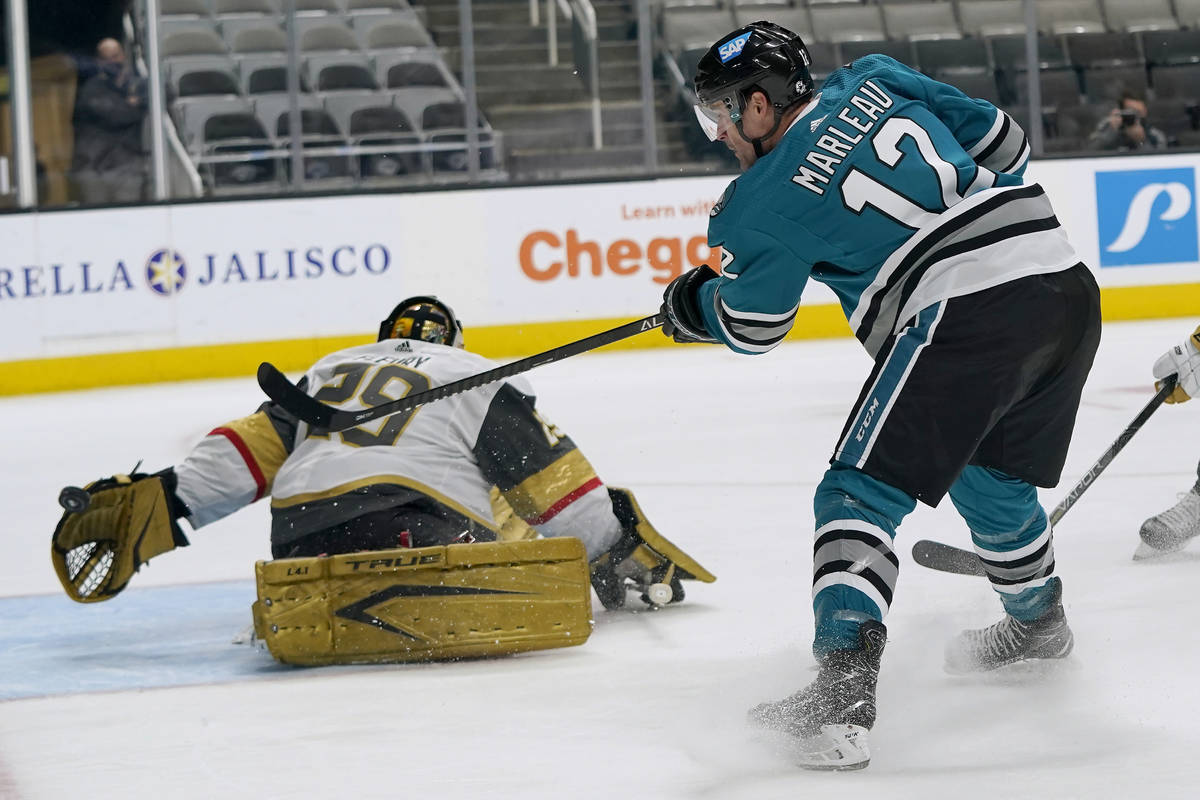 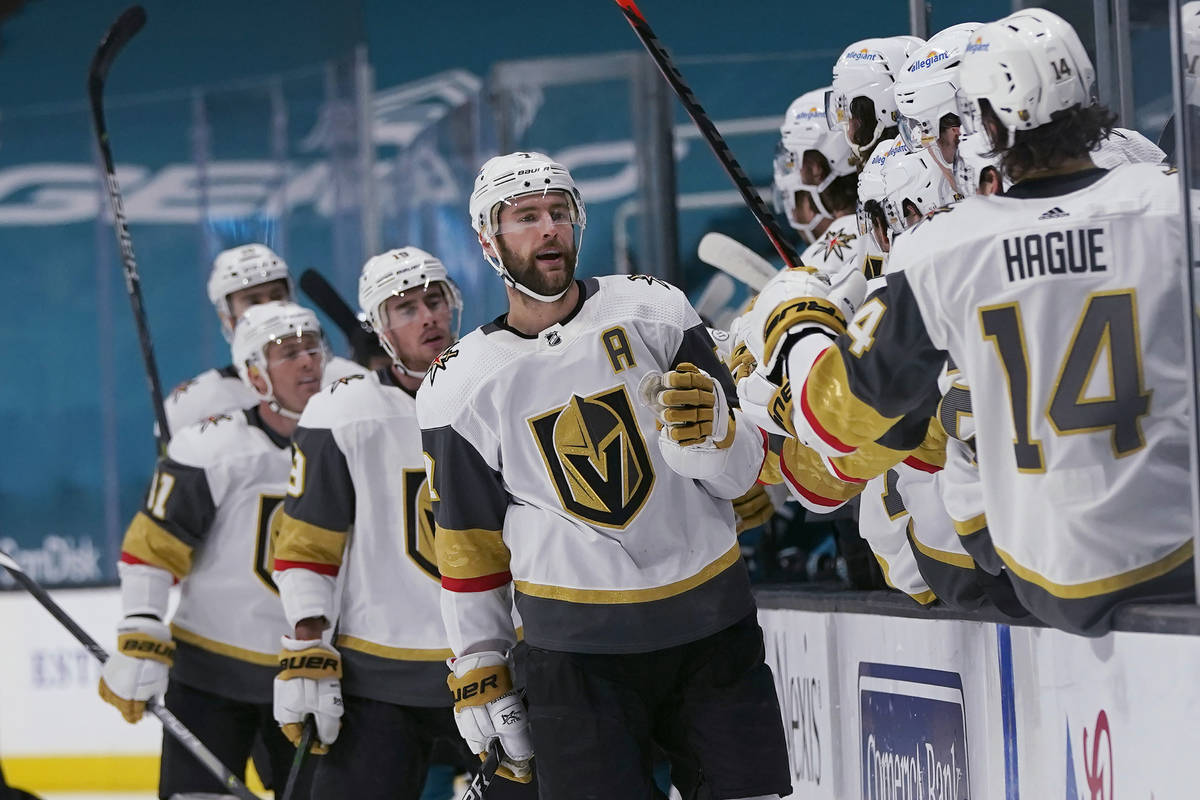 Vegas Golden Knights defenseman Alex Pietrangelo, middle, is congratulated by teammates after scoring against the San Jose Sharks during the first period of an NHL hockey game in San Jose, Calif., Wednesday, May 12, 2021. (AP Photo/Jeff Chiu) 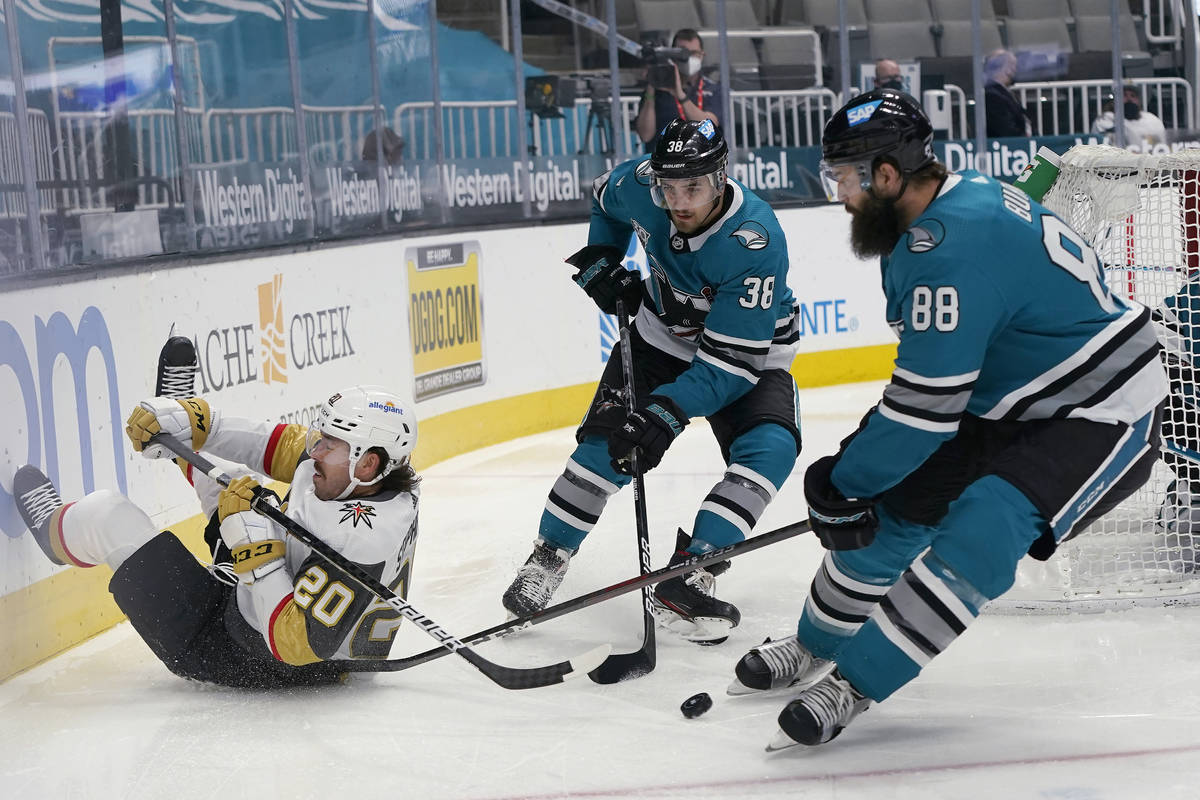 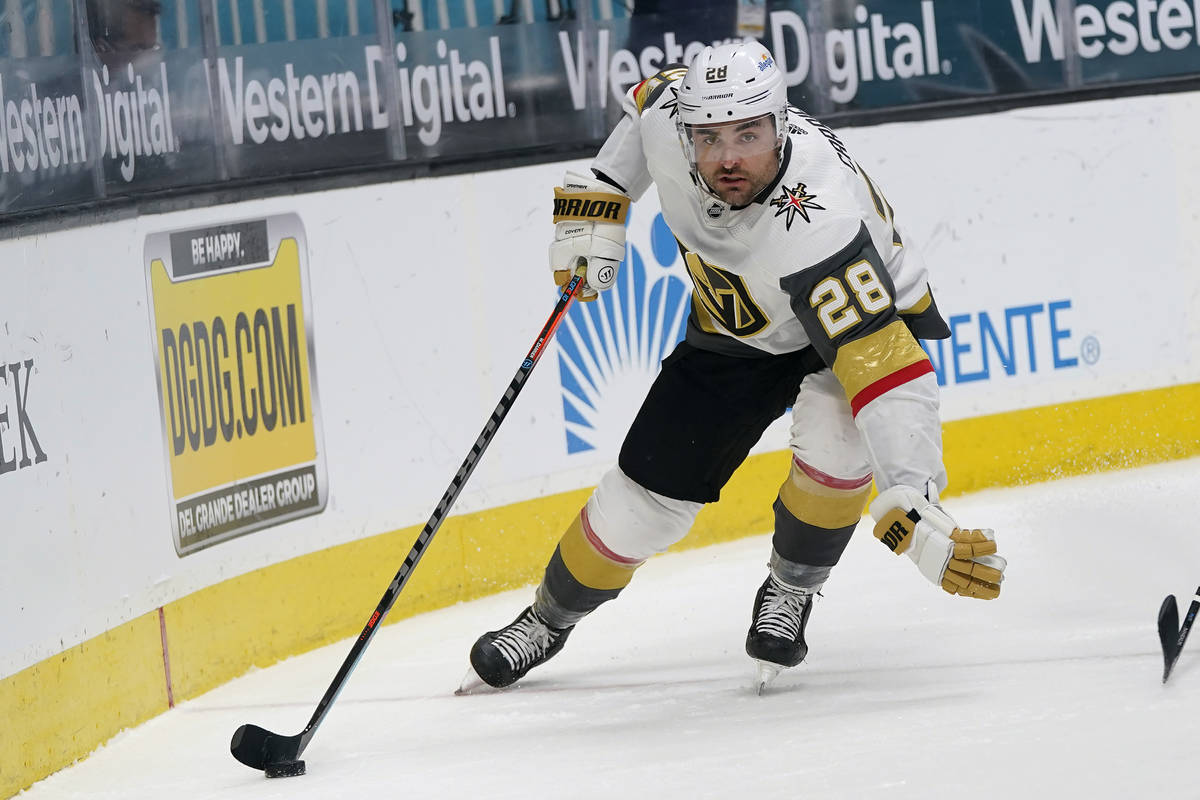 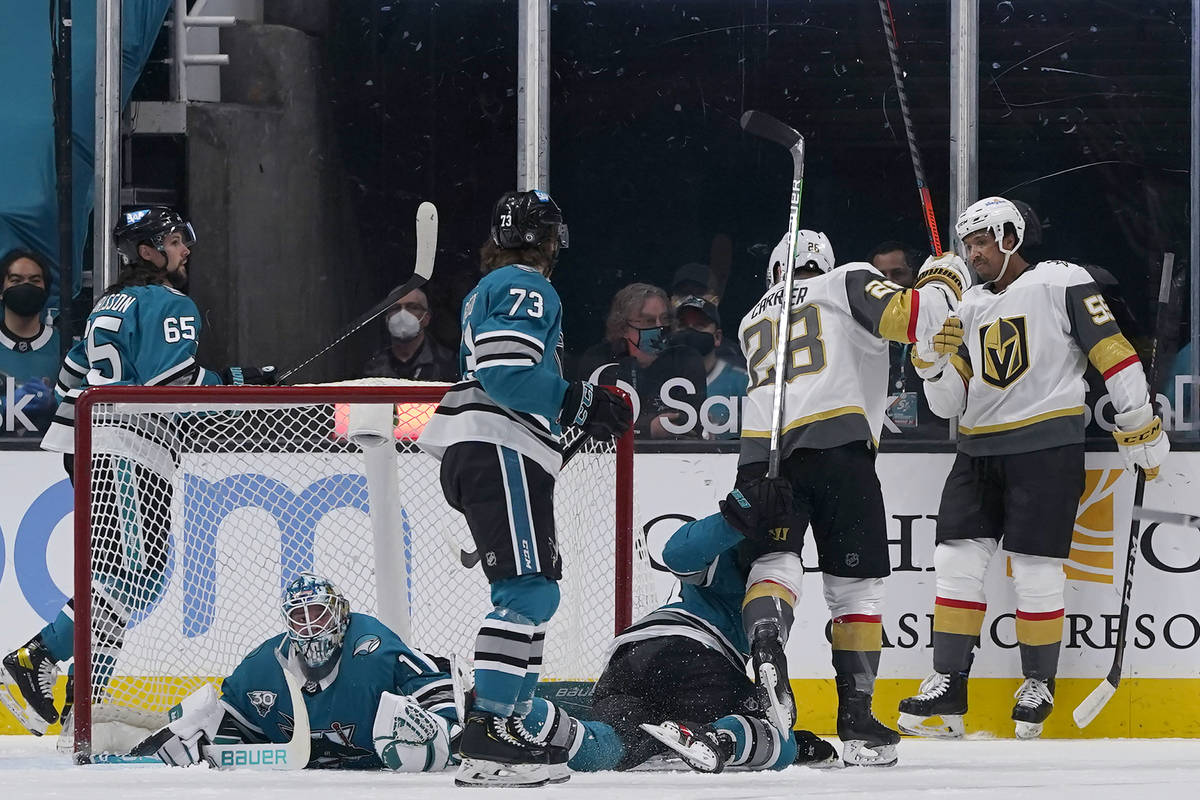 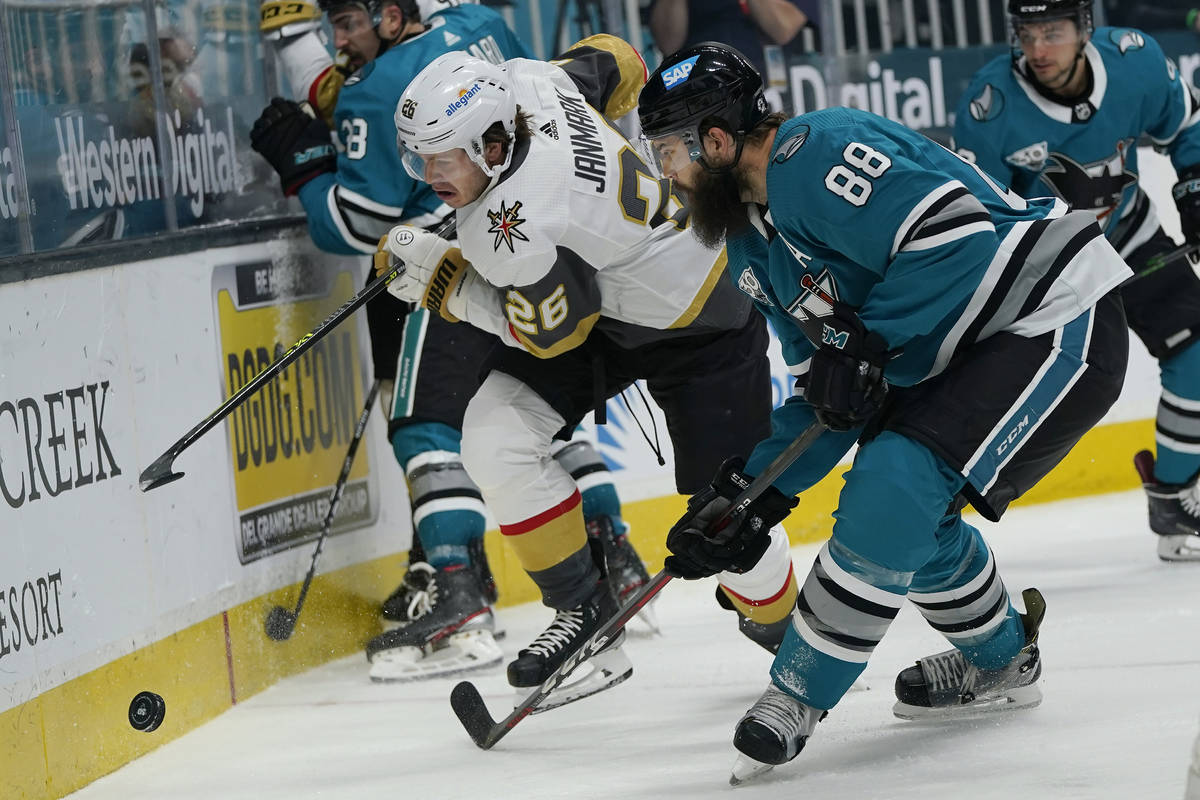 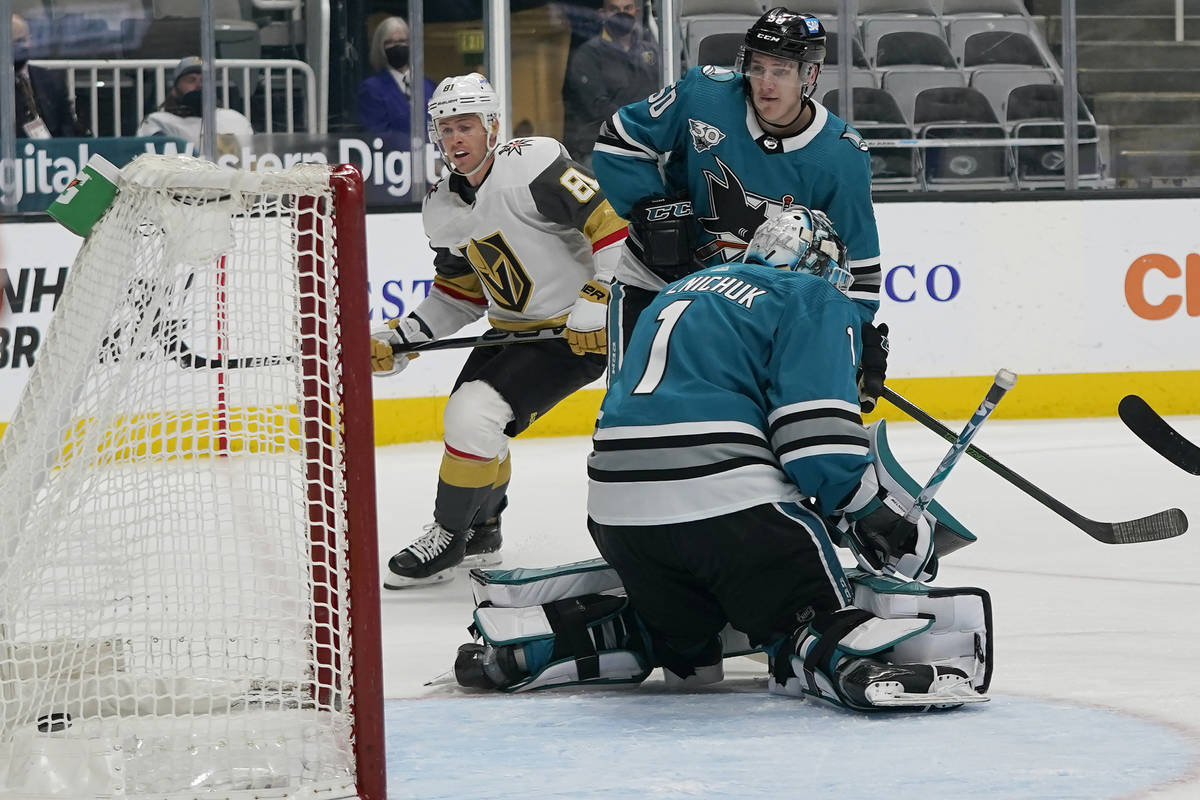 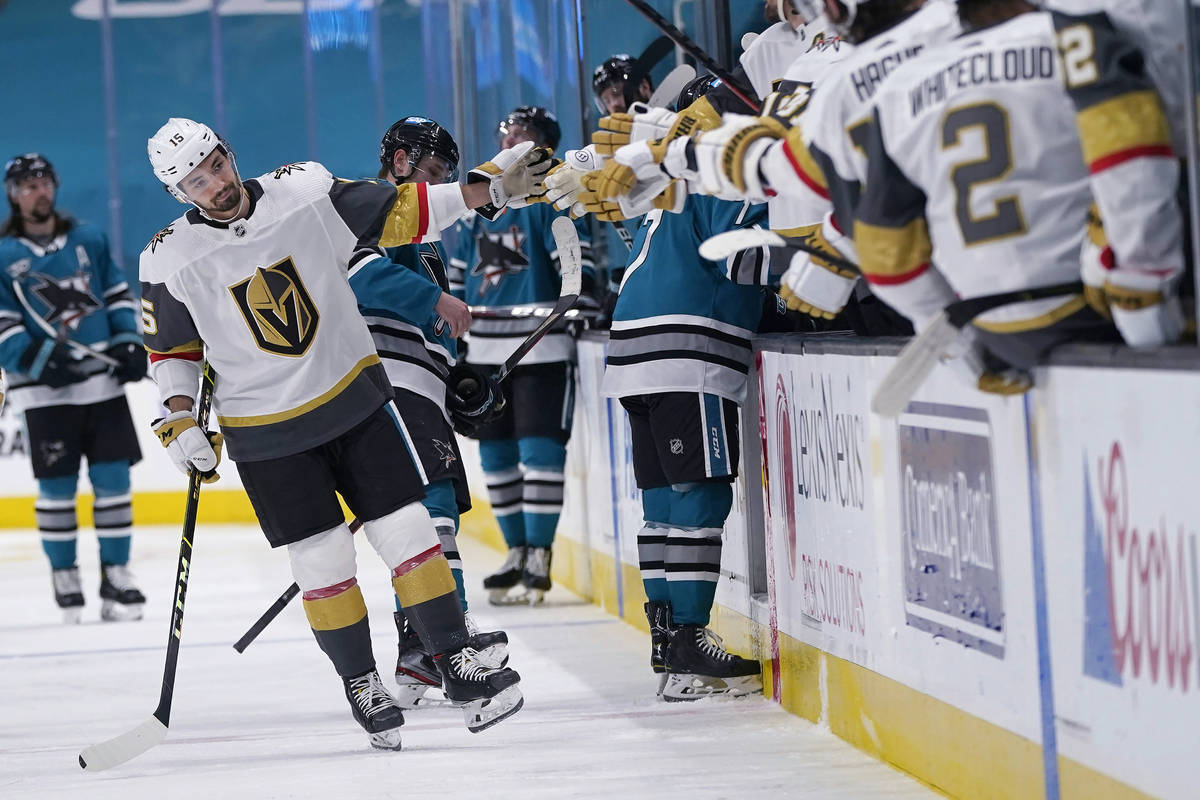 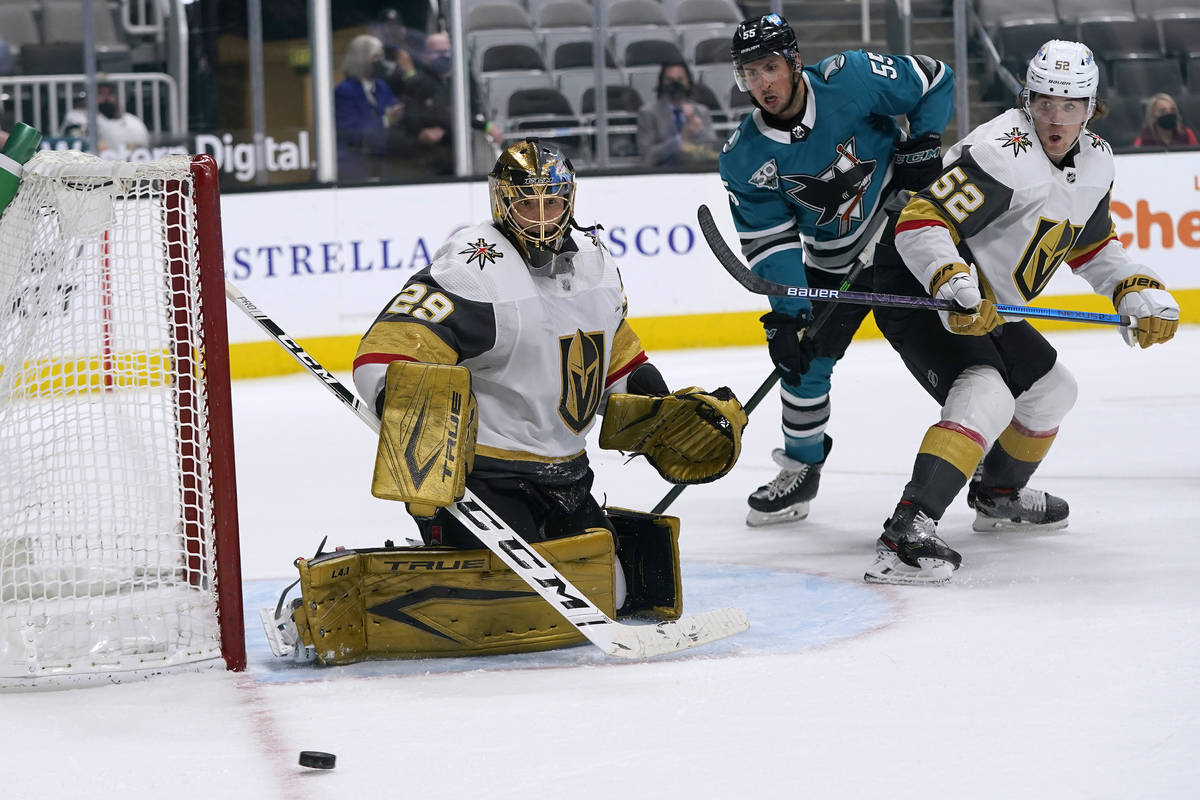 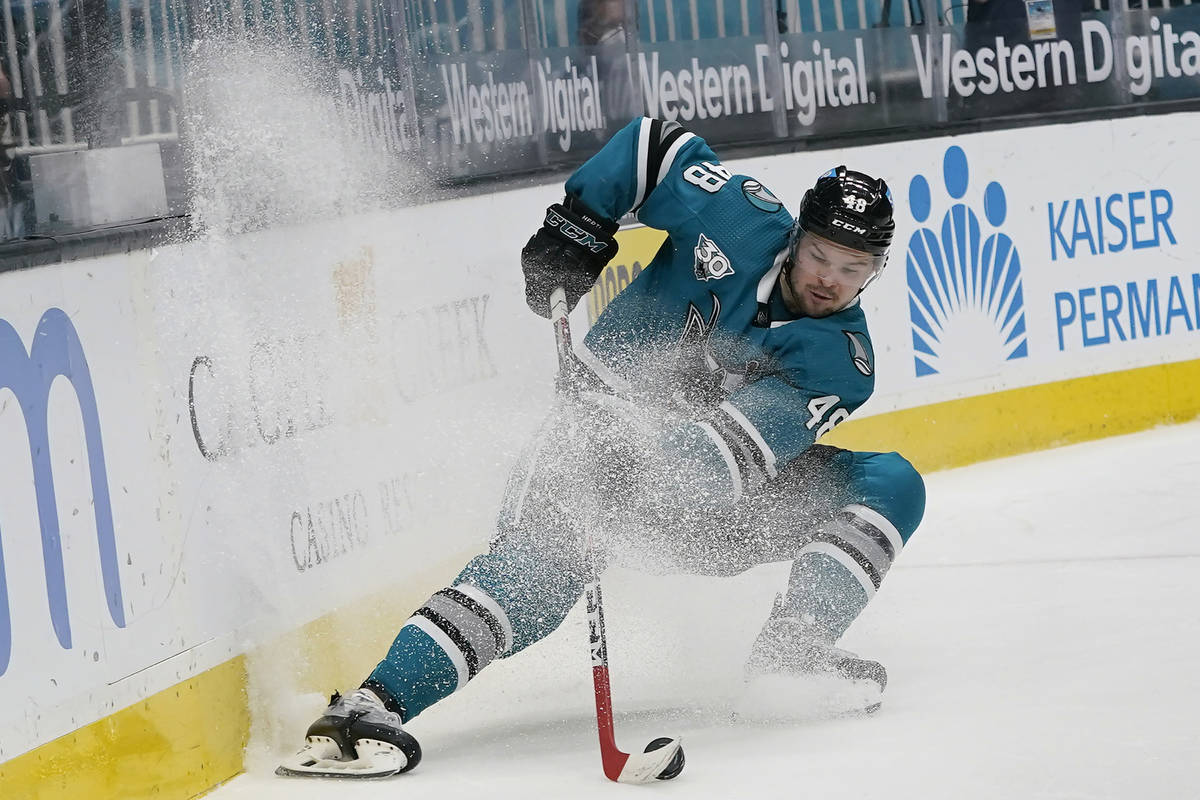 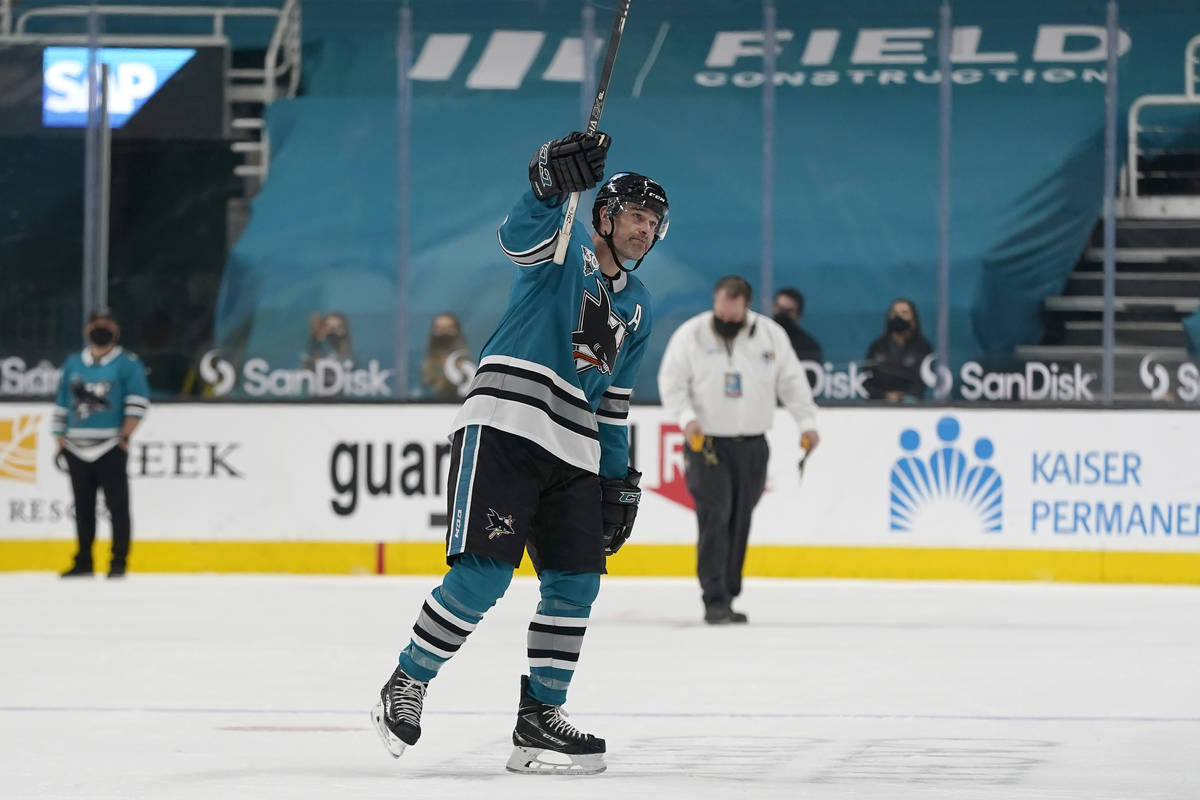 Midway through the first period, it was obvious which team cared and which one was treating the game like an annoying robo call about a new car warranty.

The Knights jumped on an indifferent San Jose squad early in the first period and coasted to a 6-0 victory in front of an announced crowd of 1,654 at SAP Center.

Marc-Andre Fleury recorded his sixth shutout and extended his personal winning streak to nine games. William Carrier and Jonathan Marchessault each had a goal and an assist as the Knights went 8-0 in the season series against their rival.

“We talked about wanting to put the two points on the board and making (Colorado) have to win their games,” coach Pete DeBoer said. “It was an important night and a little bit of a trap game, but I thought we came and got the job done like we have a lot of nights this year.”

The Knights (40-14-2, 82 points) finished as the only team in the NHL with 40 victories and will wait to find out their playoff opponent.

Colorado hosts Los Angeles on Thursday, and the Knights will win the West Division title and Presidents’ Trophy for the best overall record if the Avalanche lose.

Colorado routed Los Angeles 6-0 on Wednesday to remain in control of its own destiny.

The Knights will play Minnesota in the first round of the playoffs if Colorado wins the division. St. Louis awaits the top seed.

“Obviously, took care of business tonight. Did what we had to do,” said Dylan Sikura, who added two goals in the third period. “I guess we’ll see what happens. We’re going to have to get through those teams regardless, so whether it’s the first round or the second round you have to beat those teams in order to move on.”

Fleury made his final case for the Vezina Trophy and finished with 19 saves to earn his 67th career shutout. He broke a tie with Patrick Roy and moved into a tie for 14th on the all-time list.

Fleury was fortunate that Patrick Marleau couldn’t finish on a breakaway late in the first period, and he turned away Evander Kane from point-blank range with about three minutes left in the second.

The shutout gave Fleury and partner Robin Lehner the Jennings Trophy, which goes to the goalies for the team with the fewest goals allowed.

“For me, hands-down the best goalie tandem in the league,” DeBoer said. “They got some good help from our commitment to defending. But those two were outstanding every night for us.”

San Jose iced a lineup with several youngsters in front of rookie goalie Alexei Melnichuk and didn’t look interested in playing spoiler in the first period.

The Knights finished with a 20-6 advantage in shots on goal in the period, and Alex Pietrangelo gave the Knights a 1-0 lead less than four minutes into the game.

After a clean breakout that created a three-on-three rush, Marchessault’s centering pass pinballed around in front of Melnichuk. The puck ended up on Pietrangelo’s stick, and he backhanded in his seventh goal and fourth point in the past three games.

Keegan Kolesar doubled the lead at 7:48 of the first when he cleaned up a rebound at the side of the net after Nicolas Roy’s shot was stopped by Melnichuk.

“In a type of game like that you want to get the will out of the opponent as fast as you can, and we did,” Marchessault said. “We played with the lead and played well. Structured everywhere in all three zones.”