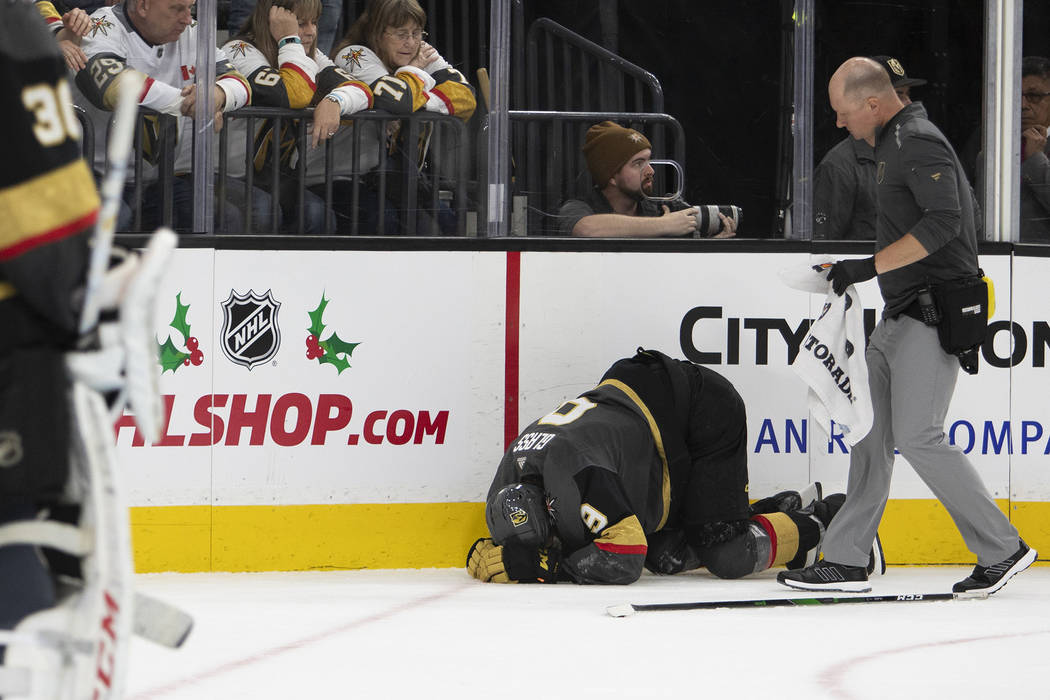 Vegas Golden Knights center Cody Glass (9) crouches in pain during the second period of the game against the New York Rangers on Sunday, Dec. 8, 2019, at T-Mobile Arena, in Las Vegas. Glass was escorted off the ice by teammates. (Ellen Schmidt/Las Vegas Review-Journal) @ellenkschmidt_

The Golden Knights’ 5-0 loss to the New York Rangers on Sunday became much worse with 3:13 left in the second period.

That’s when rookie Cody Glass had to be helped off the ice after receiving an elbow to the back of his head from Rangers left wing Brendan Lemieux. Teammates Jonathan Marchessault and Mark Stone helped Glass to the bench, and the center immediately went to the locker room and didn’t return.

Coach Gerard Gallant said after the game that Glass suffered an upper-body injury and the Knights will know more about his status Monday. But the injury was a scary and unwelcome sight for the team, which carries high hopes for the first draft pick in franchise history.

“He’s going to be in this organization as one of the best players for a long, long time,” Stone said. “Obviously, didn’t like the hit. Thought it was reckless. But that’s the type of player that guy (Lemieux) is.”

Left wing William Carrier made Lemieux, who ranked fifth in the NHL with 108 penalty minutes last season, answer for the hit 3:04 into the third period by fighting him. The Knights hope Lemieux will have to address it next with the NHL’s department of player safety.

“I think we (have) all seen the hit,” Gallant said. “It was a flying elbow to his head. It wasn’t called. It’s disappointing, and I hope it gets looked at. I think it’s a bad hit.”

“We’ll see what the league does about it,” Carrier said. “They’re pretty good at it, so we’ll let the league decide.”

Glass, 20, was playing well before getting hurt. He was moved back to his natural center position Dec. 2 after Cody Eakin’s upper-body injury and looked comfortable in the middle of the ice. His line with left wing Chandler Stephenson and right wing Alex Tuch created three scoring chances and allowed none Sunday before he was hurt.

The Knights probably will make a roster move before Tuesday’s home game against the Chicago Blackhawks if Glass is unable to play. The team has 11 healthy forwards.

“I just saw an opportunity to make a hockey play,” Lemieux said. “I hope he’s OK. That’s an unfortunate part of the game. For me, there was not much I could do there. It’s just a hockey play. Sometimes that happens, and it’s unfortunate.”

Carrier’s scrap with Lemieux was his first fight since March 30 and his third with the Knights, according to HockeyFights.com.

The 24-year-old bruiser has four NHL fights (one with the Buffalo Sabres), three American Hockey League fights and five junior hockey fights to his name.

“I don’t know if it was on purpose or not, but he’s got to answer for it,” Carrier said. “Same for me when I do those kinds of hits.”