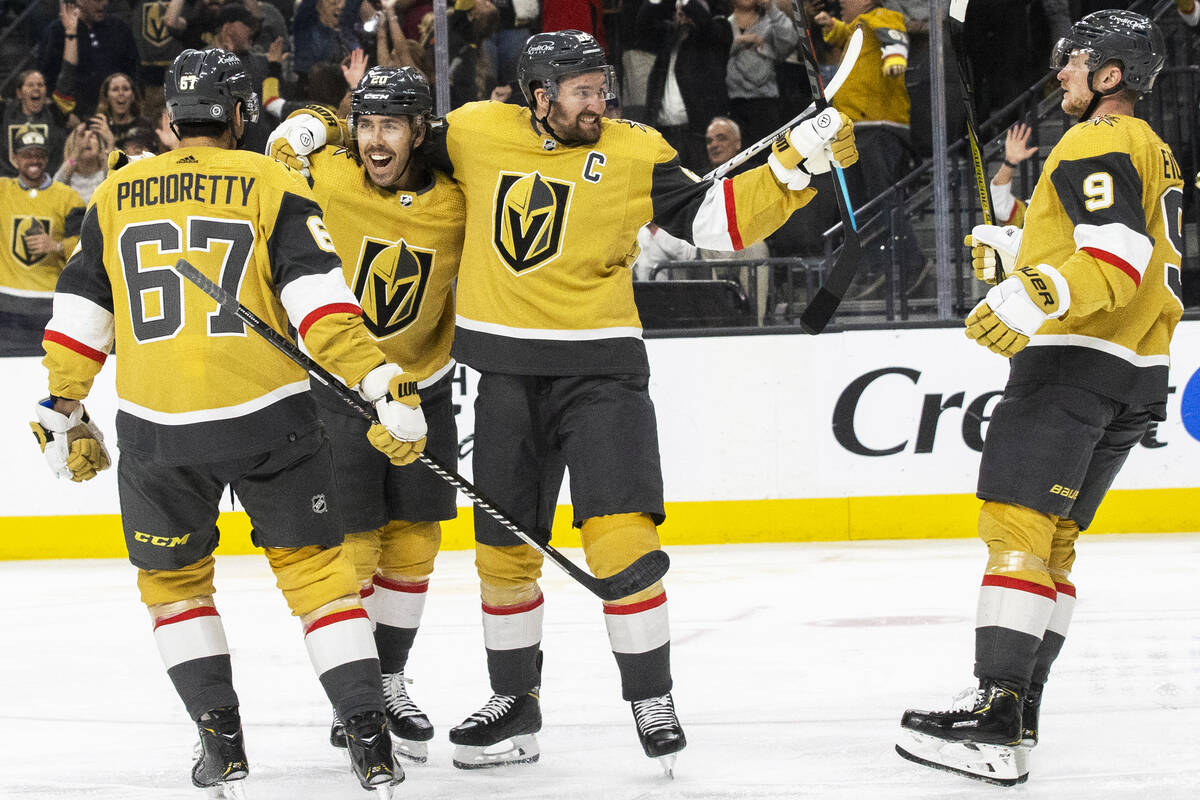 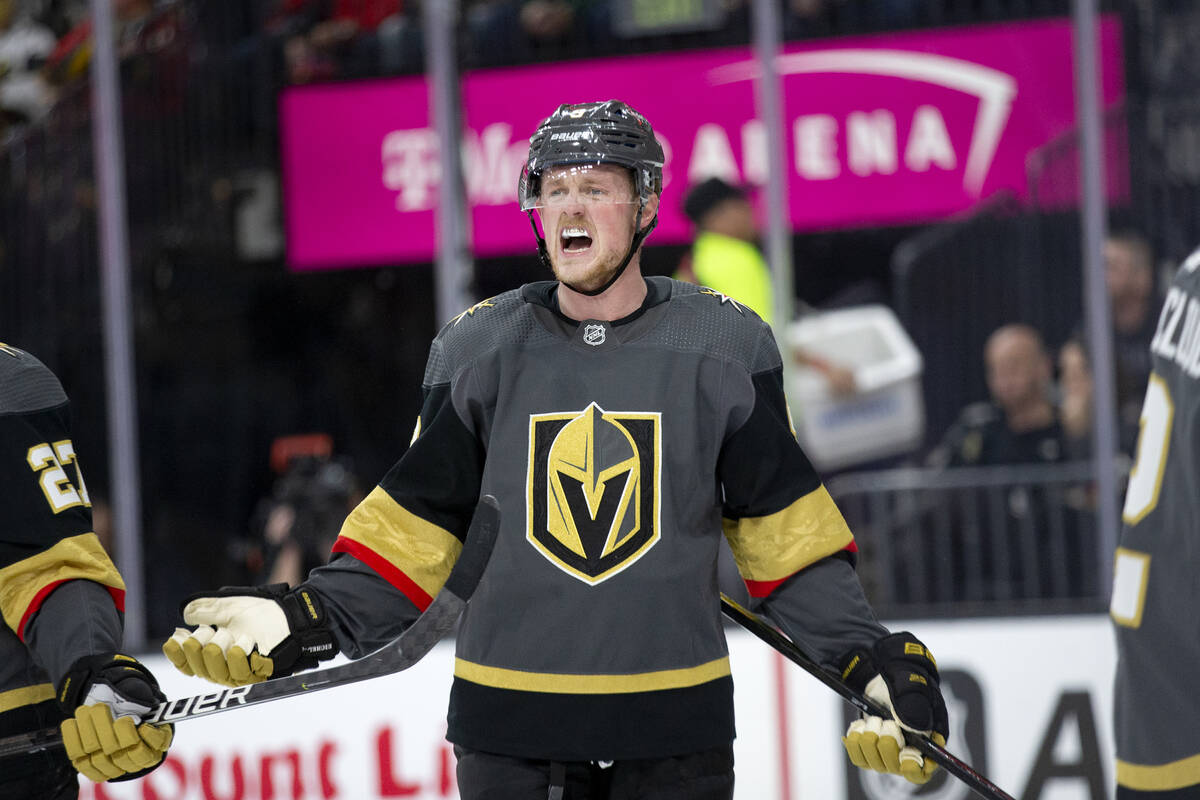 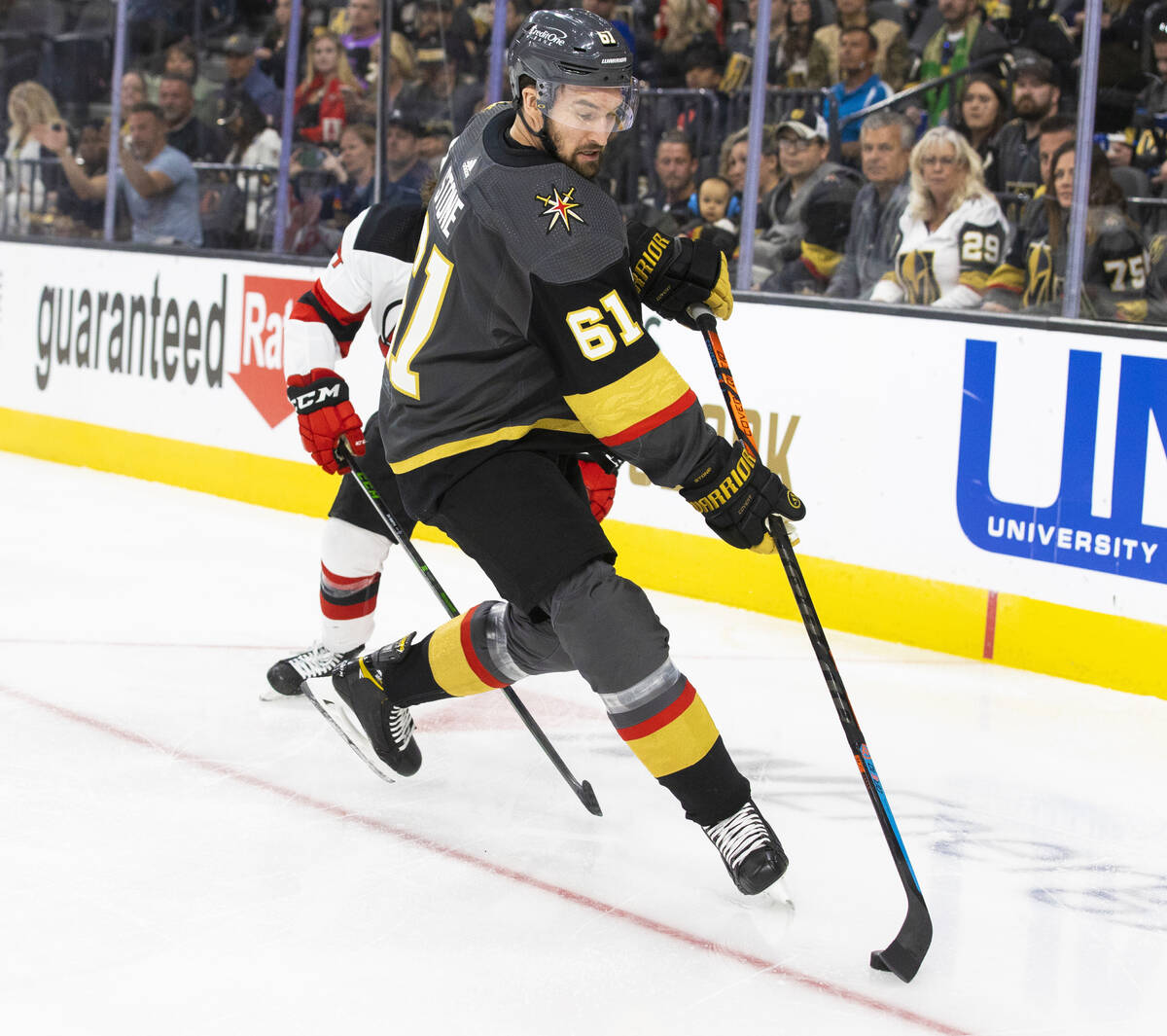 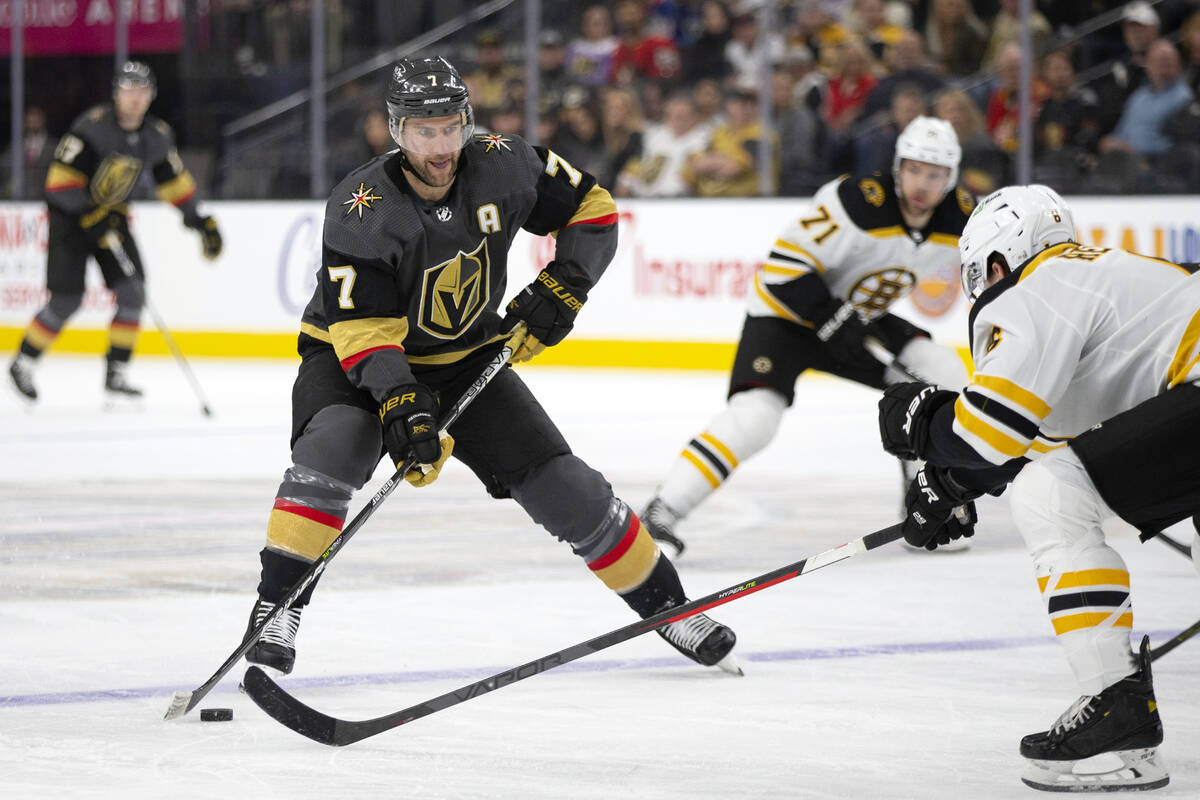 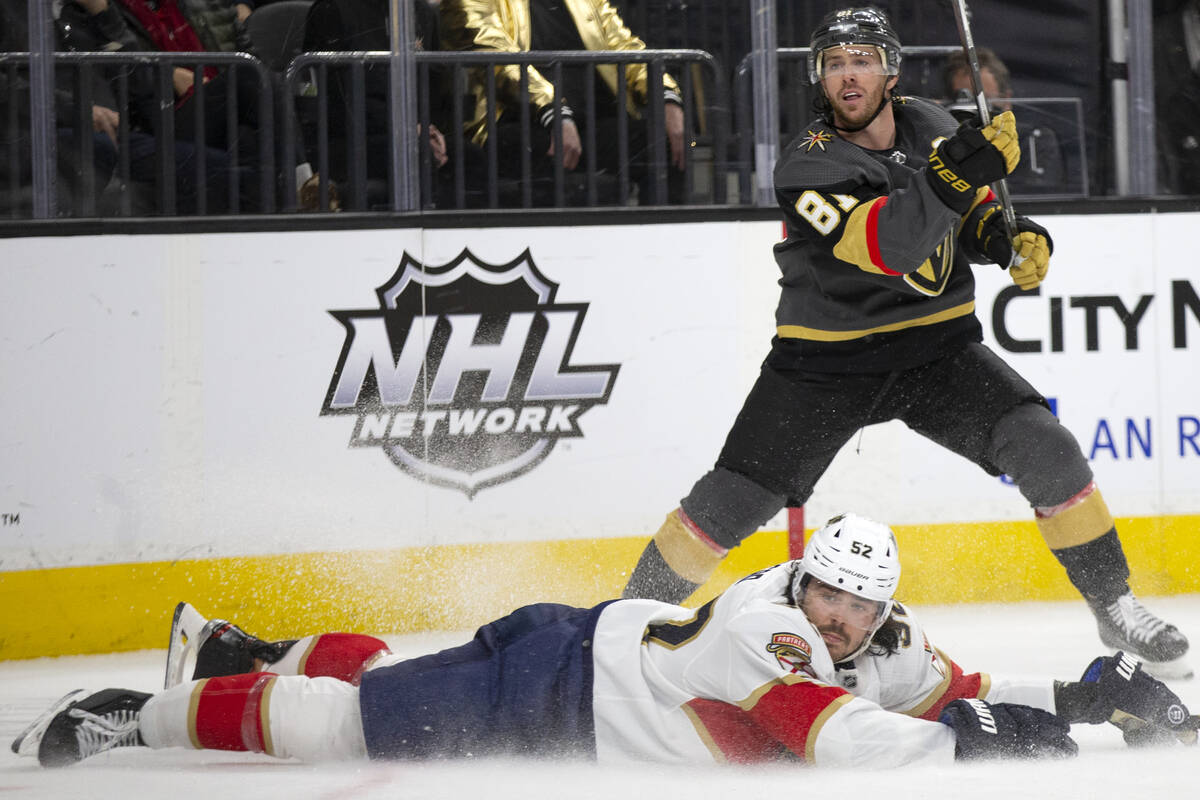 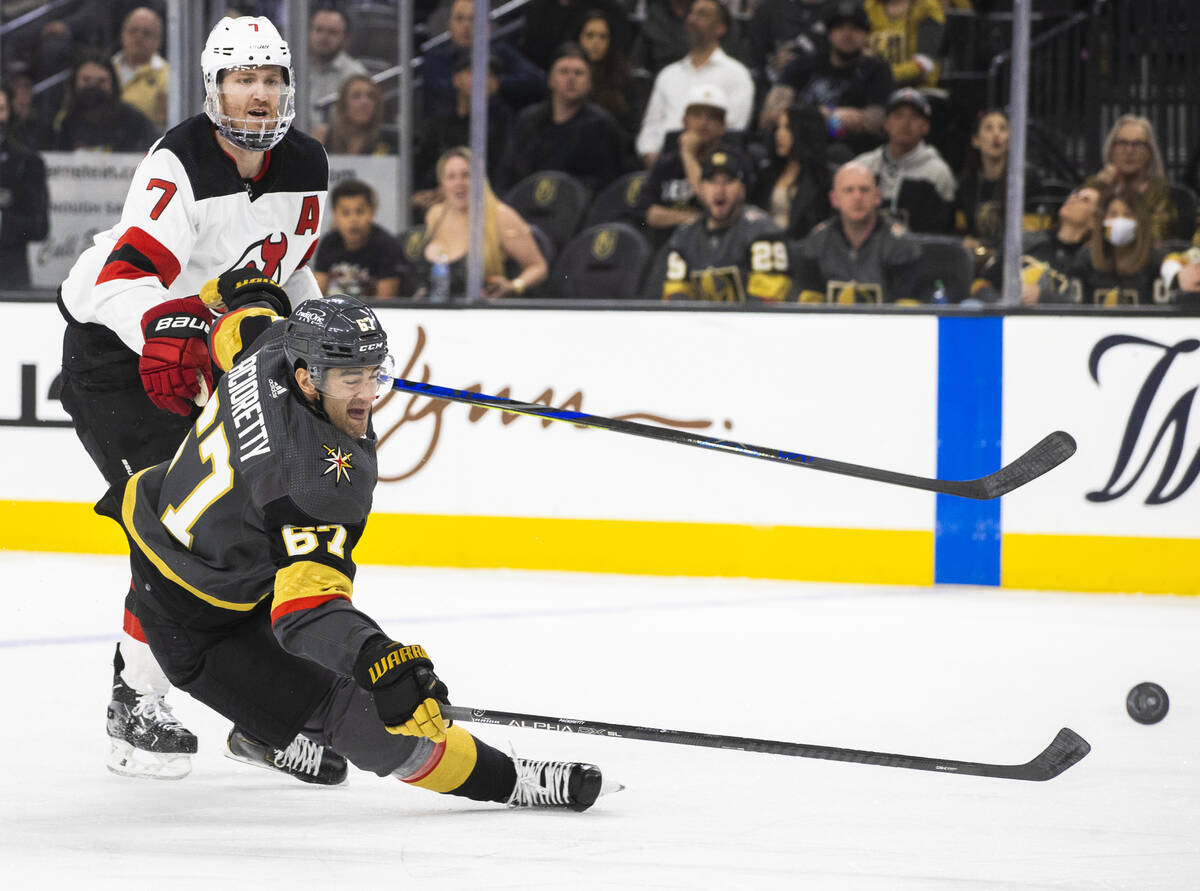 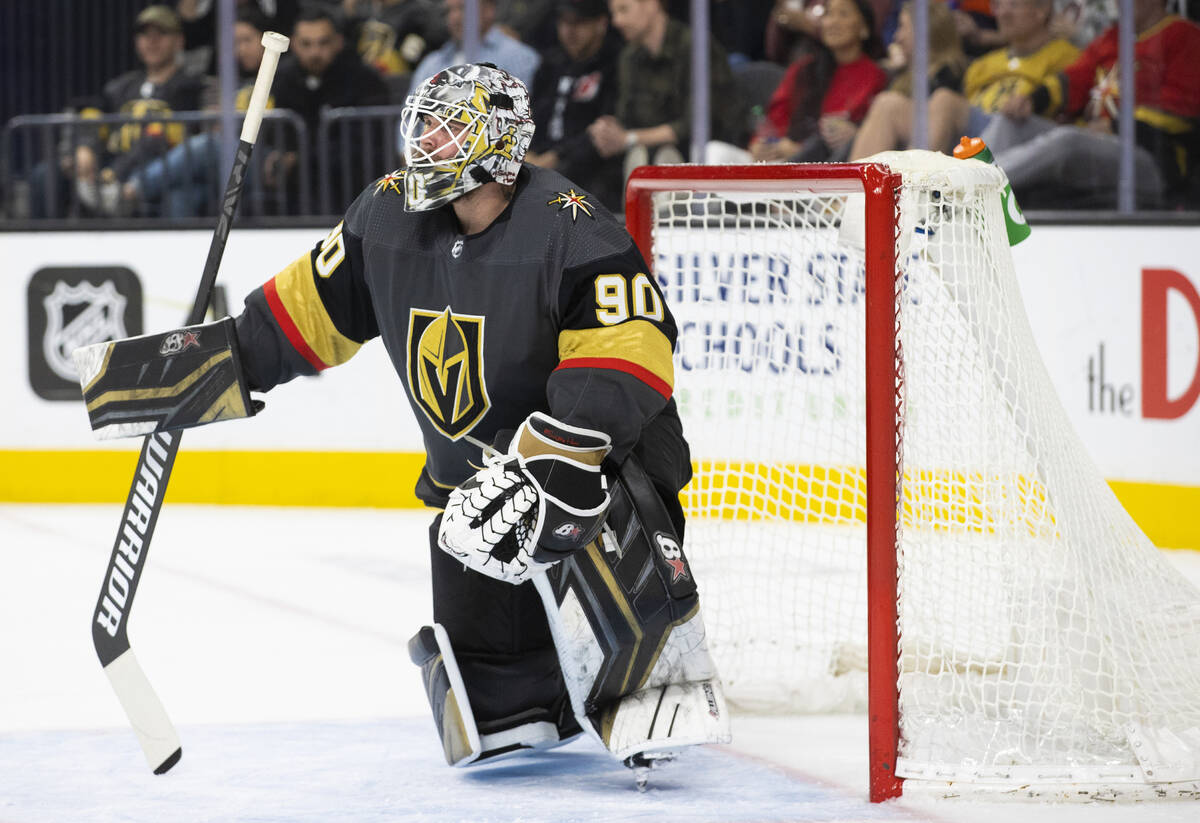 Golden Knights goaltender Robin Lehner (90) kneels by the net during a break in the second period during an NHL hockey game against the New Jersey Devils on Monday, April 18, 2022, at T-Mobile Arena, in Las Vegas. (Benjamin Hager/Las Vegas Review-Journal) @benjaminhphoto 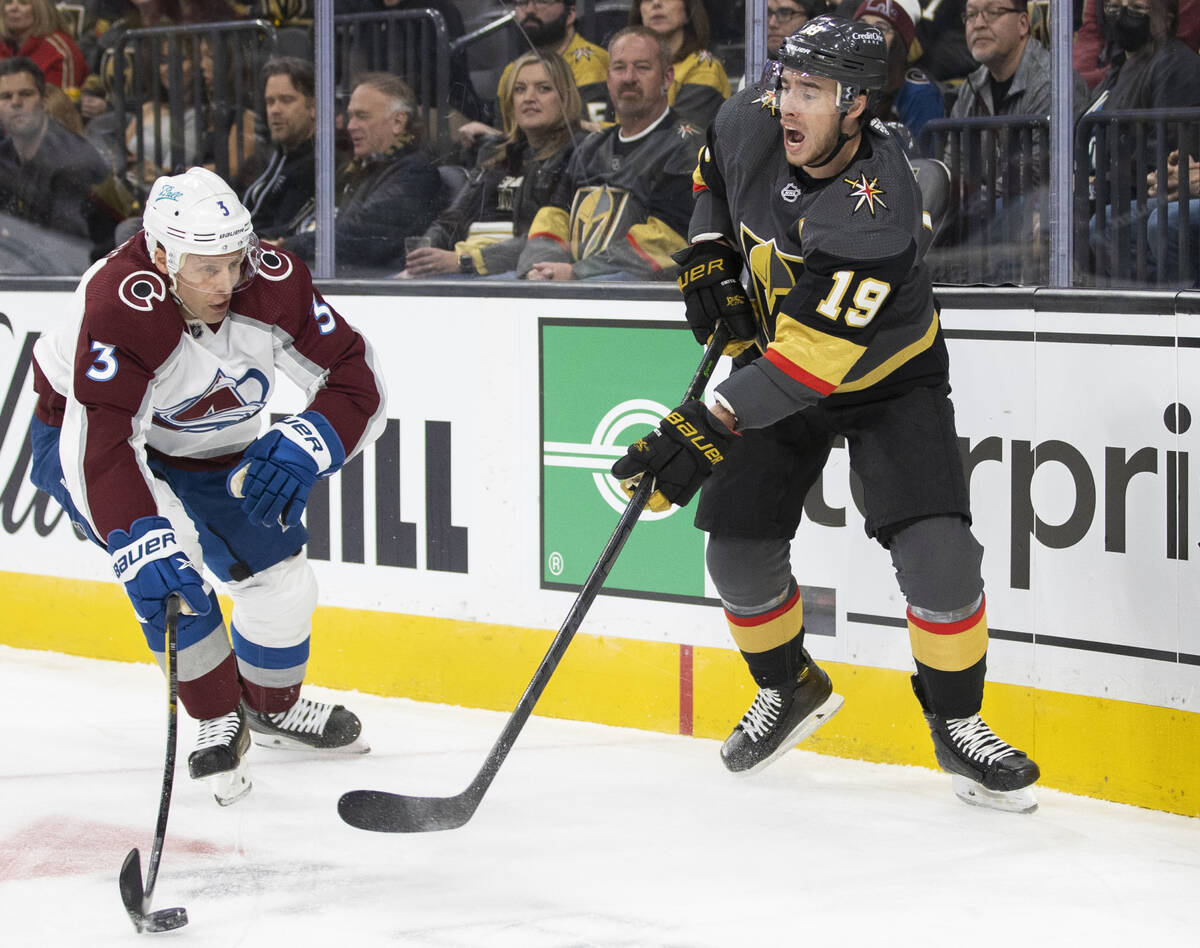 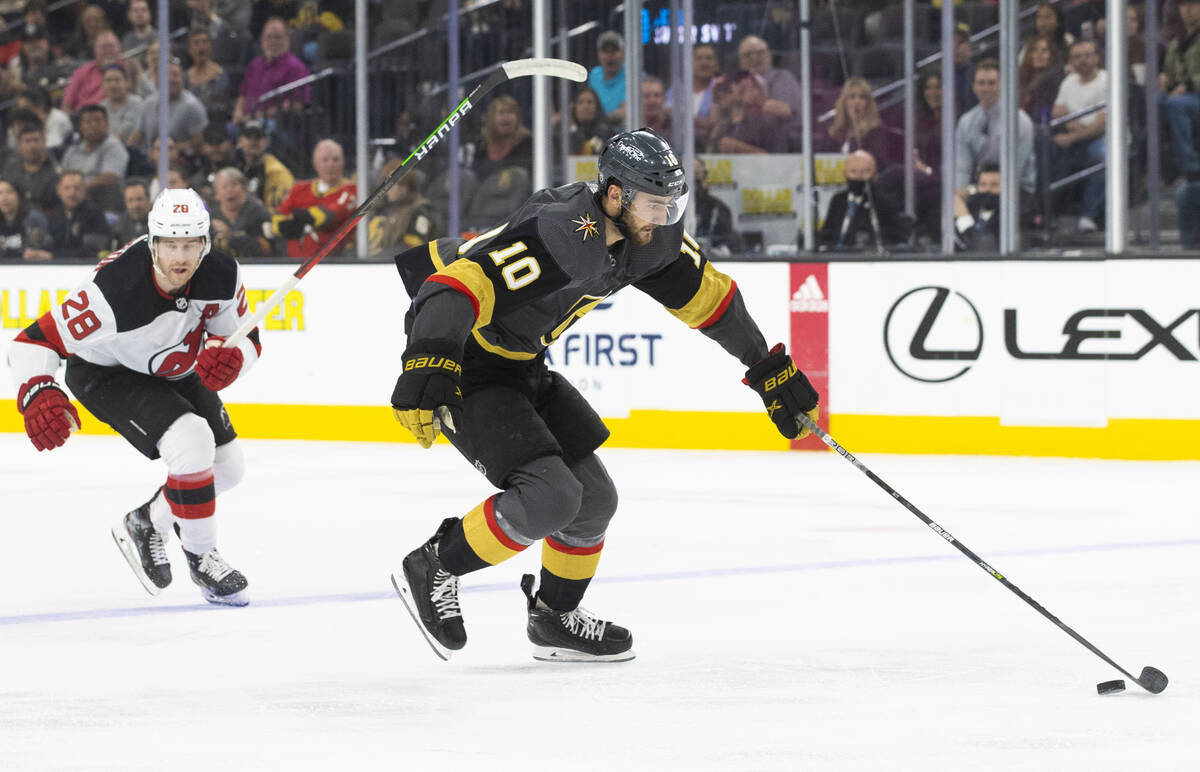 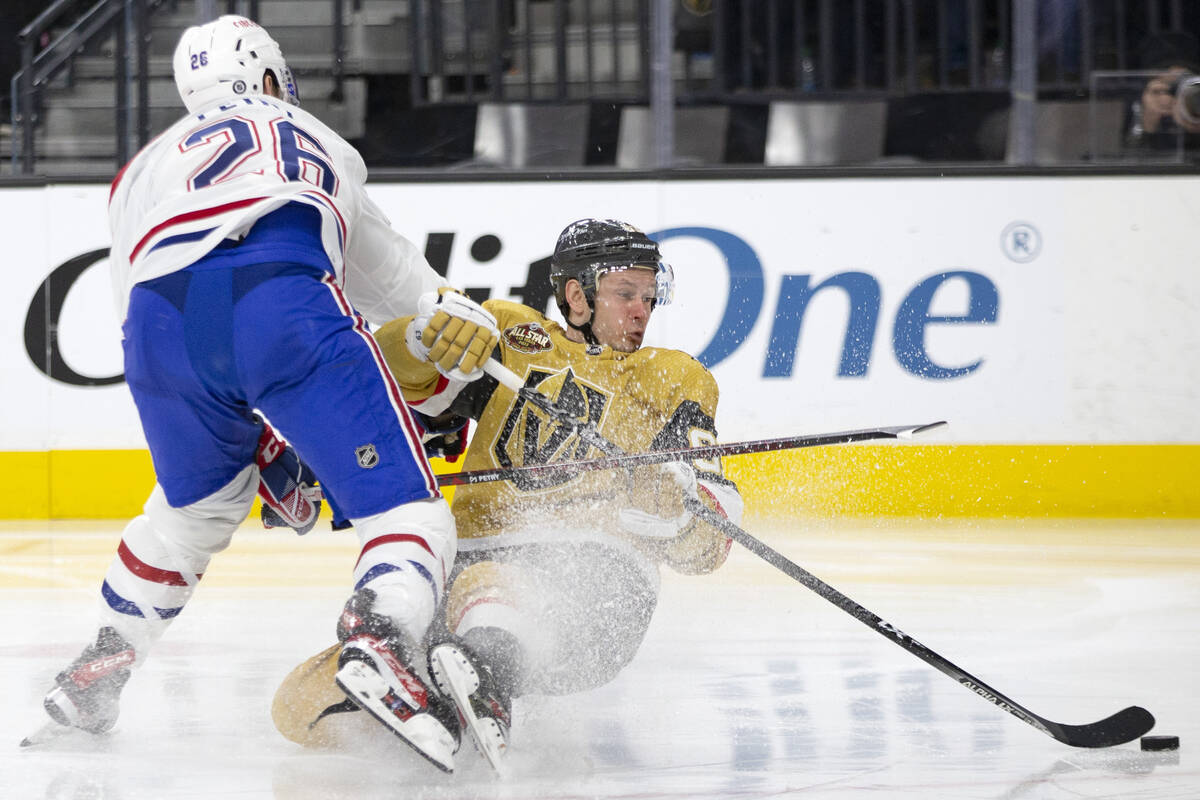 The Golden Knights have a lot of work to do this offseason.

They missed the playoffs for the first time in franchise history and have one year left to make owner Bill Foley’s “Cup in six” promise come true. There’s a lot of ground to cover to get from one outcome to the other. Only the 2019 St. Louis Blues have won it all a year after missing the playoffs since the salary cap was put in place in 2005.

The Knights’ position is made more complicated by their finances. They are projected to be more than $500,000 over the salary cap’s $82.5 million limit with their current roster that includes 10 forwards, seven defensemen and three goaltenders. That doesn’t include unrestricted free agent forwards Reilly Smith and Mattias Janmark or their restricted free agents — forwards Nicolas Roy, Keegan Kolesar and Brett Howden and defenseman Nic Hague.

The Knights will need to do something just to get cap compliant. They might have to make several moves if they want to bring some of their free agents back.

“We have time on our hands,” general manager Kelly McCrimmon said last week when asked about the state of the team’s cap and roster. “We’re four months … from training camp, or thereabouts. All of those are really important aspects of the offseason of an NHL team. We’ve got work to do in some of those areas.”

The offseason won’t pick up until the draft July 7 and 8 and the opening of free agency July 13. Until then, here’s a look at the status of each player on the roster:

Nailed to the floor

RW Mark Stone (5; $9.5 million) — He’s the captain and has a full no-movement clause in his contract.

It probably would take a Vito Corleone special — an offer that can’t be refused — for the Knights to consider moving them.

LW Jonathan Marchessault (2; $5 million) — He led the team in scoring and is one of its leaders.

LW William Carrier (2; $1.4 million) — He’s a bottom-six forward but an important one for the team’s preferred identity.

D Alec Martinez (2; $5.25 million) — He had a difficult season and missed 56 games. But no one on the team doubts his importance.

D Brayden McNabb (3; $2.85 million) — He signed a three-year extension in January. He provides a physical element to the back end.

D Zach Whitecloud (6; $2.75 million) — He agreed to a six-year extension in October that has him under contract longer than anyone else on the team.

G Logan Thompson (3; $766,667) — He finished his rookie season strong and signed a three-year extension in January. He’s part of the future.

There’s some reason to pause, but a move is unlikely.

C William Karlsson (5; $5.9 million) — His points per game (0.52) were his lowest in five seasons with the Knights. But capable top-six centers don’t grow on trees.

RW Michael Amadio (2; $762,500) — He was a waiver pickup in October. But he signed a two-year extension in January, and the team needs cheap depth players like him.

D Ben Hutton (2; $850,000) — Similar to Amadio, he was signed off the street in October and earned an extension in March. He’s valuable depth.

G Robin Lehner (3; $5 million) — His first season as the primary starter didn’t go as planned. He had shoulder surgery May 4, but he’s still the team’s most proven goaltender.

They’re scheduled to hit the open market, so their return is far from certain.

RW Reilly Smith — He’s one of the original Golden Misfits, but the team would have to get creative to bring him back.

LW Mattias Janmark — He returned on a one-year contract to chase a Stanley Cup. That quest might have to continue elsewhere.

The Knights’ cap crunch could make these negotiations tricky. Teams also could force their hand by taking the rare step of extending an offer sheet to most of these players.

C Nicolas Roy — He earned a raise after scoring 39 points. The Knights will have to determine how much of one they can afford.

RW Keegan Kolesar — He scored 24 points in his second NHL season while missing only five games.

C Brett Howden — He was productive in the bottom-six with 20 points in 47 games. He suffered a scary-looking injury in March, but McCrimmon said this month it was “very manageable.”

D Nic Hague — The 23-year-old, unlike Roy, Kolesar and Howden, doesn’t have arbitration rights to help force a deal.

It feels as if their futures are up in the air.

RW Evgenii Dadonov (1; $5 million) — The Knights attempted to trade him at the deadline. They might try to again to free up salary cap space.

C Nolan Patrick (1; $1.2 million) — He’s out indefinitely, McCrimmon said this month. Injuries have been the story of the 23-year-old’s career.

G Laurent Brossoit (1; $2.325 million) — He didn’t appear in the final 20 games because of an undisclosed injury that was expected to require offseason surgery. Thompson forced his way into the picture in his absence.