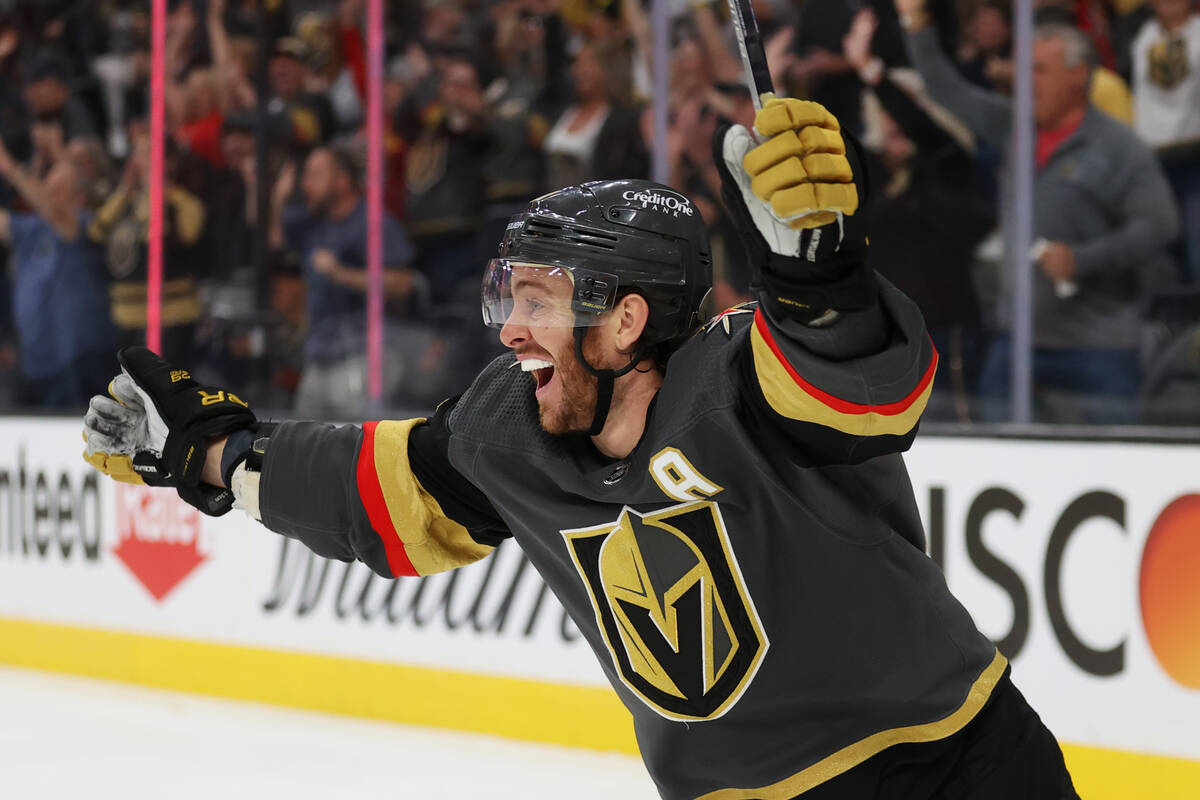 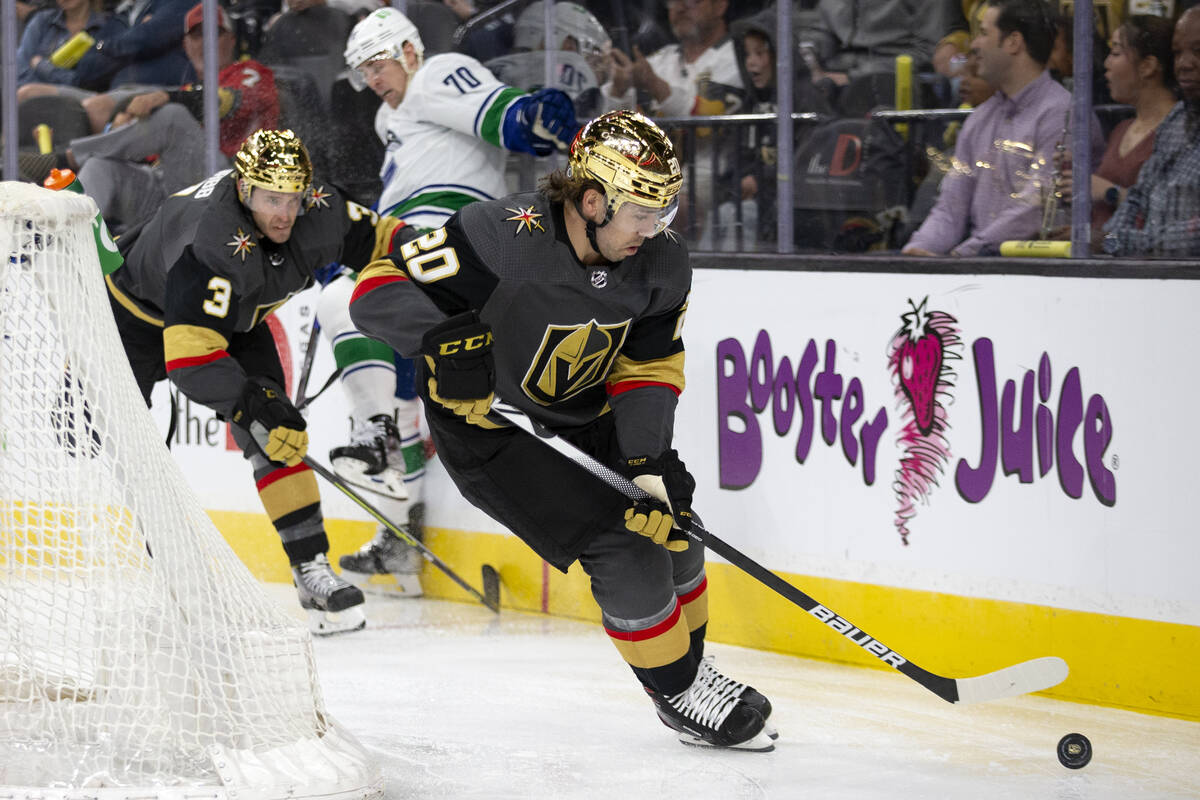 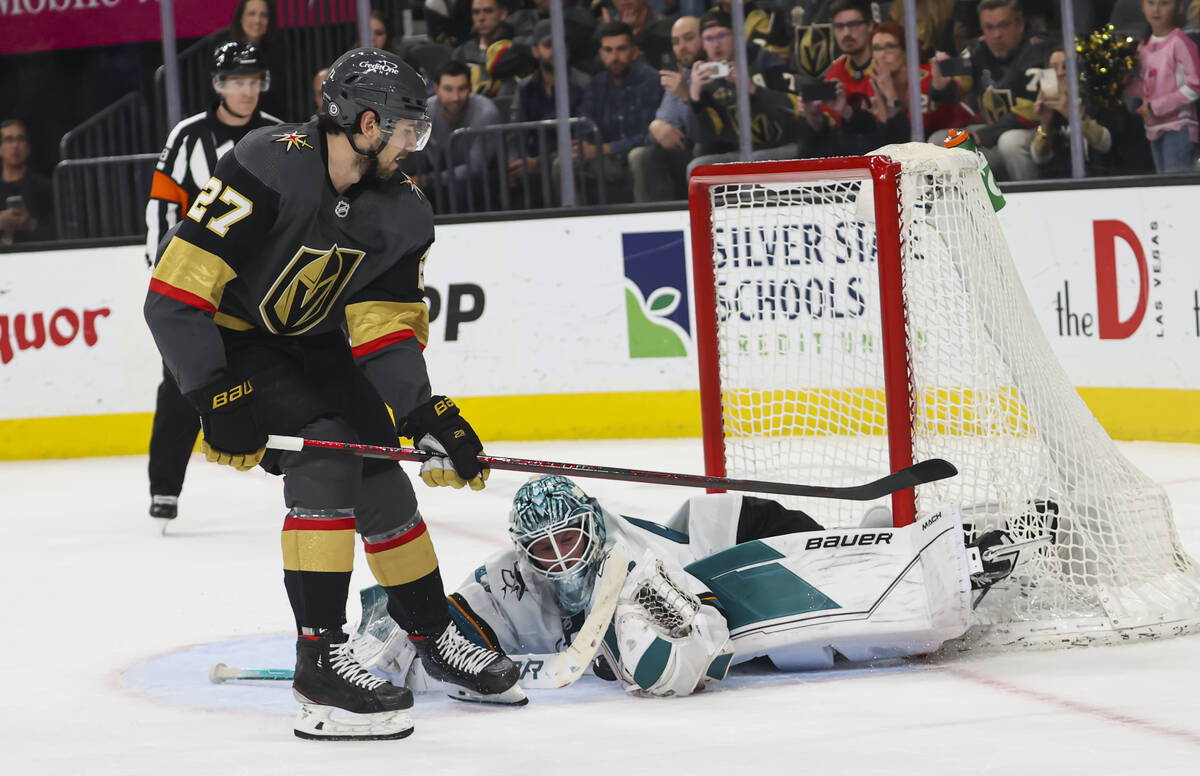 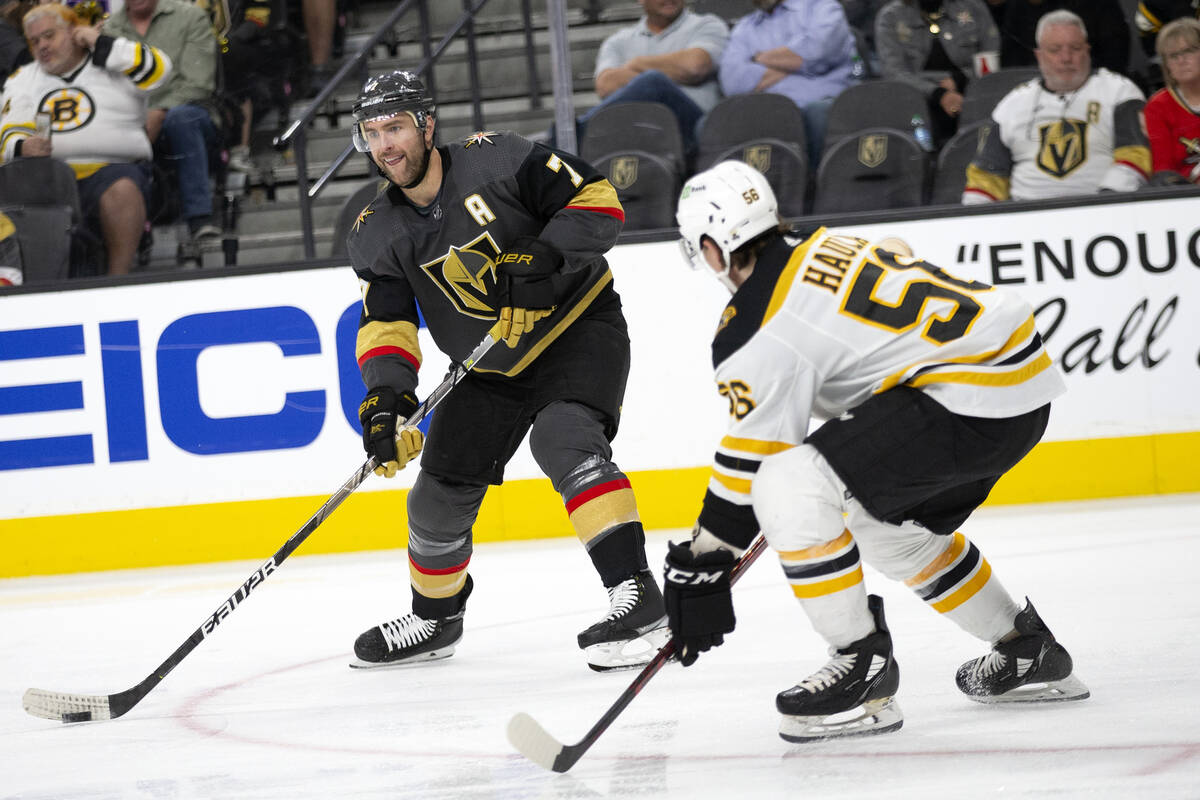 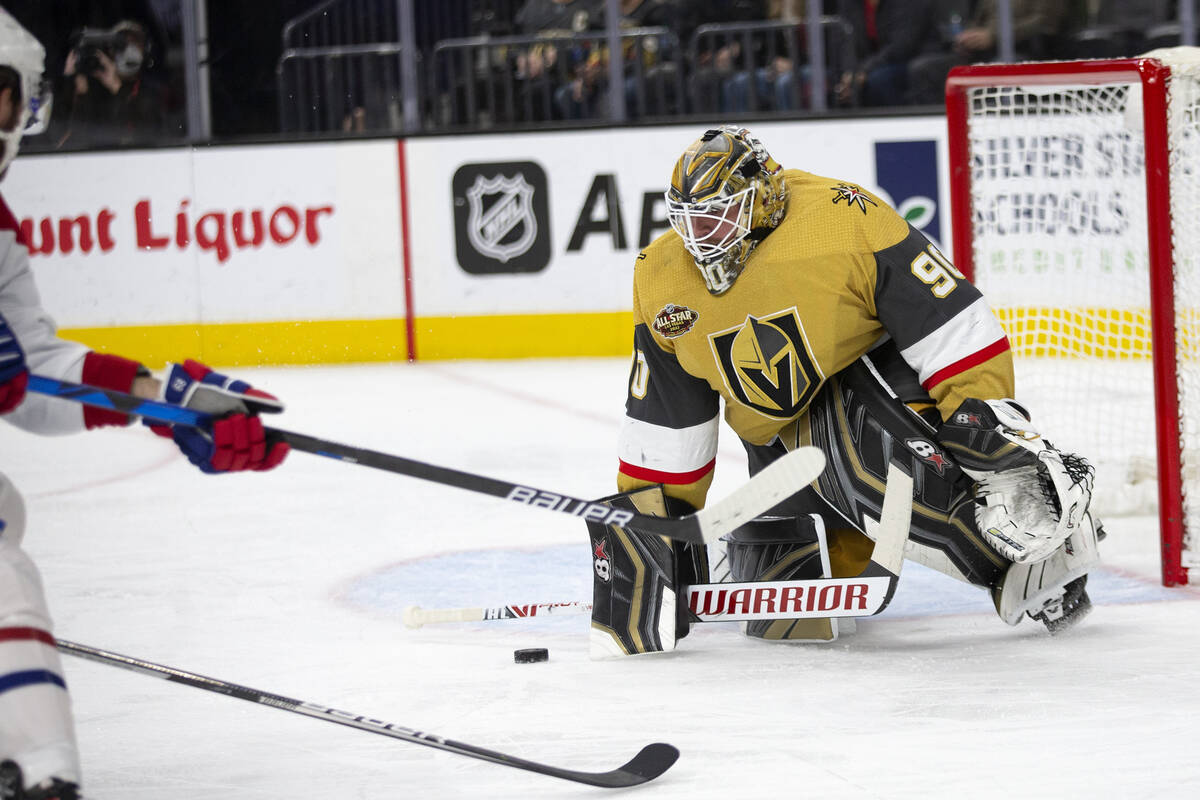 One thing is obvious about the Golden Knights’ season: It wasn’t good enough.

This team wasn’t expected to finish 17th in the NHL standings and 14th in goal differential. The Knights weren’t supposed to give up a franchise record 2.98 goals per game (tied for 14th-best in the league) one year after winning the Jennings Trophy for fewest allowed. They didn’t want to be in the middle of a coaching search in May.

“We missed the playoffs, which is humbling for a team no matter what the reasons were for how that happened,” general manager Kelly McCrimmon said.

How they got there is a tricky story. Injuries — about 500 man-games lost worth — played a major factor. So did inconsistency and poor stretches of play. It should lead to an interesting offseason as the team tries to recover with a new coach.

Before moves start being made, here’s a look at the Knights’ performance this season:

Left wing Jonathan Marchessault — He scored 30 goals for the second time in his career and was an All Star for the first time.

Right wing Evgenii Dadonov — He was one of three 20-goal scorers on the Knights. But he had only eight power-play points after being brought in to help that unit.

Center Nicolas Roy — The 25-year-old had a breakout season with 39 points. He’s a restricted free agent.

Left wing Max Pacioretty — He was productive when available but missed 43 games with injuries. He finished with 19 goals.

Center William Karlsson — He missed time with a broken foot and scored the fewest points-per-game (0.52) of his five seasons with the Knights.

Right wing Mark Stone — He appeared in only 37 games because of a back injury. He had 28 points in his first 28 games, then two in his final nine after coming off long-term injured reserve.

Center Jack Eichel — He scored 25 points in 34 games after arriving via a blockbuster trade. He did so while recovering from neck surgery and playing through a broken thumb the final six weeks.

Left wing Mattias Janmark — He had one point in his first 11 games while recovering from COVID-19. After that, he matched his production from the previous season exactly with 24 points in 56 games.

Right wing Keegan Kolesar — He had 24 points in his second NHL season. He was minus-3 at five-on-five, tied for the second-worst mark among forwards.

Left wing William Carrier — He set career highs in goals (nine) and points (20) in 63 games. His direct and physical style of play brings energy to the team.

Center Brett Howden — He ranked fifth on the Knights in points-per-60 minutes at five-on-five, showing how effective he was in a bottom-six role. He’s a restricted free agent.

Right wing Michael Amadio — The waiver pickup had 11 goals and seven assists in 53 games. He was a nice find as a cheap depth addition.

Center Nolan Patrick — He appeared in only 25 games and is out indefinitely, according to general manager Kelly McCrimmon. Injuries continue to affect his career.

Center Jake Leschyshyn — The rookie appeared in 41 games and scored six points. His skating has improved, and he could push for more time next season.

Right wing Jonas Rondbjerg — He, like Leschyshyn, was called on often as a rookie. He had six points in 30 games.

The Knights got impressive performances from Marchessault and Stephenson. Roy, Carrier, Howden and Amadio had breakout seasons. Pacioretty and Stone were on pace for great seasons until injuries derailed them. But the overall team production was lacking. Only Marchessault, Stephenson and Dadonov had more than 20 goals or 40 points. That has to change with all the talent returning.

Shea Theodore — He set career highs in goals (14) and points (52) while taking on more difficult matchups. He also had a team-high five game-winning goals.

Alex Pietrangelo — He was fourth on the Knights with 44 points while breaking in different partners throughout the season. He was an All Star for the fourth time and won the breakaway challenge.

Zach Whitecloud — He scored eight goals after having two in his first 68 games. His development earned him a six-year contract extension in October.

Brayden McNabb — His steady presence earned him a three-year extension in January. He led the NHL in blocked shots with 179 despite missing 13 games.

Dylan Coghlan — He played 59 games in his second season. He was minus-5 at five-on-five, the worst mark on the blue line.

Ben Hutton — He was signed off the street in October and proved to be a savvy addition. He appeared in 59 games and spent plenty of time with Pietrangelo.

Alec Martinez — A freak injury in November knocked him out for 56 games. His toughness and leadership were sorely missed until he returned March 26 against Chicago.

Daniil Miromanov — The rookie played 11 games and was sheltered, often starting shifts in the offensive zone. He had one assist.

Losing a top-four defenseman like Martinez a majority of the season created a domino effect that made life difficult for the Knights. They used a franchise record 13 defensemen, four who made their NHL debuts. The team could have been tighter in its own zone. The Knights were 18th in scoring chances allowed per 60 minutes at five-on-five and 19th in high-danger chances allowed.

Robin Lehner — Injuries limited him to 44 starts and appeared to hamper his play by the end of the season. He was 17th among 74 goaltenders with 10 games or more in goals saved above expected, according to MoneyPuck.com.

Laurent Brossoit — He was decent to start the season, but began to struggle before missing the final 20 games with an undisclosed injury. He finished 10-9-3 with an .895 save percentage.

Logan Thompson — The rookie performed the best among the Knights’ netminders. He was 10-5-3 with a .914 save percentage and gave the team a chance to make the postseason.

The Knights went from winning the Jennings Trophy in 2021 to finishing 20th in team save percentage this season. That isn’t all on goaltending. When short-handed, they often pushed for offense and gave up odd-man rushes the other way. But the consistency in net must improve for them to return to the playoffs.

Power play — The Knights, who ranked 25th at 18.4 percent, should not have finished below teams like Ottawa (20th) and San Jose (22nd) no matter their injuries. This unit needs fixing.

Penalty kill — The Knights slipped from first to 21st (77.4 percent), in large part because of their goaltending. Their save percentage on the penalty kill was second in 2021 and 25th this season.

For all their faults, the Knights finished 12th in five-on-five goal differential at plus-18. They were fifth in the Western Conference. Special teams held them back. They were minus-5 on special teams, tied for 21st in the league. Minnesota and Los Angeles were the only two playoff teams that were worse.