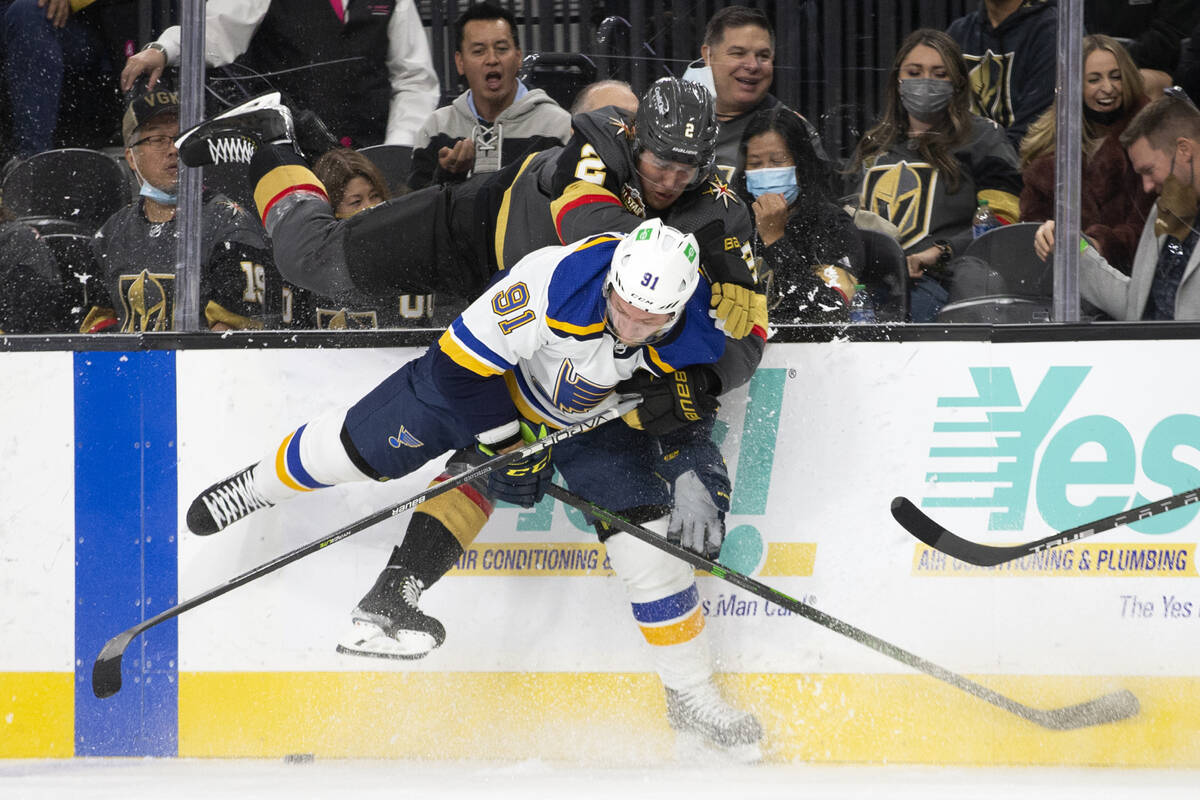 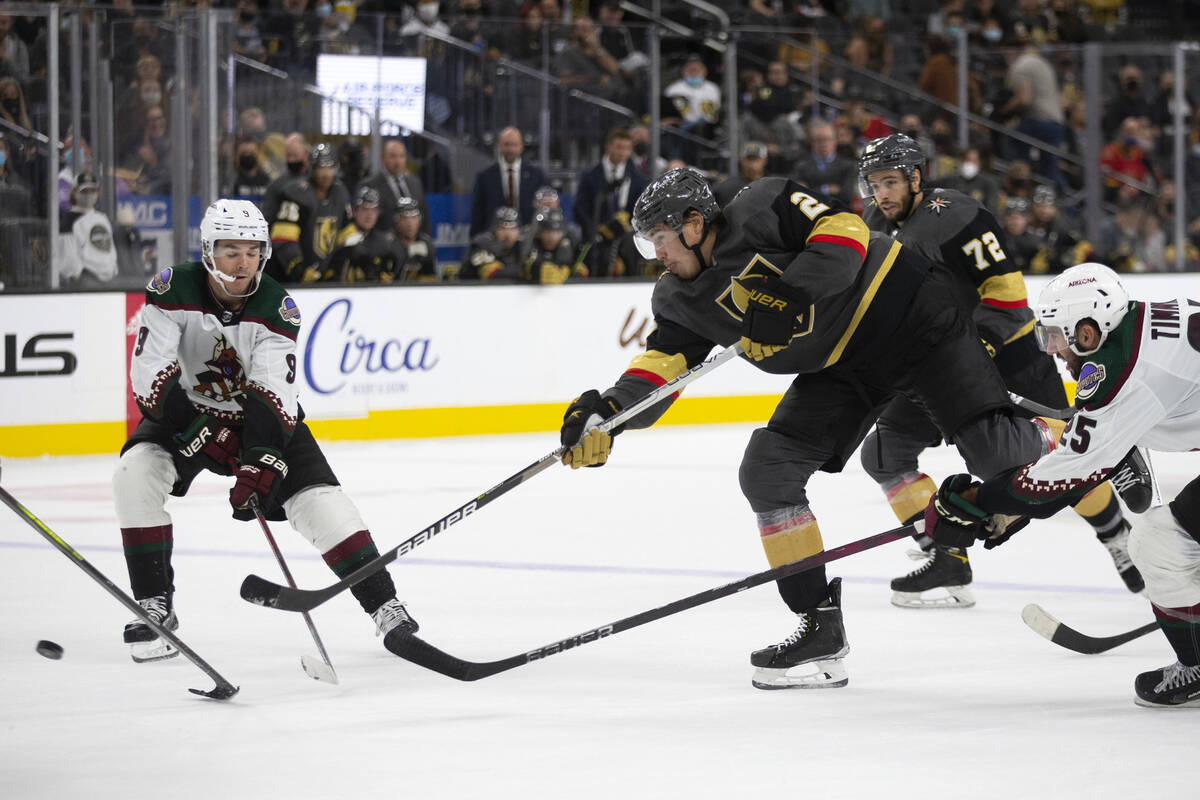 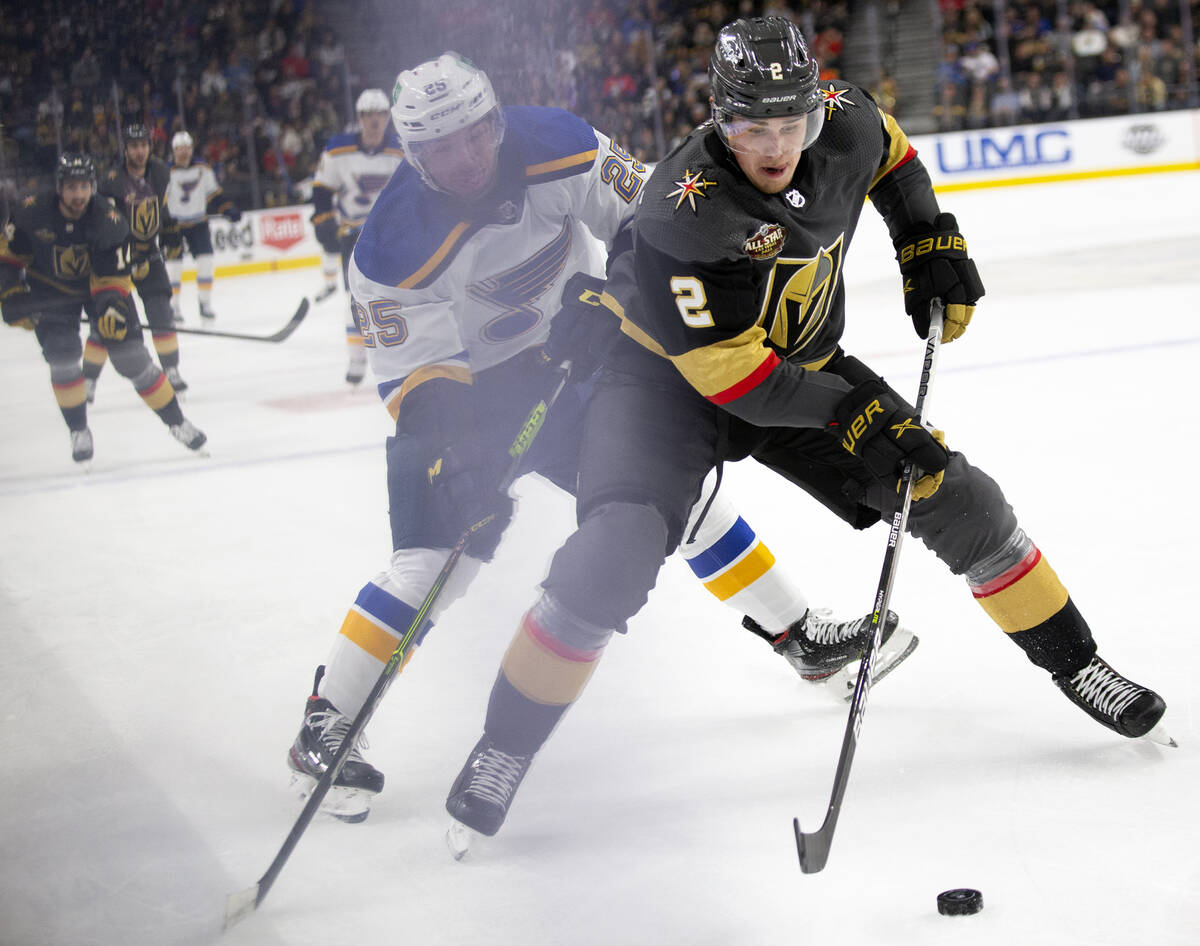 Golden Knights defenseman Zach Whitecloud (2) skates for the puck as Blues center Jordan Kyrou (25) catches up behind him during the second period of a NHL hockey game at T-Mobile Arena on Wednesday, Oct. 20, 2021 in Las Vegas. (Ellen Schmidt/Las Vegas Review-Journal) @ellenschmidttt

The Golden Knights locked up one of their best defenders Thursday.

The team announced that defenseman Zach Whitecloud signed a six-year extension with an average annual value of $2.75 million. The deal keeps Whitecloud under contract with the Knights through the 2027-28 season. He was scheduled to be a restricted free agent this summer.

Whitecloud, 24, is a developmental success story after joining the organization as a college free agent from Bemidji State University. He was called up for a game in Nashville on Feb. 1, 2020, and stuck in the lineup because of his poise, intellect and toughness.

Whitecloud doesn’t bring a ton of offense to the blue line — he has 14 points in 72 NHL games — but he limits chances at five-on-five and on the penalty kill. The Knights allowed 1.6 goals per 60 minutes with him on the ice at five-on-five last season, best among their defensemen.

Whitecloud is on injured reserve and considered week to week after suffering an upper-body injury in a 5-3 loss to the Edmonton Oilers on Oct. 23. He appeared to block a slap shot from Oilers defenseman Ducan Keith with his right hand, skated to the bench and didn’t return.

Whitecloud’s extension gives the Knights $74.24 million of salary-cap commitments next season. The upper limit is expected to be $82.5 million.

The Knights signed veteran defenseman Ben Hutton to a one-year contract worth $750,000 Thursday.

Hutton, 28, has appeared in 379 NHL games and scored 91 points. He played 38 games with Anaheim and Toronto last season and scored five points.

The left-shot defenseman also spent one season with the Los Angeles Kings and four with the Vancouver Canucks after being selected in the fifth round of the 2012 NHL draft.

Defensemen Daniil Miromanov and Kaedan Korczak were sent to the Silver Knights after the signing.

The Knights will wear specialty white jerseys in warmups before Friday’s 5 p.m. game against the Anaheim Ducks for Nevada Day. They then will be on sale during the first period. The team also will have locker nameplates and pucks available outside of Section 10 at T-Mobile Arena.

The Silver Knights also will wear Nevada Day-themed jerseys for their game at 11 a.m. Friday against Bakersfield at Orleans Arena. They are the first specialty jersey in franchise history.