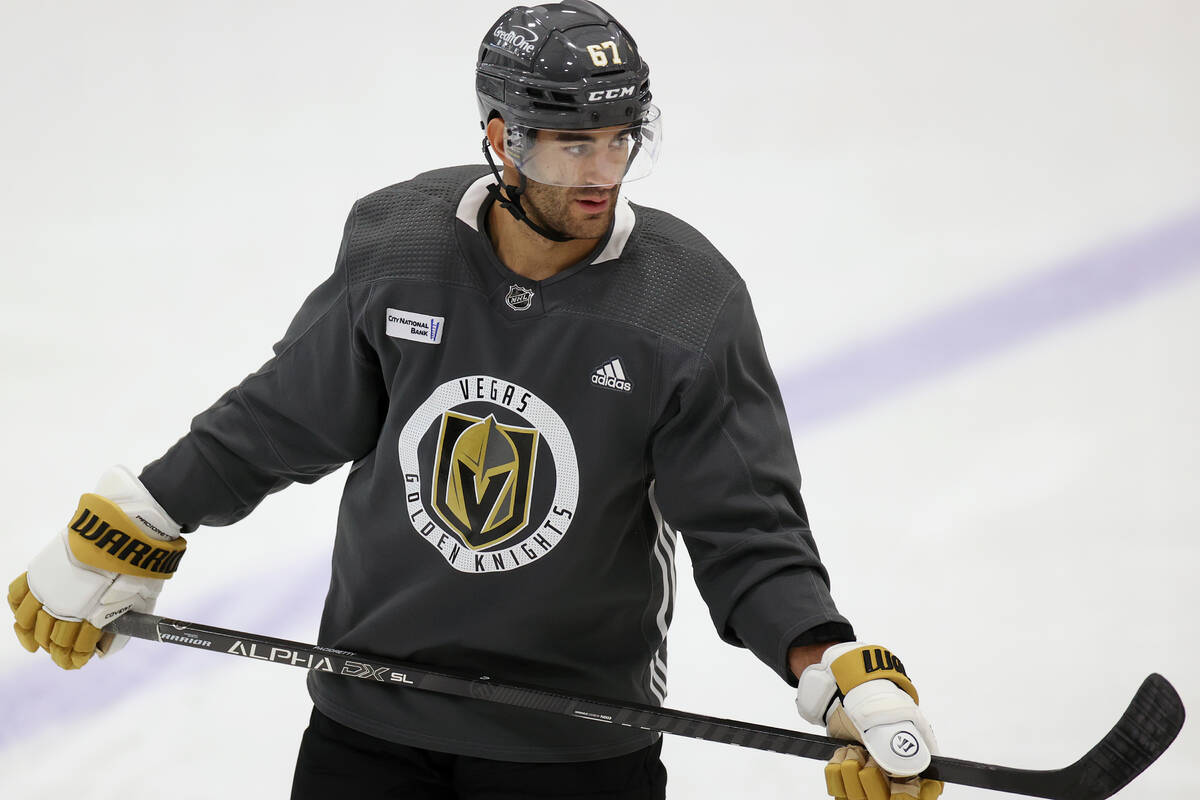 Add another key injury to the Golden Knights’ list this season.

The Knights said Thursday left wing Max Pacioretty underwent successful wrist surgery and will be out indefinitely. The 33-year-old previously missed 17 games because of a broken bone in his foot.

Injuries have been the only thing that have slowed Pacioretty this season. He has 12 goals and nine assists in 21 games. Only left wing Jonathan Marchessault has more goals (16) on the Knights despite the time Pacioretty has missed.

The news overshadowed what was otherwise a day featuring positive developments for the team. Defenseman Alex Pietrangelo and right wing Evgenii Dadonov left the NHL’s COVID-19 protocol, and center Nolan Patrick appears to have a chance to play in Friday’s game against the Anaheim Ducks at T-Mobile Arena.

“Both critical parts of our team,” assistant coach Steve Spott said of Pietrangelo and Dadonov. “You’re bringing back two quality players and two veterans. Both real good additions for us tomorrow against a good team.”

Pietrangelo and Dadonov returned sooner than expected after entering the COVID-19 protocol Dec. 21. A rule change by the NHL and NHL Players’ Association on Wednesday allows fully vaccinated personnel to return in five days rather than 10 if certain conditions are met.

That let Pietrangelo and Dadonov return to practice Thursday after missing two games. Pietrangelo is the Knights’ No. 1 defenseman and averages more ice time (25:43) than any other skater on the team.

Dadonov has eight goals and six assists in 31 games in his first season in Las Vegas after being acquired in an offseason trade with Ottawa.

The Knights still have coach Pete DeBoer and center Brett Howden in the COVID-19 protocol. Both went in Monday.

“(Pietrangelo) really is one of our true leaders,” Spott said. “It’s great to have him back. And then (Dadonov), he plays extremely hard. He plays on our power play, and I know he’s chomping at the bit to get back as well.”

Patrick could give the Knights a third returning player against Anaheim. The 23-year-old hasn’t played since Oct. 22 because of an upper-body injury. He fully participated in Thursday’s practice and also got work on the power play, indicating he could rejoin the lineup Friday.

“Everything’s gone really well for Nolan,” Spott said. “I’ll have a chance now to speak with (general manager) Kelly (McCrimmon) and Pete this afternoon and then make a final decision on whether or not he has the green light to play tomorrow.”

The Knights could use the extra help without Pacioretty. Captain Mark Stone is on injured reserve with an undisclosed injury. Goaltender Robin Lehner and defenseman Nic Hague were the other two players who didn’t participate in Thursday’s practice.

Lehner has missed two straight games with a lower-body injury. Hague missed the team’s Dec. 21 loss to the Tampa Bay Lightning with an injury, but returned to play in Tuesday’s win against the Los Angeles Kings.

Any absences probably will be felt against Anaheim. The Ducks are 1-0-1 against the Knights and are one point behind them in the Pacific Division standings.

“They have fast, skilled forwards,” center Nicolas Roy said. “Young guys but really skilled. We have to keep our defensive game a little bit more and play more our game.”