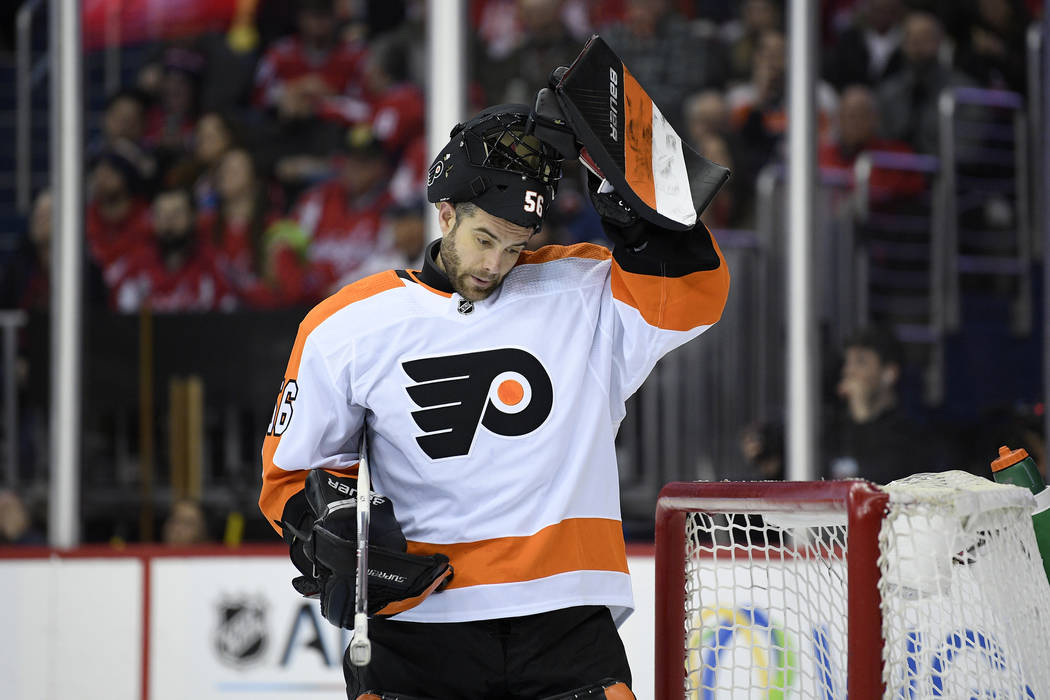 Philadelphia Flyers goaltender Mike McKenna (56) stands on the ice during the second period of an NHL hockey game against the Washington Capitals in Washington on Tuesday, Jan. 8, 2019. (AP Photo/Nick Wass, File)

Mike McKenna is not coming out of retirement.

McKenna, who hung up his goaltending gear in August after 14 seasons as a professional, was back in the crease Monday during the Knights’ practice at City National Arena.

McKenna, who started his pro career with the Las Vegas Wranglers in the ECHL, was in net today at practice. (No Dylan Ferguson, who Gerard Gallant said Sunday wasn't feeling well.) #VegasBorn pic.twitter.com/ER7dJP8R82

The 36-year-old filled in while Dylan Ferguson remained sidelined with an undisclosed injury or illness. Marc-Andre Fleury did not participate in either of the two practices, leaving the Knights with three available goaltenders.

McKenna started his career with the Las Vegas Wranglers of the ECHL in 2005 after he spent four seasons at St. Lawrence University.

He appeared in 35 games for seven NHL organizations and spent the majority of his career in the American Hockey League. Last season, McKenna played for Ottawa (10 games) and Philadelphia (one game), and he also suited up for AHL clubs Belleville and Lehigh Valley.

The Knights hired the personable native of St. Louis last month to serve as the studio analyst for its pregame, intermission and postgame shows.

McKenna also will appear in several other media platforms for the team, but don’t expect him to serve as the team’s emergency goaltender.

The Knights lost two of their top penalty killers from last season (Pierre-Edouard Bellemare and Ryan Carpenter), and coach Gerard Gallant added an intriguing name to the list of possible replacements.

Winger Alex Tuch is expected to play in short-handed situations after rarely killing penalties during his first two seasons in the league.

Tuch logged 27 seconds of ice time on the penalty kill last season, but his speed and reach could make him a threat during 5-on-4 situations.

“You try and make different guys,” Gallant said. “We’ll see. There’s exhibition games for that later on. But I bet Alex Tuch is going to get some looks in the preseason.”

One other move Gallant divulged is Nate Schmidt will slide back to right defense. Schmidt has been paired with rookie Nic Hague, a left defenseman, through the first four days of training camp.

The Knights did not announce their roster for Tuesday’s game at Colorado, but Gallant indicated goaltender Garret Sparks will start.

Sparks went 8-9-1 as the backup for Toronto last season and was acquired by the Knights in July.