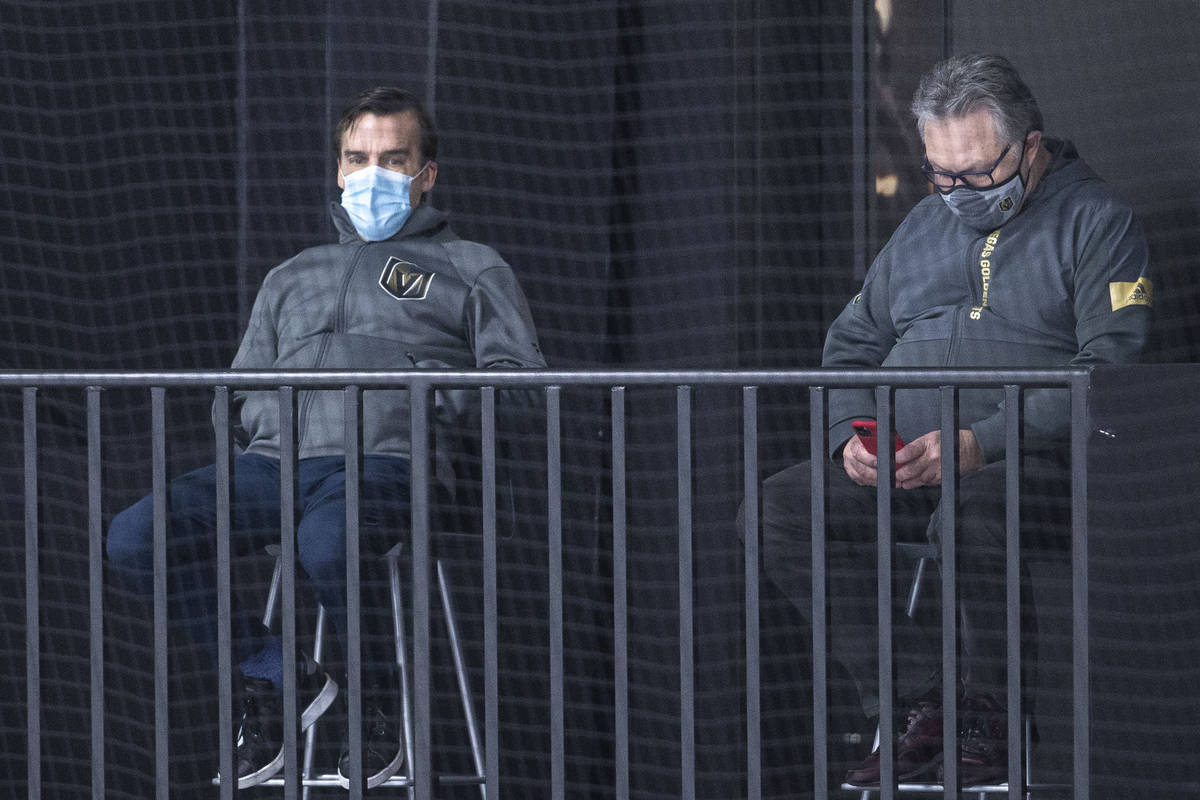 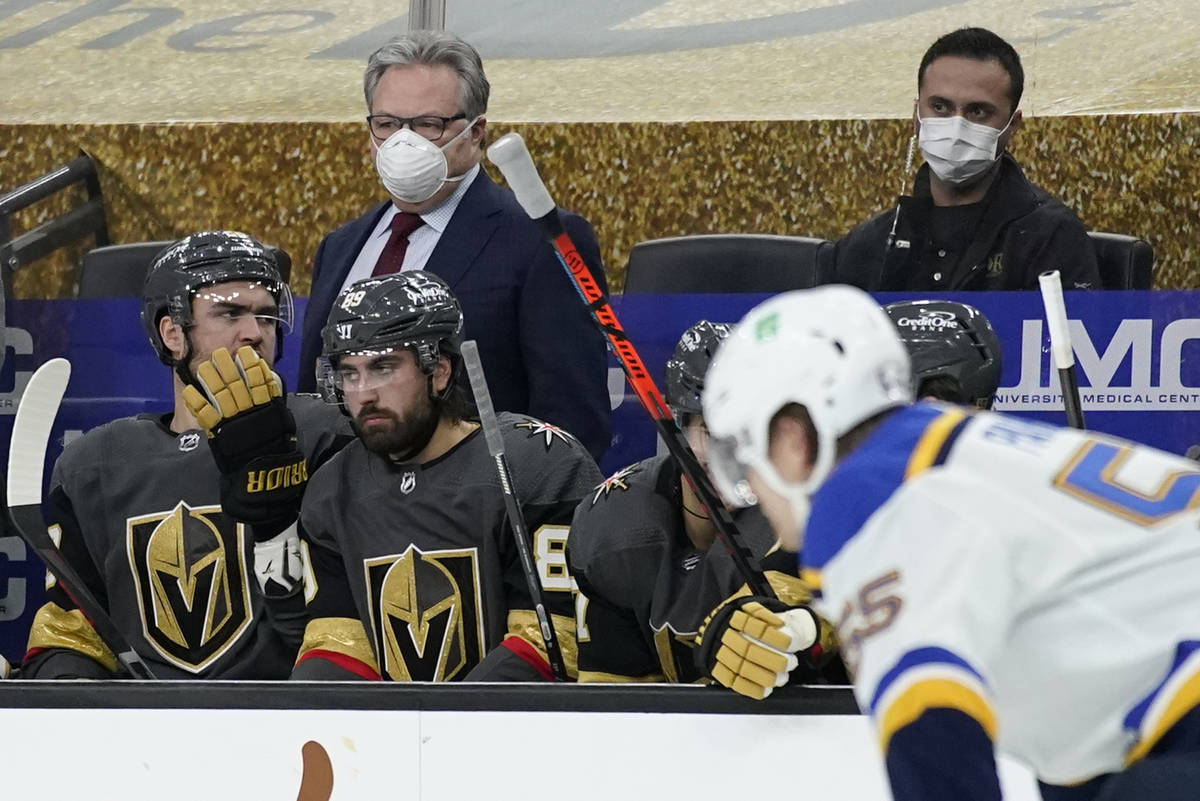 The Golden Knights haven’t just made a splash at the trade deadline in previous years. They’ve done a running cannonball into the deep end.

Whether it was winger Mark Stone in 2019 or goalie Robin Lehner last season, president of hockey operations George McPhee and general manager Kelly McCrimmon showed they aren’t afraid to swing big in an attempt to improve the roster.

Even when they whiff, such as the failed pursuit of defenseman Erik Karlsson in 2018, it attracts attention.

But with the Knights (20-6-1) leading the NHL in points percentage entering Thursday’s games and showing few weaknesses, McCrimmon told the Review-Journal his plan leading up to the April 12 deadline won’t be like it was in the past.

“I feel our situation with our roster makeup is different this year,” McCrimmon said. “I feel this roster is closer to what we want it to look like. That’s how I would say it.”

McCrimmon said the Knights entered last season seeking to add a forward and a defenseman and acquired Chandler Stephenson and Alec Martinez. As the season went along, the decision was made to improve the goaltending position, and the Knights traded for Robin Lehner on deadline day, along with forward Nick Cousins.

Stone was too good to pass up when he became available from Ottawa two seasons ago, and the Knights made moves for forwards Ryan Reaves and Tomas Tatar during their inaugural season.

“We’re in this position by choice,” McCrimmon said. “It’s what we wanted to do with our roster. We like our roster, and I believe our approach will be quite different based on that.”

The Knights are without defenseman Alex Pietrangelo for the “foreseeable future” after he blocked a shot late in a March 6 victory. Pietrangelo was seen during Monday’s TV broadcast with a cast on his left hand/arm and went on long-term injured reserve Wednesday.

Forward Alex Tuch, the team’s second-leading goal scorer, and Stephenson are sidelined with no timetable for their return.

But if McCrimmon wanted to plug one of those holes or add to the depth with, say, a bottom-six forward, he is limited in what he can do.

“The conversation starts with the salary cap,” McCrimmon said.

The Knights are projected by CapFriendly.com to have $141,480 of deadline cap space. For comparison sake, Florida can take on contracts at the deadline that total more than $16 million in average annual value.

That means any deal the Knights make would likely need to involve similar salary heading the other way to remain compliant.

“We were able to accrue some space last year that we don’t have the opportunity to accrue this year,” McCrimmon said. “If you have a player in (long-term IR) at the trade deadline that’s going to be on (LTIR) for the balance of the year, that’s one way a team can gain space. I think you see a few situations around the NHL right now that are like that. Failing that, the math all has to work.”

The Knights hit the 20-win mark in their last outing, joining Carolina and Tampa Bay in that club, and reach the midpoint of the 56-game schedule Friday when they meet the Los Angeles Kings at Staples Center.

They are second overall in goal differential (plus-29) and goals allowed per game to go with an offense that ranks seventh at 3.33 goals per game.

“We’re pleased with our record and yet continuously looking for ways to grow as a team and improve as a team,” McCrimmon said.

The team’s goaltending has garnered much of the spotlight because of the play of Marc-Andre Fleury, who is enjoying a renaissance at age 36 after the Knights looked at trading him during the offseason. Former Pittsburgh Penguins general manager Jim Rutherford told The Athletic this week he tried as hard as he could to pry away Fleury.

Fleury started 17 of the past 18 games while Lehner was sidelined with a concussion and leads the league in save percentage (.933). He ranks second with a 1.87 goals-against average.

”Marc has been exceptional. As the last line of defense, he’s been a big part of why our record is what it is,” McCrimmon said. “It was a godsend that Marc-Andre was able to shoulder the load that he has.”

Lehner served as the backup to Fleury on Wednesday and is on track to start either Friday or Sunday against the Kings.

McCrimmon expects coach Pete DeBoer and goaltending coach Mike Rosati to return to “a rotation of some kind” once Lehner gets game action under his belt. The Knights play seven more times this month and have 17 games in April.

”We’re looking forward to Robin’s return shortly,” McCrimmon said. “That’s going to give us exactly what we were hoping for going into the season: two really good goaltenders to shoulder the load for us.

“We think there’s no bad choice. We think that we’ve got two really good goaltenders and lots of hockey to keep them both in a good groove.”