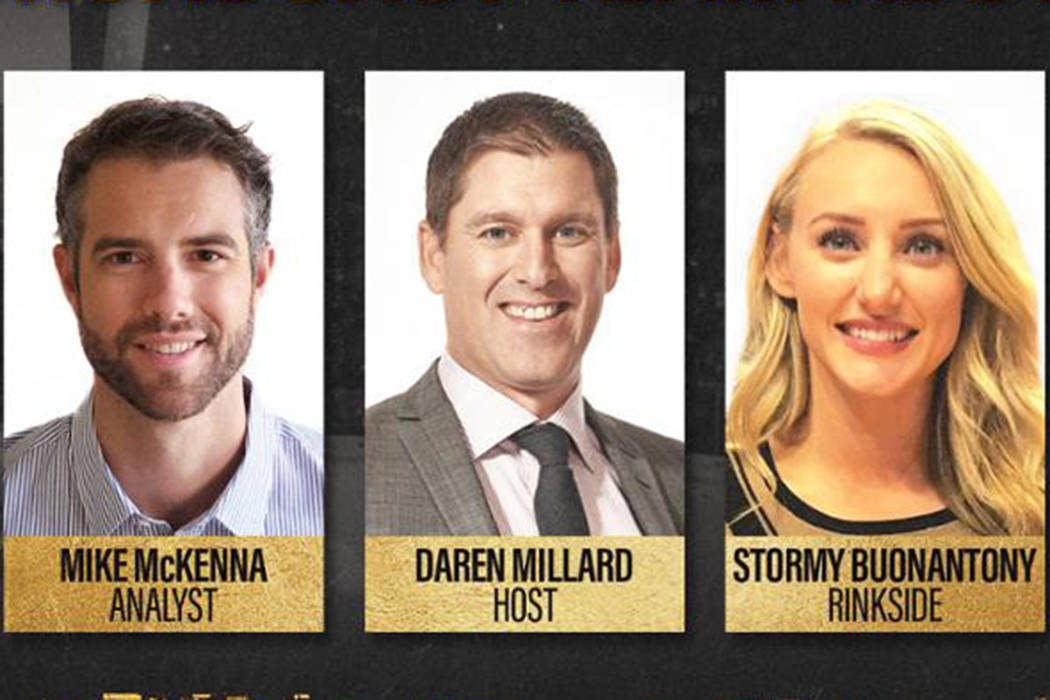 The Golden Knights’ new broadcast team has a local feel.

Daren Millard also was added to the broadcast team and will host the pregame, intermission and postgame shows on AT&T SportsNet Rocky Mountain.

Our family is very excited to make the valley our home. @GoldenKnights are trend setters on and off the ice. I cannot wait to work with with @garylawless @ShaneHnidy @DavidCGoucher @Dan_DUva along with fellow rookies @StormBuonantony @MikeMcKenna56 on @ATTSportsNetRM #VegasBorn

Darren Eliot, the team’s vice president of hockey programming and facility operations, will appear as an analyst in select games.

The new faces were unveiled a day after the Review-Journal reported that studio host Nick Gismondi, analyst Brad May and rinkside reporter Alyson Lozoff would not return to the team’s TV broadcasts.

“We are very excited for Daren Millard, Mike McKenna and Stormy Buonantony to join our broadcast team and to have Darren Eliot take on an increased role,” team president Kerry Bubolz said in a statement. “The group will deliver unique insights and engaging commentary to our audiences.”

Buonantony also will host the weekly “Knight Life” show and takes over for Lozoff, who was hired Thursday as the Anaheim Ducks’ rinkside reporter.

🚨LIFE UPDATE🚨 This #VegasBorn girl is coming home! I could not be more excited & honored to officially confirm I have accepted a position with the NHLs Vegas @GoldenKnights as the team’s Rinkside Reporter & “Knight Life” Host on AT&T SportsNet. More⤵️ https://t.co/gGxQWkJaba pic.twitter.com/tIosc1uAdR

Buonantony, 27, was the in-stadium emcee and broadcast reporter for the Carolina Panthers and also was a college football and basketball sideline reporter for several cable networks, including ESPN and Fox Sports.

Before that, the graduate of Palo Verde High and San Diego State spent three years as a host and reporter for the Mountain West.

“Five or 10 years ago, the idea of working for a professional team in Las Vegas didn’t exist, so this is better than a dream job,” Buonantony said. “When I get into something, I go all-in, so I’m excited to make this my sole focus. My primary goal is to be as relatable as I can.”

The affable McKenna, 36, announced his retirement Tuesday after a 14-year pro career that started with the Wranglers of the ECHL.

He was drafted by Nashville in the sixth round in 2002 and amassed an array of stories while playing for 15 NHL organizations.

“It’s truly amazing to be able to come full circle like this,” McKenna said. “It’s something exciting, and it combines things that I love in life. Bringing the knowledge of the game to fans and being able to share all the fun and the joy that I’ve had over the years.”

Millard, 49, takes over for Gismondi as studio host after a decorated 20-year career with Sportsnet in Canada. He hosted “Hockey Central @ Noon,” “Wednesday Night Hockey” and other NHL studio shows, and covered a range of sports before leaving the network in August 2018.

Millard is a native of Brandon, Manitoba, and is familiar with incoming Knights general manager Kelly McCrimmon, who owns the Western Hockey League’s Brandon Wheat Kings.

To the Vegas Golden Knights Fans and especially the city and the community…I can’t express how much you’ve all meant to me! Your passion and genuine care will always count as one of the greatest experiences in my… https://t.co/x3895j95SD

“Our family is very excited to make the valley our home. The Golden Knights are trend setters on and off the ice,” Millard wrote on his Twitter account.

Gismondi thanked Knights fans on his social media accounts for their support.

“I can’t express how much you’ve all meant to me!” he wrote. “Your passion and genuine care will always count as one of the greatest experiences in my 24-years as a broadcaster. I’m sad this chapter has closed, but I’m looking forward to what’s next!”