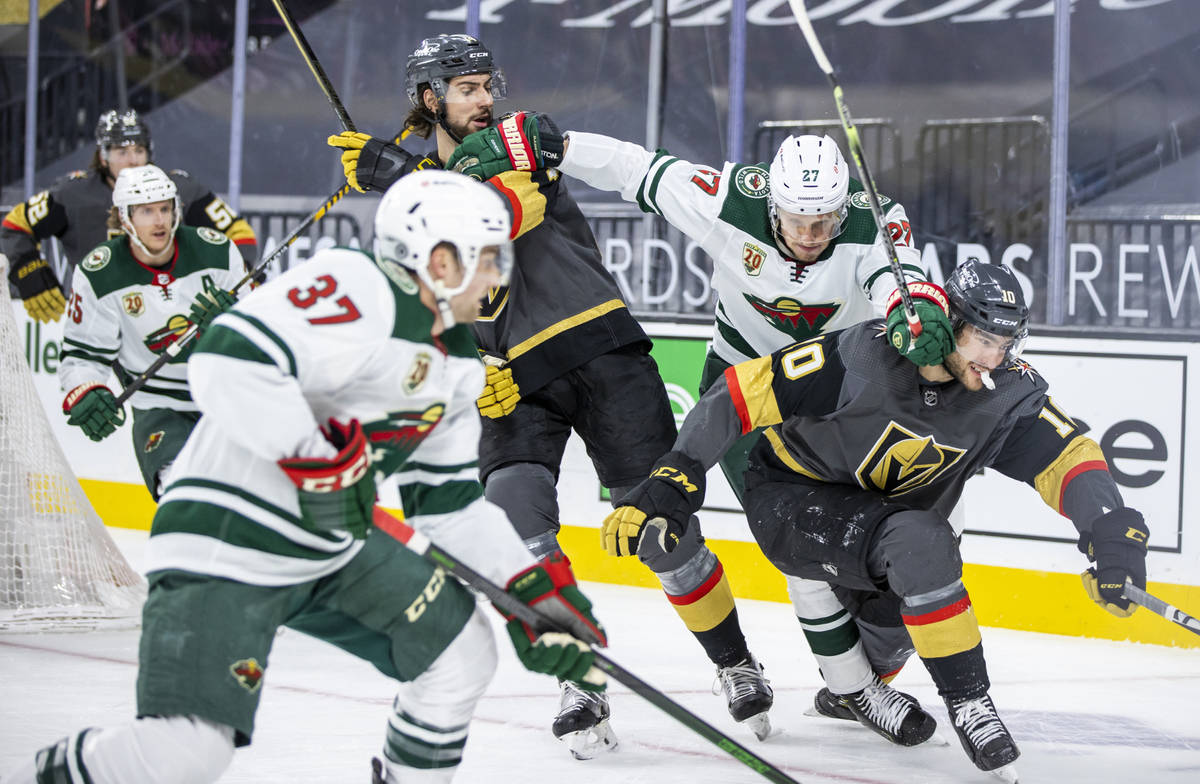 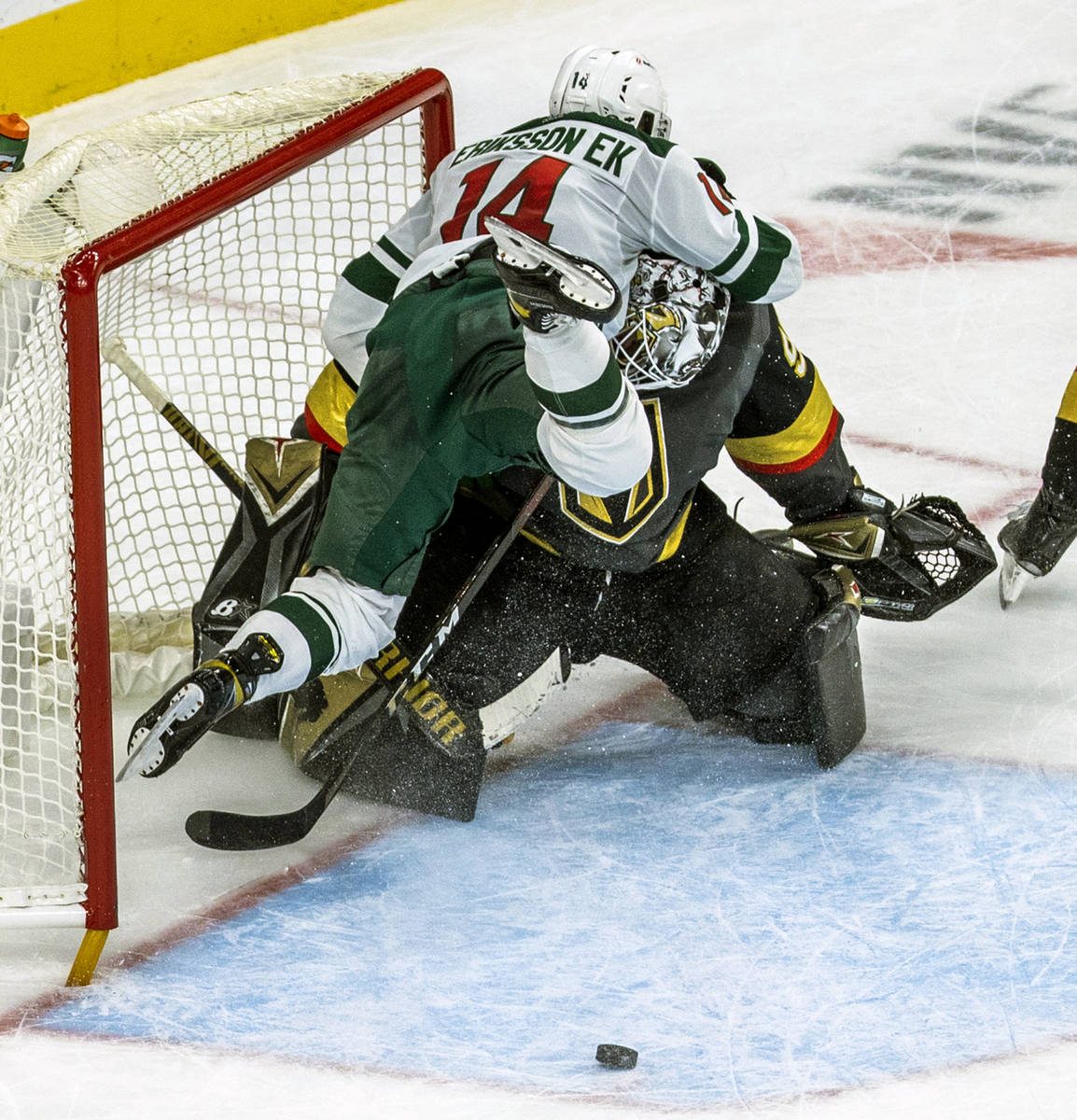 If the 13-forward, five-defenseman lineup the Golden Knights used early in the season sounded weird, get a load of what happened Thursday.

After a chain of events that left the Knights short-handed for the second straight game, they rolled with 10 forwards and six defensemen during a 3-2 shootout loss to the Minnesota Wild at T-Mobile Arena.

“That’s the reality of the salary cap world,” coach Pete DeBoer said. “You get injuries, suspensions. All the teams that are up against the cap, you look around the league, a lot of them have nights where they’ve got to dress a guy or two short. Wasn’t an issue tonight. I thought we got a great effort. Just unfortunate we didn’t get two points.”

How did the Knights end up in this situation?

The saga started Wednesday when forward Ryan Reaves was a late scratch with a lower-body injury, forcing the Knights to play one skater short in a 4-2 loss to the Los Angeles Kings.

Reaves was not available Thursday against the Wild, and because the Knights played with fewer than 18 skaters the previous game, they were allowed to use the roster emergency exception rule to recall a player with a salary cap hit of $1 million or less. That spot went to defenseman Dylan Coghlan.

However, center Chandler Stephenson was suspended for three games and defenseman Zach Whitecloud missed the game with an undisclosed injury, leaving the Knights short two skaters.

But without the necessary salary cap space, the Knights were unable to recall any reinforcements. CapFriendly.com has the Knights with a little more than $400,000 in cap space, while the minimum salary is $700,000.

The result was the wacky 10-forward, six-defenseman lineup that pulled out a point against the Wild and moved into a share of first place in the West Division with the Colorado Avalanche.

“From a coaching perspective, guys are always looking for a few more minutes every night,” DeBoer said. “It was nice to not have that as an issue.”

Since the Knights played short Thursday, they can use the roster emergency exception to recall two players and field a full lineup for Saturday’s rematch against the Wild.

Center Patrick Brown is likely to be added, and other possibilities include forwards Gage Quinney, Danny O’Regan and Dylan Sikura.

“It’s not ideal to have to start that way. I think it changes the way we play,” winger Reilly Smith said. “We got one point; we would have loved two. But it is what it is. We just have to move on.”

On the first chance, Kolesar took a feed from Smith on a two-on-one and Talbot slid across his crease to make a spectacular glove save.

The Knights won the ensuing faceoff, and defenseman Shea Theodore threw a shot on net that Talbot didn’t handle cleanly. Kolesar swooped in for the rebound, and his backhand was ticketed for the net until Talbot reached out and knocked the puck out of the air with the blade of his stick.

“They see the effort that he gives every night,” DeBoer said. “He doesn’t need a lot of communication from me after he misses a shot like that. He gets a lot of feedback from the guys on the bench to keep his head up and stick with it. We got a good group that way.”

Nic Hague said after the morning skate he wanted to clean up his penalty problems. But the defenseman took two more minors Thursday, and it cost him ice time in the third period.

Hague was stapled to the bench for the final 11:52 of regulation and overtime as the Knights tried to preserve at least a point.

Coghlan didn’t leave the bench for the final 7:06 of the third period and the entire OT as DeBoer went with four defensemen.

The Knights didn’t give up a goal in the first two minutes for the first time in four games.

They also scored the first goal for the first time in four games when William Karlsson converted at 3:29 of the first period.

Karlsson has scored in each of the past two games and has a three-game points streak. He has 10 goals in 35 games after notching 15 in 63 appearances last season.