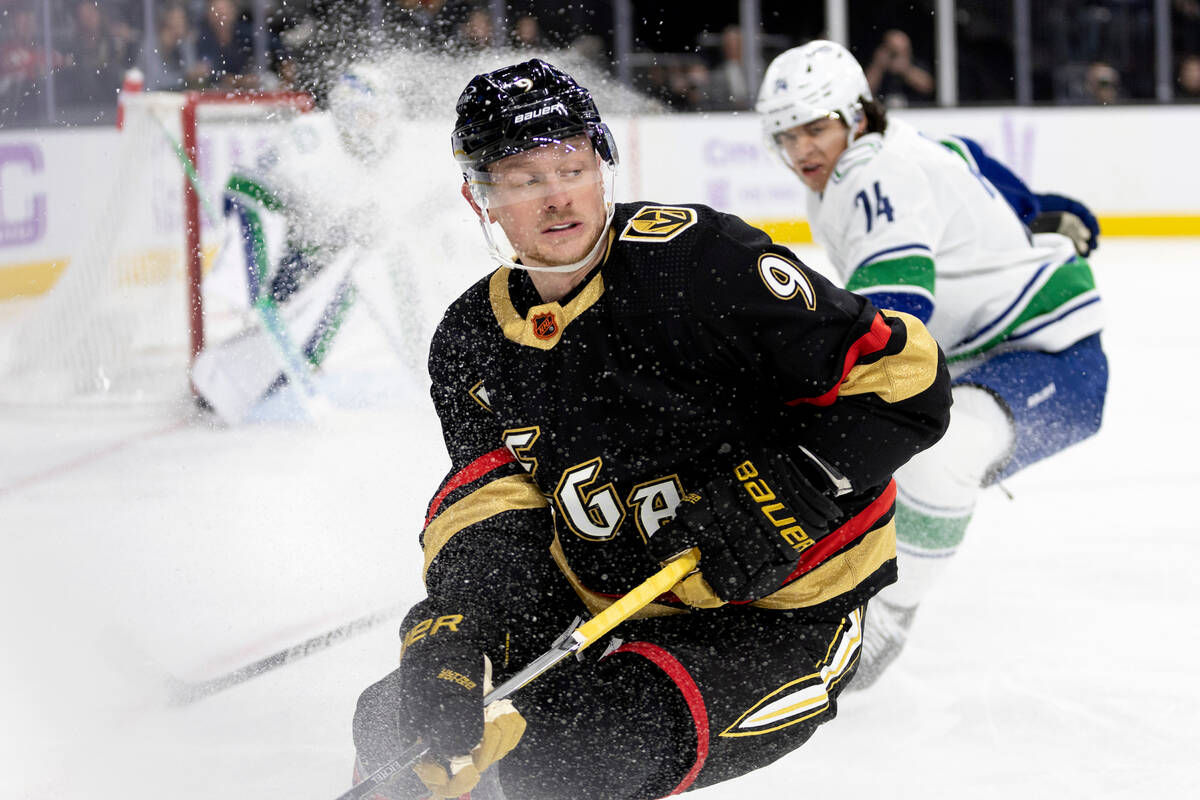 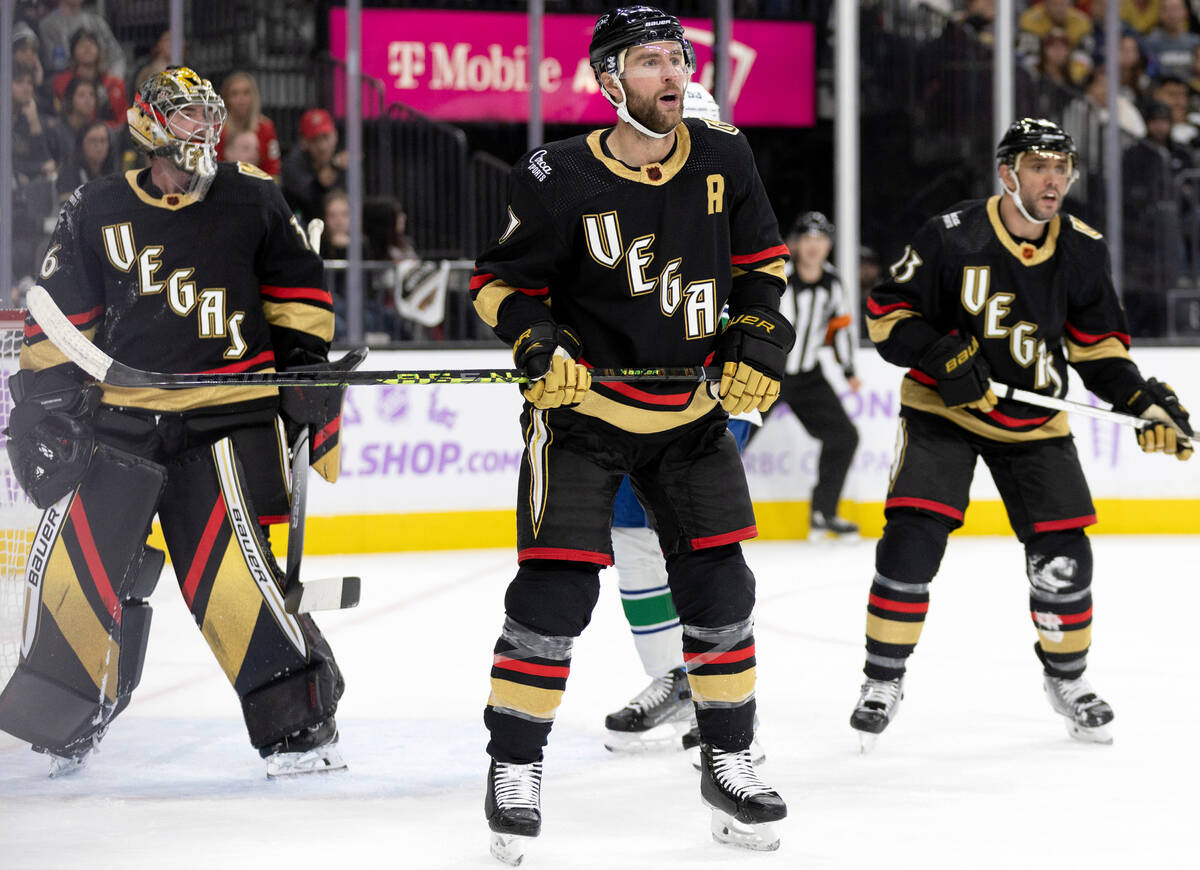 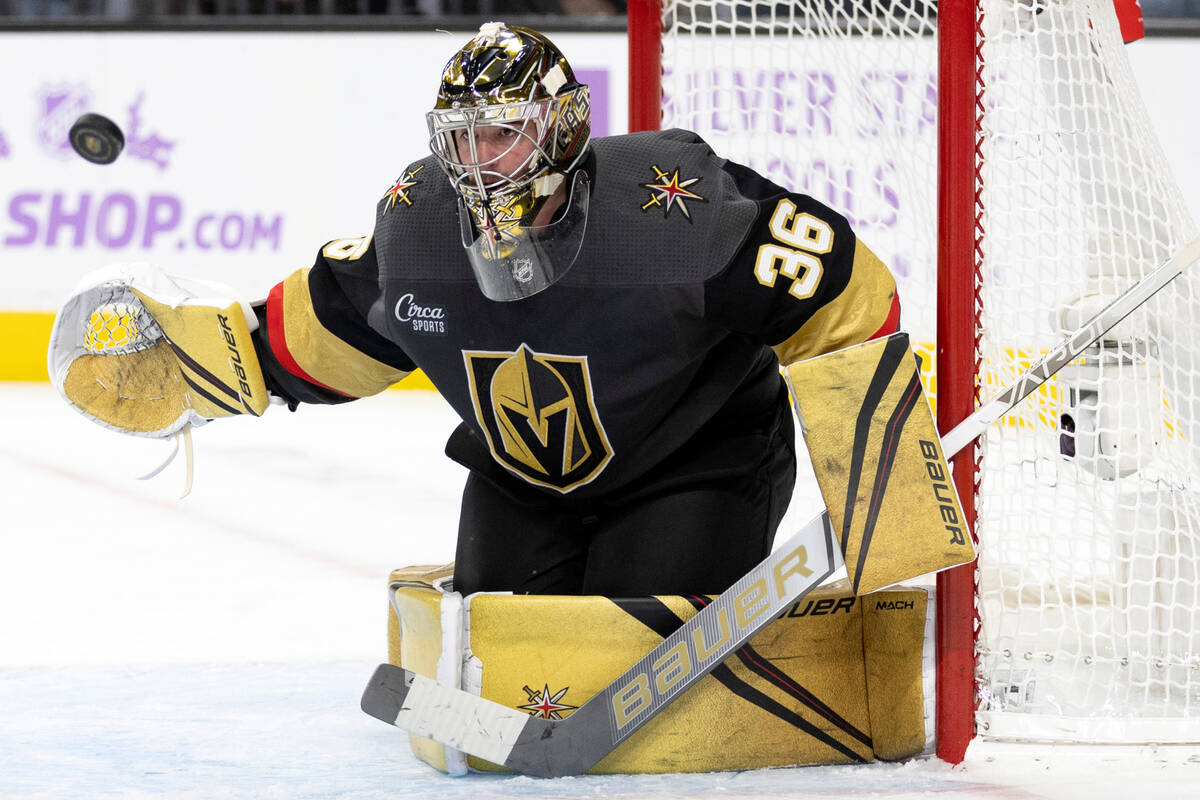 Golden Knights goaltender Logan Thompson (36) prepares to make a save during the second period of an NHL hockey game against the Senators at T-Mobile Arena on Wednesday, Nov. 23, 2022, in Las Vegas. (Ellen Schmidt/Las Vegas Review-Journal) @ellenschmidttt

Reilly Smith twirled his hand in the air as if to say “Wrap it up.”

It wasn’t immediately clear what he was referring to Monday after scoring a shootout winner against the Boston Bruins.

The Golden Knights’ four-game trip, which they finished 3-1 to give them a NHL-leading 25 road points? The Bruins’ home winning streak, which was at 14 games to start the season before the Knights came to town?

Ultimately, it doesn’t matter. What counts is the confidence and belief the Knights keep showing night after night. That’s what happens when they find a way to win against the league’s best team without two of their best players in center Jack Eichel and defenseman Alex Pietrangelo.

The Knights, one third of the way through the season, have the NHL’s third-best record at 19-7-1. They’re atop the Pacific Division and Western Conference. Memories of last season’s playoff miss are fading into the background.

There are a lot of reasons for the impressive turnaround, including health and the influence of first-year coach Bruce Cassidy. Here’s a look at the Knights’ performance:

Center Jack Eichel — He’s leading the team in scoring. He’s been excellent defensively. Eichel is doing it all for the Knights and showing why they made a blockbuster move to get him.

Left wing/center Chandler Stephenson — He’s on pace to match his career-high 64 points from last season. He remains a bargain at a $2.75 million cap hit.

Right wing Mark Stone — The most important stat for the Knights’ captain? Zero missed games. He’s healthy after his offseason back surgery. He’s also productive with 21 points and a plus-13 rating at five-on-five, tied for the team lead.

Right wing Jonathan Marchessault — He has 10 goals, putting him on track to score 30 for the second season in a row. The 31-year-old also hit an important milestone this season by playing in his 500th NHL game.

Left wing Reilly Smith — He’s second on the team with 12 goals, including an NHL leading three short-handed. He has more short-handed goals on his own than 20 NHL teams do.

Center William Karlsson — His production is up after he had his worst offensive season with the Knights in 2021-22. His six goals and 18 points are in line with what he’s done in a typical season.

Center Nicolas Roy — He’s provided important secondary scoring with 13 points in 24 games. The Knights have to be happy with the five-year extension they signed him to in August.

Left wing William Carrier — He has eight goals. His career high is nine. It’s been that kind of season for the fourth-line grinder, who is so hot he even got power-play time at one point.

Right wing Keegan Kolesar — His line has been successful, but he hasn’t found the scoresheet as often. He has four points after scoring a career-high 24 a year ago.

Left wing Paul Cotter — He’s had ups and downs as a rookie, including being a healthy scratch for three weeks. He’s coming off the first two-goal game of his career in Boston. The Knights need him to build off that.

Center Brett Howden — He scored three points in 21 games before going on injured reserve (lower-body). He has one goal after matching his career high with nine last season.

Center Jake Leschyshyn — The rookie doesn’t have a point in eight games, but also hasn’t been on the ice for a goal against. He played only twice before Nov. 21.

The Knights have been getting a star performance from Eichel, but a huge part of their success has been depth.

They have 11 players with 11 points or more. Only four other teams can say that. The one sore spot for most of the season has been the ever-rotating cast Kessel has played with on the third line. Roy was moved there recently to change that, but there is still work to be done.

Alex Pietrangelo — He’s leading the Knights in ice time, is tied for second in scoring with 21 points and is handling difficult matchups each night. He’s been excellent.

Shea Theodore — He’s thrived playing second-pair minutes, but was also great in an elevated role with Pietrangelo out the past four games for personal reasons. He’s on pace for a career high in points.

Brayden McNabb — Another understated yet strong season from the stalwart defender. He and Theodore are plus-11 at five-on-five, tops among the blue line.

Zach Whitecloud — He isn’t dominating his third-pair matchups like he was last season. He has 23 penalty minutes, one off his career high.

Nic Hague — He’s minus-two at five-on-five after missing training camp because of contract negotiations. He has been much more disciplined, with only three minor penalties in 26 games.

Alec Martinez — He leads the NHL with 112 blocked shots. The next-closest player has 74. He’s been a great defensive partner for Pietrangelo and has already played more games (27) than he did last season (26).

Ben Hutton — He’s appeared only three times and averaged 10:27 of ice time. He provides veteran depth, but hasn’t been called on much.

Daniil Miromanov — He was solid in his first two appearances of the season. He’s been assertive offensively and hasn’t made too many defensive mistakes.

The Knights entered this season believing they should be in the conversation for the best blue line in the NHL, one through six.

They’ve backed that up.

The top two pairs have been rock solid with the talent of Pietrangelo and Theodore anchored by the steadiness of Martinez and McNabb. Whitecloud and Hague haven’t controlled their minutes together like they have in the past, but their track record suggests that should come.

Logan Thompson — Second in the NHL in wins (13). Ninth among goalies with at least five starts in save percentage (.921). He’s been everything the Knights could have asked for, and he’s one of the rookie of the year front-runners.

No one knew what to expect from the Knights in net with Robin Lehner out for the season. Thompson and Hill have shown there was little to worry about.

The two have combined to help the Knights post the fourth-best team save percentage in the NHL. The goalies aren’t holding the club back. Several times — like Monday in Boston — they’ve pushed the Knights to wins.

Power play — The Knights are tied for 16th in the NHL on the man advantage, an improvement from their 25th-place finish a year ago. They still aren’t getting a lot of chances. They rank 30th in penalties drawn.

Penalty kill — The Knights have dropped from 21st last season to 25th this season. Their four short-handed goals, tied for the second-most in the NHL, have helped limit the damage.

The Knights need to get better here if they want to go on another playoff run.

The penalty kill in particular needs to tighten up. The Knights have good killers in Smith, Karlsson, Stone, McNabb and Martinez. They shouldn’t be struggling this much.

Opponents are 6-for-18 (33.3 percent) on the power play against the Knights in their past five games.