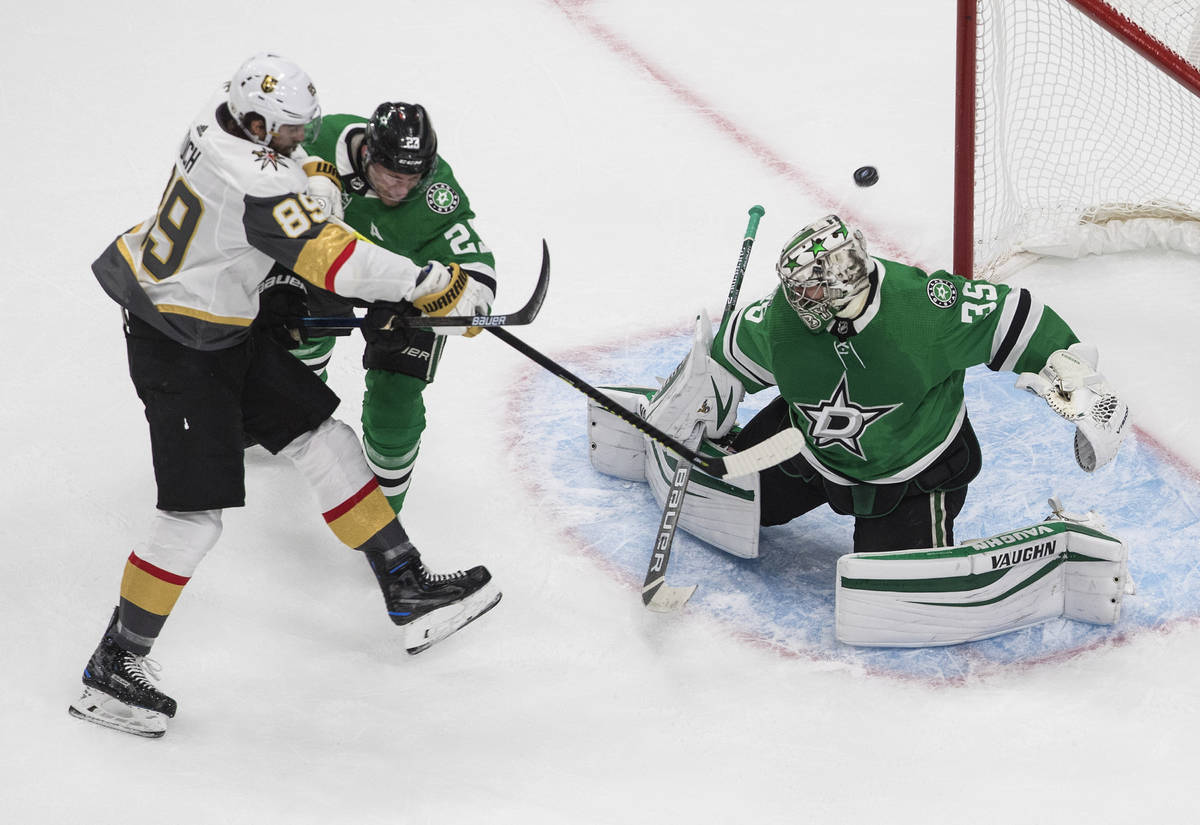 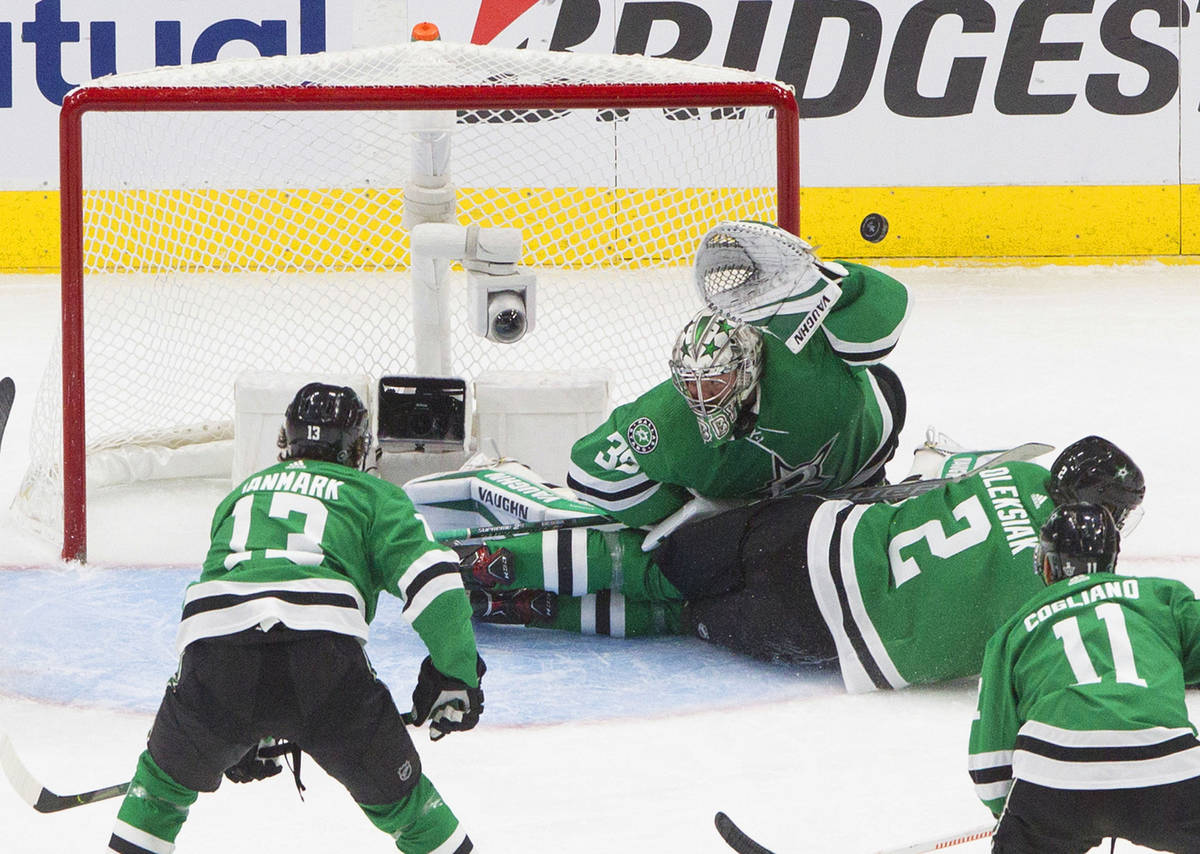 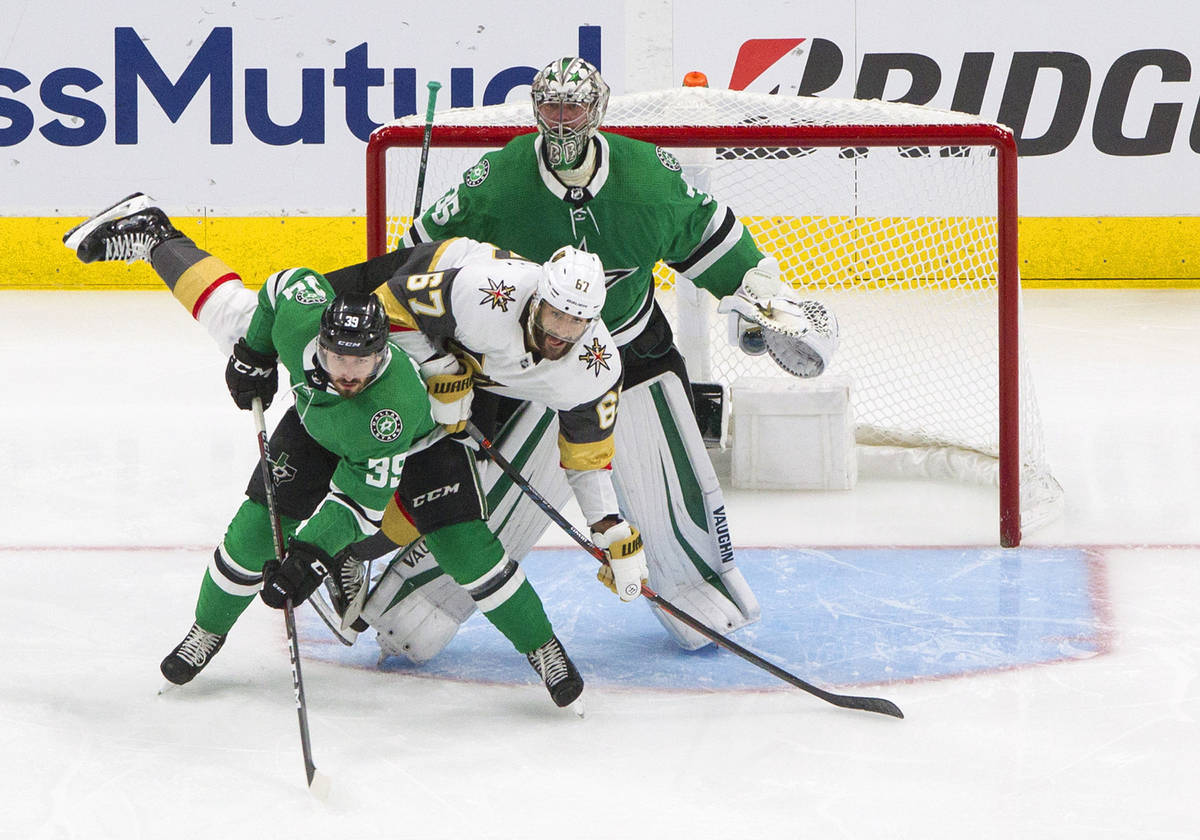 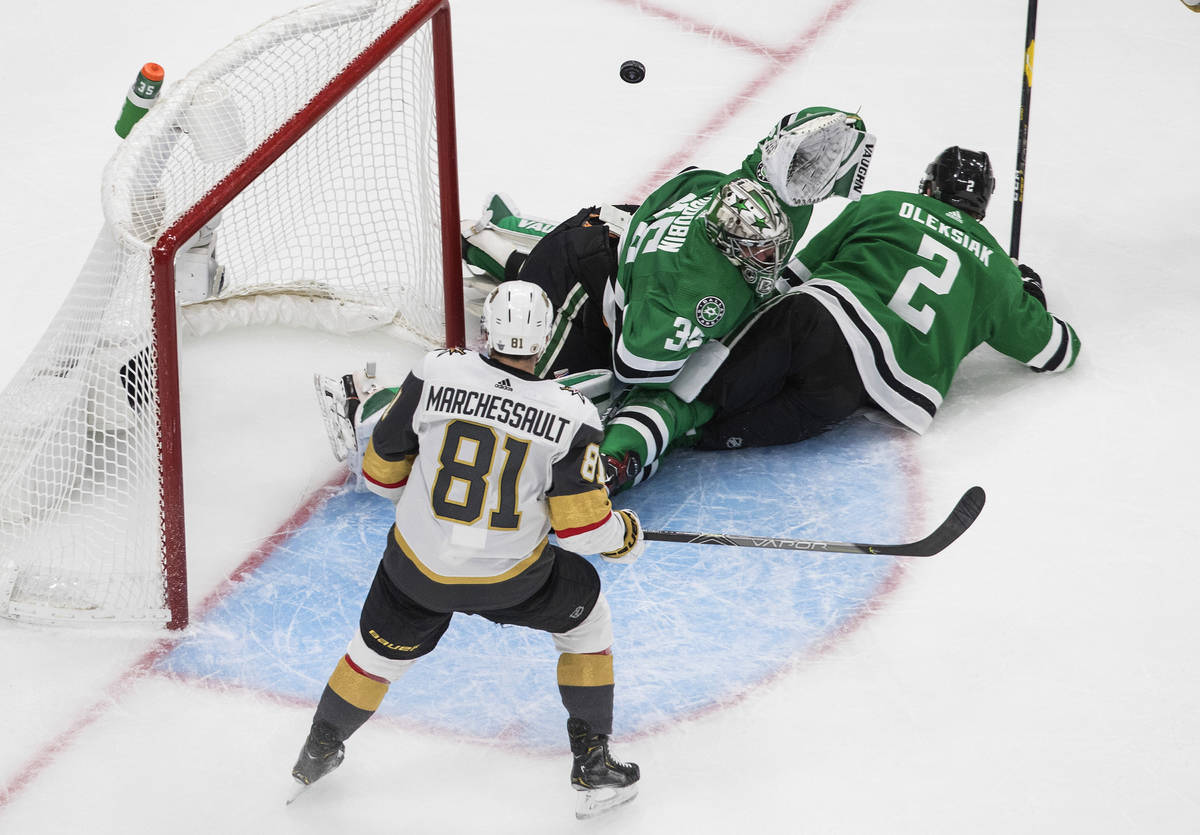 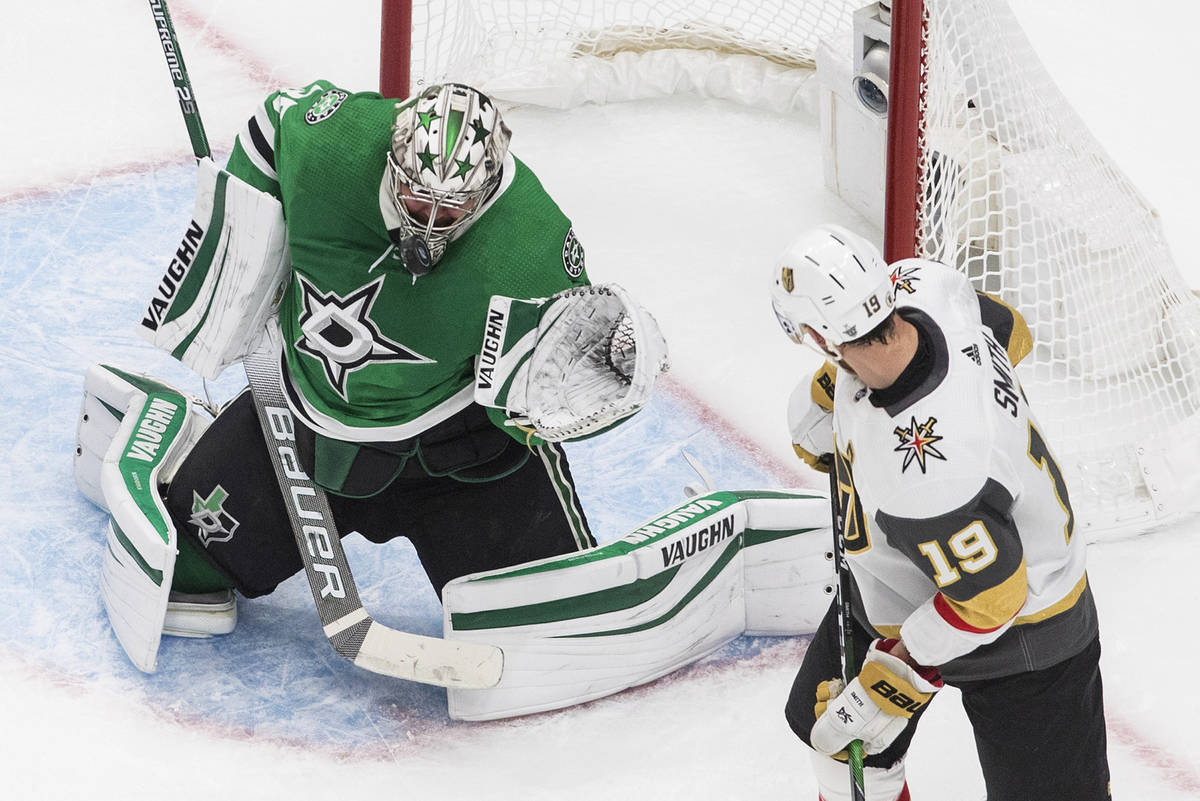 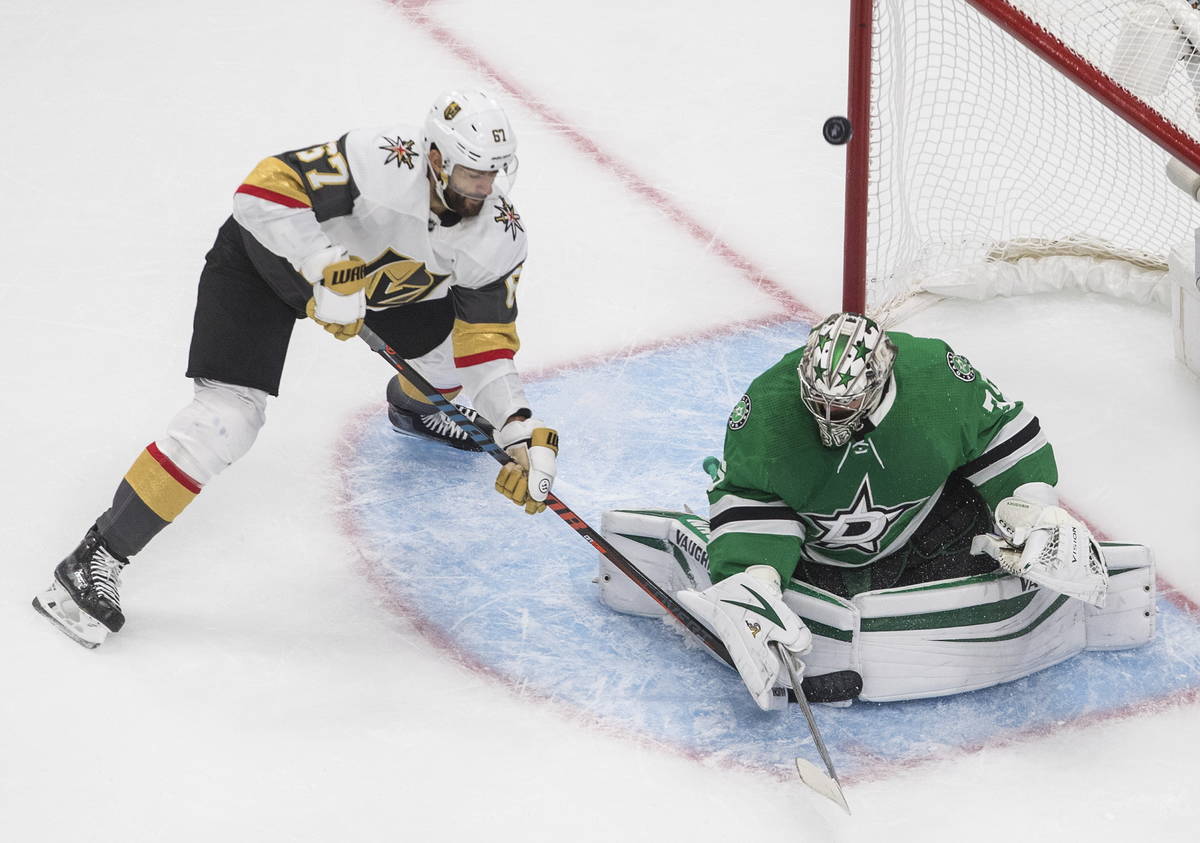 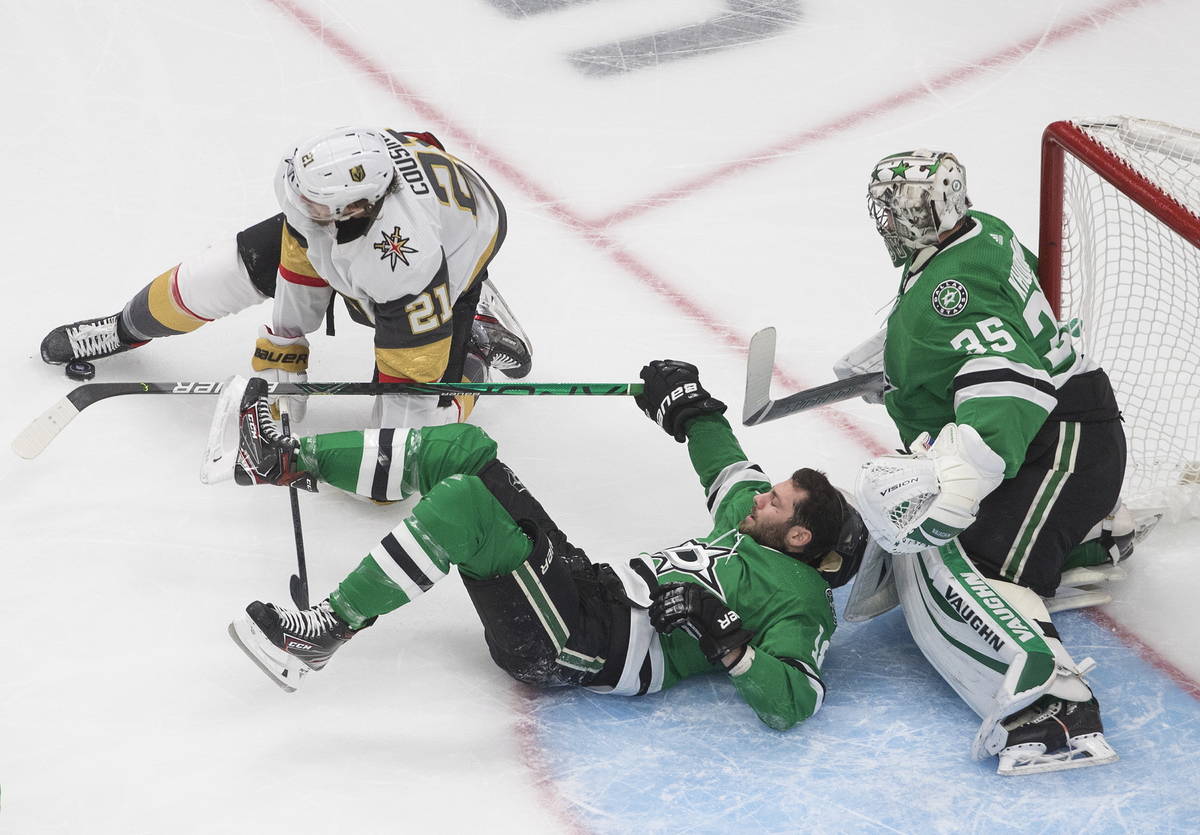 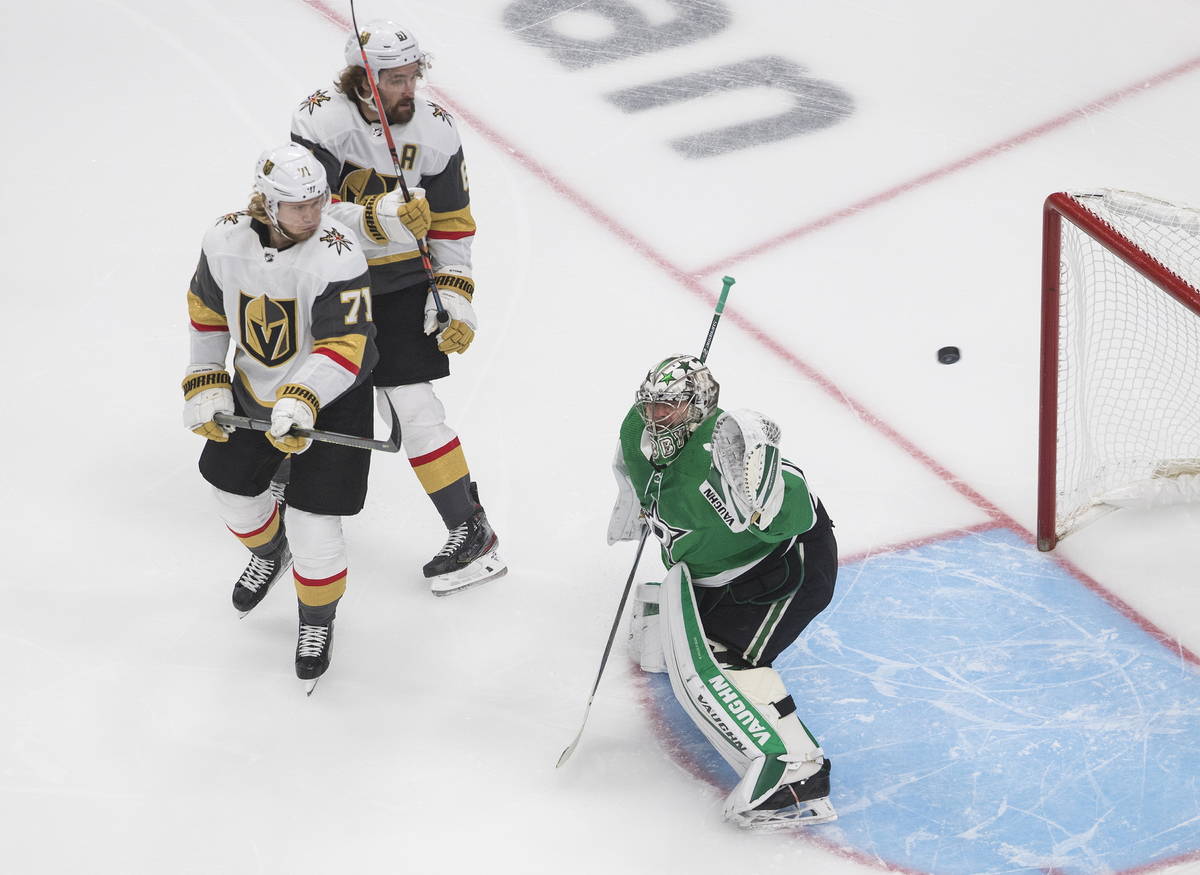 The Golden Knights’ chance to win the Stanley Cup was nearly derailed in the second round by a rookie goaltender making his postseason debut.

A journeyman netminder has them on the brink of elimination in the Western Conference Final.

The Knights’ inability to solve Dallas goalie Anton Khudobin continued to overshadow all other storylines entering Monday’s Game 5 in Edmonton, Alberta, with the Stars holding a 3-1 series advantage.

“I think the worst thing we can do is analyze this to death and start changing a bunch of things,” Knights coach Pete DeBoer said Sunday during a videoconference call. “If you can throw out double the amount of high-danger scoring chances as the other team on a given night, you’re going to win most games. And you’ve got to trust that will eventually come around and swing your way.”

Khudobin, 34, was serviceable through his first 14 games of the playoffs in place of starer Ben Bishop, compiling an 8-5 record with a 2.94 goals-against average and .909 save percentage.

But he’s turned into a Conn Smythe Trophy contender and Stars cult hero through four games against the Knights, posting a 3-1 mark with a 1.64 GAA, .952 save percentage and his lone shutout.

Vancouver’s Thatcher Demko nearly pulled off a similar smash-and-grab theft against the Knights when he stopped 123 of 125 shots in Games 5 through 7 of the conference semifinals.

The Knights have posted 40 or more shots five times this postseason and are 0-5 in those games. So, is it “hot goalies” or poor finishing?

Here are three areas the Knights need to improve to crack Khudobin:

One of the knocks on the 5-foot-11-inch Khudobin is his inability to deal with screens, and the Knights did a better job of creating traffic in front of the net in Game 4.

But too often in this series the Knights work the puck from low to high and the defenseman fires a shot from the point before the forwards arrive at the blue paint to get in Khudobin’s eyes.

The result is Khudobin has a clear look at the shot despite the appearance of there being bodies in front. When the Stars goalie gives up a rebound, the Knights haven’t been in position to pounce.

If the defensemen are able to wait a beat longer before shooting, and the forwards can get to the front of the net quicker, it will allow more chaos to develop.

2. Stop settling from outside

To use a basketball analogy, the Knights have been too content operating on the perimeter and chucking up 3-pointers.

They managed seven shots on goal from inside 15 feet in Game 4, and produced one in the final 29 minutes while the game was tied or the Knights trailed.

Of their 33 total shots on Khudobin, 21 came from outside of 30 feet and 11 were from beyond 50 feet or more. That includes a 66-foot slap shot from defenseman Alec Martinez in the first period and a 107-foot wrist shot from Jonathan Marchessault in the second.

Dallas finished with an 8-7 advantage in high-danger chances at five-on-five, according to NaturalStatTrick.com. For the series, the scoring chances are almost even despite the Knights having nearly 60 percent of the shot attempts.

“We created enough looks with the puck in the right people’s hands that I think most times we’re getting at least three goals in a game like that and maybe four or five,” DeBoer said. “We’ve just got to stick with it.”

One way for the Knights to test Khudobin is off the rush, which is difficult to do against a Dallas team that is content to sit back defensively.

It would mean sacrificing a couple of chess pieces to get the Stars to bring out their queen, but that’s what Colorado did to some degree of success in the conference semifinals.

The Avalanche didn’t get enough goaltending to fend off Dallas’ counterattack, but the Knights can expect Robin Lehner to come up with enough key saves in a wide-open game.

And that style of play might suit the Knights better than the tense, low-scoring nailbiters that seem to get in their top scorers’ heads.

“There’s always little things we can do a little bit better,” DeBoer said. “But we created enough chances (Sunday) night to get three or four goals. Some guys got to relax and stick a couple in the net.”