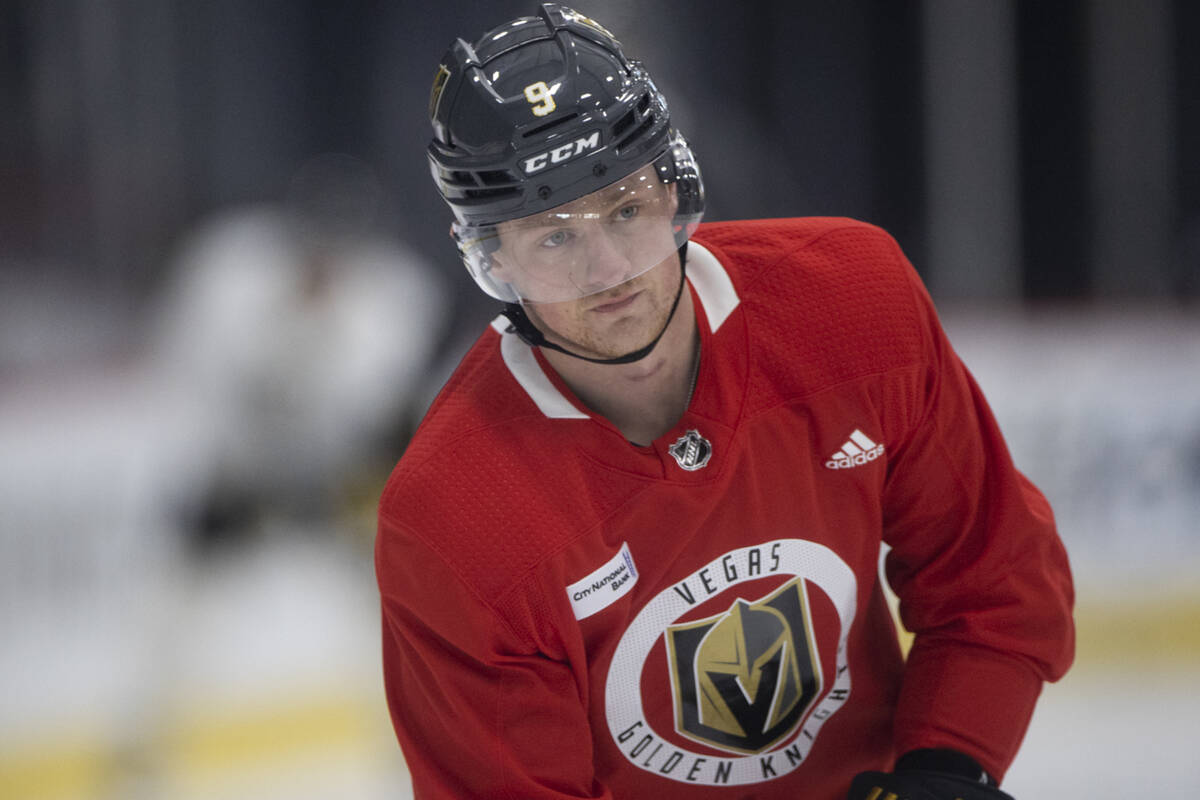 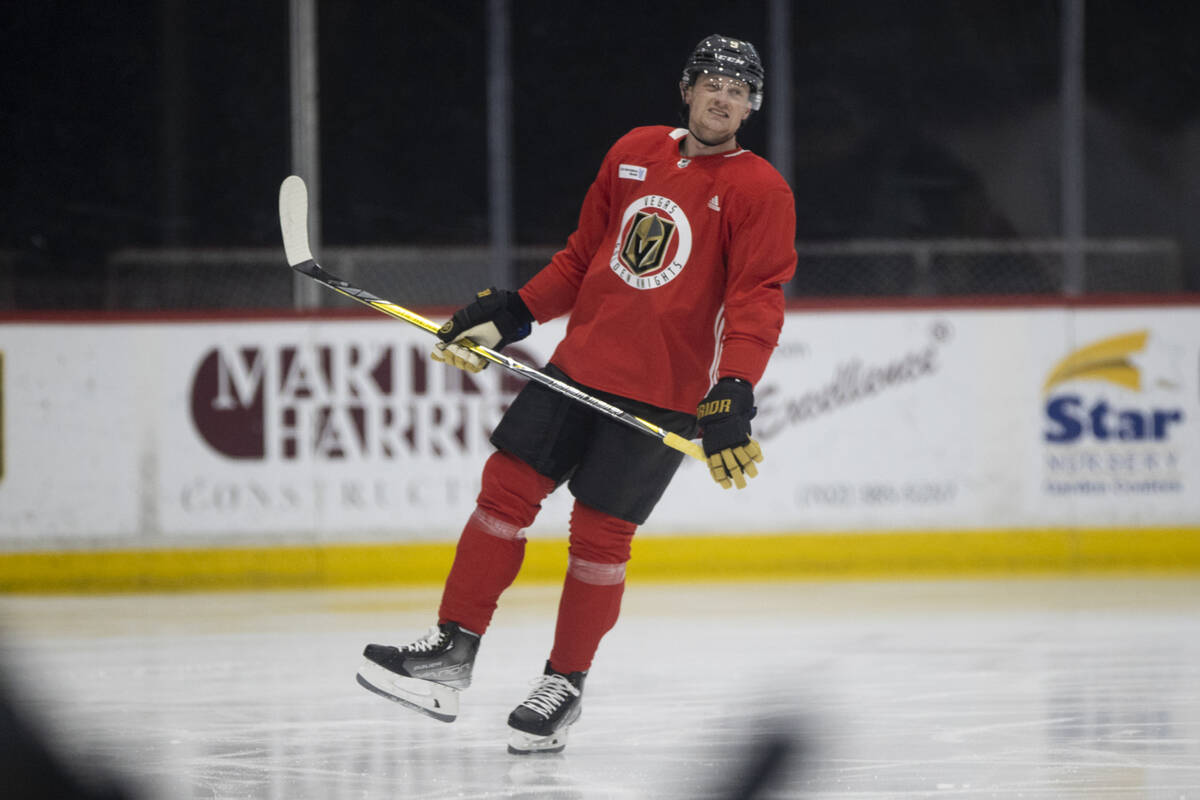 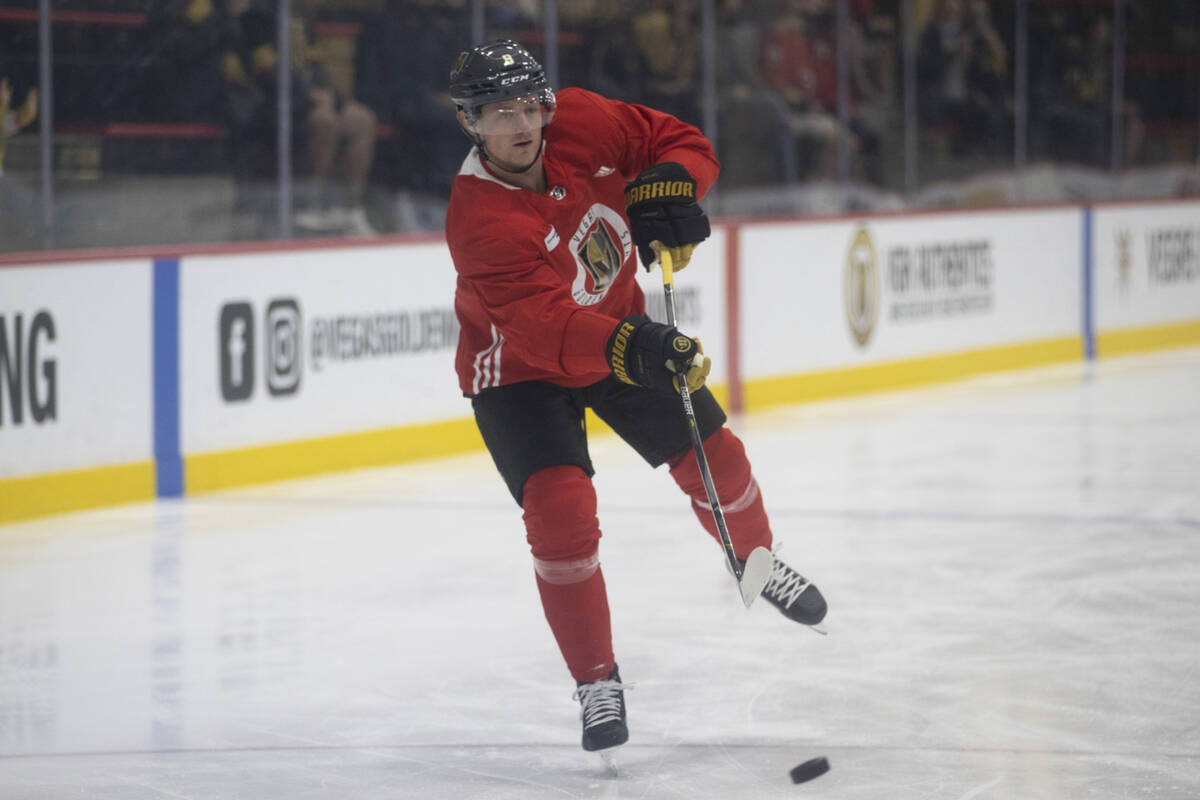 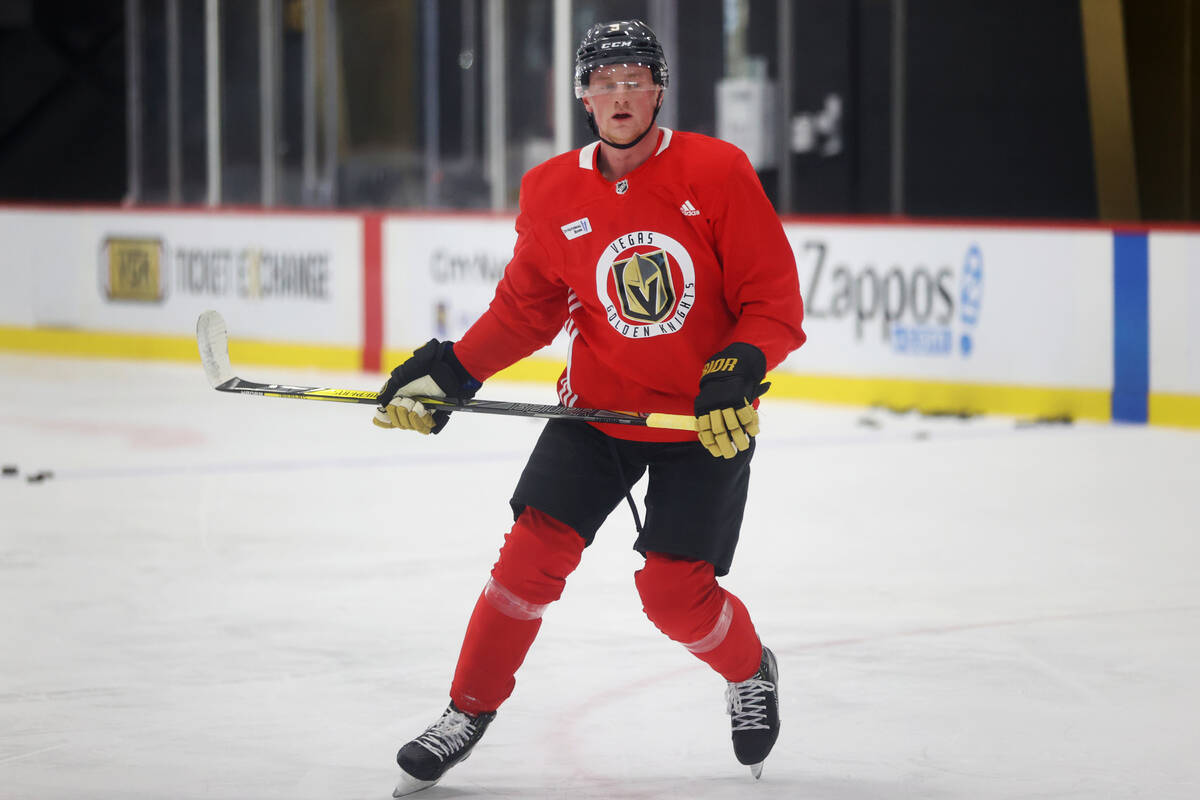 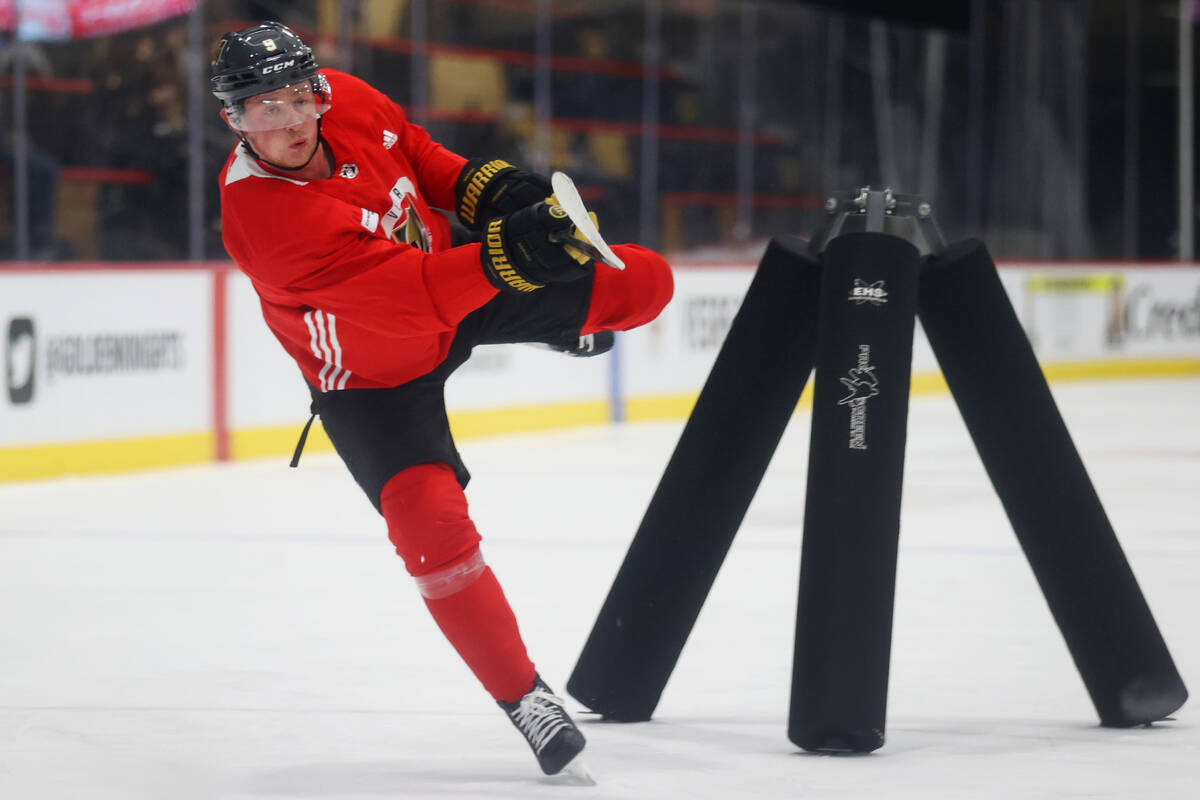 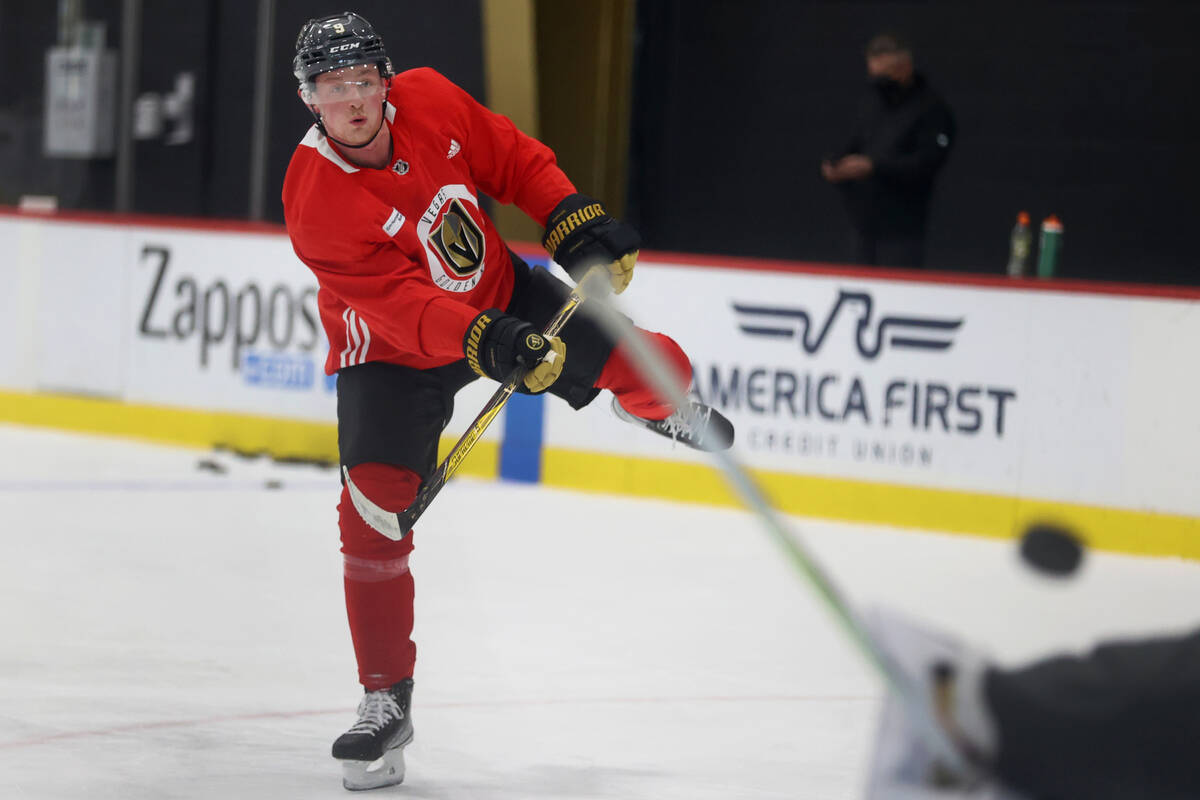 The announcement from the Golden Knights that captain Mark Stone would miss the game at Calgary with an upper-body injury was posted on social media at 5:25 p.m. Pacific time Wednesday.

The Knights deferred the bill on Jack Eichel’s $10 million salary cap hit after landing the injured center in a trade with Buffalo in November.

But with Eichel now cleared for contact three months after artificial disk replacement surgery on his neck and closer to returning from long-term injured reserve, it’s almost time for the Knights to pay up.

The Knights host Colorado on Wednesday, and in order to activate their prized acquisition, they must clear a significant amount of money before then.

Thanks to the help of two salary cap experts, it’s possible to understand what the Knights might do to fit Eichel into the lineup.

Vegas currently has 5,738,333 available in LTI Salary. They need at least $10M to activate jack Eichel off LTIR.

There are only a few ways to do that.

“Acquiring a player not knowing when he will be healthy and having to worry about that down the line, they’re kind of in a bind,” said Jamie Davis, owner and developer of CapFriendly.com. “To juggle enough cap to activate them, they’re likely looking at some (minor league) assignments and a trade, at least. I think that’s the likely path forward for them based on the scenarios I’ve run.”

Stone’s uncertain health throws a late curveball into the Knights’ salary cap plans, though it could offer a straightforward solution to their cap dilemma.

The status of defenseman Alec Martinez also complicates matters, since he appears close to a return from illness and multiple injuries.

As of Wednesday, the Knights would need to clear about $5.1 million in salary cap space to activate Eichel, according to CapFriendly.com and PuckPedia.com. That number goes up to approximately $10.36 million to also fit in Martinez.

With Miromanov 🔼for #VegasBorn, they have $4.9M cap space available in LTIR pool with 23 healthy + Brooks/Hague IR & Eichel/Martinez LTIR

There are a few ways for the Knights and capologist Andrew Lugerner to go about that process.

“Their main way out of this, especially if Eichel and Martinez are both going to be activated here and no one else is getting injured at the same time, they’re going to have to move at least one $5 million guy or so plus sending guys down,” said Hart (who requested his last name be omitted), the founder of PuckPedia.com. “And if they want to not risk losing guys and carry a full roster, then you’re talking maybe two $5 million guys.

“But there’s no way out of this unless they do something to clear like a $5 million spot.”

Winger Reilly Smith has been mentioned as a potential trade candidate, and a reunion with coach Gerard Gallant in New York is one rumor floating around. The Knights have been unable to agree to a contract extension with the pending unrestricted free agent who carries a $5 million cap hit.

Winger Evgenii Dadonov is signed through the 2022-23 season with a $5 million cap hit. Center William Karlsson ($5.9 million cap hit) also could be expendable with Eichel coming aboard. Both players have a 10-team, no-trade clause, according to CapFriendly.com.

“It’s going to be a trade, but it doesn’t necessarily have to be $5.1 (million),” Hart explained. “They can send some guys down, too.”

Should the Knights choose to clear additional money by sending players down, they could face some difficult decisions. For example, reassigning defenseman Daniil Miromanov and forwards Michael Amadio and Brett Howden would cut almost $2.5 million.

“Do they want to risk losing those guys for nothing on waivers? I don’t know,” Hart said.

If they want to get creative, one possibility is to trade a healthy player for a contract on long-term injured reserve. Tampa Bay did that during the offseason when it sent Tyler Johnson ($5 million) and a second-round pick to Chicago for the contract of retired defenseman Brent Seabrook.

That would give the Knights additional space in their long-term injured reserve pool to maneuver around the $81.5 million salary cap.

”They don’t have a lot of leverage,” Davis said. “If the ask is, for example, Dadonov plus maybe a second or a first or whatever the ask is, where you’re saying, ‘I will take your injured player, you’re getting a healthy player, now you don’t have to pay for the injured player while he’s not playing,’ maybe that leverage increases a little bit where that second now is a third, or that first becomes a second. That’s certainly a situation that could work.”

Of course, this all becomes moot if Stone’s injury is severe enough to push him to long-term injured reserve.

Daily Faceoff suggested Thursday that’s a possibility, and coach Pete DeBoer confirmed Stone has been dealing with the issue for the entire season. If Stone moves to LTIR, his $9.5 million cap hit would be more than enough to activate Eichel and Martinez.

“We’ve seen in situations with teams in the past where it appeared that was going to be the case,” Davis said. “And then the moment before something needed to come down the line like a trade, for example, somebody gets long-term injured, and that solves their concerns. Not what you hope for from the team perspective. You don’t want a star player getting injured, but it resolves the cap issue for the short term.”