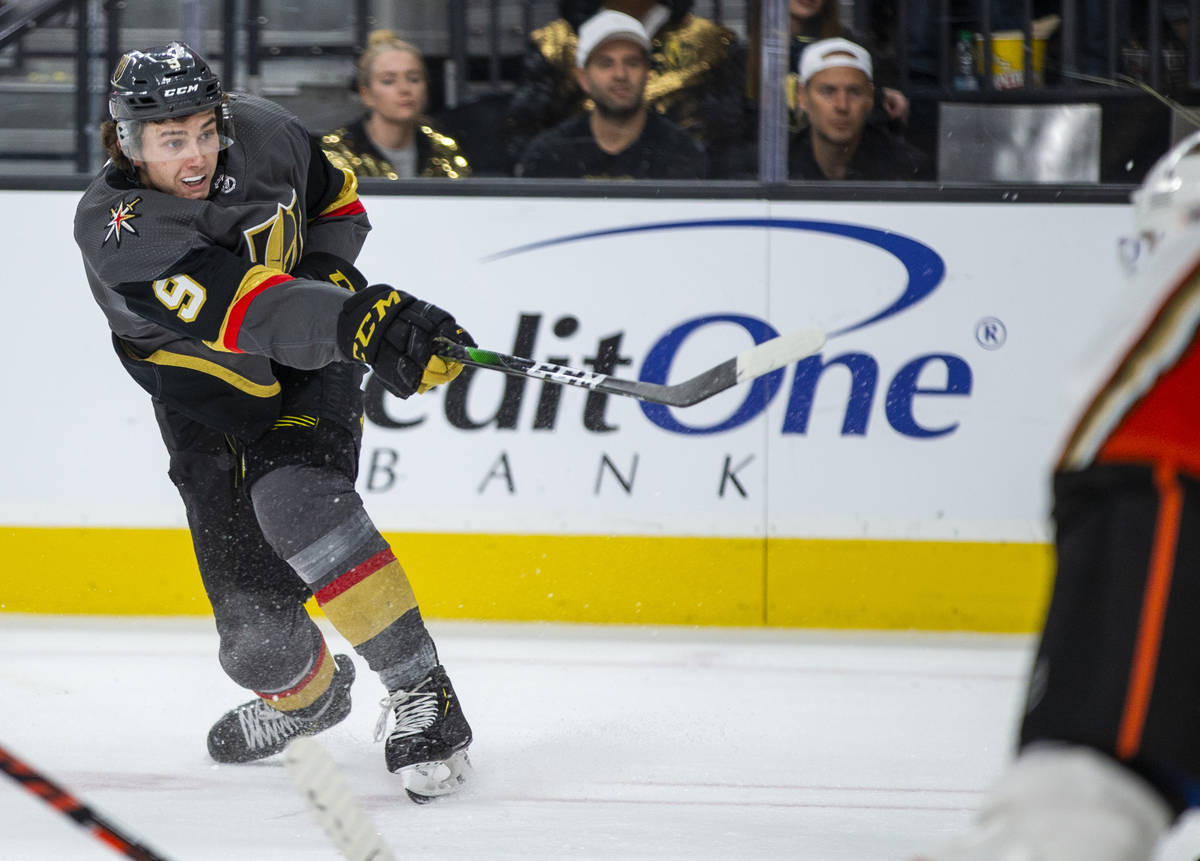 The Golden Knights’ farm system has started to trickle into the NHL.

The team’s first-ever draft pick, Cody Glass, has debuted. Chicago Wolves products Nic Hague, Jake Bischoff, Keegan Kolesar, Zach Whitecloud and Gage Quinney also have. None was immediate game-changers upon their arrival — they had a combined 25 points in 101 games — but they provided important and cheap depth for a team near the salary-cap ceiling.

The Knights’ reliance on that young, inexpensive labor should only increase once they have a hometown American Hockey League affiliate. So, with hockey shut down because of the coronavirus pandemic, now feels like a good time to check on the farm.

Glass had a dream debut. He scored his first goal against the Knights’ biggest rival — the San Jose Sharks — with his father and brother in attendance.

The rest of his season was inconsistent. He was a power-play asset but wasn’t as noticeable at 5-on-5, especially because he spent time out of position at right wing.

Glass’ season ended with a knee injury in February. He’s expected to be ready for training camp.

Hague scored his first goal Jan. 21 in his 39th game. His time in the NHL then ended.

The defenseman stayed in the AHL after the All-Star break after new coach Pete DeBoer decided to give fellow rookie Zach Whitecloud a shot.

Hague showed progress as he adjusted to the NHL’s speed and physicality. He didn’t look ready for heavy minutes, but defensemen often take time to blossom.

The center started his season rehabbing in Las Vegas after partially tearing his Achilles tendon training in June. He didn’t play until Nov. 17, but shook off the rust in no time. Krebs can skate, set up teammates and defend at a high level. He has the potential to be an all-situations player in the NHL.

The wing joined the Wolves this season after beginning his professional career in Sweden. All he did was lead Chicago in points, rank fourth among AHL rookies in scoring and make the All-Star team.

.@Elvenes25 has had one heckuva season. Check out our young rook's top moments ⬇️ #Elvis#WeAreTheWolves pic.twitter.com/7JCEBva7uG

Elvenes is a playmaker with a lot of skill. His debut could come soon if he works on his play away from the puck.

Stats: One assist in 16 games

Hague’s loss was Whitecloud’s gain. The blue liner received an opportunity instead of his former Wolves defense partner after the Knights returned from the All-Star break. He took full advantage, earning his spot with consistent, heady play that was impressive for a rookie.

Whitecloud’s game isn’t flashy, but he’s dependable in his own zone and on the penalty kill. He’s received an extension through the 2021-22 season.

Coghlan’s sophomore AHL campaign wasn’t quite as impressive as his first, when he ranked third among rookie defensemen with 40 points. There’s still plenty to like.

The offensive defenseman turned heads in rookie and training camp with his sharp shot and toughness. His play in his own zone could still improve, but he’s close to contributing.

Dorofeyev adjusted to the KHL slowly after torching the Russian junior league last season. The wing impressed the Knights with his athleticism at the combine. Now he needs to learn how to use it against grown men.

Dorofeyev is under contact in the KHL through the 2021-22 season.

Dugan’s stock shot through the roof this season.

The leading scorer in Division I men’s college hockey had an outstanding sophomore campaign for Providence and was named one of 10 Hobey Baker Award finalists. Dugan even gave local fans a taste of what’s to come when he scored the winning goal in a shootout to lead the Friars to the Fortress Invitational title in January at T-Mobile Arena.

The wing hasn’t decided whether he will turn professional this year. If he does, he could contribute quickly because he has enough skill and grit to play up and down the lineup.

Schuldt spent his first full professional season in the AHL after making his NHL debut April 6 against the Los Angeles Kings.

The defenseman showed flashes of why he was a coveted player coming out of St. Cloud State. He skates fairly well and can contribute on the power play.

Korczak was regarded as a steady defender when the Knights drafted him, but he might be more than that. His offense is up (0.49 points per game to 0.82) and his penalty minutes down (64 to 27) compared with last season.