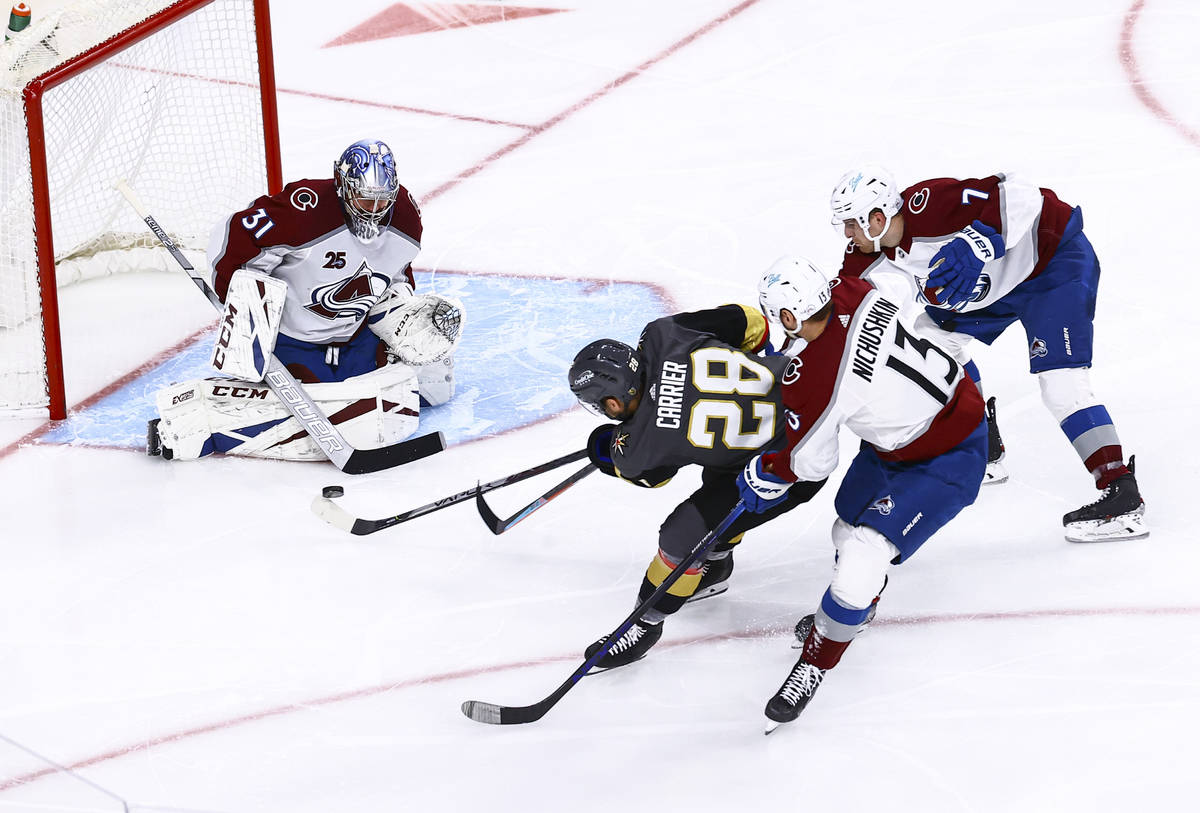 Colorado Avalanche goaltender Philipp Grubauer (31) makes a save against Golden Knights' William Carrier (28) during the third period of an NHL hockey game at T-Mobile Arena in Las Vegas on Monday, May 10, 2021. (Chase Stevens/Las Vegas Review-Journal) @csstevensphoto 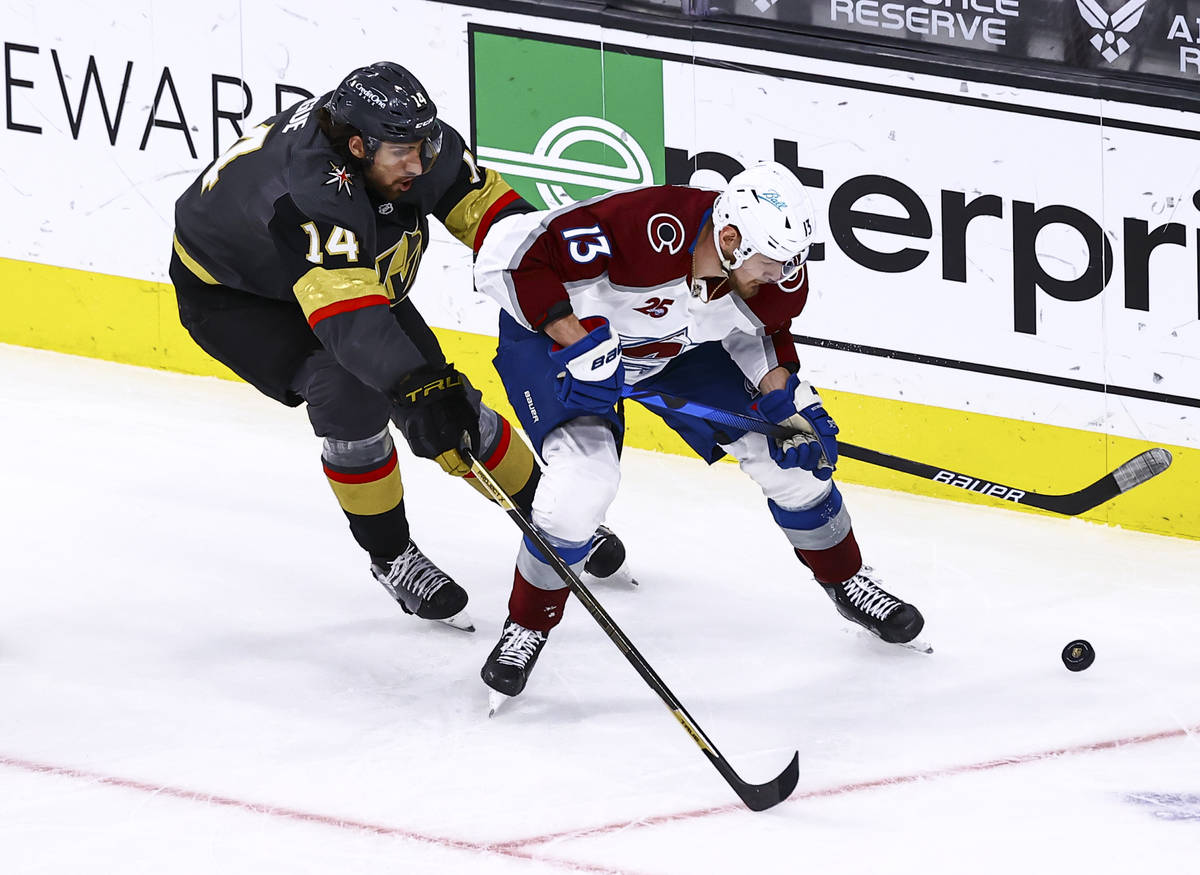 Colorado Avalanche's Valeri Nichushkin (13) skates with the puck under pressure from Golden Knights' Nicolas Hague (14) during the third period of an NHL hockey game at T-Mobile Arena in Las Vegas on Monday, May 10, 2021. (Chase Stevens/Las Vegas Review-Journal) @csstevensphoto 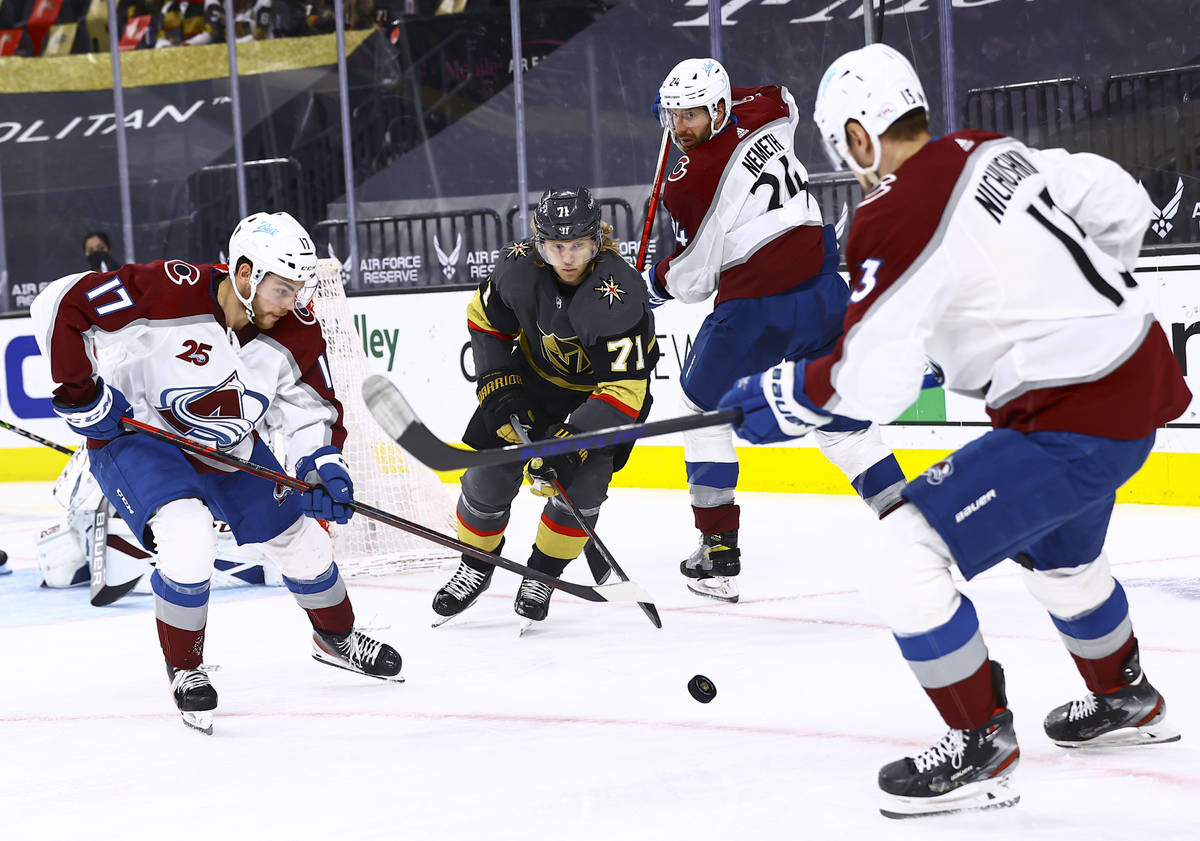 Golden Knights' William Karlsson (71) chases after the puck between Colorado Avalanche's Tyson Jost (17) and Valeri Nichushkin (13) during the second period of an NHL hockey game at T-Mobile Arena in Las Vegas on Monday, May 10, 2021. (Chase Stevens/Las Vegas Review-Journal) @csstevensphoto 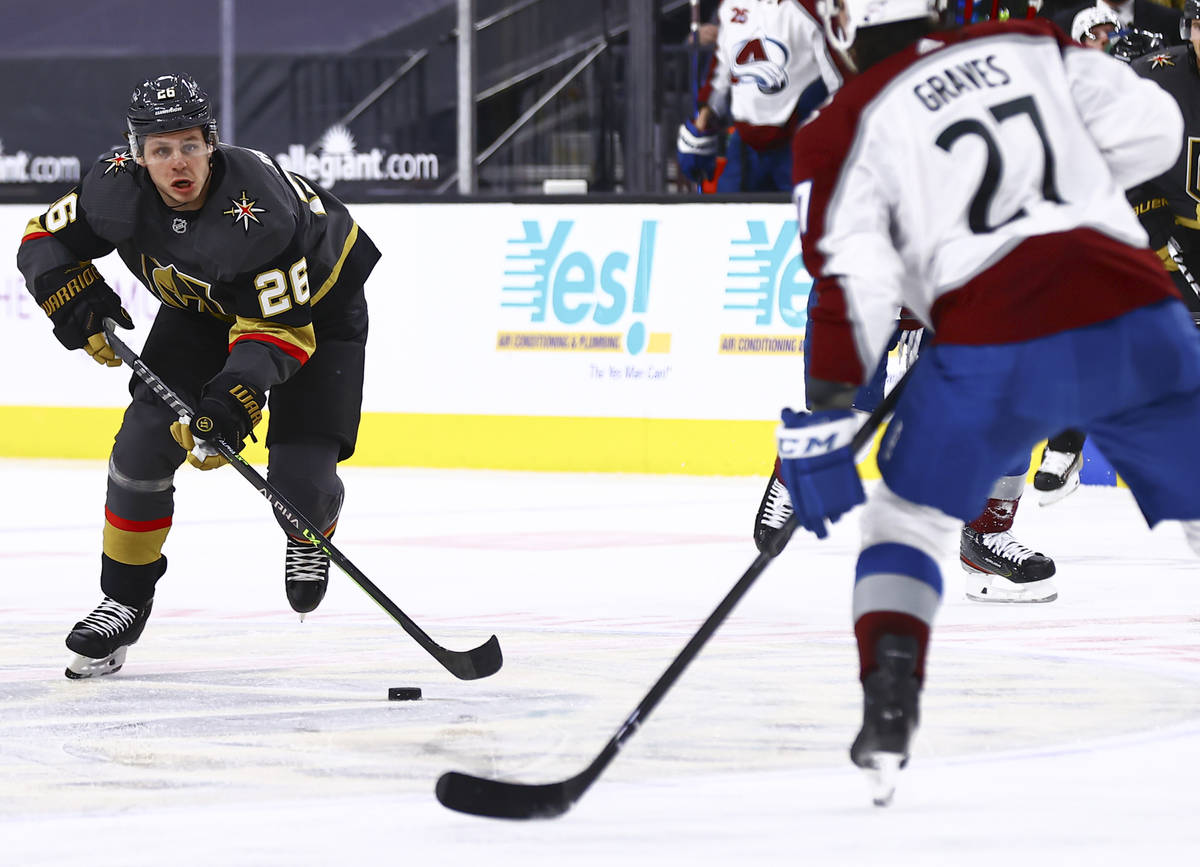 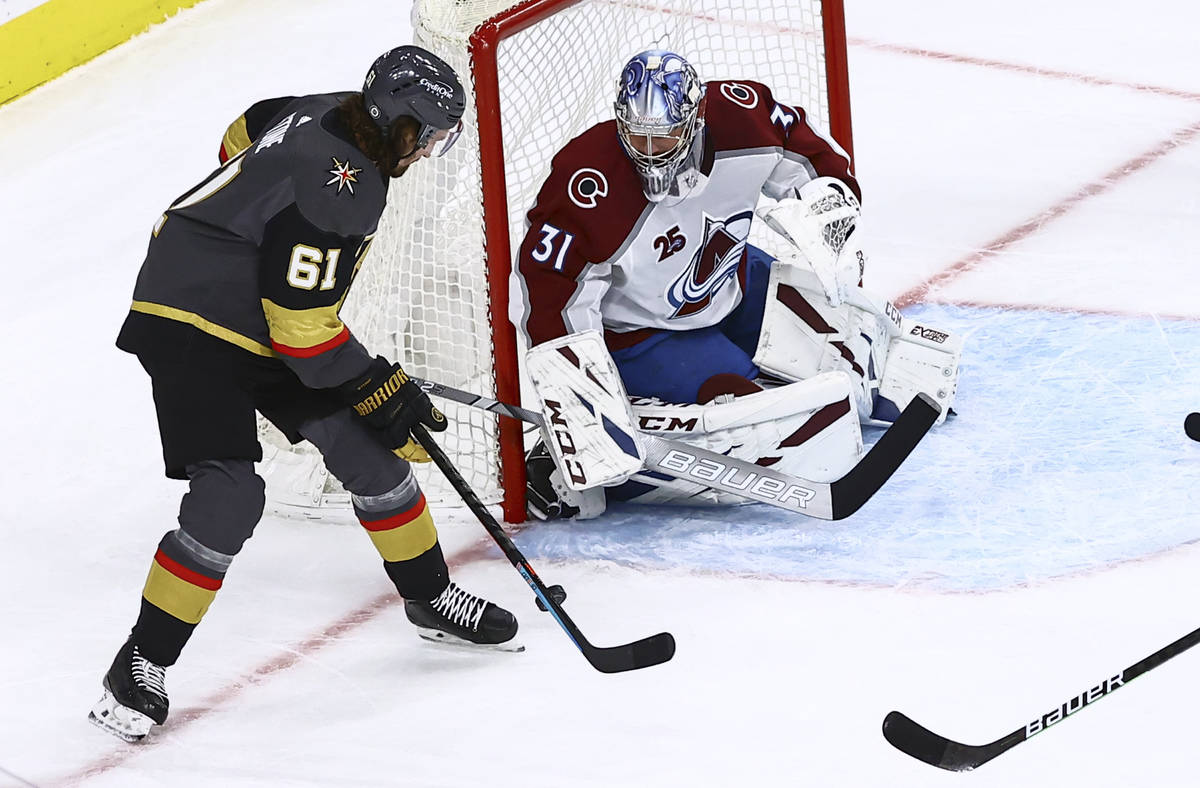 It became evident early how the Golden Knights were going to have to play Monday’s game against the Colorado Avalanche with only 15 skaters.

Defenseman Shea Theodore took his second shift 1:26 into the game with defenseman Nic Hague. When Hague went off to change, Theodore stayed on the ice and switched sides to accommodate his new partner, Alex Pietrangelo. Theodore’s shift ultimately lasted 1:20.

That was the kind of creativity the Knights had to deploy with only 10 forwards and five defensemen on the bench. Everyone had to stretch their ice time a bit, and it nearly worked in a 2-1 loss at T-Mobile Arena.

“Not much strategy,” coach Pete DeBoer said. “We tried to keep the shifts short and keep our energy up, and we had it right up to the third period with the short bench. The guys did everything we asked them to do at the start of the game. I just wish they would have been rewarded for it.”

The Knights have had to play short-handed a few times this season because of salary cap constraints, but Monday took things to another level. Rookie forward Peyton Krebs fractured his jaw in Saturday’s win over the St. Louis Blues and is out indefinitely.

The injury to Krebs, who was an emergency recall, put the Knights in a bind. They couldn’t immediately call up a replacement who could fit under the salary cap. The team had to wait until Wednesday’s game at the San Jose Sharks to be able to dress 17 skaters because it will be allowed to make emergency recalls to fill in for Krebs and defenseman Alec Martinez, who also sat out Monday with an injury, if necessary.

“We built our roster to give our team the best chance to compete for a Stanley Cup,” general manager Kelly McCrimmon said. “These things can happen when you make the decisions the way that we made them.”

The circumstances being what they were, the Knights didn’t put the burden of extra ice time on just a few players Monday. They spread the load throughout the lineup.

Theodore led the way by playing 28:59, his second-highest total of the season. Pietrangelo played 26 seconds fewer than Theodore. And despite being short-handed, the Knights outshot the Avalanche 37-21.

“You got to be proud of that effort,” Pietrangelo said. “That’s an impressive effort to limit that team with as much offense as they have.”

Despite their commitment, the Knights’ chances waned as the game went on. They had one shot on goal in the final 10 minutes. It came with 1:06 remaining with six skaters on the ice. Colorado pulled away in that time with seven shots on goal, including the game-winning goal from forward J.T. Compher.

Knights captain Mark Stone said he wasn’t sure fatigue was a factor.

“Adrenaline kind of took over for us,” he said. “It’s just everybody plays a couple extra minutes. That’s just the way it is. That’s why I guess guys like us get paid.”

One thing the Knights have done tremendously against the Avalanche is kill penalties.

Colorado finished the season series 1-for-21 on the power play. The Knights’ top-ranked penalty kill (86.7 percent) flustered the Avalanche with aggression and created numerous turnovers.

Colorado had one shot on goal on its two power plays.

He had six shots on goal, his second-highest total of the season. He scored his second goal in the past four games to give the Knights a 1-0 lead in the first period.

Pietrangelo had 14 points in his first 31 games. He has eight in his past nine.

The Knights did a good job defending Colorado’s top line.