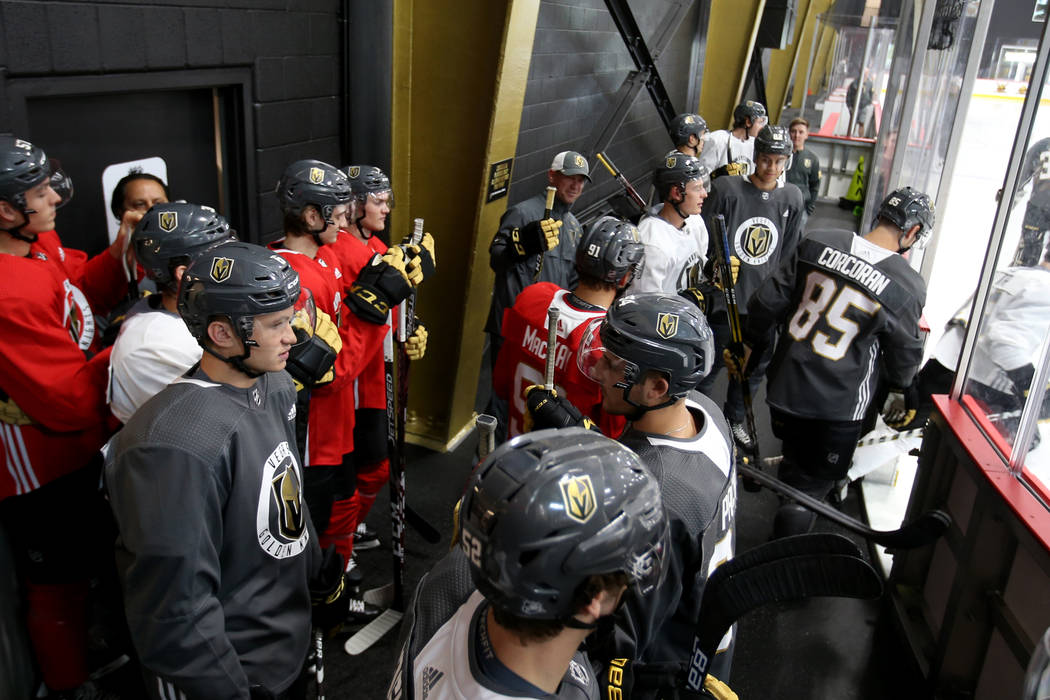 IRVINE, Calif. — Jermaine Loewen has spent a lifetime overcoming the odds. His journey from an orphanage in Jamaica to growing up in Canada is unlike any player in rookie camp.

He is savoring the opportunity to surmount his latest obstacle. “I definitely relish being in this position,” Loewen said.

The 21-year-old is trying to latch on with the Golden Knights organization in hopes of continuing his hockey career.

Loewen had two scoring chances turned away in the first period of Sunday’s 3-2 loss to Arizona during the Anaheim Rookie Faceoff at Great Park Ice &FivePoint Arena.

“I think about it as trying to prove to myself I can keep going,” Loewen said. “The people that are there in my life and the people in this organization that are going to help me develop, I just listen to them and do everything to the best of my abilities. At the end of my life, I know I gave everything I have. That’s important for me.”

Loewen was born in Mandeville, Jamaica, and was sent to a children’s home after his birth parents left him at a hospital at age 1. Four years later, he was adopted by Stan and Tara Loewen of Arborg, Manitoba, who noticed him while on a church mission in Jamaica.

Loewen received his first pair of skates for Christmas at age 6 and was one of the oldest kids in the local learn-to-skate program. He didn’t play his first organized hockey game until he was 10.

In his first season of major-junior with Kamloops of the Western Hockey League in 2014-15, Loewen played 37 games without registering a point. But he gradually improved the next two seasons and led the Blazers in goals (36) and points (64) in 2017-18.

Dallas selected Loewen in the seventh round (No. 199 overall) of the 2018 draft, making him the first Jamaican-born player to be taken in the NHL draft.

“Even as a 16-year-old in Kamloops — he’ll let me say it — he was uncoordinated. He couldn’t shoot,” said Knights goaltending prospect Dylan Ferguson, a teammate of Loewen for four seasons in major-juniors. “And then two years later he scores (36) goals. He’s a hard worker. That’s just the type of guy he is.”

Loewen admittedly had a subpar final season with Kamloops (28-18-46 in 59 games) and wasn’t signed by Dallas, making him a free agent. He was unable to participate in the Knights’ development camp in June due to injury but was invited to rookie camp.

“It was a tough decision I didn’t get signed by (Dallas). I had a dig deep inside myself and say, ‘You know what? As long as I keep going and keep playing and do my thing, then things are going to go my way,’ ” Loewen said. “Vegas saw some potential in my abilities and my playing. For me it’s just about developing every day and taking everything I can to grow as a player and a person.”

The 6-foot-4-inch, 227-pound forward is hoping to become the second NHL player from Jamaica, joining Graeme Townshend, who played 45 games over five seasons after not being drafted.

If Loewen does not earn a contract with the Knights, he would be eligible to sign with their American Hockey League or ECHL affiliates.

“He said he felt sluggish in Game 1, and I thought (Sunday) at times you could see him a little bit more up ice,” said Chicago Wolves coach Rocky Thompson, who is leading the Knights’ rookie team. “That’s the way his game is going to have to be. North and south, defend hard when you get the puck, chip and support and then be heavy on the puck.”