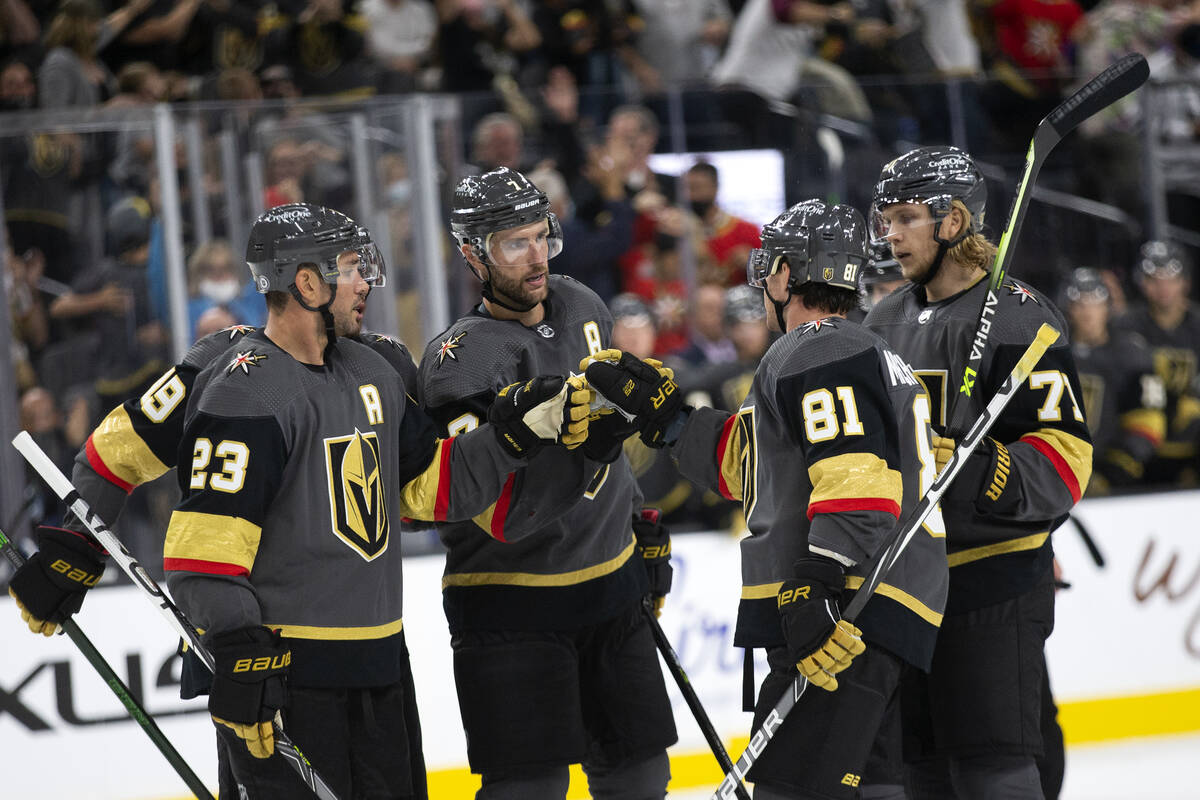 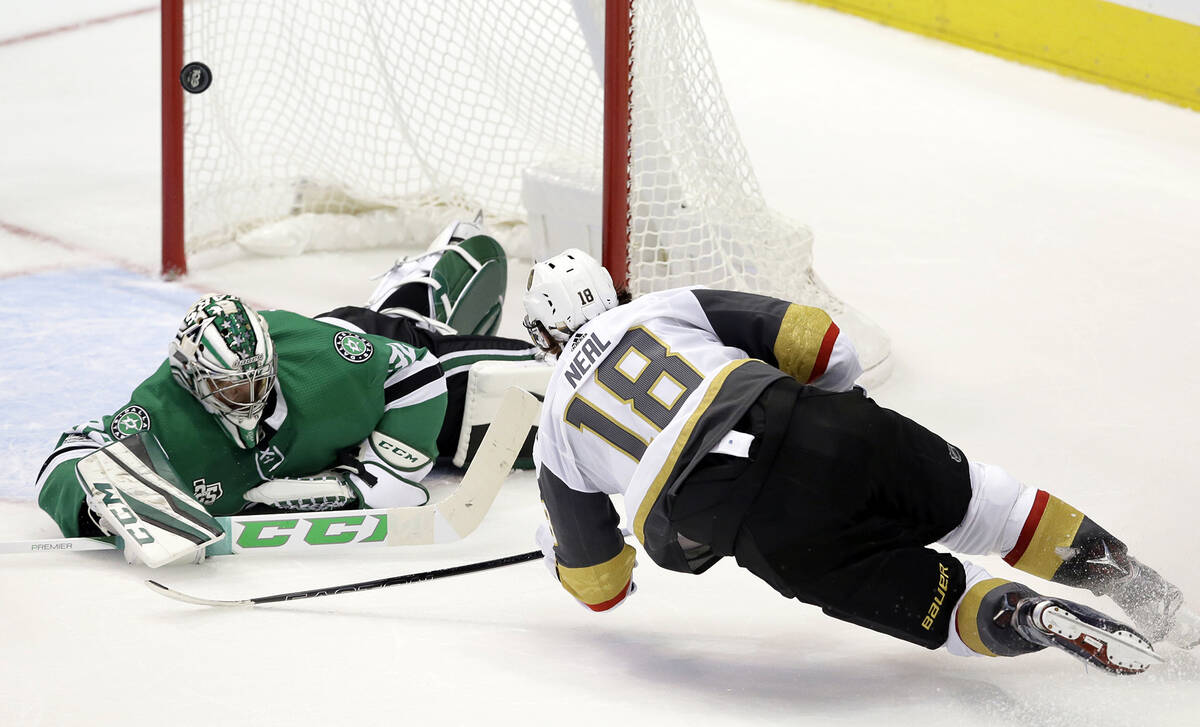 In this Friday, Oct. 6, 2017, file photo, Vegas Golden Knights left wing James Neal (18) scores a goal against Dallas Stars goalie Kari Lehtonen (32) during the third period of an NHL hockey game in Dallas. Neal has scored the game-winning goal in all three of the Knights' victories, making them the first team in NHL history to begin their debut season with three straight wins. (AP Photo/LM Otero, File) 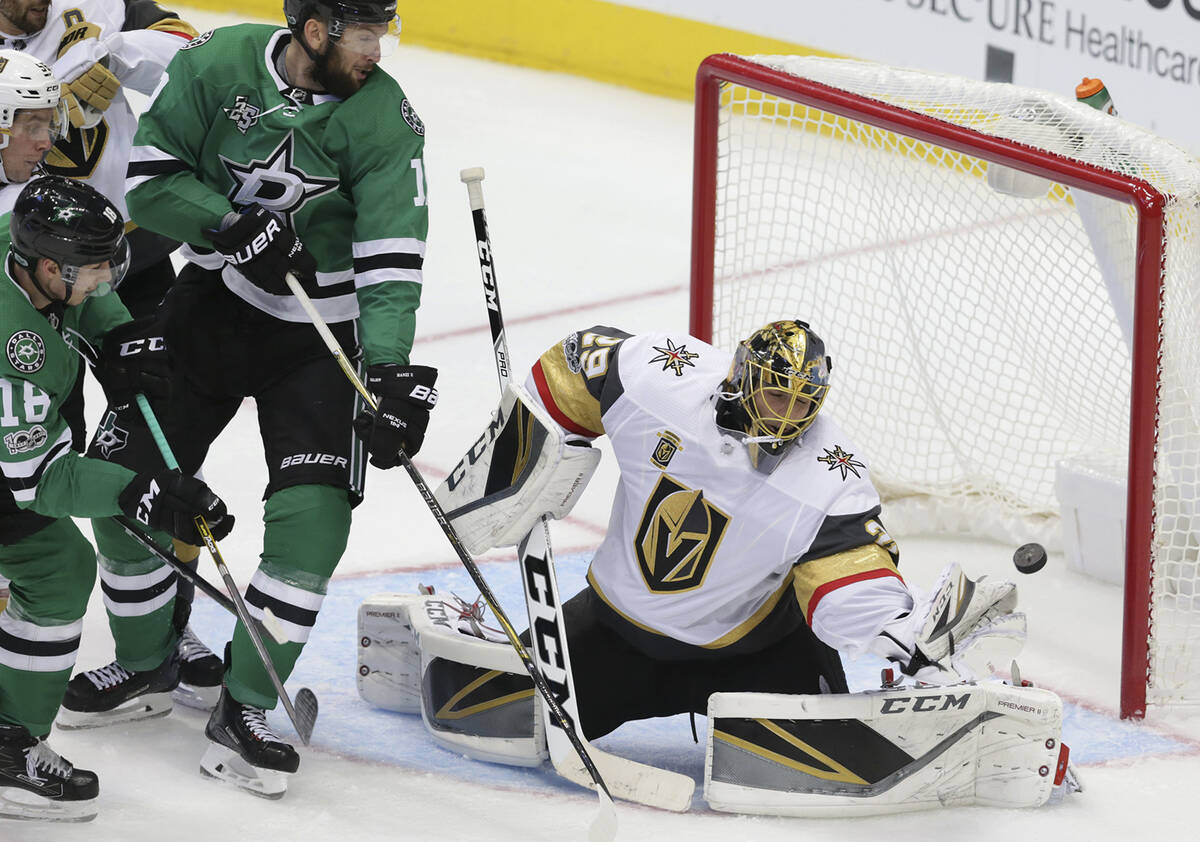 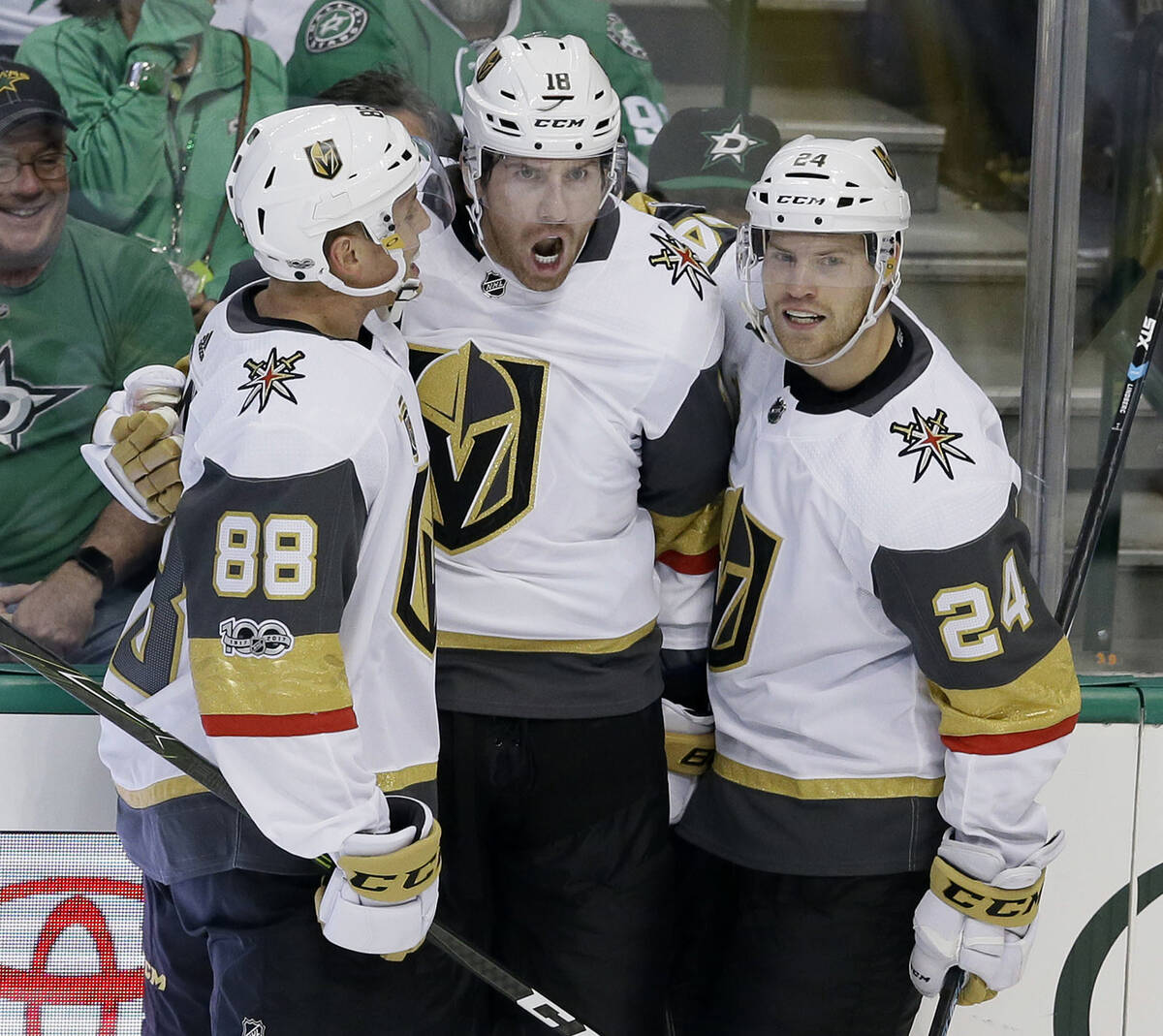 In this Friday, Oct. 6, 2017, file photo, Vegas Golden Knights left wing James Neal, center, celebrates scoring a goal with teammates Nate Schmidt (88) and Oscar Lindberg (24) during the third period of an NHL hockey game against the Dallas Stars in Dallas. The Golden Knights have a legitimate chance to surpass the 1993-94 Florida Panthers’ mark record for most wins (33) and points (83) by an expansion franchise. It should be pointed out that Florida’s mark came in an 84-game season while Vegas will play 82. (AP Photo/LM Otero, File) 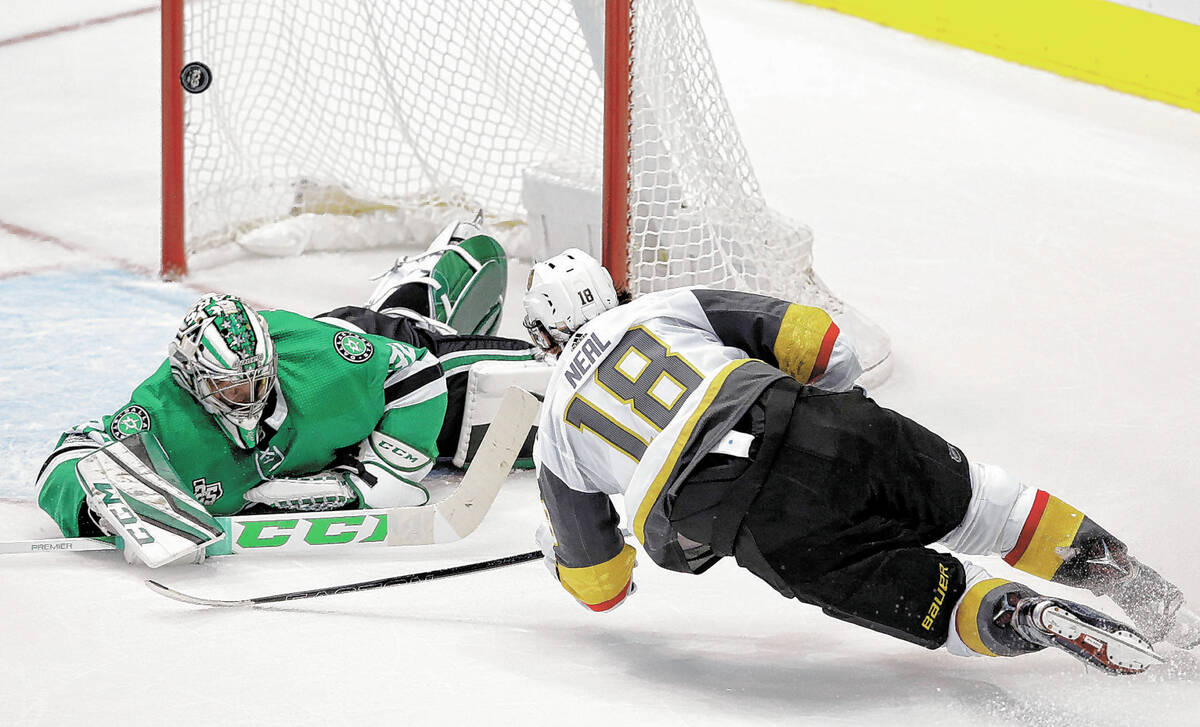 FILE - In this Friday, Oct. 6, 2017, file photo, Vegas Golden Knights left wing James Neal (18) scores a goal against Dallas Stars goalie Kari Lehtonen (32) during the third period of an NHL hockey game in Dallas. Neal has scored the game-winning goal in all three of the Knights' victories, making them the first team in NHL history to begin their debut season with three straight wins. (AP Photo/LM Otero, File) 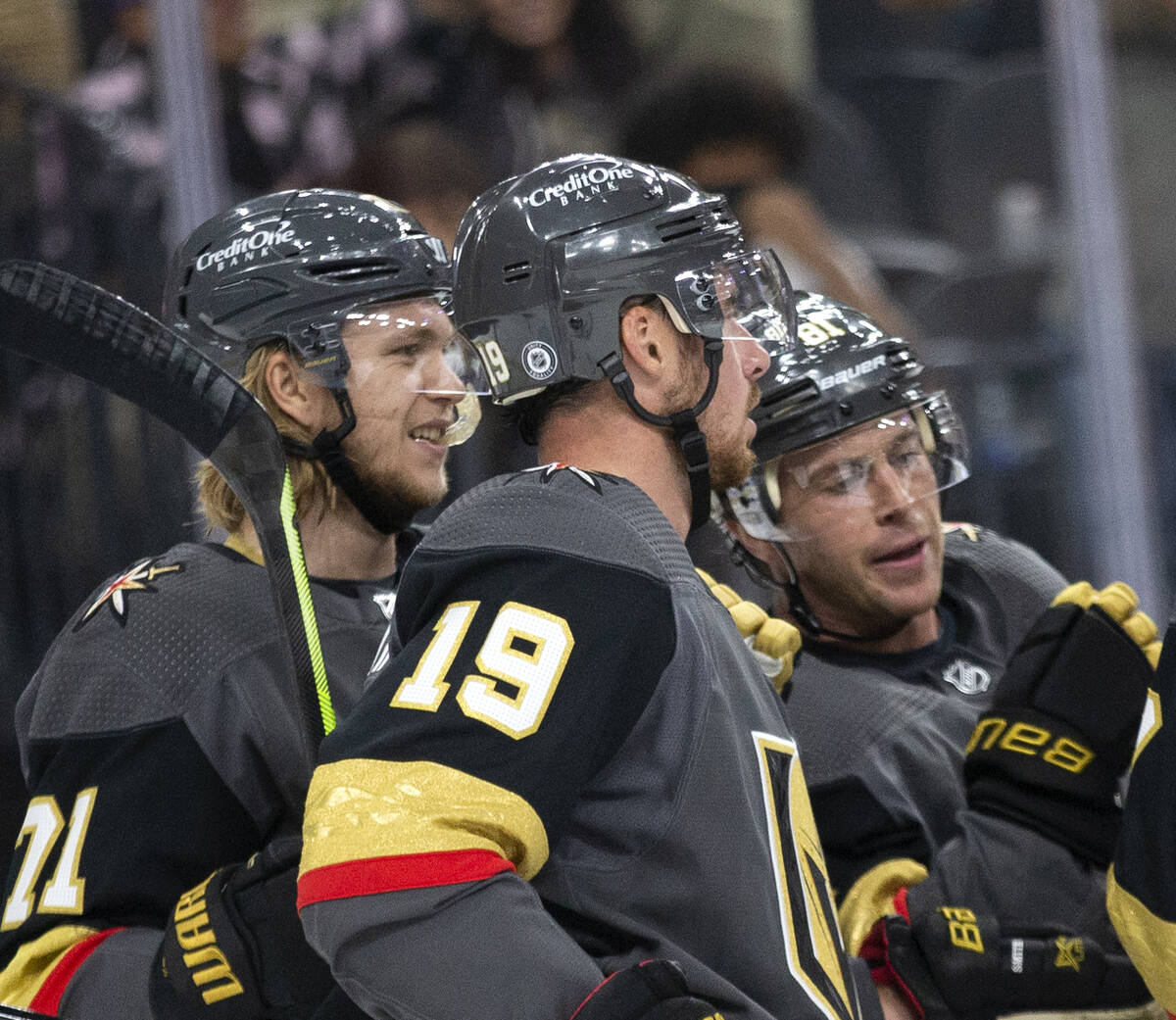 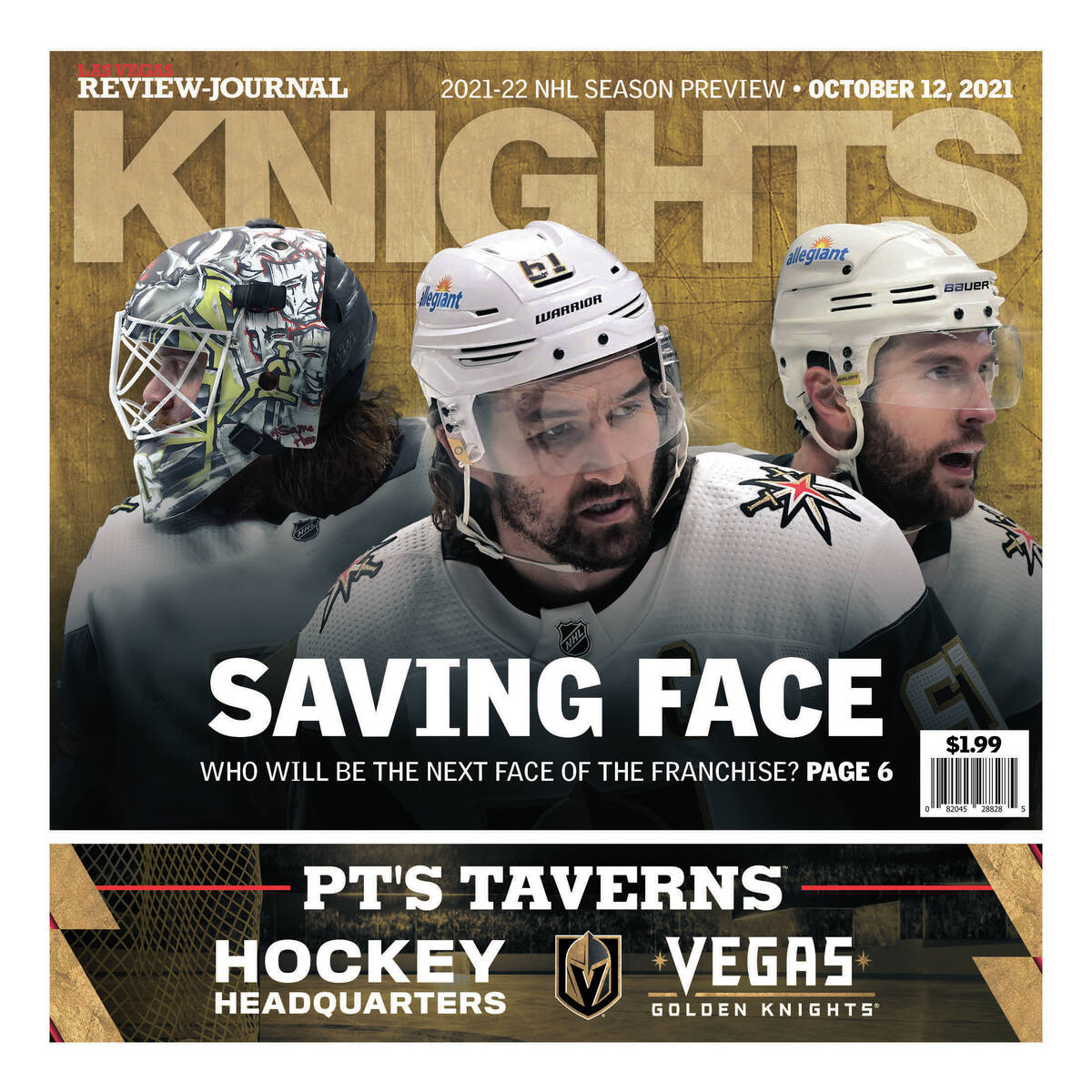 If any team can relate to how the Kraken feel entering Tuesday’s season opener, it’s the Golden Knights.

Four years ago, they were the newbies, uncertain of what the future held. Now it’s expansion Seattle in that position, hoping to take the league by storm in a similar fashion.

The NHL’s newest teams square off at T-Mobile Arena in the return of hockey to ESPN.

“It’s pretty cool to be in this game playing against them for the first time. I’m excited. We’re going to be ready for them.”

The Knights debuted Oct. 6, 2017, at Dallas with a lineup that included luminaries such as Jason Garrison, Brendan Leipsic and Oscar Lindberg.

Goalie Marc-Andre Fleury finished with 45 saves in the 2-1 victory over the Stars. James Neal scored twice in the third period, including the winner with 2:44 remaining while sliding on his knees.

“I remember after we beat Dallas I was just excited we didn’t go 0-82 that year,” winger Reilly Smith said. “There wasn’t high expectations for us, but we kept on building. After every win we just believed a little bit more. I’m sure that will be a similar blueprint for what Seattle is going to want to do.”

The Knights ran away with the Pacific Division title, winning 51 games and smashing nearly every record for expansion success. They became the third team in NHL history to reach the Stanley Cup Final in their inaugural season, joining the 1918 Toronto Arenas and 1968 St. Louis Blues.

That’s a high bar for the Kraken to match in their first season under coach Dave Hakstol.

Seattle stayed away from most of the high-priced talent made available in the expansion draft and also did less wheeling and dealing than the Knights, who stockpiled players and draft picks through numerous side deals.

The Kraken built a solid defense in front of free-agent goaltender Philipp Grubauer, a finalist for the Vezina Trophy last season with Colorado. Jaden Schwartz and Yanni Gourde are expected to shoulder much of the scoring load.

“What they’re doing at the start of the season, if you watch exhibition games, they’re playing very well. They look very, very solid,” ESPN analyst Barry Melrose said. “That’s going to be a team that we’re going to watch out because everyone will say they’ll be as good as Vegas. They’re not going to be as good as Vegas, but that doesn’t mean they can’t be pushing for a playoff spot.”

Both McNabb and Smith used the word “scrambly” to describe the Knights’ first game, as they adjusted to the systems implemented by then-coach Gerard Gallant. But the effort was there, and they expect similar energy in the Kraken’s debut.

“I remember just trying to look at opponent lineups. I was like ‘Oh, let’s try not to lose 6-0 today,’ ” Jonathan Marchessault said. “They’re going to come hungry. We definitely have to be ready for it because we’ve been through it.”