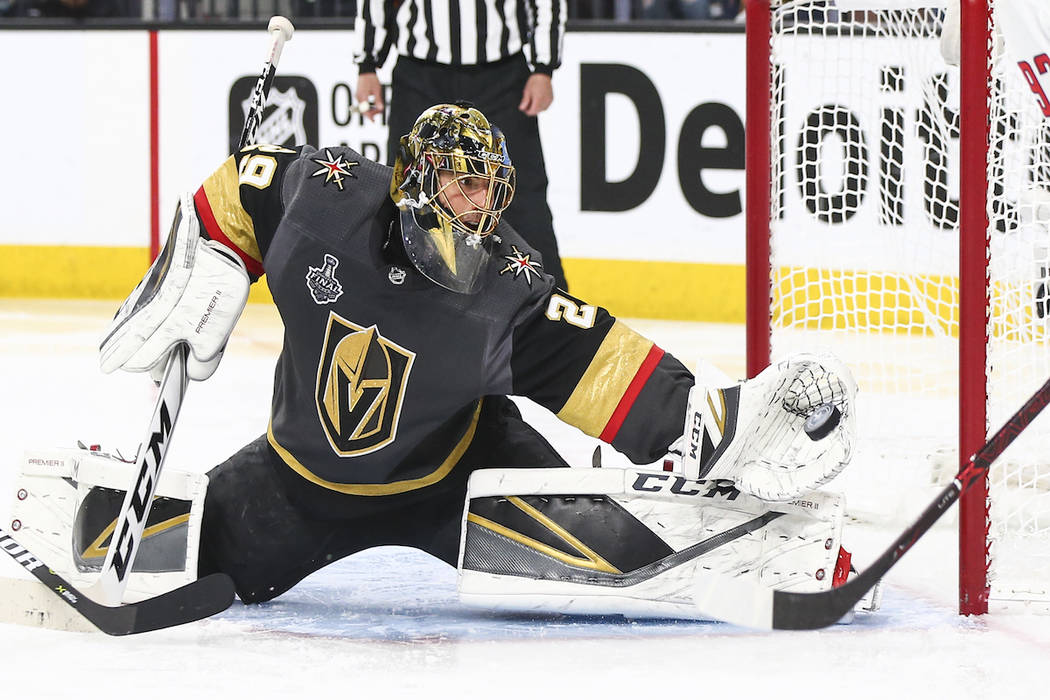 Fleury participated in the morning skate at Nassau Veterans Memorial Coliseum ahead of the game against the New York Islanders and served as the backup to Malcolm Subban.

Fleury was not made available to the media.

“It’s great to see him back with our group,” coach Gerard Gallant said. “He’s the heartbeat of our crew. He has fun out there and he’s enjoying it.”

Fleury took a personal leave Nov. 26, and his father, Andre, passed away the following day at age 63 in Sorel-Tracy, Quebec, according to an online obituary.

While Fleury was away, the Knights won a season-high four straight games with Subban in net.

“We’ll be there as support for him, and we’re here for whatever he needs. I hope that he knows that,” defenseman Jon Merrill said. “We’re a tight-knit group, so hopefully he can lean on us if there are any tough times for him.”

Added defenseman Deryk Engelland: “He’s a huge leader, and getting his personality back is always a great thing for us.”

Fleury joked with players and coaches throughout the morning skate and was welcomed back by the familiar merciless taunts from left wing Jonathan Marchessault after each goal he allowed.

He's back!
Marc-Andre Fleury returned to the Golden Knights following his personal leave from the team. #VegasBorn pic.twitter.com/pP3SezHoa2

The Knights are off until Sunday when they host the New York Rangers at T-Mobile Arena. That game could feature Fleury against the Rangers’ Henrik Lundqvist in a battle between two of the seven winningest goaltenders of all time.

“We want to give him some time and make sure he’s ready to go,” Gallant said. “You don’t win in the NHL unless you have two goaltenders, and right now, obviously Subban’s played great hockey for us. … Marc will get time some time to get ready.”

The Knights made their first visit to Long Island after playing the Islanders at Barclays Center in Brooklyn, New York, the past two seasons.

The trip brought back memories for Gallant, who made his NHL debut for the Red Wings on Jan. 22, 1985, at Nassau Coliseum and scored against Hall of Fame goalie Billy Smith to help Detroit win, 5-4.

Gallant also was an assistant coach for the team from 2007 to 2009, and the Islanders reportedly received permission to interview him for their head coaching vacancy in 2017 before he was ultimately hired by the Knights.

“It’s real different,” Gallant said of the arena that was renovated and reopened for hockey last season. “The building looks good. The ice was great today. It’s exciting.”