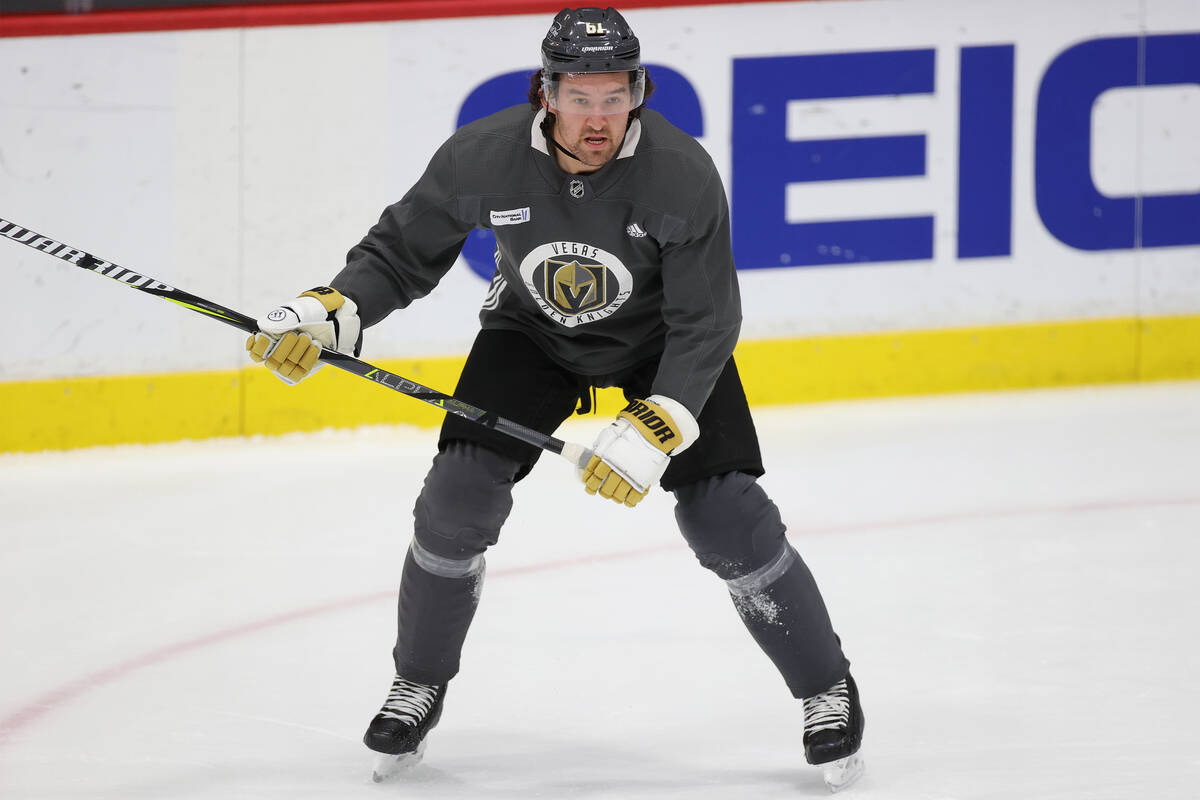 The Golden Knights received a welcome sight before their morning skate began Tuesday.

Captain Mark Stone opened the doors in the corner of the team’s practice rink at City National Arena and joined his teammates. It was the first time he has skated with the Knights since getting injured in the second game of the season Oct. 14.

Mark Stone just came off a side rink to join the Knights morning skate.

Nolan Patrick is not out here, or any other injured players. pic.twitter.com/hL9T7hPcHH

Coach Pete DeBoer said the 29-year-old right wing “is not close to playing yet, but it’s a great first step.”

“The finish line is still a ways out, but it’s a boost for us coming off the road with some of the things we’ve dealt with just to see some of these guys around and looking better than when we left,” DeBoer said.

Stone suffered an undisclosed injury in the second period of a 6-2 loss to the Los Angeles Kings and hasn’t appeared since. He did skate on his own Oct. 29 at City National Arena.

Stone was the Knights’ leading scorer last season with 61 points in 55 games and is considered one of the NHL’s best two-way forwards. He’s one of five Knights on injured reserve, along with centers Jack Eichel and Nolan Patrick, left wing Max Pacioretty and defenseman Zach Whitecloud. Center William Karlsson is also injured after breaking his foot Oct. 29 against the Anaheim Ducks.

Stone was the first to start skating with the Knights again.

“He’s our leader, he’s our guy,” defenseman Dylan Coghlan said. “Anytime he comes back from an injury that long, it’s nice to see. It kind of gives you a little extra jump on the ice and a little bit more excitement.”

DeBoer said Patrick, who has missed the past eight games with an upper-body injury, is skating on his own, but he doesn’t know when he will be ready to play.

Paul Cotter’s mother found out he was making his NHL debut before he did.

The left wing walked into the City National Arena locker room Tuesday morning, saw the whiteboard and texted his mom to let her know he would be in the lineup against the Seattle Kraken. But Knights director of hockey administration Katy Boettinger had already told her so she and Cotter’s father, brother and sister could make it to T-Mobile Arena for the game.

Cotter, 21, is the fifth player on the team to make his NHL debut this season, along with left wing Pavel Dorofeyev, center Jake Leschyshyn, right wing Jonas Rondbjerg and defenseman Daniil Miromanov. The 2018 fourth-round pick had two goals in eight games with the Silver Knights.

“It’s a very unorthodox path,” Cotter said. “I wouldn’t change it. I’ve been in a lot of cities, a lot of different places, a lot of coaches. I have a lot of buddies because of that. It’s been weird, but it’s been good for me basically moving up a level each year.”

Tuesday’s game against the Kraken was the first of four available exclusively on the streaming services ESPN+ and Hulu this season.

The remaining games are Dec. 3 at Arizona, Feb. 1 vs. Buffalo and March 17 vs. Florida. They’re part of the NHL’s national TV contract with ESPN that started this season.